Visiting and skiing with a climbing brother in a hidden corner of the world. 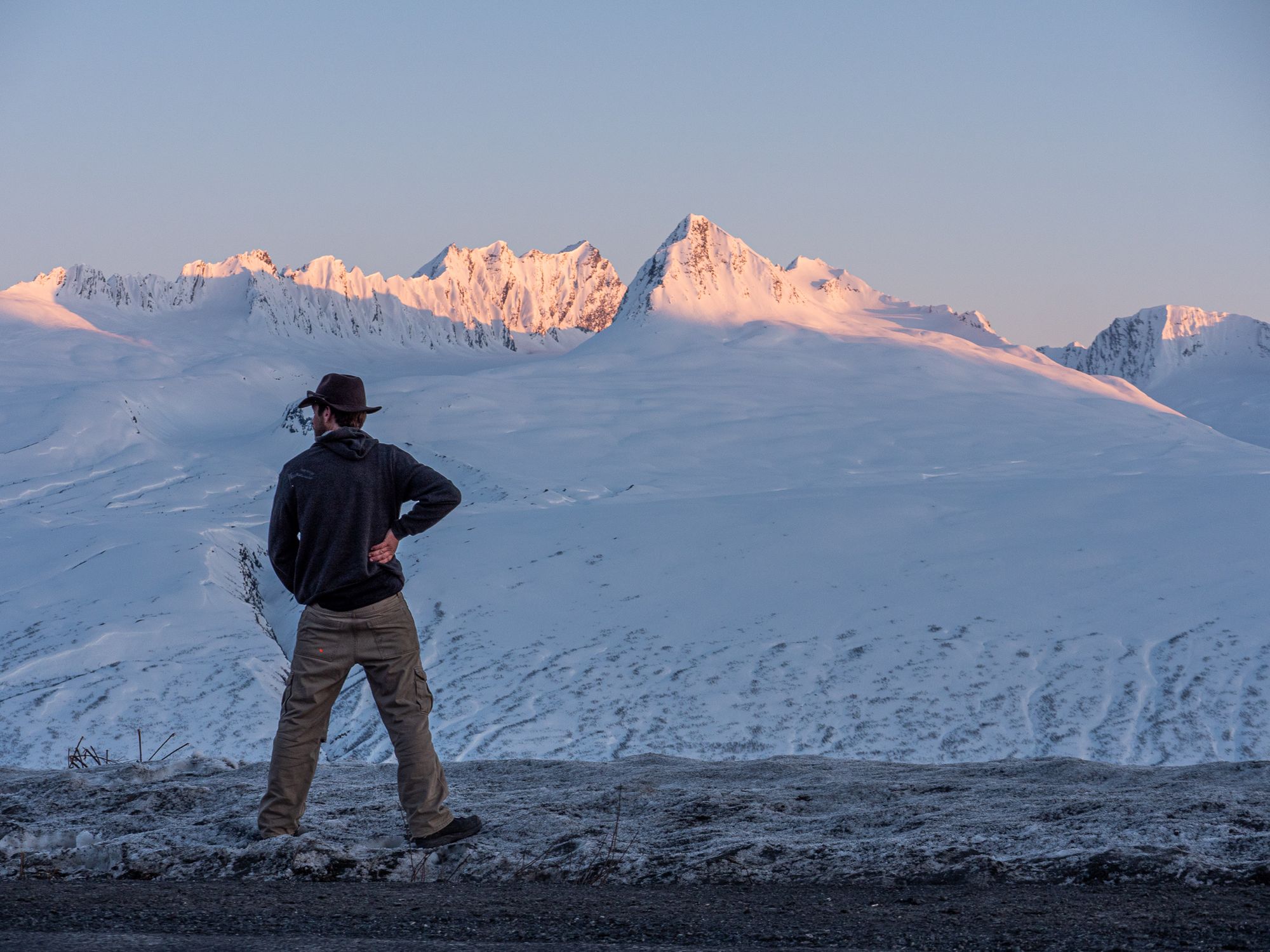 A quick flight out of Anchorage awarded me a proud first: first of Reese's climber friends to take him up on an offer to ski out of his home in Valdez, Alaska.

After I arrived, I asked Reese about these huge alpine lakes all the glaciers I flew over were feeding into. "Alpine lakes? Dude, that's the ocean!" The scale of these mountains straight from the sea was pretty mind boggling.

The man himself picked me up from the airport. We went into town to grab a beer, which turned into a few pitchers and many pizzas as more and more friends of the man showed up. So, I had a welcome party right from the get-go. Small towns, right?

From there, we got to enjoy the sunset on the Chugach as we drove up to Reese's abode.

Every mountain we drove under had a name, and had been under Reese's skis. He pointed out each one and called it out, remembering winters past as we went our way.

At the top of the pass we stopped to appreciate the last of the light, kill a road soda, and empty our bladders.

Conditions ended up as shit for most of my stay in ... well, all of Alaska (as far as skiing's concerned, that is!) Valdez was the same, but we went out to test things anyways.

Reese, his buddy Bruks ("Brooksy"), and two other locals all got out for an afternoon up-and-down of Schoolbus. The approach was as steep as things can get without cutting switchbacks. Sun-affected snow made goings tough - oh, and so did my avalanche PTSD. More on that here, but the tl;dr was that getting back on my planks was a very (mental-)healthy thing for me to do.

The sun went away just as we started downhill. The flattest of lights decimated any chance of a good ride down, but with a crew like that, nothing was going to stop us from having a fun trip down.

Reese's cabin (house? cabin? house?) has what may be... the most obscene view a house can have.

The insides were a bit magic too, particularly for me. The first of my photos to ever be manifested in the real world hangs in Reese's house. I was shocked to see how large it had been printed, and proud to see it in such prominent placement on the wall.

The last bit of magic at Reese's place happened at night. Somehow this lovable goof has rooted himself as a pillar of his tightknit and beautiful community. Every evening, in ones and twos and threes and fours, Reese's neighbors would gather. One night we came home late only to discover a dozen people had posted up and spontaneously had a pizza party in Reese's house in his absence - we came home to a party in full swing.

The humans up in this remote little bastion of un-civilization were beautiful. In a few nights I felt like I'd made half a dozen new best friends, people I'd surely be seeing again soon...

As for the host of the ages, it wouldn't be long at all. Reese was destined to meet me in Squamish at the end of May for Nate and Jenn's wedding.