Disa, Disa and I lived it up in Barcelona the night I arrived. We tried to rally and climb the next day, but our hangovers won out. Instead, we tourested and enjoyed a brisk swim in the sea. 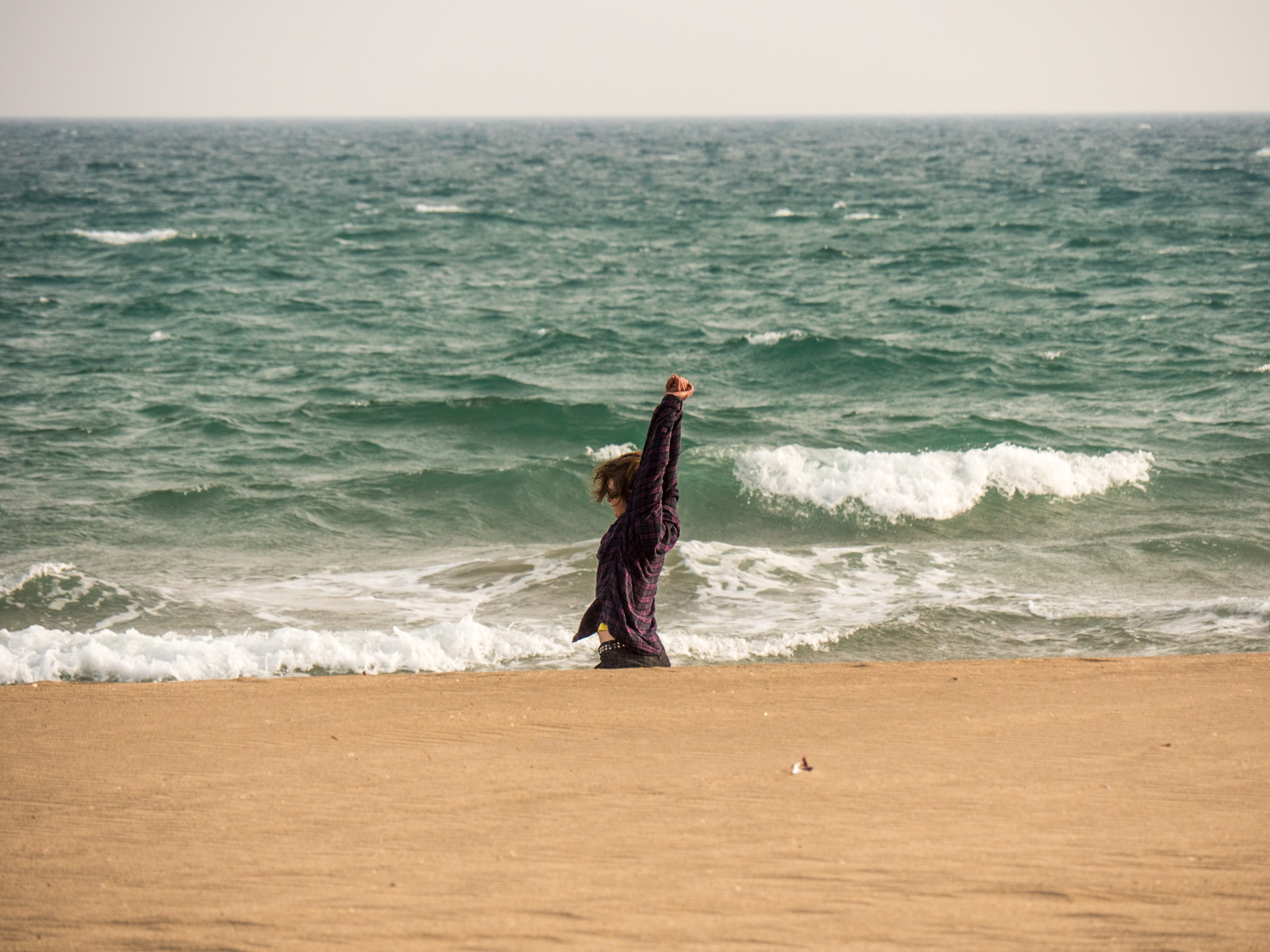 We dropped off one of the Disas at the airport in the evening, and then Disa (I'm not sure which one at this point) and I drove out of Barcelona and into the Spanish mountains.

Siurana was our home for the next week. The cliffs in the area boast over 1500 routes and create a breathtaking landscape, particularly from the top of the mountain, sitting on stones laid down by a Muslim empire hundreds of years ago.

In-between climbs we made friends: Chris and Chris from England, Joanne from Malaysia, Roberto the Guatemalan, Lise from Holland, Maron from Argentina, Steffi and Niel from Switzerland, Chris and Jack from Portland, Anders from Stockholm... Climbers are good people. Thanks for making our trip better guys.

We started the day at L'Aparador, where I worked out my nerves on Sorry Not Clean. The shade ended up being too cool that morning, so we moved over to the sunny side after just one route.

We moved on to L'Olla, which was a long row of very overhung climbs - mainly 7s and 8s. At the right end of the cave we climbed Mayling. It's a terrific route, with a great sequence through the third and fourth bolt and a strong, overhung finish. Went for the redpoint, but screwed up my feet on the finish. 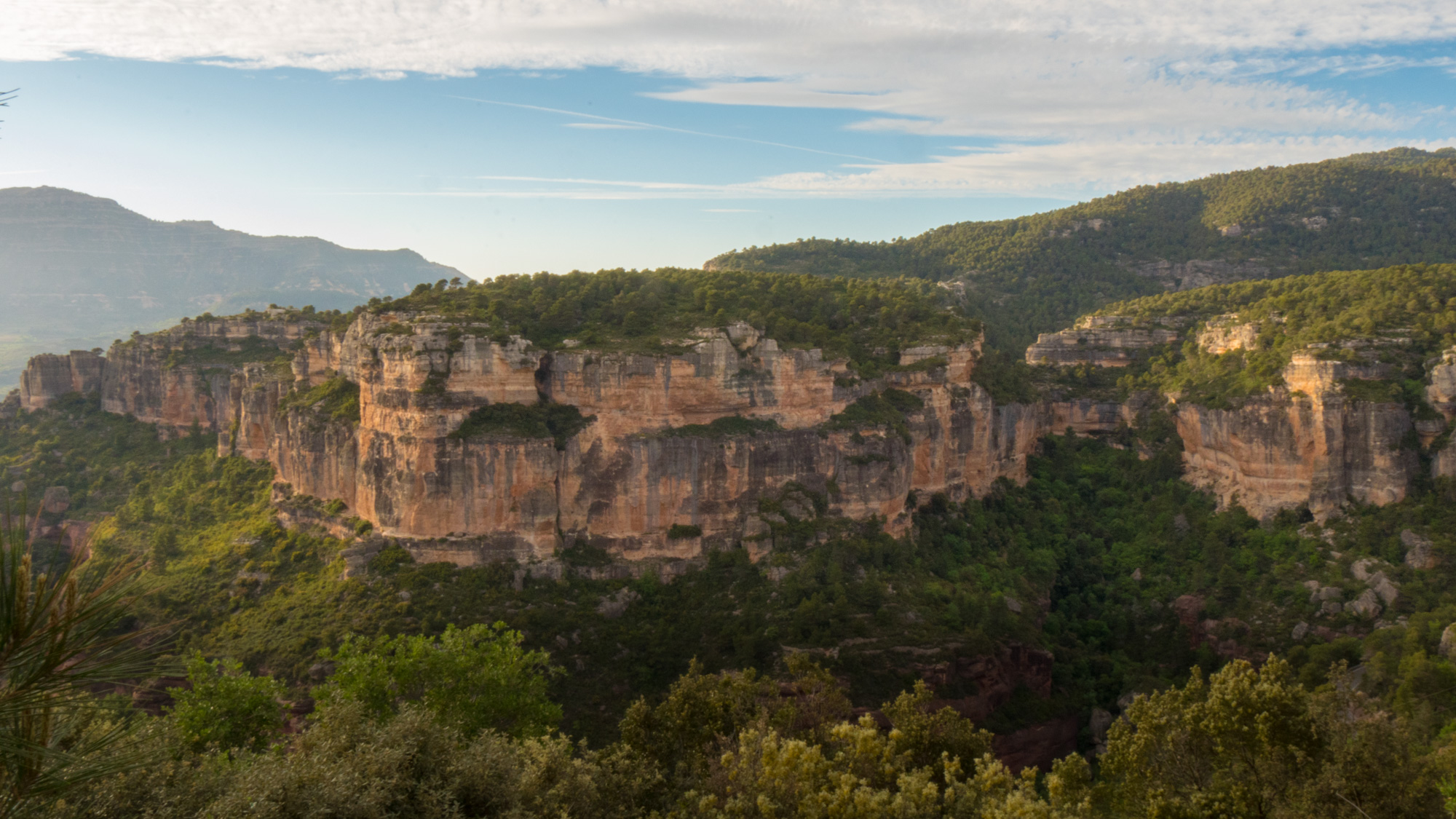 The furthest back area shaded in the right part of the photo above is L'Olla; Siuranella Est is the right portion of the tall wall in the middle.

After lunch we climbed at Siuranella Est, a place we'd end up coming back to time and again over the next few days. All the climbs there are fifty feet up the cliff on a small ledge, reached by a ladder of T shaped bars sticking out of the stone.

I started the morning feeling weak, but the afternoon got me warmed up and ready for more. We went to bed pumped to keep exploring.

Day 2: Can Marges, Can Melafots

Our second day we climbed down the other side of Siurana to Can Marges in the morning, where the sun eventually melted us away, but not after enjoying Extremoduro and Pixapins. 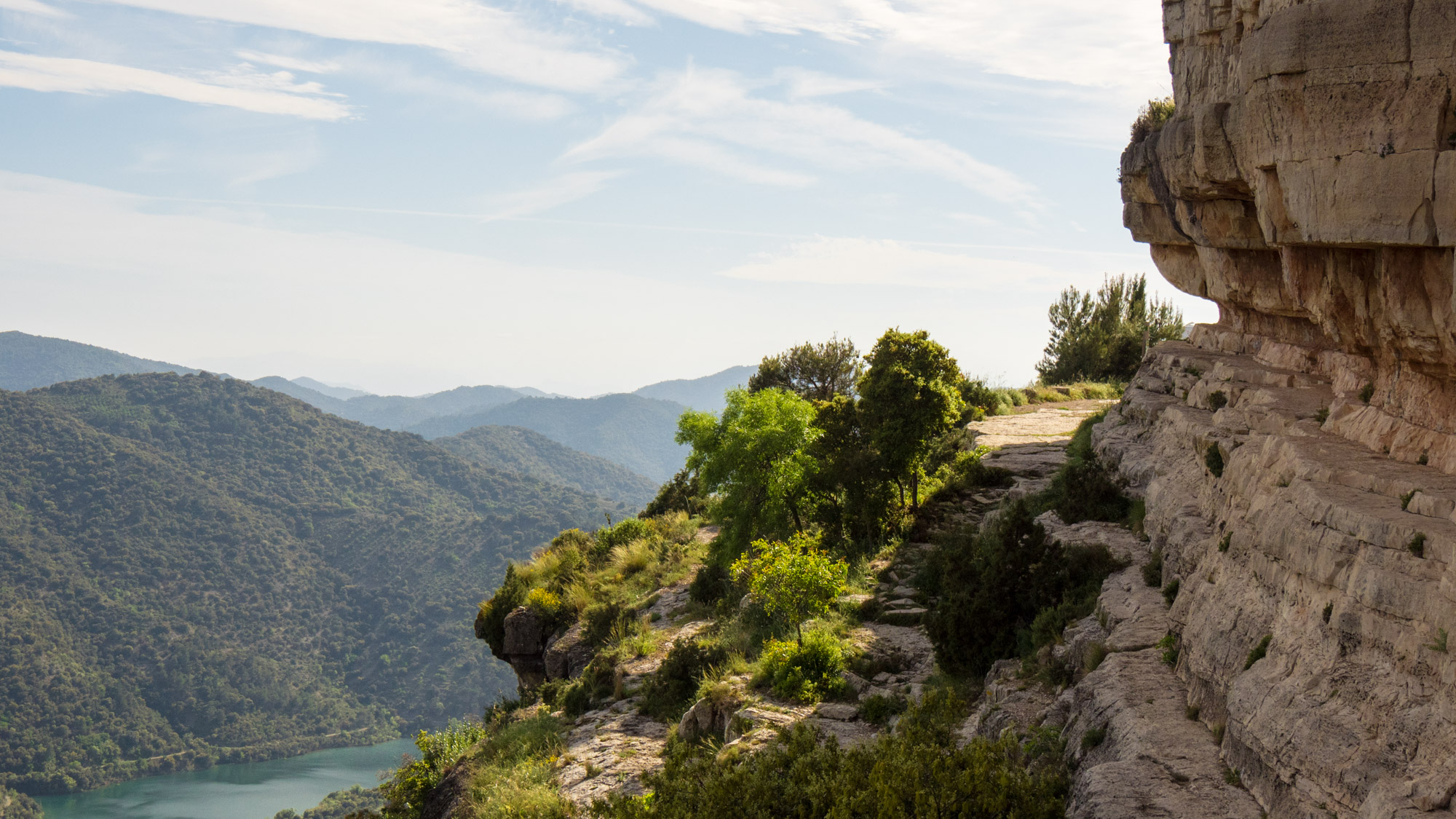 We walked towards the top of the mountain and climbed at Can Melafots next, enjoying the view along with the rock.

Here we climbed Gat raggae, Perseidas, and put up a toprope on Trigonometria for Lise and Maron who were climbing next to us. 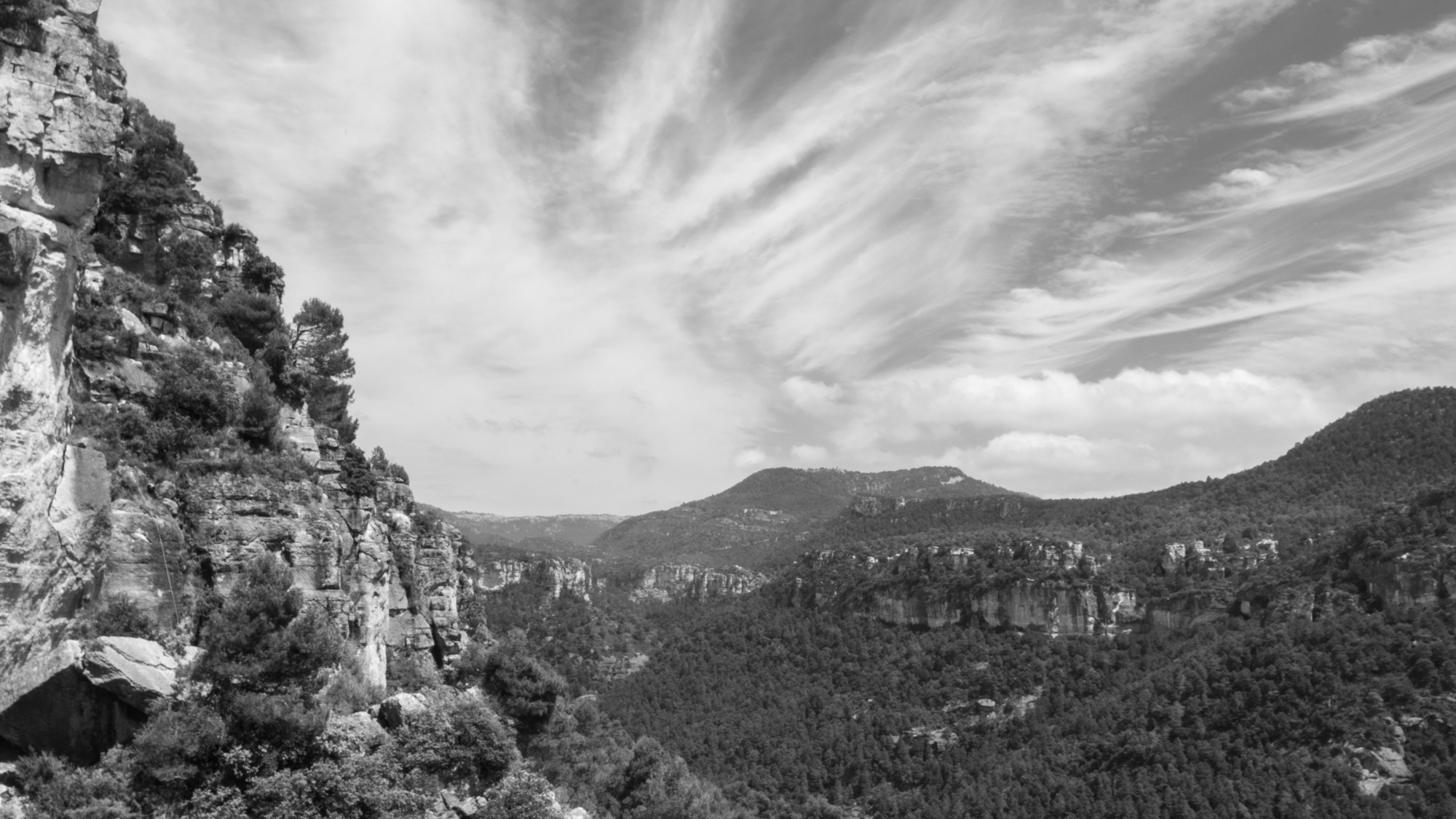 After climbing, we grabbed beers from the campsite and went back up to the top of the mountain, ready to enjoy the sunset. Lise and Maron joined us, and the four of us did yoga from the top of the world as the sun slowly set. 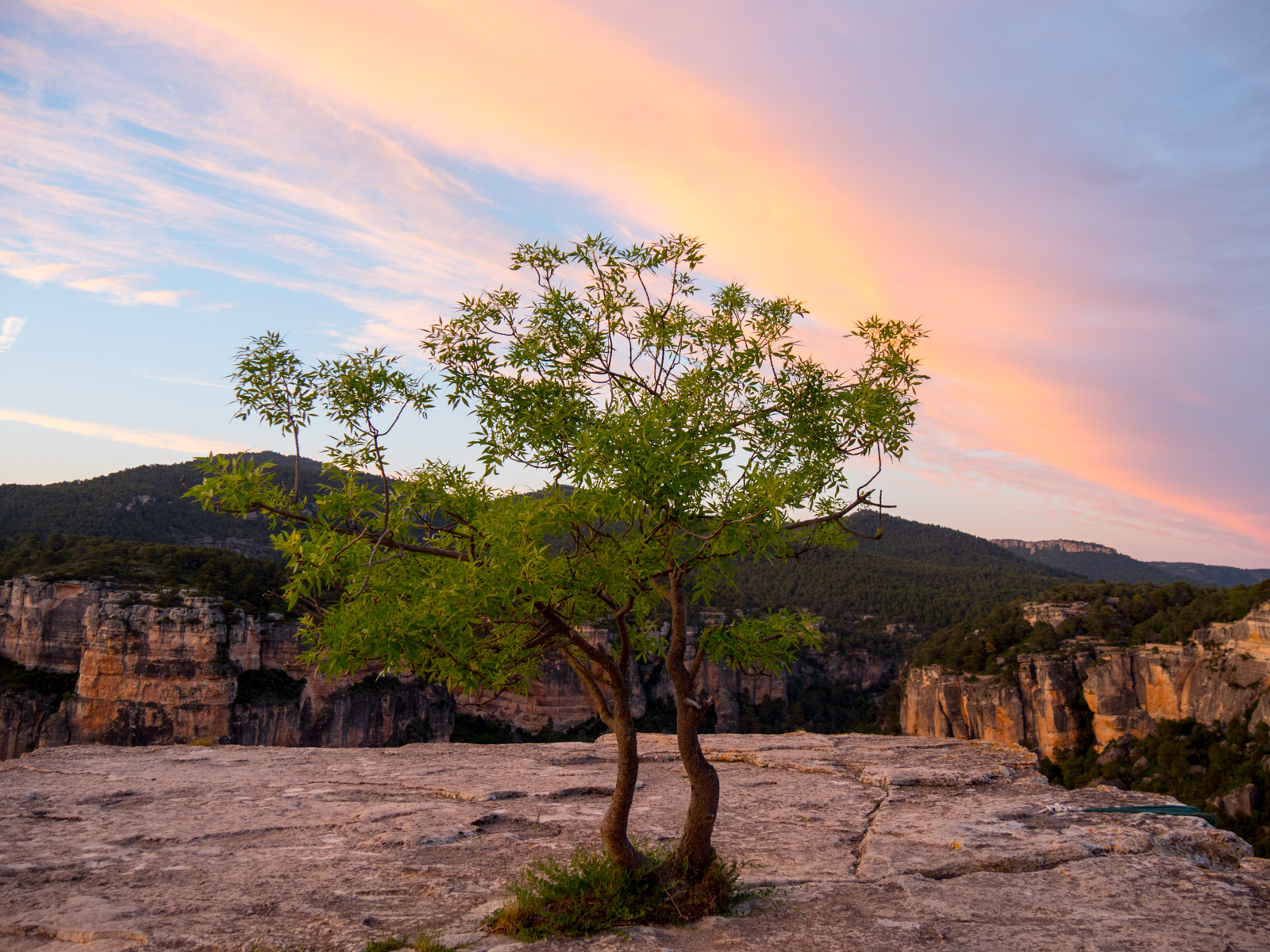 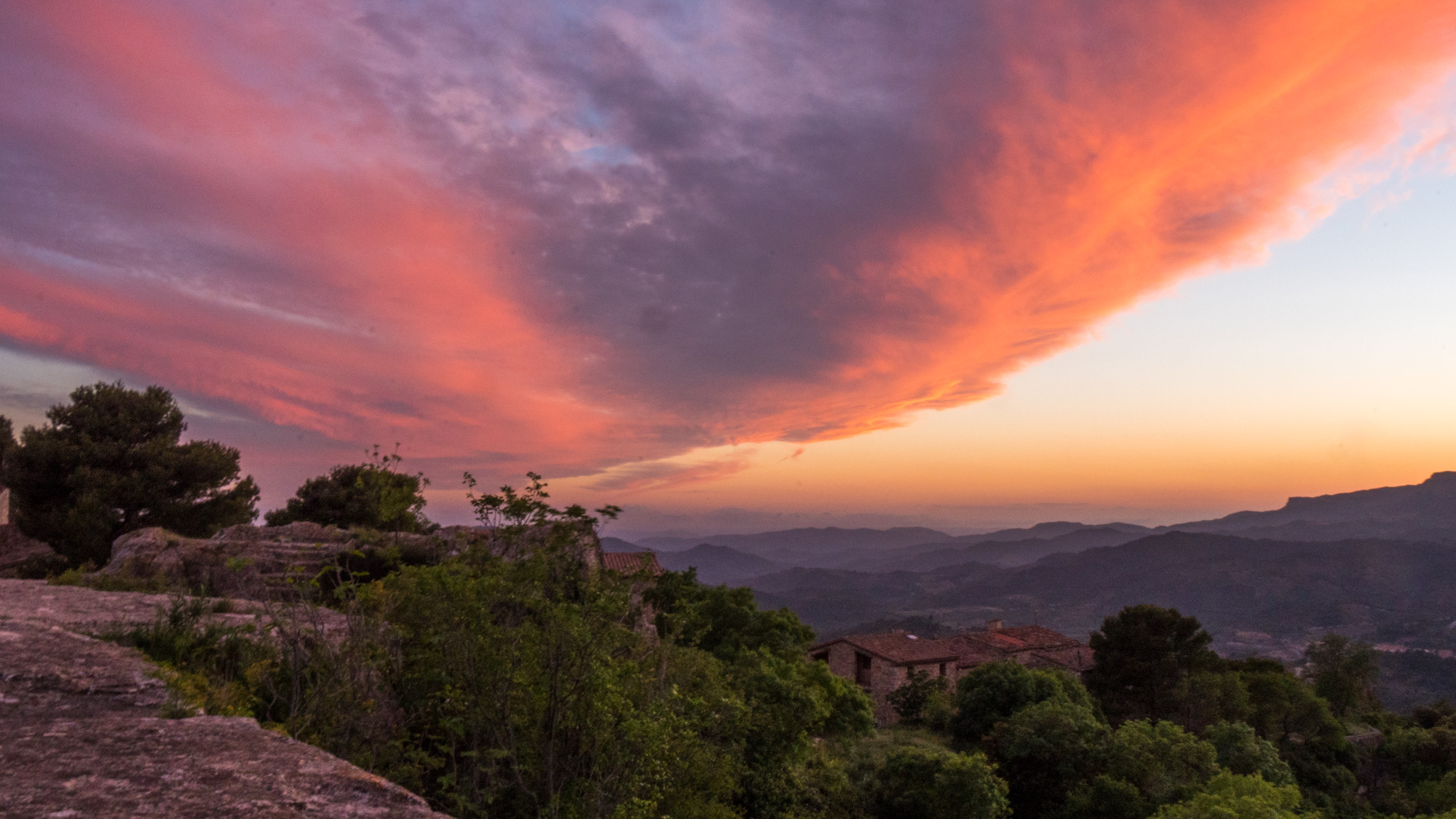 On the third day of climbing we walked around the mountain by the town and down to Reserva India with Lise and Maron. Disa and I had an amazing morning, with three great onsights in a row: Ojo Negro (wait, I didn't onsight that), Cherokee, and Navajos. Ojo was fun, Cherokee was a bouldering problem that required a rope, but Navajos... wow. 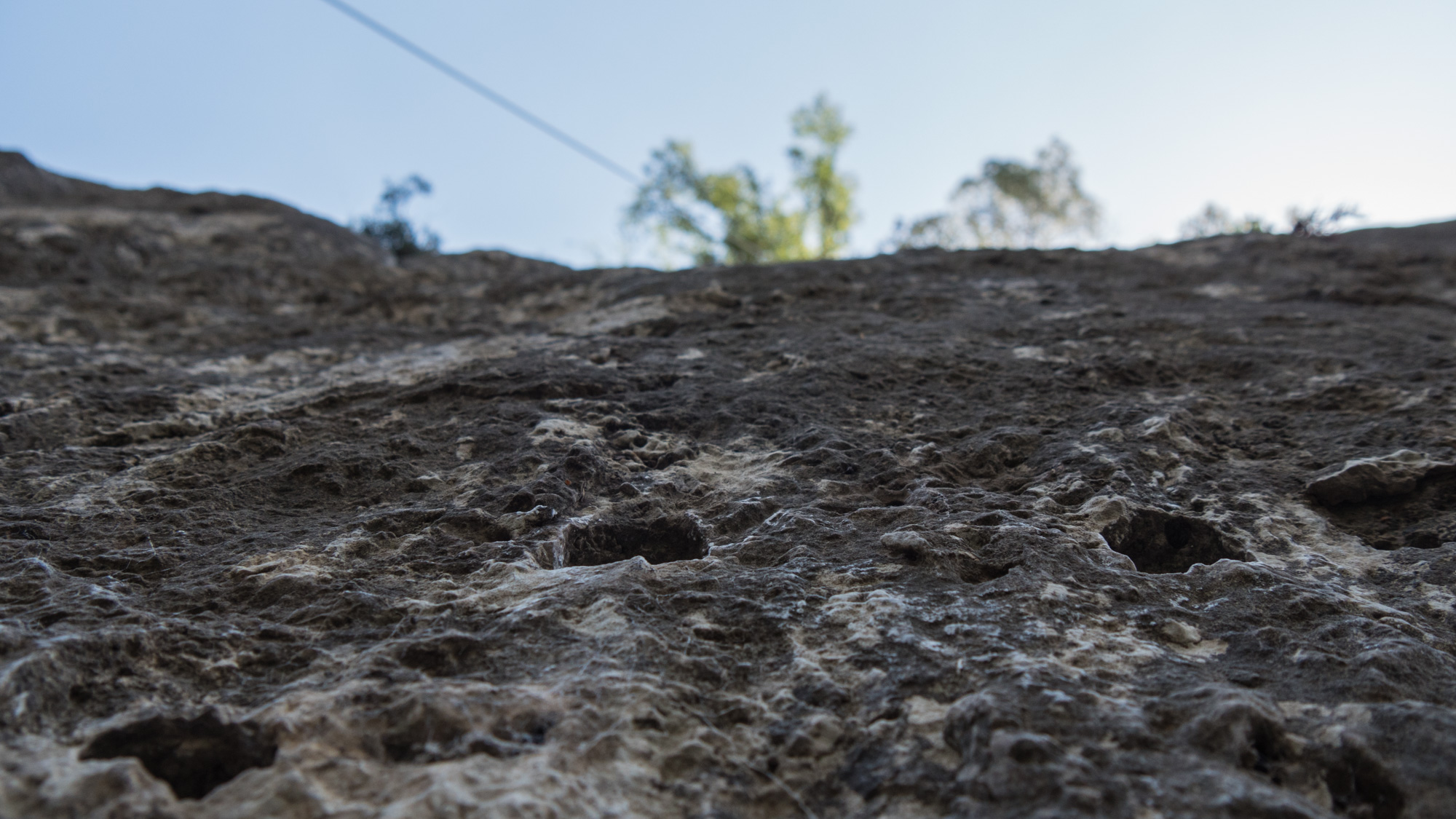 The first holds for Navajos

The route started on a slightly overhung power move, turned into a bit of a walk, and then gave you ten meters of crimps, slab, and mantling on those crimps. Every move felt like the one that was going to push me off the wall, but slow and deliberate - and a bit of luck - kept me on. Disa and I walked away from that morning knowing we were the hottest shit since Star Wars, and decided to go back to Siuranella Est and climb some 7s.

So I put draws up Lo mes negre, the hardest lead I've managed to date. It bucked me twice, once early on in some very sharp, very steep, very reachy moves, and again at what was the crux for me, transitioning from the overhang into slab. The latter half of the climb was in some ways a repeat of Navajos, so I was grateful to have practiced my crimp mantling earlier in the day.

Day three was a very powerful day for us.

Having climbed fifteen hard pitches in the last three days, we took the day off and lazed about camp with books and went for a swim in the reservoir at the base of the mountain. Disa and I enjoyed some skinny dipping and Anders came along for company prior to his siesta. 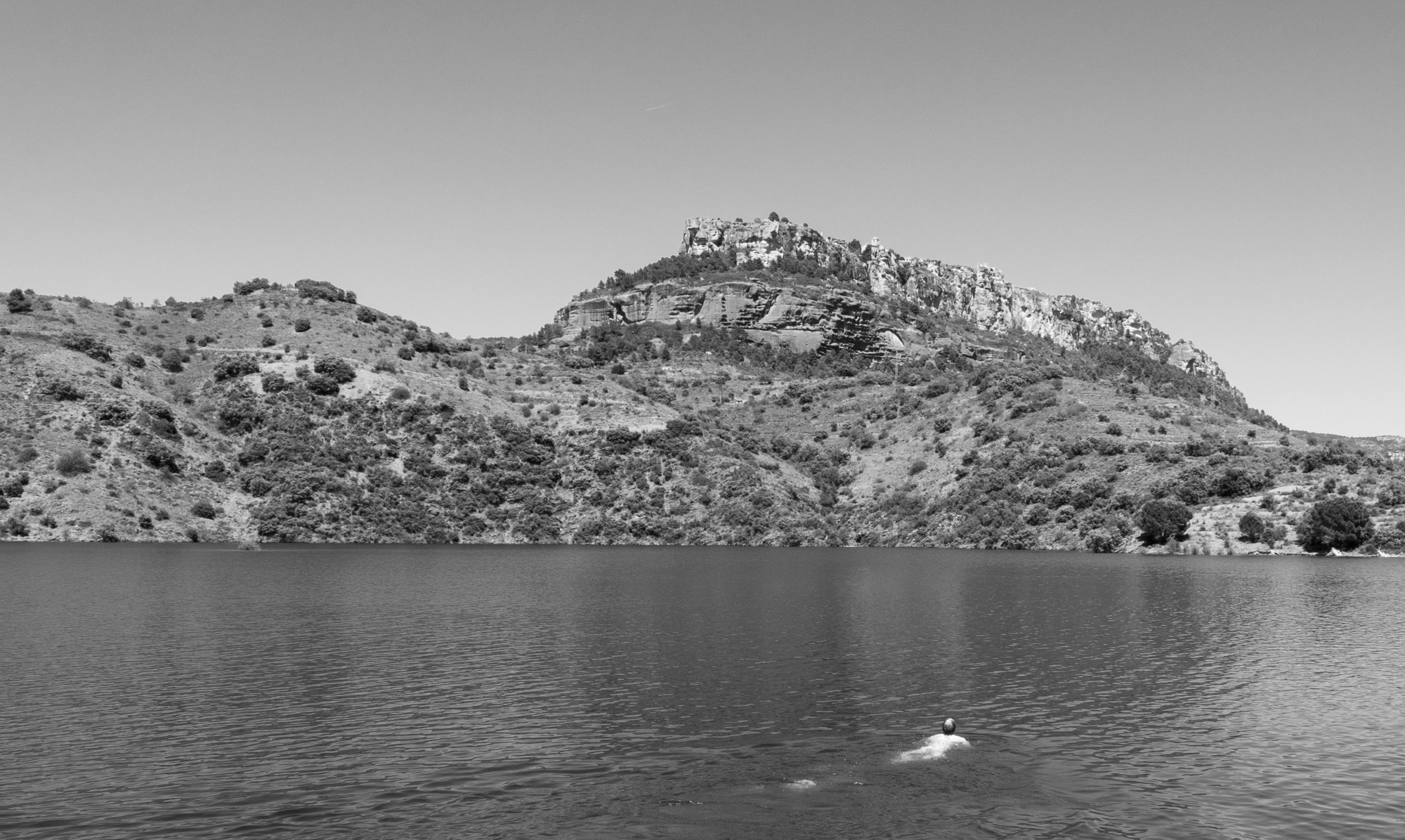 We passed our fifth morning climbing in the shade of Ca l'Onassis, where Disa had wanted to come back to redpoint Xurragen Panzer. I had a blast climbing Xurragen Panzer, then belayed Disa as she did a third 6b+, Paquiderm de goma. I passed, wanting to save strength for the afternoon at Siuranella Est. 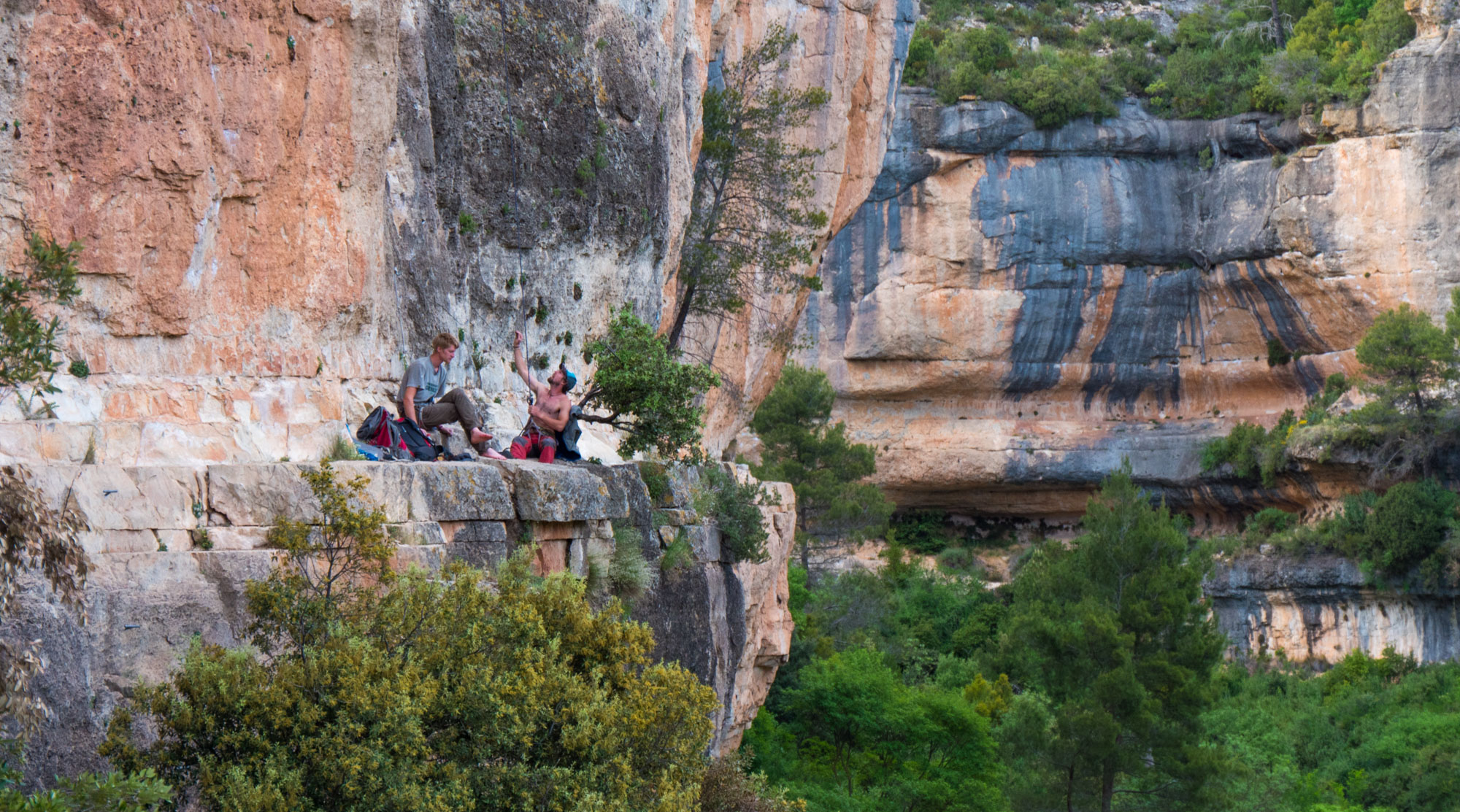 Chris and Chris belaying under Lo deje to blanco*.*

Back at Siuranella, we got on our second 7a, Lo deje to blanco. I fell at the overhanging crux as the climb went from 6a to 7a, but flew up it as soon as I got back on. Disa experienced the same thing. While we had waited for the 7a to open up, I also got the redpoint on D'estranquis.

Disa put up Pocapena which shared anchors with Lo mes negre, that first 7a that had been so hard. I followed her up, then set things up for a TR to work through the crux sequence on Lo mes negre.

What I hadn't thought about was, this would be my sixth climb of the day. My body could hardly TR up what I'd been able to lead two days ago, and everything seemed impossible. I almost wouldn't've believed I'd climbed it, let alone lead it, two days prior. 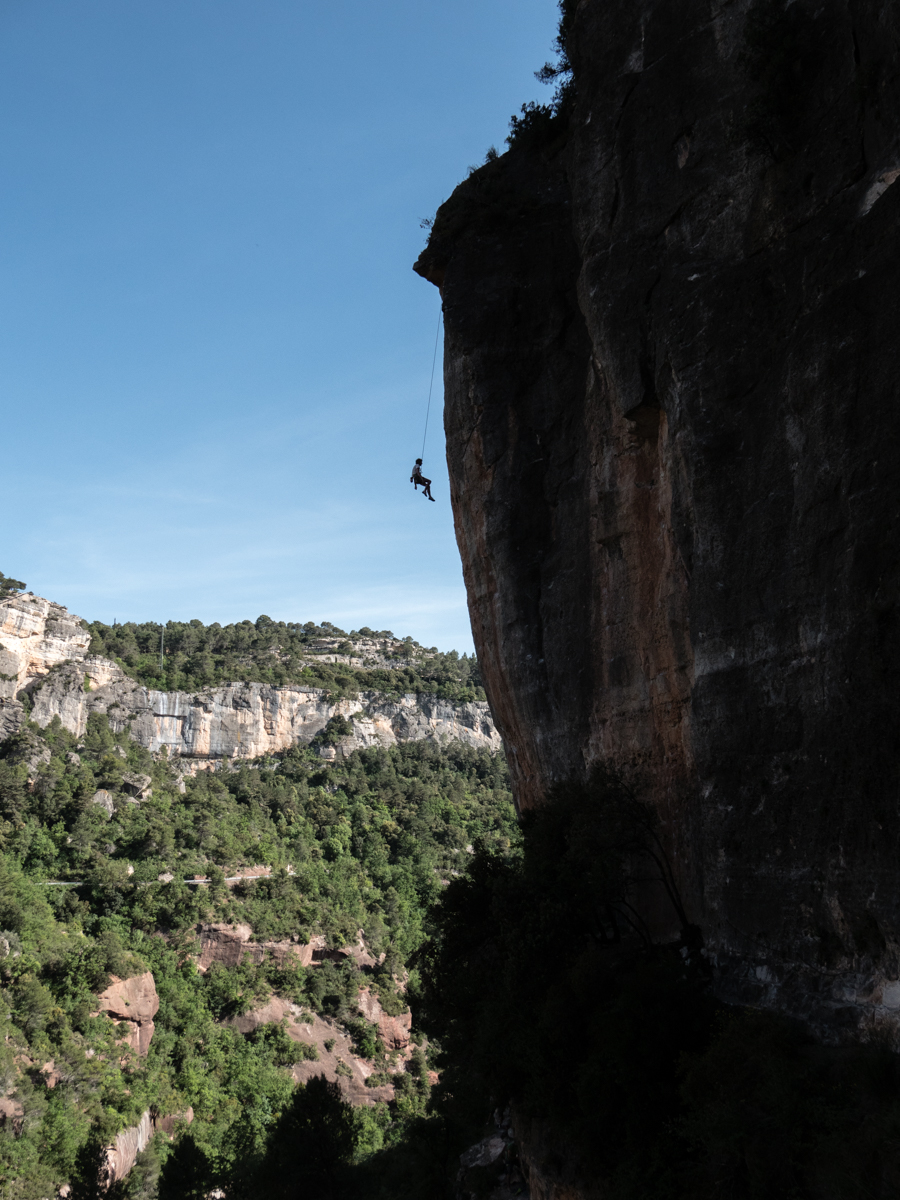 Jack lowering off of Ramadan*, 8a+*

This was our last day at Siurana. We packed in the morning, and went back to Siuranella Est to try the redpoint on Lo deje to blanco before we drove off to our next campground.

Neither of us quite had our groove on, so let's not talk about the so called RP attempts.

What we should talk about is the great climb we did afterwards, L'angelet. I gave it the redpoint attempt, but at the second crux I realized I had put the wrong hip into the wall. Curses! I took the fall and was still just as happy - it was a beaut of a climb.

We got directly in the car from the cliff and revved the engine towards Sant Llorenç de Montgai and a day of multipitch. The drive through the Spanish countryside as the sun set was unbelievable. Almost as unbelievable as the fact that we're still alive as I hairpinned every mountain road while distracted by the majesty of the landscape.

The temperatures soared up to 38 that day. Disa and I sat in the shade, drinking cool beer and staring at the rock wall we would be climbing once the sun was kind enough to head down. 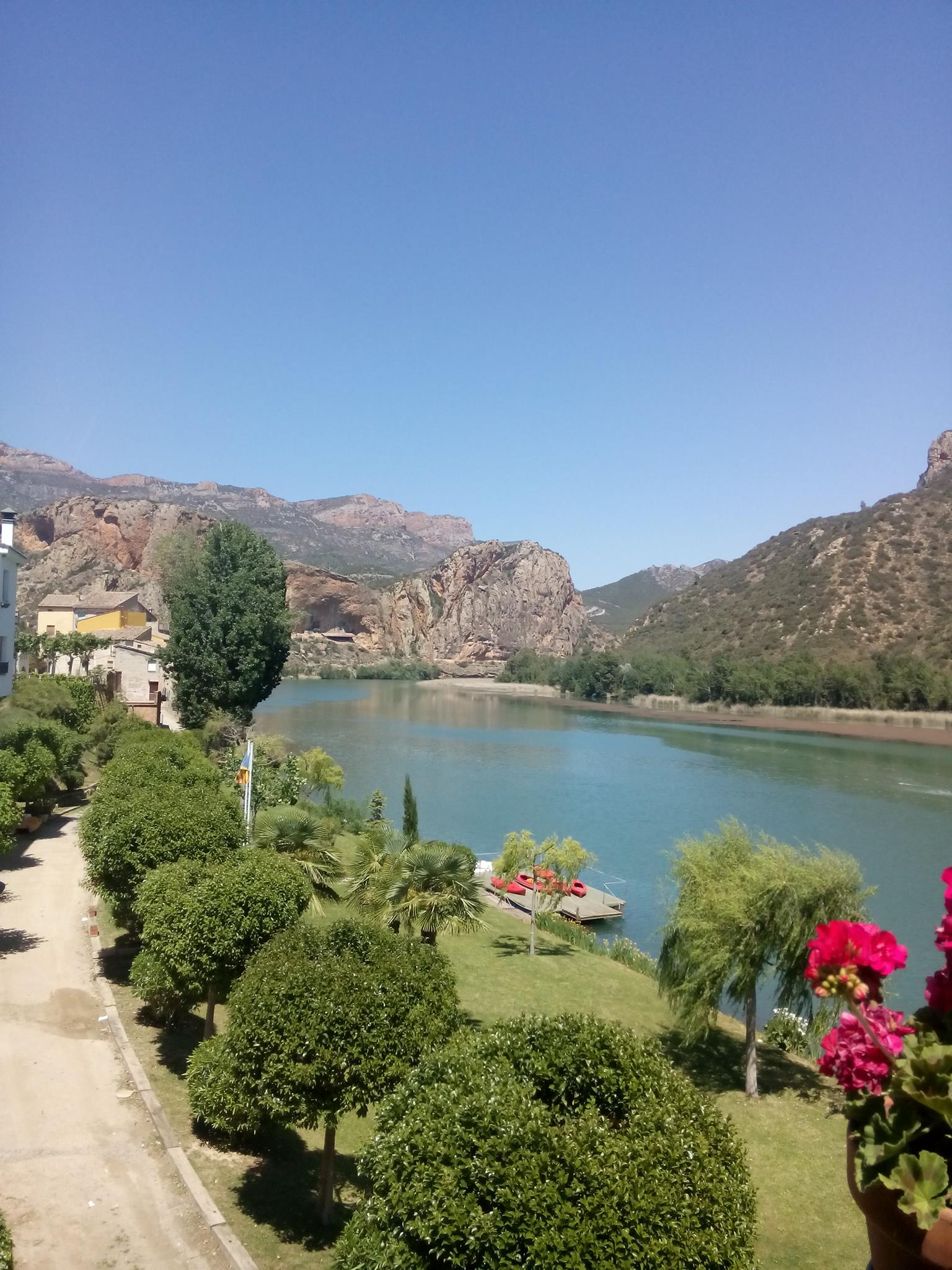 I can't tell you what we climbed, because we don't know. Disa had the crux pitch, and there were four total. We lost blood along the way but made it to the top without anything going horribly wrong. We gazed out from our 200m perch as the sun set on the tiny hamlet, then hiked down and out.

After a week of five pitch days, we were finally done climbing. We drove back to Barcelona the next day and knocked back six espressos and a bottle of chilled wine at a cafe on the beach.

We played in the sand some, and watched the horde of kitesurfers out enjoying the strong wind. 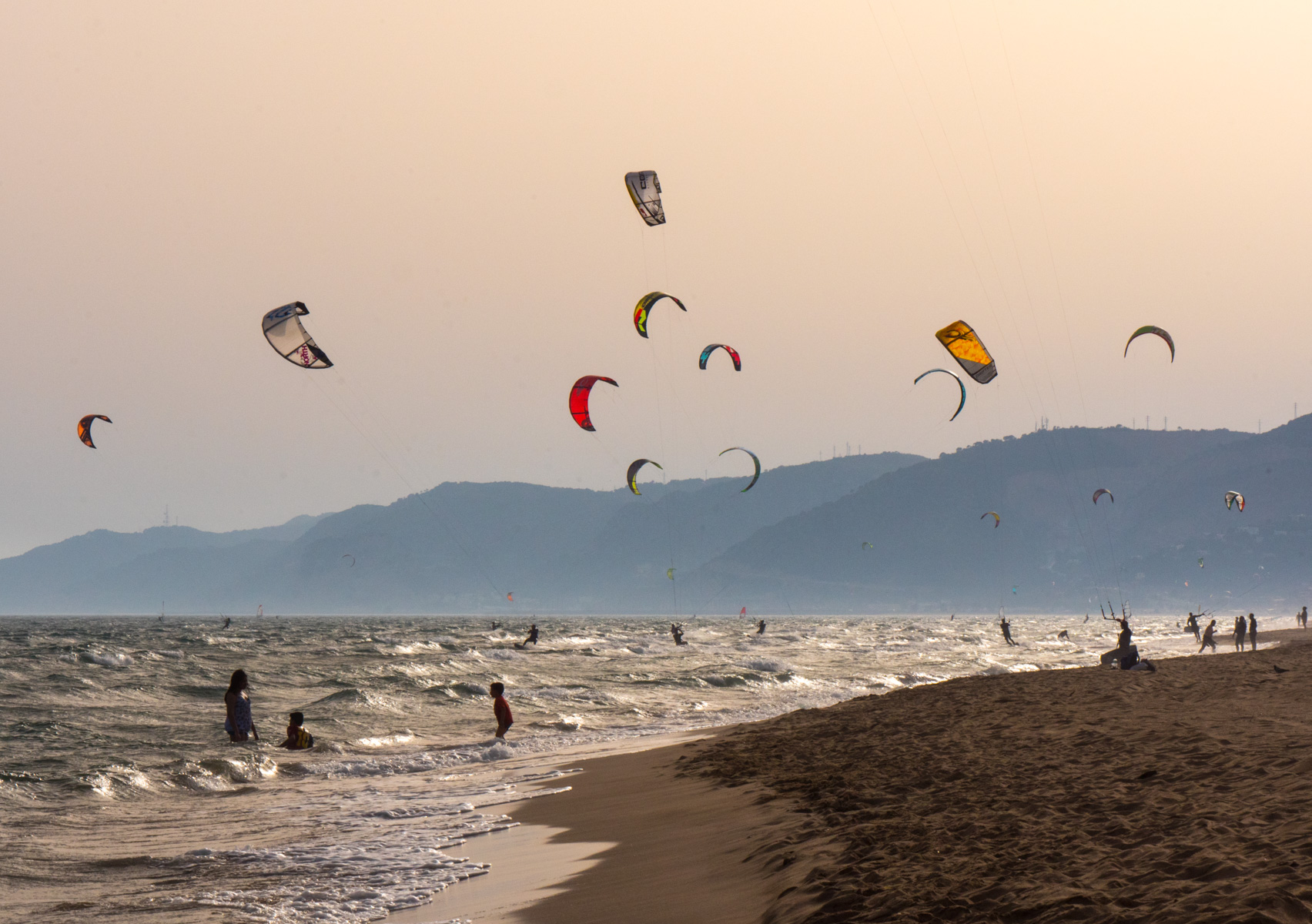 We set up our tent for the last time that evening, and in the morning I dropped Disa at the airport while I went and delivered the rental car back in Barcelona. I got the train to the airport, snuck into the VIP lounge to hang with Disa until her flight left, then got drunk waiting for my own flight. 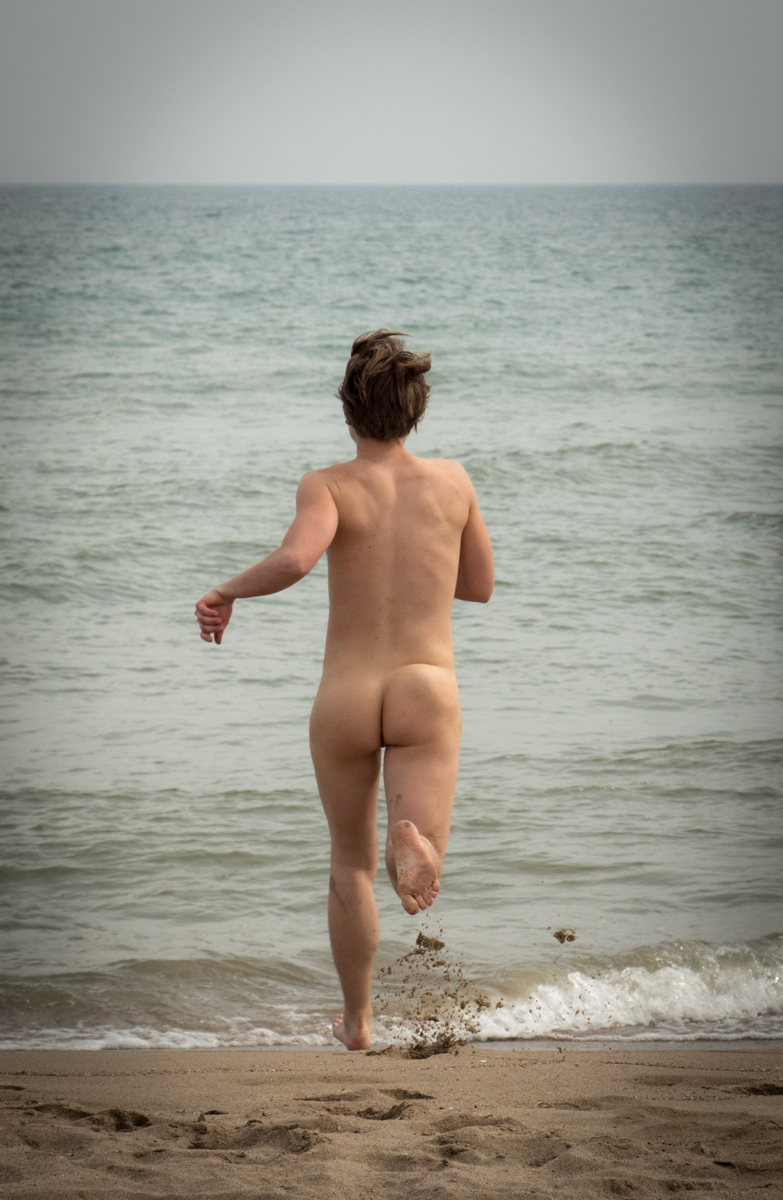 And more or less, that was my trip to Spain.