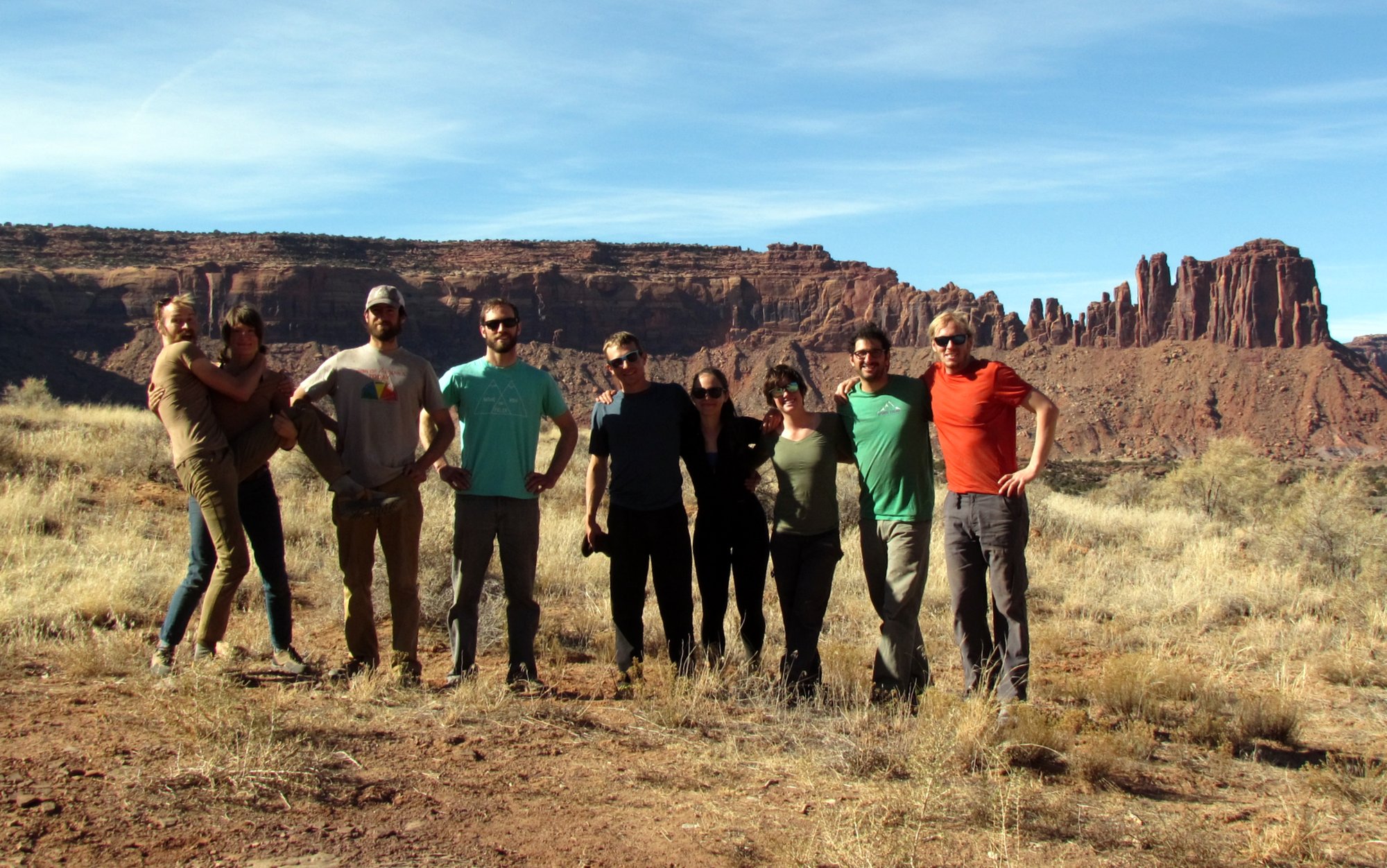 Cover: The Crew, left to right: Jack "Link", Patty, Reese, Nate, Matt, Lil, Em, Dave, and Matt #2. Thanks to Dave for making us stop and take this photo.

Ah man, ah man, Creeksgiving. I got to spend a week finding out if I was a crack climber alongside Dave and the best Creek Crew a climber could ask for.

Thanks for the hookup on the crew and the company on the drives, Dave. Thanks to everyone for inspiring me on both ends of the rope and letting me eat and drink far more than a person ought. 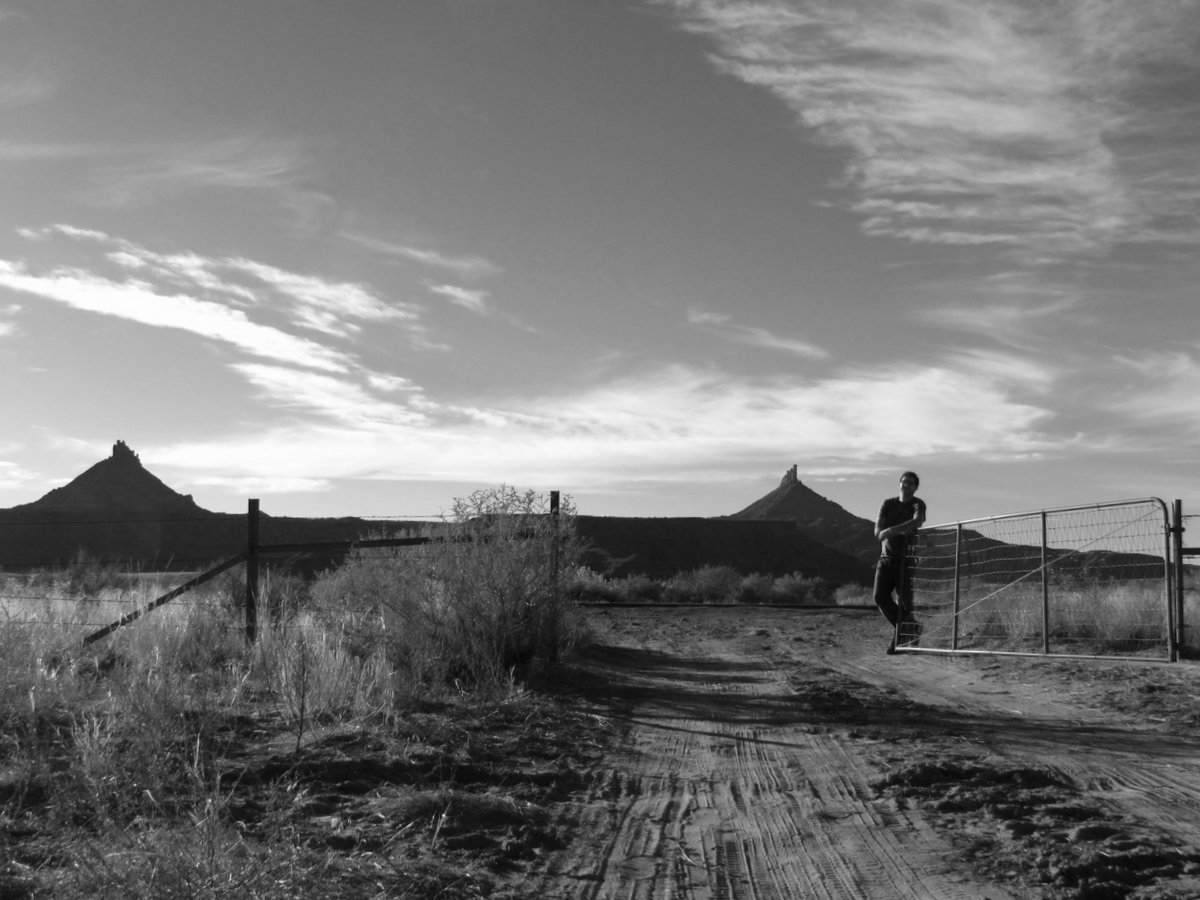 Creeking with the Crew

Our mornings had a relatively late start, but when you're living climbing there's no need to rush. We did group breakfasts, and usually went through four or five french presses before everyone had properly gotten their caffeine buzz and cleared out last night's dinner. 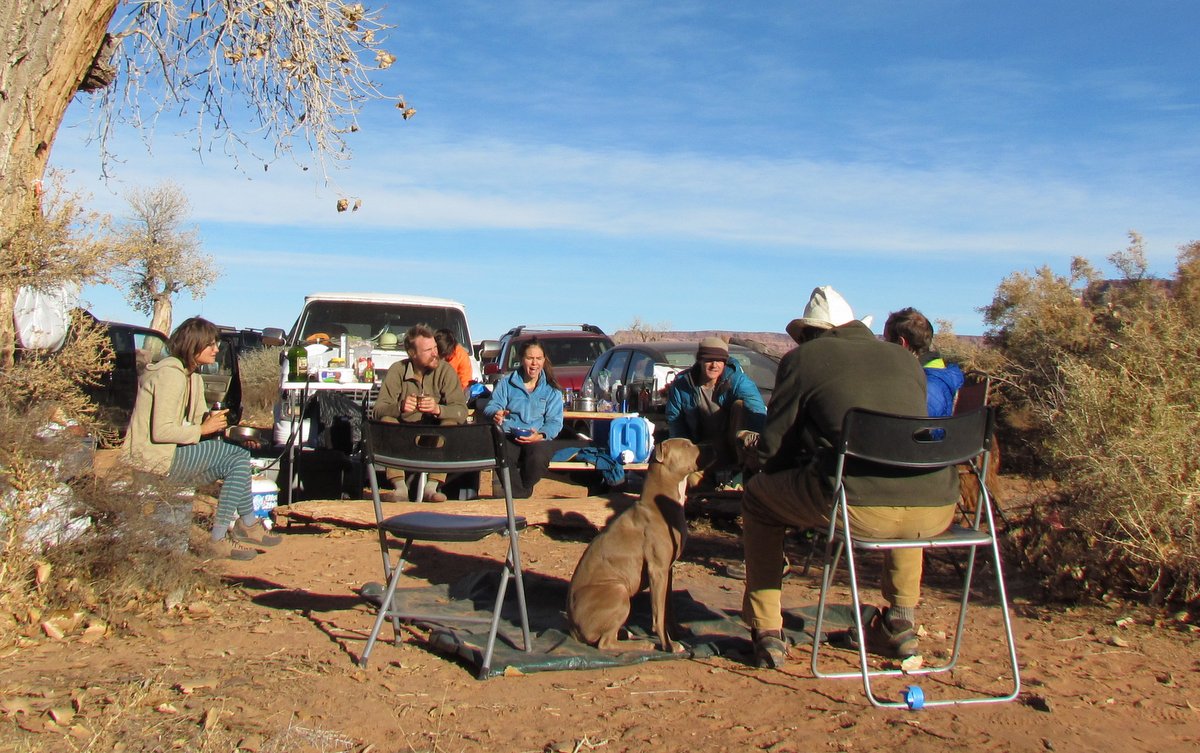 Coffee and communal breakfast weren't our only morning habits.

There's also things like what happens after you've had too much coffee. Lots of us spent time staring at this wall in the Superbowl "memorial shitter". Sometimes a guitar would get picked up and played while the rest of us were putting ourselves (or breakfast) together. 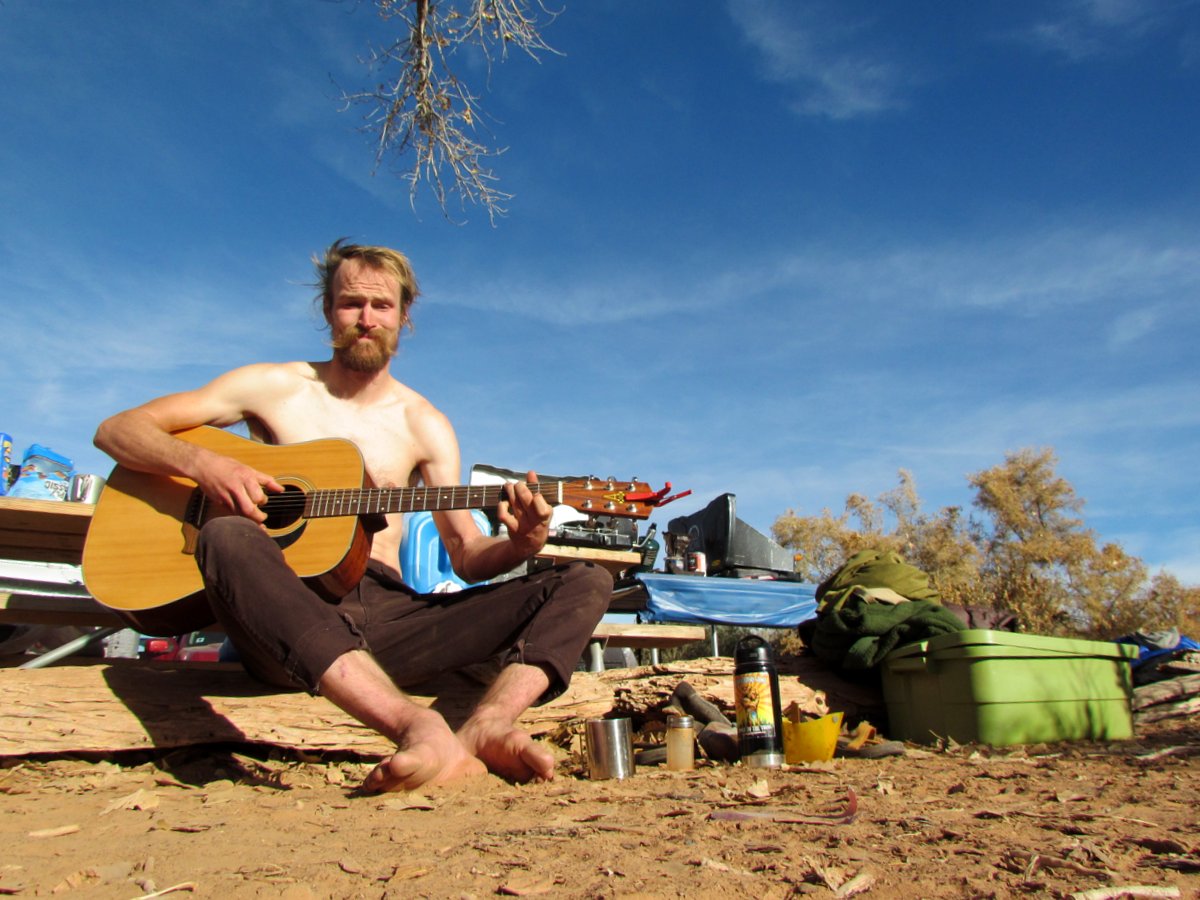 You also can't get this many climbers in one place without some impromptu yoga seshes. 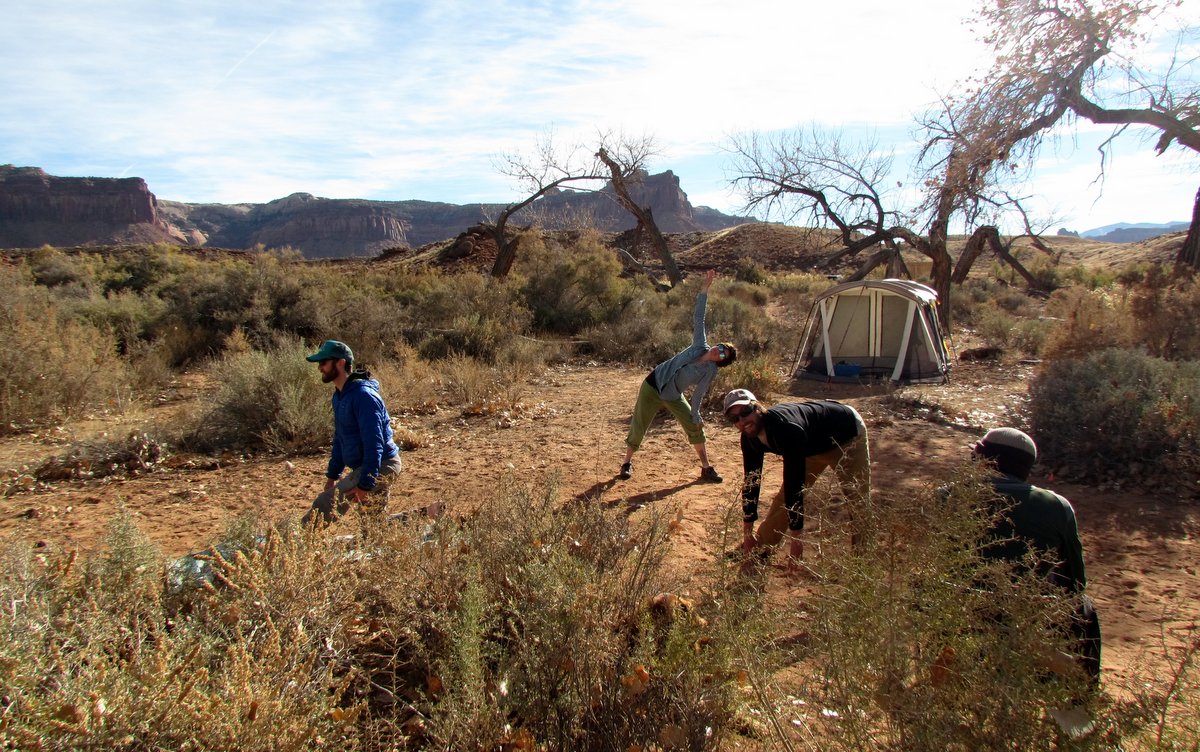 Matt Steel also found the morning to be a great time to pick at and snack on ticks. Or at least, I'm pretty sure that's what this is a photo of. 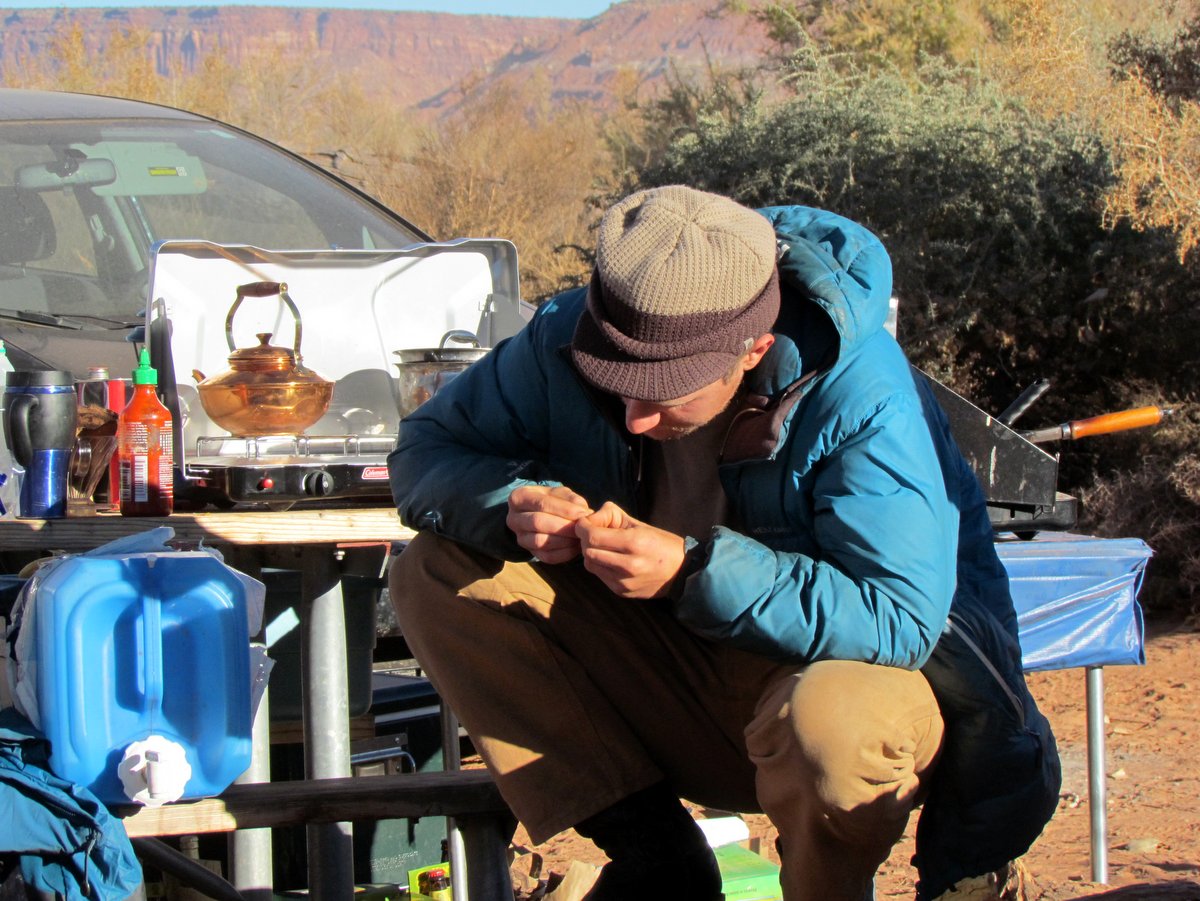 Our evenings were spent circled around the campfire, where we heard rousing renditions of classics from stars the likes of Drunky Cash and Matt Steel and the Dirty Dicks. 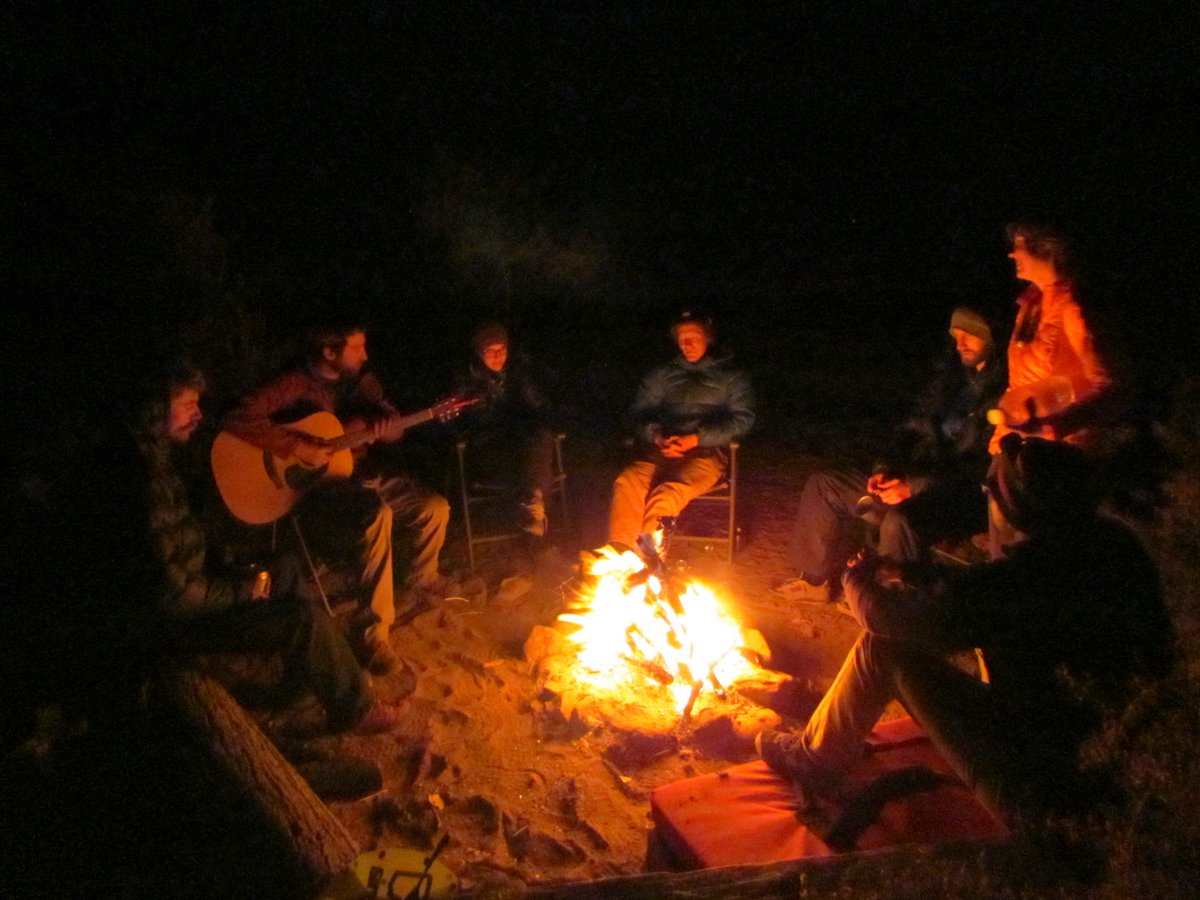 Brendan (not in the group photo, but all the way left in the fire ring) and Reese had gone out and cut down a tree for wood. The fires blazed warm and bright on chilly desert evenings.

On one occasion, we were approached by a deputy sheriff and told our singing was too inappropriate for our middle of nowhere desert campsite (ah, Utah). Or, so I was told the next morning - I wasn't there.
Well, I was there, but I wasn't there. Y'know. 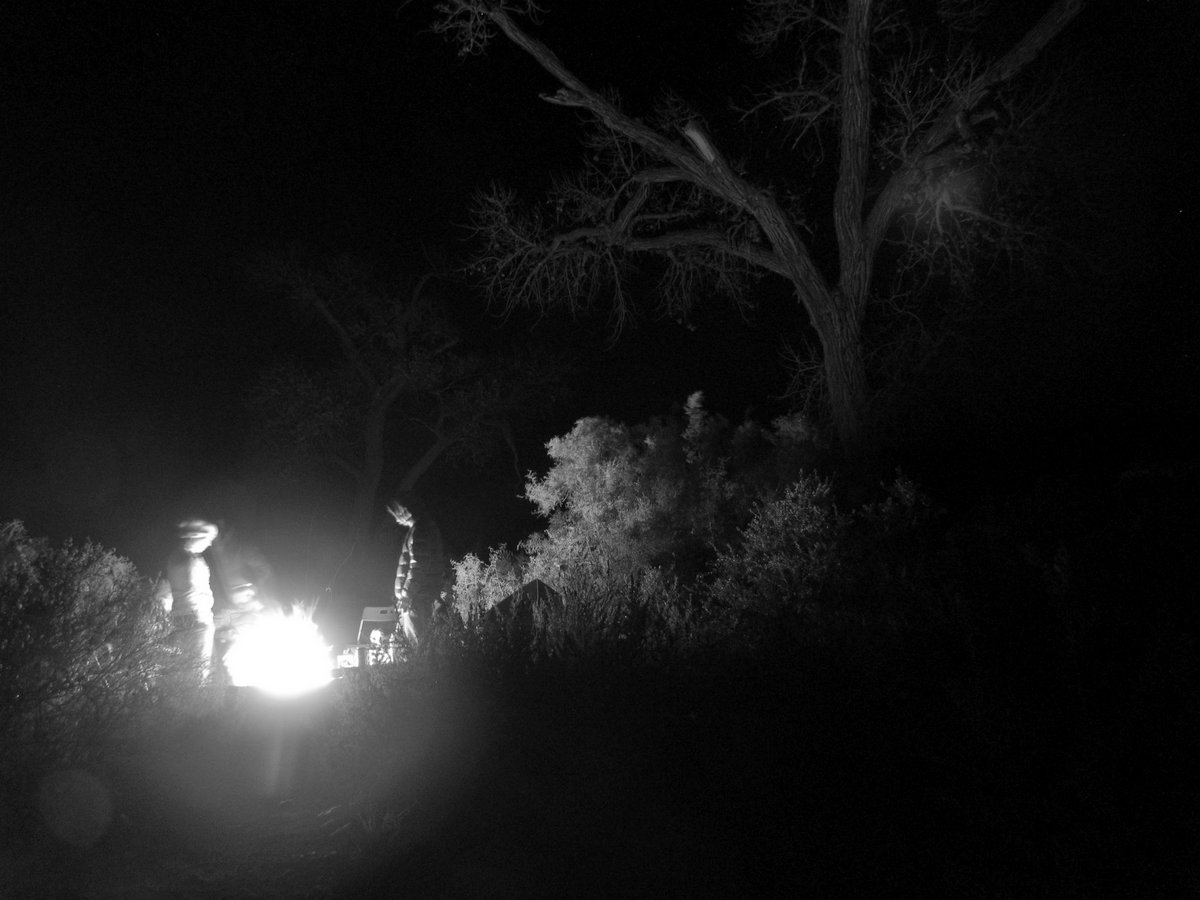 Our crew was large enough that we had to think hard about where we were going to climb each morning. The nine of us were enough to max out any of the smaller walls. While that sounds like a negative, it actually ended up working strongly in our favor. The Creek was incredibly crowded during Thanksgiving, yet we always had the walls completely to ourselves. 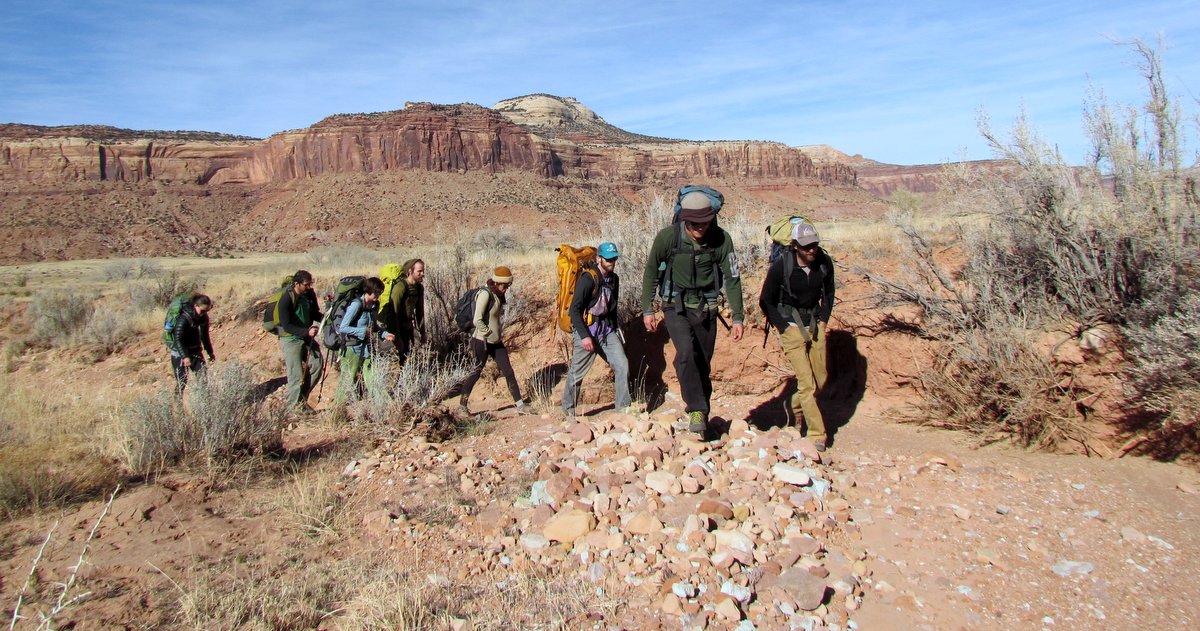 The Crew inspired me to new heights (hey, that's pretty literal) and gave me a veterans tour of the Creek, for which I'm grateful. But the best thing was, we got along back at camp even better than we did at the wall. These bitches knew how to have a good time. 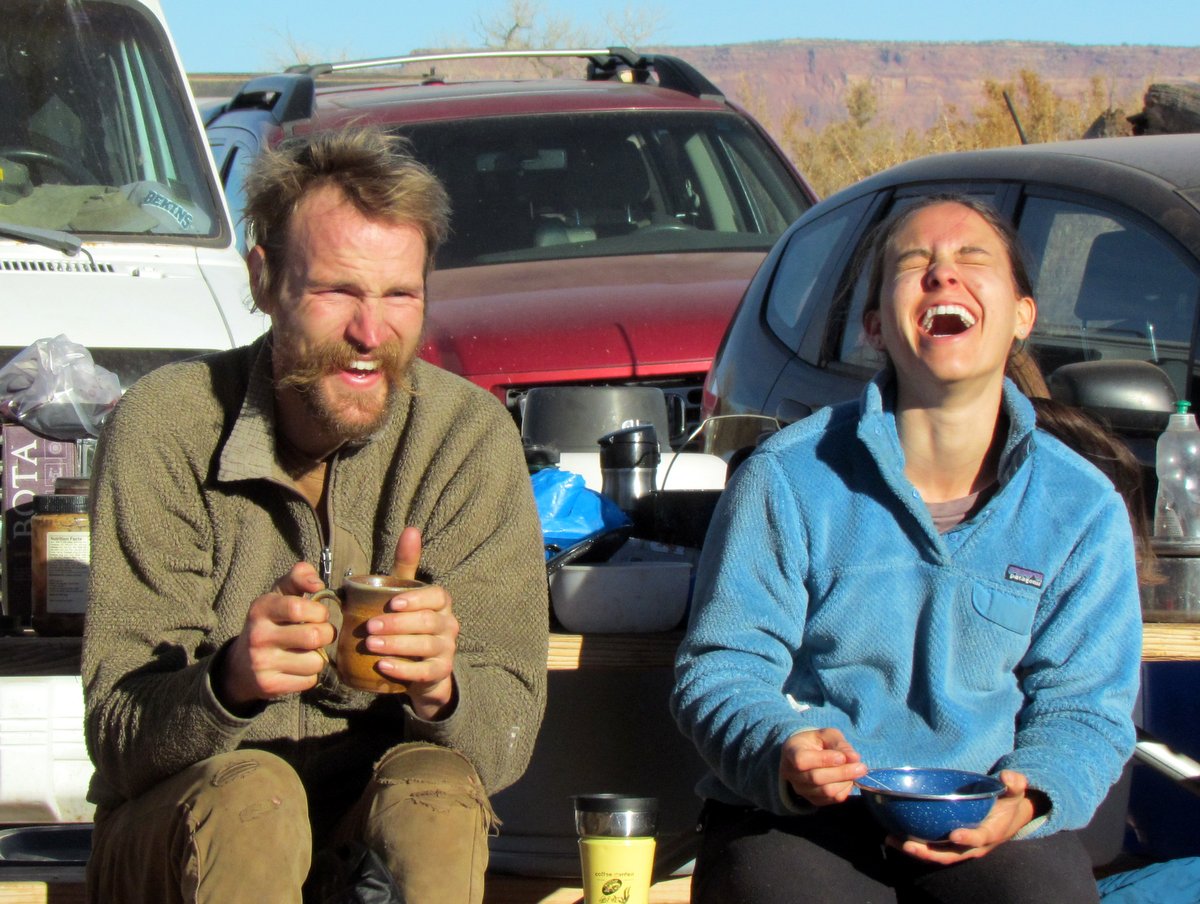 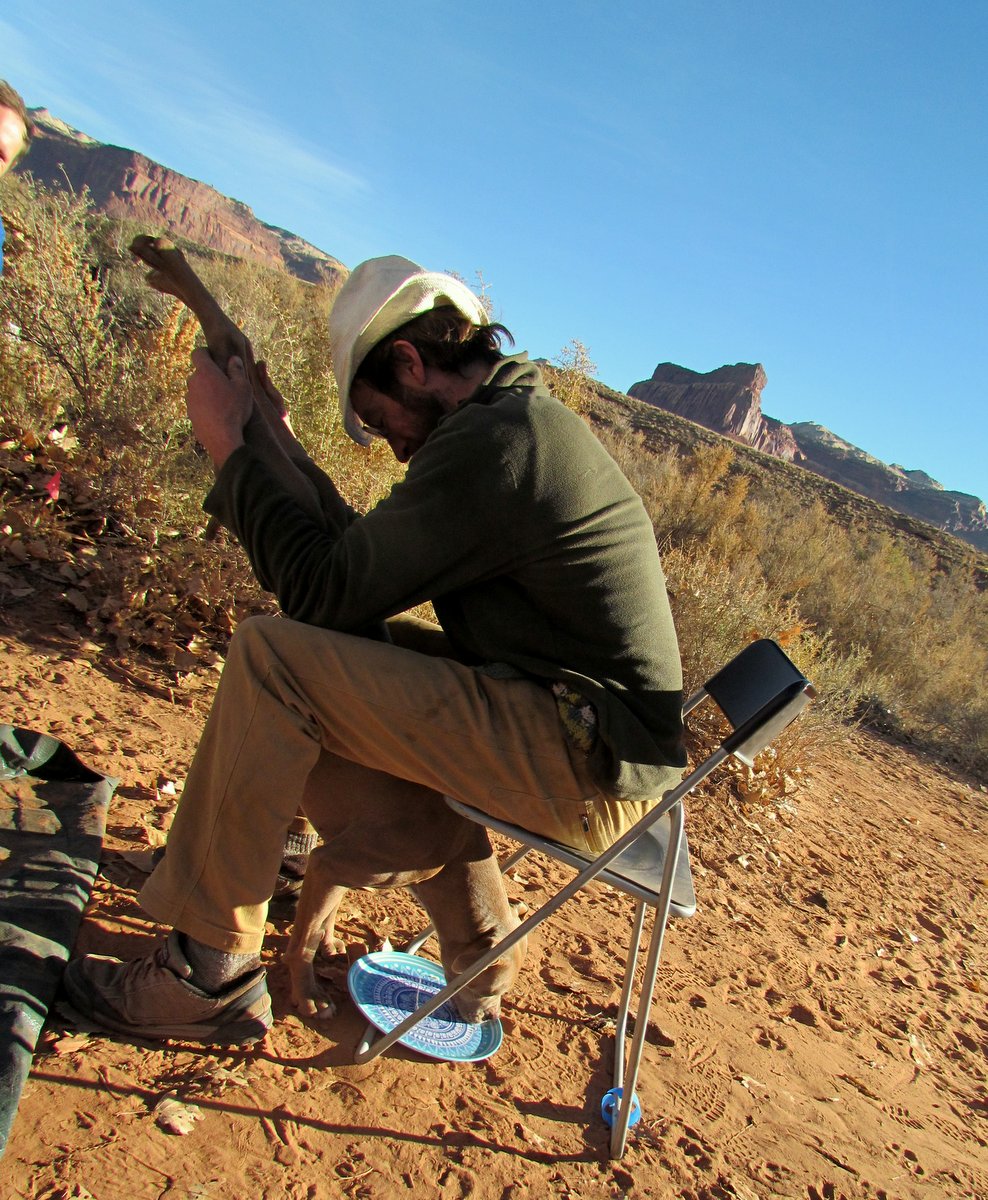 Well, except for Nate. He was always serious and no fun. Fuck that guy. 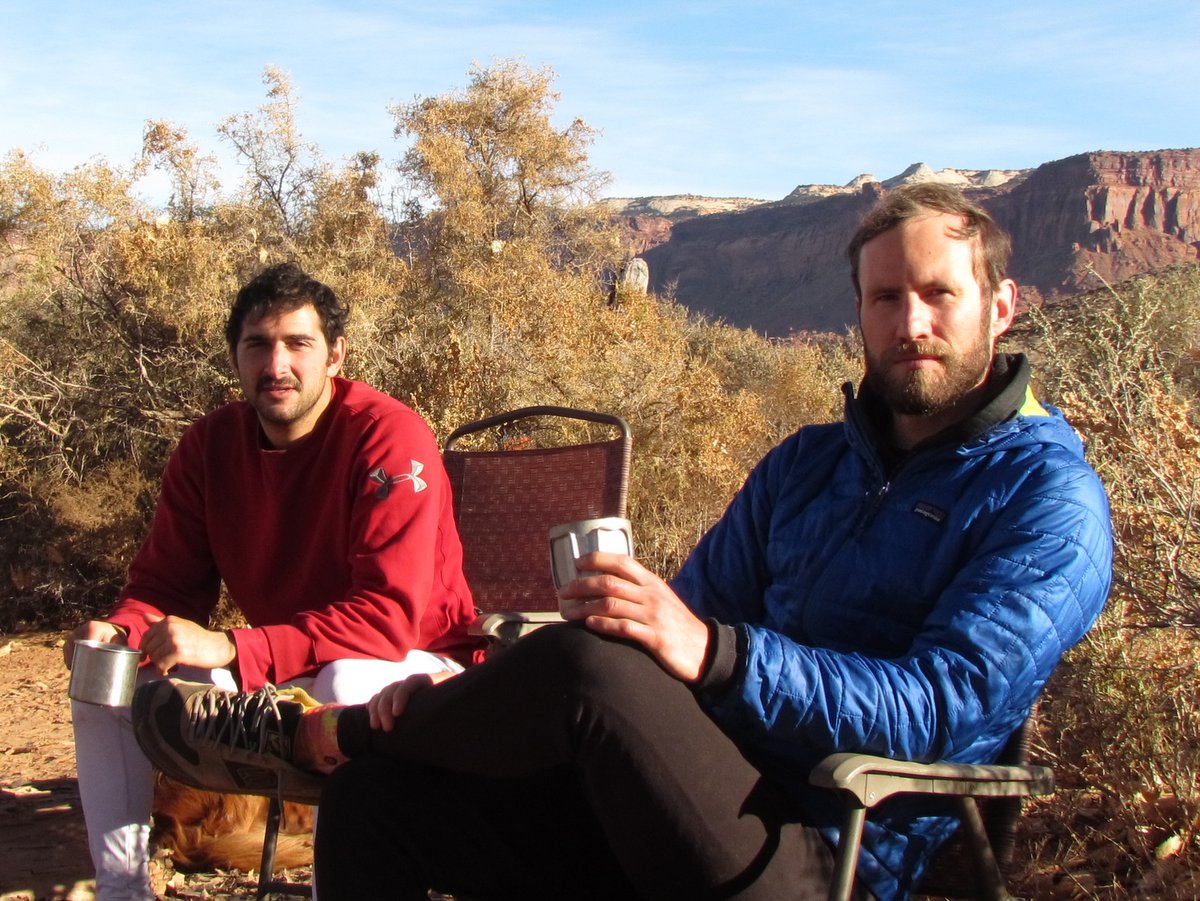 Right then. To business.

I rolled in to camp late Wednesday morning, and my heart leapt with joy to see a pajamaed David Goldman sitting in camp, alone and friendless.

Dave and I consulted the climbing book (ie, Matt Steel), and set off over rocky roads to Tenderloin Wall, where I put up my first trad climb of the year (that wasn't Gunky, anyways). (Update - Wait, what the shit am I talking about? I spent a week doing cracks in Vedauwoo. Maybe I meant I climbed my first long, splitter crack of the year?) 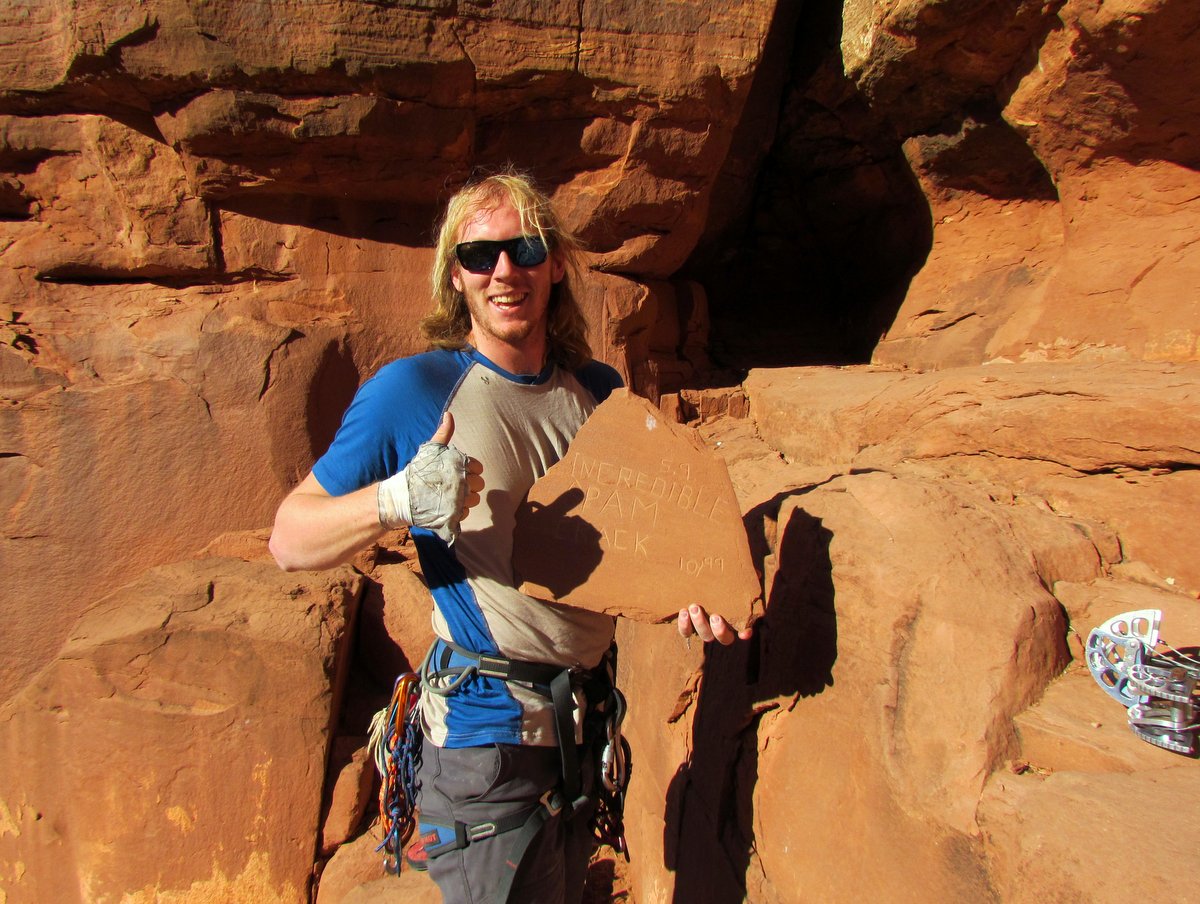 I lead it twice, and had all the funs there in that desert heat.

In between my leads, Dave had himself a go of it as well. 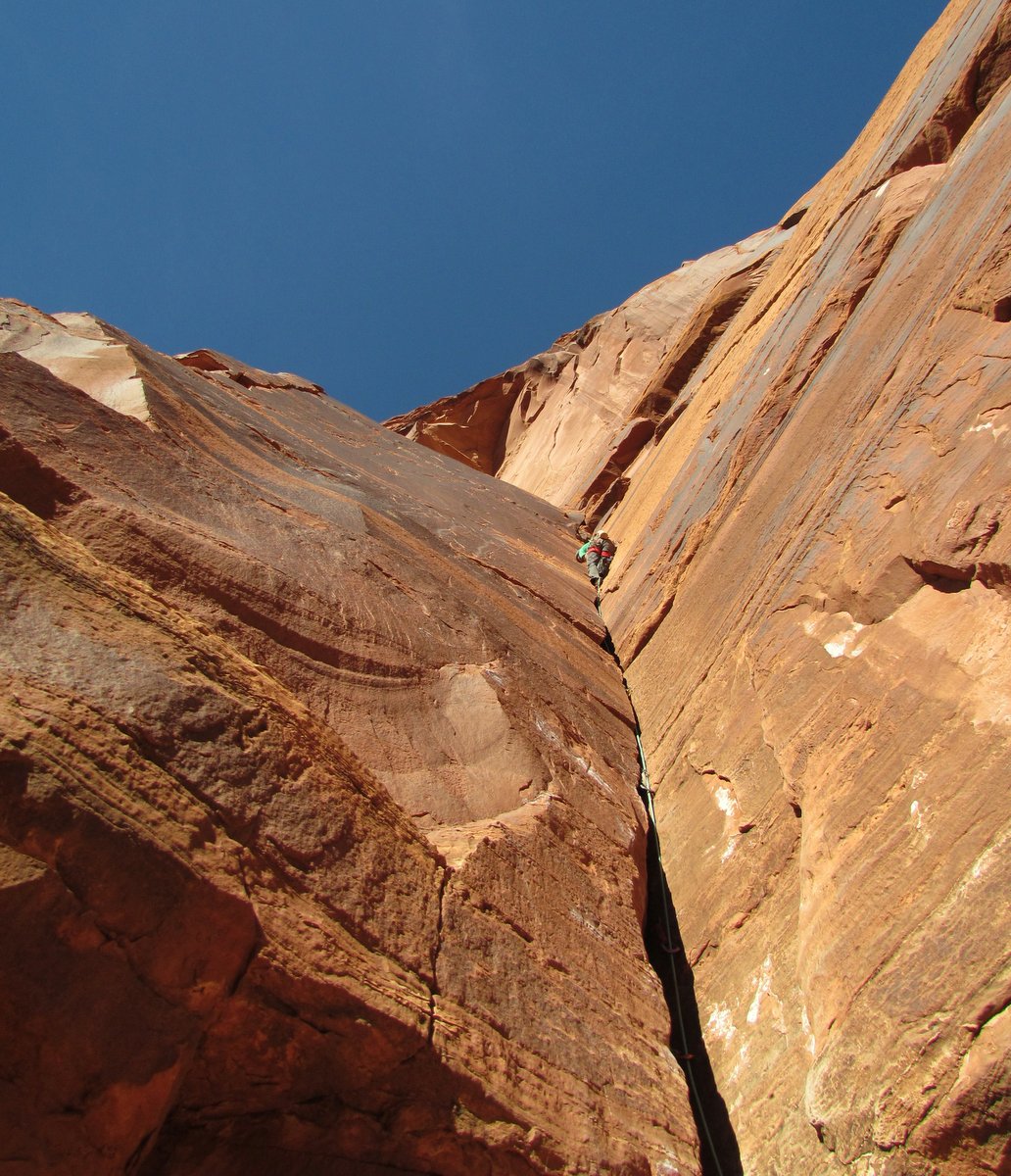 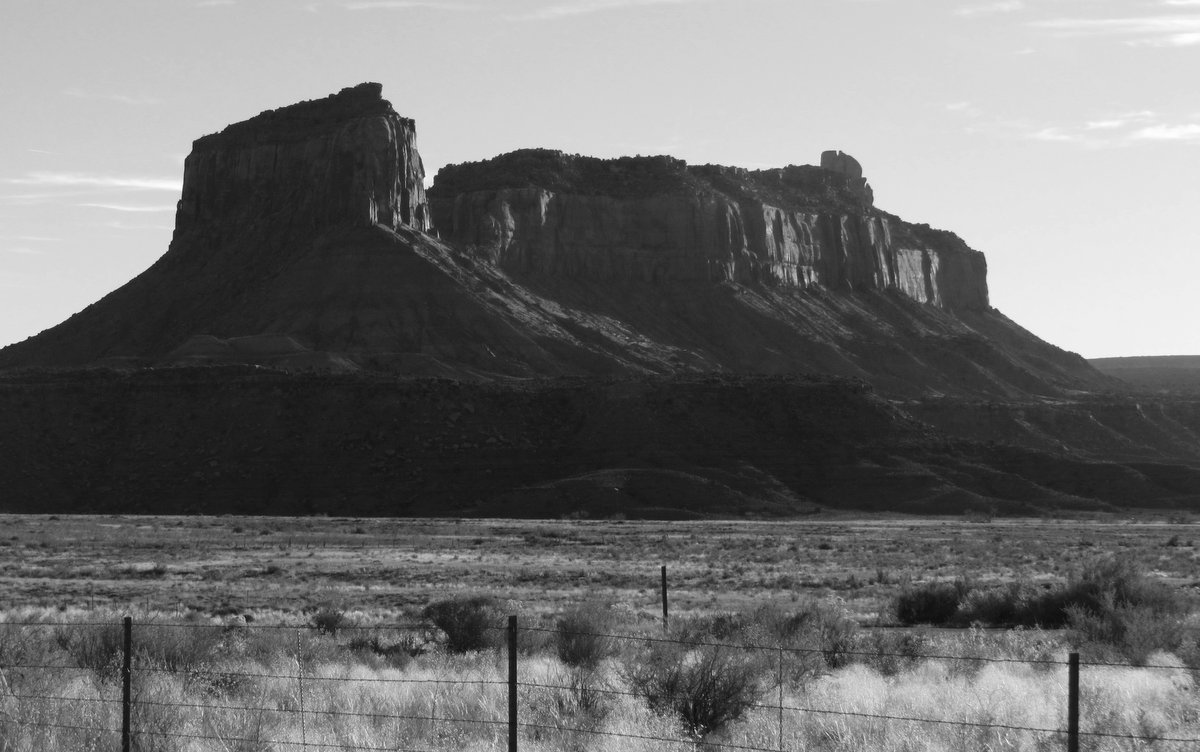 I had one ambition for Thursday: TR the hell out of some finger cracks.

Amidst trepidation of Turkey Day crowds, the crew rolled out to Battle of the Bulge. Turned out everyone else may have had the same trepidations, as BoB was completely deserted!

It was on this day that we met the loveliest of Californian couples, Link and Patty. Aside: Wow, only now, writing them down, am I noticing that our vegetarian friends had very sausagey names.

Nate put up Warmup and I pulled on a ringlock for the very first time.

Dave lead Cave Route, and I got to do my first splitter fingers climb. I surprised myself by just chugging right through it. Fingers = OK! 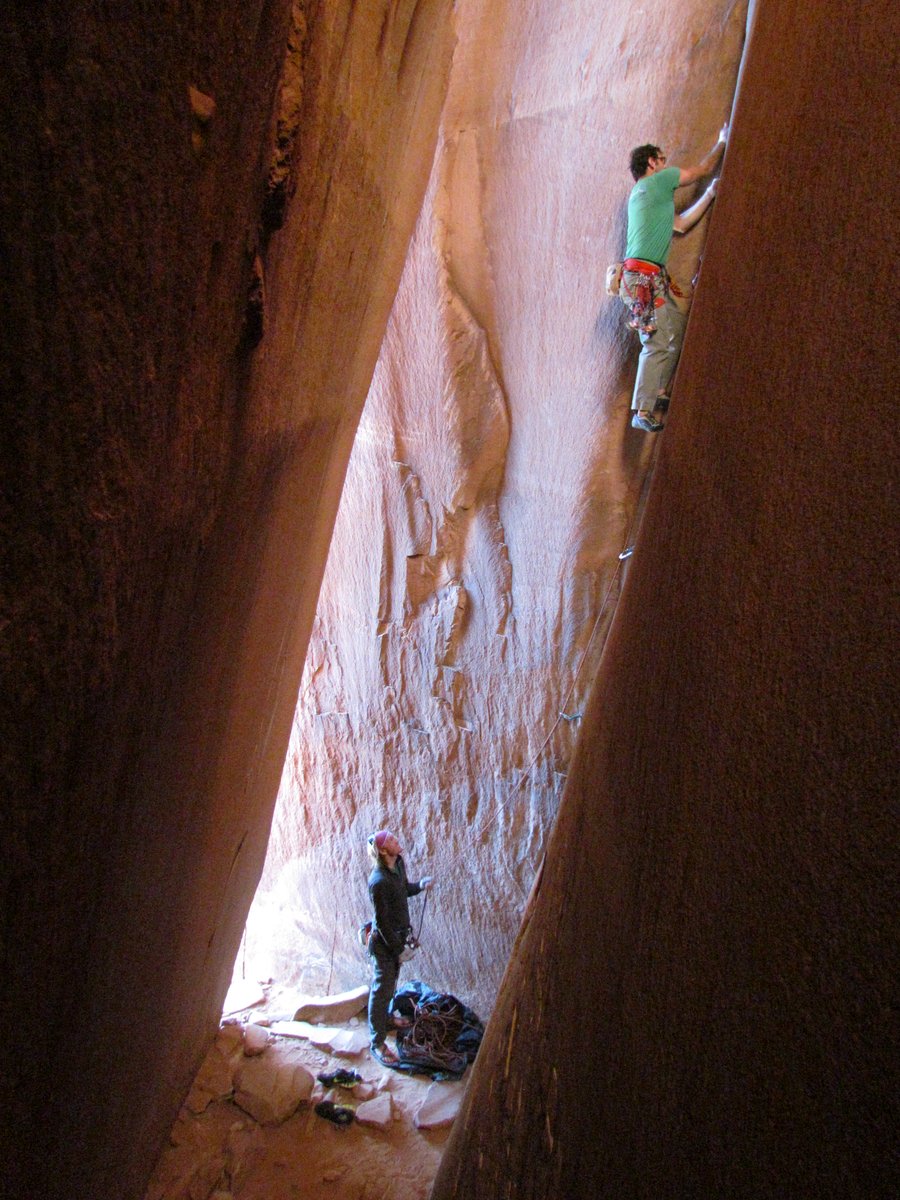 Emily was feeling spunky, and set out to do the monstrous Jane Fonda's Total Body Workout. If you look closely, you can see her entering the offwidth start behind all that gear. 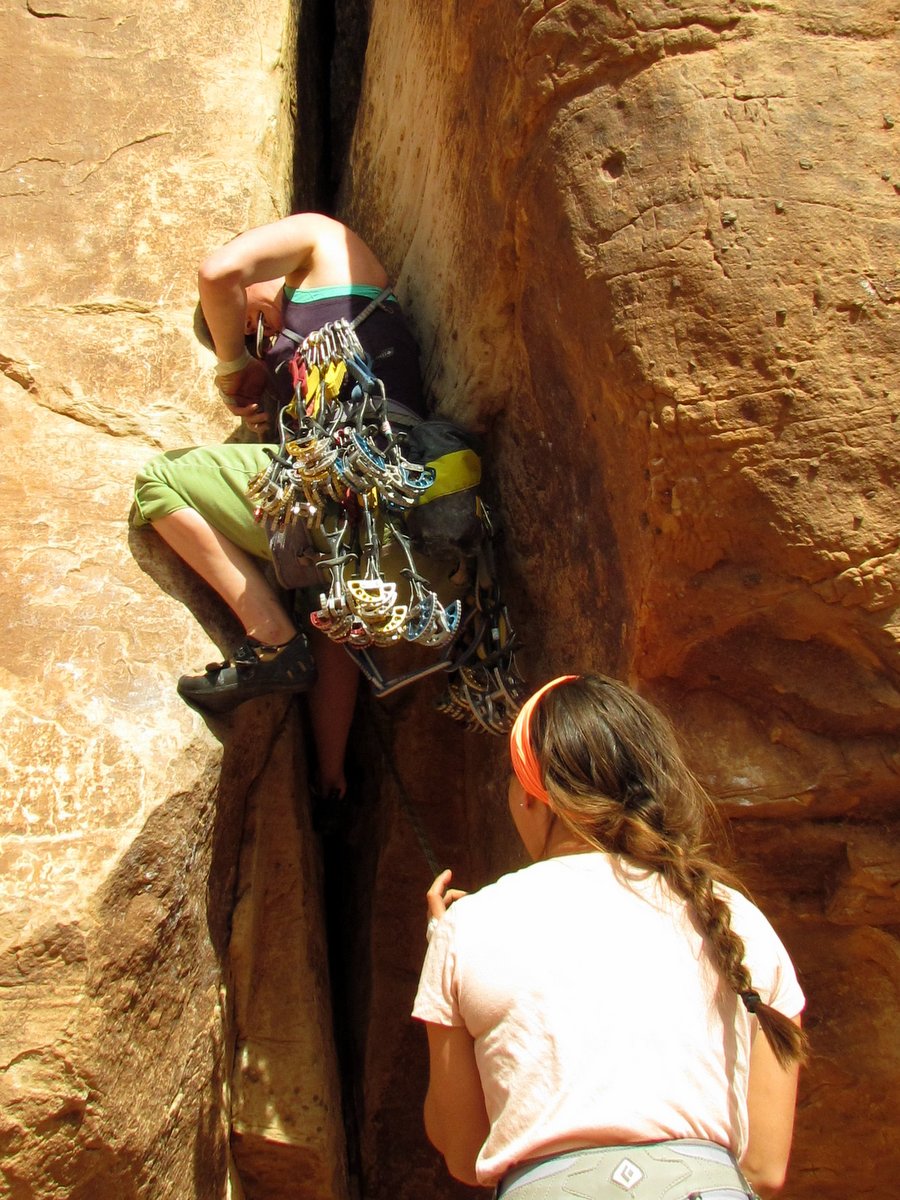 JFTBW was long enough it needed two ropes to toprope. The OW start chewed me up and spit me out a few times, but after making it through there and halfway up the steep 1s above I came back down. I'd had my fill of 1s for the day (or so I thought).

Here's Lily about a third of the way up, crushing as a Lily does.

After a bit of a cooldown, I hiked down to my car and picked up another rope and gear and headed to Donnelly Canyon, where Dave lead Chocolate Corner. I did my third 1s crack of the day, and was happy to call it.

Down in the parking lot, we had a chat, and I expressed how wonderful I thought it would be to have a roadie for the way back to the camp. Some kind man then handed me a 16oz beer.
Thank you, kind man. Wherever you are. 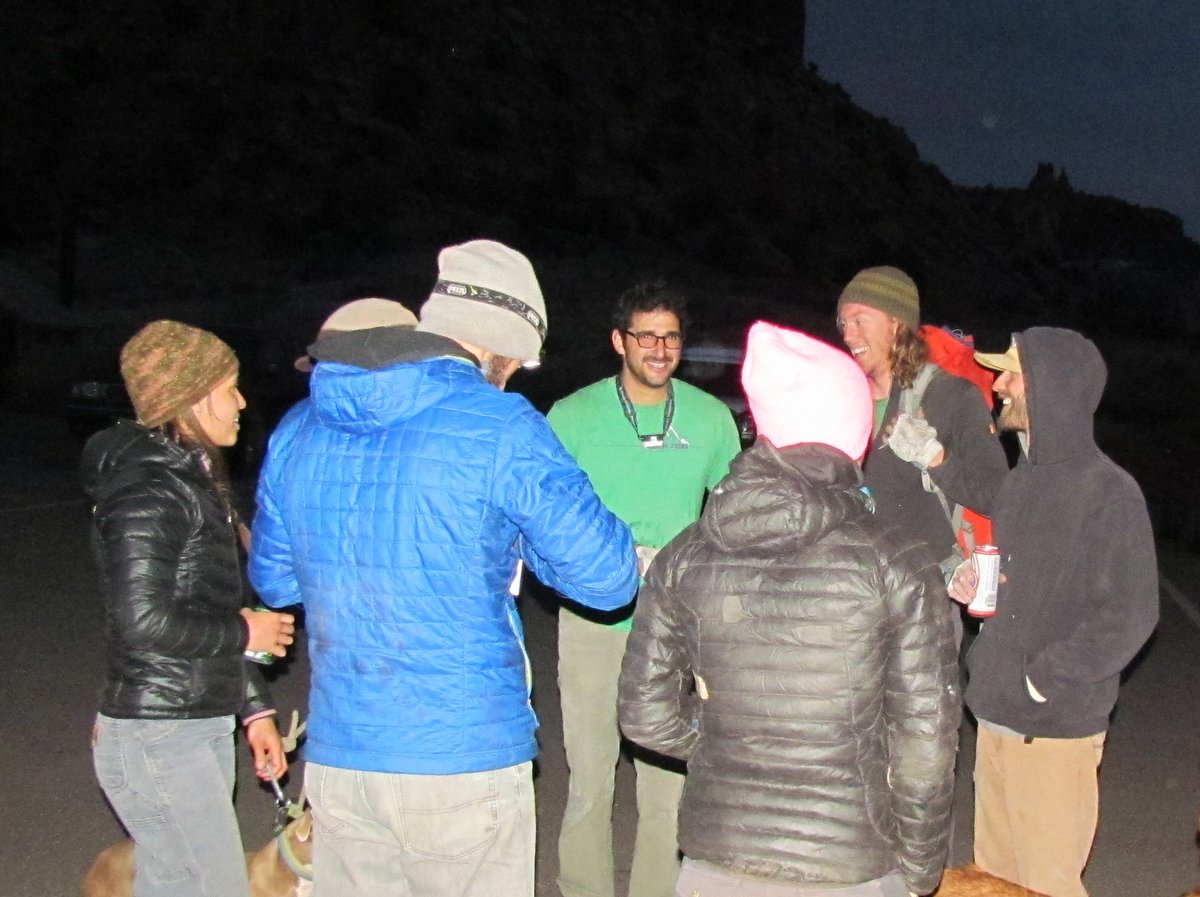 (I know where he is in that photo at least - all the way right.) 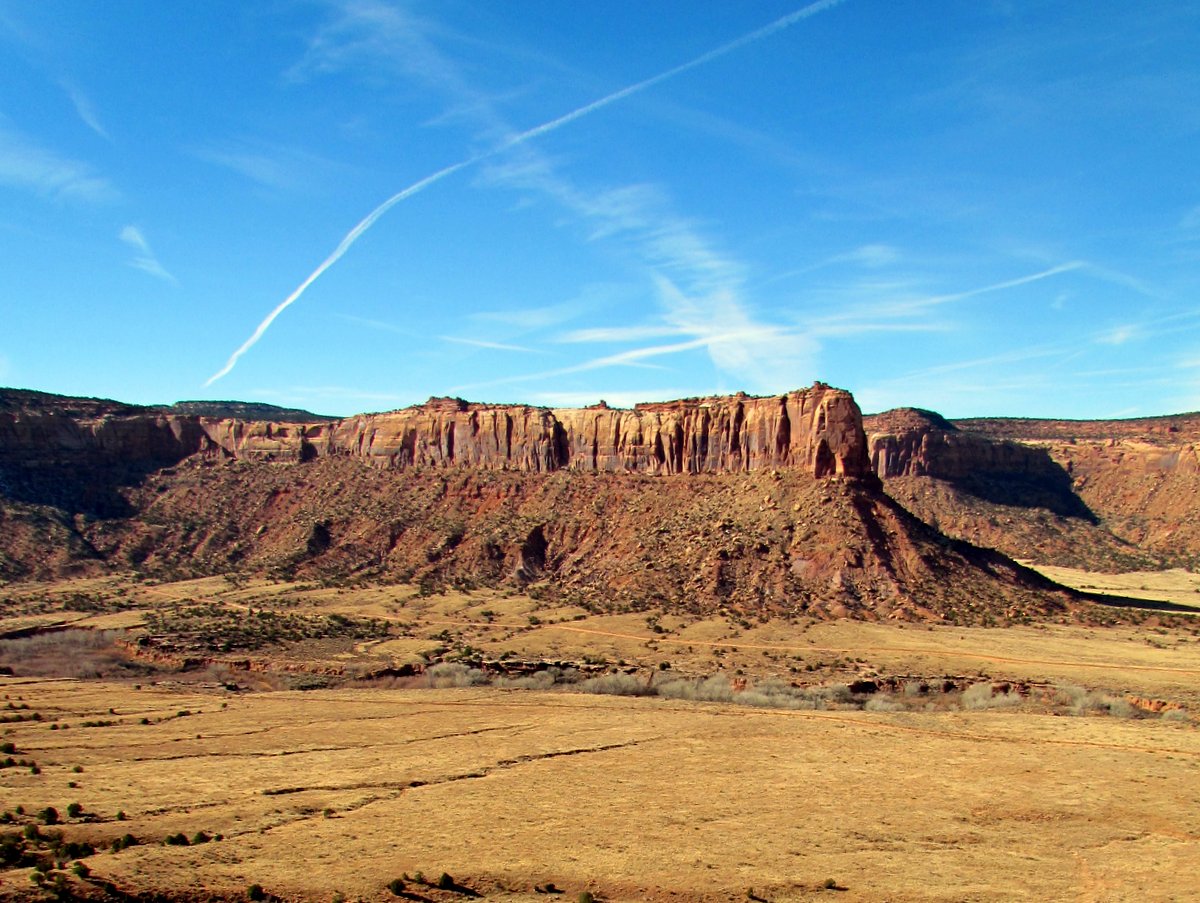 We went somewhere a bit remote Friday, as our group count had gone up: Sabbatical Wall. The photo of everyone walking along together up in the Crew section is from this hike.

We beat our own path on the way up. I started the day with a fun lead, arms wide with a fist jam on the left and a hand jam on the right (DF ROUTE). 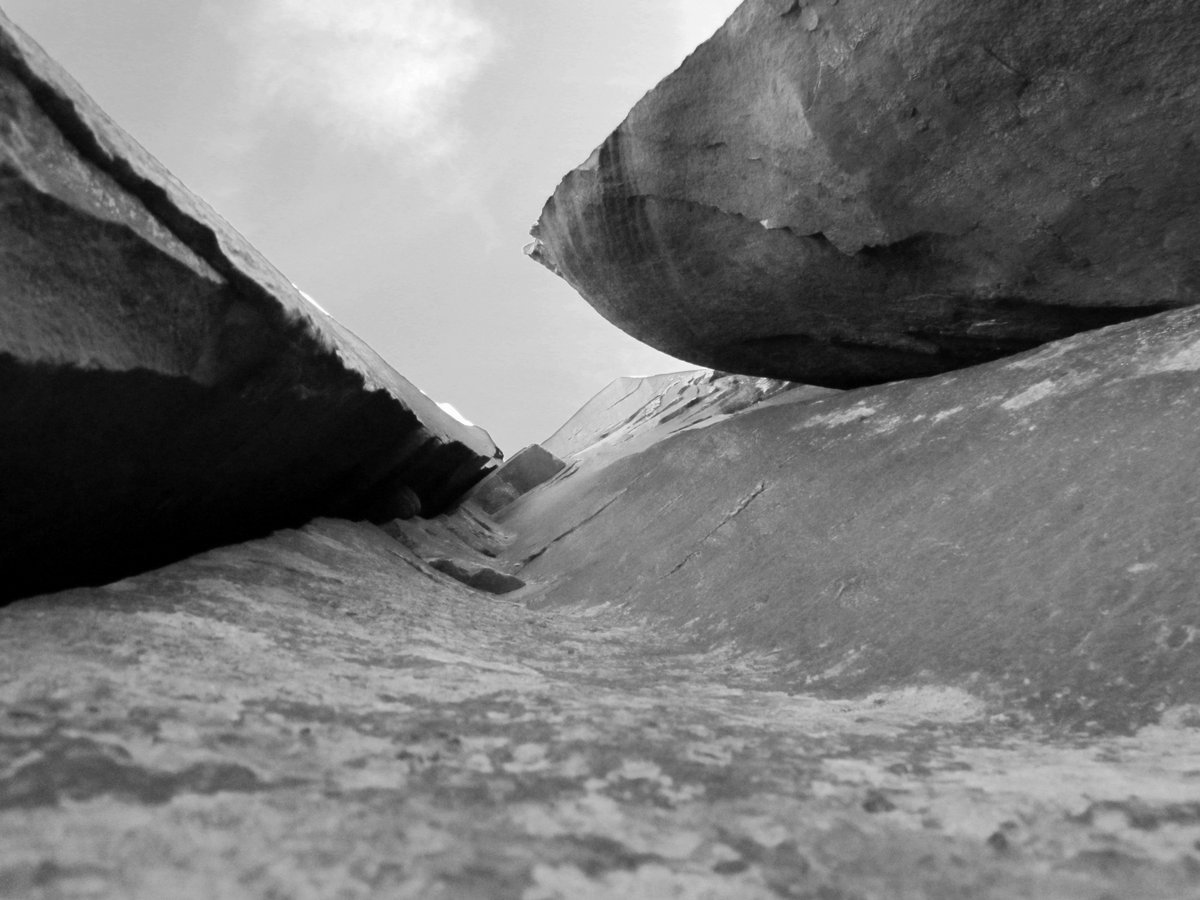 Somebody put up The Toss, and I felt good enough on the TR that I decided to come back and lead it. 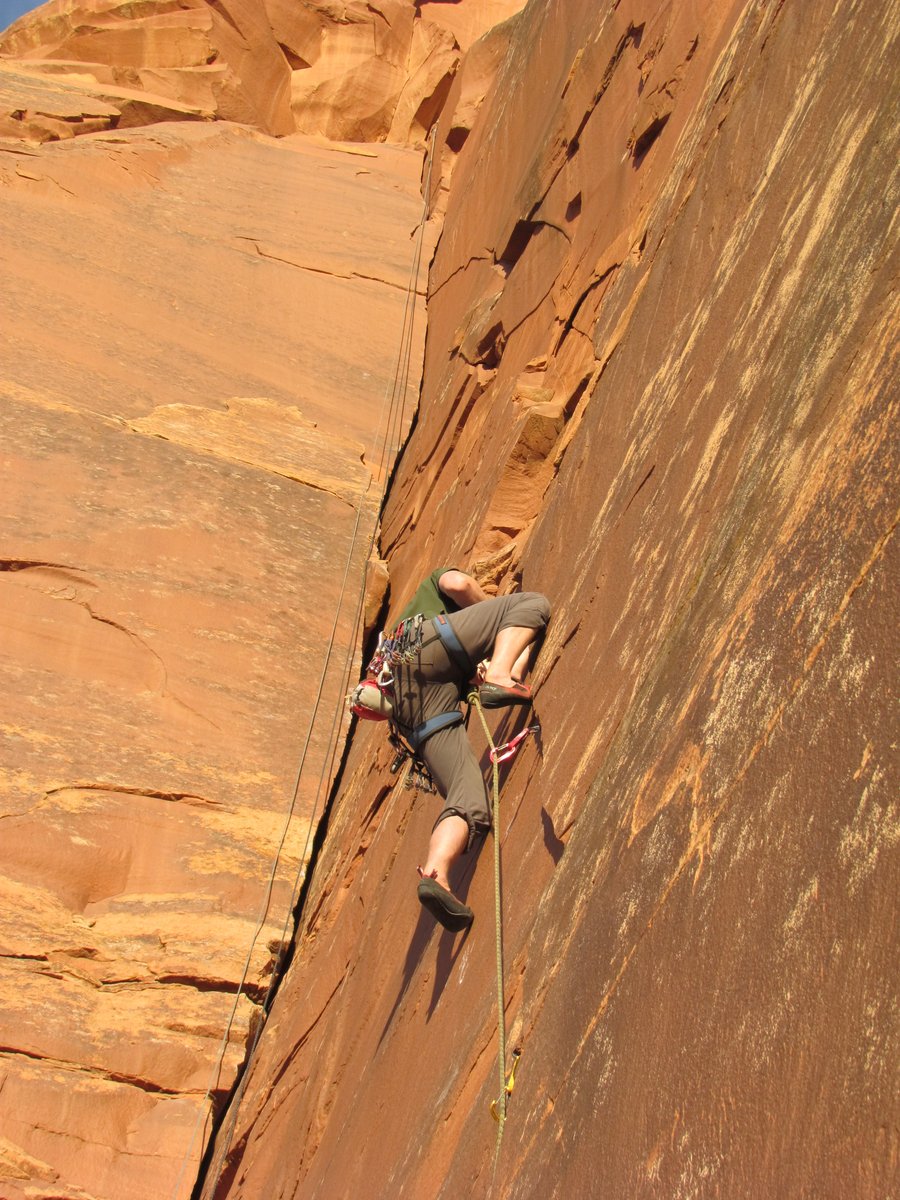 Patty also had a good time climbing up The Toss's fun diagonalness. 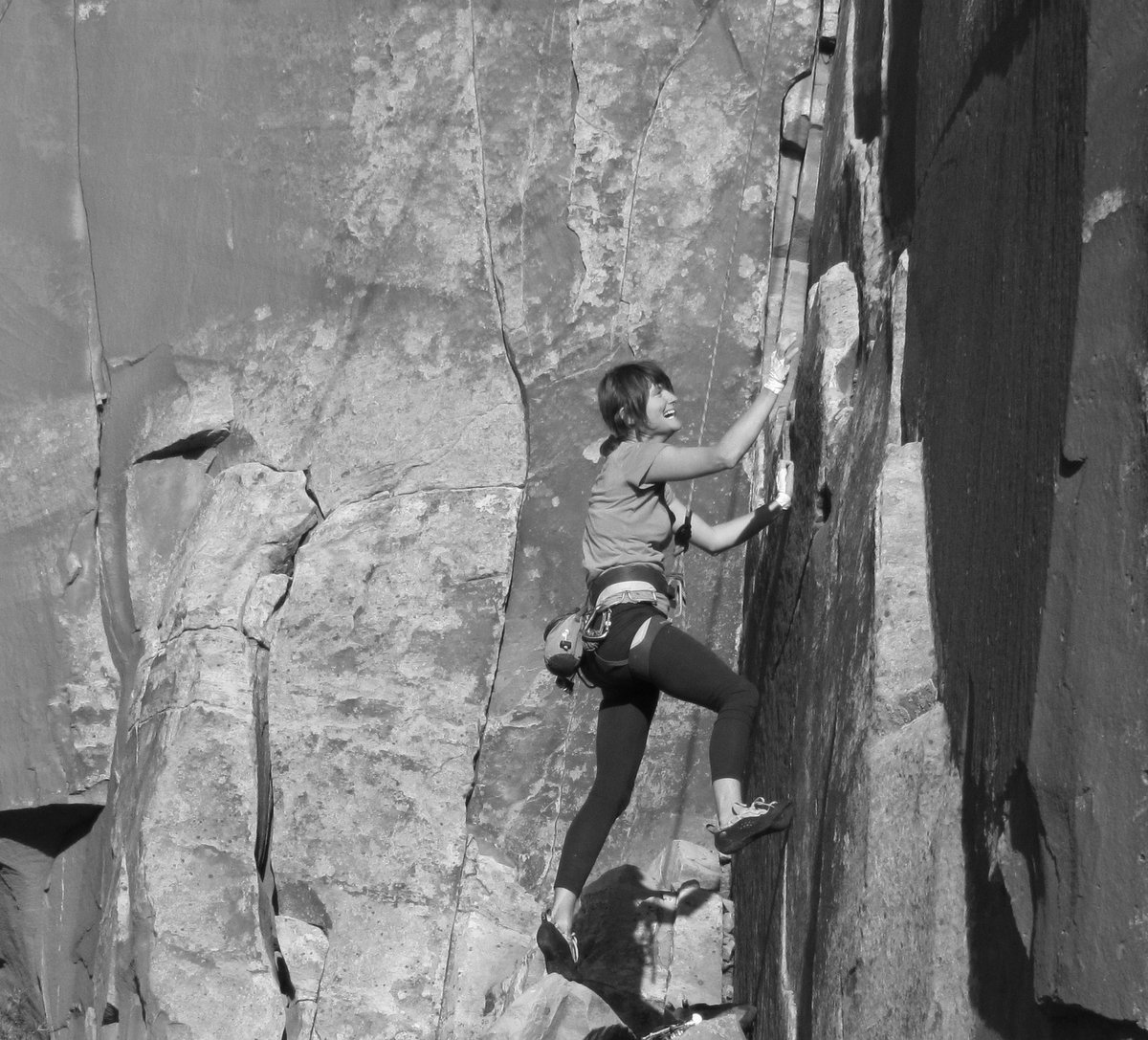 Dave and I went around to some Unknown Flake, which was so fun (and short) that I did two laps back to back. 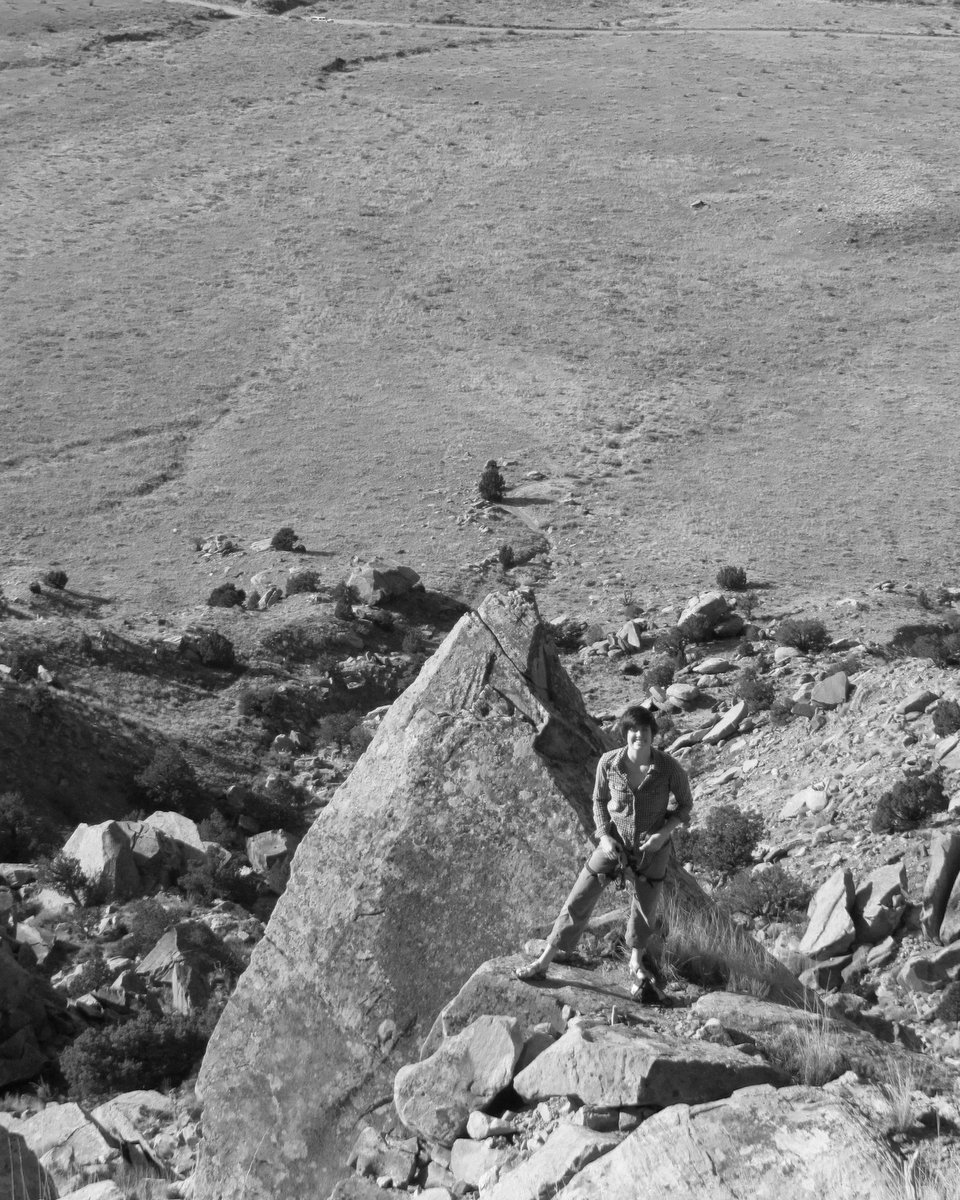 When it was late and we were tired and it was getting dark, we walked back. Because that's what you do. There was a moon, and it was in the sky. 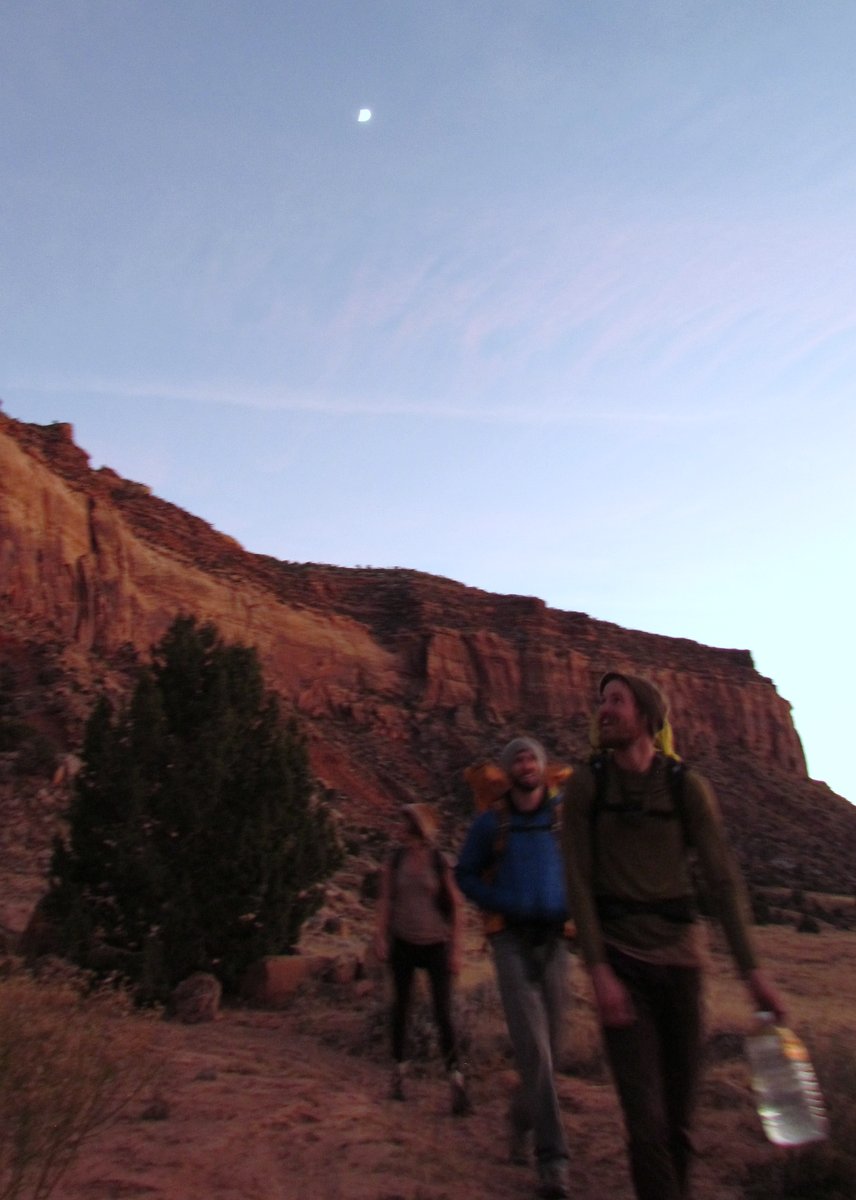 Of course it's blurry. I took it in the dark. Shut up. Your face is blurry. 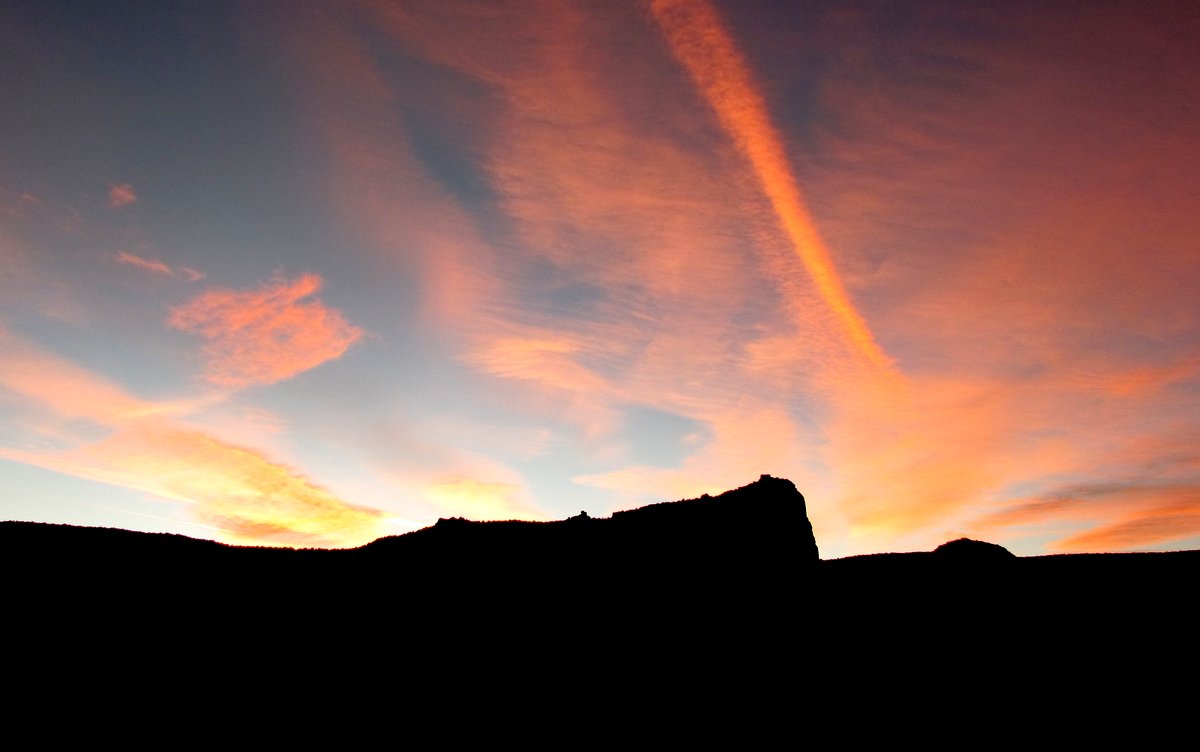 I forgot my camera in the car after taking the group photo in front of the Bridger Jacks :/ Luckily, Dave had his phone cam!

I started the day with my most memorable lead of the week, On the Up & Up. It starts with twenty feet of 2s, pods out in a big way, changes to 3s and pulls straight out a horizontal roof. From there, it's plug and chug to the finish. 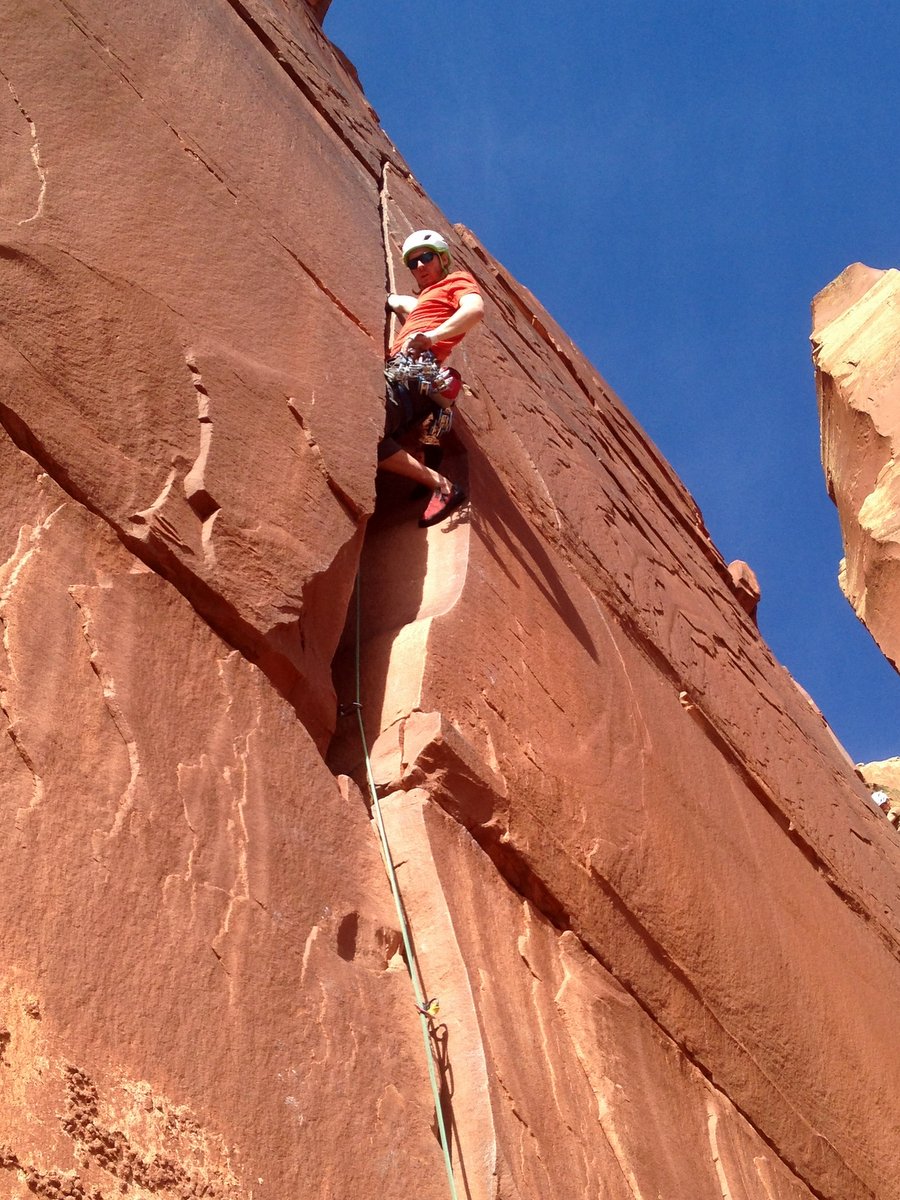 It was much buenos. I went up Emily's Unnamed 5.9 off to the right, then followed Link and Dave up Whale's Back, which was the route that ruined my tape gloves and left me bloody at the end of a great week in the Creek. 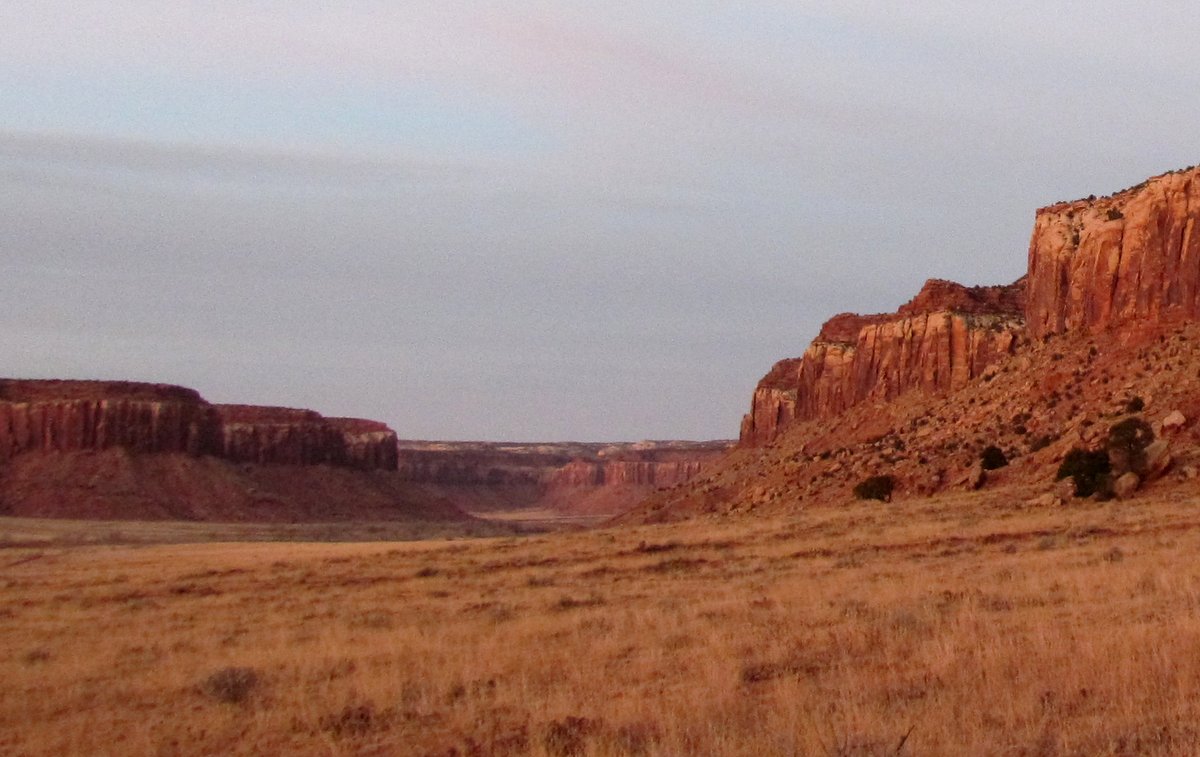 This thing's been teasing me for a year. Three times has it foiled me:

Link helped me convince Dave that you shouldn't pass up the chance to do a climb, so we hit it on the way back to SLC. 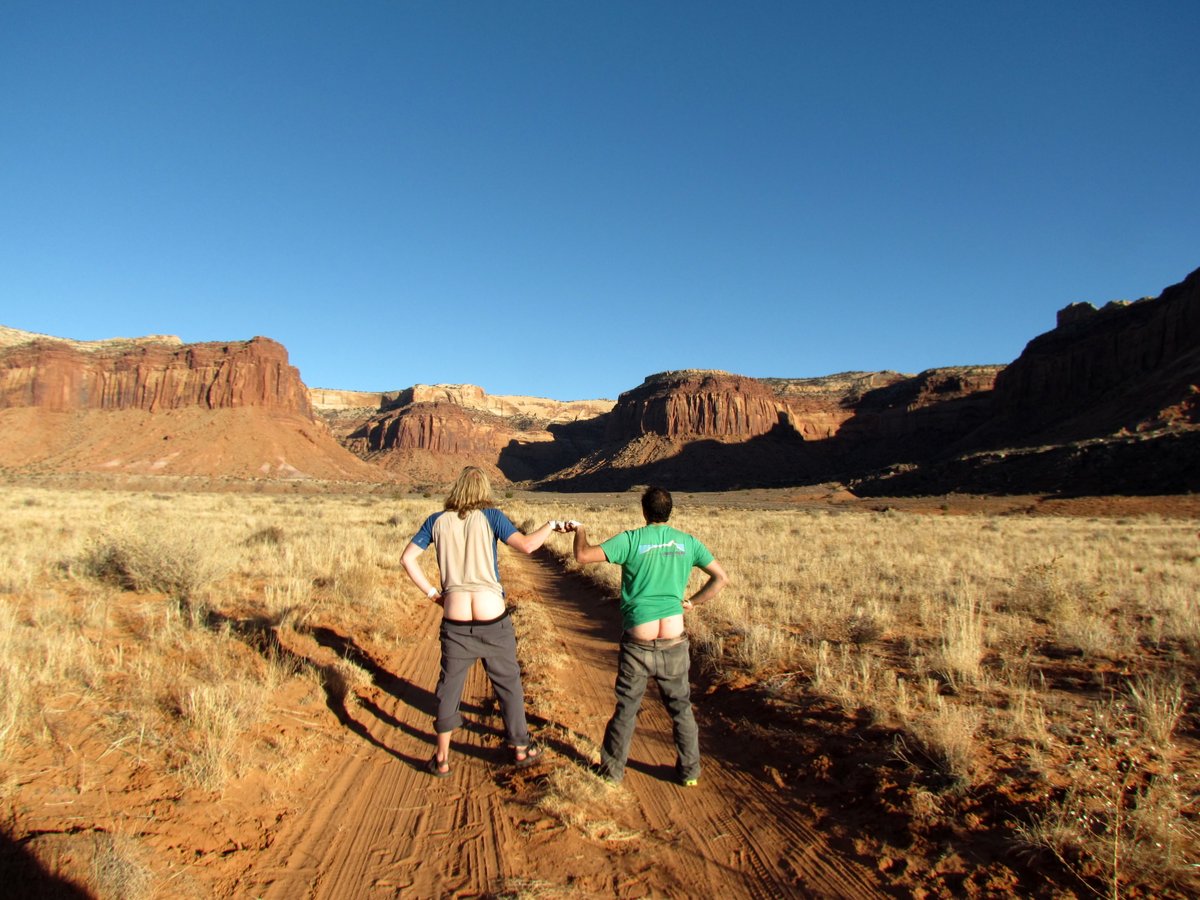