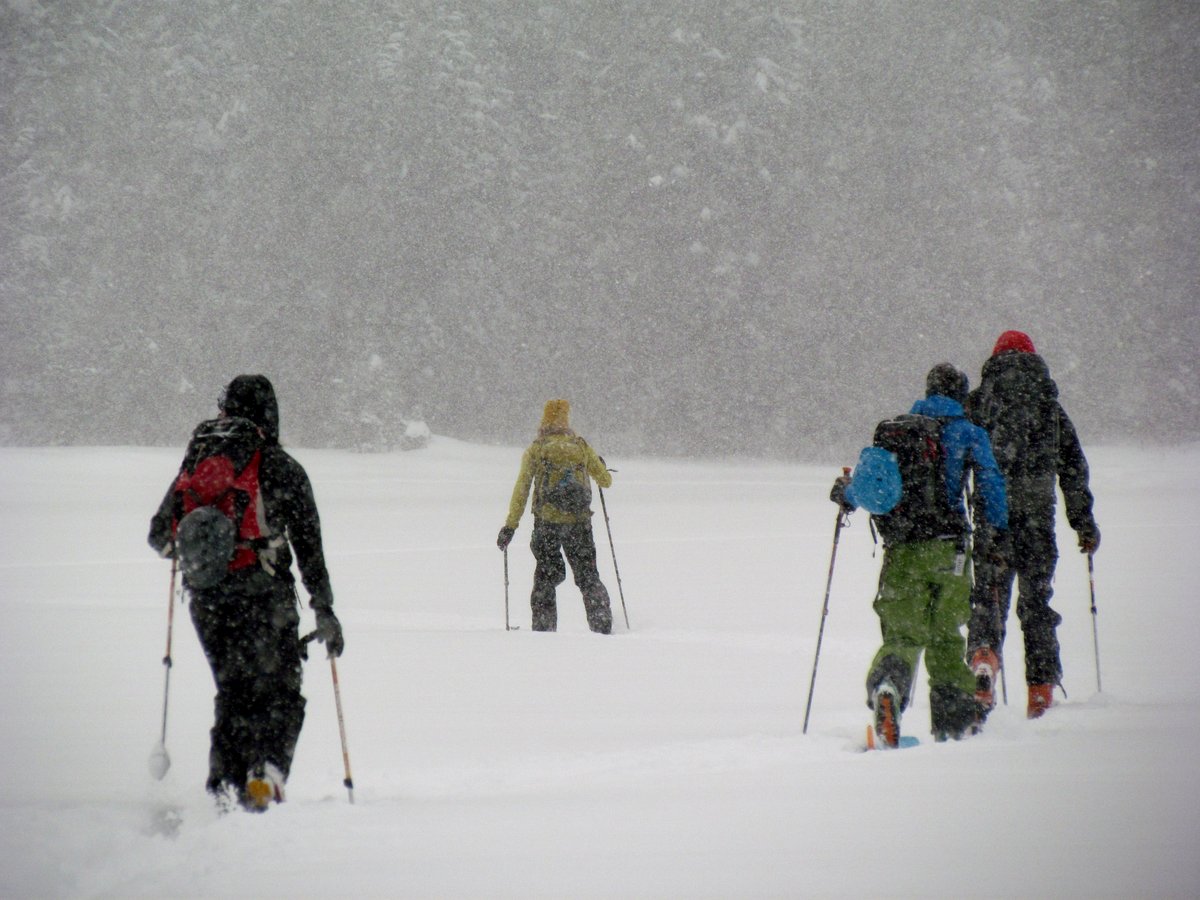 Andrea beat me to the punch, but I've at last had a Saturday at home to edit photos. Wahoo!

Our goal was Disappointment Peak, just off from the Grand itself. The tour in was long enough and zig-zaggy enough that I was completely turned around about what was where by the time we were heading back. Zoom out on the map below and you'll see Taggart Lake. We started from the road, crossed that, and worked our way up to Disappointment, depositing ourselves down on Delta Lake. This was only my second day of backcountry this year, and the big tour up the Tetons ended up kicking my ass.

It feels dishonest to just show a picture of the start of our trek and then to jump right into the good stuff, as it doesn't create the sense of time between these things, but let's agree to just skip over the painful bits and enjoy ourselves, eh?

Ben and Ben went over and made a pit to check out our run. I went over with them and took of my skins and switched to board mode for some reason.

So, you can understand my disappointment when the group decided they would be going up and around to get an extra forty feet, as I did my best to scootch back to where Alyssa and the Swedes were waiting. Until Ben and I realized, if I just stayed put, I'd have a great vantage of people dropping in. I stood to the side and tried my best to get good pictures.

After a few amazing powder turns, we all regrouped for the next section, where the terrain became a little more variable and hard to read - a few of us found rocks. It ended with a big open swoop onto Delta Lake, which is where I stood and took the pictures for round dos.

Beardless Ben was our last man down. He exploded out of nowhere, taking a practically snowless, epic-rad mini-chute. He came down so quick I could hardly catch him with the camera :(

I did, however, get sweet post-ski photos of the Bens on Delta Lake, including when Bearded Ben came down and gave me the bump as he flew by.

Delta Lake was where I realized my sense of direction had gone completely astray. We goofed around on the surface for a bit, with folks debating splitting into two groups: one to return to the cars, and another to do a bit more adventuring.

Ultimately though, we went with Martin's mother's sage advice of "Never go skiing after noon." This turned out to be rather prudent, looking at what time it was when we had all finally gotten back to the cars. So, Martin and I hoofed across the lake (which was mushy on top) while the skiers took advantage of the"trail" we plowed through the snow.

From there, it was a mixture of snow humping and pillow jumping, a giant down-ish traverse with outrageously fun sections of pow pow and outrageously frustrating sloughs up snow, pulling the snowboard behind myself. I've only got one photo of this fun stuff: Alyssa gettin' her some.

Two or three notable events here: Andrea completely snaking one of my lines, lots of fun little jumps on cat-tracks, and finally, finishing a mini-run in an explosion of powder all over myself and Ben.

It was a day of stupid good skiing. The snow was perfect, and carving through it was effortless. Conditions stayed like that for another day or two as we played around in Togwotee and the Tetons for our New Years vacation.