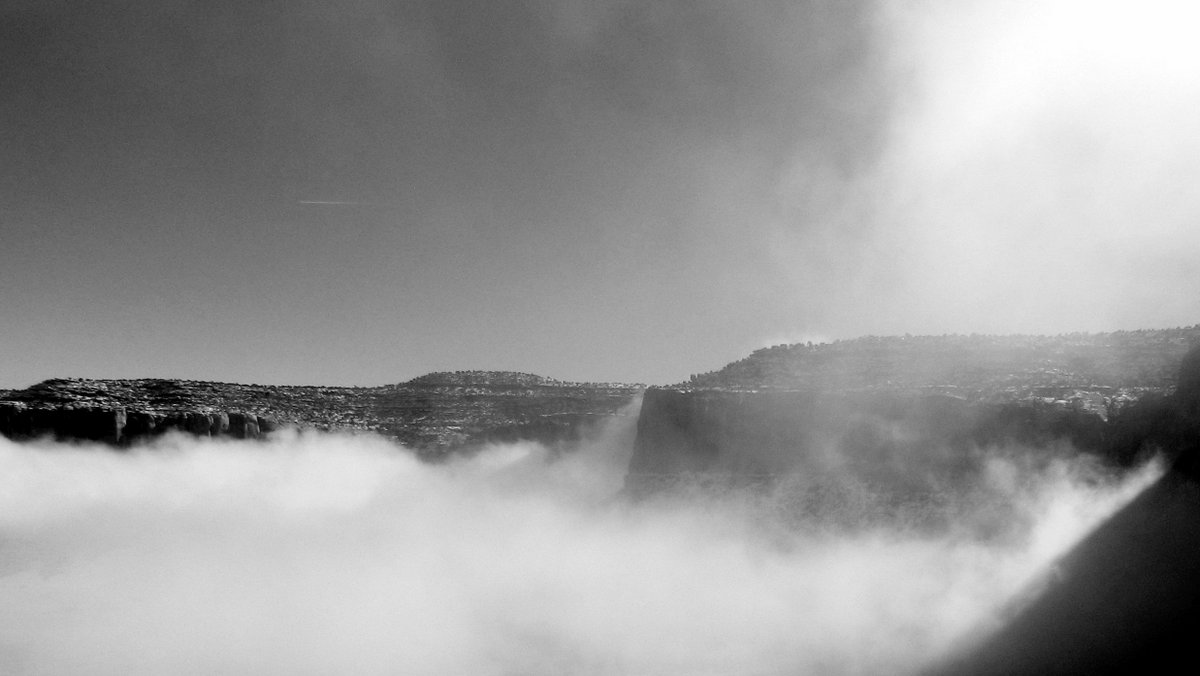 Our second day of adventuring (here's Day 1) out in the Red Deserts around Moab, Utah saw us waking up to a bit of frost, and a hell of a view.

The open, starry sky was great to look at, but not so great at keeping in the heat. We slept with our 0° F bags snugged so tightly around our faces that only our noses stuck out. Luckily, the sun hit our tent first thing in the morning, and the rocks that blotted out the stars the night before were illuminated behind us.

We waited for the sun to do its thing and warm us and the rock up, passing time eating breakfast and drinking coffee and debating what we would climb.  The Bridger Jacks, which had captured our imagination the night before and dominated our view in the morning, seemed an obvious choice, being so close to camp. The guidebook made them sound more like multi-pitch adventure climbing than the aesthetic, perfect cracks the Creek was famous for, and neither Alyssa nor I had climbed real trad routes in ages (Bullwinkle from the day before wasn't exactly a challenge). Eventually I convinced Alyssa we ought to get up Easter Island, a very prominent finger in the middle of the Jacks. Shortly after we made up our minds, two climbers came walking up the road, saying they were headed to Easter Island. Guess we'd just take it easy to start with.

The other climbers weren't the only thing that slowed us down though. After nine or ten, the sun had really started to warm up the ground, covered in a light layer of ice and snow. The vaporized frost turned into fog, and suddenly the Bridger Jacks (and the rest of Indian Creek) disappeared into nothingness.

Still, after it became clear that not even the afternoon sun would burn away the fog, we knew we had to just bite the bullet and climb in the damp. It was a comfortable hike out of camp up the big hill behind us, chasing rock cairns across the flat, empty places and then having them guide us up the boulder field and stair steps to the top.

By the time we got up to the Jacks themselves, we (and the climbers who had gone up before us) were completely enshrouded in the mist.

Anyways, we made our way to the corner we'd be climbing in, scoped out the crack, and readied the rack.

The name of the climb up Easter Island (which is the name of the tower itself) is Thunderbolts, but excuse me if I just keep referring to the whole thing as Easter Island. It's obvious where the inspiration came from for the name though. The first pitch starts off with a fat, zig-zagging off-fists crack smeared with chalk.

You can see in that photo that where the crack goes furthest left, up high, that the climb turns into a three-legged slough with the help of the dihederal on the left. Up to there, I remember grunting as I shoved my hands as far into the crack as the would go, shoving the palm of my hand against one side of the rock and creating a counter-force by smashing my elbow against the opposite. Over and over, up and up with the help of big fat foot jams (heel-toe heel-toe).

At the end of the thunderbolt, after you've placed all  your 3's and 4's, you realize a #1 would've been a nice thing to have brought along. Luckily, I did bring one along! Sticking it into a vertical seam to make myself feel better, I struck out to the right, traversing the corner of the climb with slipper, slanted feet and one lousy foothold. The important thing on this traverse was to not fall. There was no question that I would've been on the ride of my life, taking a forty or fifty foot pendulum swing back past the crack and slamming into the wall around the way.

I stole this photo from Mountain Project to show you about where I'm talking about.

The best part about that wonky traverse is, it's not over yet. Reading so much about the fat crack on the way up hadn't left me thinking I'd want some (finger-) tips gear, but boy was I sure sorry not to have any once I'd made it around that awful corner. The Bro-Proj describes the traverse and top-out as "exciting and improbable moves right and up to the next ledge system".

With twenty feet of rope between me and my last piece (an uninspiring #1 placement), I was face-to-face with a .3 crack running straight up a corner onto an SUV sized ledge at eye level, with the anchor on the far side of that ledge. Behind me and to my left, open air. In front of me, featureless vertical rock. To my right, creating the crack with the rock in front of me, was the ledge, which sloped off behind me in such a way that I could stick a foot up onto it, but not without forgoing any use of the crack and simultaneously having nowhere for my left.

After spending five minutes applying and reapplying copious amounts of chalk (read: powdered courage) to my hands, I decided to just shoot for it. I mean, the anchor was right there. This ledge wasn't any taller than I was; surely I could just hop on up it without a problem, no climbing needed. So, with a heave-ho, I got my shoulders up on the rock... and started slipping backwards towards the nothing. Eep! Somehow I twisted and scooted and secured my ass (literally) on the ledge, and was able to pull the rope up with me and set up the anchor to belay Alyssa up. When she was coming up the same feature, she tried coming up the slope to the right ... and popped off. Scary, scary.

It was ten or fifteen feet of hands to tower proper, and then off and away on sandy sandstone (sounds redundant, but it's not) up the spire. The actual climbing spiraled up and around the tower, so I couldn't see quite where I would be going on my way up. Alyssa and I had brought a second rope so that we could have a fun, single rappel, and debated how we were going to get it up the second pitch. She had brought it up the first in he backpack, but I argued for taking it up on my haul loop for the second pitch, since her pack had unbalanced her so badly.

The second pitch was... thrilling? might be the word. The view, at least, was spectacular. The hands and feet, not quite. While straddling my way around a sharp corner with my hands almost directly over my head, fingertips scrabbling on tiny crimp, I began to shift my weight right - and the sandstone under my right hand exploded off the wall. My left hand and straddled legs kept me on the corner, but it was hardly an inspiring moment. Even after I made it from there, my feet felt like they were standing on microscopic ball-bearings, unable to actually anchor to anything because of the tiny sand between me and the rock. Later, with a really solid right-handed crimp propelling me through a big move, the stone broke away again, and this time I took a good twenty foot fall, all the scarier by the hundreds of feet below me and the fact that I couldn't see, hadn't seen since I started the second pitch, my belayer.

Eventually I just wanted off that rotten rock, and so may or may not have pulled on a draw or two. Ahem.

At the summit of the sandstone tower was a nice ridge to grab onto for the final pull up.
It broke too. Weeee.

In any case, at some point I managed to bring Alyssa up out of the cold of the setting sun and she got to enjoy the sandy grossness that was the second pitch. Don't let my whining and complaining lead you astray though, I'm really happy we did this route. Being on top of that tower was just magnificent, and it was a great adventure to go on together. In fact, that's just what that climb was. It wasn't some aesthetic climb, worth doing just for the movements and flow, but was instead an adventure, worth doing because dammit, someone's gotta slay the dragon!

The View From the Top

And so, after vanquishing the beast, we enjoyed the splendor of its golden hoard.

And then, of course, came the reason we'd brought up an extra rope - double rope rap! Wooo!

None of this would've been possible without Alyssa's huge muscles carrying up the extra rope. Thanks honey!

And finally, here's Grady eating out of a bowl, because he didn't get enough adorable photos in this post.