Jon and Kate invited me to join them on Risky Business, 4p at 10+ R. I thought it'd be a nuisance having me along, but I think it's safe to say our ménage à trois fulfilled all of our wildest desires. 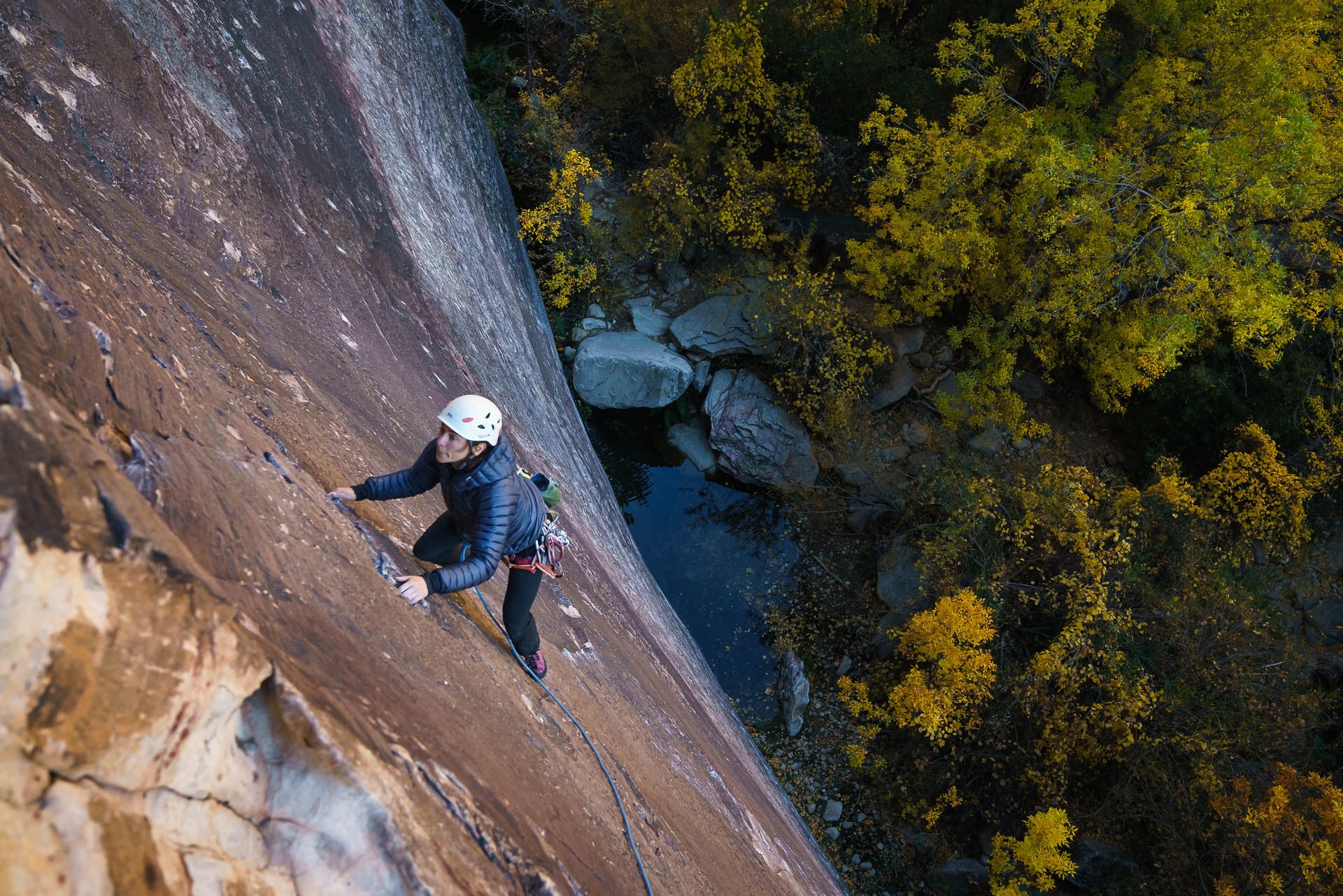 Jon and Kate invited me to join them on Risky Business, 4p at 10+ R. I thought it'd be a nuisance having me along, but I think it's safe to say our ménage à trois fulfilled all of our wildest desires.

Jon was psyched to start the climb, and so took the first pitch. For my part, I was psyched to spend as little time at hanging belays with two other people as possible, and so was happy to stay earthbound.

Jon had to work his way up slab past two bolts, getting some wild little pockets and technical climbing along the way.

Kate had to put up with a whole lotta shutter sounds and chatter while remembering she was also holding someone's life in her hands.

Having taken two skinny triple-certified ropes let us lead on twins and have both followers on route at once, keeping things moving at a pretty brisk pace.

Of course, two ropes has its complications as well.

The tall and narrow walls - and thus nearly permanent shade - of Mescalito provided a wildly lush backdrop for such a notoriously parched landscape. The approach involved multiple creek crossings and boulder hoppings; the gurgle of the creek was audible nearly to the top of the route.

Having two people at the belay relieved the belayer of the tedium of waiting for the leader to finish their pitch. I in particular benefitted, as I managed to convince the team to take over my shifts belaying in exchange for me taking photos as we went along. Everyone wins - but mostly especially me! Joy!

... until I had to do that 5.10R pitch with six pounds of glass wildly swinging about from a camera strap over my shoulder.. but whatever!

With minimal dancing and rope wrangling, Kate was past both Jon and I and up to to bat.

With Kate off exploring the unknown above, Jon got his own turn of up-close-'n-personal.

As I both had the camera and was leading the next pitch, it made sense for me to be the first one up behind Kate. As opposed to when I was first up behind Jon... whoops. Stemming, crack climbing, and tenuous little feet on a face brought me next to her Kateness.

Up top, Jon wandered off to the right and built himself a definitely super bomber anchor on a single nut and hung out on a nice ledge while Kate and I got things set up on... this:

I worked my way left from Kate and had my first regrets regarding the camera on my back. It was hard to feel stable when a heavy object was randomly flipping about on my back, so far from my center of gravity. A deep breath and a bit of "don't wanna disappoint the new trad climber friends now do we Matthew!" helped tamp down my trepidation. I set off through patina'd face, wandering my way to a horizontal hand crack and then vertical fingers. What gear I did get was surprisingly good, which only made me more nervous. Uh oh. There must be a really hard part coming up, I thought to myself ... all the way to the anchors.

It's probably not even necessary to say that when I had my first and only belay of the climb I knocked it right out of the park, and definitely did not slack (see what I did there?) in favor of shooting photos. But I'll say it anyways.

Knocked that belay right out of the park!

I reckon it was just a 5.8 romp to the top. Jonny boy once again took lead and did us proud. I did myself proud, taking a tasteful butt shot as he stepped off home base.

Up at the top, all of us standing comfortably for the first time in a minute, I realized Jon was about to throw the rope. In a rush I pulled my camera around from my back and shot from the hip, snagging this one. Take what you can get kids.

Back on the ground, I relieved myself in the pond. Jon pulled the rope straight into the same body of water, then we three went home, new friendships well cemented.