A full month of Spanish limestone 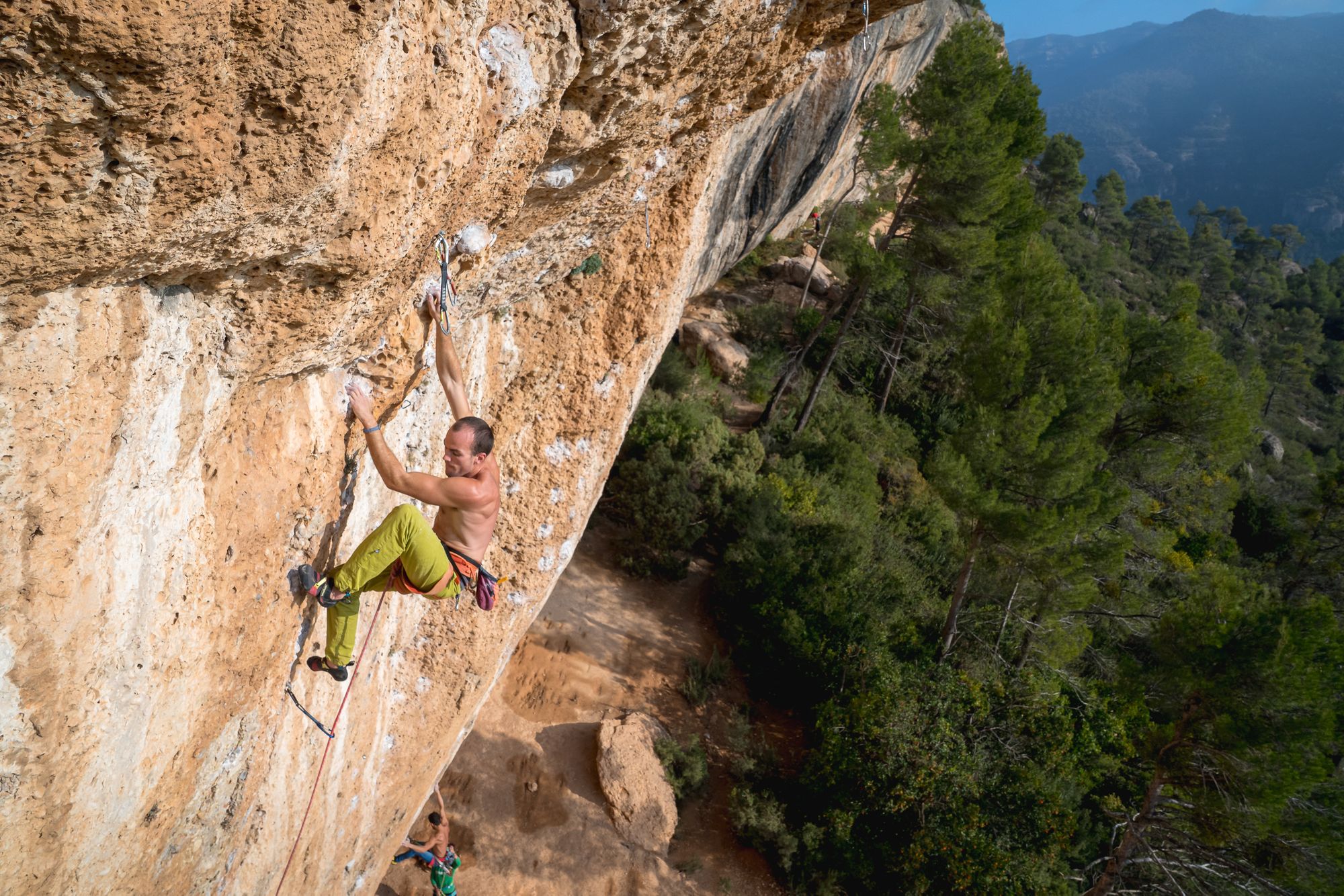 It's hard saying if more time was spent working, climbing, or drinking and eating in our month in Siurana.

Well, technically I suppose nearly all our time in Siurana was spent climbing, while our time in Cornudella de Montsant was split between working and wining (leaning in the favor of the wine, as one can wine while working, but one tries to refrain from working while wining). Cornudella was the home base, a five minute's drive from the expansive limestone cliffs that made Siurana famous with my sort of people. Even closer to Cornudella were all its sweet vineyards...

The village is small enough that everything was a short walk away - the butcher's, the grocer, the bakery, the wine bar... Our little family made multiple trips for provisions through the quaint roads each day.

Stacy and I were the first to arrive in Cornudella. We rented a small studio for our first two nights, then moved into the three bedroom house we would occupy for the rest of our time in Spain. Andrew and Georgia of Australia/Greece dirtbagged their way into a spare room the first night. When Adam and Cydney of Squamish – the pair with whom I'd originally planned the trip – arrived, we had ourselves a full house.

Stacy, Adam, Cyd and myself were on full-time job status. We'd eke in two or three pitches each morning and come home to wine, dine, and work. We all agreed to take turns cooking family-style meals in pairs, partially due to the small size of the galley kitchen, but also because that's just more fun eh.

Early in the trip, before Winter's grasp had fully enfolded our corner of Spain, members of the house would often settle onto the porch and enjoy soaking in the cool air and warm sunshine of the morning while gazing at the hills and limestone bluffs that surrounded town. As time went on and the sun rose later and set earlier and cool mists grew to dominate the mornings, it became unlikely that a member of the house would be outside for anything beyond retrieving their drying laundry before the next rain undid the sun's work.

Two weeks into our stay Georgia and Andy got the boot as their room was originally designated for Emily and Luke of Alaska and California, respectively. While the number of people sleeping in the house stayed at six, the number of people living in the house bumped up to eight for the next ten days. Ours became a bustling and lively little place, made tight with bodies and hot with Cydney's – er uh, someone's – tendency to bump up the thermostat.

The rhythm of climbing, working, wining and dining, while living with five and then seven other people in a small rural Spanish house sped the clock so that time flew by. Squeezing in day after day of climbing while also fighting to get in an eight hour workday and at least two square meals filled life near to bursting. Most days my camera stayed in my backpack as I prioritized my own climbing over documenting others'.

I think the absence of climbing photos is also due to everyone's tendency to pair up and head out. I could hardly get photos of Stacy climbing if I was simultaneously belaying her, now could I? And if I wasn't belaying Stacy, I was climbing. All of which is to say, when the glass did come out it was more likely to capture the landscape than my housemates.

When the glass did come out odds were it was Andrew getting captured - mainly because he was on the rock more than anyone else, as Georgia patiently played out rope for him each and every day (Aussies don't believe in rest days).

Every evening, if we were lucky enough to still be up in Siurana, we'd witness the sky do something magical. Siurana sits up above a valley with a clear view all the way west, meaning the sun is well below the viewer when it sets. The sky would be cast into magical hues for each of these drawn-out sunsets and we'd ooo and ahh at its beauty.

At the beginning of our stay we played in the central area of Siurana, accessing walls like Espero Primavera, El Pati, L'Aparador, Siuranella Est, and Siuranella Centre all from the same parking area.

Siuranella Est held particularly strong nostalgia from my trip five years earlier. Untying the rope after cruising up a 7a/11d I recalled projecting with a friend all those years before I thought to myself, "I'll have to tell Disa I got back on this thing and just aced it, she'll get a kick out of that." Which thought was shortly followed by the cold knowledge that she had passed away at the beginning of the year.

I'd share my memories of that past trip with a bittersweet taste as little things - like a small, split tree standing alone on a stone slab at the highest point of Siurana itself- triggered recollections of time with "Little D". Stacy was a sweet friend with a good ear and always a shoulder to lean on.

It was the unexpected familiarity of a bus under the Barcelona Airport that hit me the hardest. D and I only caught up with each other infrequently, two or three times a year. A naive part of my subconscious preferred the fiction that we just hadn't spoken to each other in a while to the reality of her passing. That bus ride to town somehow drove a spike through that illusion.

Emily and Luke arrived in Cornudella in synchronicity with the arrival of winter. Precipitation and a desire for new venues set us to trying the cliffs off the backside of Siurana.

We found dry stone under a large roof cap. Not long after roping up the sun began finding peep-holes through the enshrouding mists.

When Adam and Stacy left for an early start on work, I found myself third-wheel to the Andy and Georgia show. My camera and I walked along the cliffline, admiring what the fading light did to the foliage.

We three took the long way home, stopping for the vistas down into the central valley.

Tarragona, the province in which Siurana resides, is chock-full of rock. Siurana's hardly all that's on offer. Ready to try something else one weekend, we took ourselves to Margalef and its legendary conglomerate pocket-pulling.

The morning started as most had that week, shrouded in mist. By the time we arrived at the cliff things had cleared out though.

Two mediocre warmups was all the time the weather needed to completely flip on us though. Stacy and I hopped on a 6c pocket puller that was terrific, but I was screaming and crying at the top as my fingers froze off my hands.

Two hours later I could make out a shining orb through the greys, and was ecstatic.

I got on a 7b+/12c dogged my way to the last bolt. I climbed through the 6m runout to the chains, stared at them for a while, and then took the biggest whip of my life. On the way down – which lasted a good while – my eyes locked onto my tiny belayer. When the rope finally went taut, Stacy essentially teleported from the ground to the second bolt, where I'd hung my first quickdraw. Yikes. She made it through without any substantial injuries, thankfully.

I told Andrew he had to get my draws down for me, and in exchange shot him off the top two bolts of my route as he climbed a 7c+/13a nextdoor.

Stacy and I wandered to the furthest edge of the cliff, looking for a place where should could get some exercise banging out pitches back-to-back.  We call it "running the puppy."

We continued to enjoy Spanish sunsets there.

The Aussies left, and then the Canadians, and it was Stacy, Emily, Luke and myself in the house. Our last two days of climbing Stacy and I found the perfect weekend hideout in Arboli, where an absence of easier routes and a ten minute approach must have kept crowds at bay.

We were stunned at the view. The Mediterranean reflected the sun's brilliance at us from the horizon with the city of Tarragona swallowing the coastline and small villages and farms dotting the land between us and the sea.

Stacy shined at this wall, putting up hard routes left and right. We found a 7c/12d here that was well suited to our strengths - 30m of overhanging crack climbing into a hard crimping faceclimbing crux while you're pumped out of your mind. Well, while I was pumped out of mine. Stacy doesn't get pumped.

Our second day at Arboli was our third day on, the second and third being two of our try-hardingest days of the month. We pretended that a single rest day would be enough to let us go climbing again on our very last day in Spain. Our projects at L'Aparador and Primavera showed us just how wrong we were. We both giggled endlessly as we and our fatigued bodies got heartily spanked off the routes. Essentially, we ended our stay just as we started it. Bad at rock climbing.