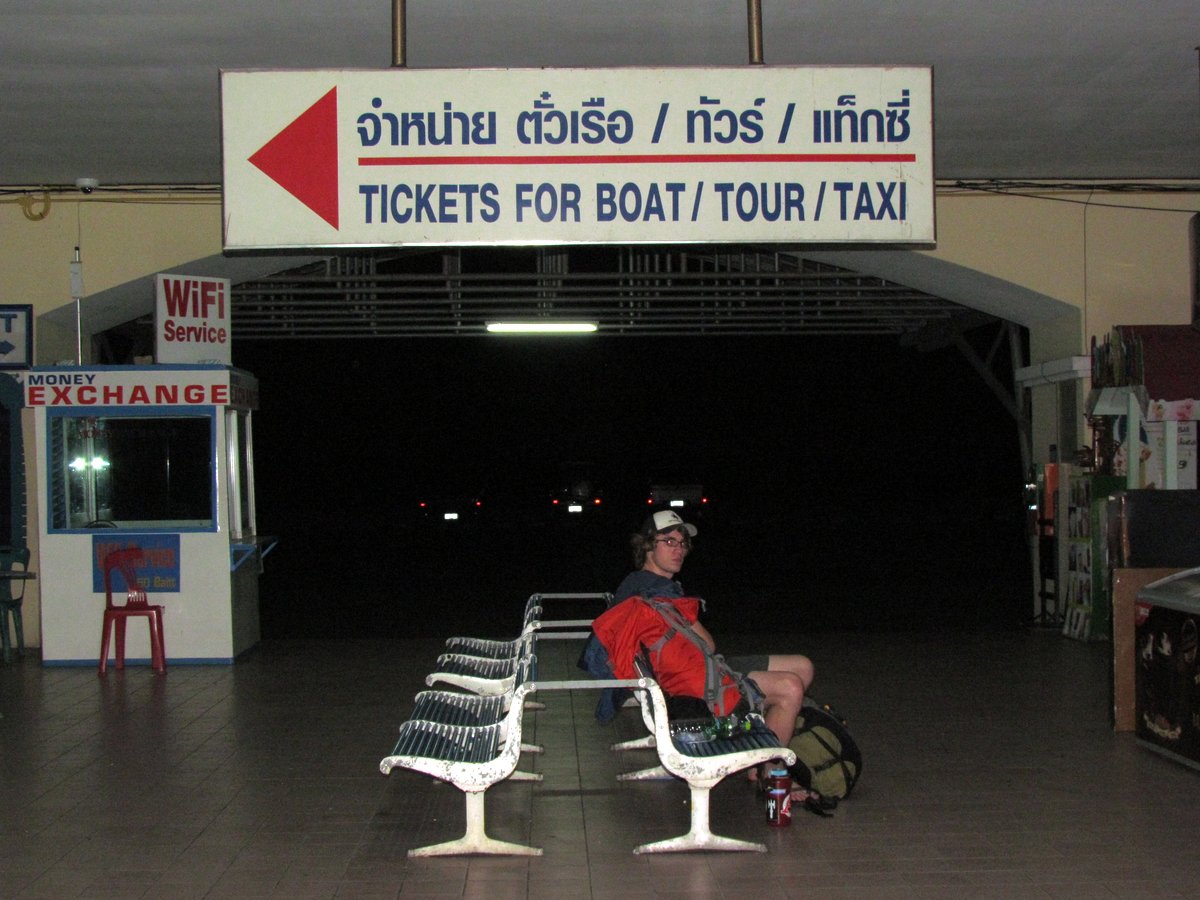 "Please," a breathy, whispered plea sneaks out from my lungs.

The last of my strength and courage launches me off of the wall I just spent the last, how long was it?, struggling and fighting up. Up to my left, and slightly behind me, is the tapered tail, no thicker than I am, of a massive stalactite that starts a hundred feet higher up Thaiwand Wall.

My hands had already ran the course of its smooth surface over and over again; its only offering was a knuckled protrusion I could balance the big toe of my left foot on, good for counterbalance and not much more. My only hope was that further up the rock, beyond where I could reach, was something that would offer my overworked fingers purchase.

As my body twists to face the bay and I step out onto nothing, my view changes from the limestone wall to the entirety of Railay, laid out before me.

Three hundred feet below, Railay Bay dances in the sun, tropical rays sparking off its glistening blue shallows. Longtail boats cut white lines across its surface, their cacophony reaching me as a muted echo of a roar after bouncing off the cliffs that encircle the waters. That buzz is the only reply the world gives me.

This should not have been so hard. Why is this so hard? God I'm exhausted.

Maybe this was a bad idea.

It had been 60 hours since I had slept lying down.  A day had passed since my last real meal, and I've had nearly as much beer (a Chang on the boat in) as water today. And yet, I was climbing the hardest route of my life. My journal entry for the 16th of March sums it up with the line: "This may have been a mistake," and, after a few pages summing things up, "What a fucking day." (If you'll pardon my French)

It's hard to decide where, or when, rather, I should start my Thailand posts. The trip from Denver to Tonsai left us a bit disconnected from time. The flight in to Beijing was long enough that I found myself looking forward to the meals not because I was hungry, but because eating was something that would break the monotony. The airport itself was huge and empty, and surrounded by a perpetual smog we never saw beyond.

Eating was also a tool that helped us pass time in the cathedral-like Beijing airport, where some Japanese travelers were nice enough to take a picture of Ken and I indulging in the fanciest Pizza Hut you've ever seen. That was our last meal before breaking ourselves.

On the flight from Beijing to Phuket my phone's alarm went off letting me know I was about to miss an afternoon math class back in Laramie. Outside, over the Phuket peninsula, it was half an hour past midnight.

Through my window I could see road lights turning towns red and yellow, with cool blue highway lights scattered randomly in the darkness between them? This is from my journal entry for the 15th, flying into Phuket, where boredom had me trying to be fancy with words:

In places the water of the coast glows golden from the lights of a town on the bay. Small islands just off the coast are visible as starkly dark shapes rimmed in halos of glowing sea water.

The sea stretches out to the horizon until it's obscured by the clouds of a lightning storm, lit violently and sporadically from within, each strike burning gold fire for the briefest of moments. Some are immediately chased by more strikes, greedily and lazily using the same paths their predecessors burned through the sky, creating a strobe at the edge of the sea.

The clouds aren't thick though, and so a roving gaze sees them for only a few moments before it reaches the horizontal to the craft and is met with a naked night sky pierced through with stars.

Two hours til we land in Phuket.

192 hours of climbing, eating, and sleeping until our flight back to Beijing.

Yes, that's how I actually write in my journal.

We were off the plane by 2AM, and I was nearly the last person to make it through customs. A year before, during my first trip to Thailand, I had lost my passport to the sea. I then had to go through the arduous process of getting a new, temporary (read: one year) passport from the US Embassy in Bangkok, and then working through the Thai bureaucracy to get my visa replaced. My passport was going to expire about two weeks after I was already planning on leaving Thailand, but it caused the immigration processor quite a bit of strife to put me through. He did eventually give me my stamps and send me off though.

Ken and I had to work the crowd of taxi drivers to find a ride to the pier at a reasonable price, and just as we were giving up on finding one until morning, we found a guy who'd take us out for 500 baht (the first price we were given was 1400).

We had nothing to do but wait at the pier, and that's where the picture of me trying to sleep on a too-short bench comes from. Ken made friends (much to his distress) with a mut whose pregnant bitch hid in a darkened stall.

The sun coming up started the day that would end with the climb at the top of this post, but I've gone on long enough for now.