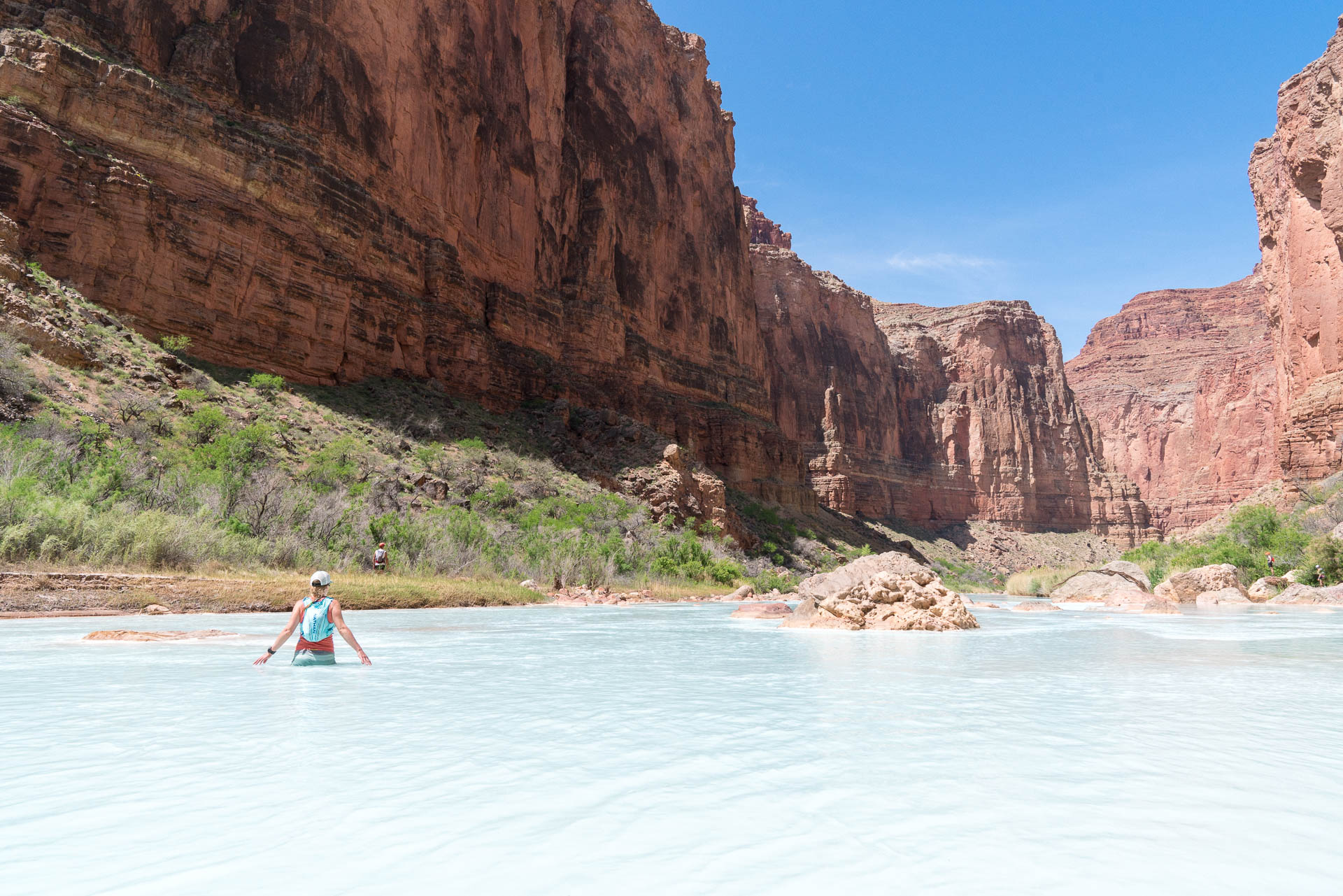 Do your kids do stuff like this with you?

So this isn't a hike.

Uhhh... man, really using my words against me there. 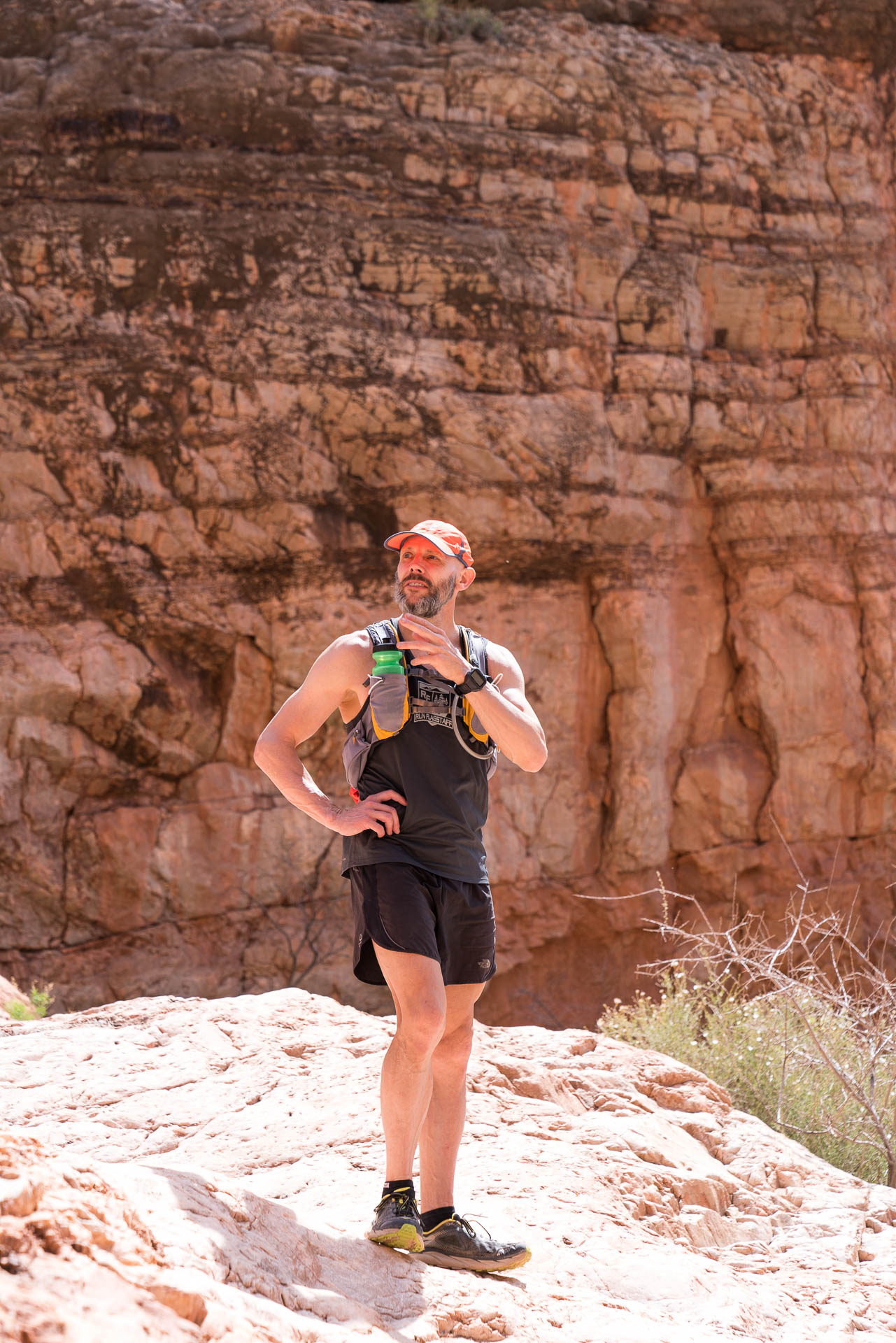 Todd had invited me to go on a different sort of adventure from my norm. Knowing what I did about Todd and his chosen form of masochism, I double checked. "By hike, you mean walking, and not running, right?" Over the next few days I asked various forms of that same question, and each time received a reply in the affirmative. Definitely just hiking. Definitely. It'll be a long day, but no running, for sure. 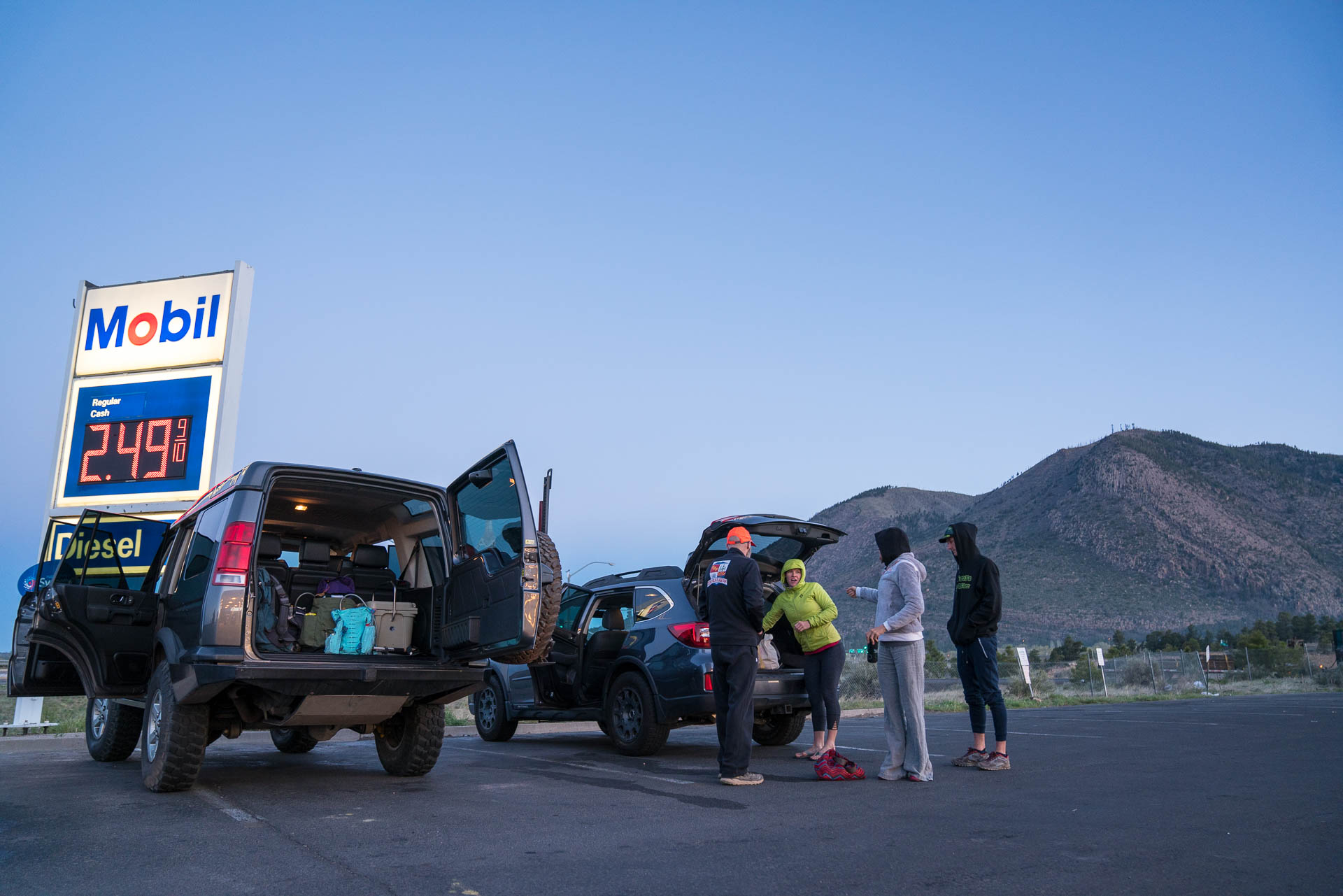 Todd and Sean picked me up early in the morning. We met Christina, Emilee, and Buck at a gas station just outside town. Michael and Jesse came up from Sedona and the eight of us split into two vehicles and hit the road, Grand Canyon bound. Our goal was the confluence of the Colorado River and its tinier sibling, the aptly named Little Colorado River.

Like Todd, my six new acquaintances that morning were members of Flagstaff's soft-speaking, big-stick-carrying running community. I would have been intimidated, save that I knew: there would be no running on this hike. Definitely not. 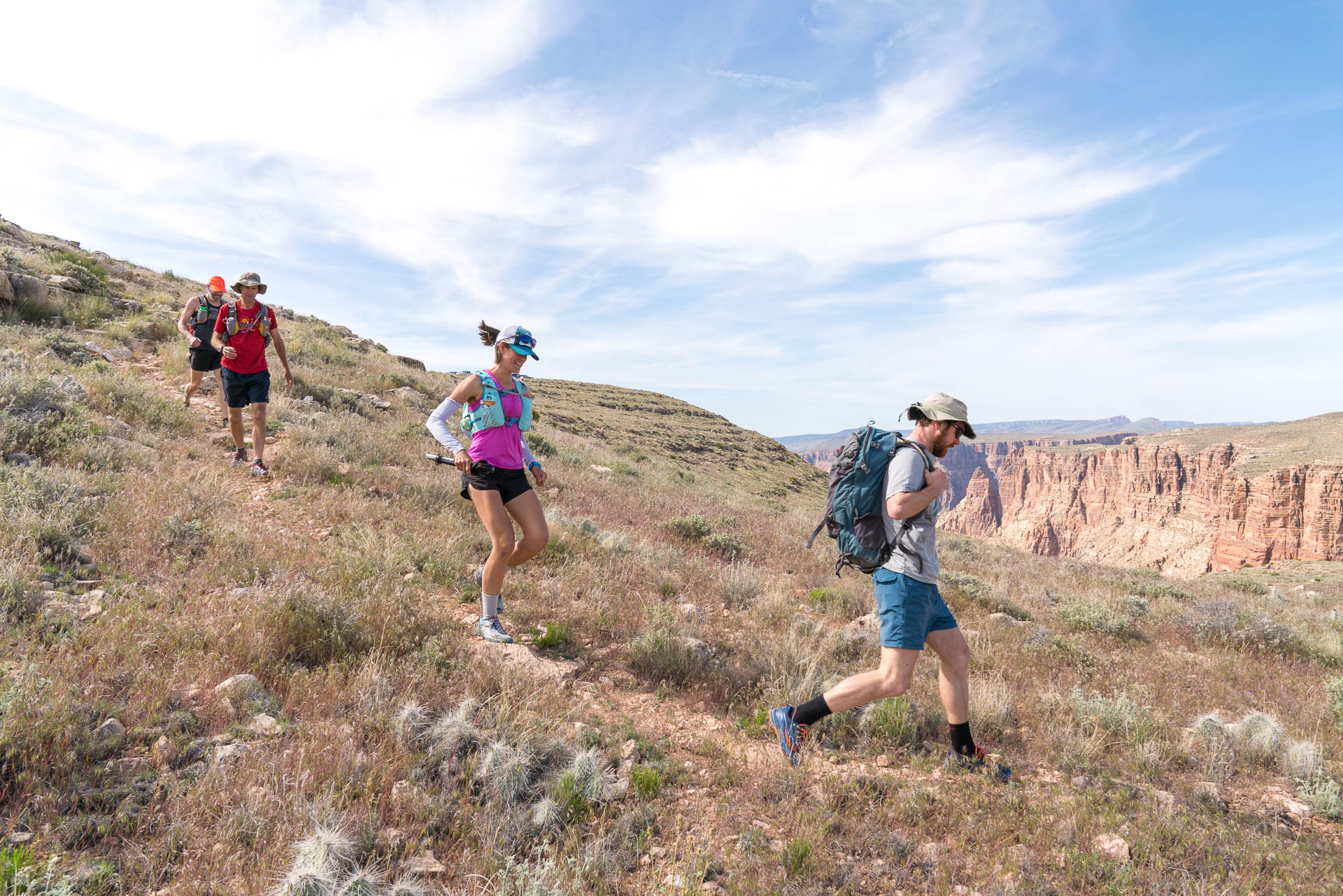 I learned a valuable lesson that day: never trust an ultrarunner on matters of perambulation.

The early start was a wise choice. We followed directions from an old blog post found on the web. Our legs got stiff as we drove back and forth across the reservation, second-guessing ourselves at every turn (save when we were taking the wrong turn, of course). I think I took at least three bathroom breaks as we tried to figure out how to get where we wanted to go, not to mention where it was we wanted to get to.

In the end, a nice offline map app of Christina's and some deductive thinking got us on track to at least a canyon's rim. We drove the wrong way along the rim for a good ways before doubling back and finding our trailhead. 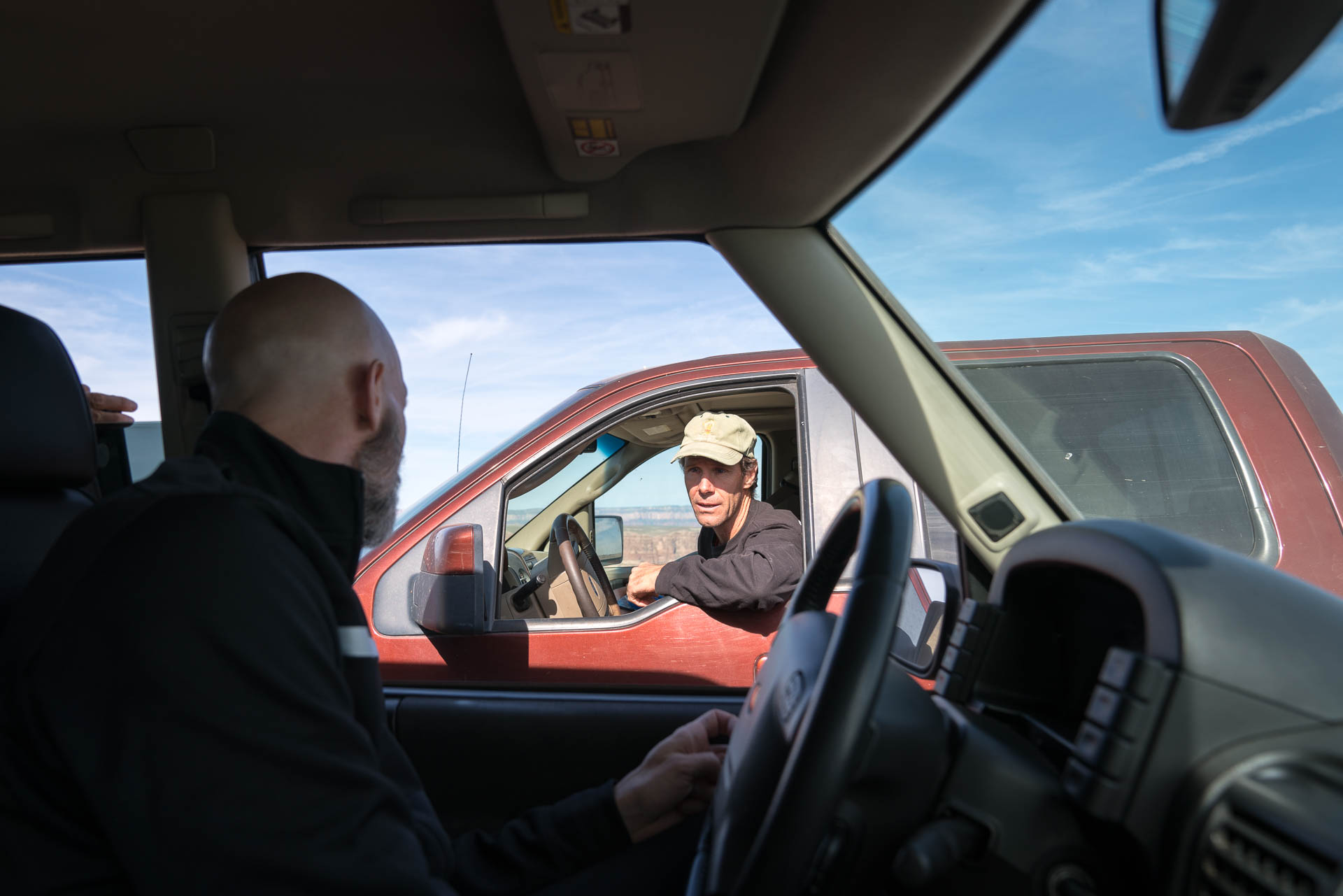 Todd and Jesse discussing where we might have gone astray 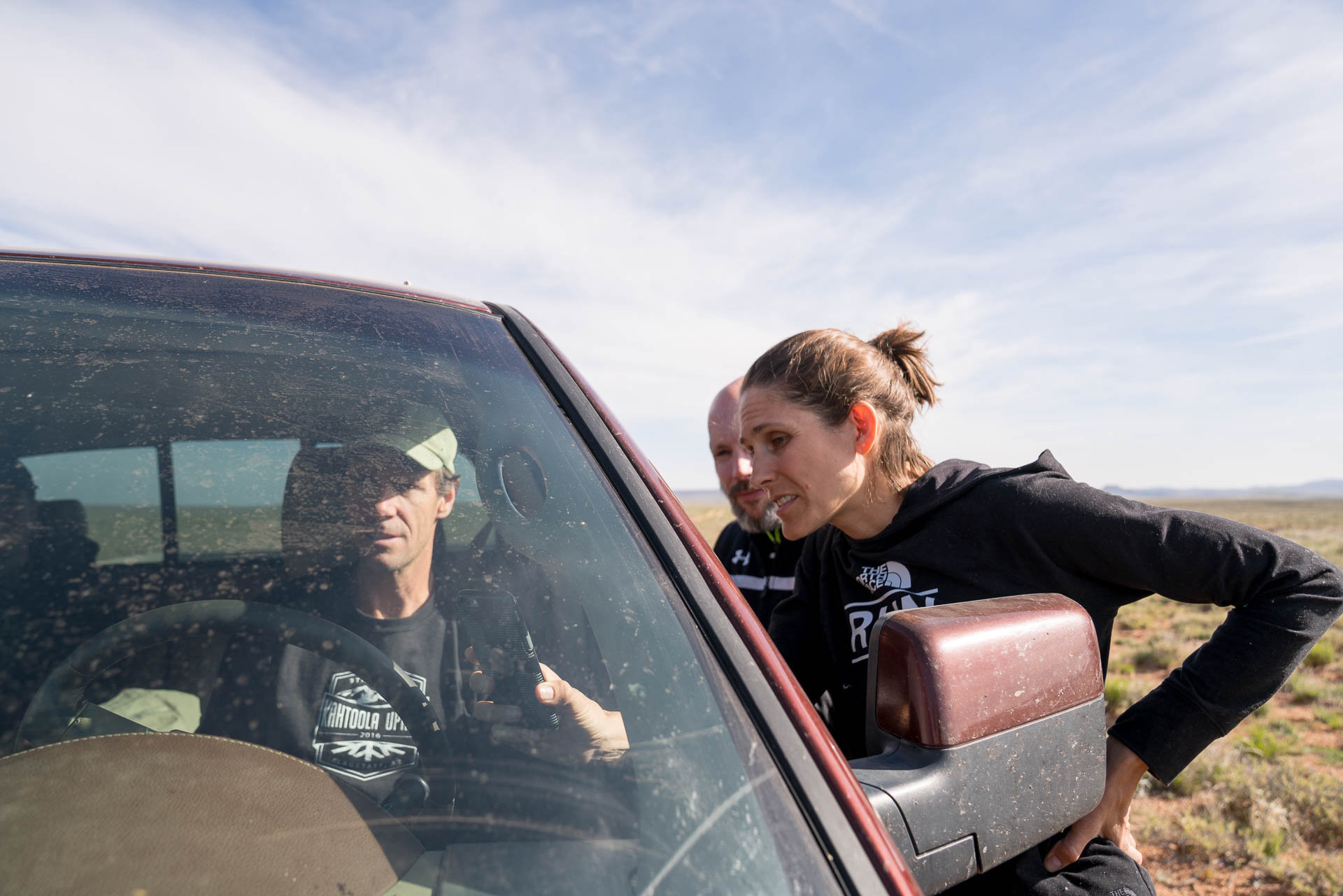 The Seven Ultrarunners, excited to have finally arrived and be able to stretch their legs, set to work immediately breaking Todd's promise to me, Snow White. 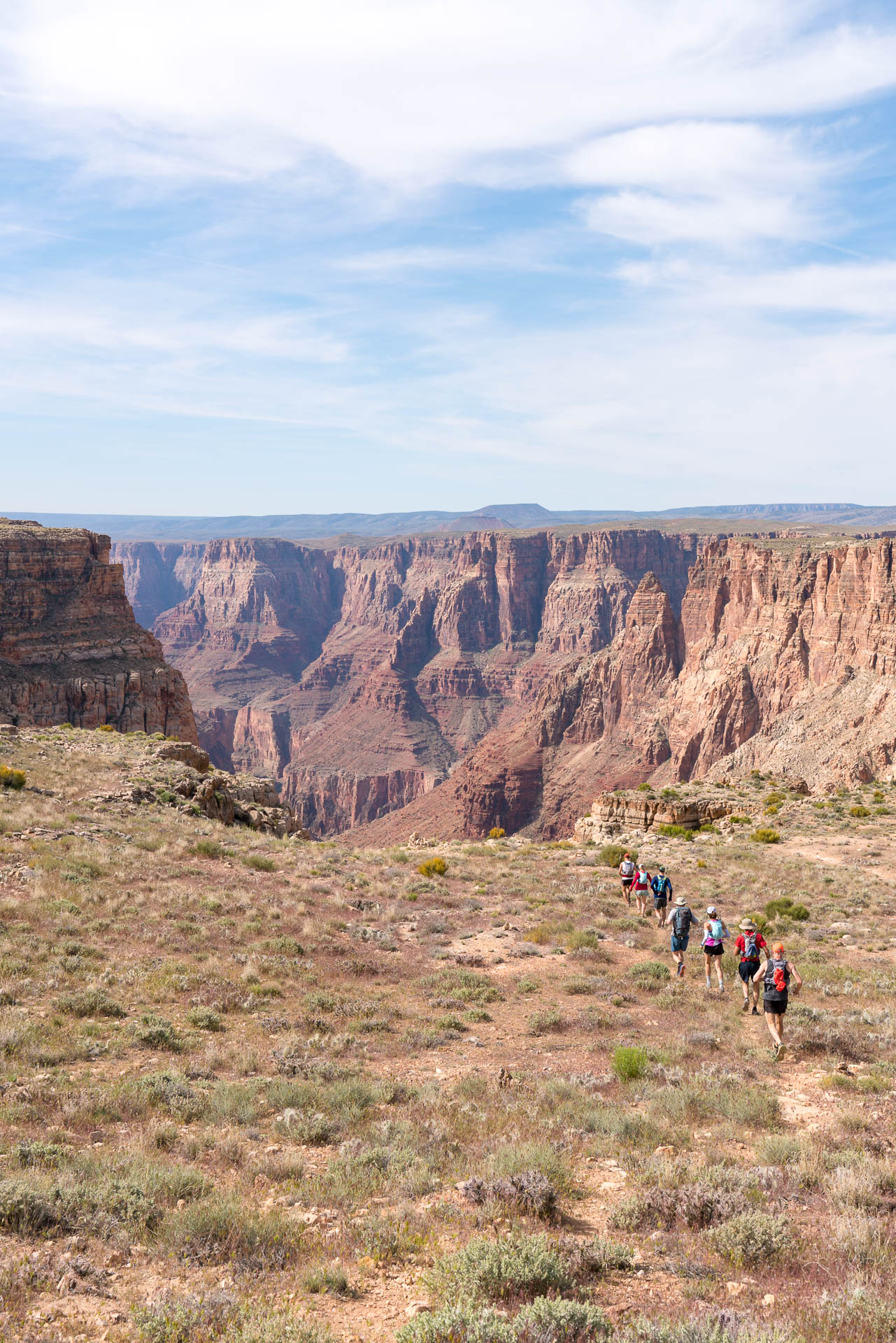 It had been three years since I'd last found pleasure in running for the sake of running. But the stoke of seven people doing their favorite thing was contagious, and run I did, five pounds of glass in hand.

Things slowed down at the mouth of the canyon, our steep entrance into the world below Arizona. Fourth classing down into an offshoot of the Grand Canyon was hardly different from coming back down off a peak in the Tetons. 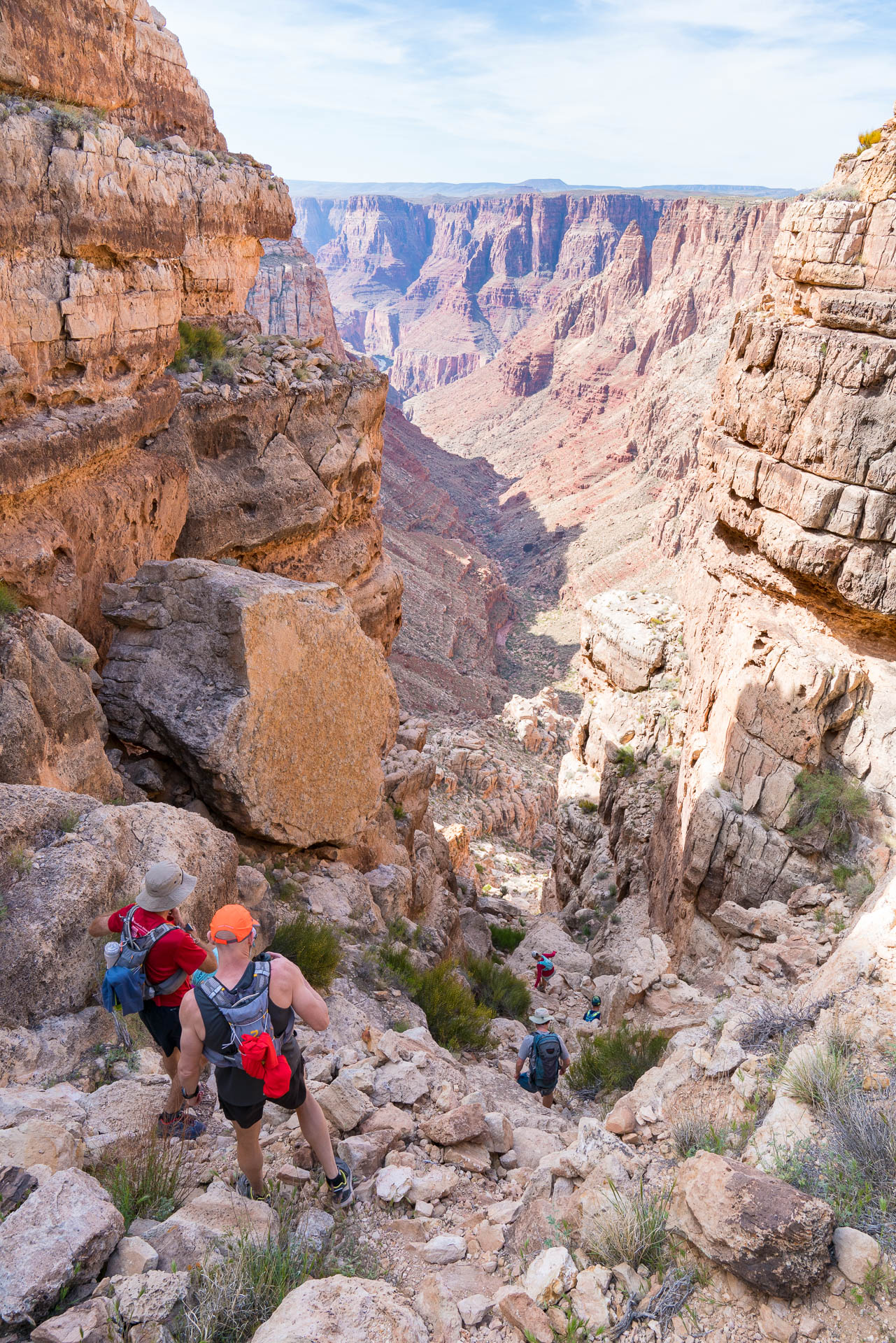 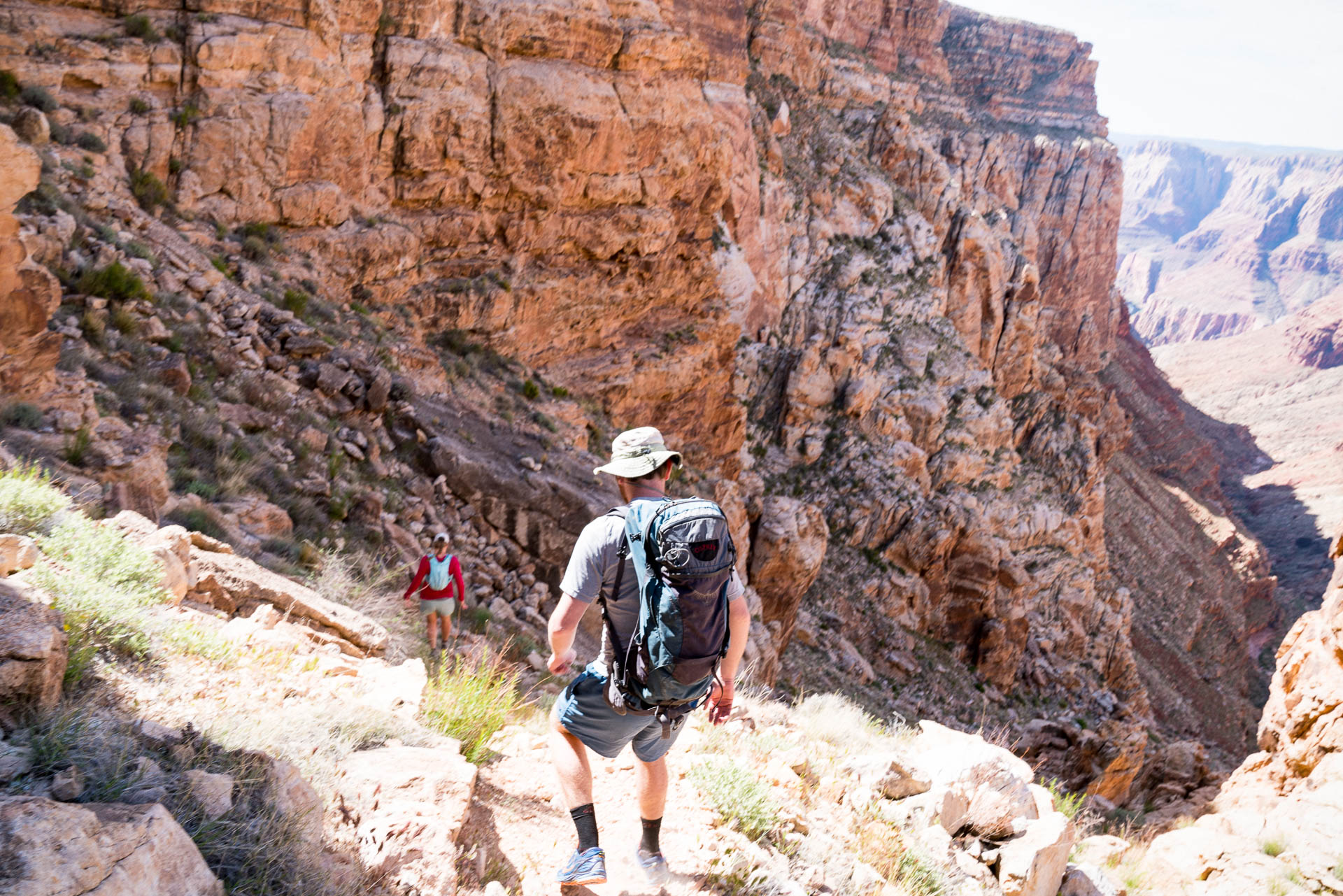 Sean, with a hiking backpack and hat, proving that I wasn't the only one who was lied to

The pace set by the group varied with the terrain - though Michael disappeared early, not to be seen again until we reached the Little Colorado River (LCR). In flat, surefooted terrain the practiced runners set an easy, loping pace that even a rock climber, trained in masochisms vertical but uninitiated in the ways of horizontal self-loathing, could sustain.

For a while, anyways.

When the trail turned wily we switched to a normal approach pace, and I caught my breath. My confidence that I could keep up grew. I knew I couldn't do ten miles straight, but I could sure stop-and-go ten miles. And we were only doing maybe eighteen total? 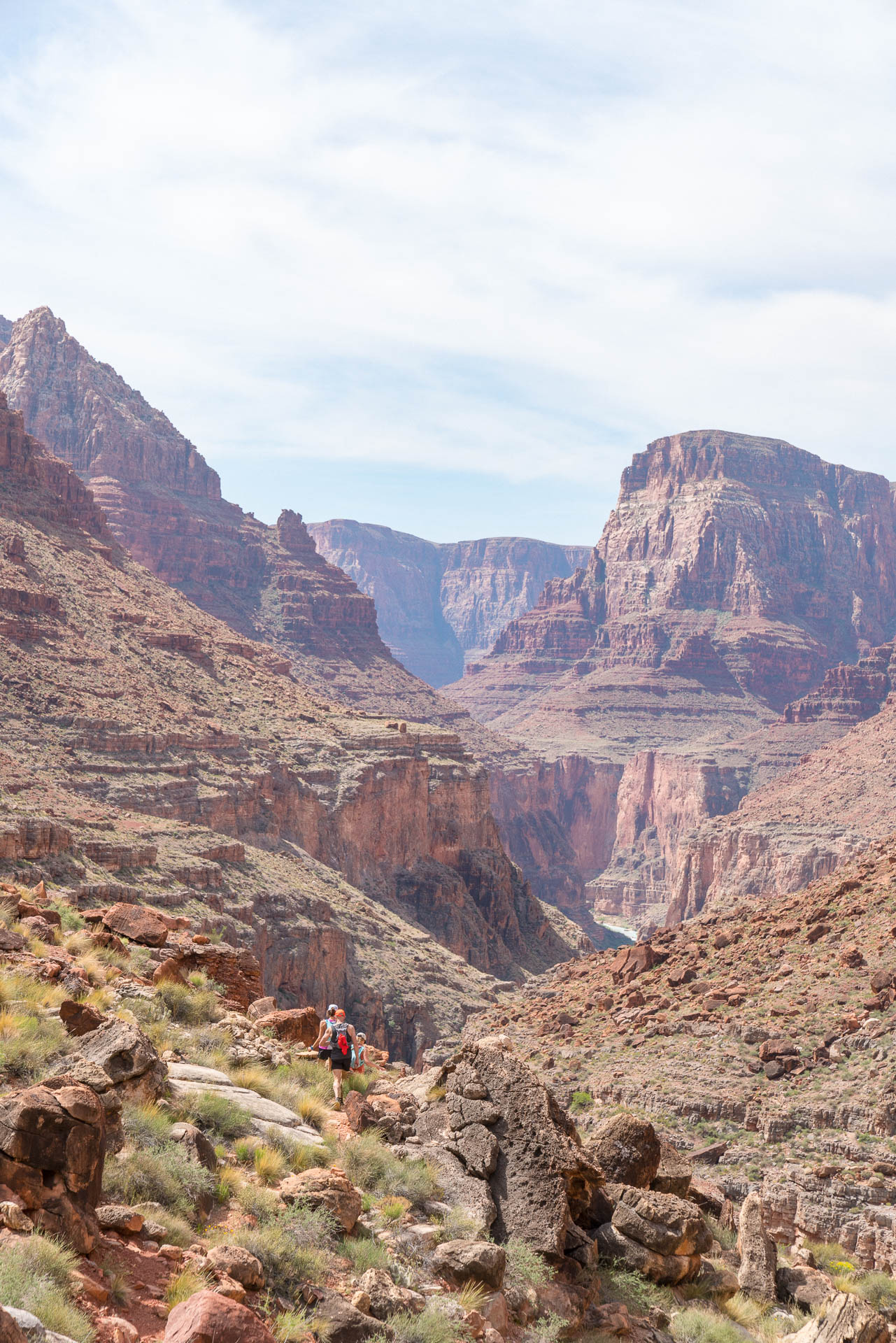 First view of the LCR in the distance

After three miles of descent we reached the Little Colorado River. All that was left was to follow its flow to the Colorado River (and Grand Canyon proper), spend an appropriate amount of time being impressed, then reverse course back out.

Shortly before reaching the LCR, I asked Todd if his kids ever went on these sorts of adventures with him. He talked himself out of his pretense that we were merely out for a "hike." 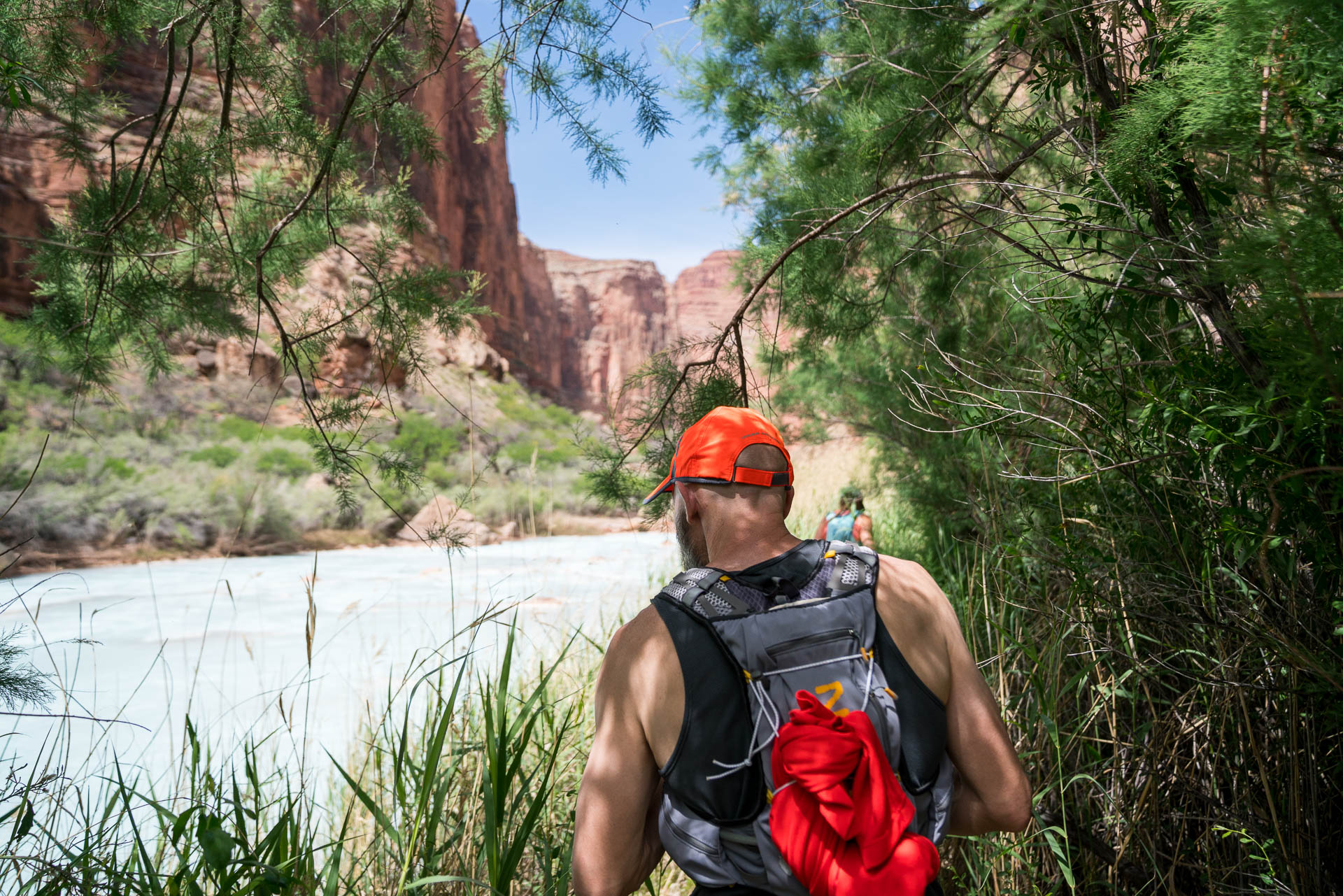 Still, things seemed good. We traded the cool shade cast by north-south walls of the Salt Train Canyon for the shallow, opaque waters of the LCR and the cool, lush greenery it supported. Our meandering path frequently cut into and across the turquoise river. 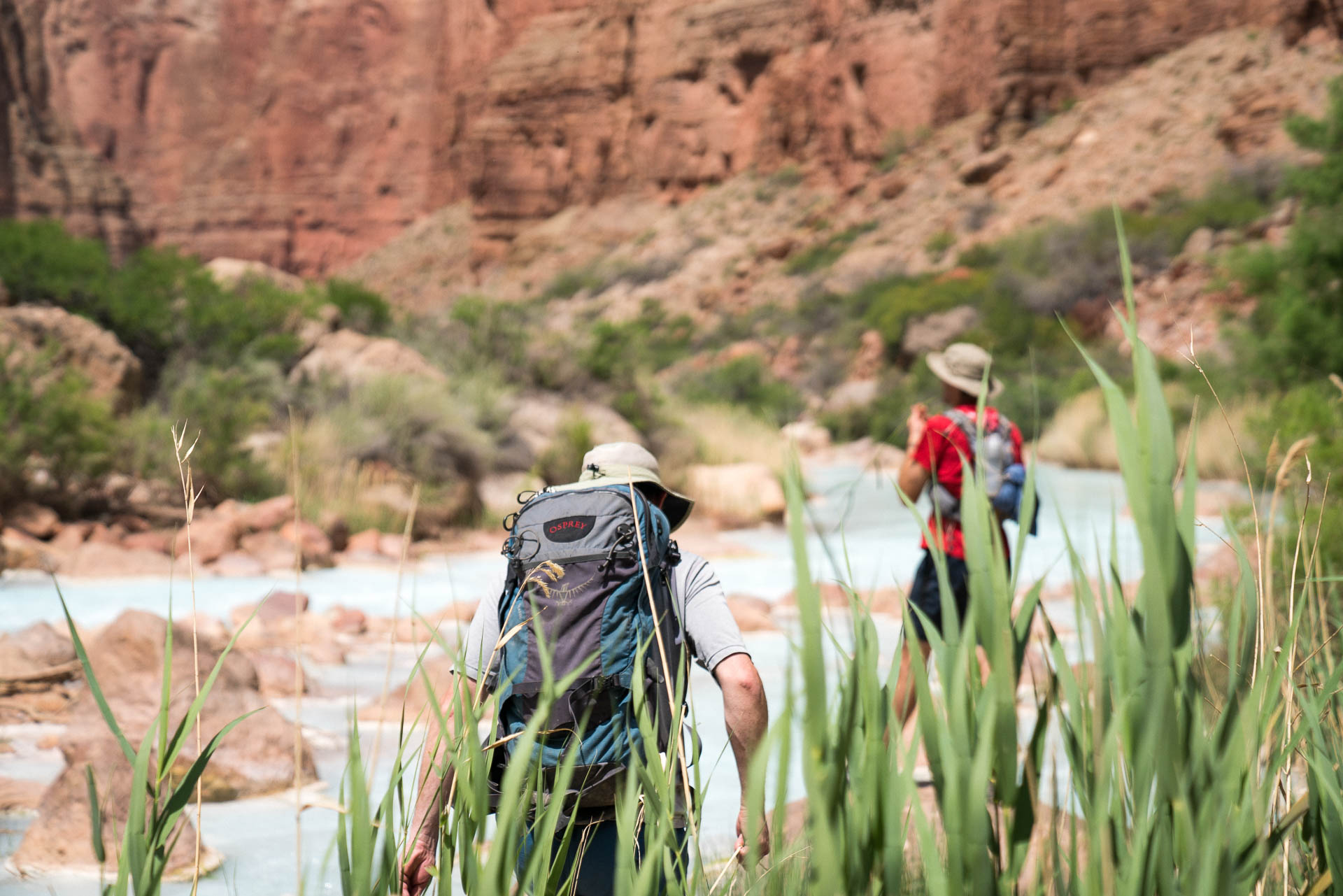 Sean scouting for a way across 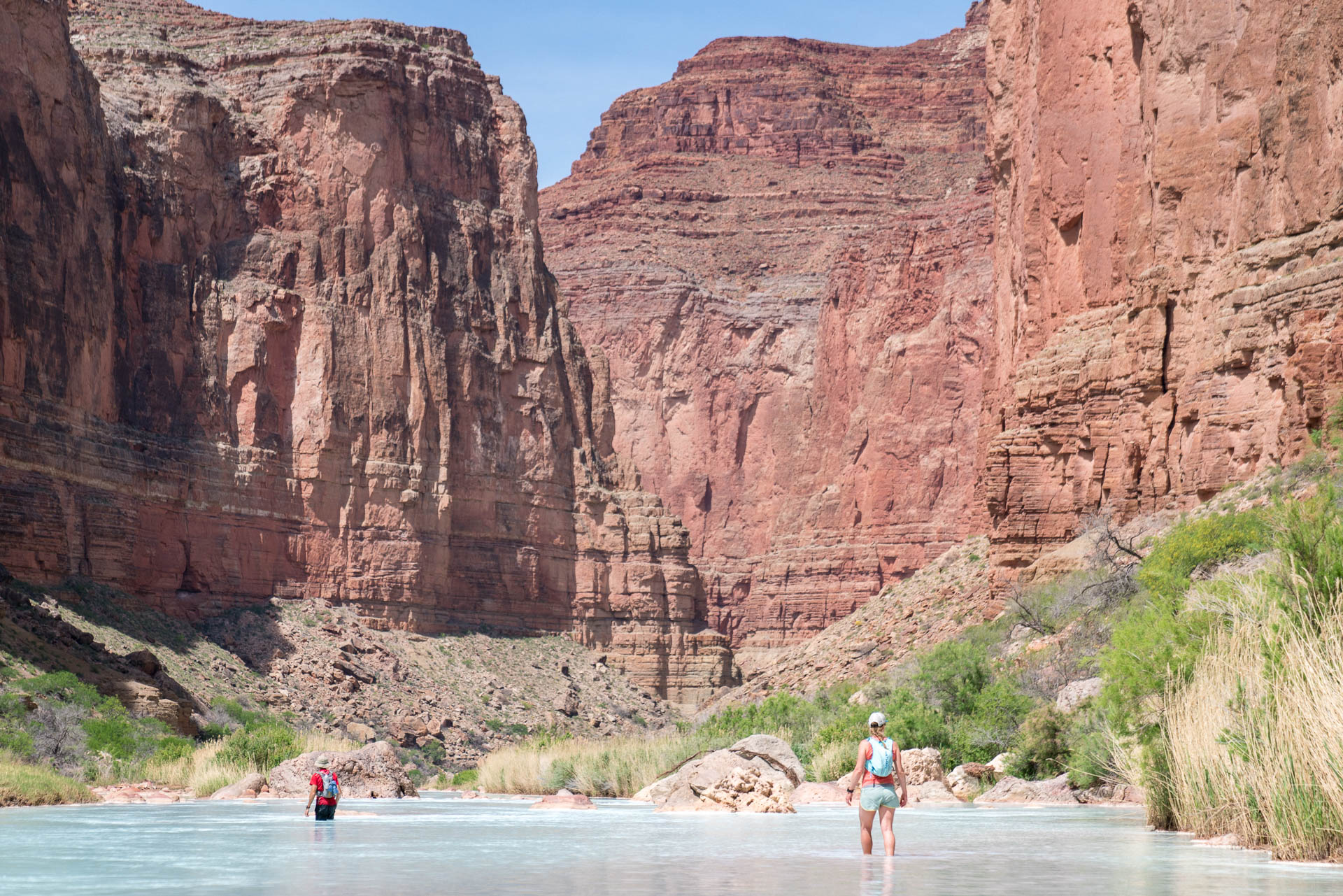 The group stopped for a rest at a series of terraces that emptied into a slow moving pool. We snacked on top of a large boulder at the edge of the pool and cooled off in the waters. 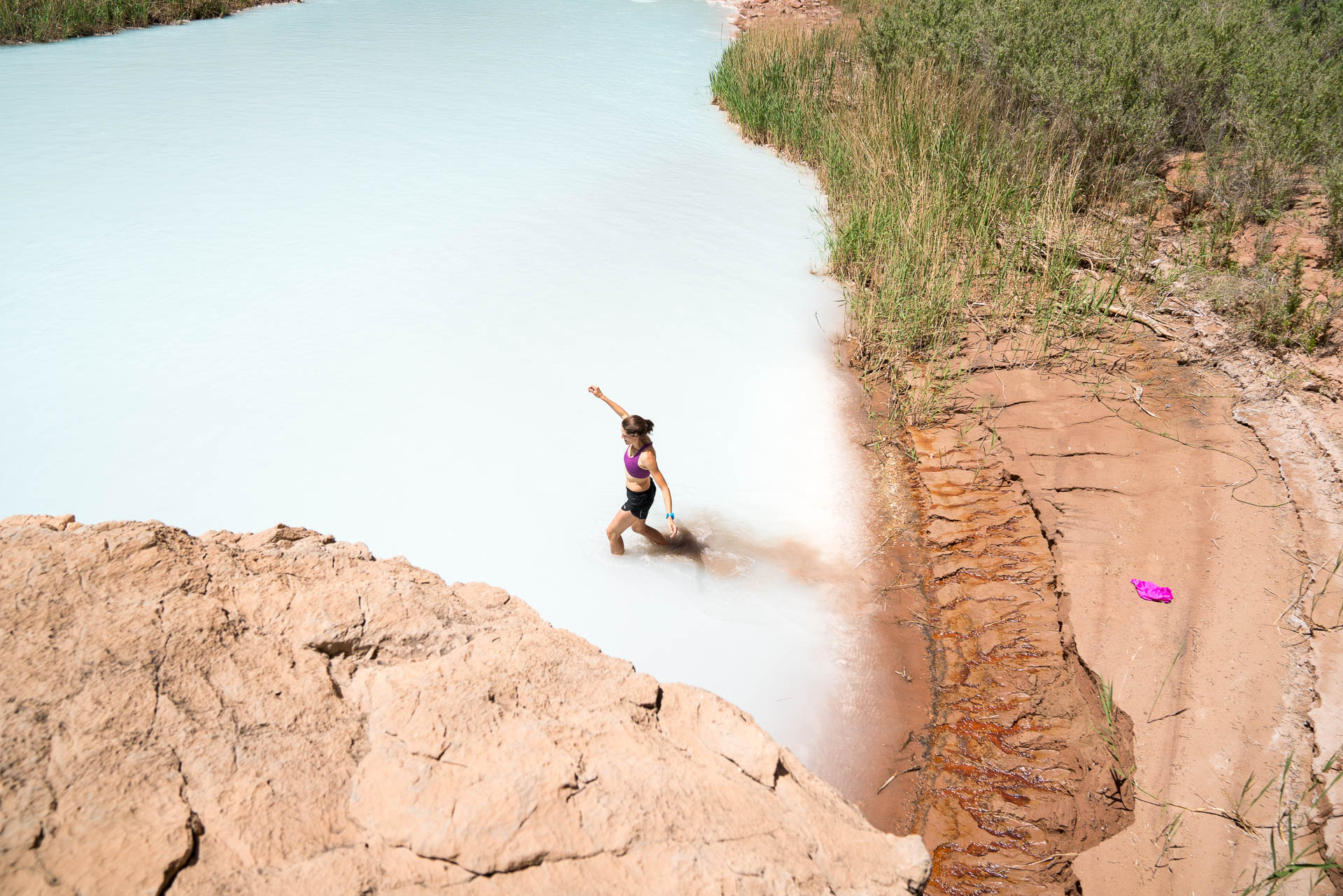 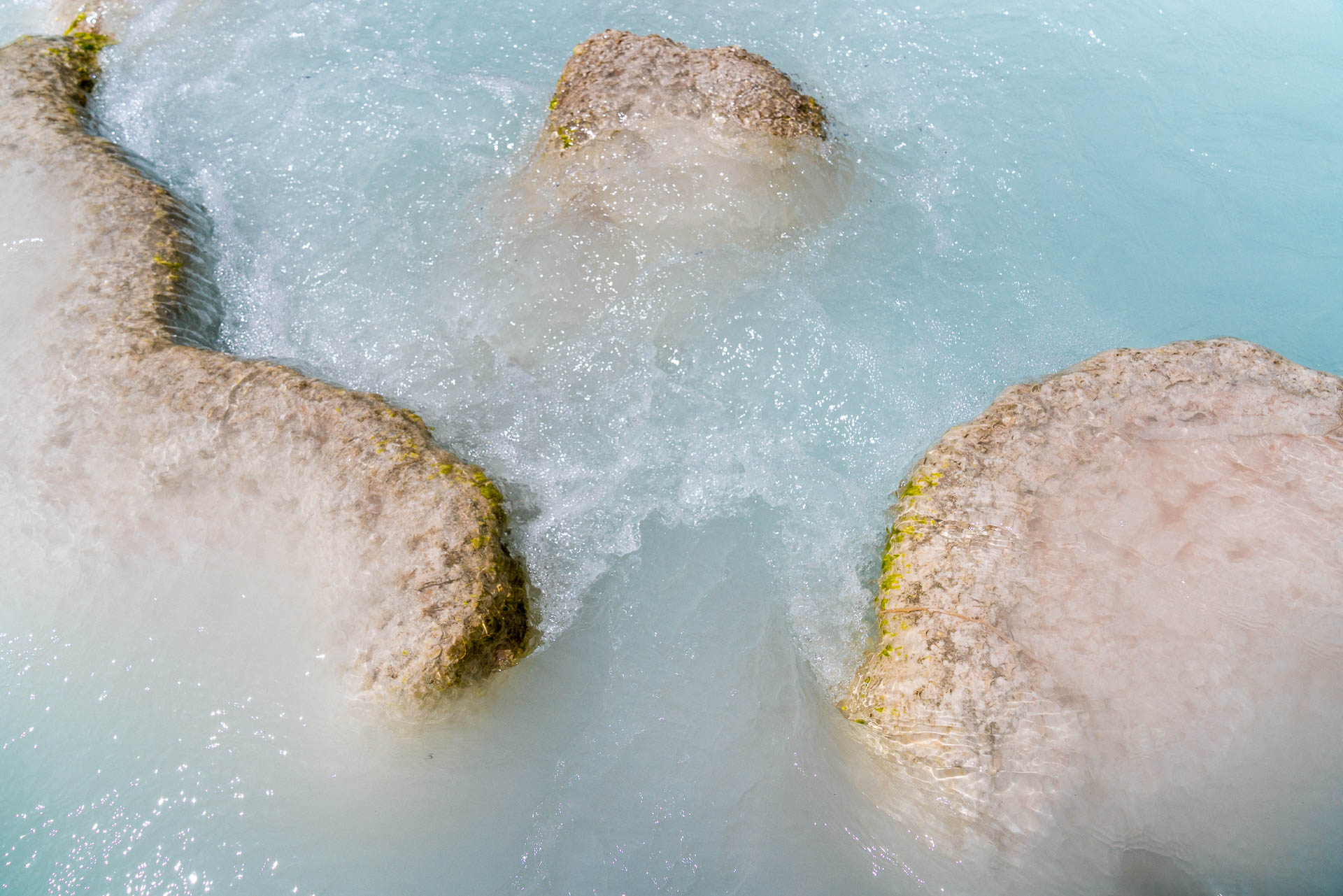 And then we were off to the races, and then slowing for waters, and then running, then walking, then... 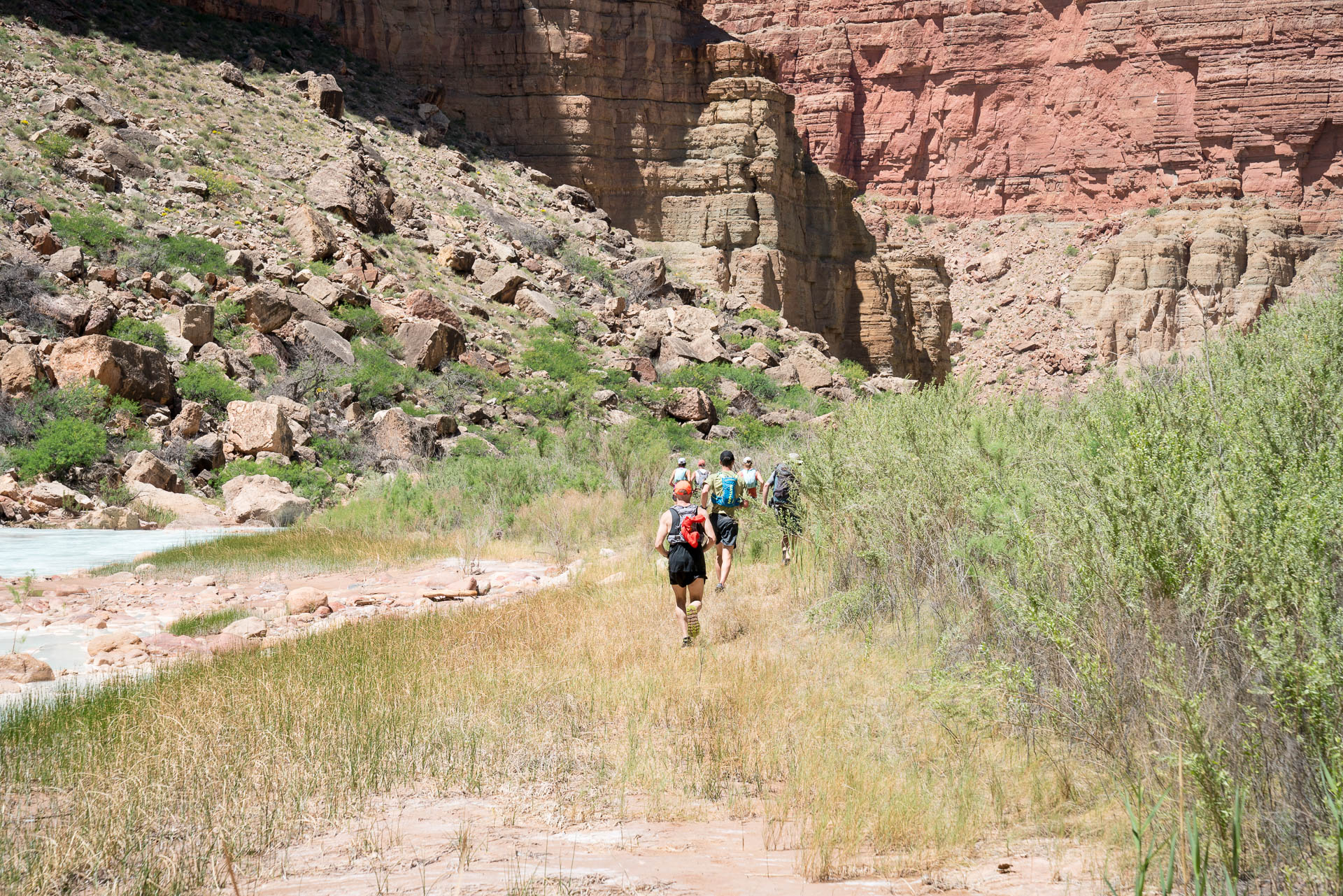 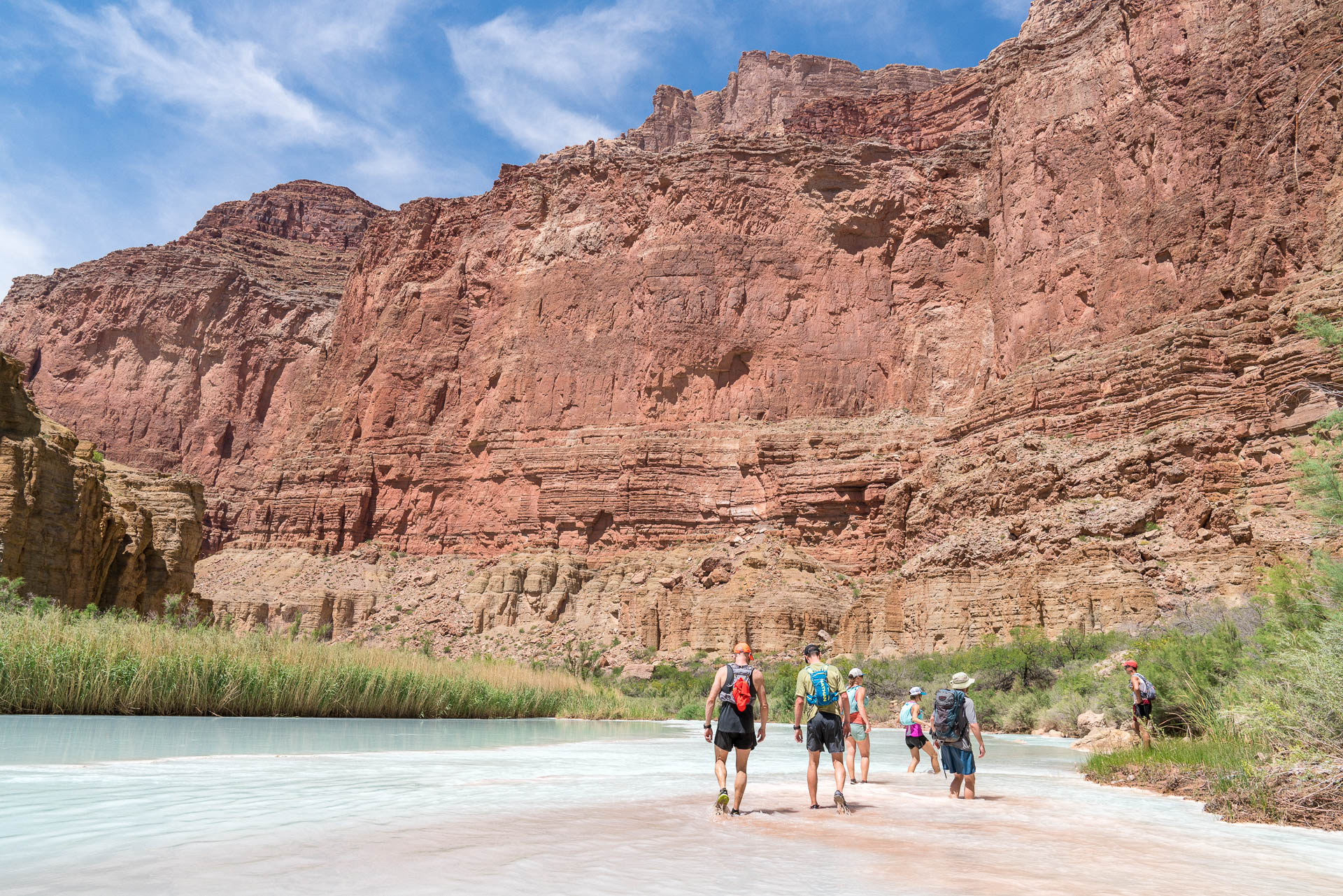 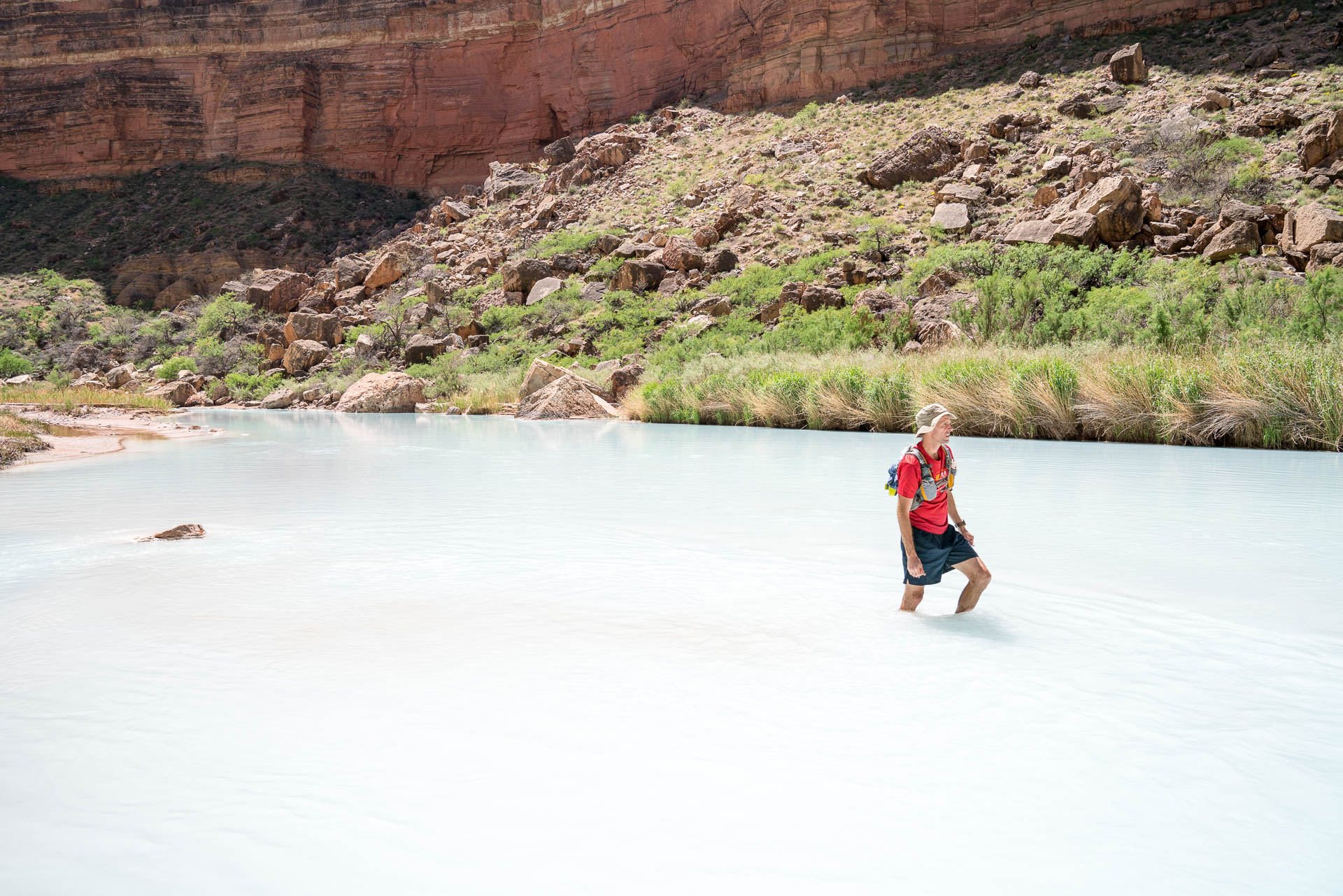 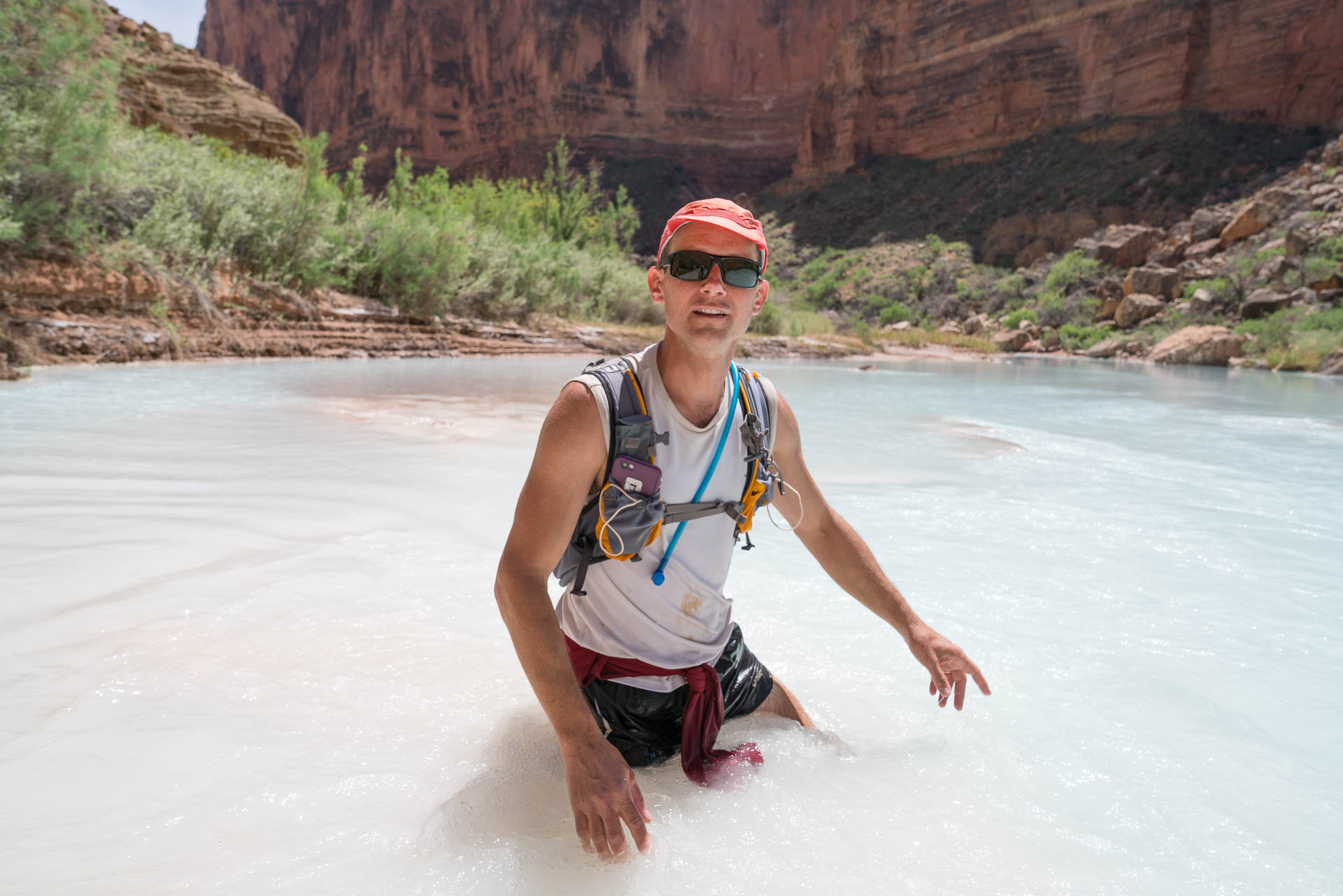 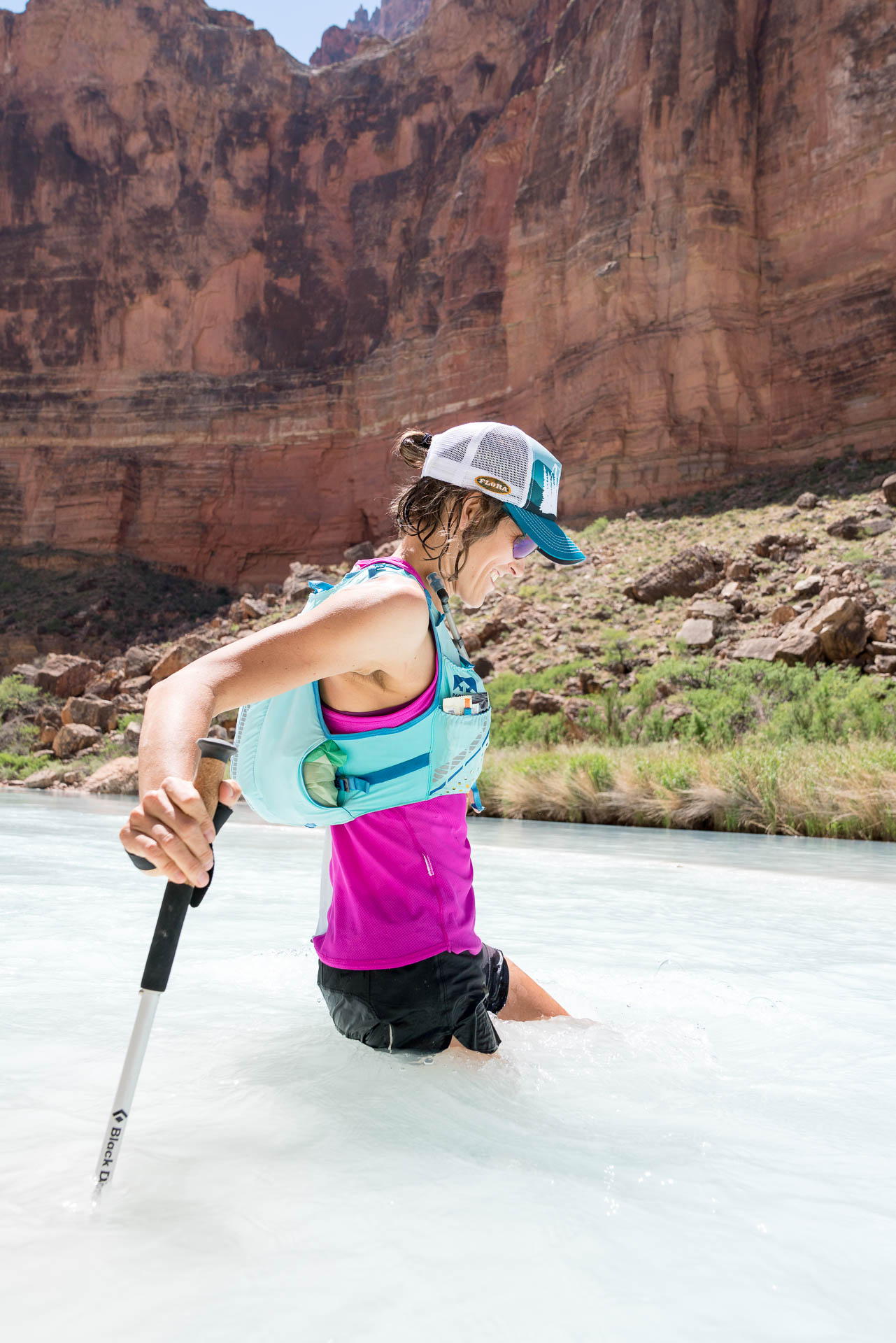 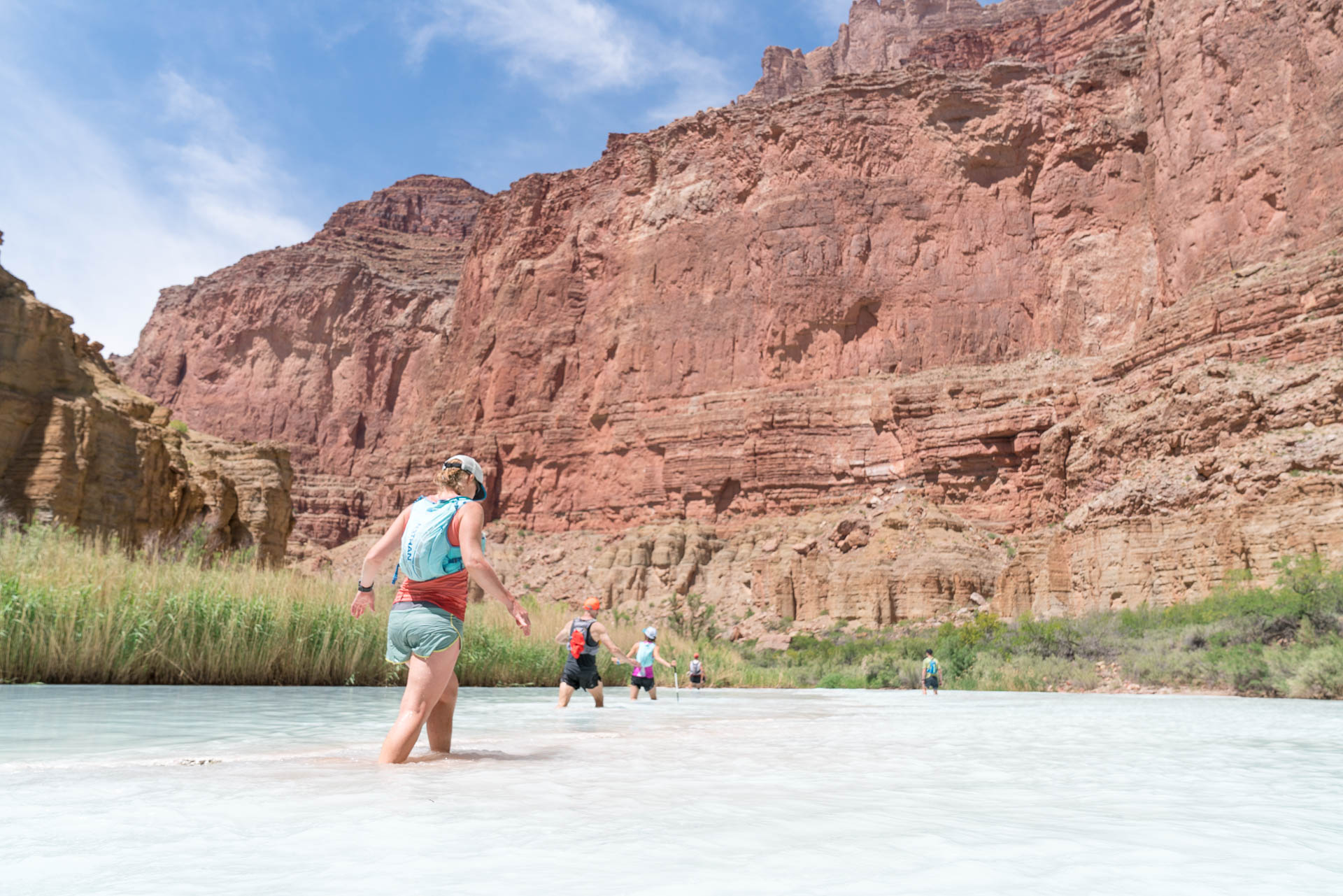 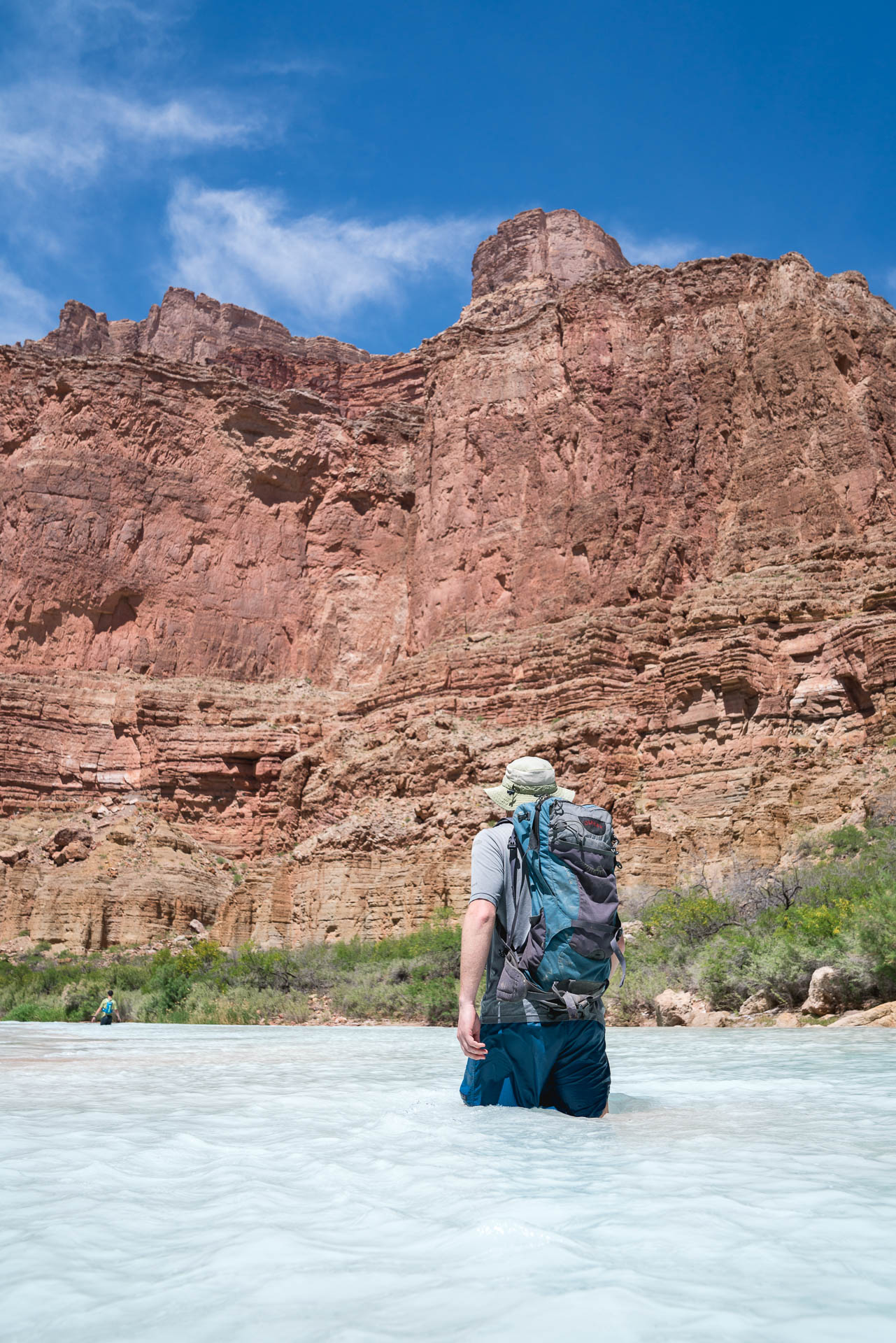 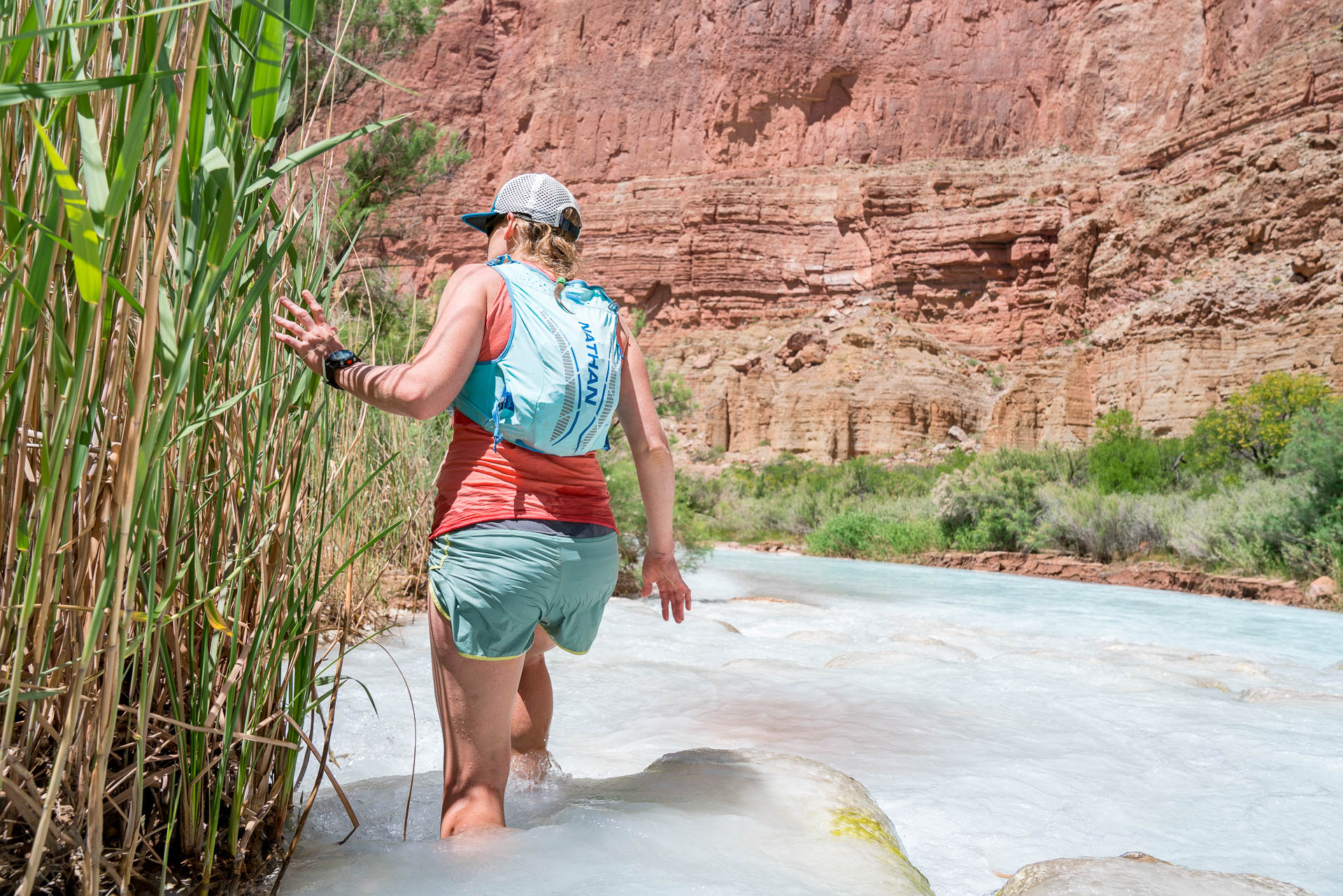 We stopped again to view a hot springs / mud pot / fabled origin of the Hopi people. It was beautiful and, for me, reminiscent of Yellowstone, albeit in an entirely different setting.

As the miles went by I saw less and less of my dwarves. Snow White's legs weren't quite up to the task.

Just as my mind began distractedly wandering through its translations of my leg's pains I was surprised to run into a group of strangers clad in lifevests. Tourists dropped off by their river guides.

The confluence was near. 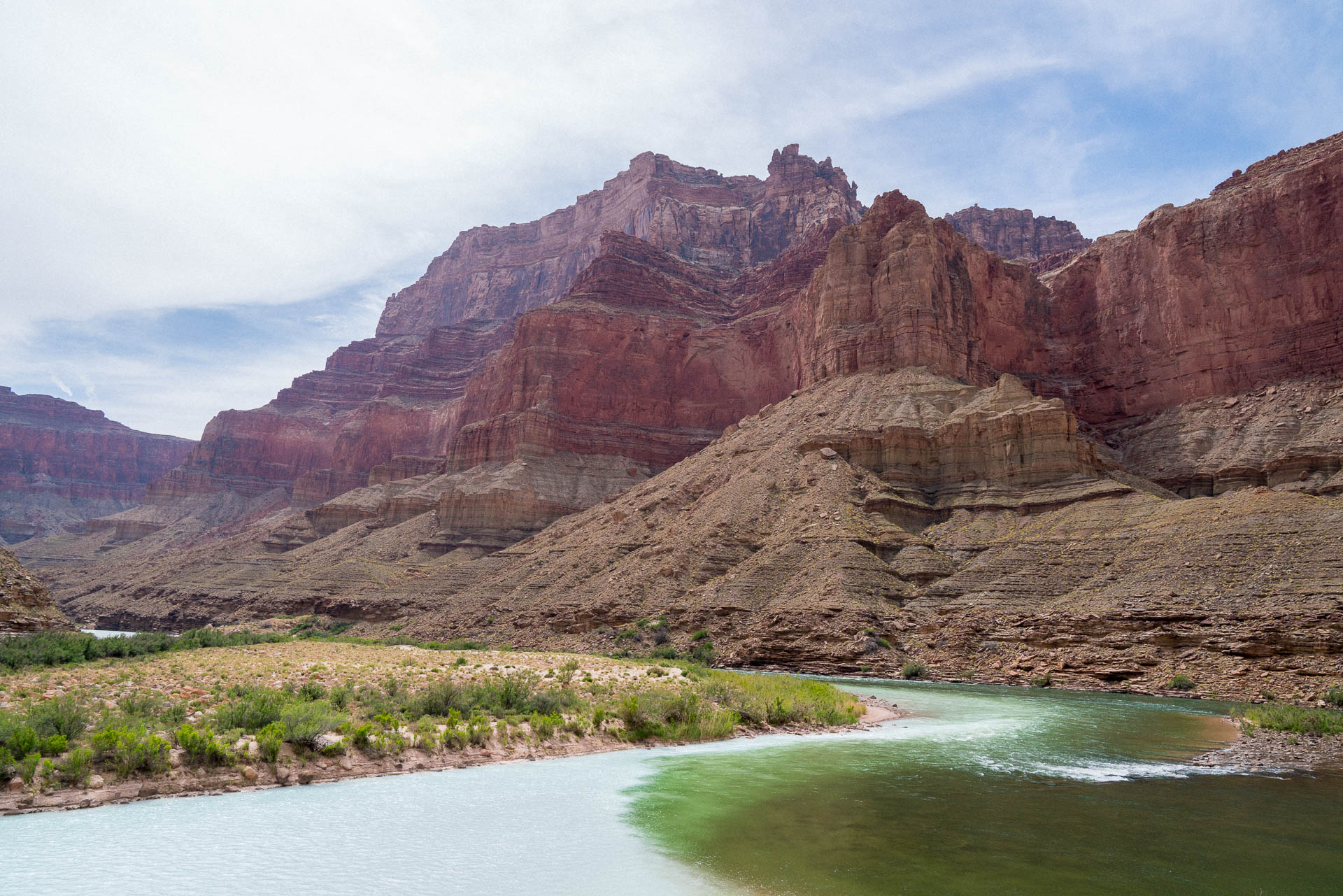 With the blessing of the river guides, we refilled our water bottles off the jugs meant for their clients. Meanwhile, the waters of the Colorado River were freezing cold and felt fantastic on tired feet. Knowing I wasn't going to be able to keep up once the running started again, I turned back before the rest of the crew. Having already shot the way down, I put the camera away for the way back. 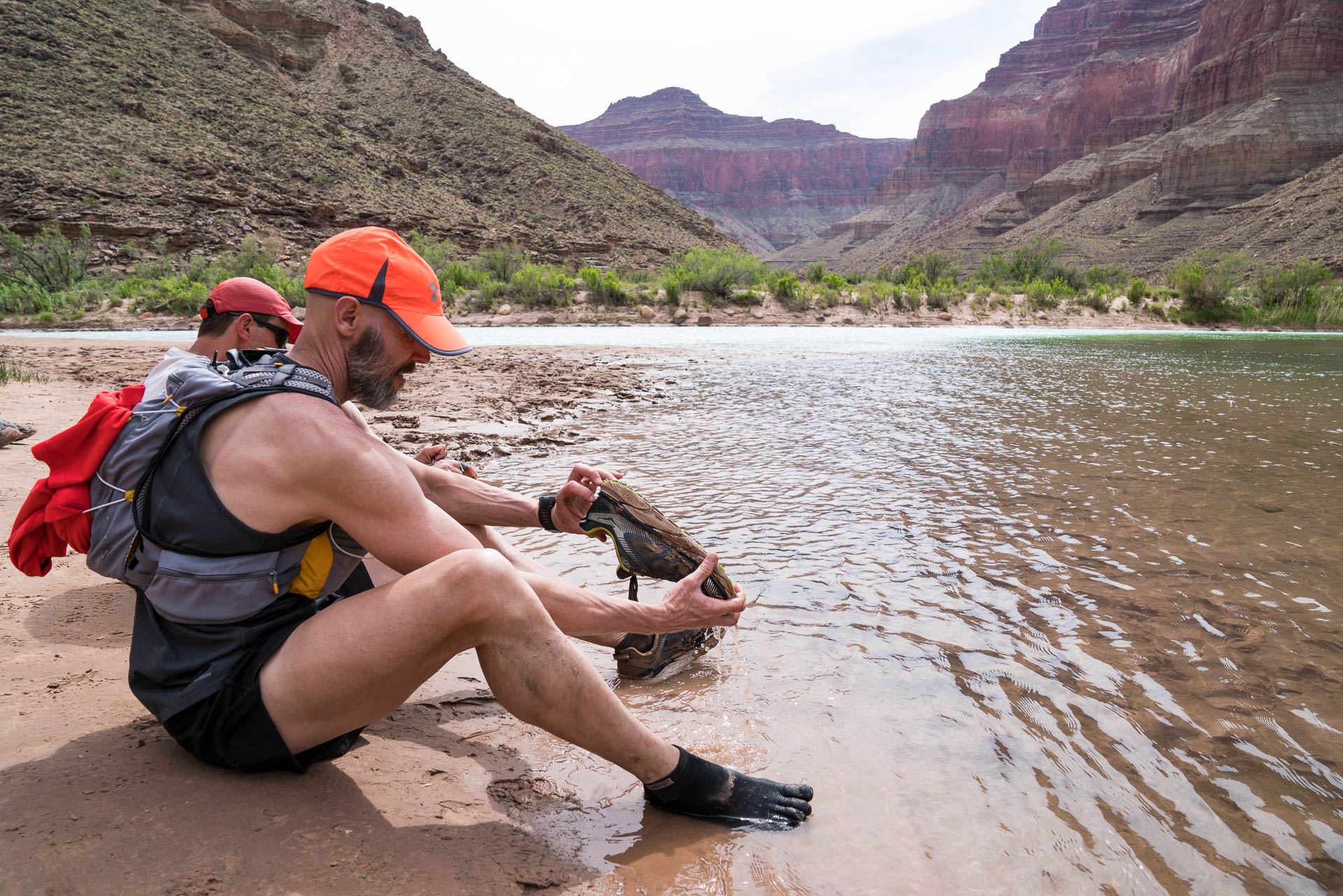 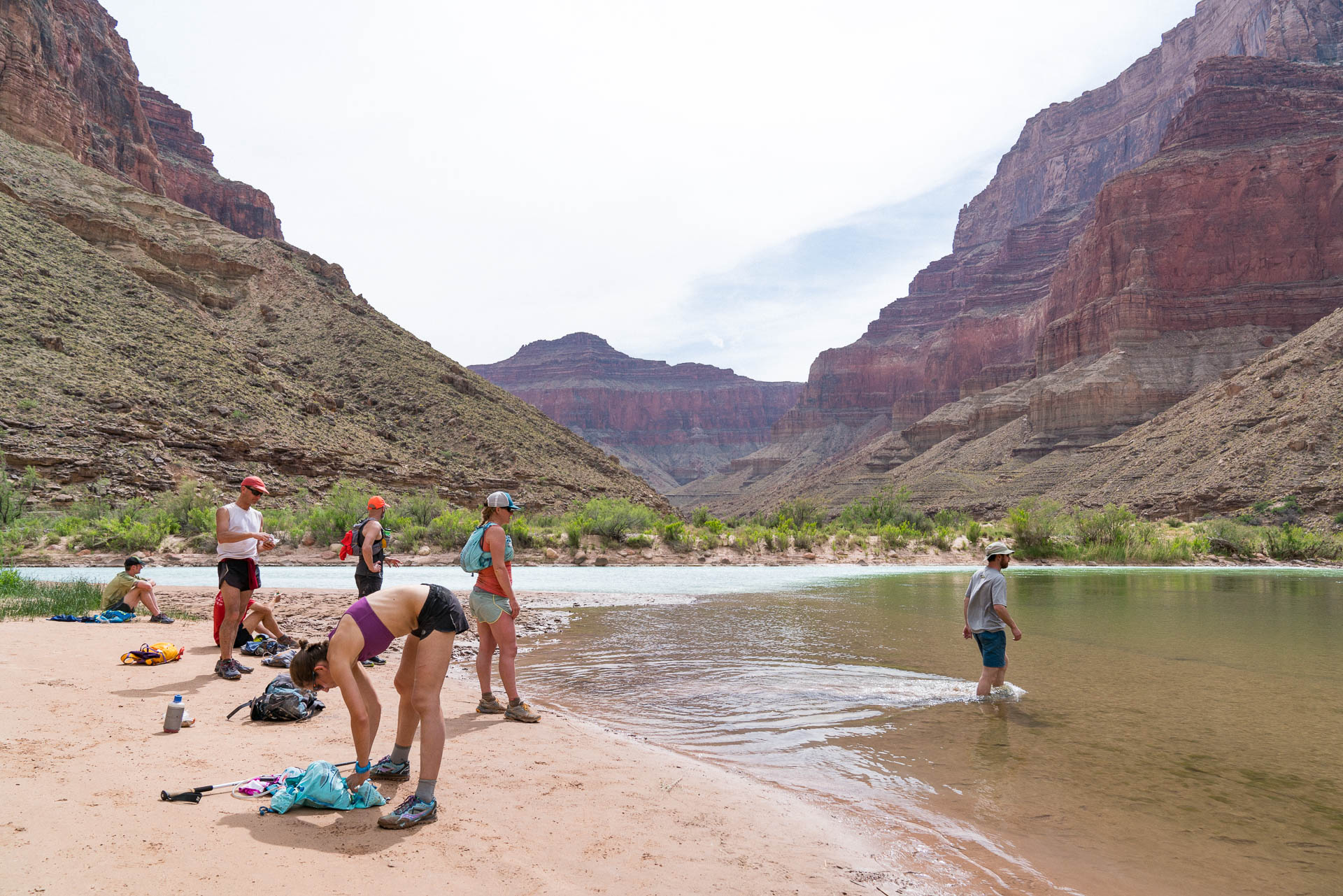 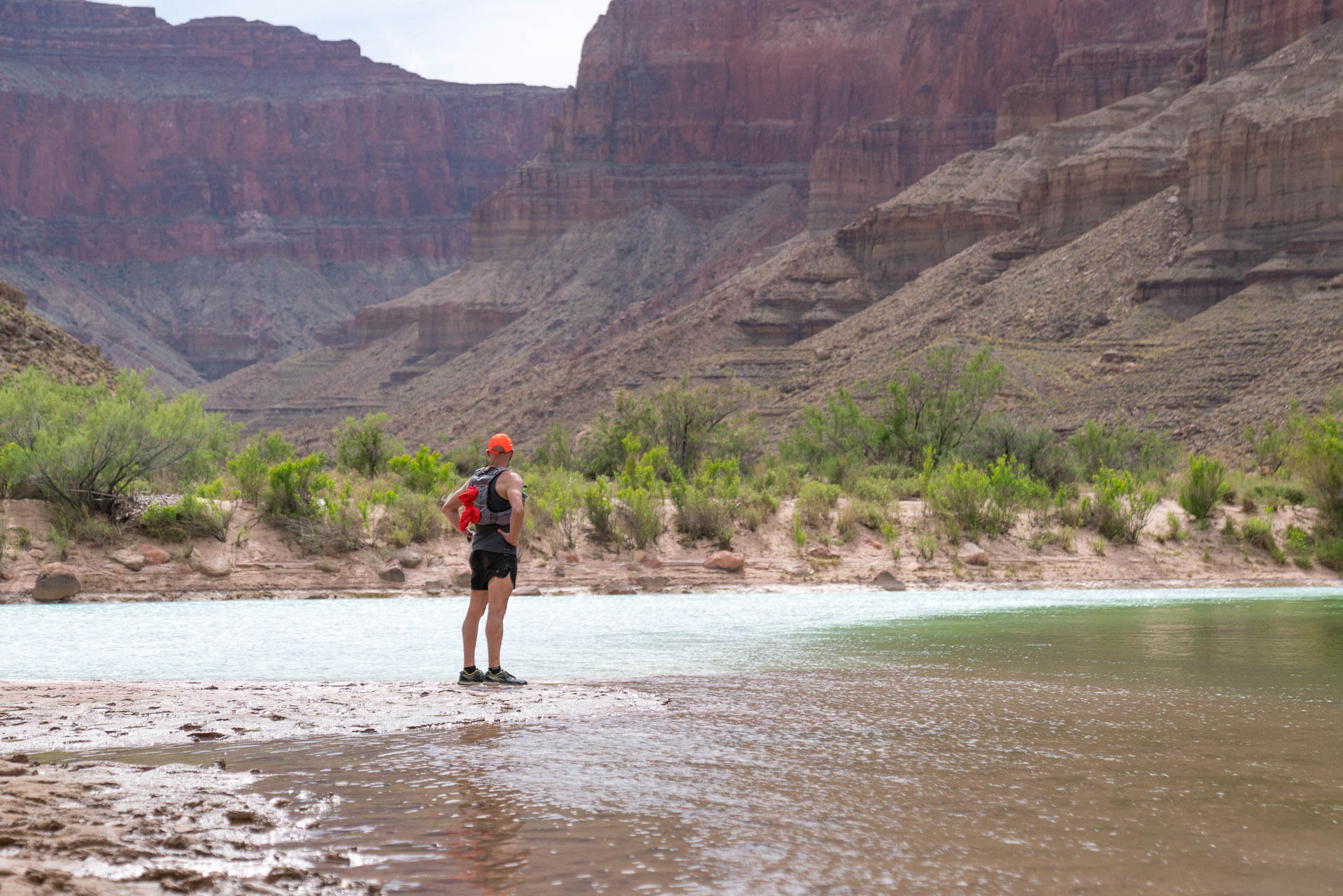 Our route to the confluence was half-again what we'd guessed. We'd put away maybe 13 miles getting there, and had 13 again to go back - and this time, the last three would be climbing back out of the depths of the Grand Canyon.

Lacking the science water (... and training) that the rest of the crew had, my calves started cramping up. On Todd's advice I altered my gait. He companionably stuck back with me as the pros got further and further ahead. I found a second wind after downing some donated electrolytes, but it was a long ways out.

We refilled waters again off a warm, salty stream a little more than halfway back out. With the reality of how far we had to go, we no longer had the luxury of stopping to rest in pools.

Time passed and I bonked; more time went by, and I had a third wind. Then later again, a fourth. 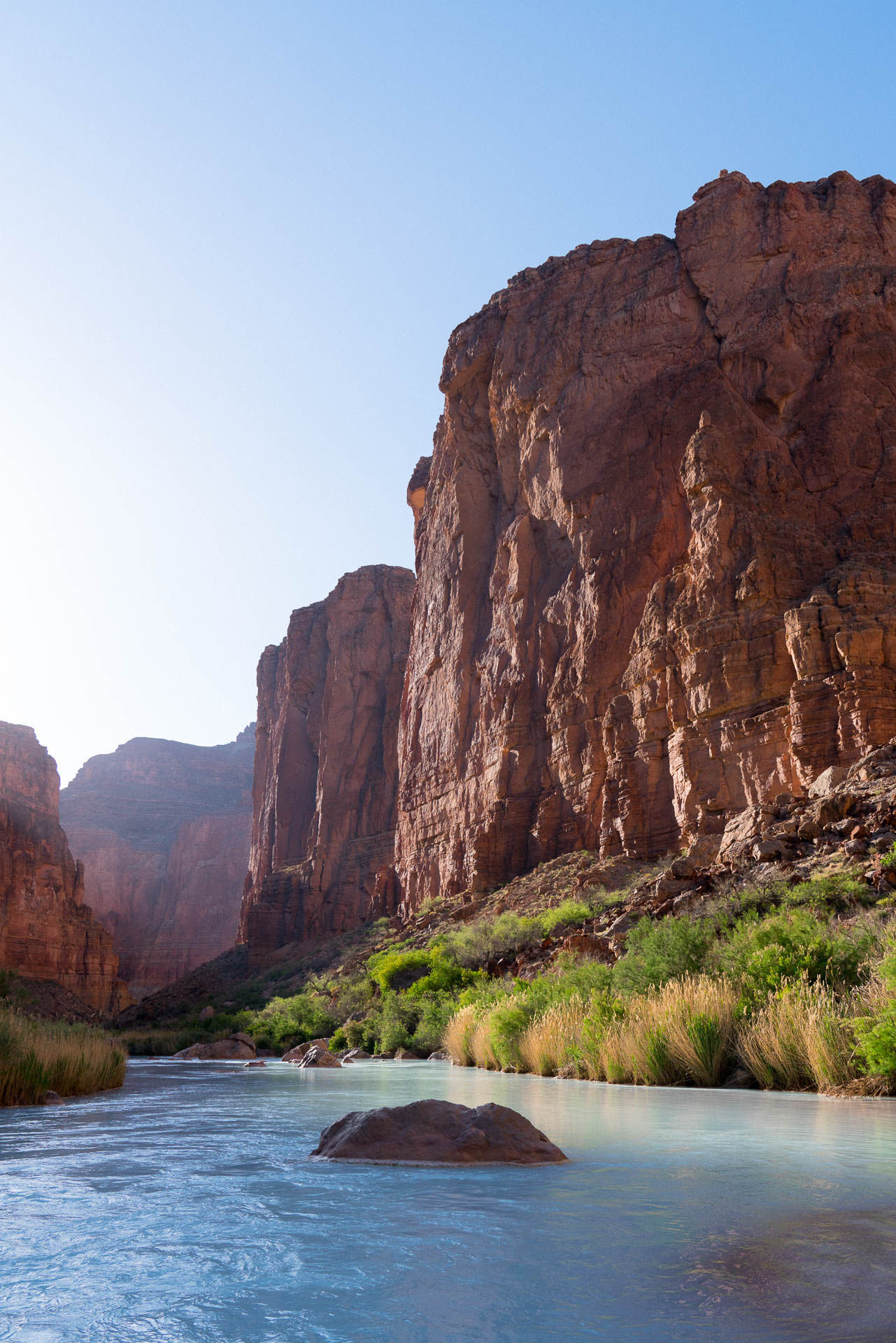 The sun stepped lower in the sky. Shortly after we turned into the Salt Trail Canyon we saw the last of its light. 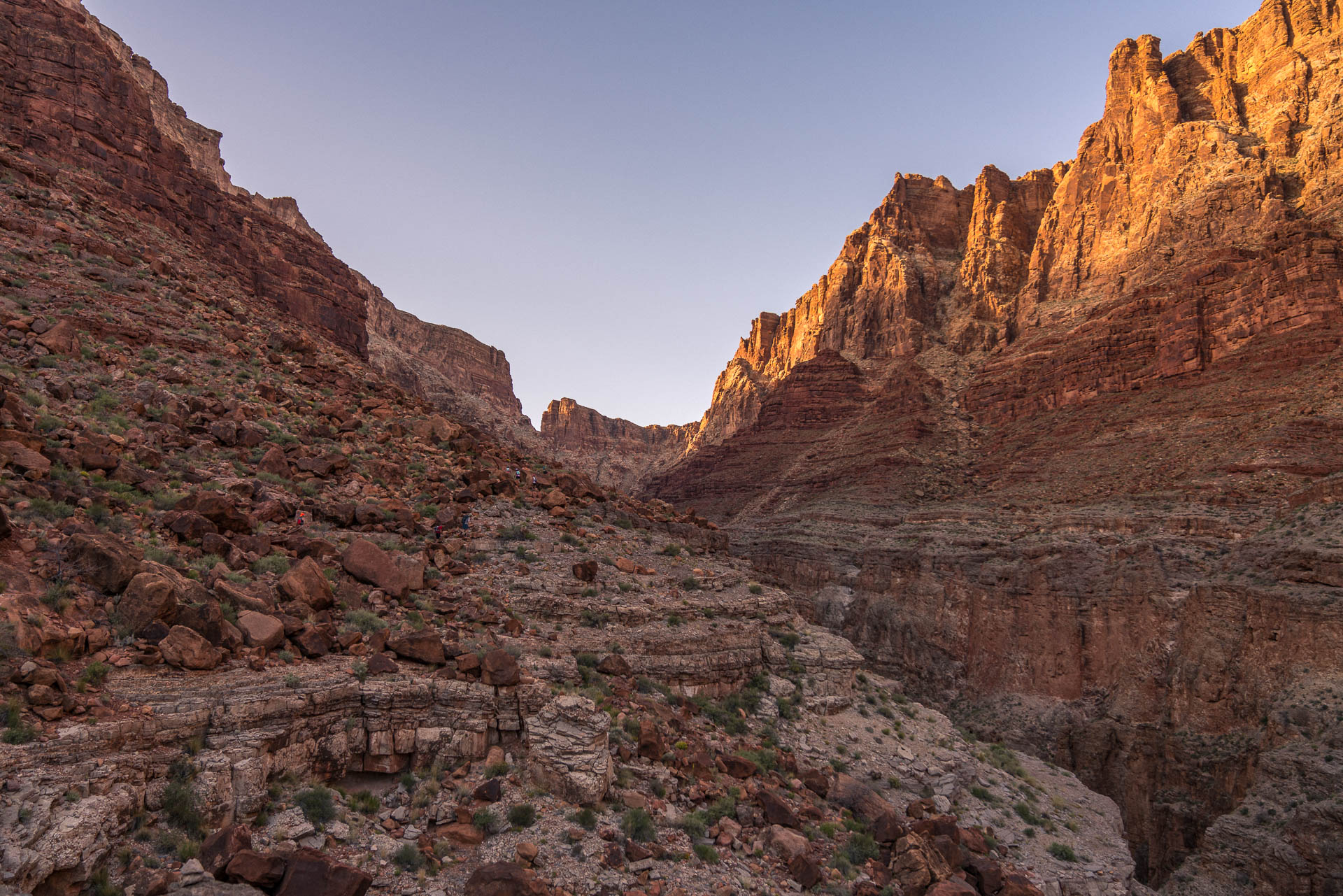 By then both of my legs had been cramping for a while, and the change in gradient was actually what saved me. Though my calves were burned, my mountain-trained quads and hammies had plenty of fire to give. On steeper sections I would catch up to some of the group. Then I'd invariably lose them when the ground flattened out again.

At the very last mile I rejoiced at the fourth class scramble to the rim, where my arms gave my legs the break they so desperately needed. I came out to the rim with the pack, rock climbing skills propelling me back to the group.

A bit more than ten hours after the start of our hike, the light beams of Todd's Jeep lead the way out from the trailhead. We crossed our fingers that we wouldn't get nearly so lost on the way out as we had on the way in.