I was all set to spend a weekend in the Greater Seattle region when Nate texted me:

Want to climb The Grand Wall on Sunday? I'm a bachelor for the weekend.

The Grand Wall attacked straight up Squamish's greatest cliff, The Chief, reaching Bellygood Ledge in nine pitches at 11a. 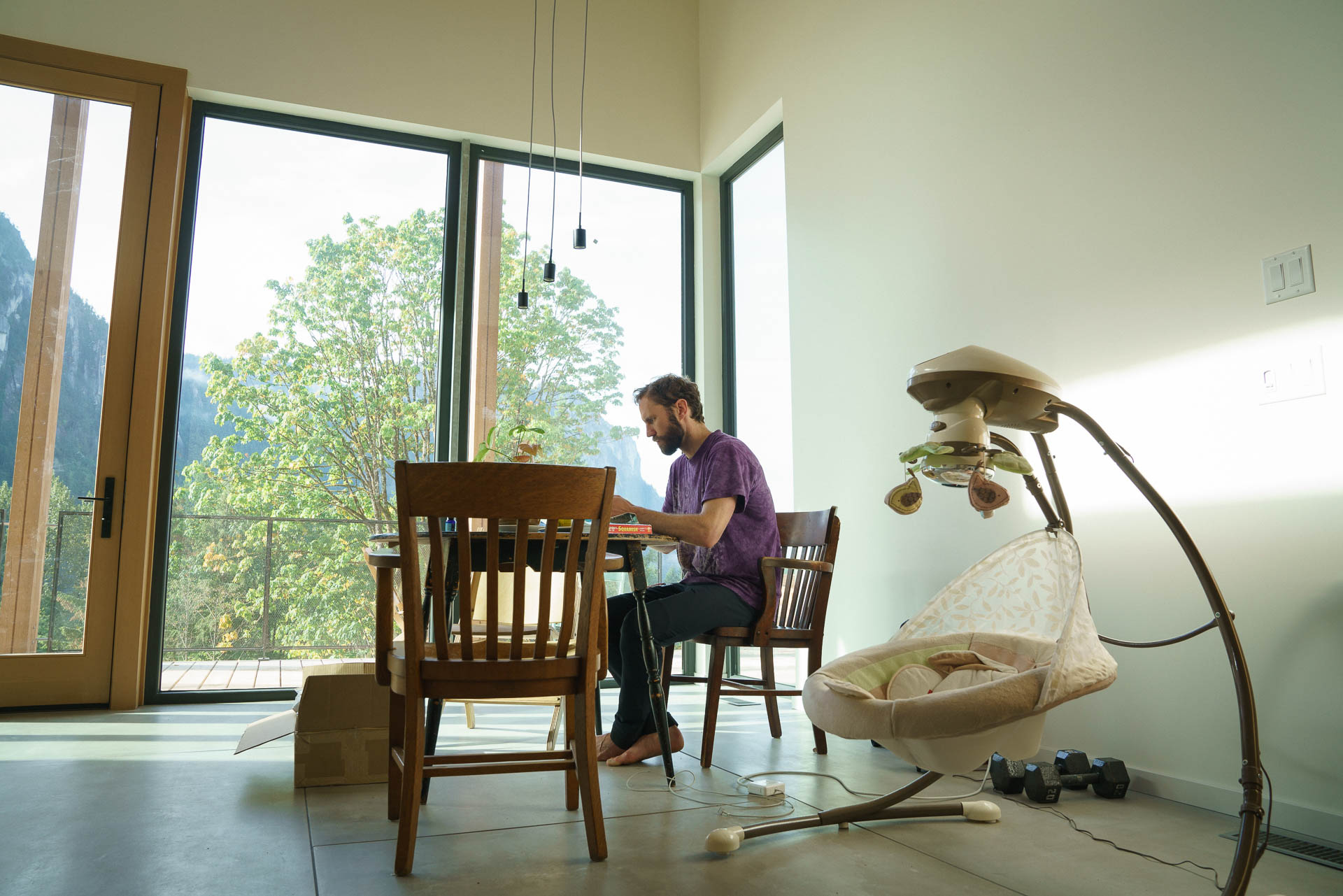 The weather, after weeks of rain, fortuitously turned our way and Nate and I got started at 2 in the afternoon. Eleven days later I did the route a second time - because it's that good - with Megan. When Nate and I went, he took the even pitches and I took the odd. Megan and I flipped that, meaning I got to lead every pitch of the route.

Also meaning I almost have photos of every pitch, because how could I not lug glass up a route like this?

We did the route via its Apron Strings start. Apparently you can skip these two pitches of great thin 5.10 and start the route with the 5.7 slab of Mercy Me, but I can't imagine why you'd want to!

Apron Strings is a solid 5.10 slabby smeary layback fingercrack with a thin crux three-quarters of the way up that eases into easy fifth class and a belay tucked behind some trees.

Unbeknownst to me, Phil Binnema watched me lead this pitch with Nate. He didn't realize it until we were three pitches in and heard Nate yelling "Enlow! Off belay!" Likewise, Cydney and Adam, my two other Squam pals, overheard Nate and I going back and forth on The Grand Wall.

Everyone was there for my introduction to Canadian climbing!

The second pitch is a quick and awkward thin crack in a corner followed by miles of zig-zagging wide hands for low angled good times. It finishes on the giant ledge that marks the beginning of Mercy Me. 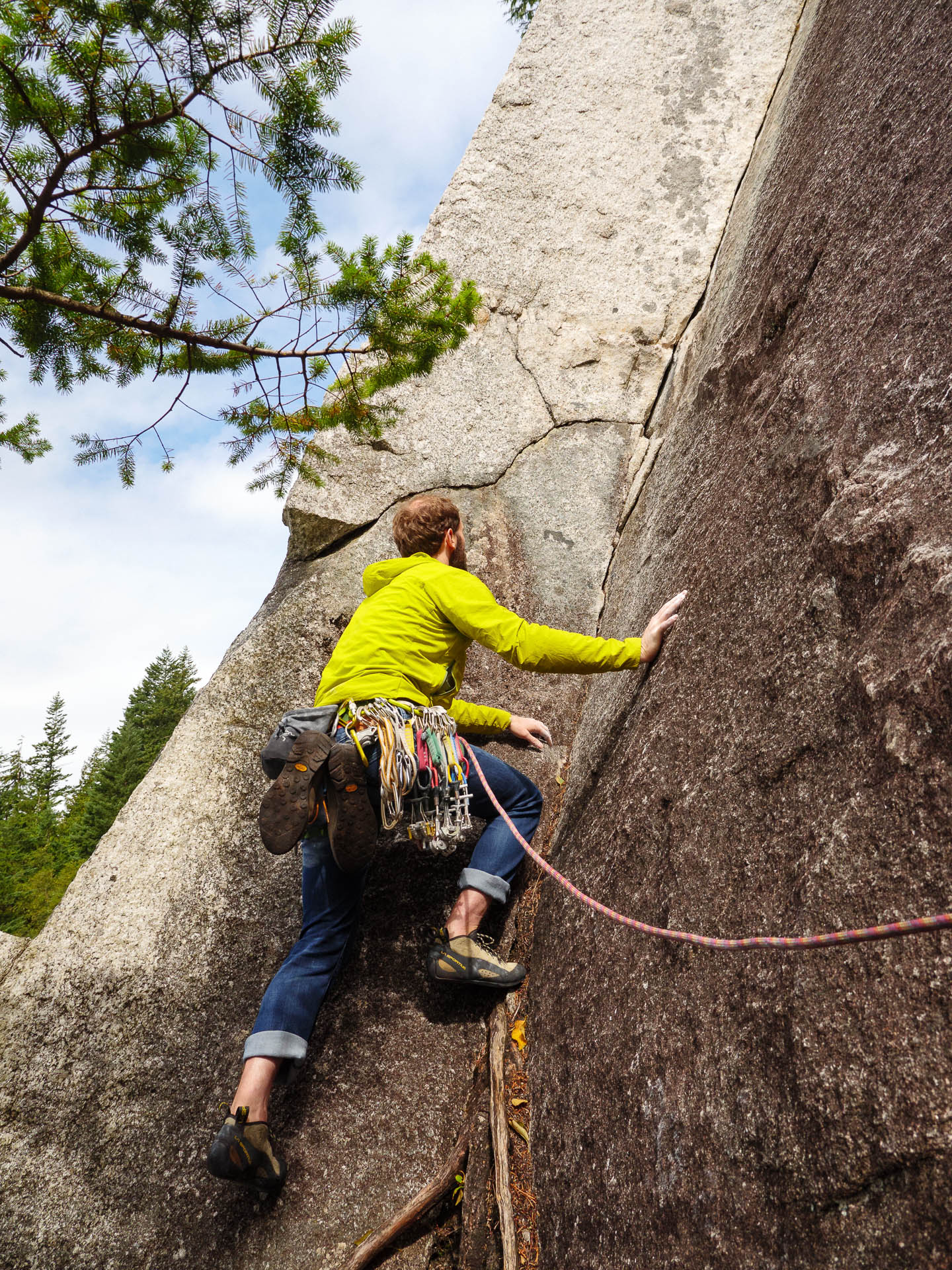 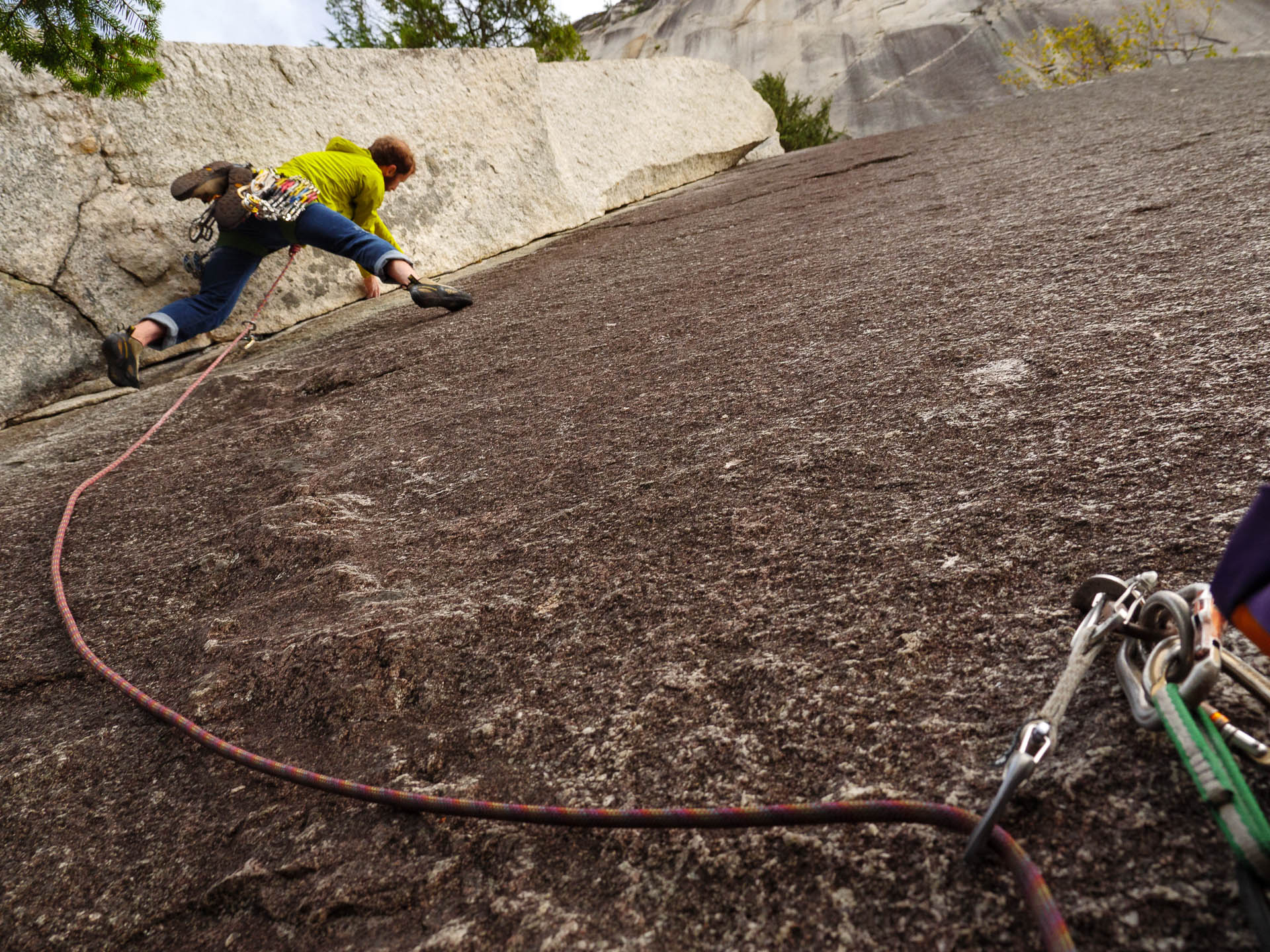 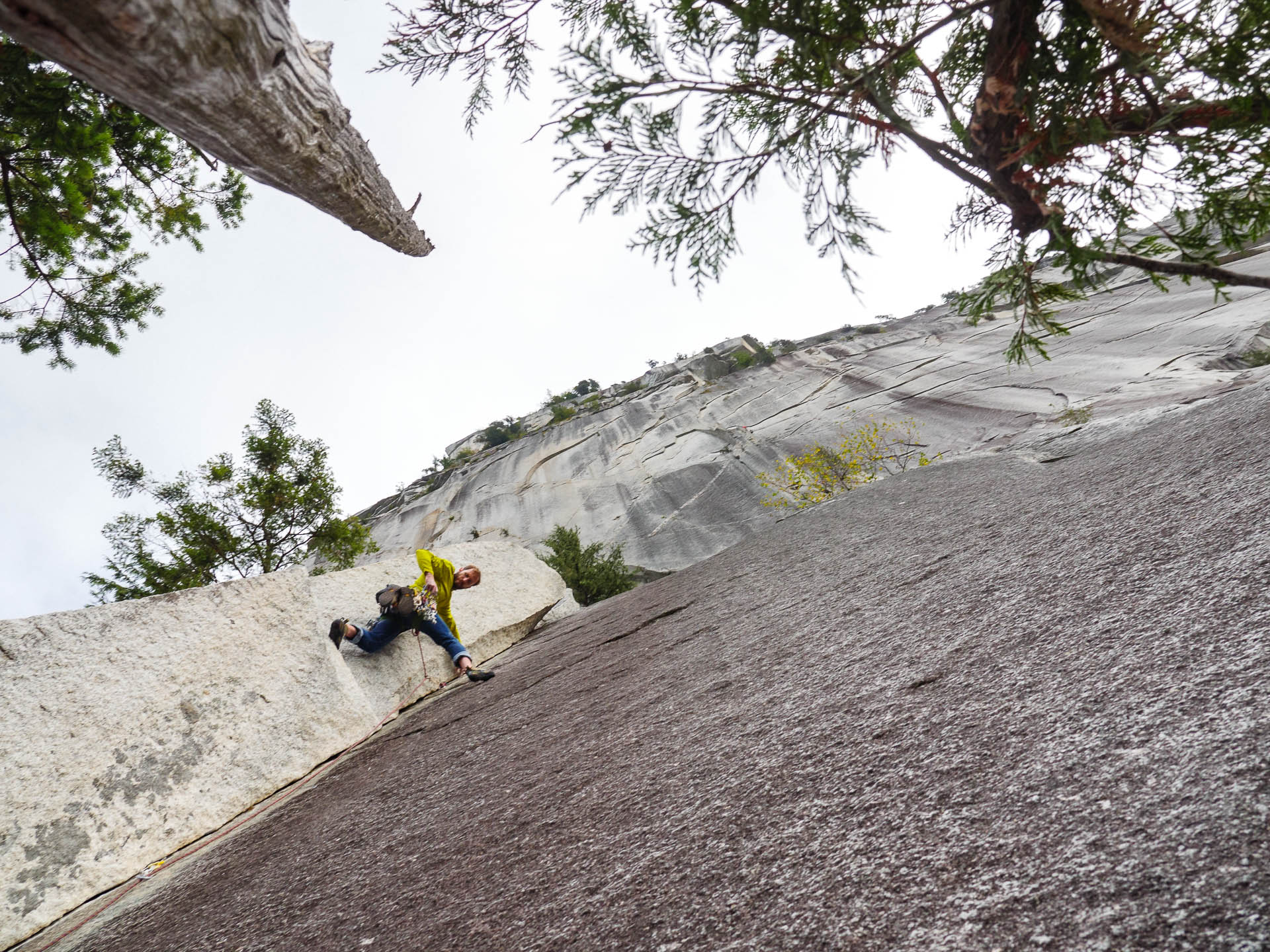 Nate nearly through the harder parts 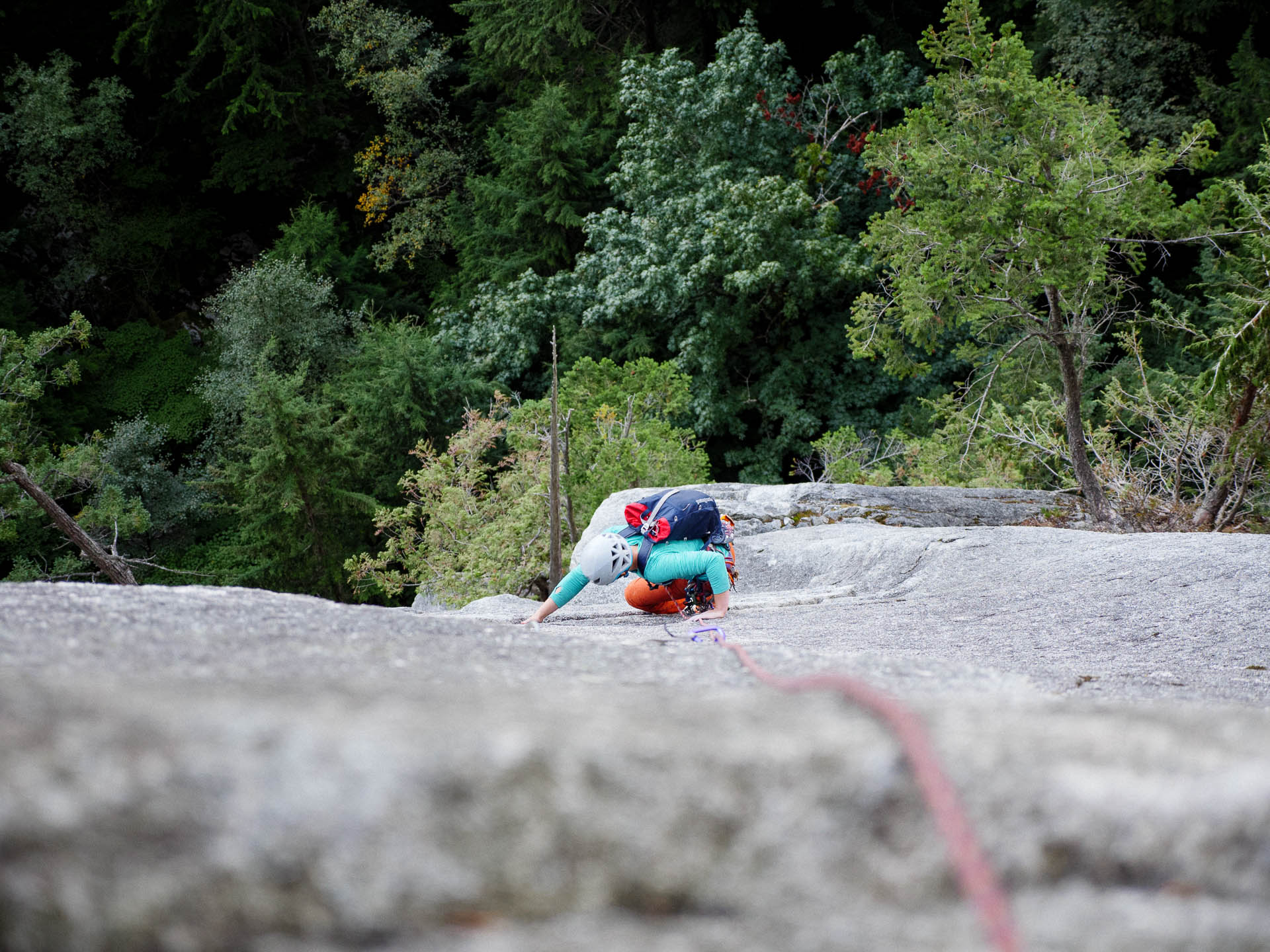 Megan finishing the pitch on its wide bits

Mercy Me is a giant expanse of low angled black slab. While there are anchors enough to do two pitches through it, Nate taught me that doing it in a single pitch was the path of true enlightenment. 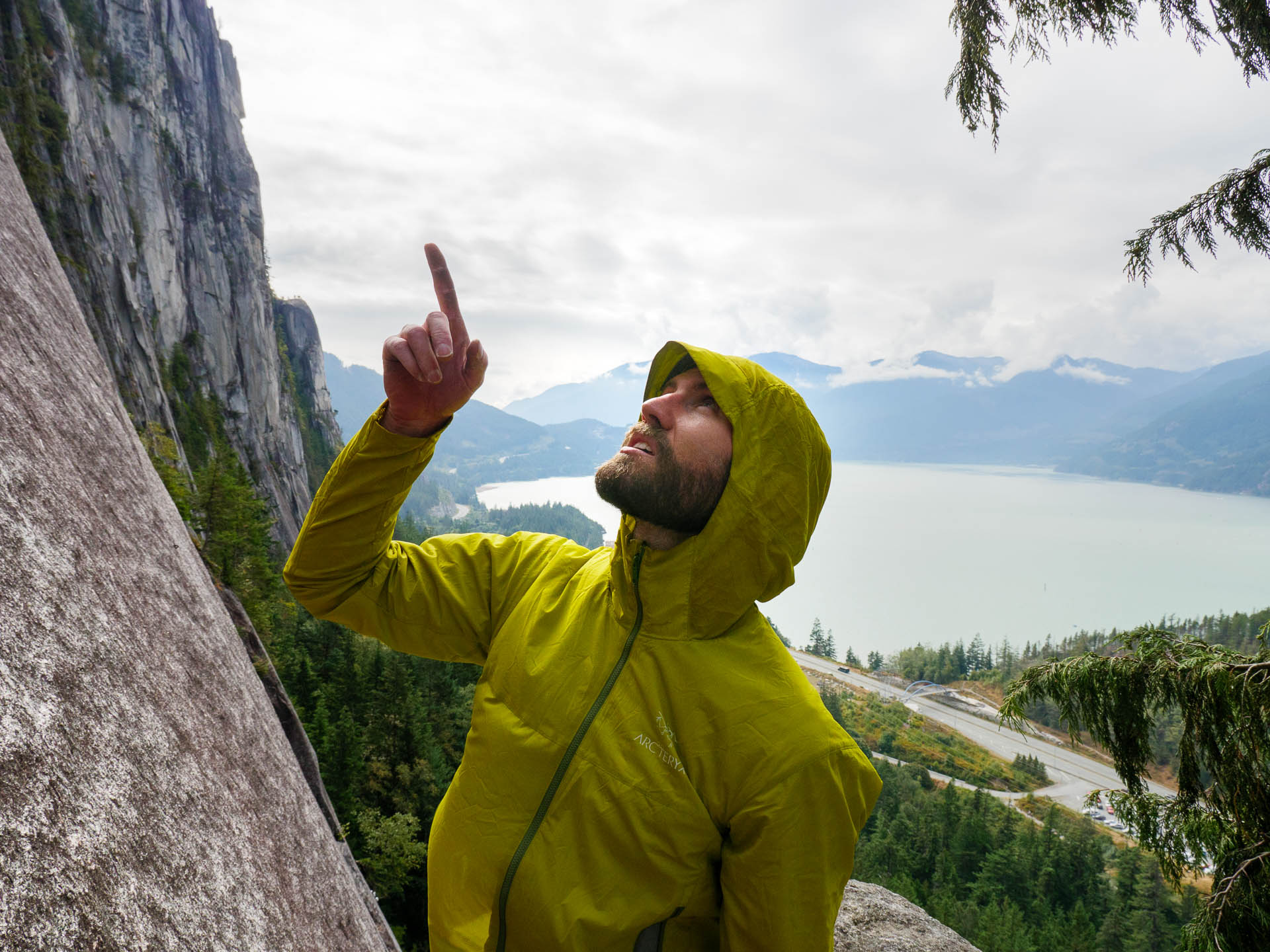 Nate pointing out the path I'd be taking over the slab

I was ten feet up the rock before I realized that I could not see a protection bolt anywhere. I paused, looked around, and looked down at Nate. "Nate? Why are there no bolts?"

"Have fun Enlow!" he laughed in reply.

Ten and five feet further I finally spied a bolt two more body lengths above me. "I see a bolt!" I shouted. As I was turning my head to direct this exclamation at my belayer I noticed that there was also a bolt at my hip that I'd been just about to skip. 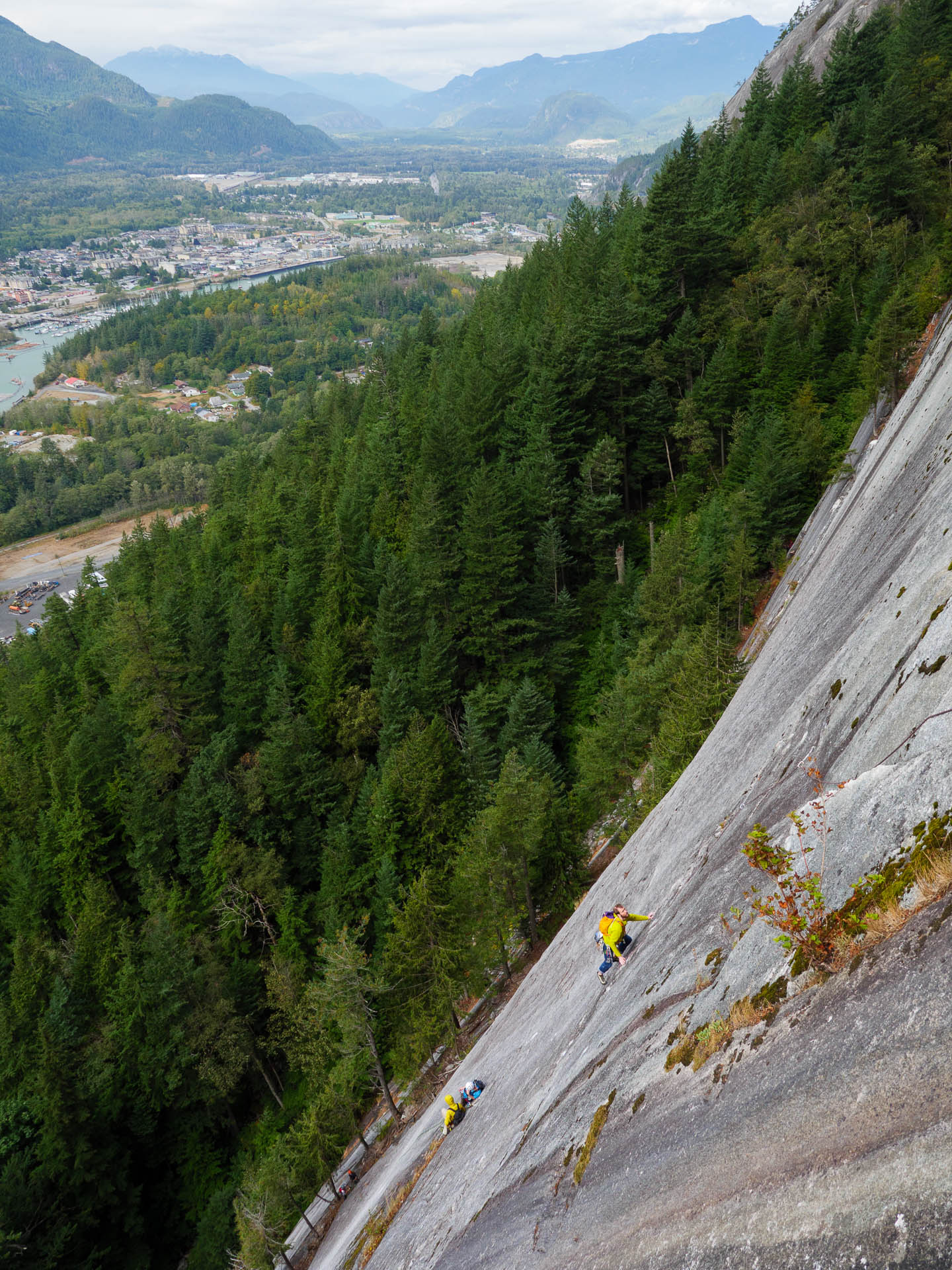 No longer entirely freesoloing, the pitch was a blast. Easy climbing with twenty feet between bolts, mmm mmm, finger-lickin' good. After gently trending left for a good ways the line cuts to the right, grabbing for a big flake where I stuffed a #3 cam. 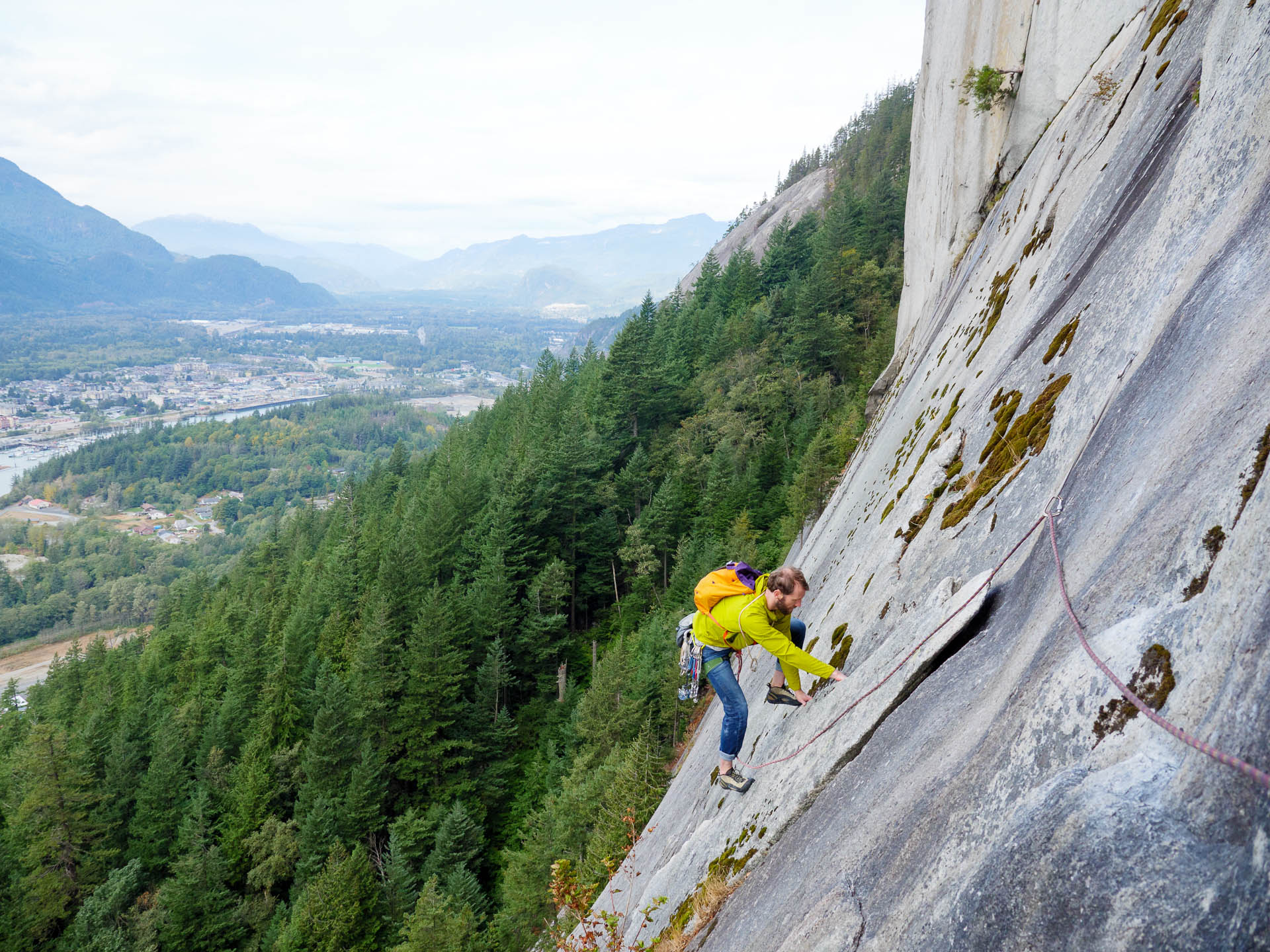 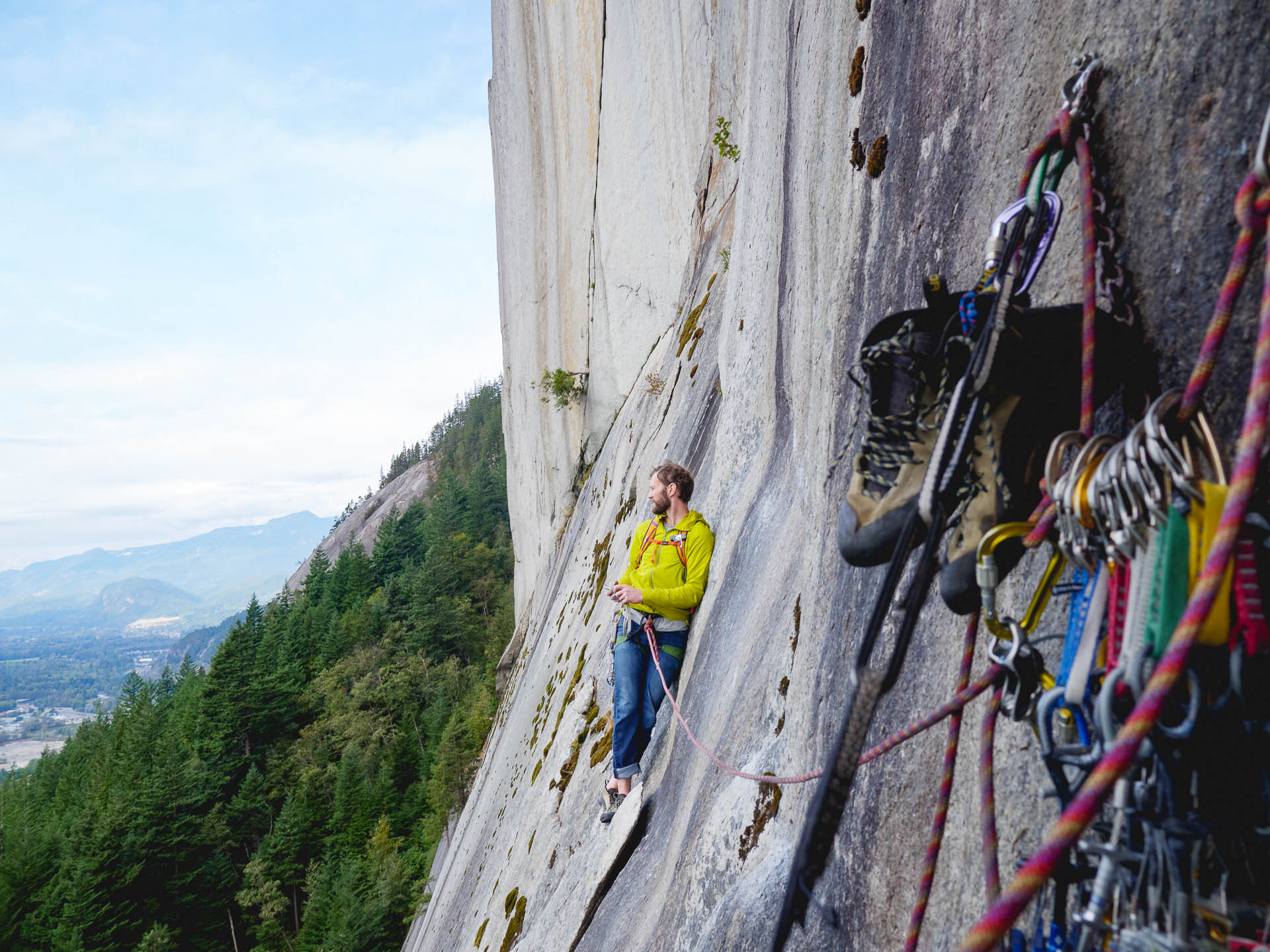 Nate atop the flake, taking in the view before the step across 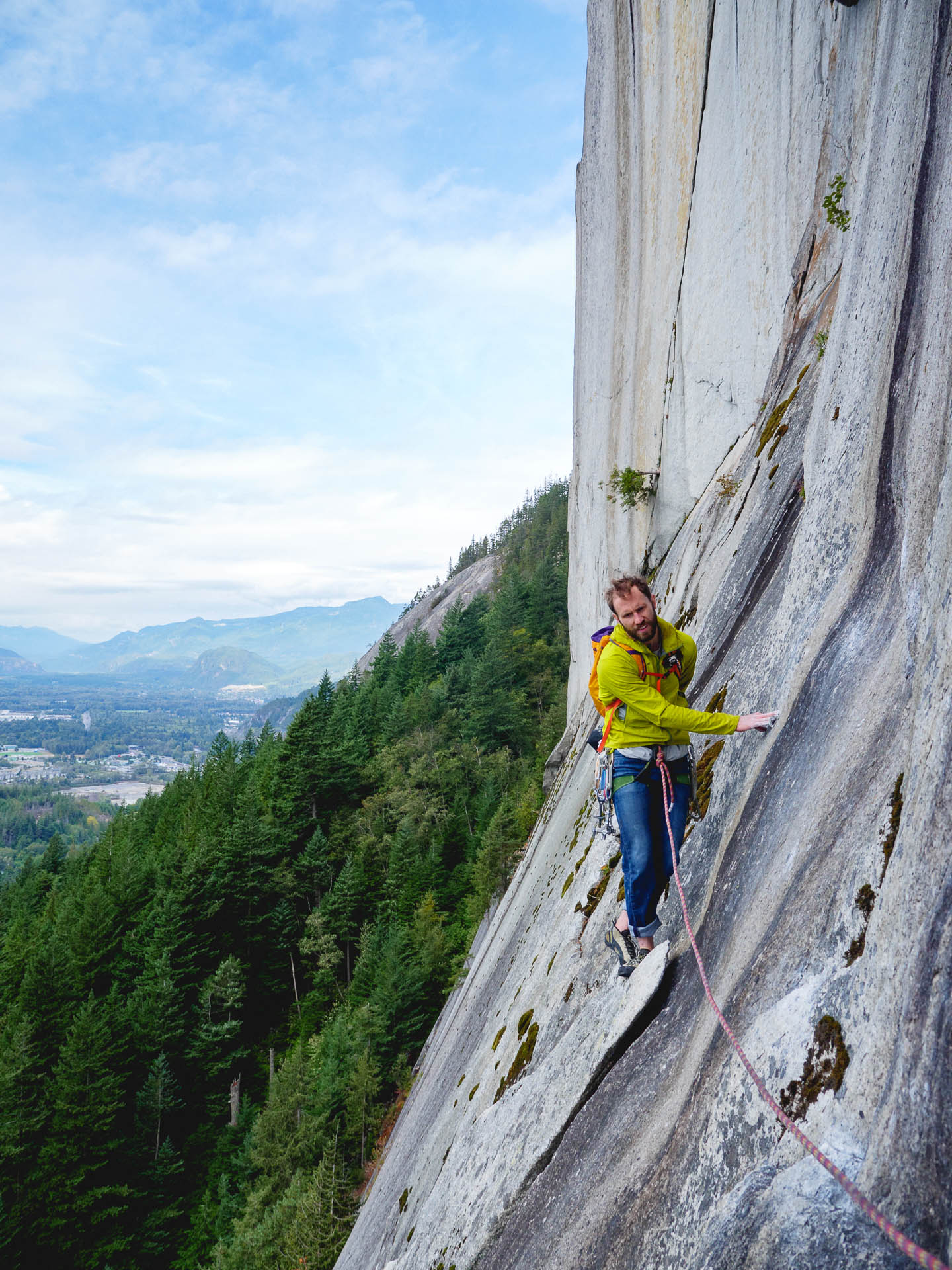 A committing step, navigating wet holds and feet, brought me to the anchors.

Split Pillar is an Indian Creek splitter up in the sky. It's probably the most photographed pitch of the entire climb, so it's funny that I don't have any photos of it.

The approach to the split pillar leads down and right from the station at the end of Mercy Me. It begins with gentle downsteps where it would be easy to forget to place pieces to protect the follower, but after ten meters the feet drop away as you gain some of the first true exposure on the route and begin to campus up and right. 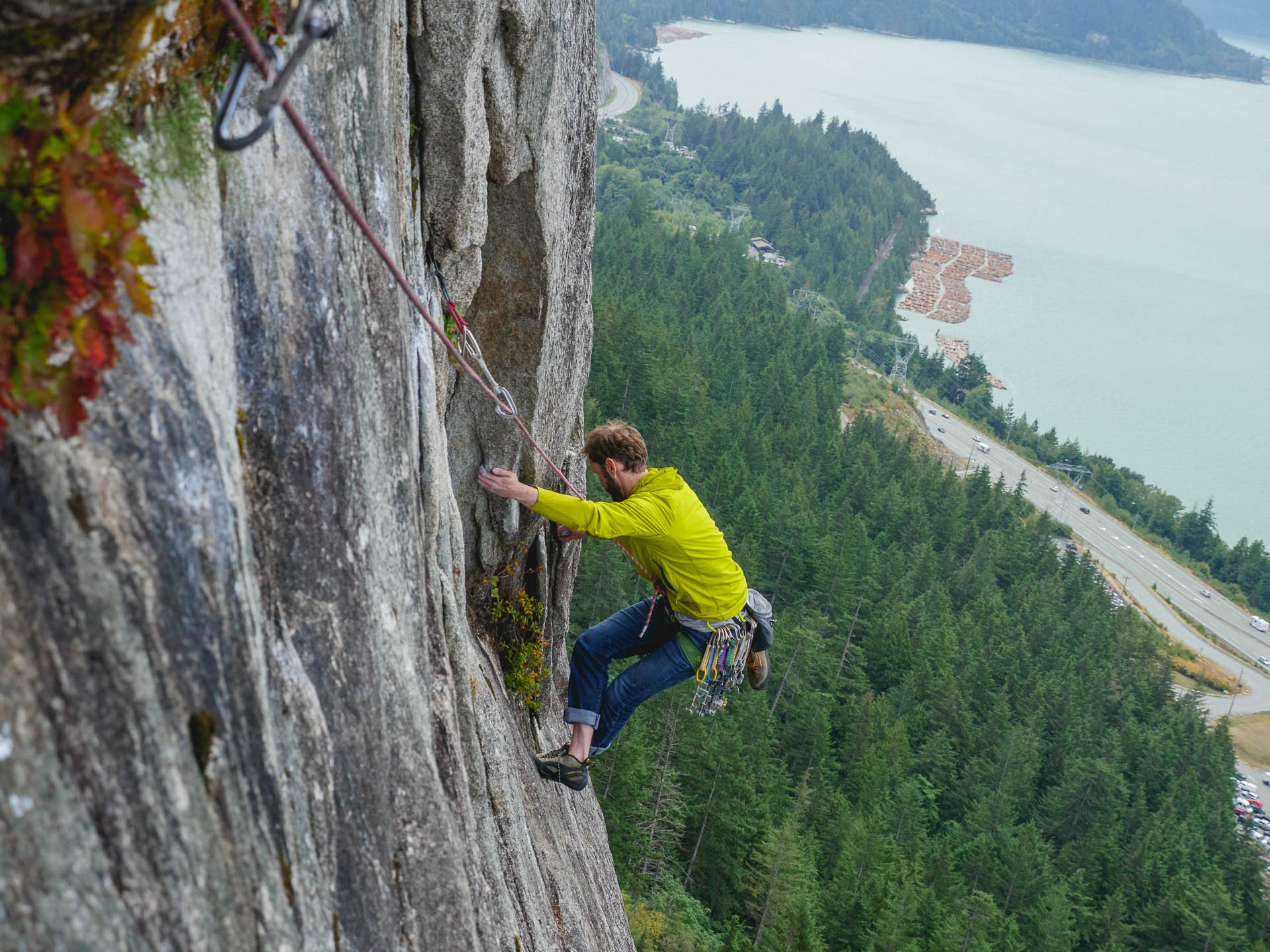 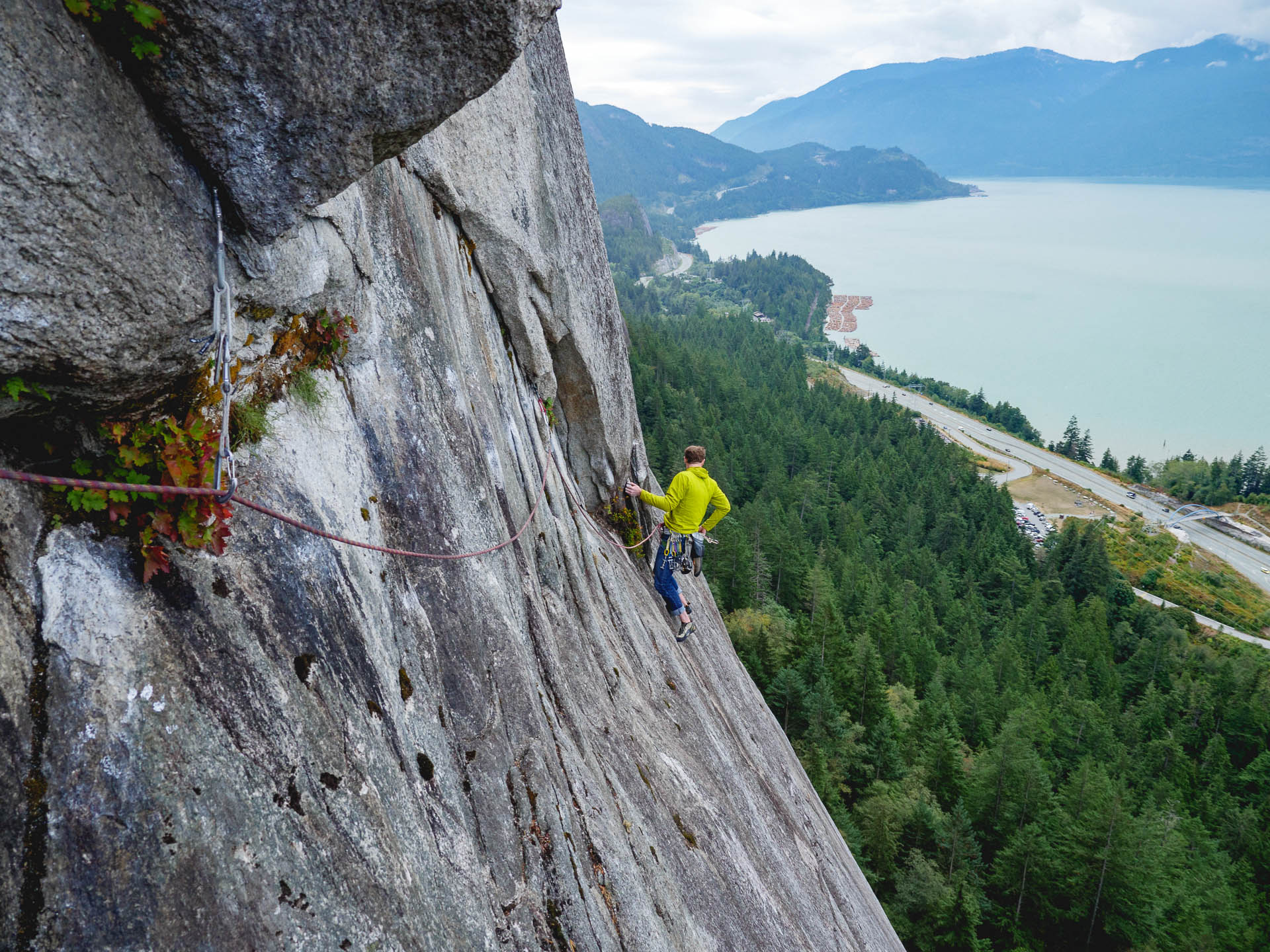 Eventually the feet run out almost entirely - and you clip your way up a bolt ladder. Protip: extend alpine slings off the bolts to use as stirrups. 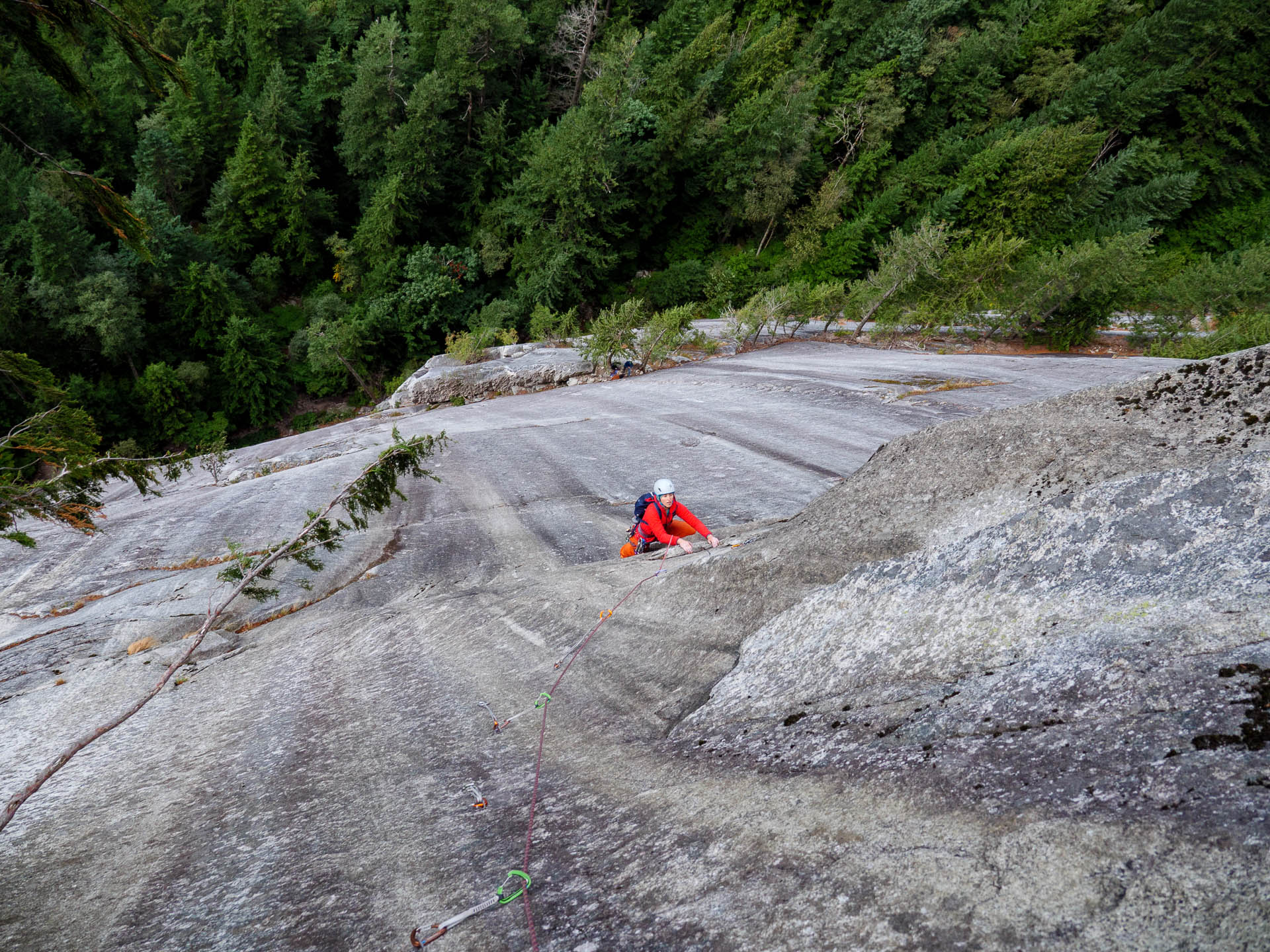 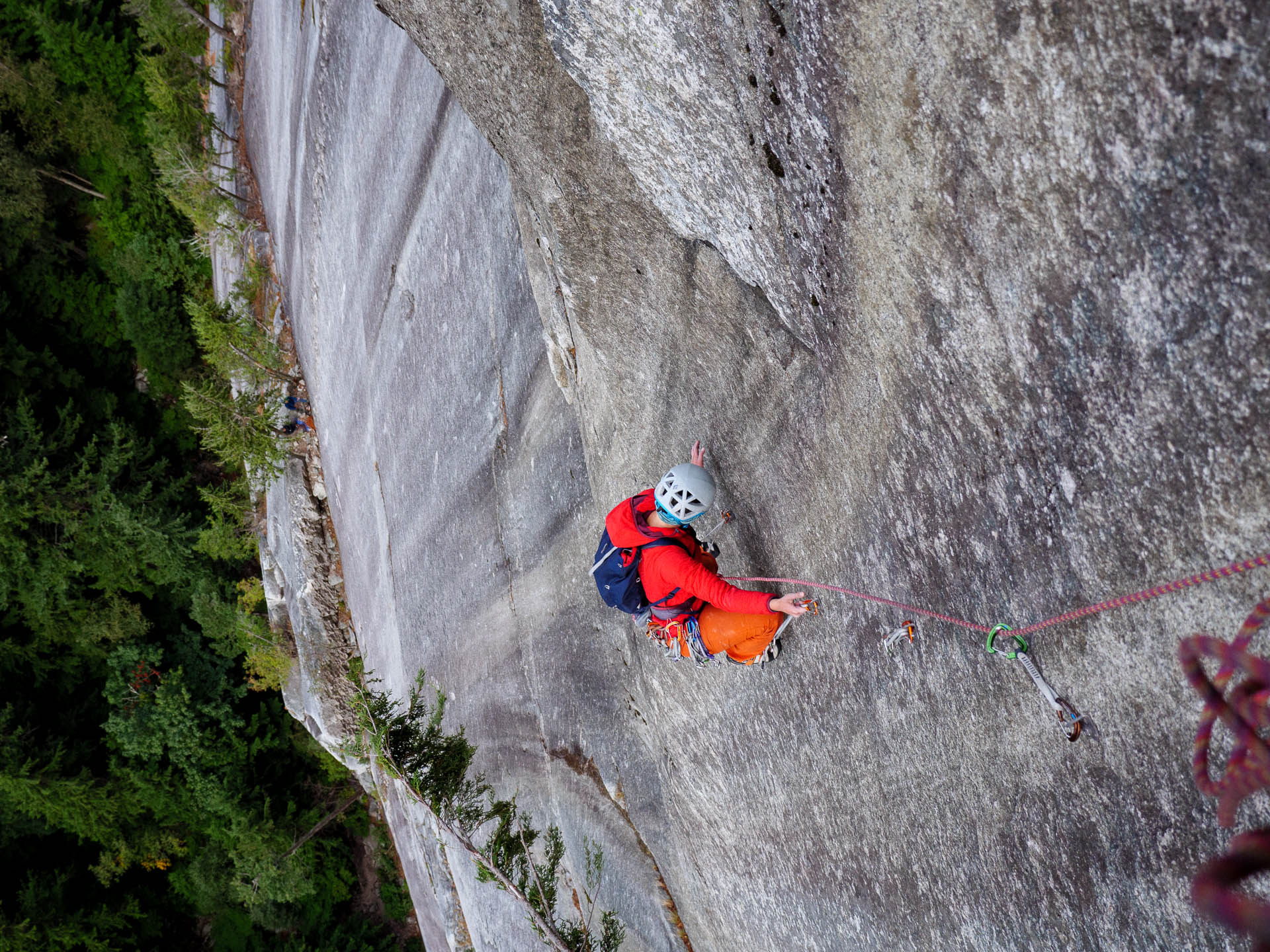 Perfect Creek corner crack. .5, .75, then hands with a #3s crux. Your choice of squeeze chimney or radical exposure layback at the end. In other words, $$money$$. 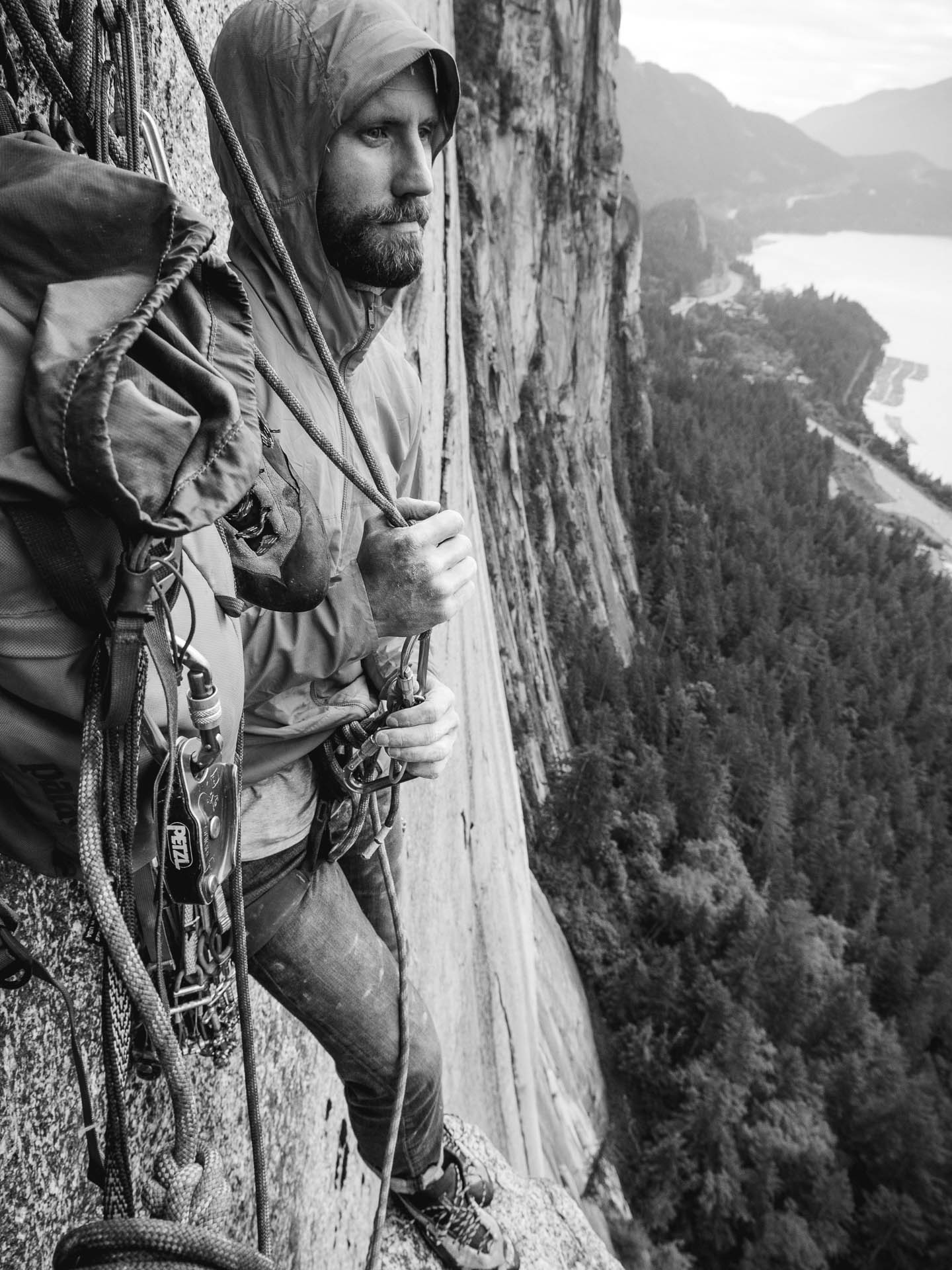 Comfortable atop P5, waiting on the party ahead as the sun dips behind some clouds

The greatest pitch on the route, I think. It's hard, it's weird, and it's damned fun. 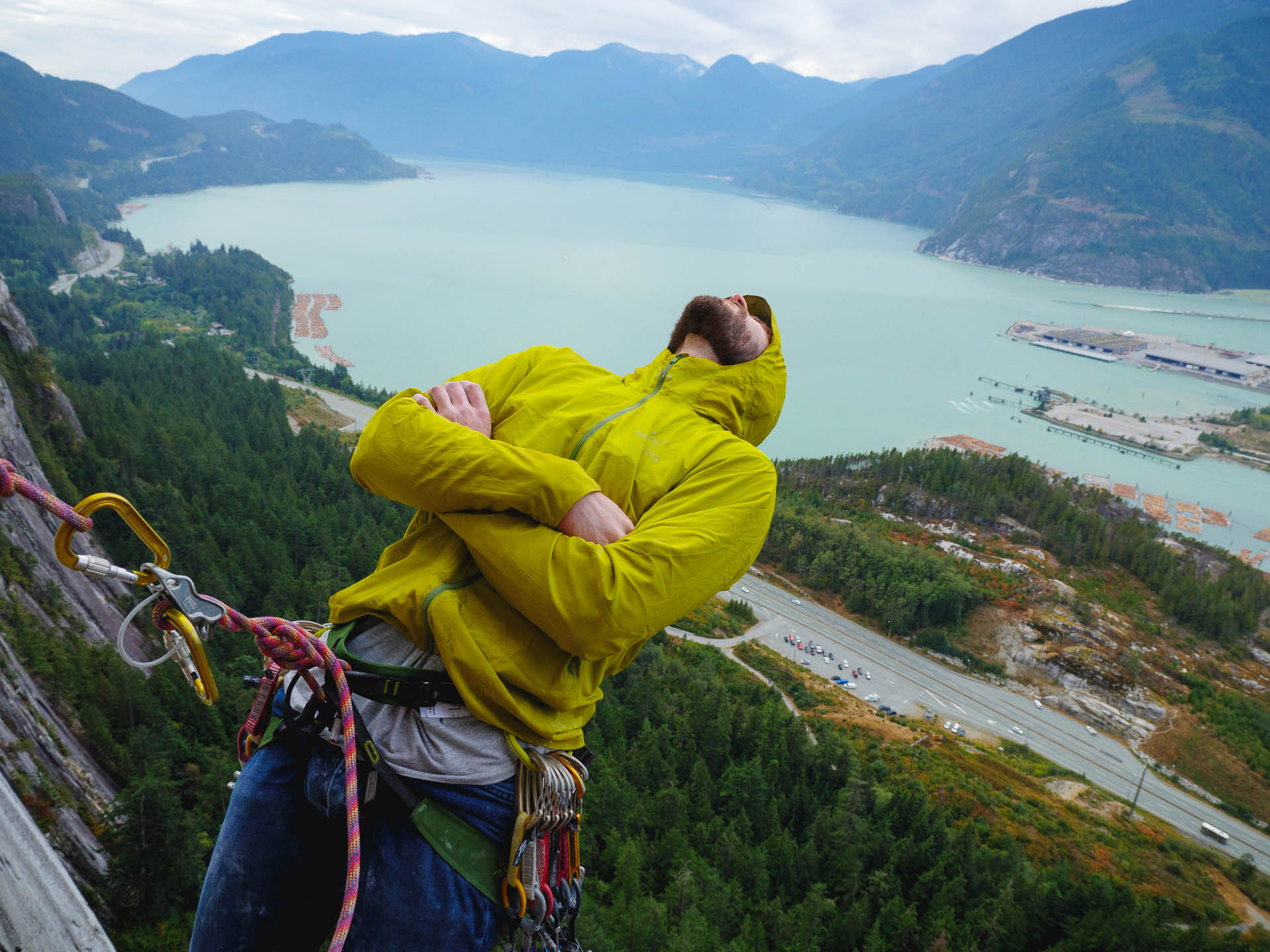 Nate looks up from below The Sword

From the comfortable ledge at the top of the Split Pillar ledge you start up, yes, yet another fingercrack corner. It narrows down to .3s before you have to reach as damned hard as you can past a bulge, thrutching around on the onsight trying to find something, anything to pull on. Knowing where it is helps for the second go. 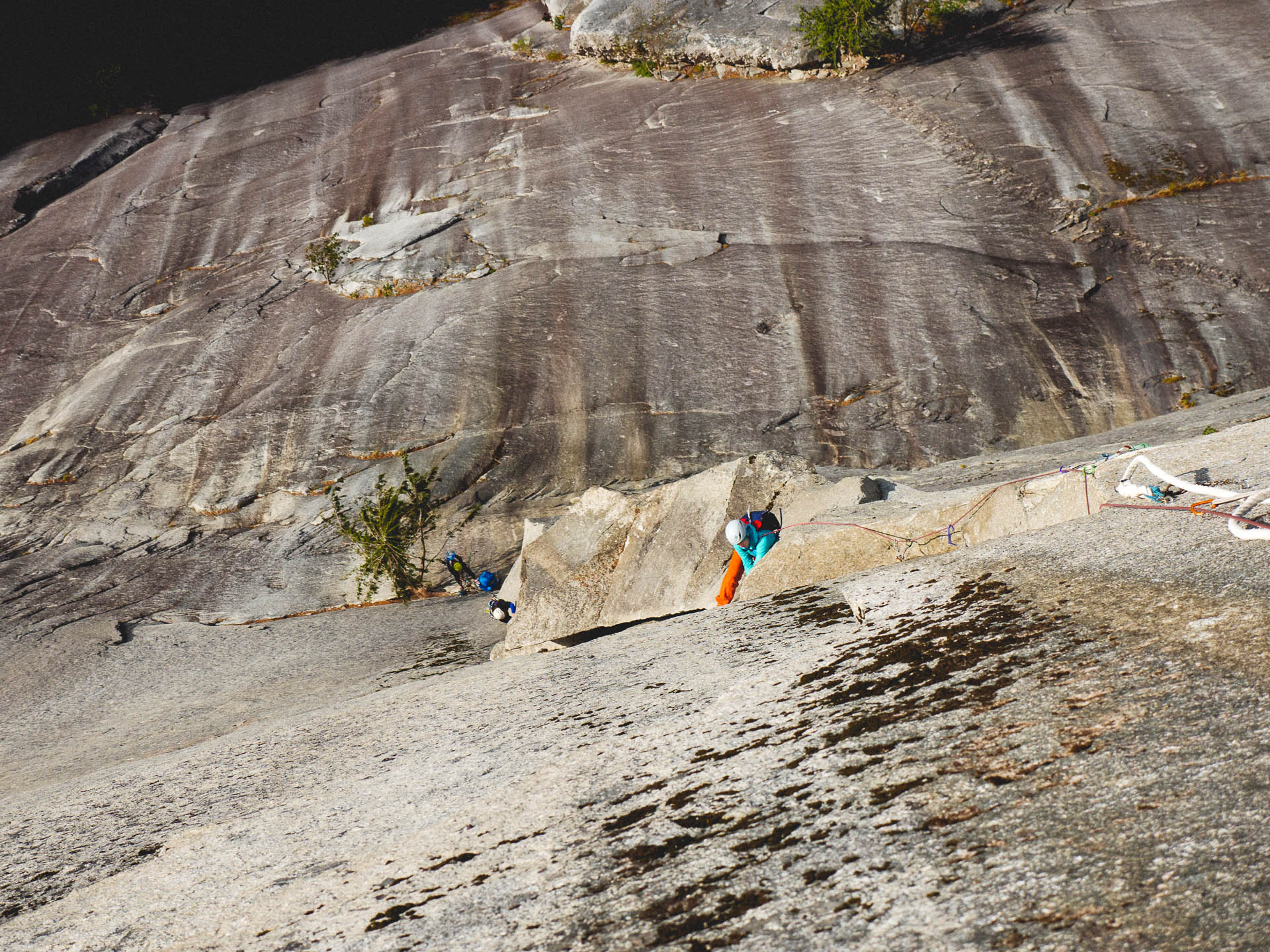 Megan moments before reaching through the crux

From there, radical dancing between finger corner on the right and broken laybacks and jugs on the face to the left with occasional feet to rest on. One final bit of committing to .5 and .4 finger laybacks up to a roof. 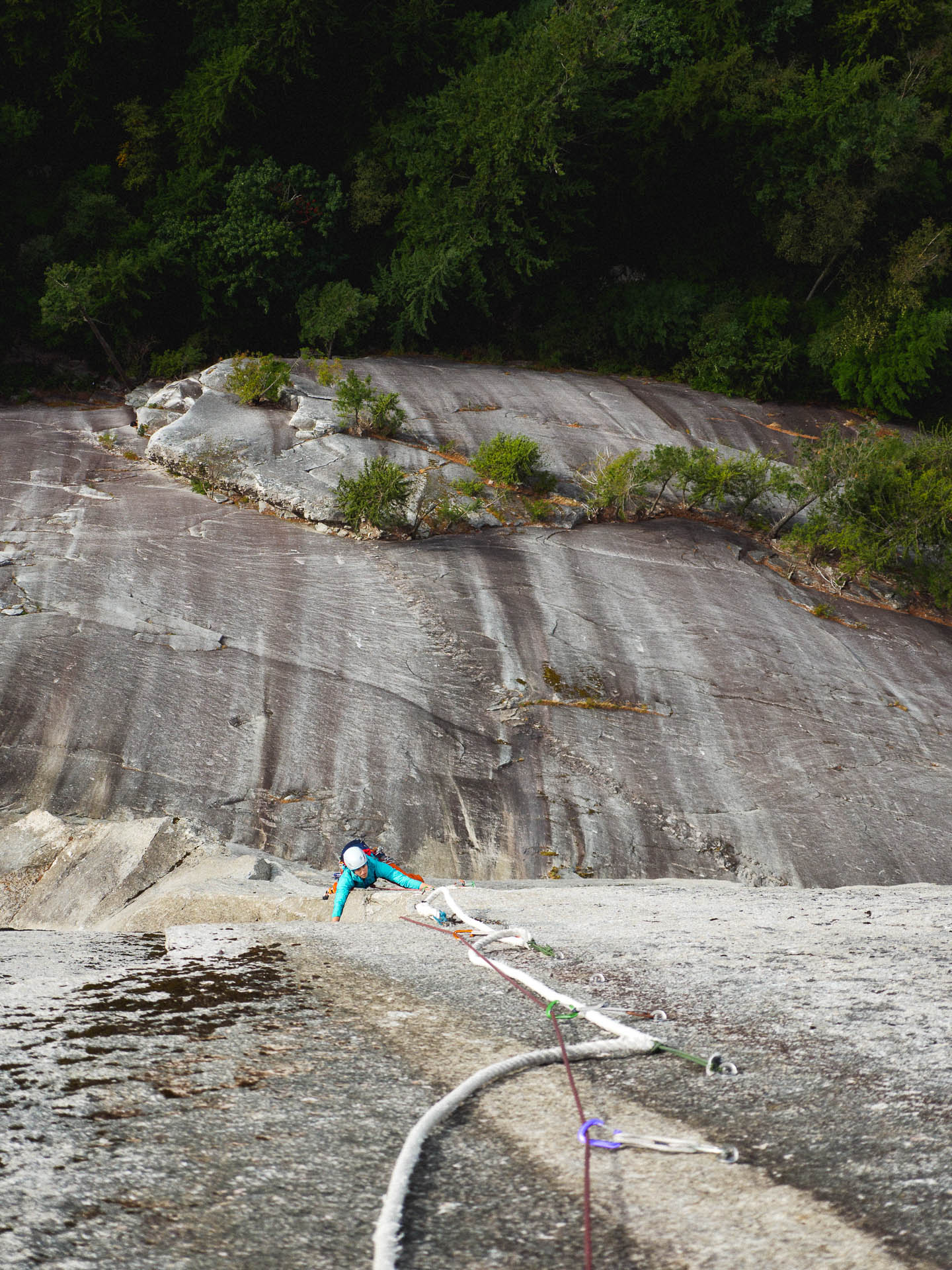 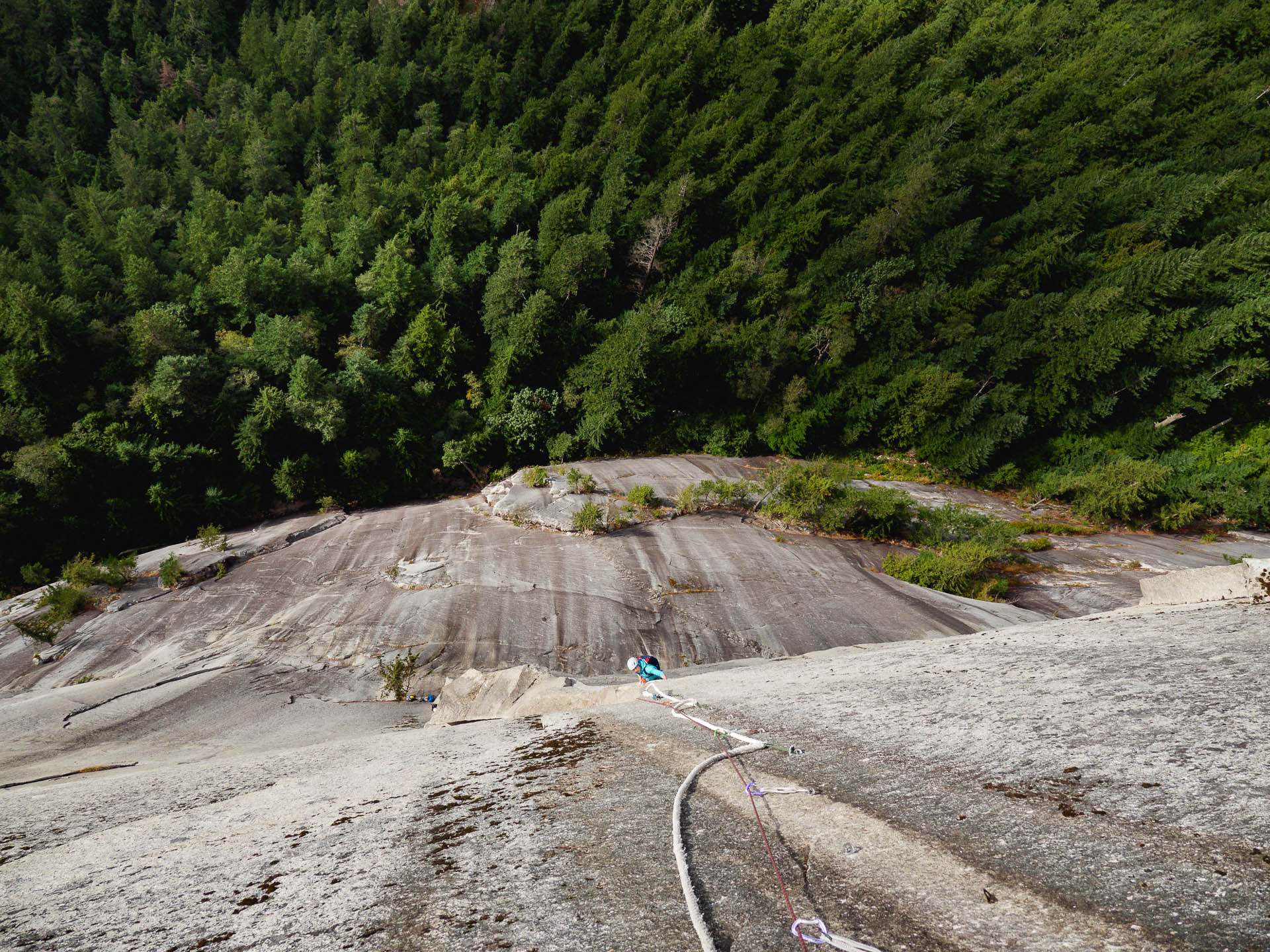 Just above the roof: a giant ship rope, a thousand feet off the ground, is waiting for you to pull on. You then climb it, the pumpiest part of the entire route, for six bolts of aiding. Between 1960s-batman-style rope climbing sections you get to rest on bends in the rope where it's been prussicked to a bolt. 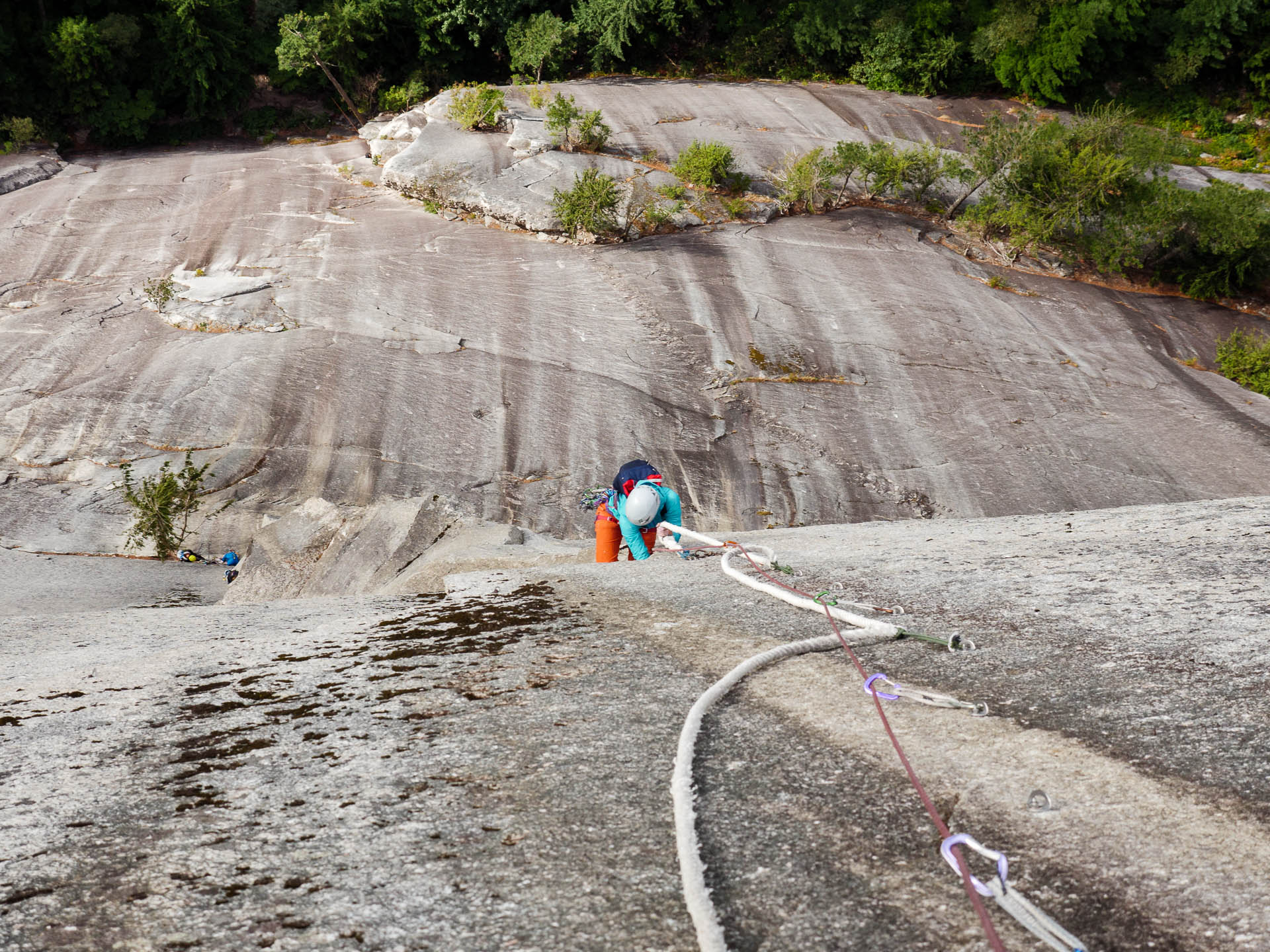 Megan nabs the rope to start the aid section

The second crux pitch, and the only one I couldn't clean.

Perry's is a massive block of an offwidth that strongly arcs to the right as it ascends. The pitch is entirely bolted, but feels the furthest thing from sport climbing. Powerful laybacking on smooth, low angle granite absent anything resembling a foothold.

The route escapes the lieback into a chimney with easy vertical climbing after to a giant ledge.

When climbing it with Nate, using his beta of skipping every other bolt to save strength, I took, then proceeded to whip repeatedly as I failed and failed to find the right feet out. Doing it again with Megan, I was too exhausted and intimidated to really even try. I kept the aid mentality of the last pitch and just stood on hangers as I went up. 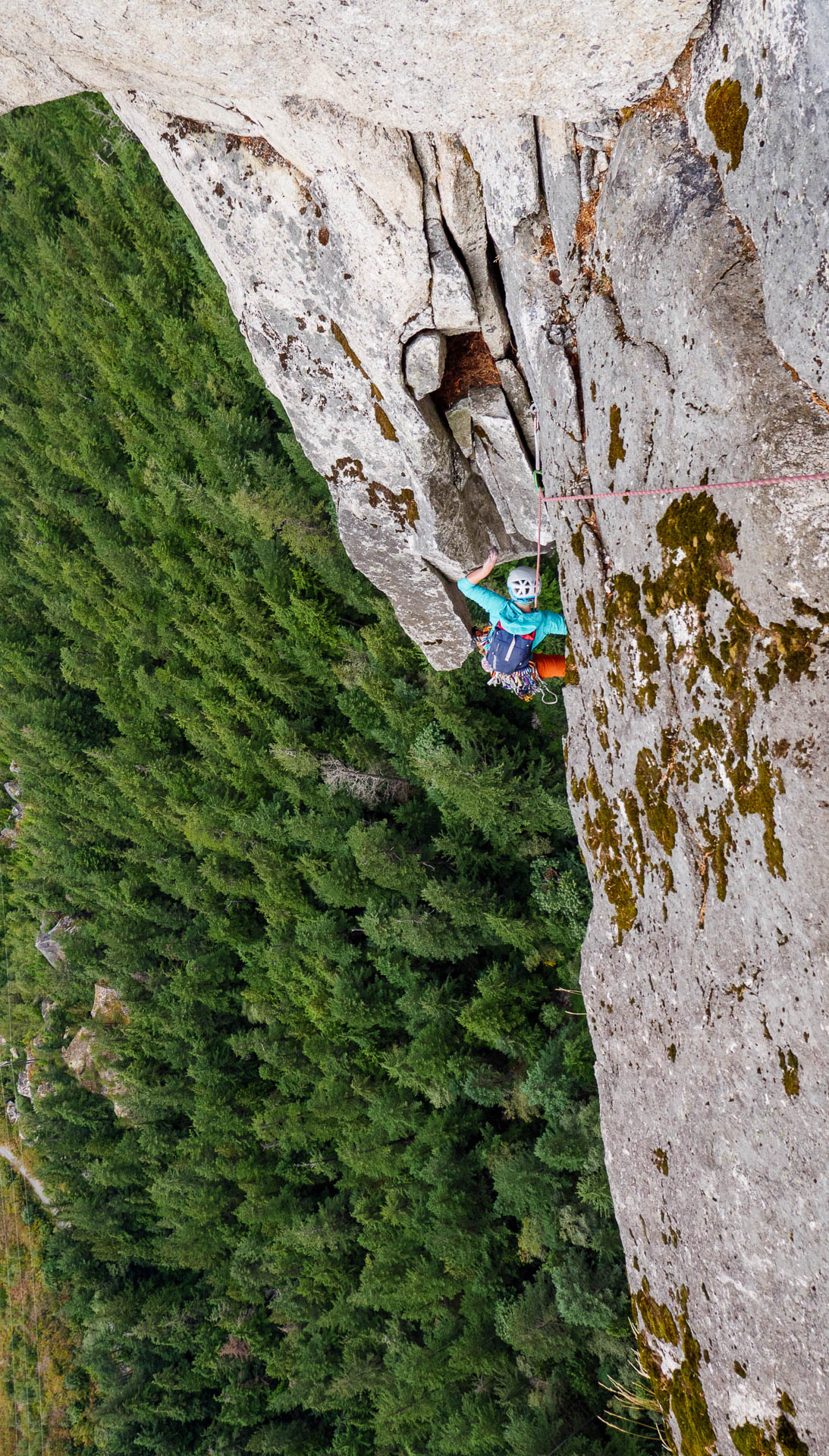 Stemming after the chimney exit

From the belay atop Perry's you walk straight climber's-right for ten meters before commencing this slab pitch. The eighth pitch is reminiscent of Mercy Me but with higher difficulty and thus more closely spaced bolts. It finishes with a series of semi vertical ledges. The final move is a very height dependent reach to crimps. Easy for tall Matthew, but adding a number grade for his tinier climbing partner... 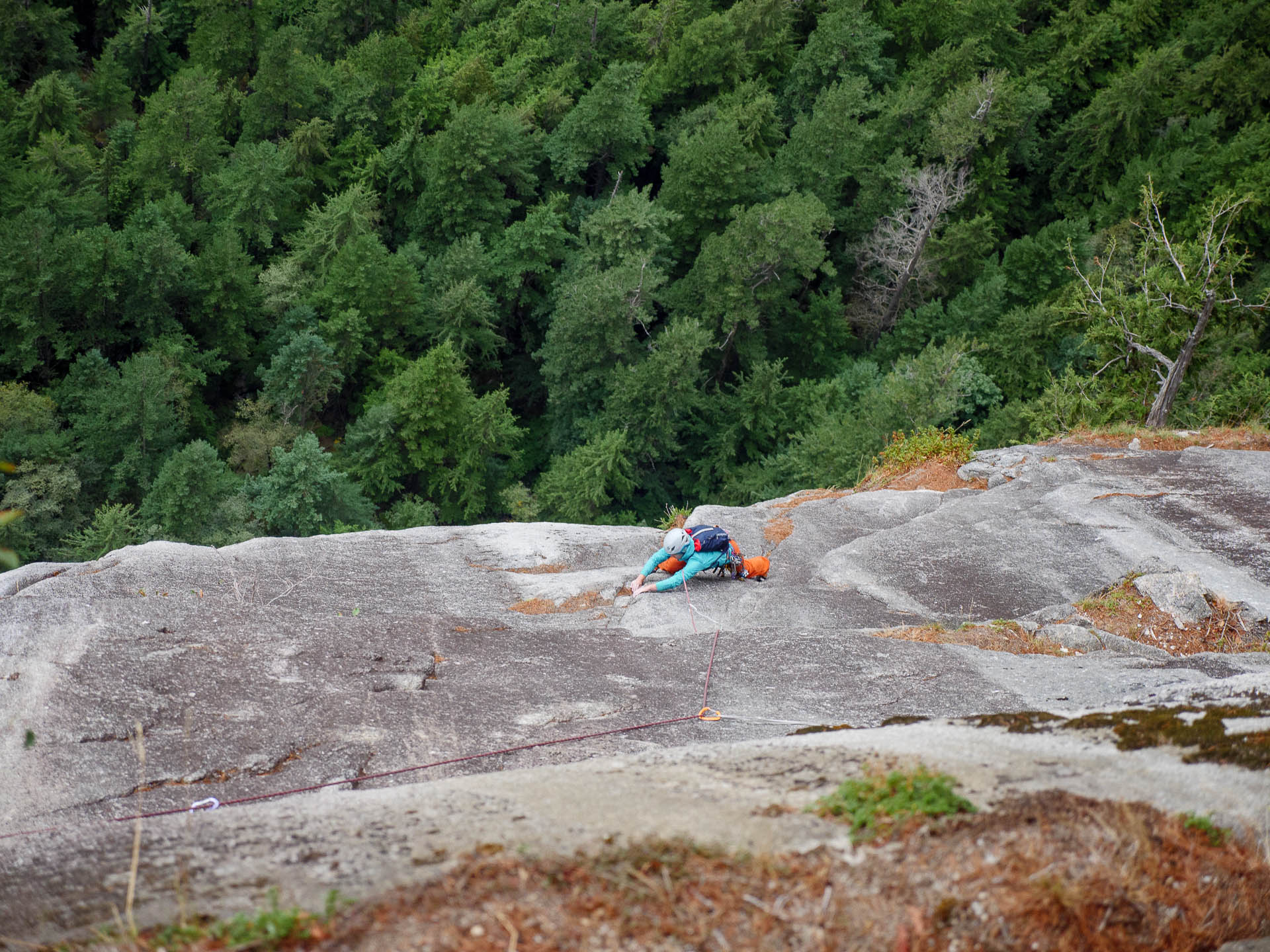 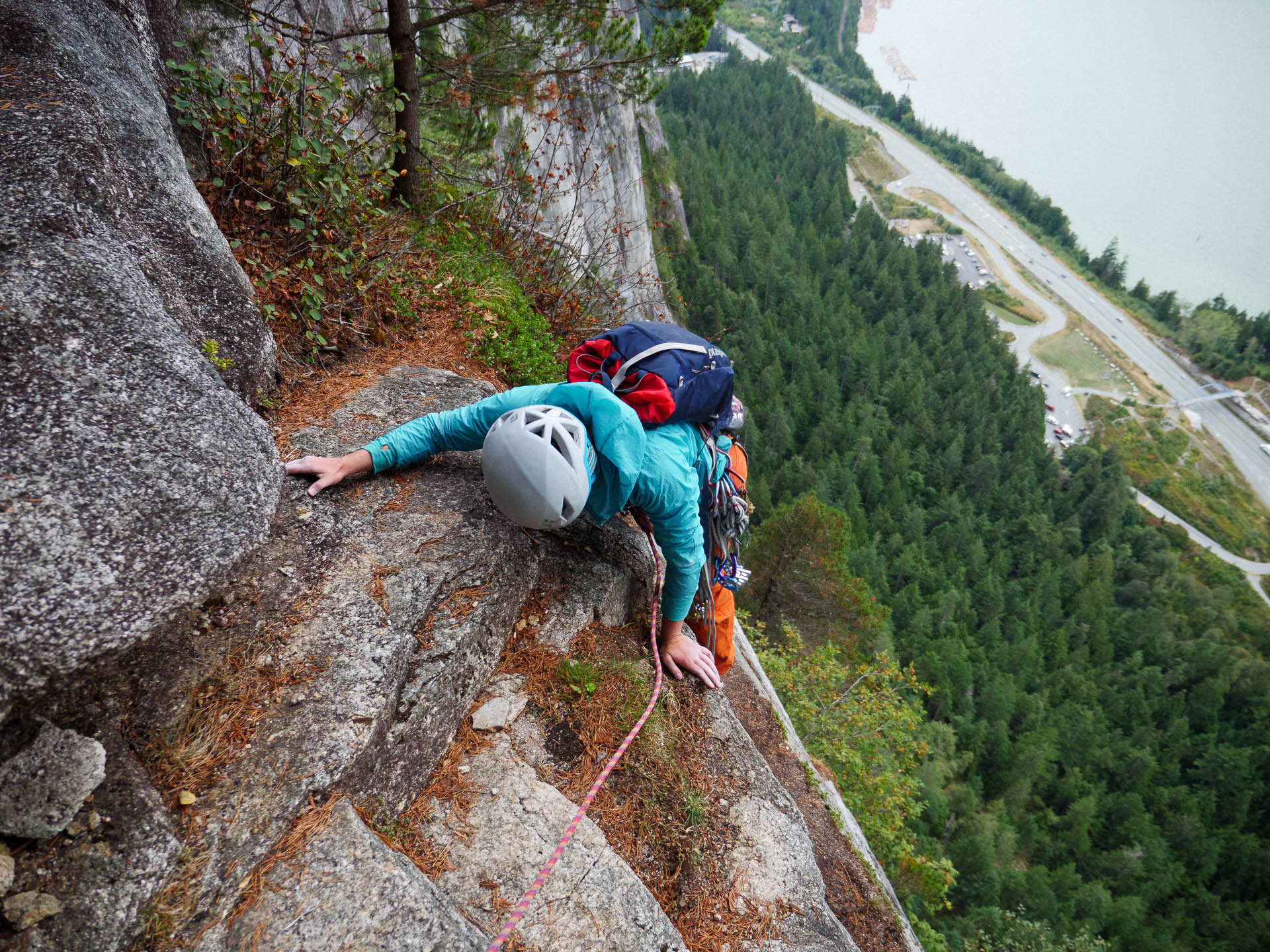 The only other pitch I don't have photos of. The Sail Flake finishes the route, though not the formation - still a few hundred feet to go to get to the top of the Chief, if that's what you're after.

Nate was characteristically quiet as to what exactly this pitch would entail on my onsight. "Wait, do I climb that tree?"

Fifteen feet of pure tree climbing to another small ledge. From there, I started up a crack. "Go further right Enlow." So I did. "Further right still."

"Wait, that?" Rather than taking the obvious thin and direct corner crack, Nate was slowly guiding me to a completely exposed undercling traverse.

So I cut out into the void, sticking .4s and .5s in the undercling and looking hard for feet on the vertical white wall. True to its name, The Sail Flake turns a corner and heads up after ten feet, then slowly starts trending left. Wickedly fun jug traverse, that. The last bit of climbing is a bodylength of hand crack to a dirty mantle.

The exit is a joy. A few hundred feet of airy shortroping along Bellygood ledge is the last of the risky business; from there it's tourist highways all the way back to the car. Go Squamish!