On the 16th of November I sent a quick email out to my family updating them on life in Asia.

Then I thought I should send the same thing out to my closest friends.

Two weeks later, I realized I may as well copy and paste it into a blog post and fill in some blanks at the end.

I think today marks a month in Asia.

Spent the first week in full vacation mode (ie no work whatsoever, actually on vacation) in Hong Kong. Managed to get in a day of climbing (how could we pass up climbing directly above one of the world's richest cities?) but otherwise stuck to more traditional forms of tourism. Megan wrote about our week there on her blog, replete with my photos. Since I haven't done any blogging of my own yet, go read about it on hers.

From there we went to our China "home", Yang Shuo. The fact that it's illegal for us to rent apartments or scooters that hasn't stopped us - it just means there's no paperwork to hassle with ;) So we own a gas scooter and have a fifth floor "apartment" (room and bathroom) with a nice balcony view at the north end of town. 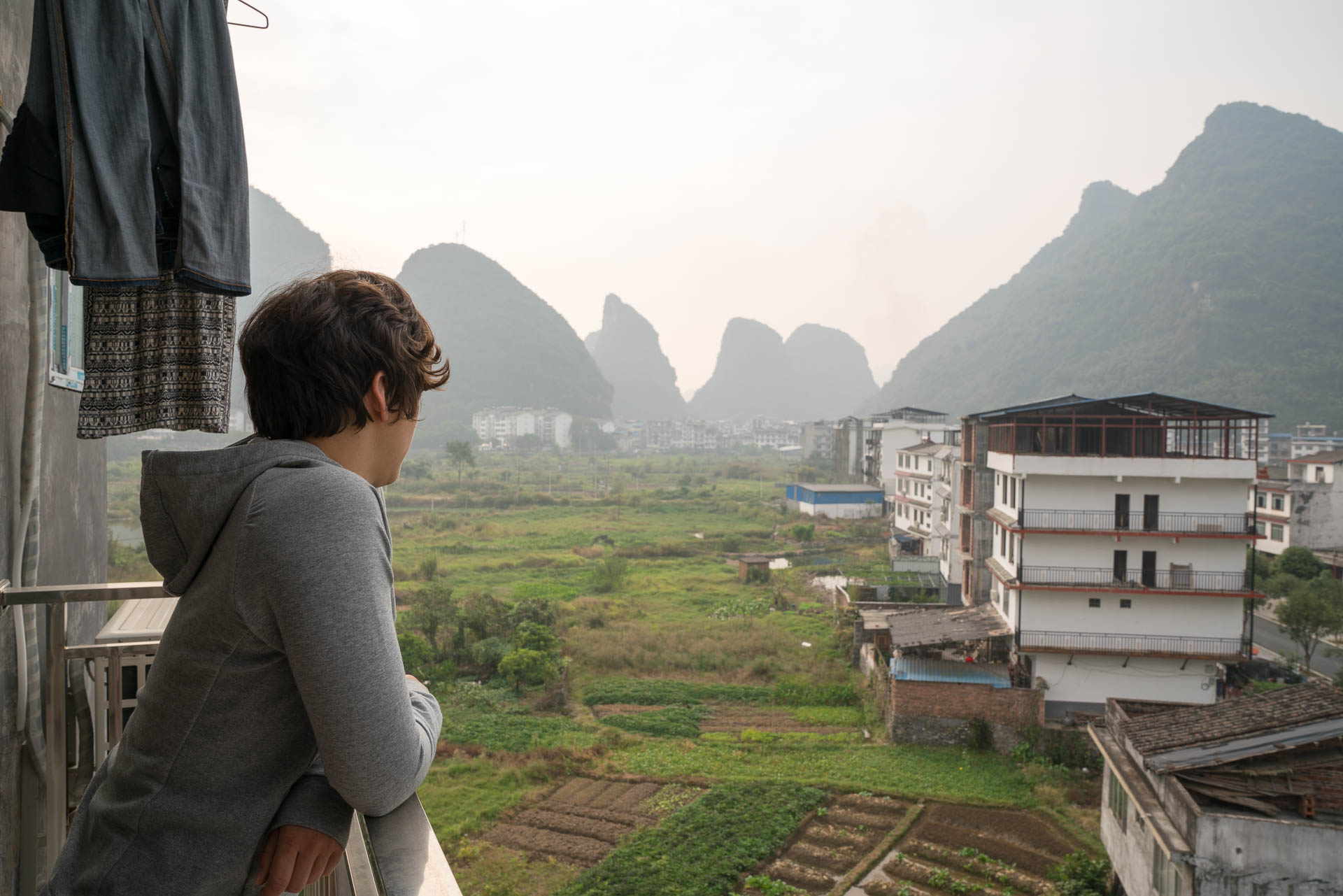 The downside to living in the country is the large number of leaf + trash fires...
Add that to the way the weather works around here, and we've had some few days where we decided to stay in rather than go out to breathe the air. Pollution you can cut with a knife. 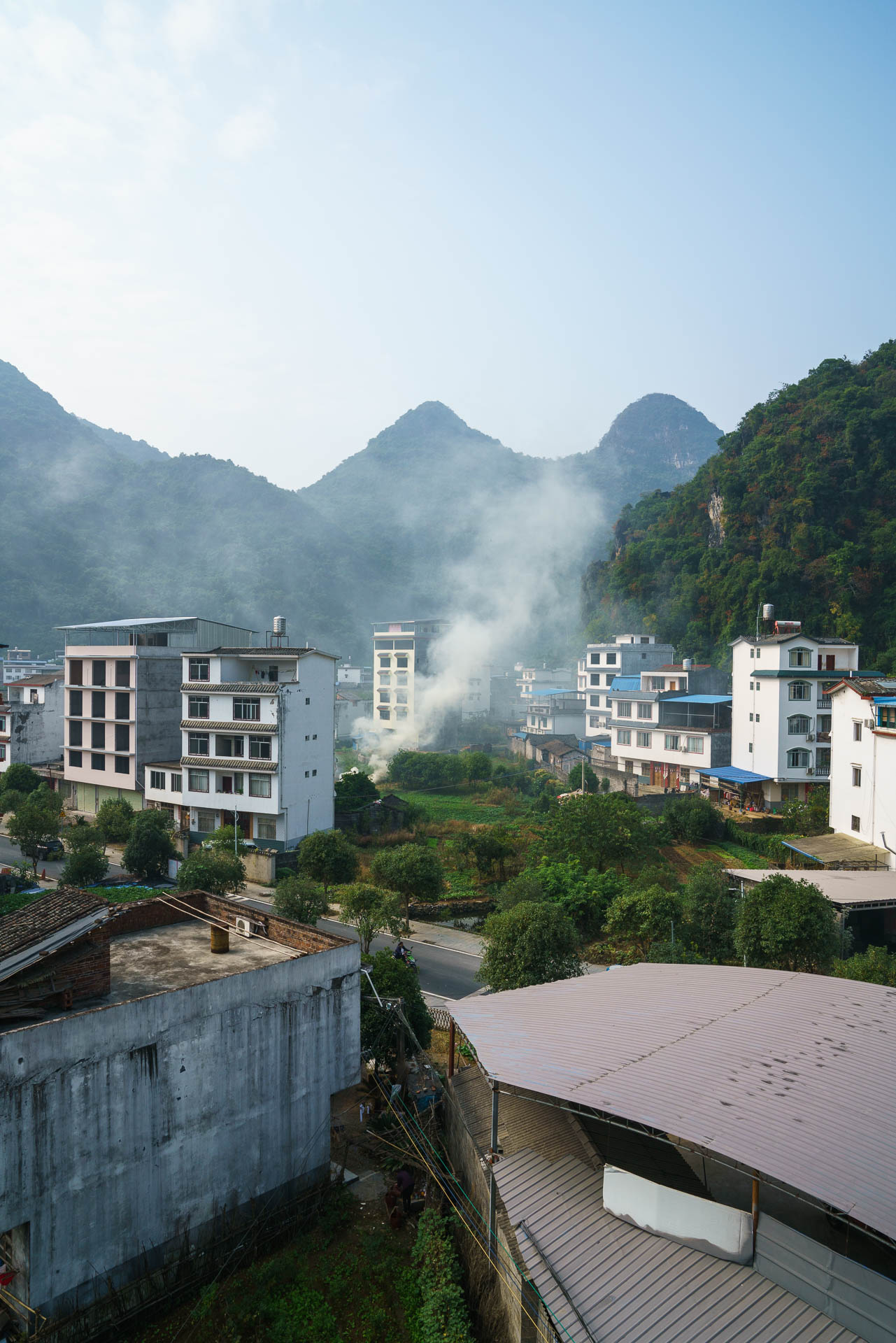 When we do get out though, the area has a lot of nature on offer - and a lot of climbing.
The region is populated with limestone "karsts", sudden mountains of limestone that rise steeply up out of the ground. That steepness often translates to good climbing... 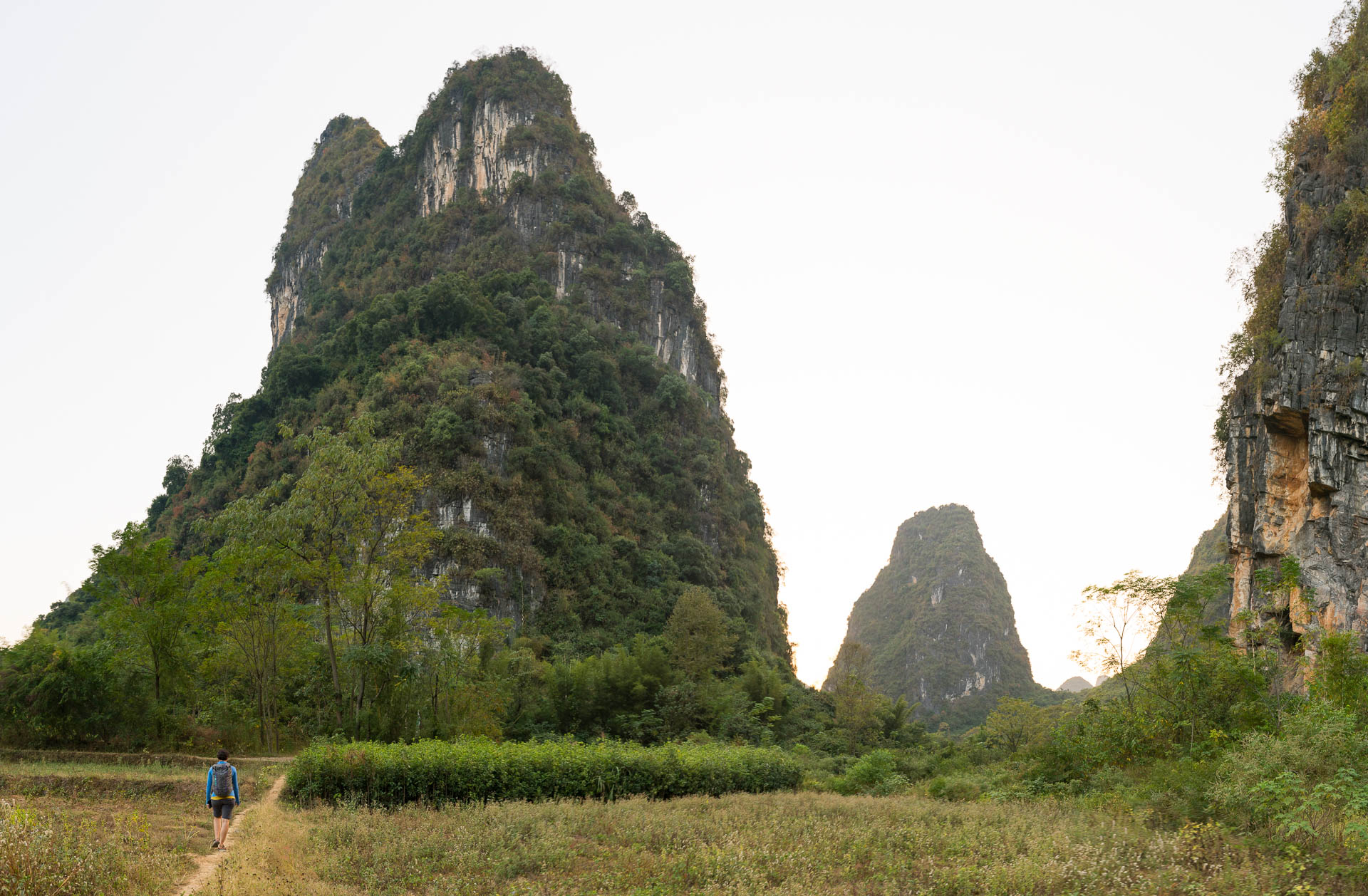 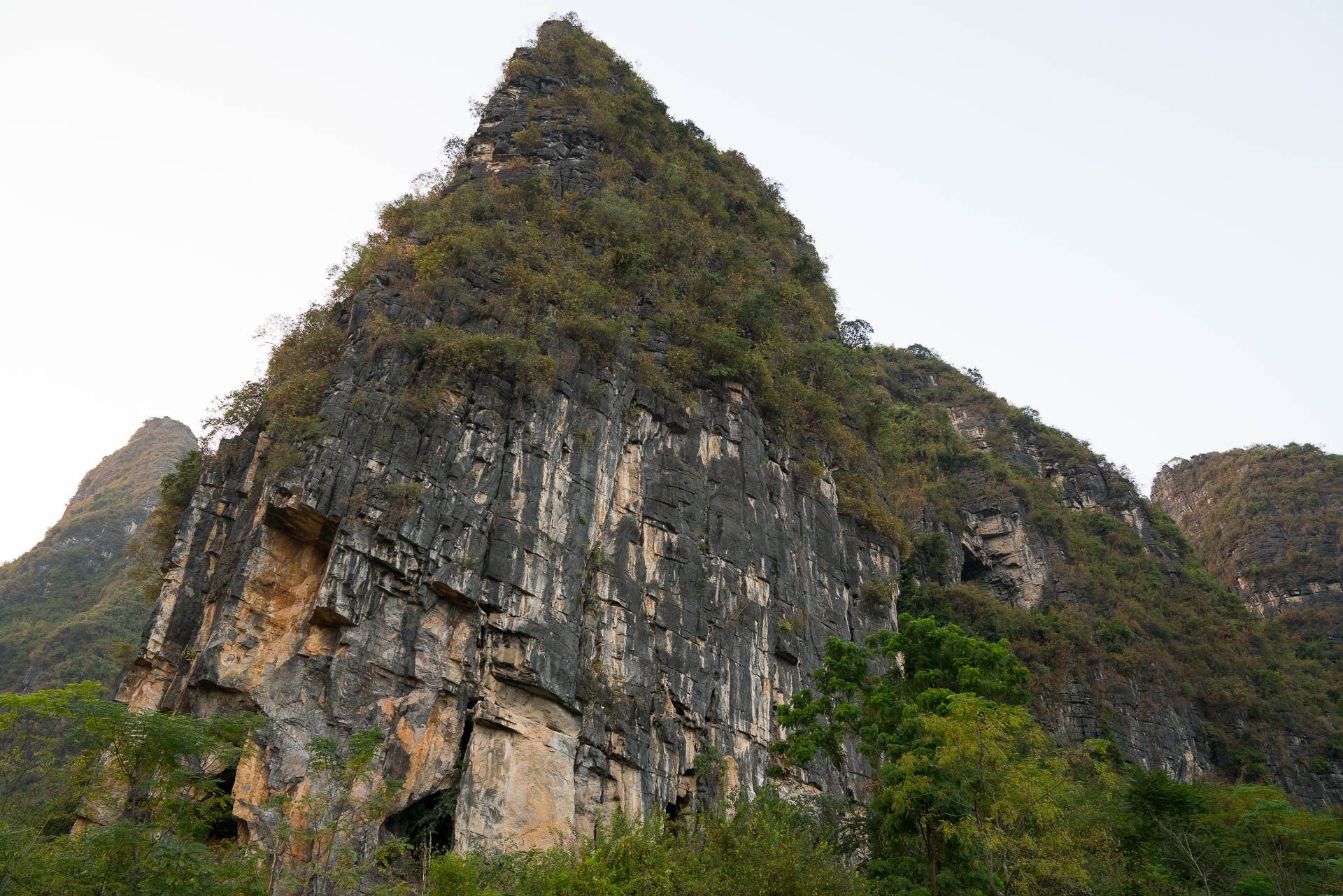 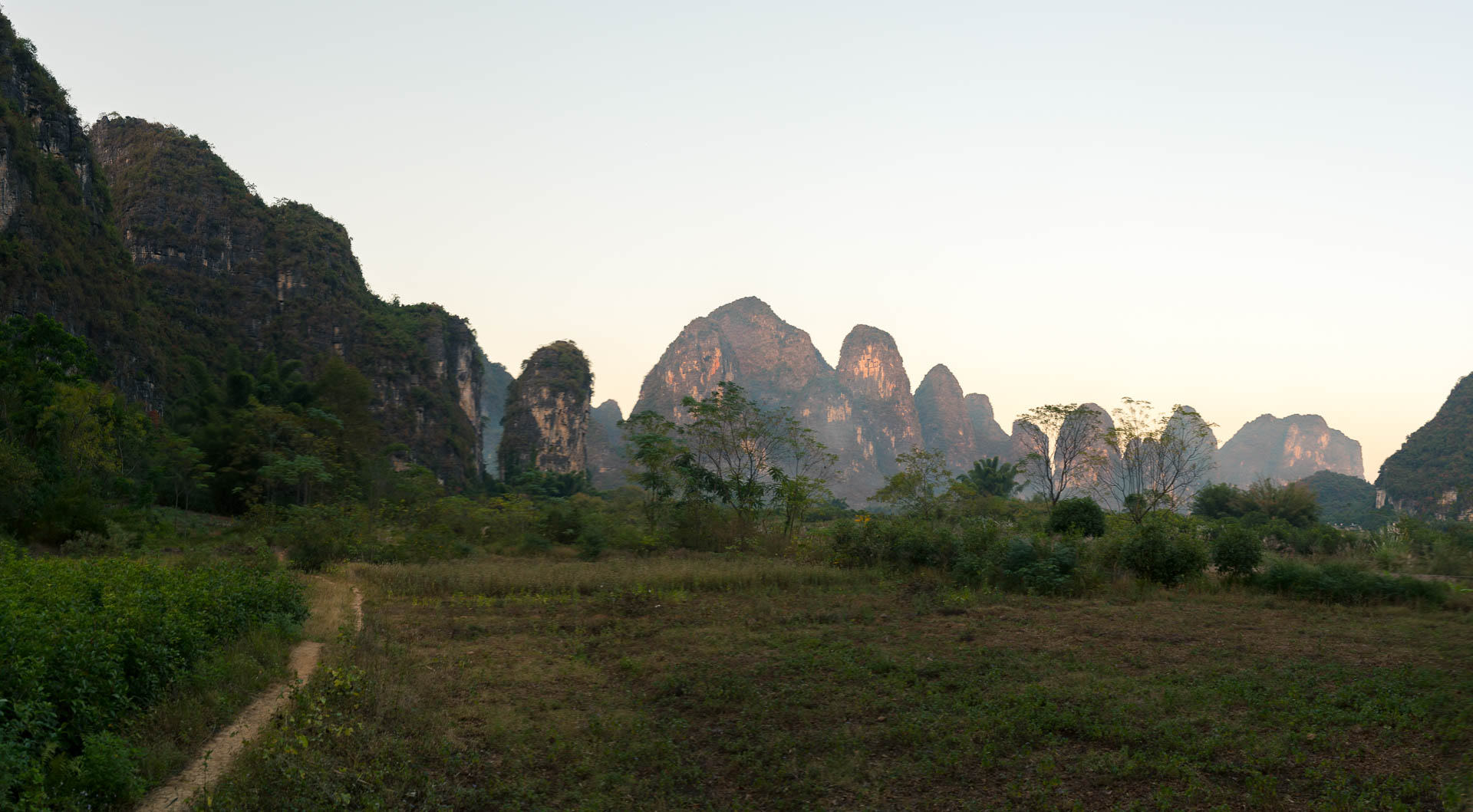 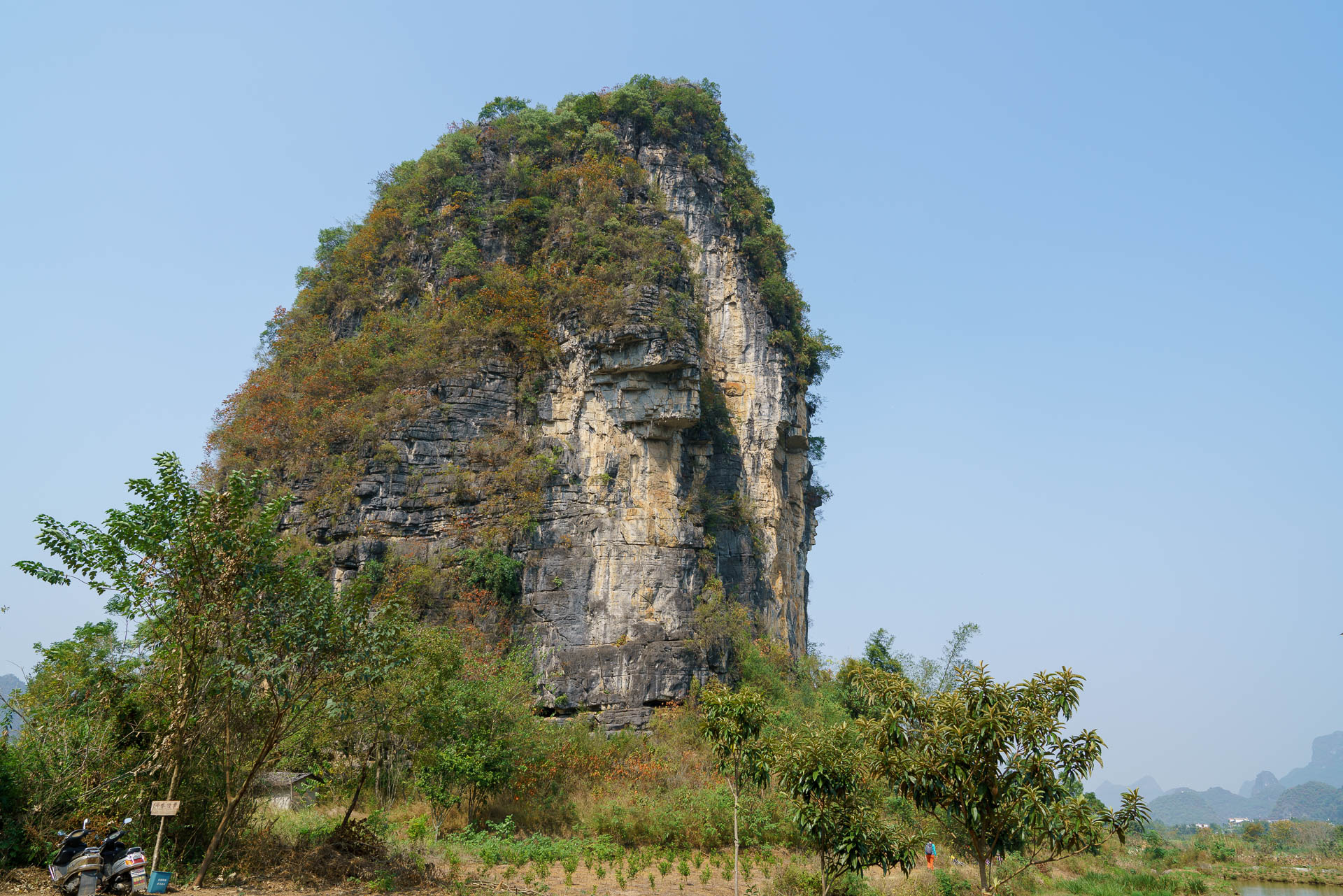 We get by here with Megan's basic Chinese vocabulary (she's picked up words for numbers and foods since she arrived - so we can order a meal and pay for it!) and my ability to read (because Chinese and Japanese use the same ideographs. I don't know how to say what I'm reading, but I can get the gist of what's being said: ie "Danger, rockfall.")

There's also a good bit of tourism going through YangShuo, so English is relatively common for such a small town 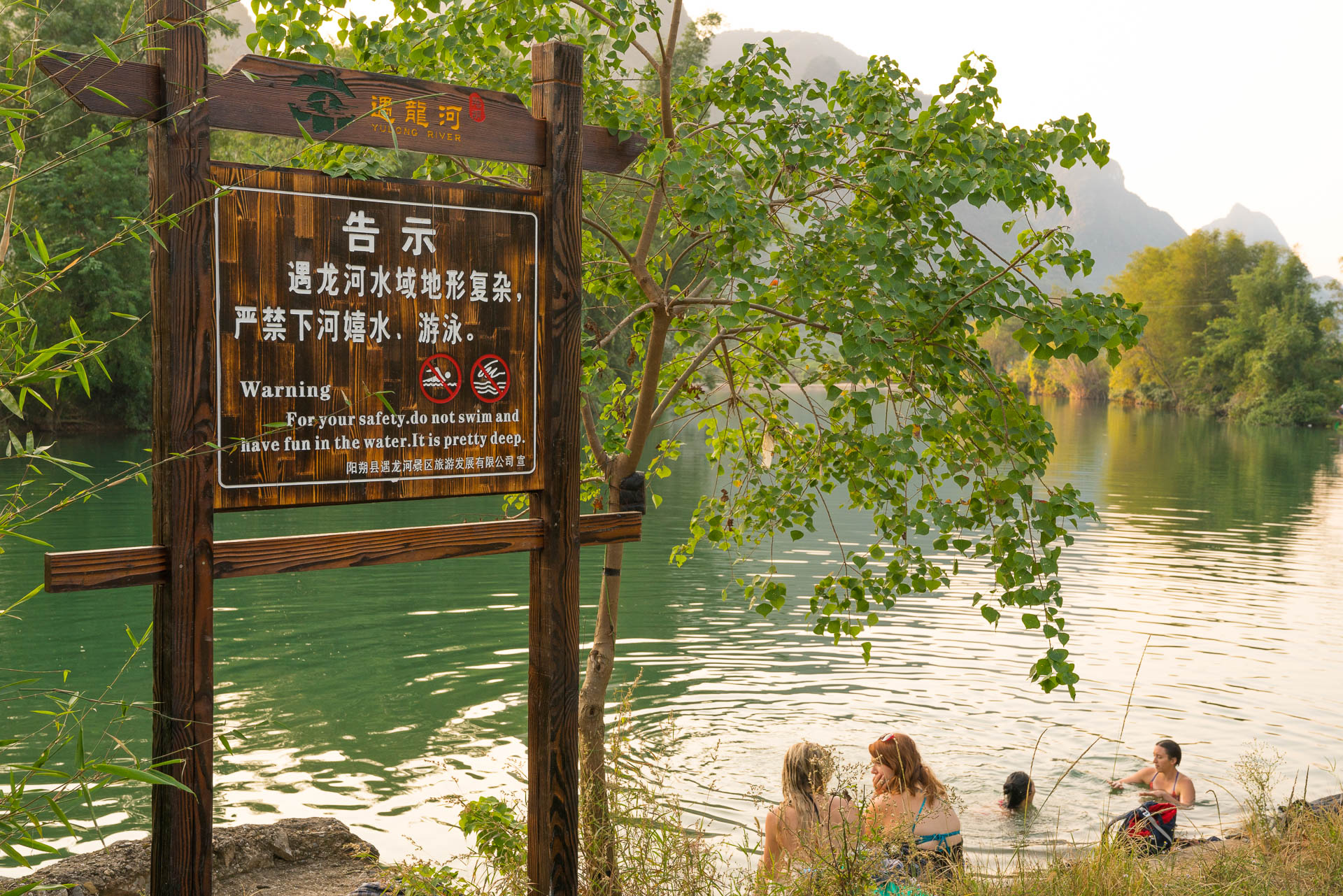 Warning:
For your safety, do not swim and have fun in the water.
It is pretty deep.

After two weeks living what I now think back on as "the city life", we moved out to climb in a very remote region, Li Ming. Here, we're happy when we have hot water to shower with (I write this email to you filthy and stinky - no hot water for three days), and survive the cold nights with electric blankets. Things are sunny and warm during the day, but the steep valley walls bring an early end to "day". I think we spend 14 of every 24 hours hiding in the bed, with its electric blankets, the only heaters.

Li Ming is a one-road town. We eat out every night, because there are no grocery stores. But then, "eating out" means going to one of two "restaurants" with an assortment of friends we've made here and stuffing ourselves silly for about $2/ea. While tasty, the options are limited, and I'm sure we'll be quite tired of the few combinations of oil, veggies, and meat (with rice) on offer after twenty days. 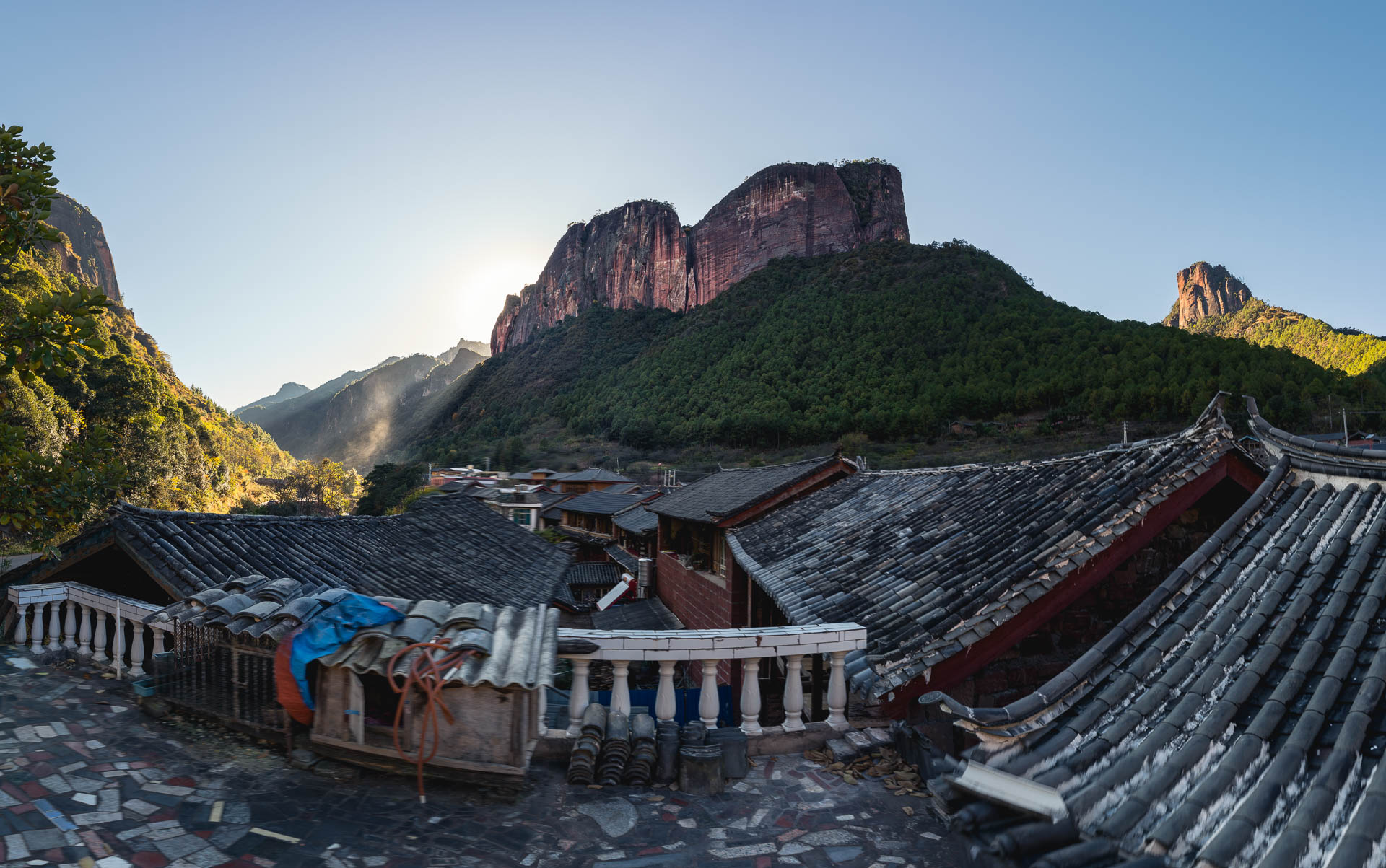 The view from the roof of our inn, in panoramic detail. Entering the shade (and subsequent sudden chill) of the cliffs just after 5pm...

The climbing here is sandstone cracks. Stick a body part in, get it stuck enough that you can get a different body part in and stuck higher up, unstick the low one, repeat til you're at the top...
Climbing cracks in November has become a habit over the last few years, when I'd run off to Indian Creek (Canyonlands Utah) to escape the not-enough-snow-to-really-be-winter-yet early parts of winter in Wyoming. So it's nice to be doing it out here. 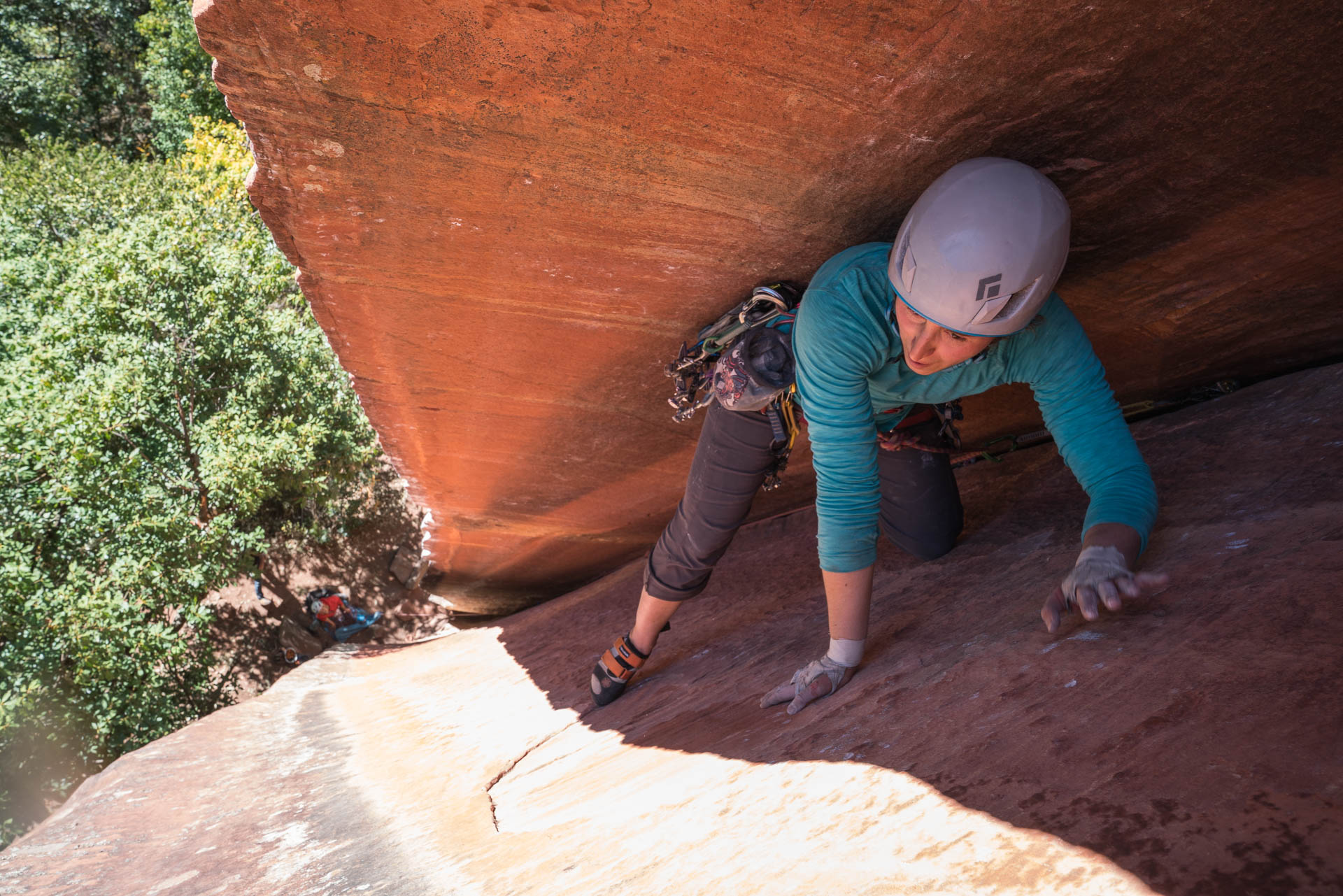 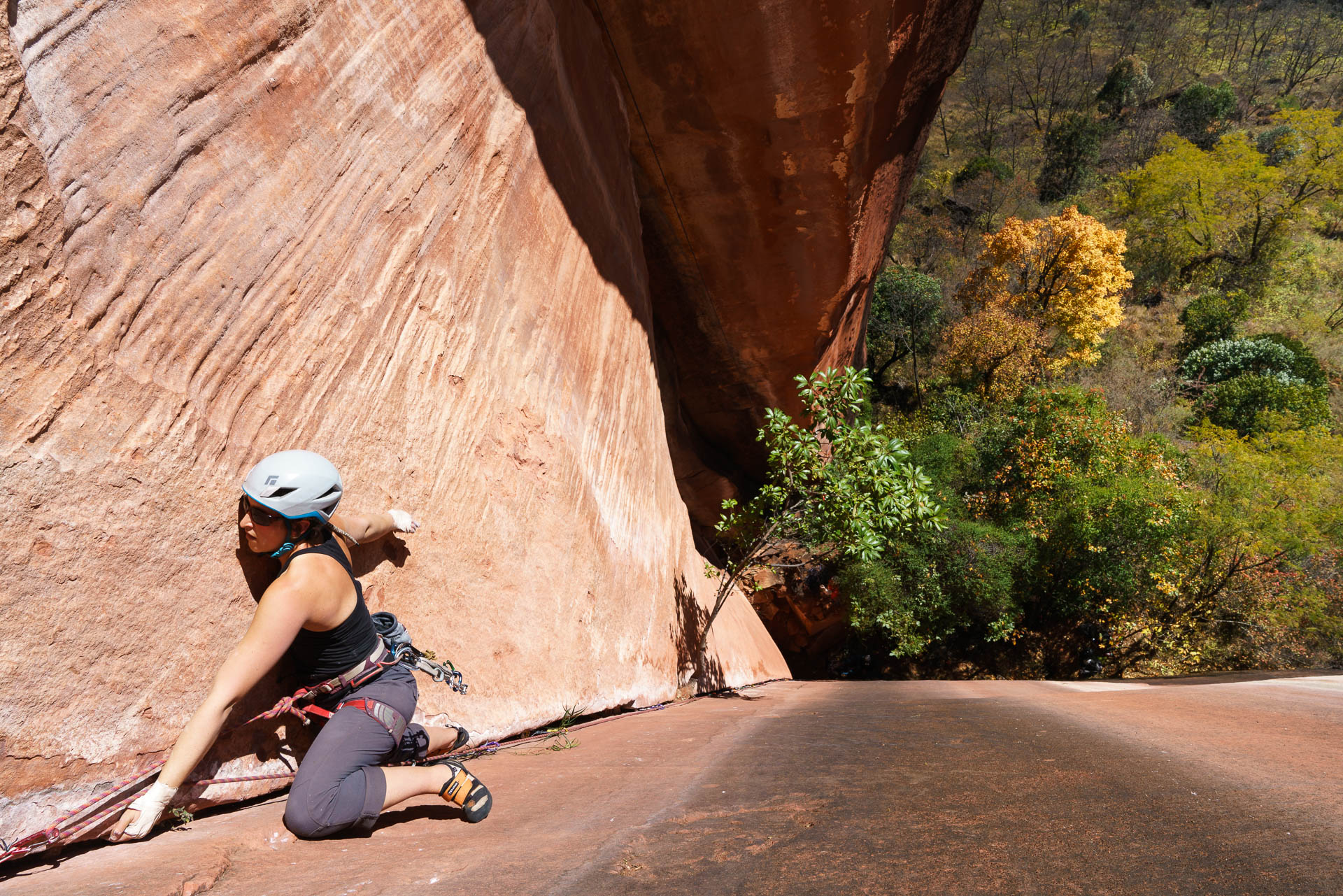 We'll be back to Yangshuo shortly after Thanksgiving, then leave China behind on the 15th. Where to next? We haven't quite decided yet. Our only for-sure plan right now is January in Laos. Japan, Vietnam, Singapore, Thailand, Bali, and Korea are all up in the air right now...

Today, not only have we made up our minds, but we've also bought all the tickets and booked (most of) our lodging.

On the 13th we leave China behind for Vietnam. Five days of climbing and four of city life there, then it's off to Singapore on the 22nd. Mads and Michelle invited us to have Christmas with them and the boys in Singapore.

Megan and I cut our Li Ming trip short to make it back to Yang Shuo in time to celebrate Thanksgiving with other foreigners. Realizing now how much we value celebrating holidays with others, I think we're both very happy to get to do Christmas with (a) family.

After Singapore we're going to go to Koh Yao Noi. It's an island in Thailand I've been to two times since starting this blog, and yet somehow it's never truly made its way into a post...

Finally, from Thailand to Laos. After which, Megan's fairly confident she'll be more homesick than travel-longing, so she might be heading home. I'll have one more stop to a country I've neglected for far too long.

Once March rolls around I might find my way home to climb Spring Break Sinks Canyon and the desert in the spring.