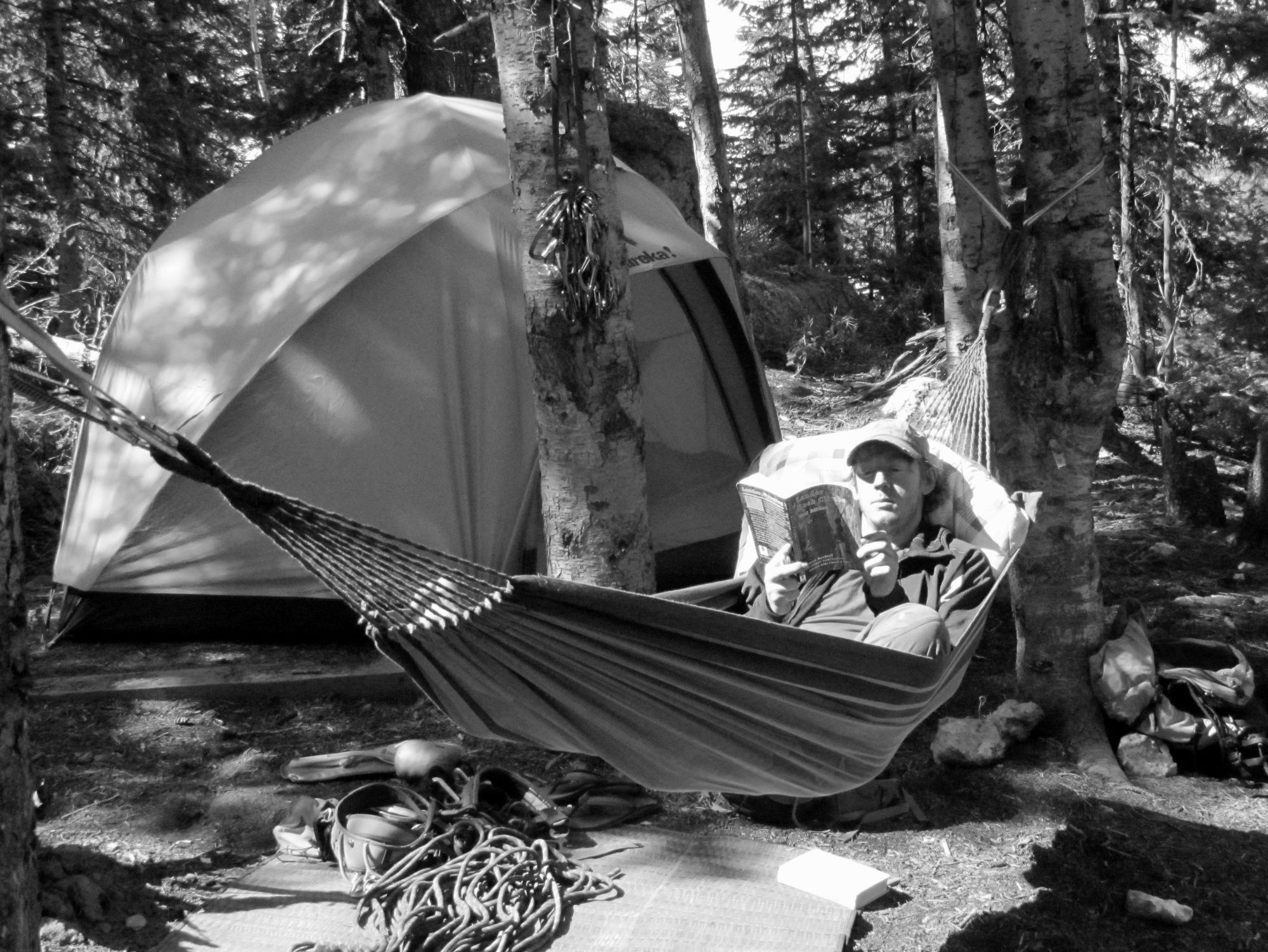 Alyssa and I had a three day weekend of climbing after a stupendous Fourth of July in Lander with a bunch of friends. Thanks for the fun guys, and particularly the accommodations Leah =)

After the show, Alyssa and I set up camp at the best-located campsite at Wild Iris, right behind the outhouse. Good thing too, 'cause we brought the french press.

We started climbing only after we had finished setting up camp, sometime after 2 in the afternoon. The wall was packed with families and the classics had massive queues, but we squeezed in what we could.

Trying to find an easy warmup with a star on it that was available, we stopped at the 7 Sam and Leah had done last weekend on Claim Jumper Wall. From there, we went over to Blooming Rose Wall and got on a bunch of  moderate routes I remembered having done with Ken a year earlier on my first trip to Iris. Funny story about that -- check the climb notes for more.

There was a large group of older climbers here running ropes on a 10d and an 11a near us. The routes looked pretty fun. I kept them in mind on the chance we'd be back at the wall later on in our trip.

There was also a guy with a mat I knew had to  have come from Thailand. He confirmed as much, and admired the shininess mine still retained. I'll use that to measure when I need to go back to Thailand (for trip #3): when my mat's as decrepit as that guy's was.

We ended our afternoon by hiking over to see if there was still a line to get on Red Ryder; there wasn't.

After breakfast we made the trek to Main Wall. Alyssa decided she was going to get back to leading today, and started out on Dynamitic (7). After that we left Five Ten Wall to look for a 9 at Hot Tamale Wall. We kept finding climbs to do there, and ended with my first Lander 11a.

Steve Bechtel, author of Lander Rock Climbs, was there with his family. Yeah, turns out that's a real person.

Afternoon thunderstorms looming, I tricked Alyssa into leading her first 10b, which was also her first 10 (someone had to get my gear off the rocks, rain or no). We raced the storm back to camp and took a substance abetted nap (mm, Grand Marnier).

Our two hour power nap had us all built up for one last climb in the evening, and so at 7:30 we were in front of a classic 10c over at Zorro Wall, something I'd always meant to do but hadn't due to scarcity of climbs (in my range, that is) and distance from the high-density areas. So. Glad. We. Went.

Two solid days of climbing that had ended with a pump machine had sated my appetite for climbing for at least twelve hours, so Alyssa and I had a leisurely Sunday morning.

She went for a trail run with Grady, while I lay in the hammock and re-read "Brainwave" for the umpteenth time. It's a fun short sci-fi novel exploring the ramifications of an exponential increase in human (and animal) intelligence across the Earth as it leaves, essentially, a galactic brain-dampening force field.

Alyssa came back from her run and joined me in the hammock as she read a birthday present from Reilly, written by one of her favorite singer-songwriters.

When afternoon came and we found our bellies full we decided to do some more climbing. We had been talking about a two star eight for a while, and Alyssa wanted to keep working on her leading head by putting up some climbs we'd done before. We hit up a few walls by the end of the day: La Vaca, Winchester, and Blooming Rose walls.

I made huge growths as a climber this weekend, like I haven't felt since my last Thailand trip. I had been saying for a few months that I really wanted a weekend alone with Alyssa to do "hard" climbs, and it finally came together without us evening planning for it. But now "hard climbs" aren't really the same. I onsighted my first 11a, and realized that climbing 11s is something I can do. I became okay with the idea that I might struggle with something, but I know that my gear isn't going to get left on whatever route I decide to get on.

This weekend was just a huge boon to me as a climber; after a few weekends of not feeling like I was making any real progress as a climber, feeling that I was sticking to easy, known routes a bit too much, well, look at me know. I took a huge step forward, and am very excited to see what happens next time I'm out there.

A big thank you to Alyssa for the support (literally and otherwise) this weekend - I wouldn't've made these steps without her. Not to mention, it was inspirational to see her step up her leading - how could I not do the same?

Just the facts, jack. Every route, listed once even if we climbed it multiple times, with the guidebook's ratings and stars and no commentary from me: