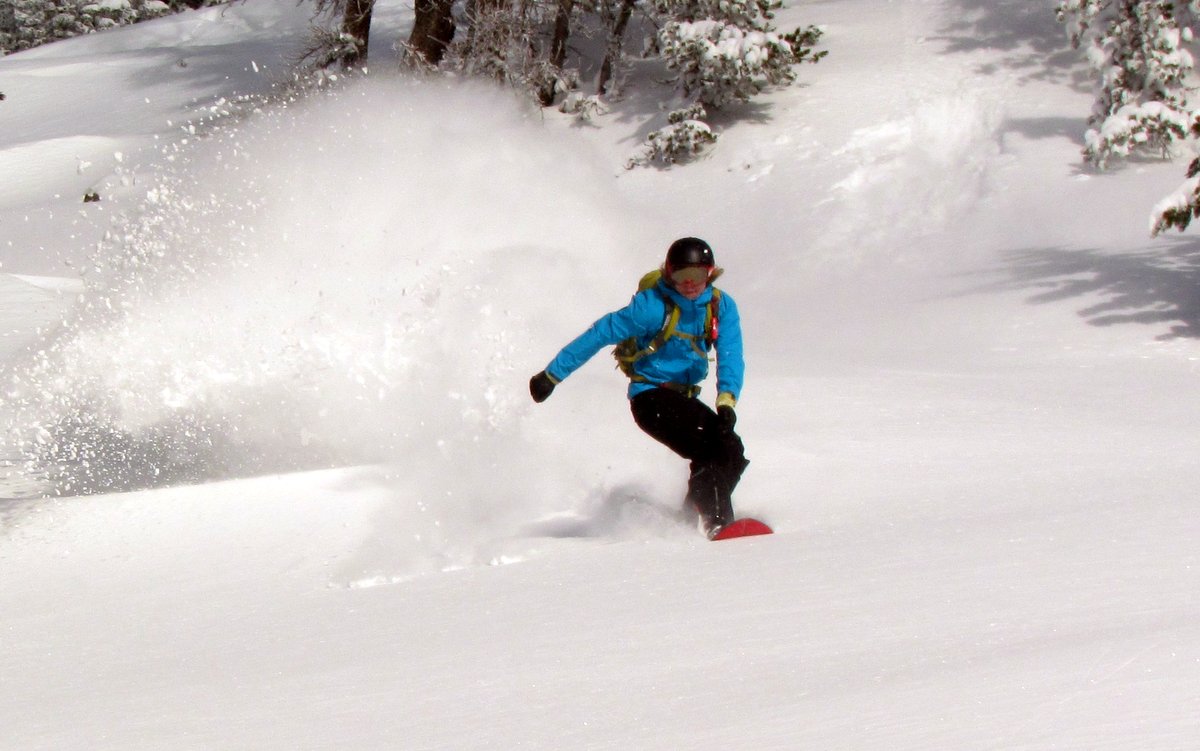 Disappointment Peak was swiftly followed up with more mellow slopes in Togwotee Pass, the mountain pass between the Tetons and Lander.

Andrea, Martin and I first skied the area about two weeks before, when they were leaving Lander for Jackson. This time around Alyssa and I were leaving Jackson for Lander, and it didn't take us a few hours bushwhacking to figure out where we wanted to go.

The approach started mellow, short and easy off the road, and Martin charged through the deep goodness.

Alyssa and I got to take our time in the back and enjoy the view.

The weather was a nice contrast to what we had gone through the day before in the Tetons, with nary a sight of the sun. This time, it wasn't long until we had dropped our shells and were enjoying a skin-up in baselayers.

Martin took us to a clearing that looked like good fun, but needed investigation. He went off and put himself in the line of fire to check a pit, and I took lead on trail breaking. Things got steep and funky from there. I think this photo of Alyssa sums it up well.

Eventually, it got to the point that attempting to go up via my route just got silly, so we did our run.

Our first run was short, but outrageous.

I used my camera as an excuse to go first again, and got some fun snaps of Martin's stylish ... style.

Poor Alyssa went last, and over the same spot Andrea and I had. By the time Andrea and I went through it, we'd scraped all the snow off, and Alyssa ended up caught in our debris and tracks. I've got a bunch of photos of her, but I don't think she'd want most of them seen by people.

Still, she made the best of it on her way down!

None of us took  much convincing that a second run was in order.

Martin found a new spot for us, past an area of instability that I couldn't navigate on my way up, and so we got new tracks for run number two. I didn't get the camera out for it though

Martin and I took one line, Alyssa and Andrea another. Martin scouted ours and took off a good amount of snow, but my board's no longer hurt by rocks. The three meter drop after the scrape caught me a bit off guard, but WAHOOOO!

I didn't manage to get my camera out, but Andrea got this amazing one of Alyssa that makes up for my poor turn earlier.

After run number two there was Much Rejoicing, followed by a really enjoyable traverse back to the road,

It took no time at all to get down to the road, where we got to see some amazing light from the setting sun and where we realized we had a terrific view of our lines up above us.

Mr Gradles was waiting for us in the car, which I got to first. He was pretty happy to change the snow to a different color, and see his mom again.

Andrea, Martin and I got together again a few days later for more adventures in TNP.