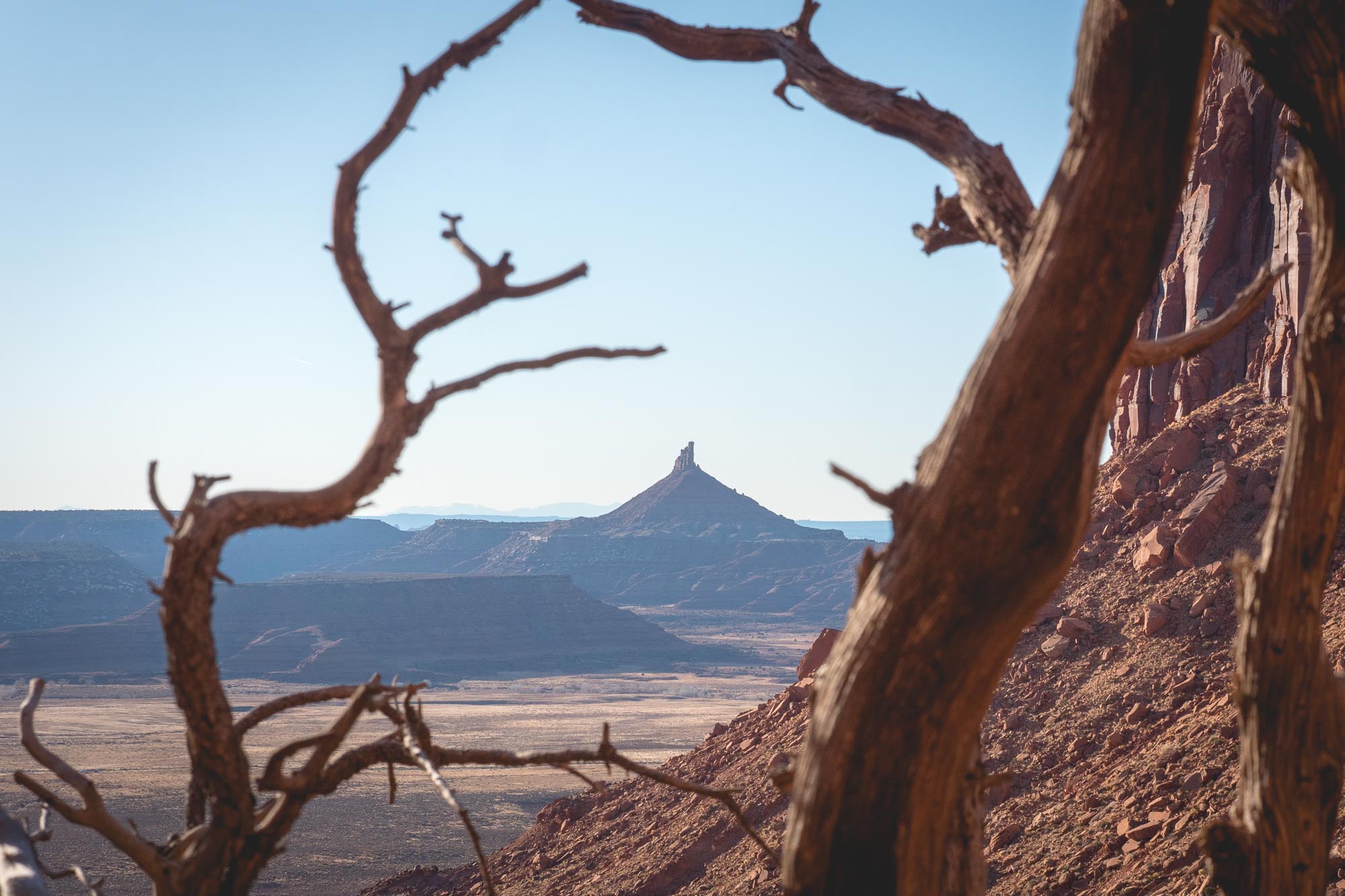 We all convened around the campfire after our lovely day at The Wall to come together to remember a time when Native Americans gave pilgrims cams in the desert.

A car rolled into camp late at night. Holding out hope that it was Octavian, who had promised to be in the Creek that night, I ran over to the car. It could also have been any of a half dozen people Thomas and I had drunkly invited to our dinner while looking for Matt Steele and Reese.

I inquired, trying to figure out who these three dudes were.

drawled an all too familiar voice.

I jumped that man with a big ol' hug. He'd made it after all!

When our hug broke, Reese's headlamp illuminated a blue-puffy-wearing man stepping around the trunk.

Another hug. I was a happy boy. It was a Creeksgiving miracle.

"And who's the third guy fellas?"

"Enlow, this is our friend Tom."

Belatedly, I realized that my hand was completely invisible in the pitch black. I had turned my headlamp off so as to not blind my friends as I hugged them, and Reese had done the same after I'd said my hellos to Steele. Tom wouldn't be able to see that a hand was being proffered.

And so I gave my new friend - because any friend of Steel and Reese's etc. etc. - a hug. Reese started snickering and Steele and Tom joined in. Before I could fully enunciate the "what?" on the tip of my tongue, Reese flashed his headlight on and spotted it directly on Tom, giving me my first look at him.

I grabbed that sonova right up again and gave him a proper good Creeksgiving hug. Last I heard, Nate was too busy spawning and building a lair for his fruited seed to make it down to the Creek. It wasn't that I didn't know he was in the Creek, it was that I knew he wasn't.

And those sonsabitches had played right into it. Nate laughed about how cold the hug "Tom" had gotten compared to the authentic one I put on the Canadian.

But Holy Bawls. The happies.

And so I brought my three friends (who in my mind were essentially the reason for the season, as I'd never have become a Creeker if they hadn't been there that very first go around), back to the Creeksgiving feast and fire laid out by the good people of Superbowl #1.

Introductions stepped almost immediately to Reese announcing that this Creeksgiving would start off with the shotgunning of beers.

After that, well, this photo sums up the evening I'd say:

Or at least, that's how it looks in my mind.

I've heard some good stories about it though.

Tenderloins Wall Or: The Morning After

I woke up feeling fresh in my bed in the van and didn't think a thing about how I'd gotten there or how I could possibly be moving under my own volition (those thoughts came later in the day). I got coffee going, cooked and ate a good breakfast, and thought about taking the day off. Somehow Shane and Rob talked me into going to Tenderloin Wall while everyone else headed towards Donnely.

I started sobering up on the drive. The hangover hit on the hike up to the wall.

Shane, fearing gumby hordes, kicked things off by putting up The Question Mark, a 5.11+ splitter that starts with a .5s roof and then transitions into fists that walk up the wall in the shape of a question mark. I aided the route on top rope.

Recognizing that my day was done, I hiked around while Rob and Shane did another route before we all called 'er a day. Those boys were maybe feeling a little rough as well. 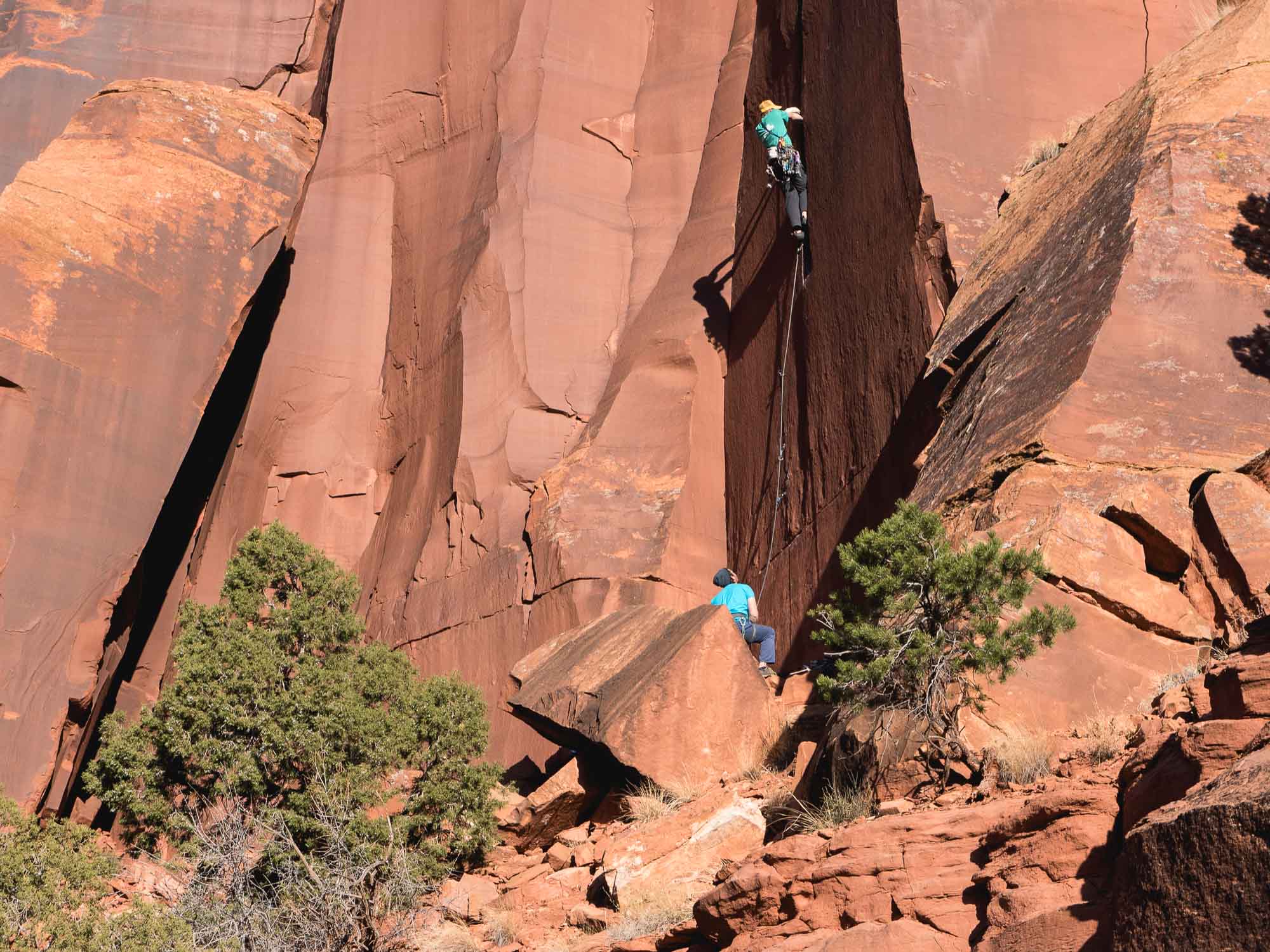 Yep. I had a one route day, on top rope, pulling on gear. 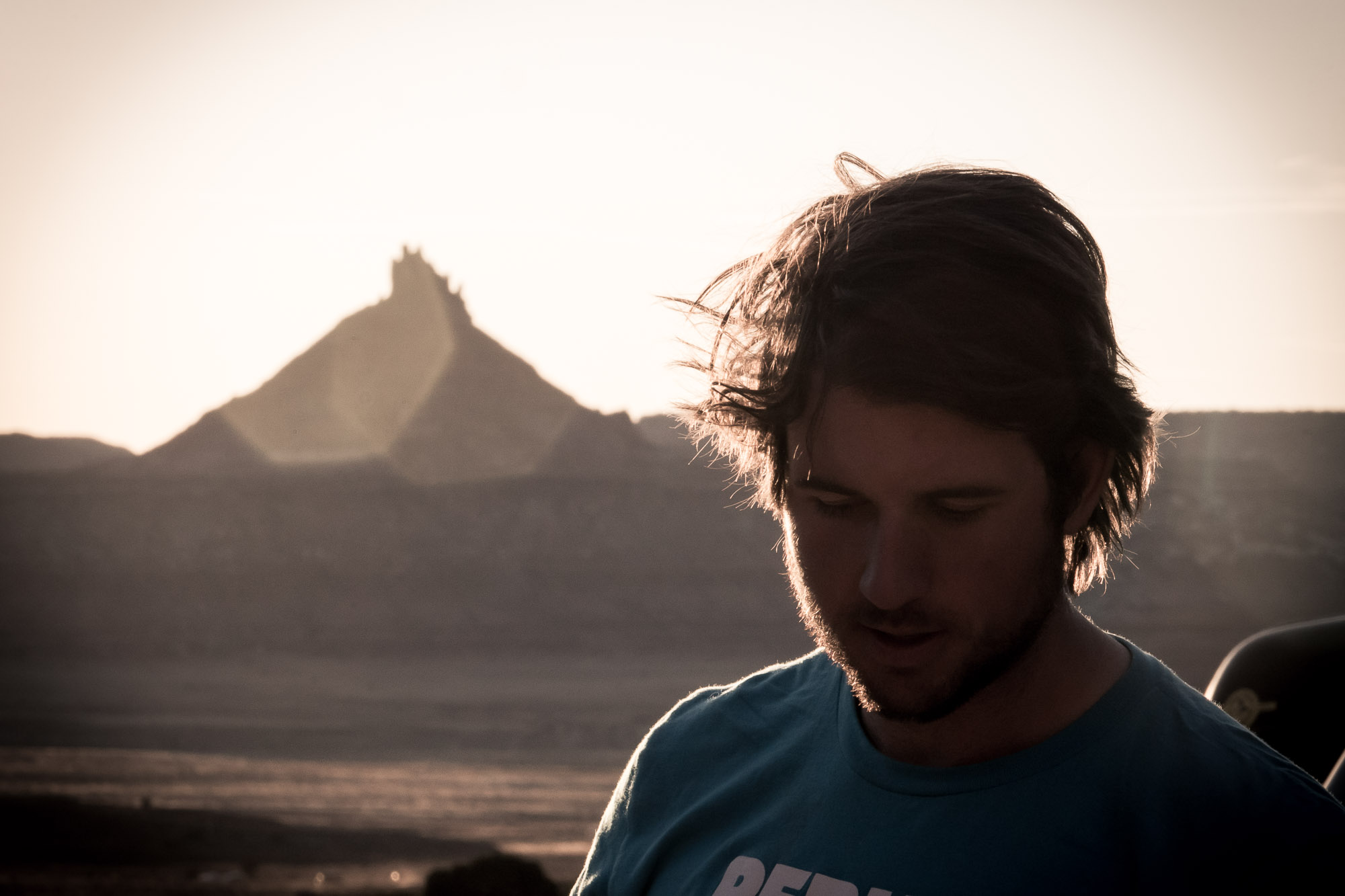 We rolled out to Second Meat Wall, with every interested member from Superbowl #1 packed into the van, and the three Creeksgiving brothers in Reese's truck. We only got the van halfway down the dirt road to the wall before we saw Reese flipping around and coming back our way. Second Meat was overrun. We enacted a new plan to head to Power Wall. 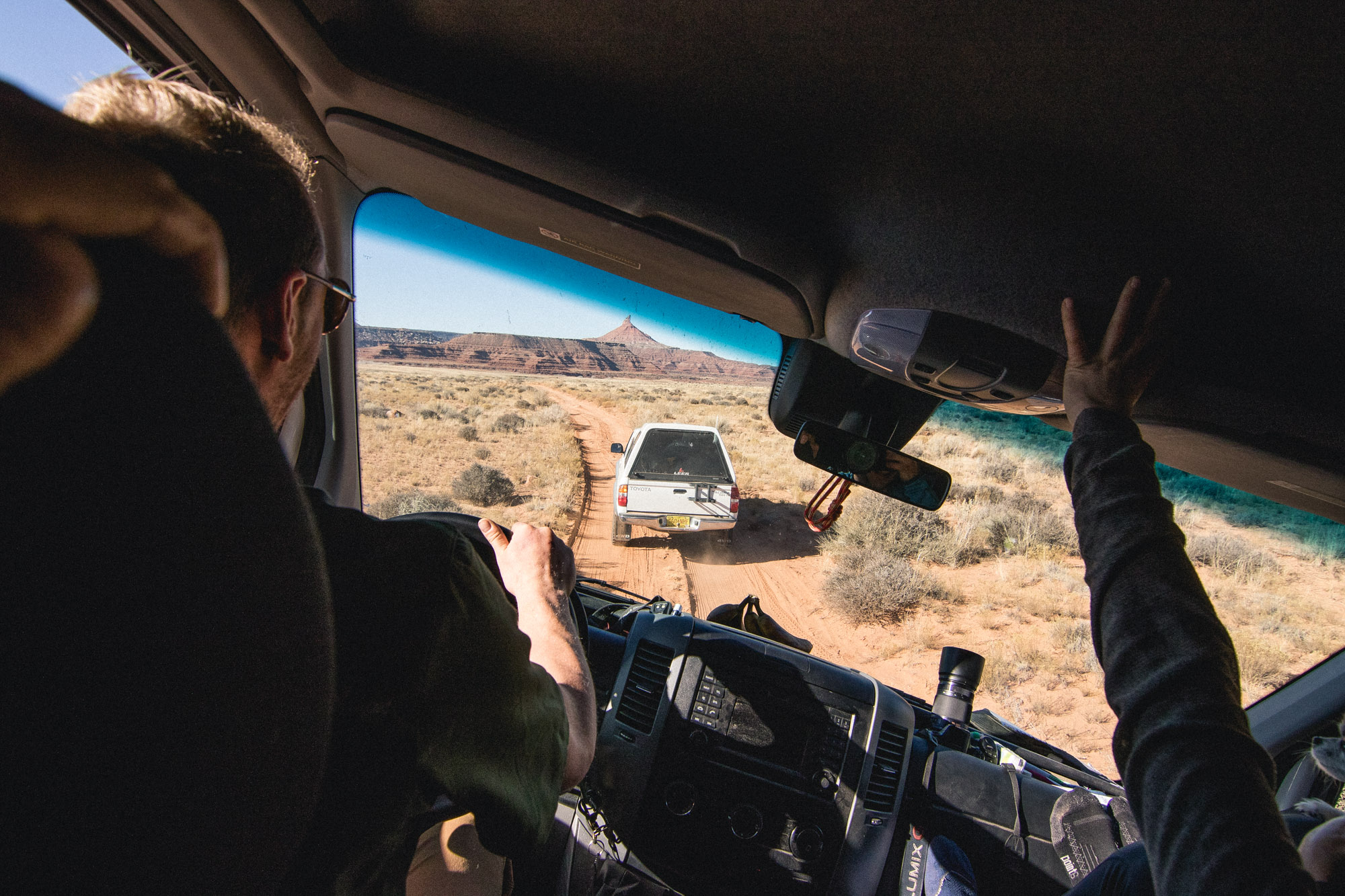 The Power Wall parking seemed far too packed as well, but the secret was that all those cars were heading to Scarface. At Powerwall there were only two other climbers. We spoke to them right away, letting them know that if we were on any route that they wanted at any point to just let us know and we'd get right off it for them.

Then the TRs went up. 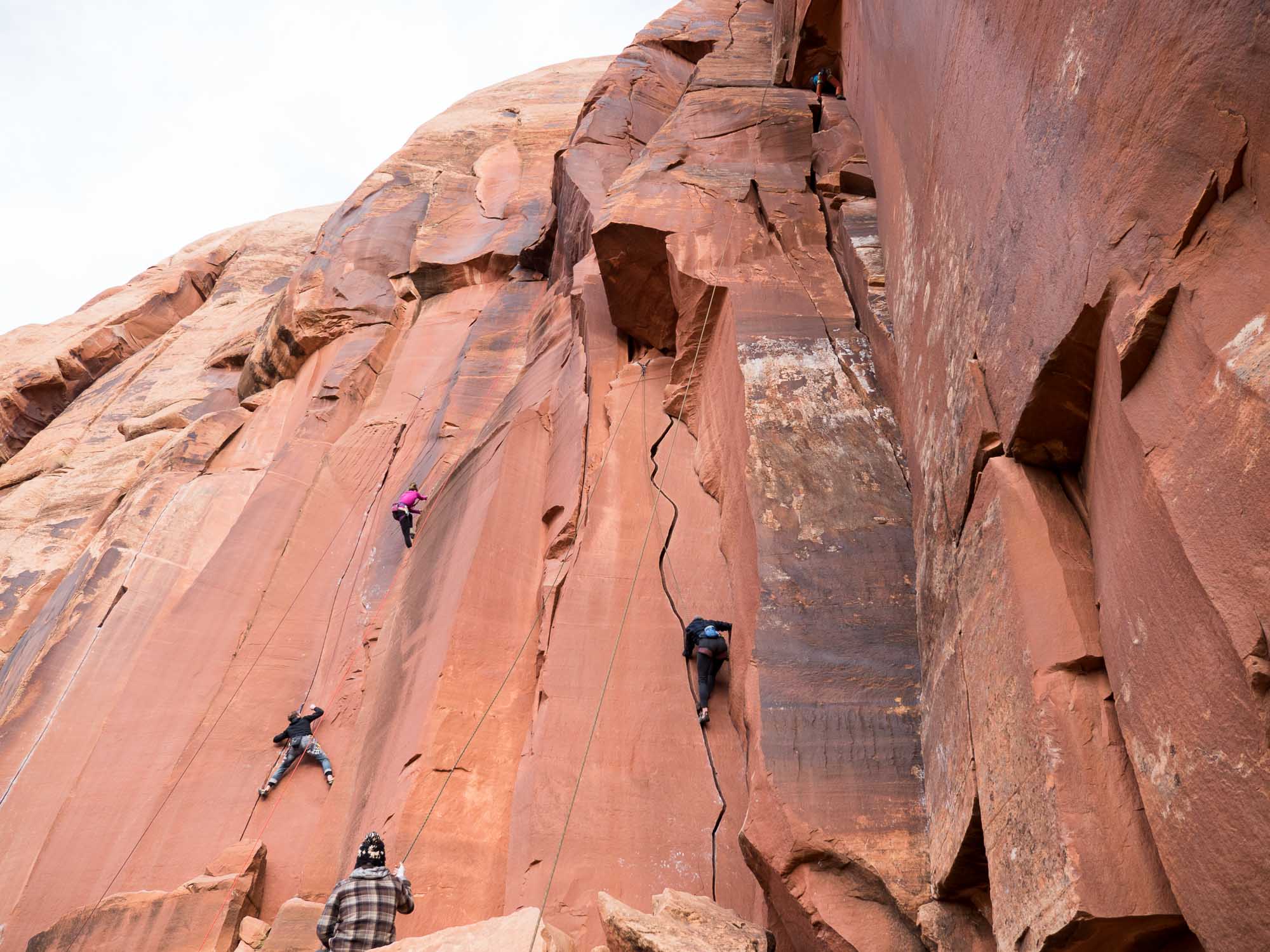 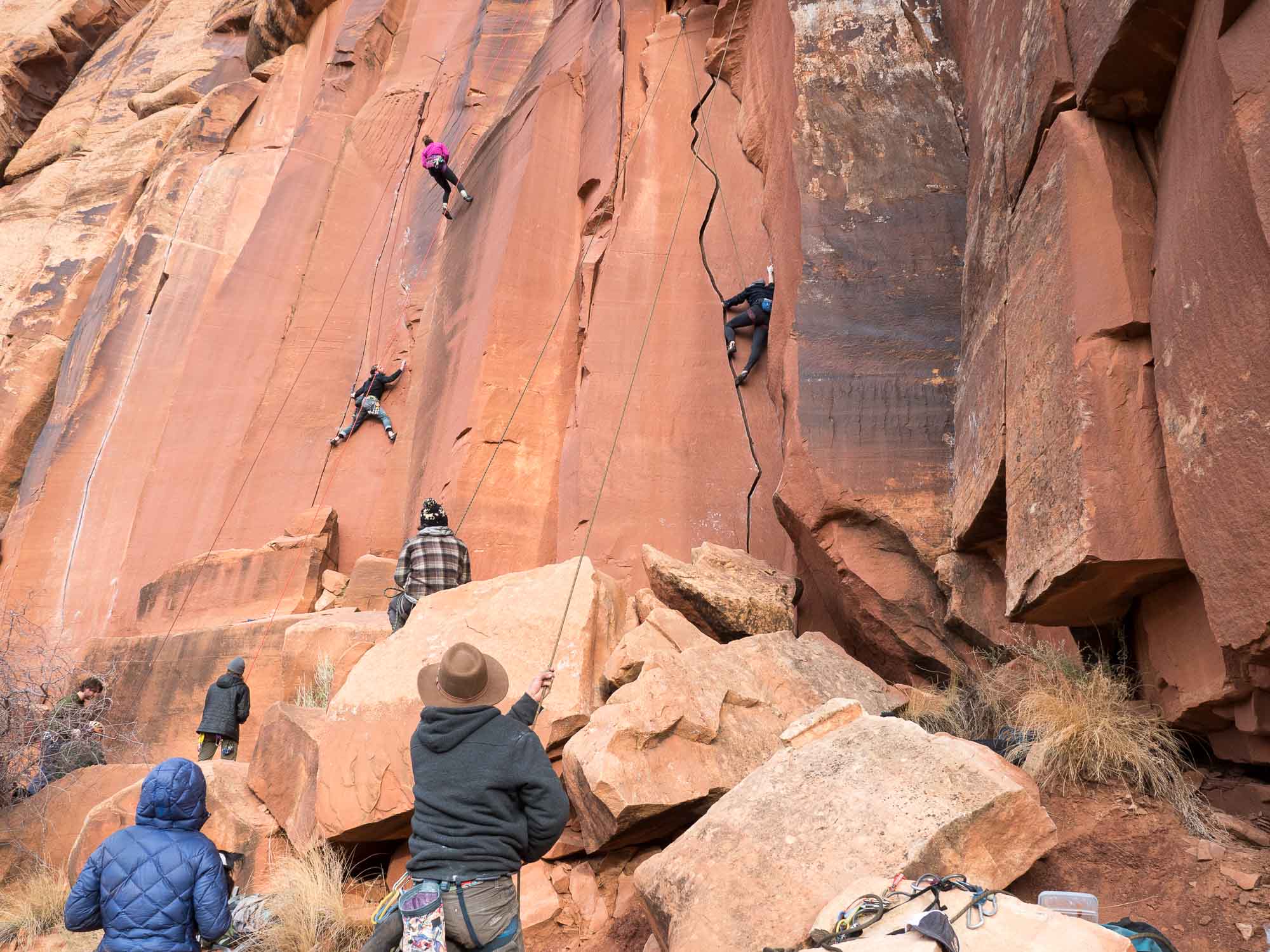 See? Four ropes. Also, my only photo of Steele. You can just see his helmet next to Rob in the bushes

Monsieur Reese was in good spirits. 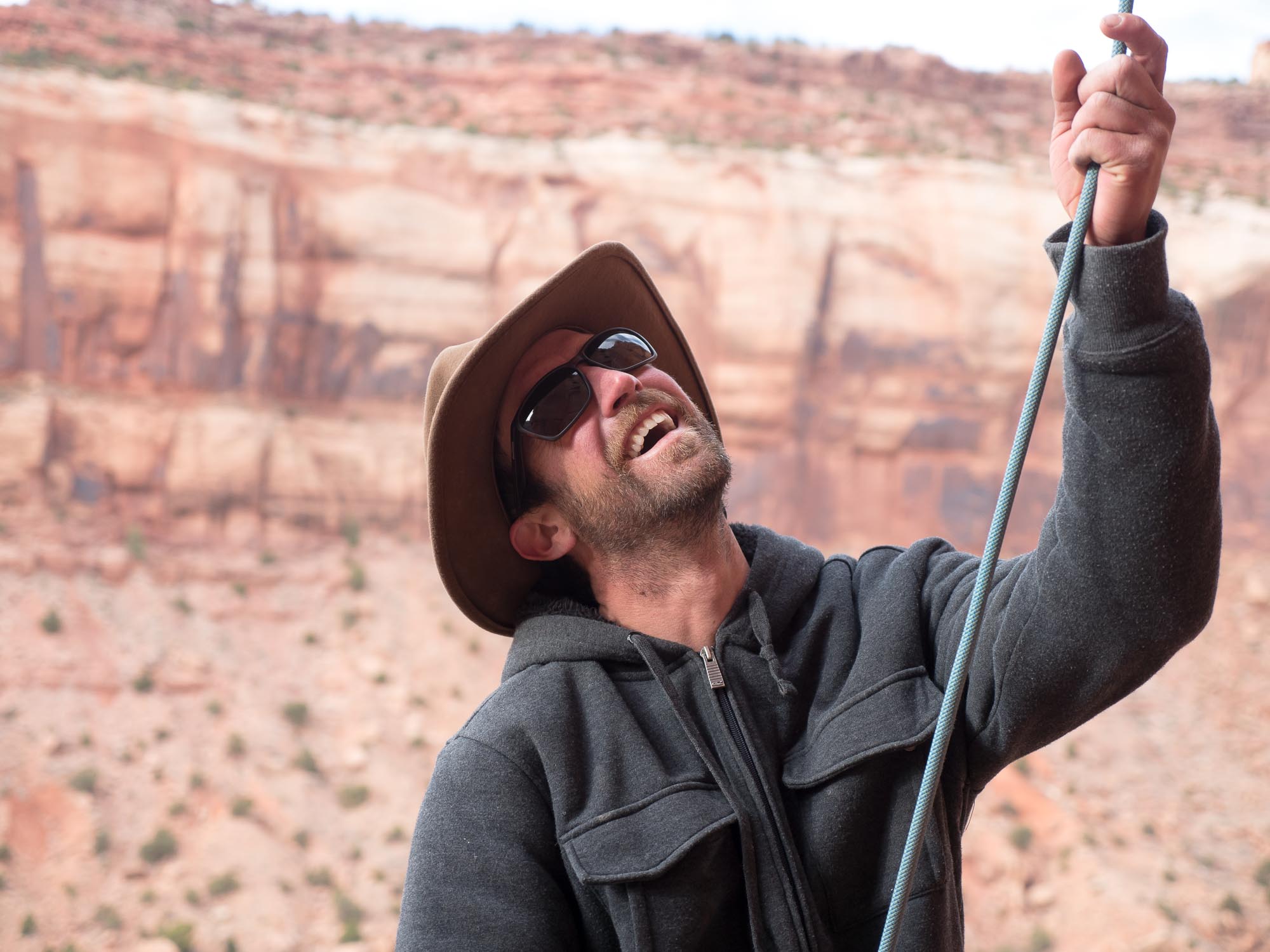 Actually, I'd say we all were. It was a really great day. 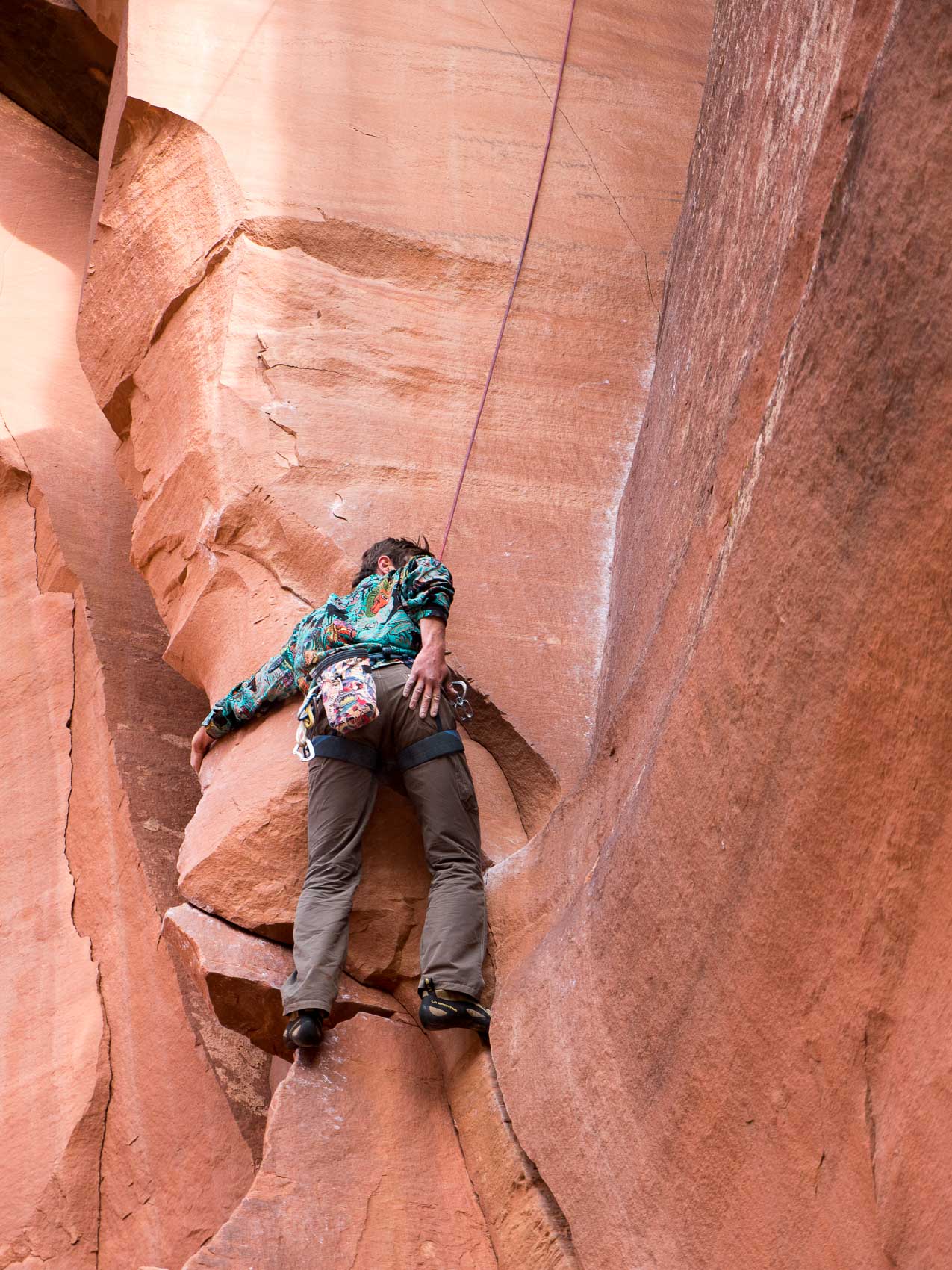 I felt like a princess when I jugged up Power Paws to shoot Robert on Power Play. Everyone kept asking me "should we move this out of the photo? Do you need that gone?" and Nate, belaying Rob, prompted me with things like "Just let me know where you want me to stand." 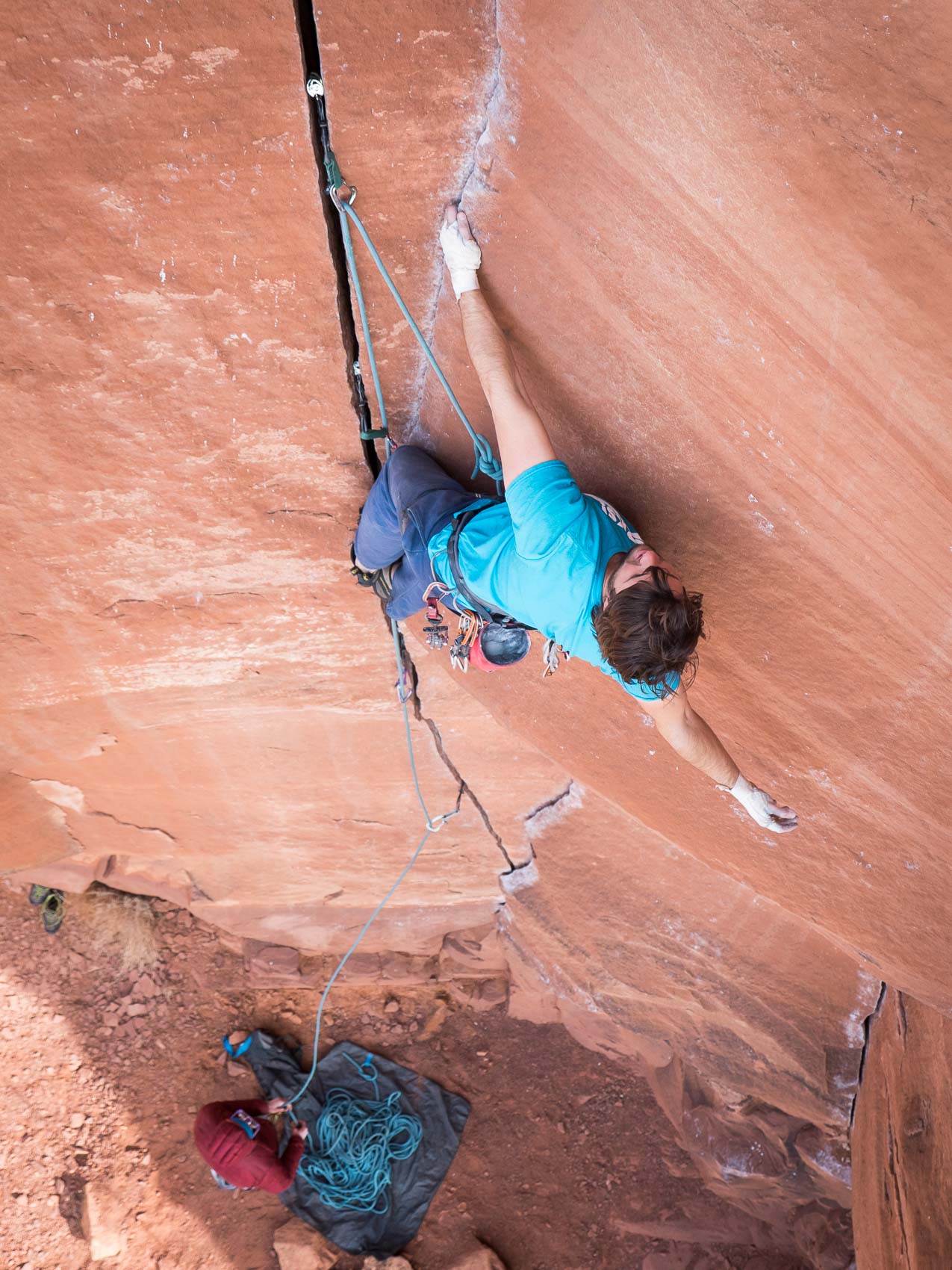 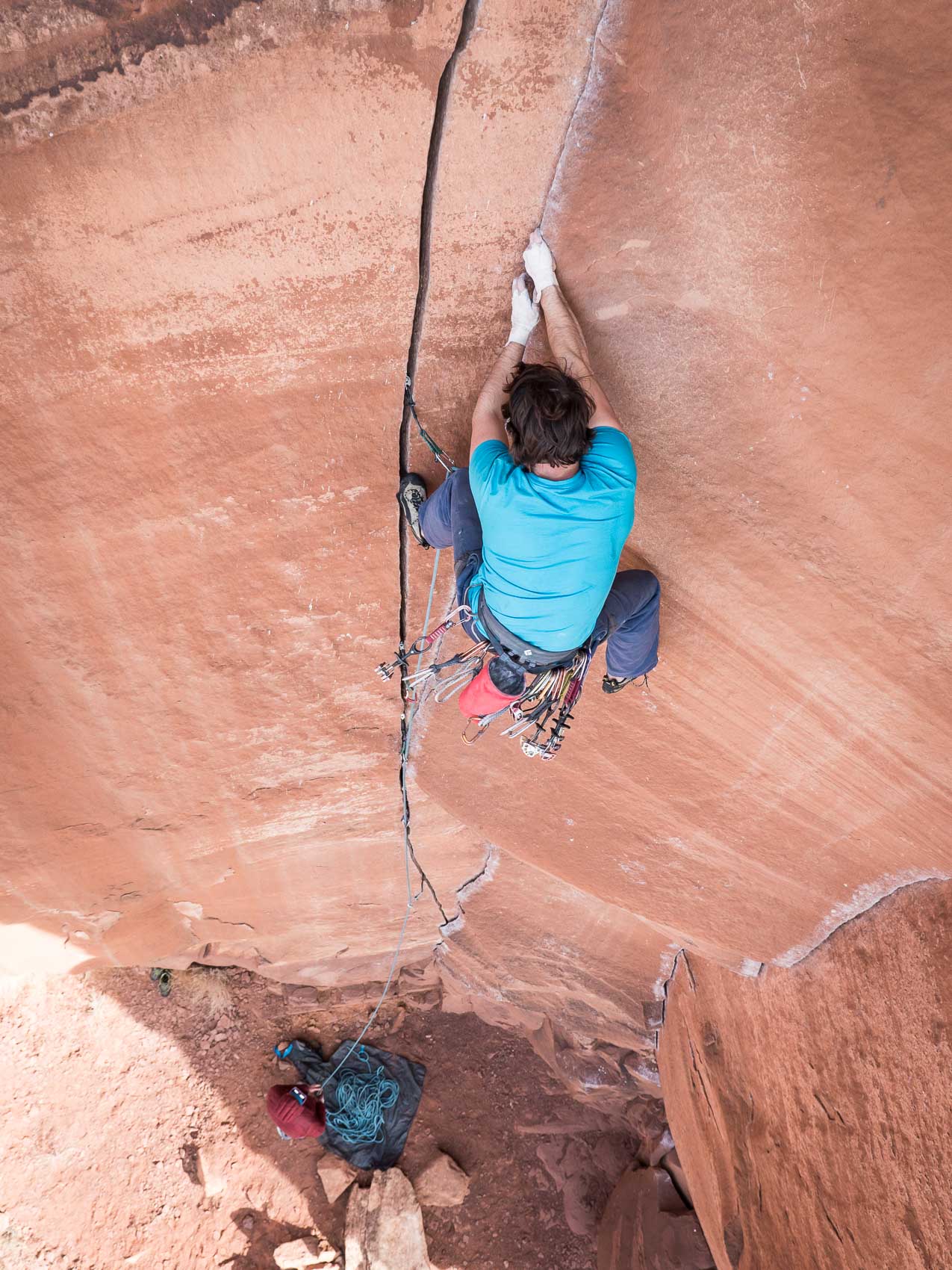 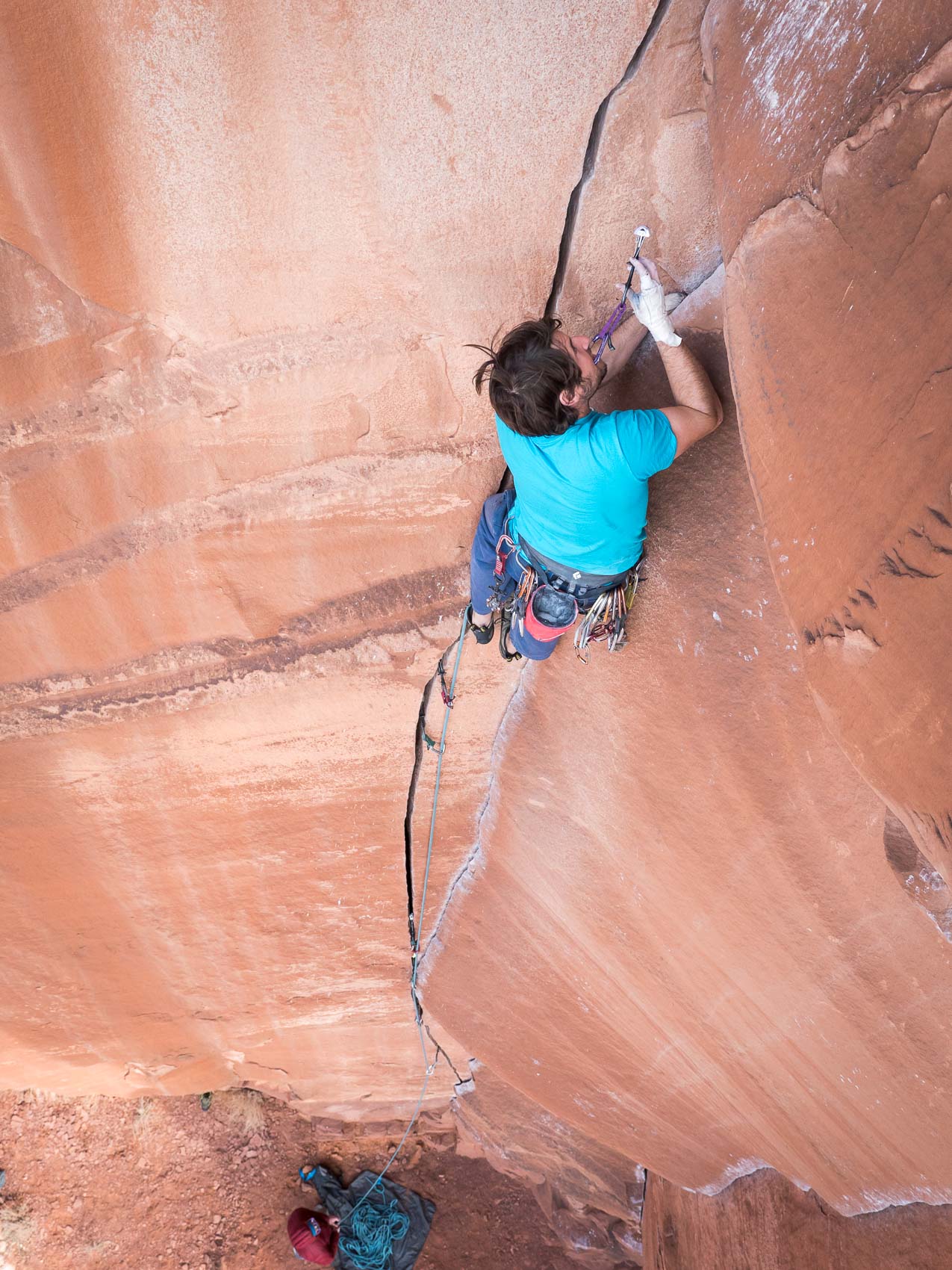 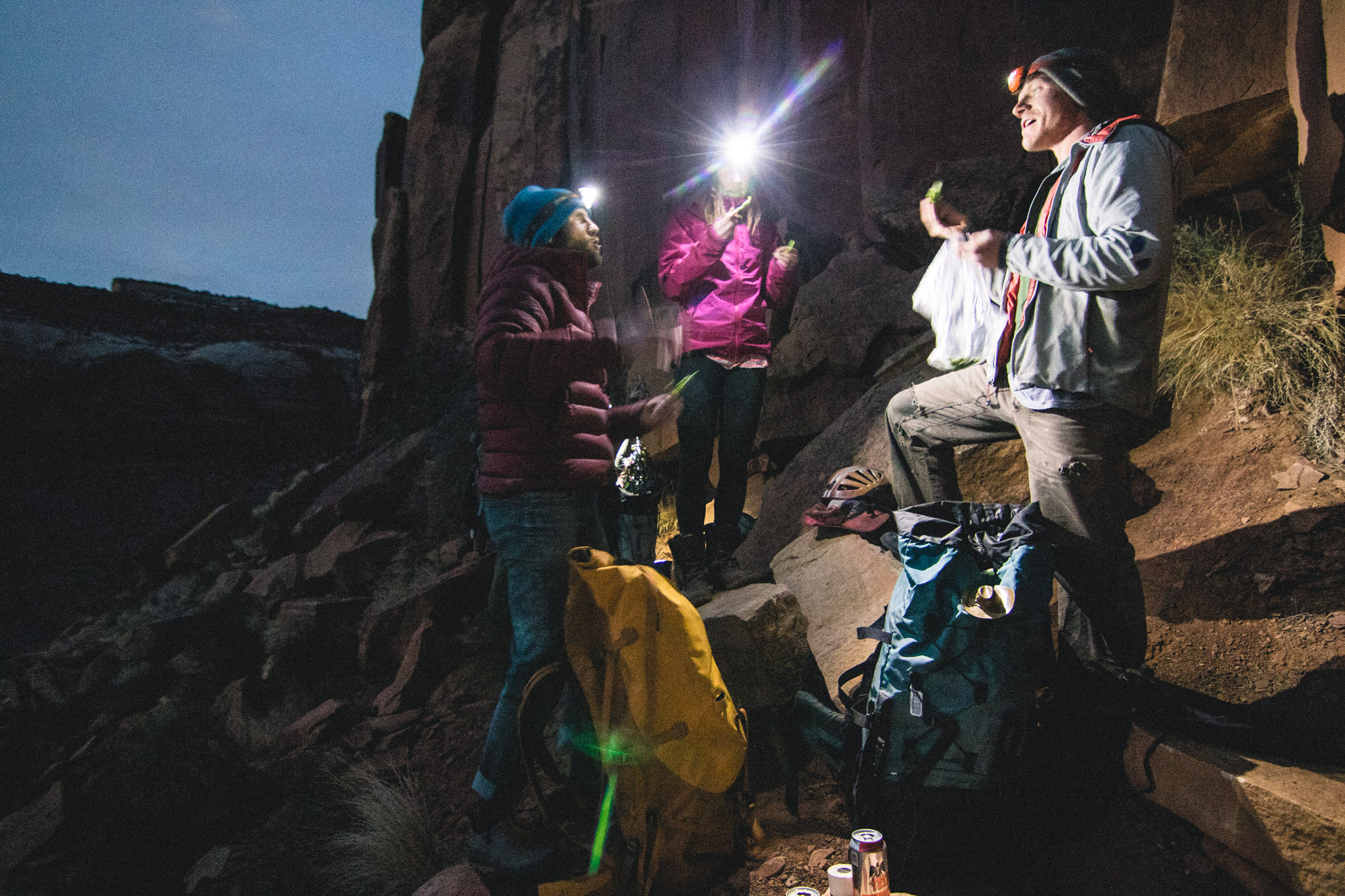 We enjoyed our hike out in the dark.