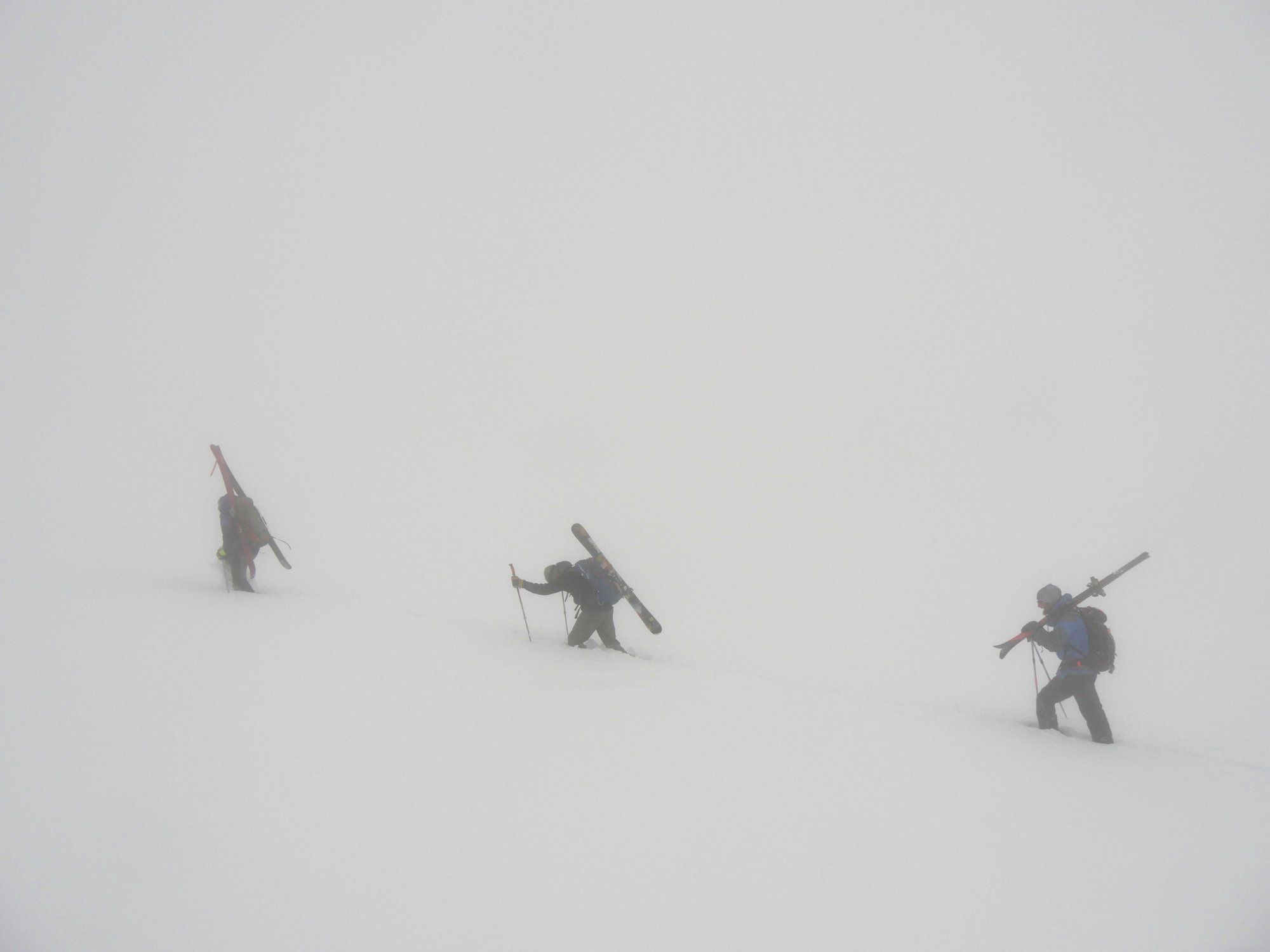 New Years happened, then I lost a week to a cold, got in an hour of skiing and a few hours of bouldering on the weekend, then went down for a second week with the flu. Mostly, it was very boring. My body ached to get out and get doing things again.

This last Saturday (15年1月17日), I made my comeback in West Mail Cabin with Chris.

We left the parking lot around 8:45 and were the first to put in tracks. I "broke trail" through the few inches of new powder all the way until we hit the actual up part of the track, where I yielded to Chris's youth and allowed myself a moment to huff and puff. This was definitely my first time out in awhile.

We got greedy and took the first line that looked good. It ended up only looking good. We skied down a hard, impenetrable crust with a dusting of heavy powder. I could hear Chris's edges scraping on every turn. My board helped me stay above it for the most part, but we both agreed we should look elsewhere for our next lap.

We took our skin track to the top the next time around, and tied in to tracks along the ridge up to the Do-Its. Then we Did-It, four more times (edit: reading this after I've published it, that sentence sounds much dirtier than I intended.). The aspect change made a huge impact on the skiing quality, and we had a hard time stopping. 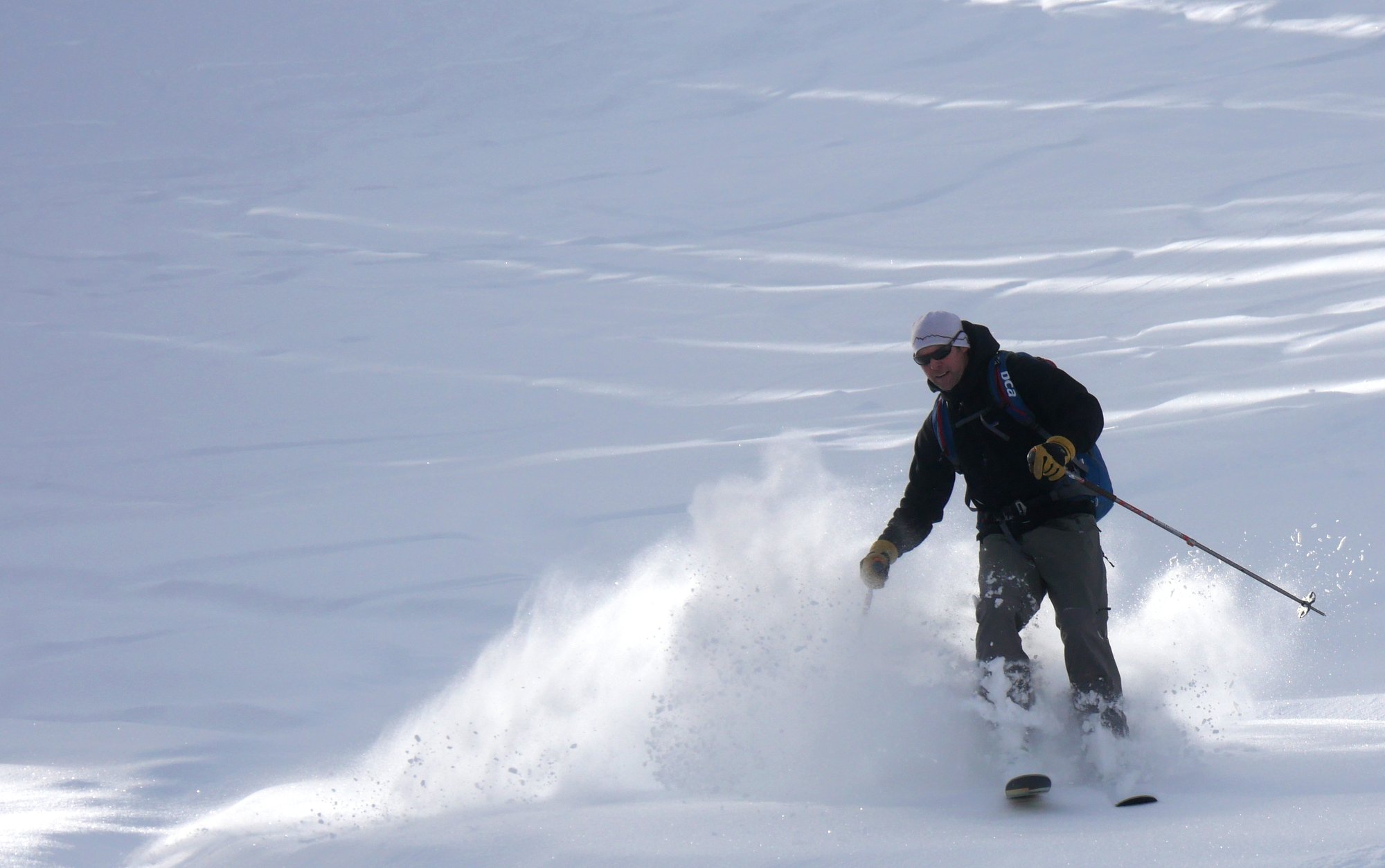 By our last lap my body had pretty well gotten back into the rhythm of things. A large group (with about half splitboarders) ahead of us on the skintrack helped me tap my last reserves, setting a lung-burning pace towards the peak. Passing them, I think I heard Chris say "Thank you son" to one of the snowboarders who had stepped aside to let us by. He loves making sure kids realize they're being passed by a guy twice their age.

After a short pause, Chris replied, "Yeah, we know, this is our fifth lap," in his most charming Chris voice. "Thank you for your insight." I could hardly keep myself from bursting out laughing as I started my run down. Chris's reactions to other skiers are just too good. 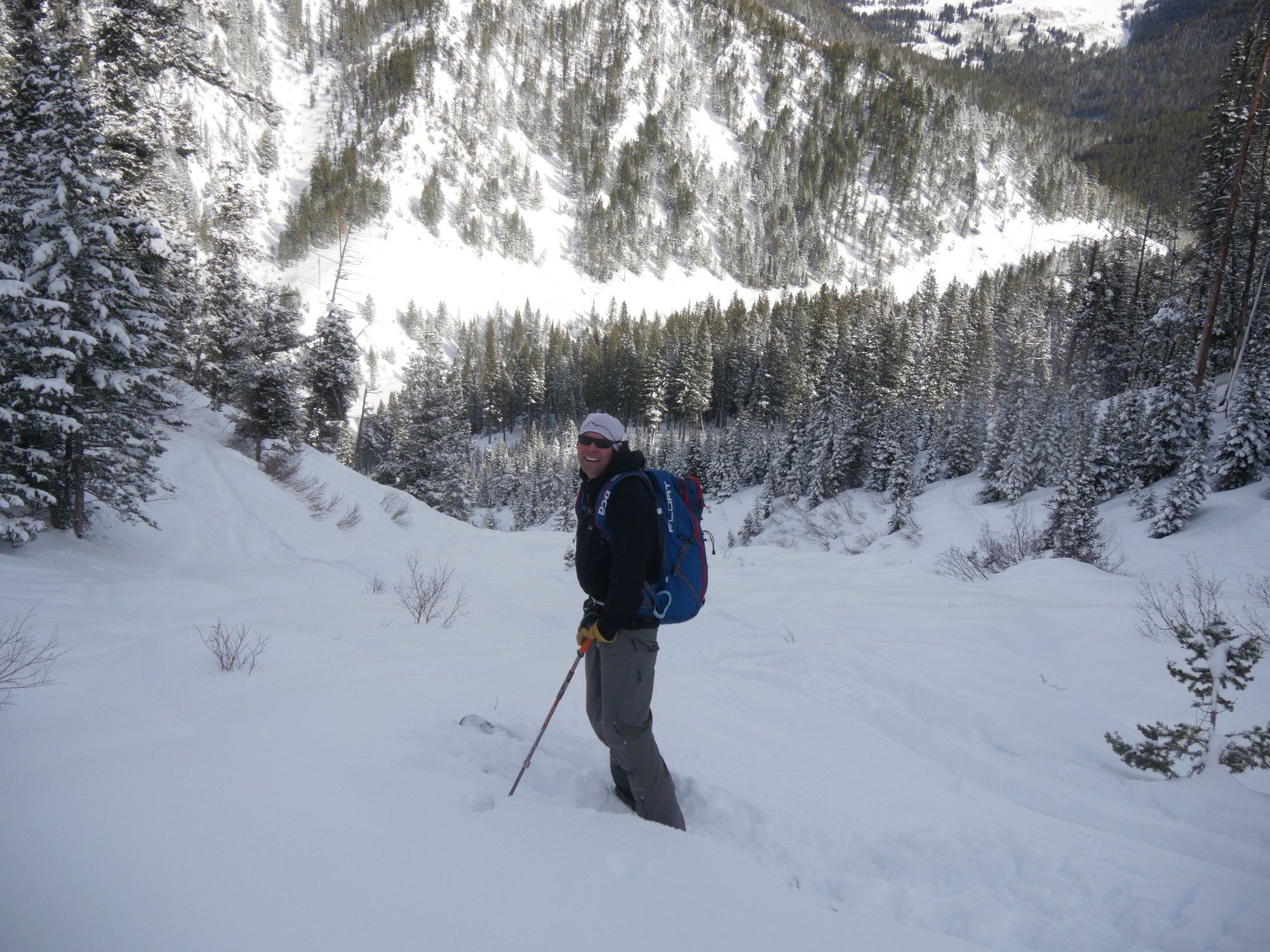 The exit was pretty ideal - ride to the highway, throw your board over your shoulder, and walk back to the car.

We then went back to Victor, had a few beers at Grand Teton, checked out the new climbing gym (!) and went back to Chris's place where we prepared for a Sunday excursion (ie, ate and drank more.. and slept).

I had missed a scheduled expedition to Red Peak with Jake Ostlind the previous week due to the onset of my flu. When we saw each other at a potluck on Friday night, we agreed to keep in touch about fun things for Sunday. He and his friend Matt Stech had a few ideas floating around, and after I killed one or two we agreed to do some lines North off of Glory.

In order to secure our parking spots we started the day a bit earlier, meeting at the top of Teton Pass at 7:30. Trudeau and I arrived just a bit behind schedule thanks to rain and ice down in the valley. The weather driving in had us worried about snowpack and fun, but conditions ended up being more than good.

I started the bootpack up Glory at a somewhat punishing pace. I think it was a combination of proving to myself that I was back to being healthy, habits ingrained from chasing Jeremy up so many times (he clocked 36' on the up the last time he was out), and having Jake behind me. One day I hope to go fast enough that he doesn't want to keep up, but I don't think that will ever happen.

When Jake swapped lead with me, he kept the speed he'd been going all morning. About three-quarters of the way up, Matt called us out on the pace (and more importantly, that this wasn't going to be a one-and-done sort of day) and we eased up.

At the top the skiers and I attached our skis (mine with skins). We traversed North along Glory's ridge, and it wasn't long until we hit whiteout conditions and the skiers simultaneously had to return to bootpacking. 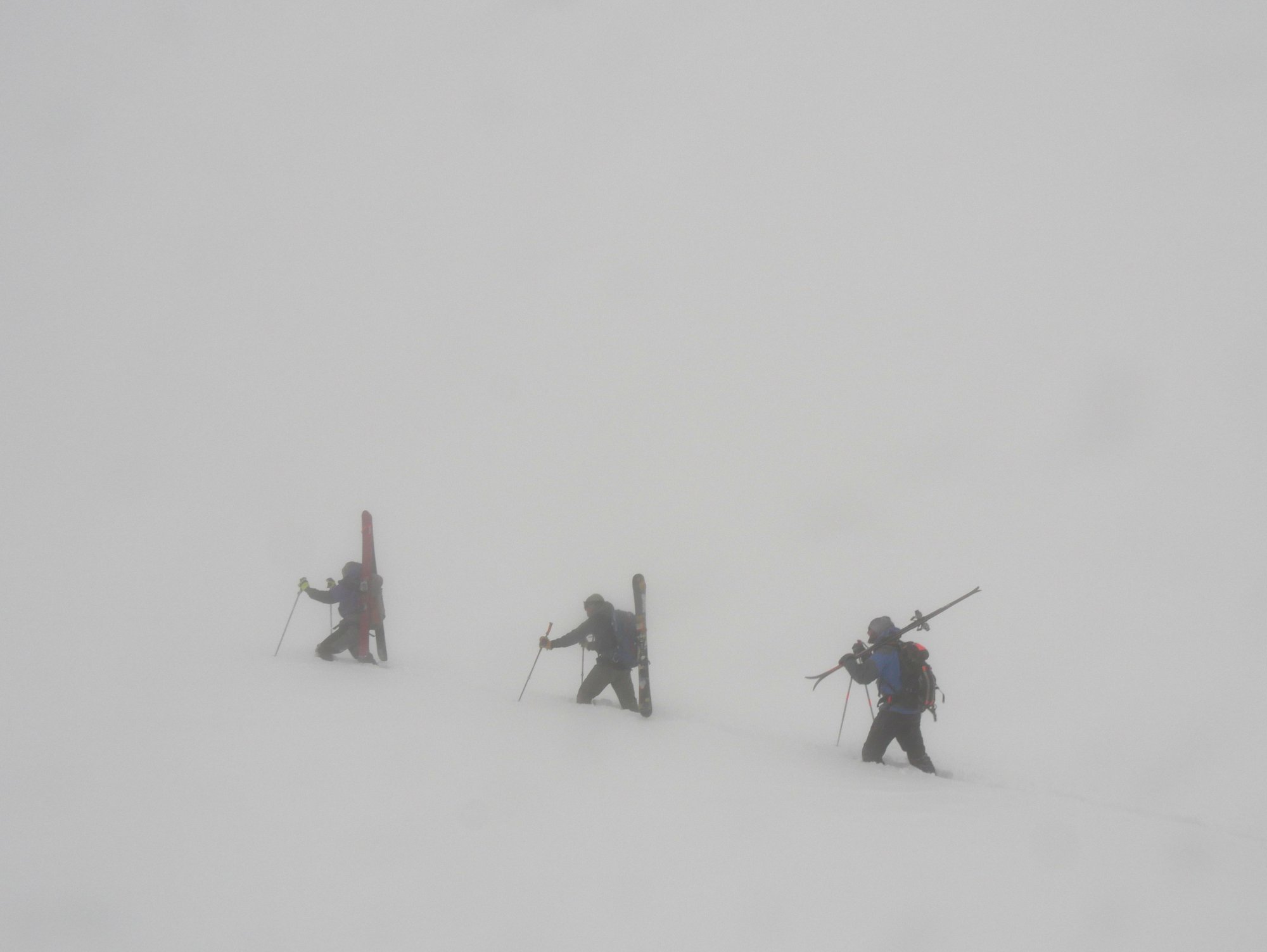 Jake's wayfinding was impeccable, and as he pointed the way I giggled at finally being faster than skiers, jumping ahead to snap photos of the hikers as they trudged through the snow, fresh flakes falling and blowing around us. 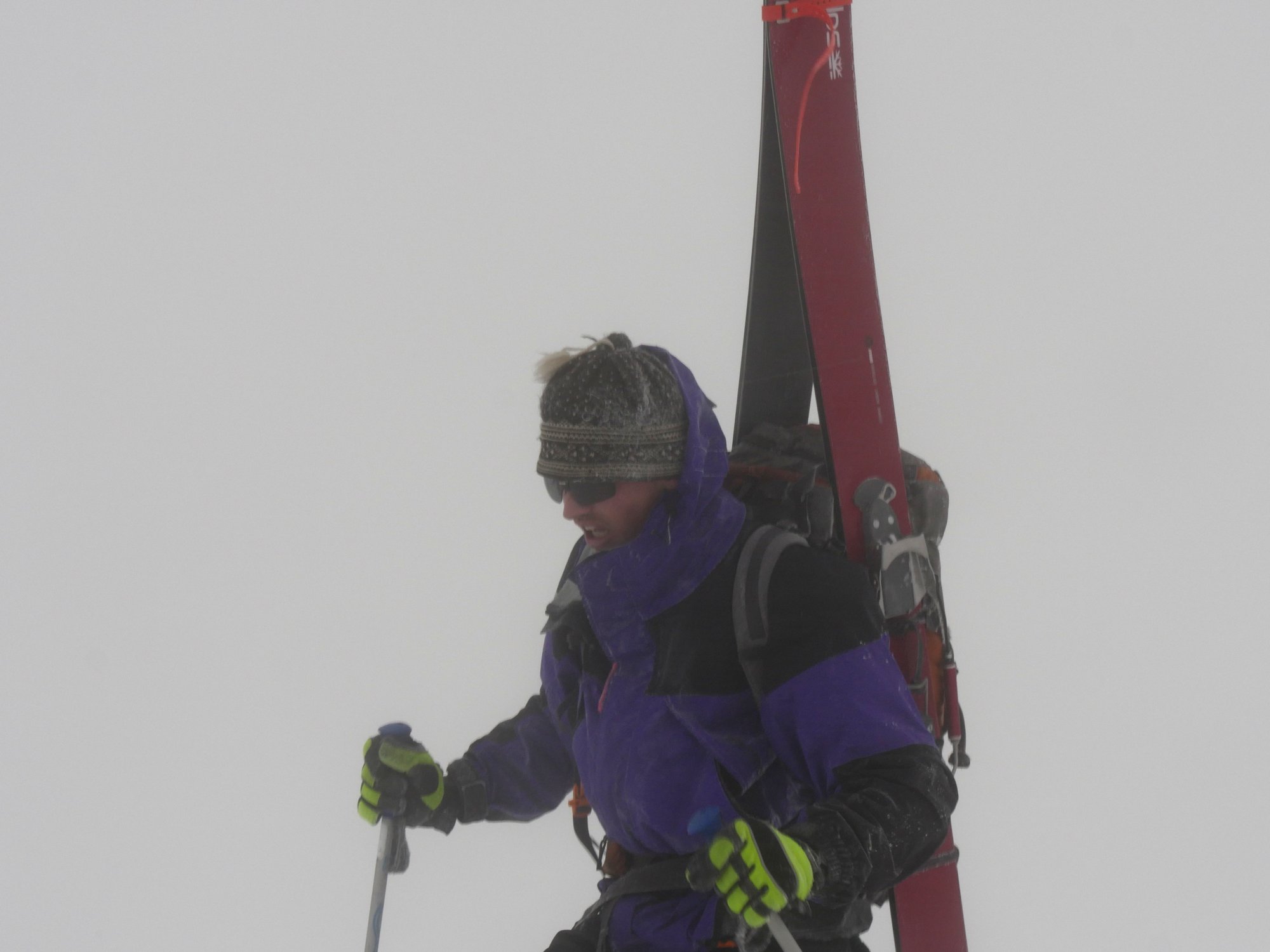 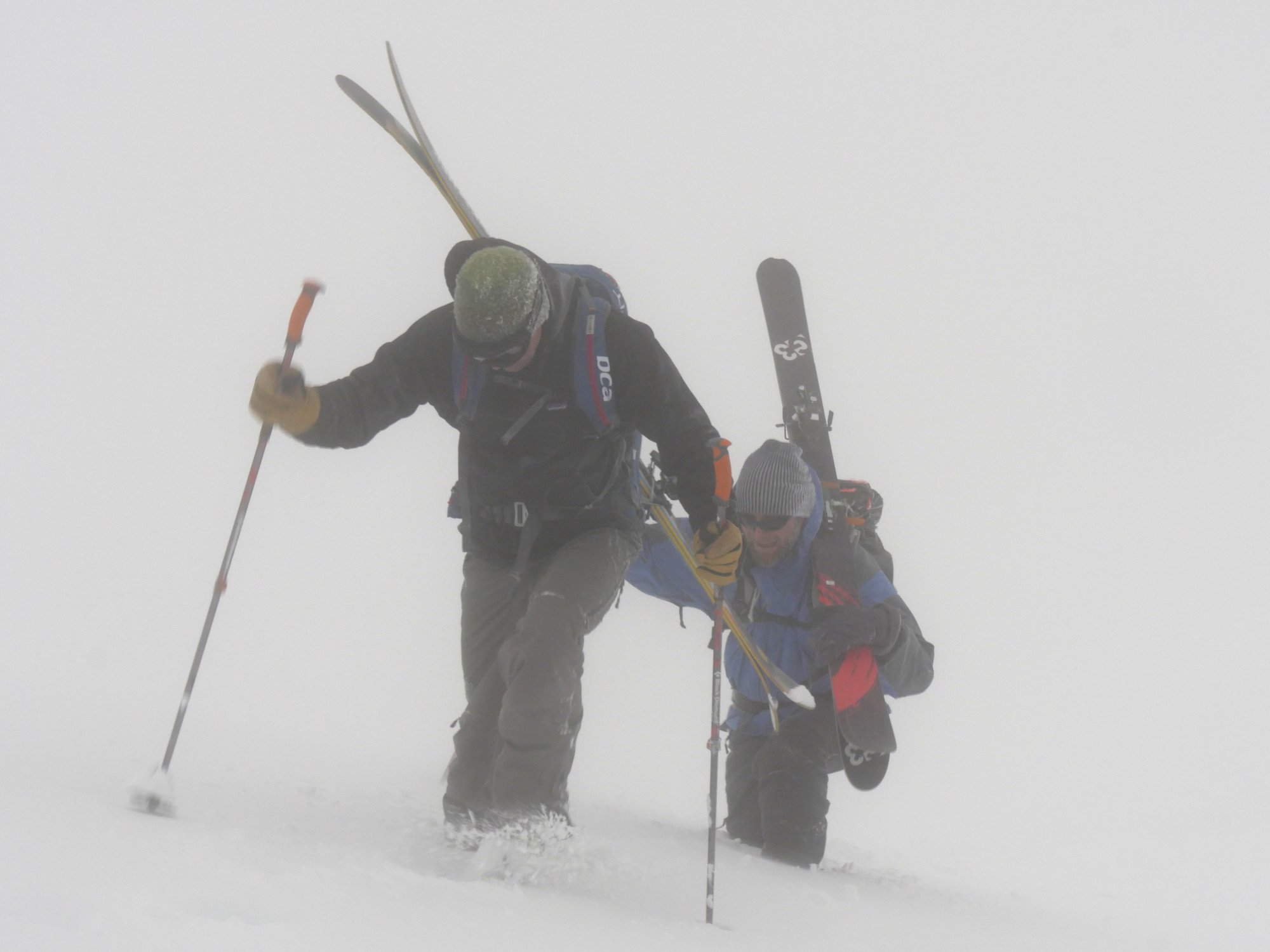 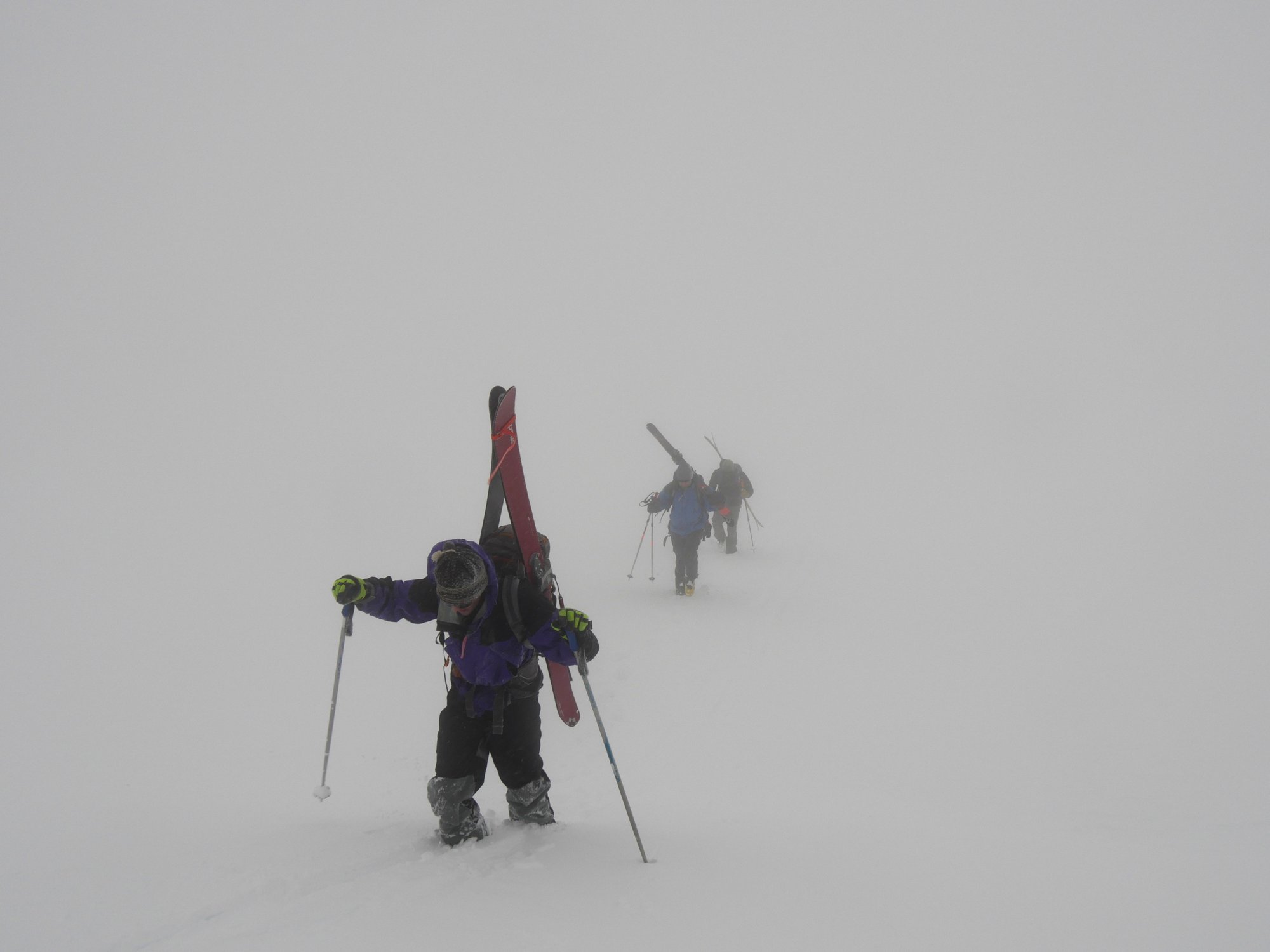 We skied down somewhere north of Un-ski-a-bowl, a fun line through trees. On our traverse over I had been talking of how I dreamt of becoming a skier to enhance my backcountry experience, but that run reminded me that snowboards have their perks too. For me, the run was amazing, the snow perfect. I was surprised to hear the skiers saying less-than-positive things about it. I guess my board let me just float over the nasties. 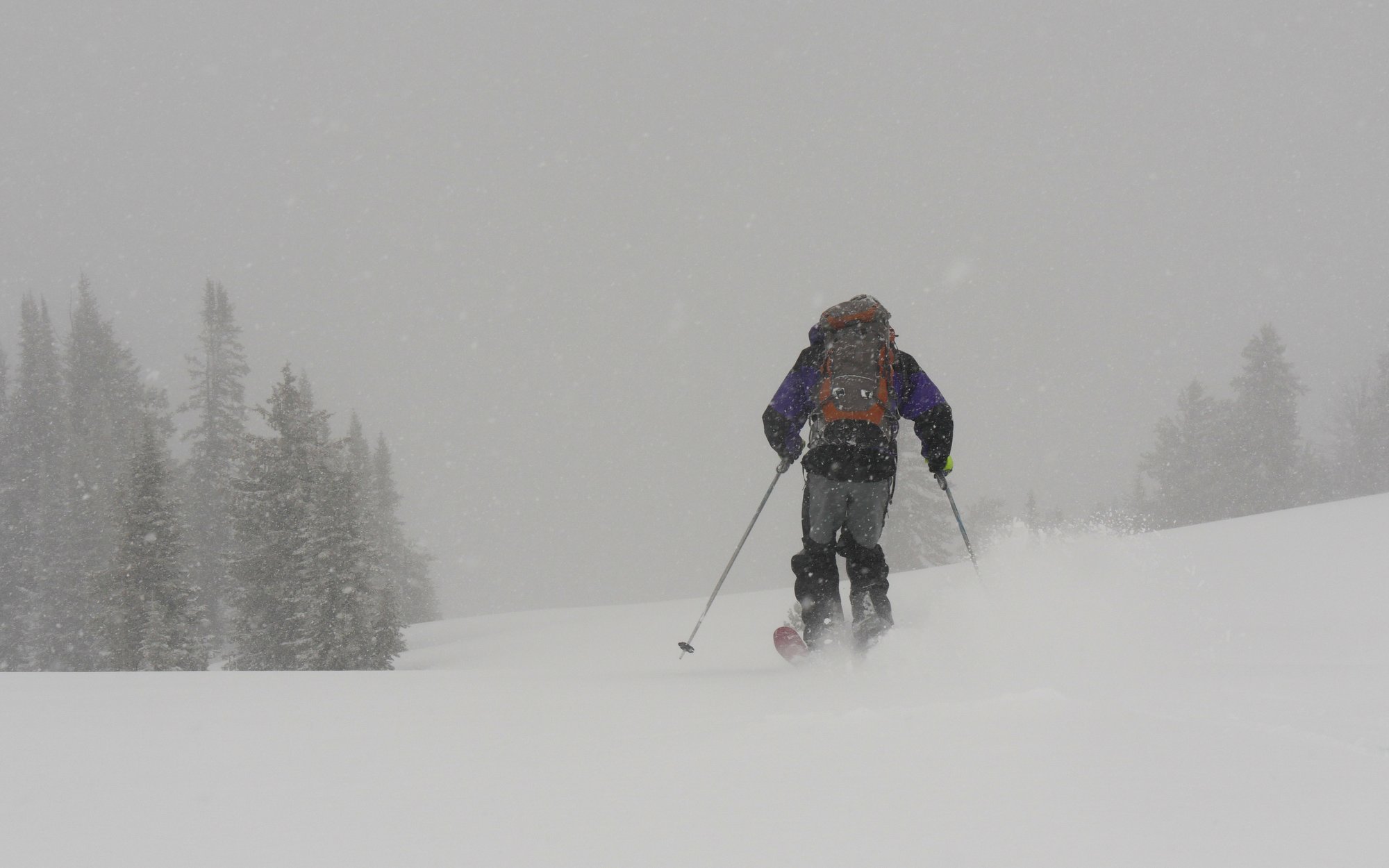 From there, we kept heading East, skinning up another ridge and then down the Whale's Tail. What a fantastic line! It was steep, steep enough that we all pushed slough slides down the narrow sections. And it was good, good enough that we did it twice. 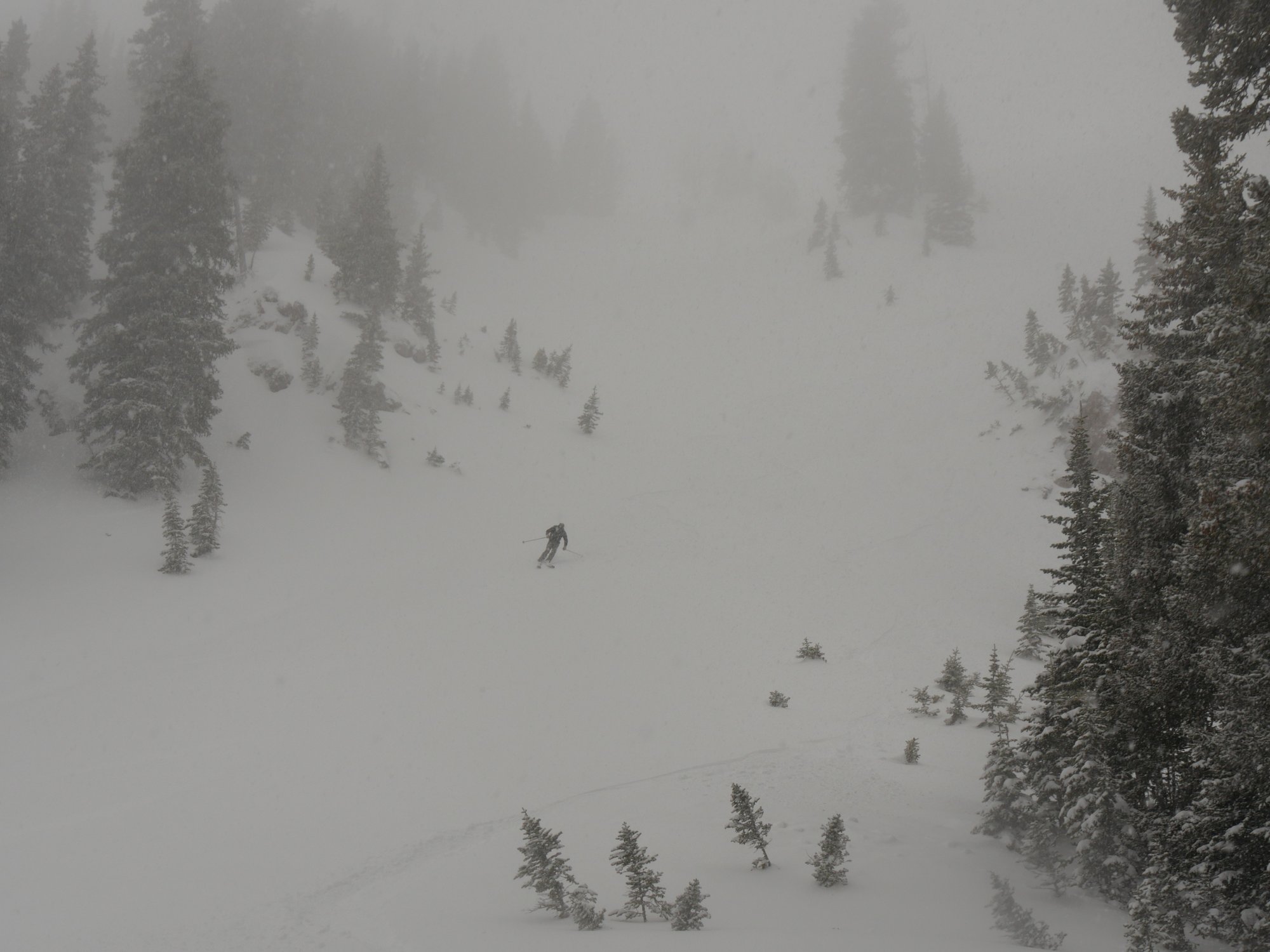 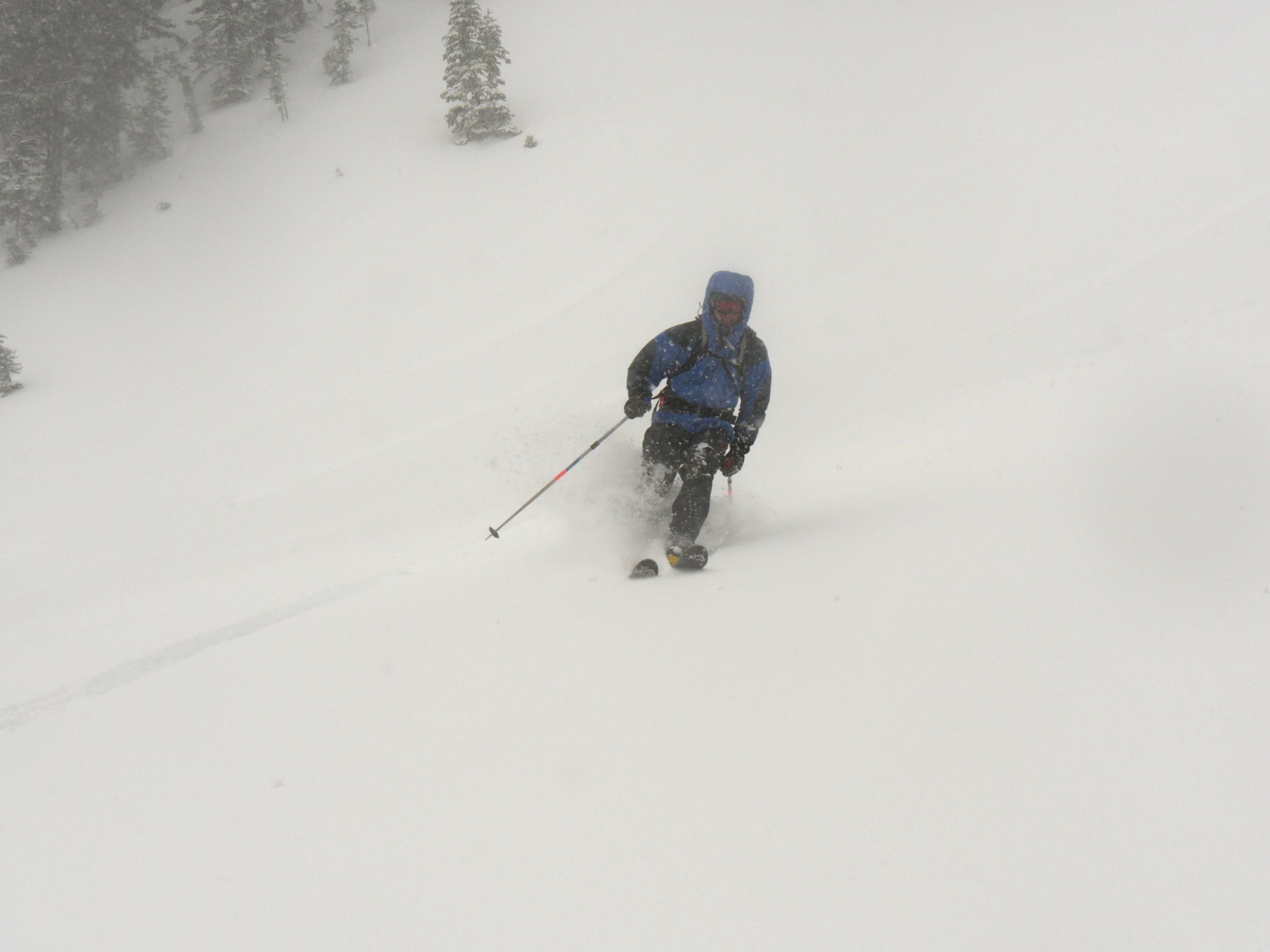 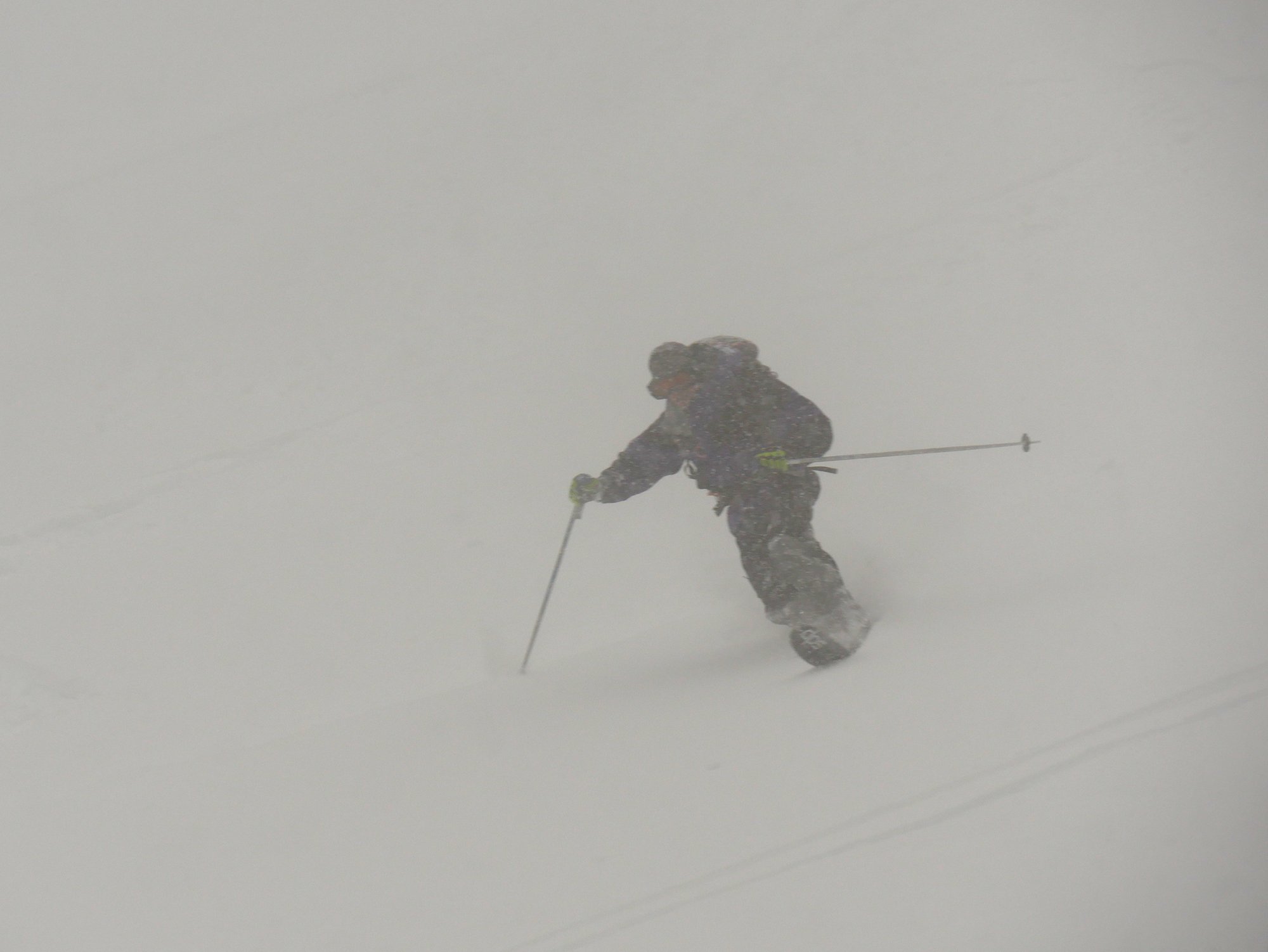 I have been missing the wilderness feeling of BC skiing - Teton Pass doesn't quite carry it, typically - that's such an integral part of the experience for me. Hidden so far North in a whiteout, though, I could feel the adventure. Thanks Jake, Matt, and Chris for being such fun partners, and especially thanks to Jake and Matt for guiding us through new terrain.