Living in Lander, with the Winds so near, I was convinced this would be the year of alpine climbing. I just needed to find myself a Yoda who would show me the ropes, so to speak, and then I'd be one step closer to winning the Most Outdoorsy Nerd award.

That was my plan, but shit happens and then I moved. Moved to a place with mountains even closer at hand, that is. Best of all, I'm living with a guy (also named Matt) who was a Cascades mountain guide in a former life, and has a story or ten he'll tell you about the Himalayas.

On a Wedneday, my phone rumbled cheerfully, and set its blue light blinking.

Climbing in the park tomorrow? -Matt

That's not something you say no to. 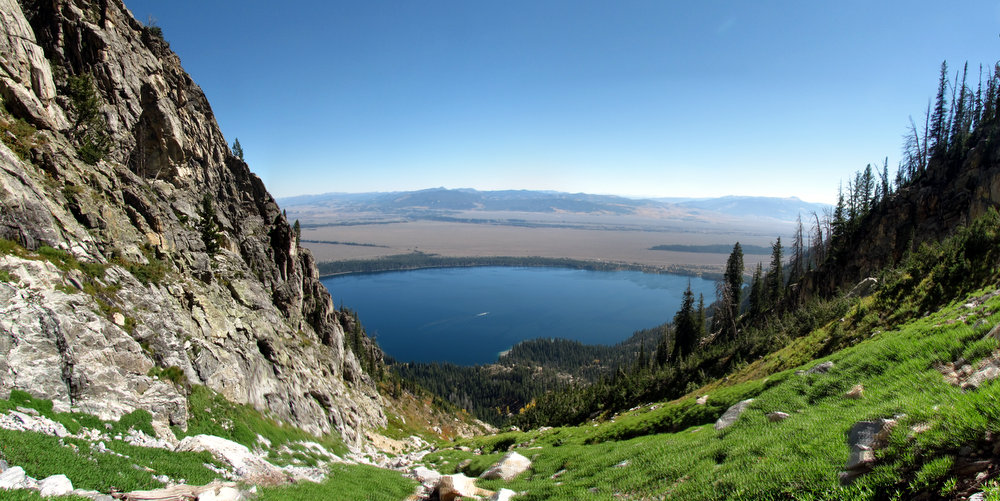 I ate a hearty breakfast and kickstarted things with a cup of joe; Matt rolled over.

I got out my book and read a few chapters; Matt got out of bed. Yes!

We started late enough in the day that we decided to just push back our real start until 10AM, when the ferry across Jenny Lake started running. We caught the first ferry, and as I passed my card across the counter, I suavely asked, "Can we get the local climber-bum discount?"

The woman behind the register eyed me and Matt, and asked "You mean like the Exum Guide discount?"

So we did! It pays to ask, and to have a climbing partner who looks like a wizened mountain guide.

The horse trail leading up to Symmetry Spire, our climb, turned out to be closed, so we had to take an alternative trail that added a mile or two to our journey. No biggy. After that, we set off on the climber's trail.

It wasn't the climbers trail.

At least it was pretty though, with the Tetons debuting their Fall colors. 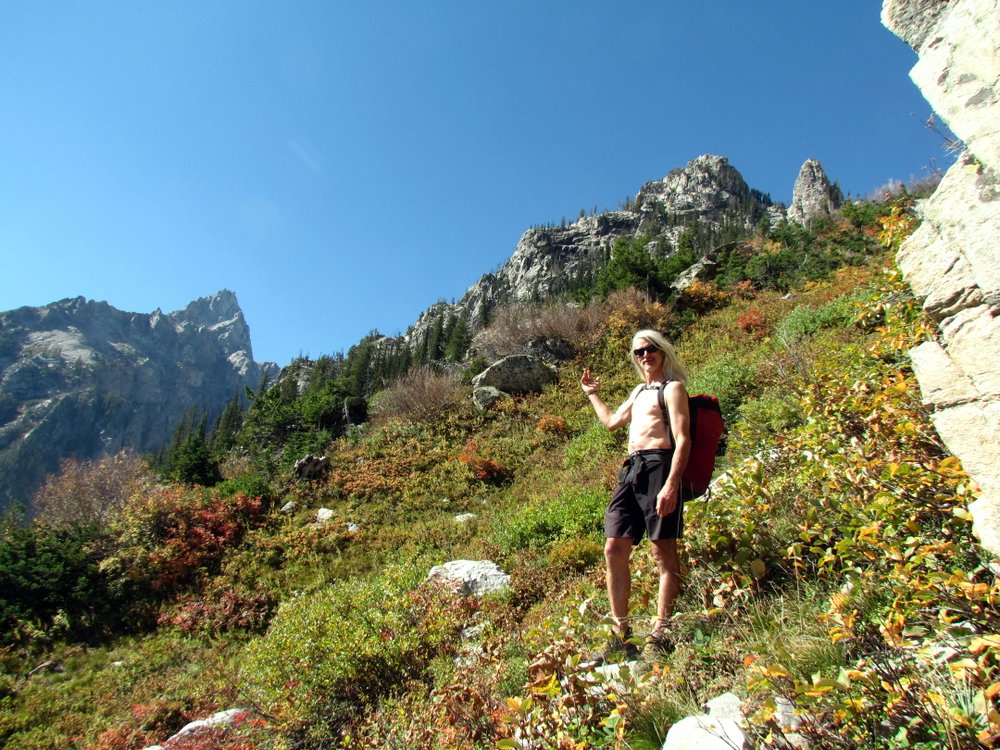 Halfway up, we filled our bottles from a fresh stream running off a year-long snowfield. 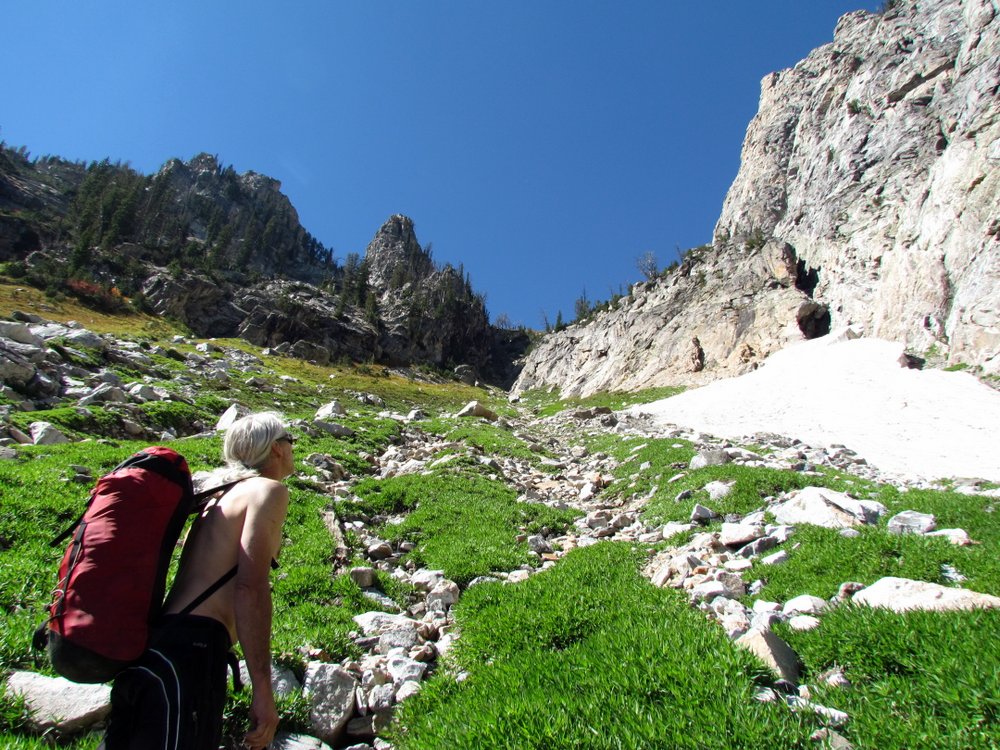 Three hours of ferry-riding, bushwhacking, sidehilling, downclimbing, snow-stream drinking, and class four scrambling got us to the base of our route.

Since we had a later start, and were off trail for much of our approach, we were feeling the time crunch. The last thing we wanted was to have to downclimb in the dark. So, Matt started sprinting up the rock, leading 60m pitches with maybe two pieces of gear at a time. 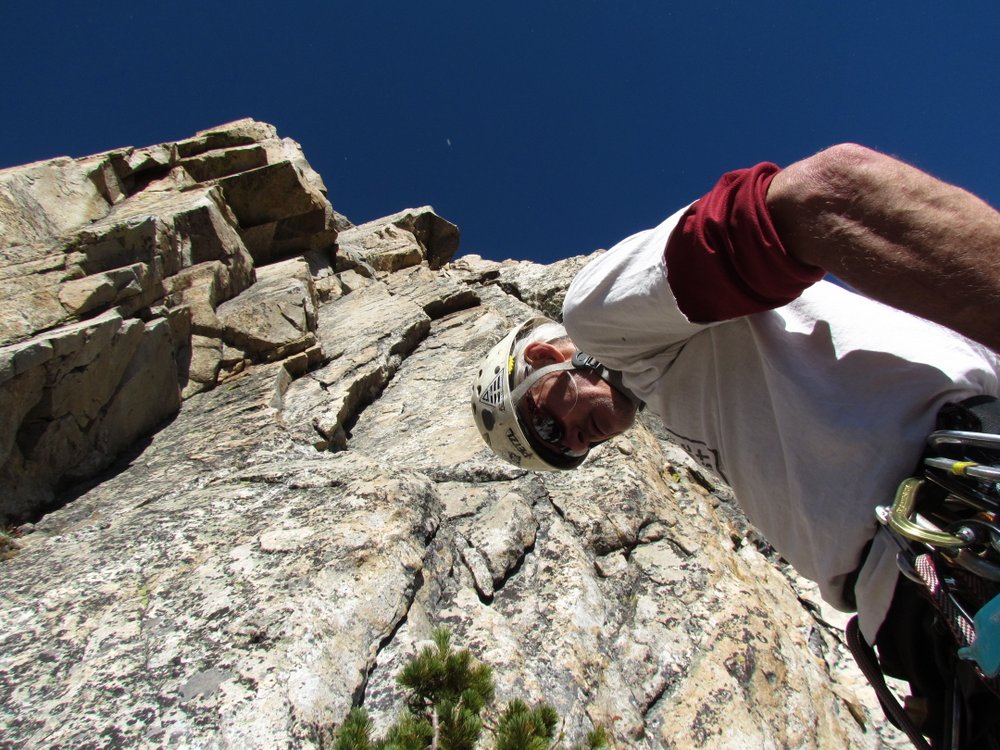 I don't know that I've ever had a better day in my life. The climb was consistent and amazing, and the views, well. You don't need to ask, do you?

Matt and I both climbed in our approach shoes. He lead all the pitches, I brought up a bag with food, camera, climbing shoes in case this "approach shoes are cool" thing turned out to bite us in the ass, and the guidebook to help us stay on route. 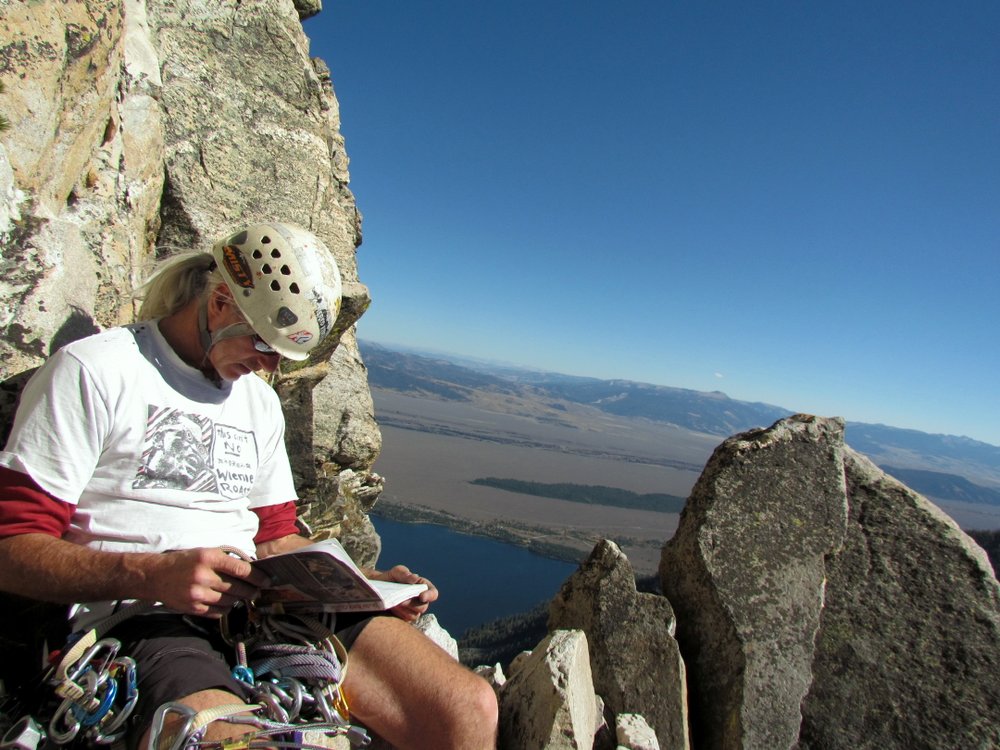 The first pitch went quickly, and the second was an outrageously fun romp through corners and cracks and easy roofs, with a bit of face climbing thrown in for fun. The rock was super, high quality granite so nice it would probably buy you dinner Sunday night. The third pitch ended on a generously large, flat slab. 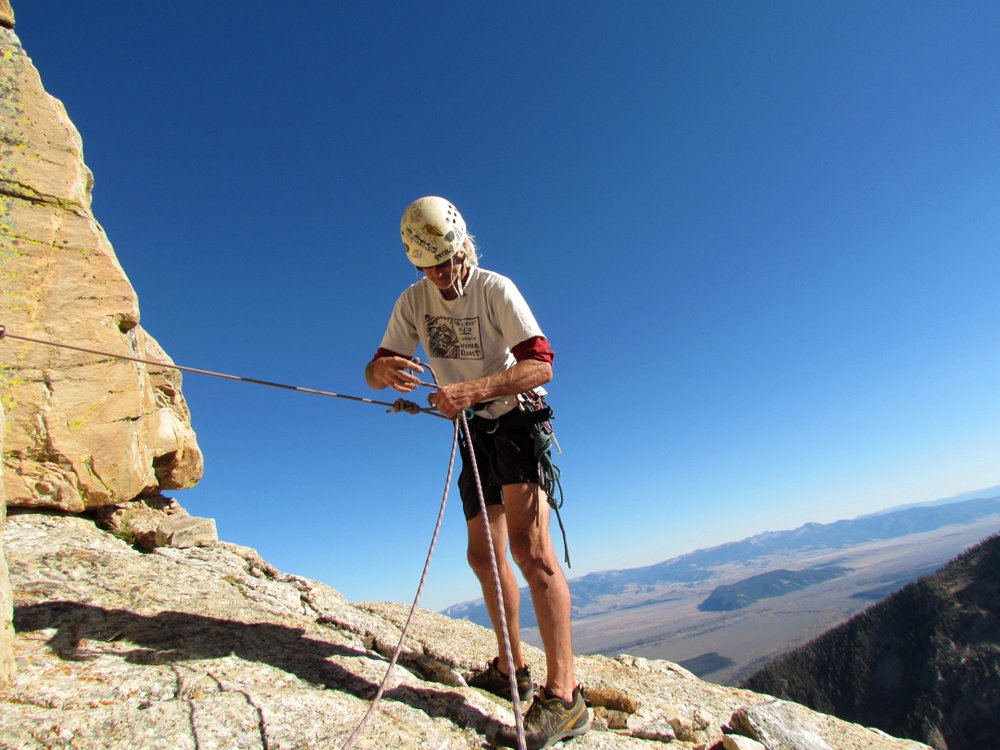 On the fourth pitch, things went a bit awry. Matt had put out another full-rope-length pitch, and I was waiting for him to take tension on the rope and let me know I was on belay. His shout echoed off the mountains and was distorted by the wind, but I heard his voice, if not its content.

Assuming I was on belay, I moved towards the climb, and paused before properly heading up as I had some ten feet of slack sitting with me.

What ensued from there was a series of unintelligible yelling back and forth between Matt and I as we tried to get our voices to cut through the wind. I believe, in hindsight, that the gist of the "conversation" was something like this.

and on, and on. Honestly, we couldn't make out anything the other was saying. Eventually, I realized that only one thing could explain us wasting time like this: he was convinced he was belaying me, and I could clearly tell he was not. The rope was snagged.

And so, saying nice things to myself in my head, I started the climb, with a nice splat to look forward to if something went amiss. I soloed forty feet up the wall, and pulled the rope out of a notch it had gotten caught in. There I stayed as Matt reeled in all the rope I'd left behind. That pitch felt much better from there, excepting one heady move of stepping off a cliff, but hey. 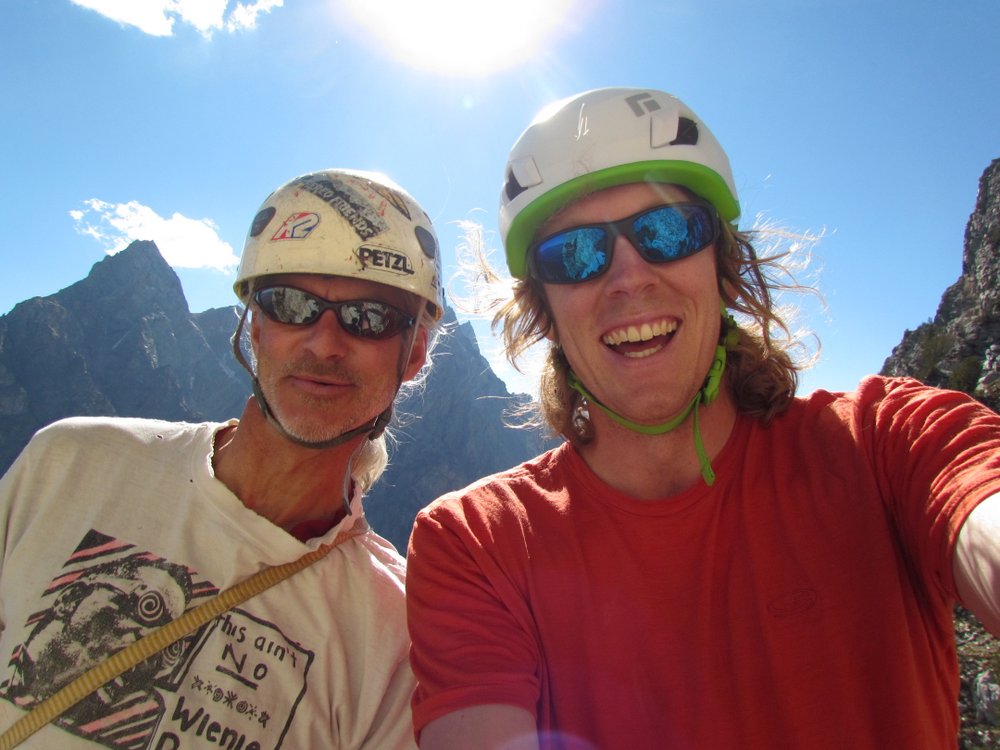 As the sun got lower, Matt got quicker, and I had less time to spend taking pictures. The fifth pitch has an absolutely amazing belay post though, nestled down into a trough overlooking hundreds of feet of.. nothing. I didn't get any pictures there, but did bust out the camera and set it to recording, hoping I'd find a chance to stick it over the ledge. That didn't really happen, but here's the video regardless.

We scrambled across the summit, set up a rappel, and downclimbed/hiked out of the couloir, back to our packs, and as far down as we could before we lost all of our light. The trek down went much better, as we had a trail to follow the entire way. We had to break out our headlamps at one section of class four downclimbing, but after that were home free. We stopped at Jenny Lake and had dinner and enjoyed looking at the stars. The Milky Way was on full display that night.

After our dinner, we set out to hike around Jenny Lake, and ended up on some bizarre trail from hell that had us both bitching about hills. Five days later, my quads still hurt.