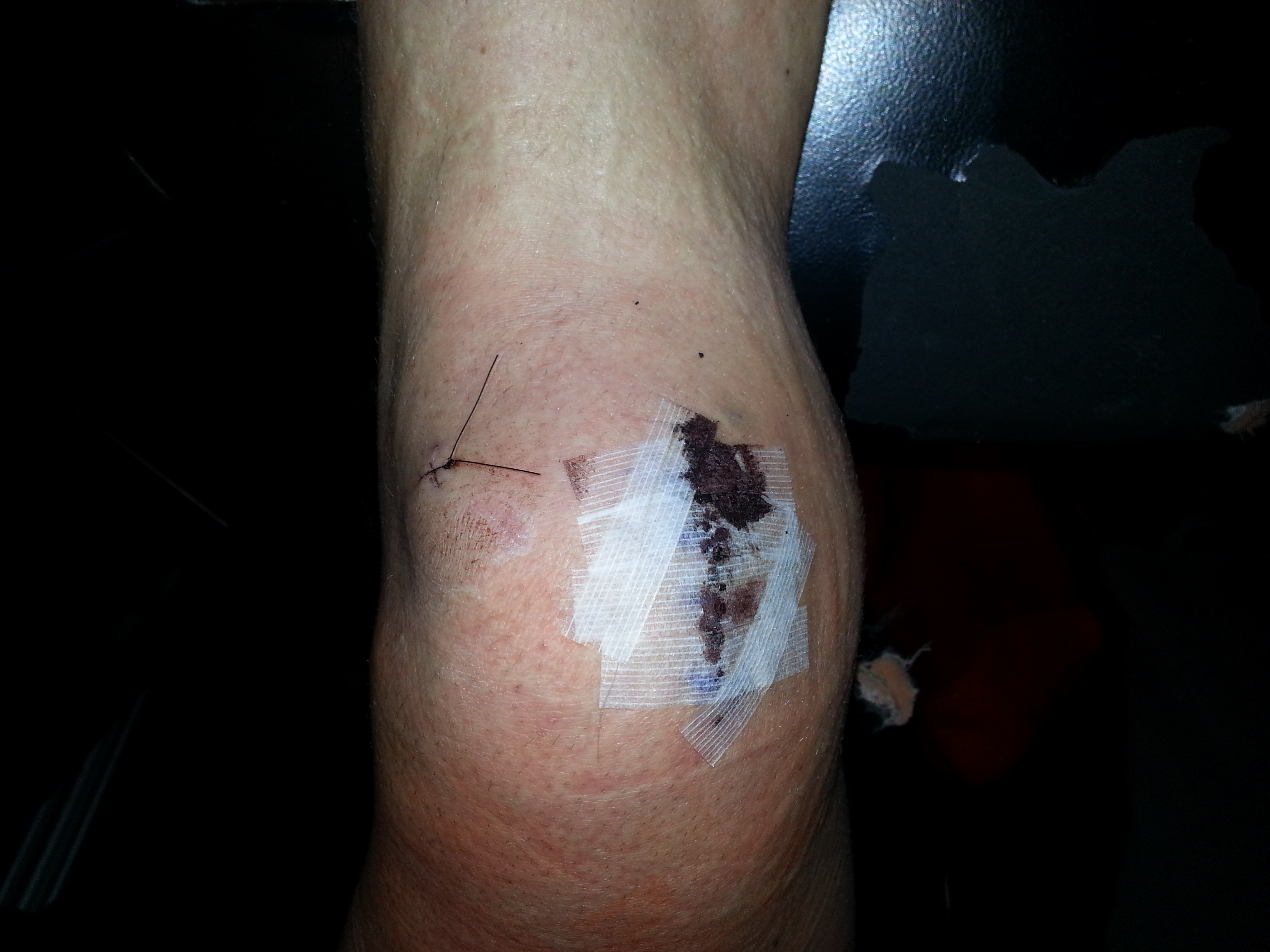 I mentioned at the bottom of this post that I dislocated my knee, and that it was the inspiration for my kayaking a month later. Another month after that, I was out climbing with Sam and AJ, Figuring Out Jackson Life.

A week after that, I went on my first mountain bike ride since November on slickrock, or to put it how I thought of it, for the first time since my knee surgery. At the very end of that ride, turning sharply and with speed (how else would I be riding?), my front tire blew sideways on me and I took a fall. I was in my drops when this happened, and so there was no "rolling" with the fall. I was already at ground level when the falling started. There was no preparation, no time to plan how my body would react.

My roommate and bike guide was just around the corner, and his cheers of "Yeah buddy!" switched to "Dude! Are you alright?" I was back on my feet nearly instantly, riding on adrenaline, psyched to have taken my first fall of the year. It was hard, and I had set down with a solid THUMP directly on the back of my right shoulder. There was pain there, but nothing severe.

Still, something didn't quite feel right. "I think my shoulder's dislocated," I said, reaching across my body with my left, grabbing my triceps and seeing if I could pop it back in. "No, that's not it, I–" and here, I broke off, and screamed as something at the front of my shoulder crunched and grated under the surface. At least I knew it wasn't dislocated.

An hour later, at the ER, my arm in an impromptu sling Matt fashioned from an old shirt, Matt was busy filling in my paperwork. Five minutes into this, I let out a great sigh of relief, released the tension in my body, and sat back. The Percocet prescribed to me for my knee surgery, and which I had popped just before the trip to the hospital, had just kicked in.

More time passed, and I was wheeled around from place to place on a lovely bed. After being at rest for some amount of time, I met a man, and he showed me a picture. It was this.

As he showed me this, he was speaking, but most of it was muted behind the word "surgery". Surgery, again. This was a monumental word to me.

The surgery on my knee had been exhausting, frustrating, and handicapping. I'm writing this post four months out from my knee surgery, and I still flinch at the pain it generates as I walk up stairs. At the end of June, just two months out of my knee surgery, I had just earned freedom from a full leg brace. Now, my mountain biking celebration sounded like it was sending me back to another two months of nothing.

I called my friend (and, coincidentally, physical therapist) John, and tried to leave him a voice mail telling him what had happened. I never managed to say anything, as the exhausting, anxiety, fear, and drugs choked away any attempt at making words into an aborted sob. I texted him instead.

All of that happened on a Saturday. The OR wasn't open until Monday, but it did look like they'd fit me in. Sunday night, arm held in a sling and working it for all I could (free beer for the broken guy!), I saw a very butch woman I'd met that same morning. I said hello, and she proceeded to give me a great, great bear hug, on my right side. I could hear the ragged edges of my collarbone scrape and grind against each other, and had to walk to a dark corner and cry for a little bit. 'ware inebriated women that weigh more than you when you're broken.

On Monday, I went in for surgery. When I came out, my shoulder looked like this instead.

The sun was also much lower than when I had gone in. If you look at the first photo in this post, you'll see my collarbone broken into three separate pieces. Before the surgery, this was the operative word for my shoulder: "broken". After the four hour surgery, where my surgeon had to take a break to call my pickup ride and let him know I had "messed it up real bad", after he had picked out some of the fifteen plus pieces of my collarbone and reassembled the remainders into something he could force together with eight screws and a plate, well, the operative word changed to "shattered".

I found out all of this later: I was far too stoned that day to remember much about it. I do remember a phone conversation with an excited two year old telling me she had made icecream she wanted to share, and that it was delicious when I actually got to have it. The surgery was a mystery to me though – for a week, all I saw was this.

Two days after the surgery, I was out of the sling and moving my arm normally. Range of motion was limited, and so was the amount of weight I could hold (none, more or less), but my god. Living in the future is fantastic. By Friday, I was off of the pain meds. I had discovered that soft tissue and hard tissue surgery can be very different things, and this is something I'm beyond grateful for. I don't know if my psyche could've handle two simultaneous long-term injuries.

Time, and time, and time. There were some complications and weirdness (like when I bled through two shirts having dinner with a friend), but here and now, 6 weeks out, things are looking good. There was some big bruising, and some very cool steristrips, but it's all just ended with a high-sex-appeal large scar.

To my dad, sitting on the gurney after discovering I would be having surgery, I wrote a text message with three words: "Climbing, yoga, guitar." These were the things I thought I would lose after having just gotten back climbing and yoga (guitaring was my one activity my knee didn't take from me). Well, the same Sunday the woman bear hugged me, I played Blackbird and Dust In The Wind on a friend's beautiful guitar, until my arm went completely numb. I'm hoping to climb the Grand within the month. I started yoga again a week ago.

Update: And then I broke my collarbone again