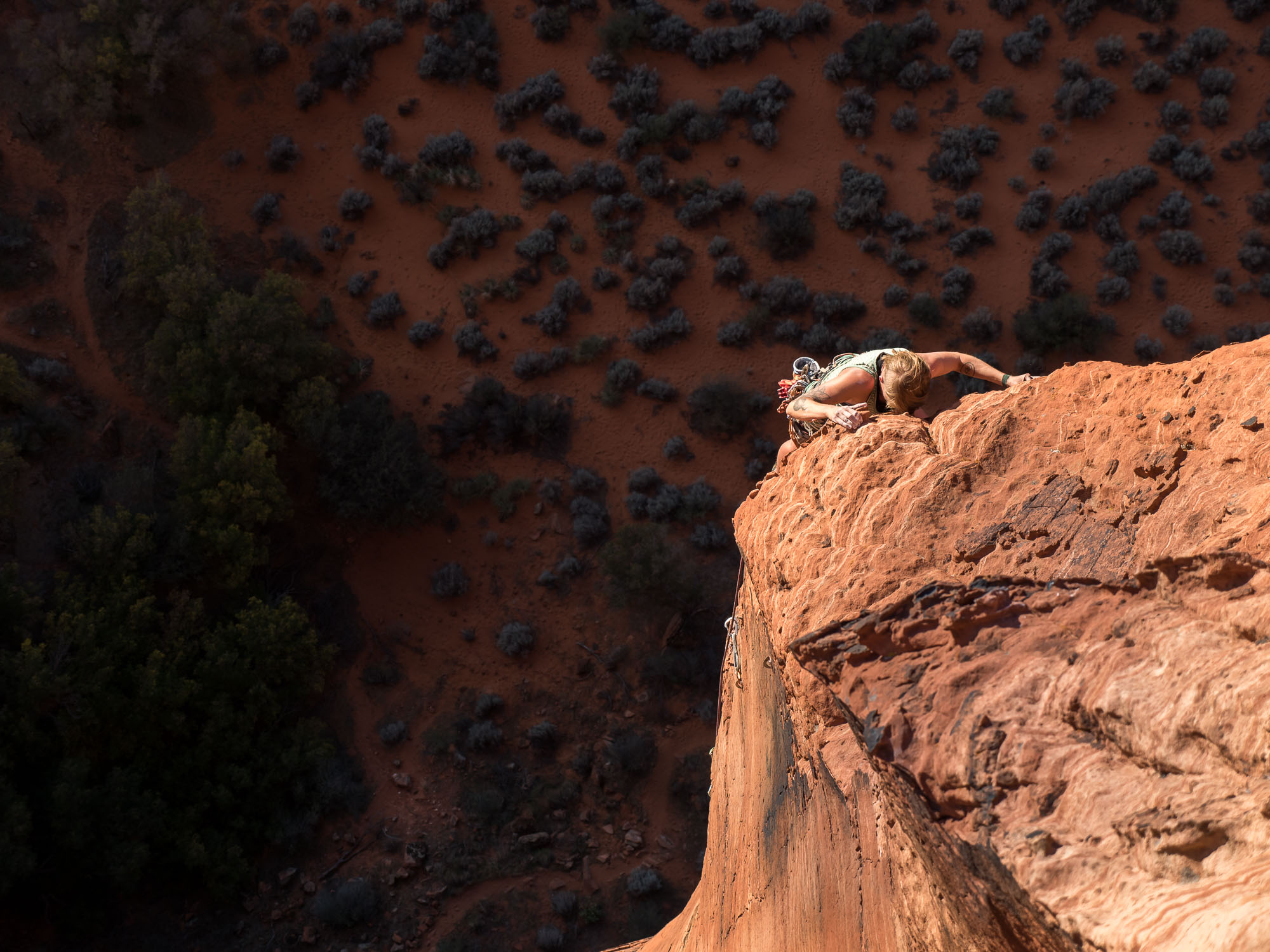 If you've ever wondered about the logistics of multipitch photography, so far as I see it, there are three solutions (with minor variations within each).

The day that we three Desert Season Amigos - Dave, Disa, Matt (me) - climbed The Richness Of It All, 12a, we went with Option 3.

Technically, there's a 5.1 approach pitch to kick the climbing off, but just because you're clipping bolts doesn't mean you're rock climbing. Disa took the true first pitch and was woken up with immediate technical rock climbing while Dave and I leaned back against our tethers at the top of a sandstone ramp.

After the technical start The Warmup cools down for five or six clips and then suddenly comes back at you as it steepens back with smaller holds.

I followed Disa up, then came Dave. 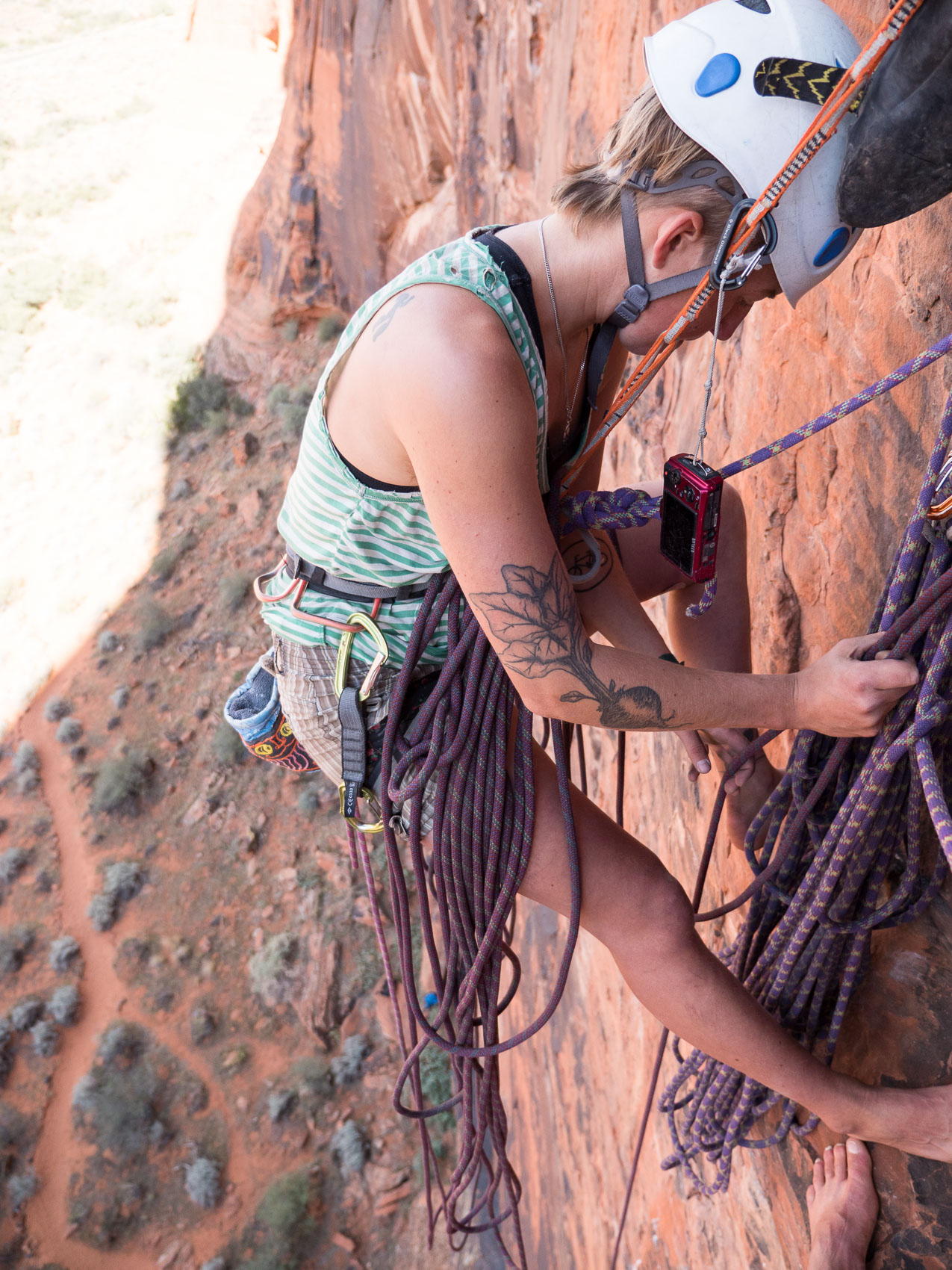 With the goal of shooting down at Dave as he (hopefully) onsighted, I took point on the crux pitch.

My god, did I just have a crimpgasm? What a pitch. I found the crux to be - surprisingly, given that it's such a crimpy and vertical route - a mantle about halfway into the route. I repeatedly whipped there as I tried different approaches to the move, seeking the key to unlocking the problem.

Higher up, I took another fall through easy movement by committing to moving north off a great jug, rather than traversing to holds I missed to the right.

I was so excited at the anchor that you would've thought I had sent. Never has failure felt so good. EFF what a climb! 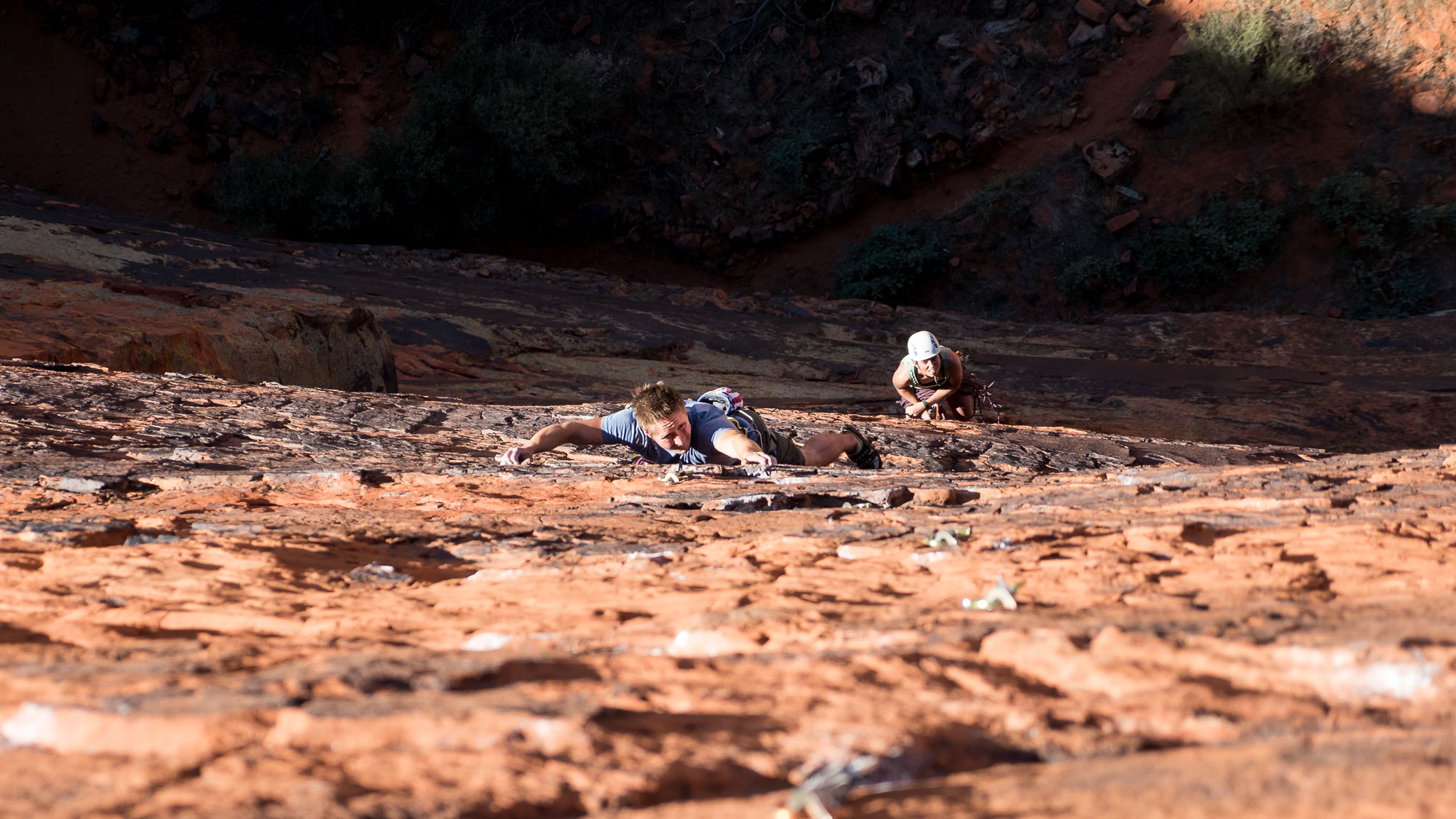 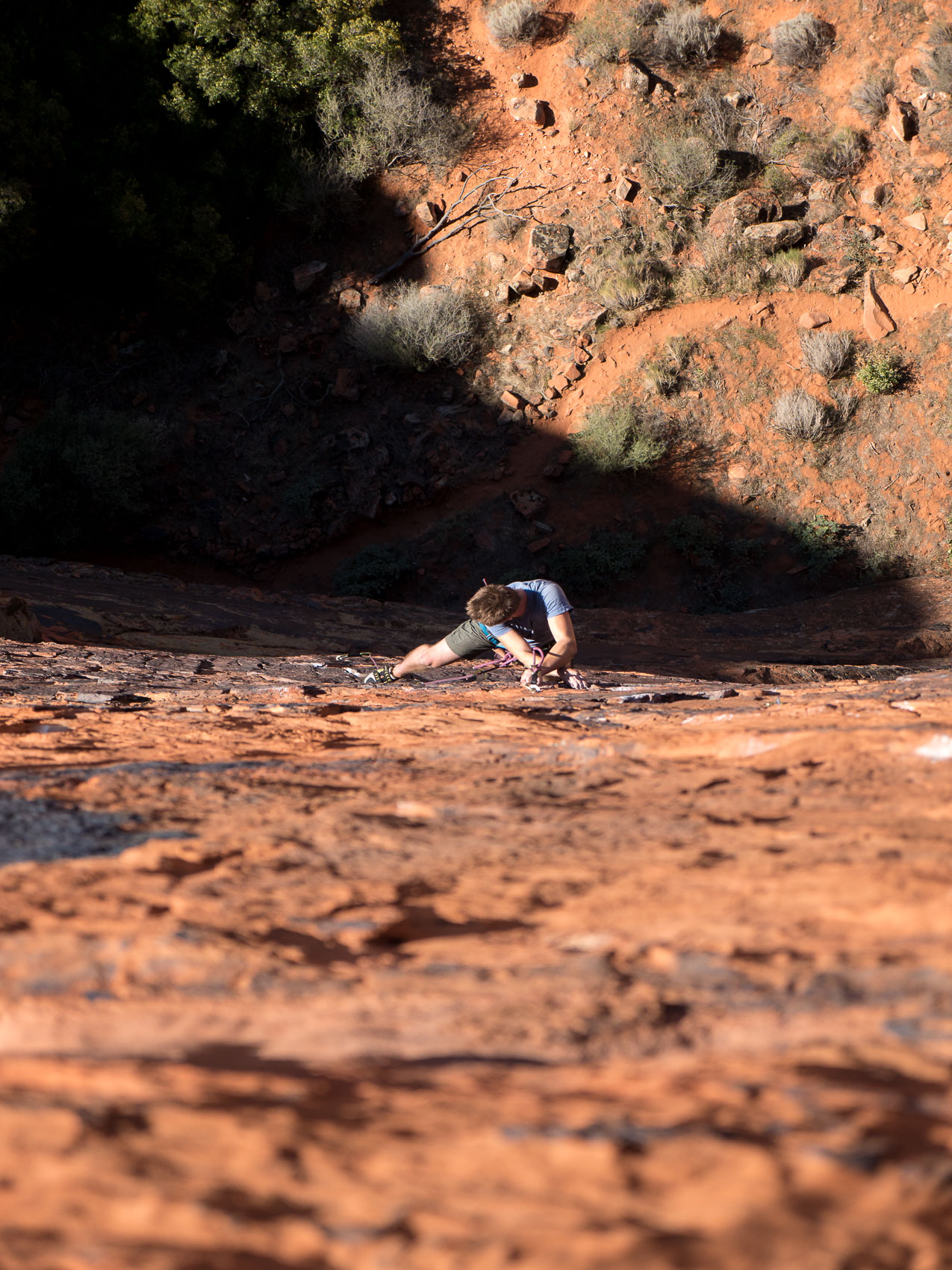 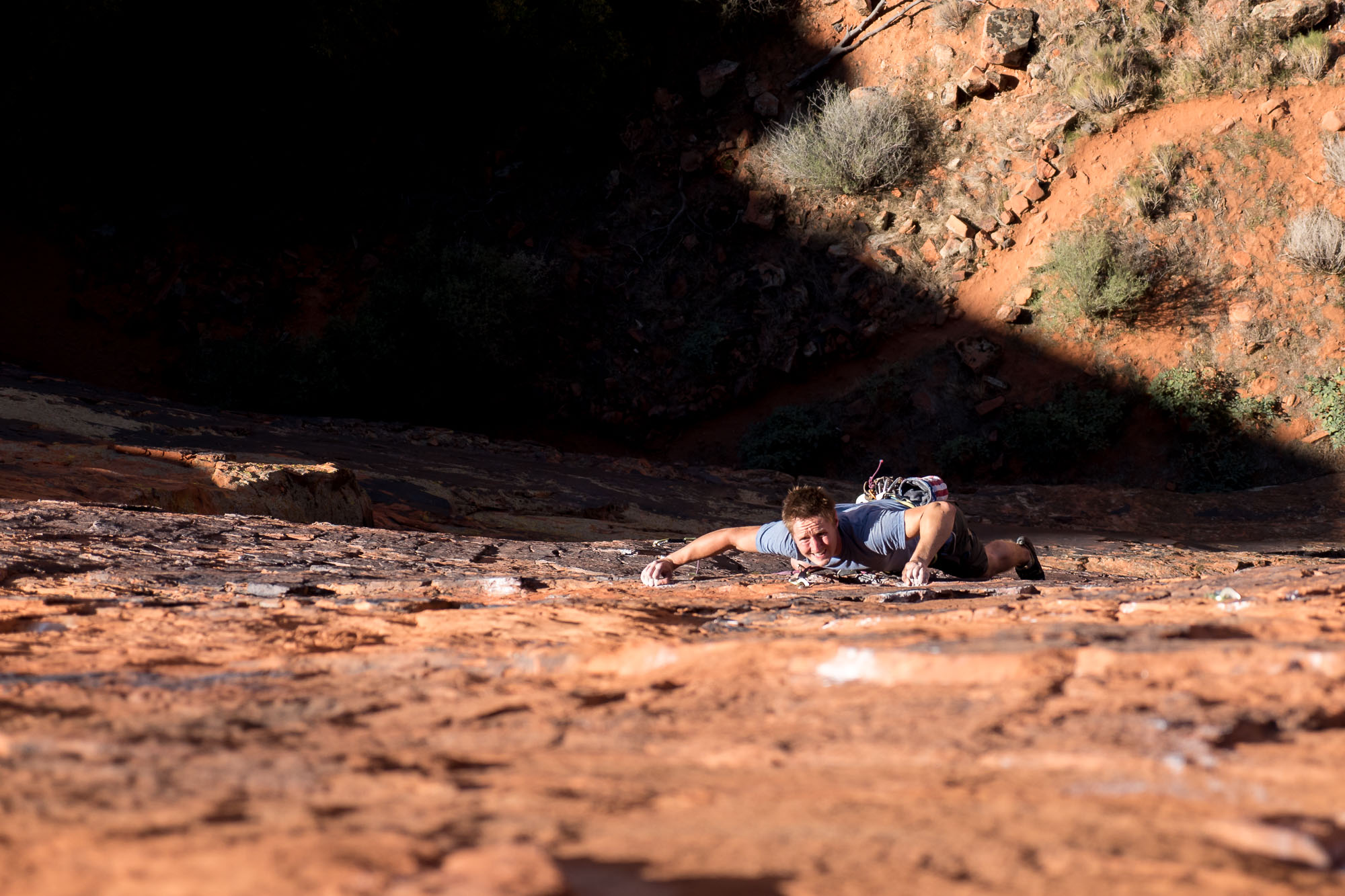 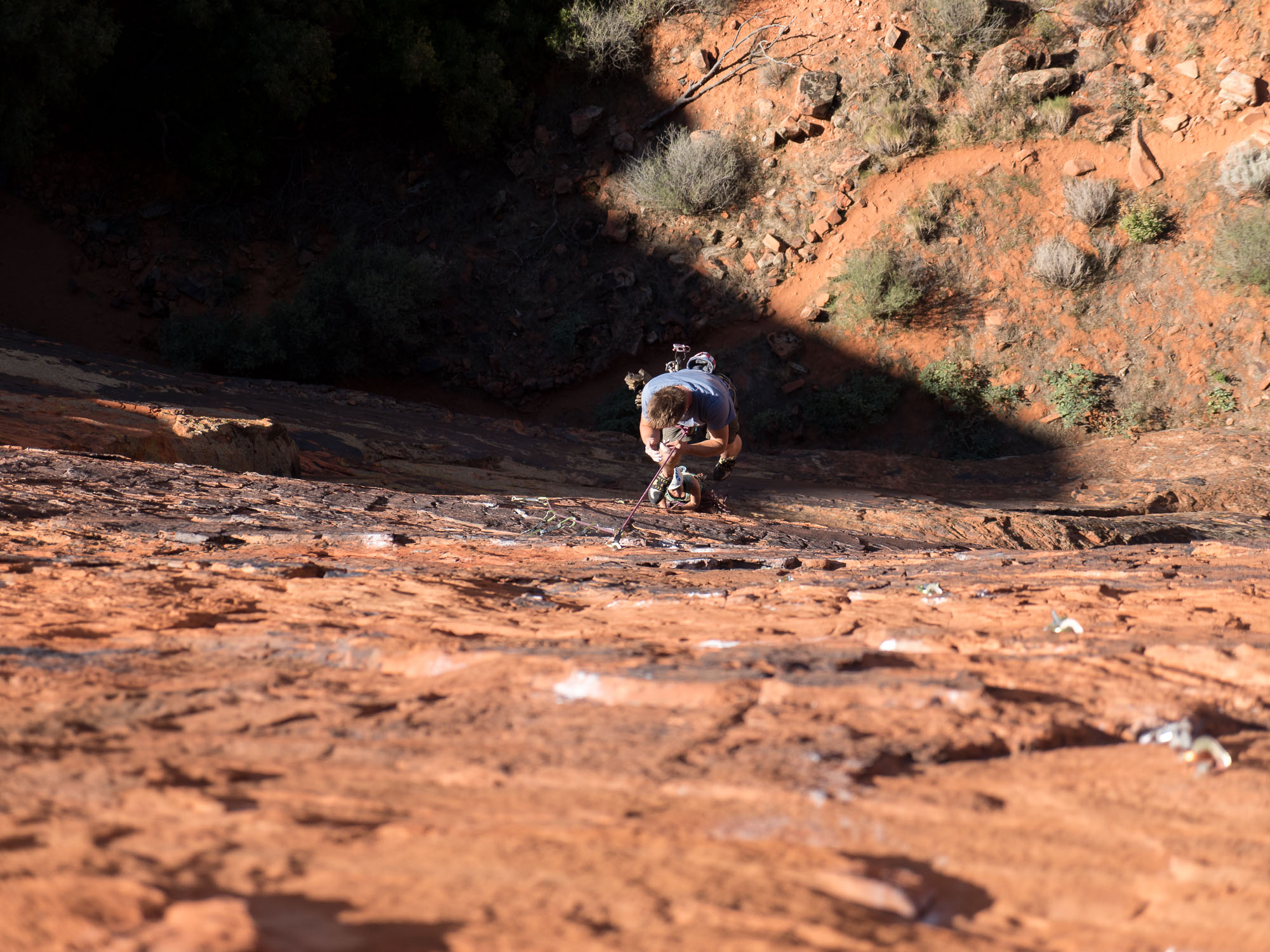 The crux got Dave, too. 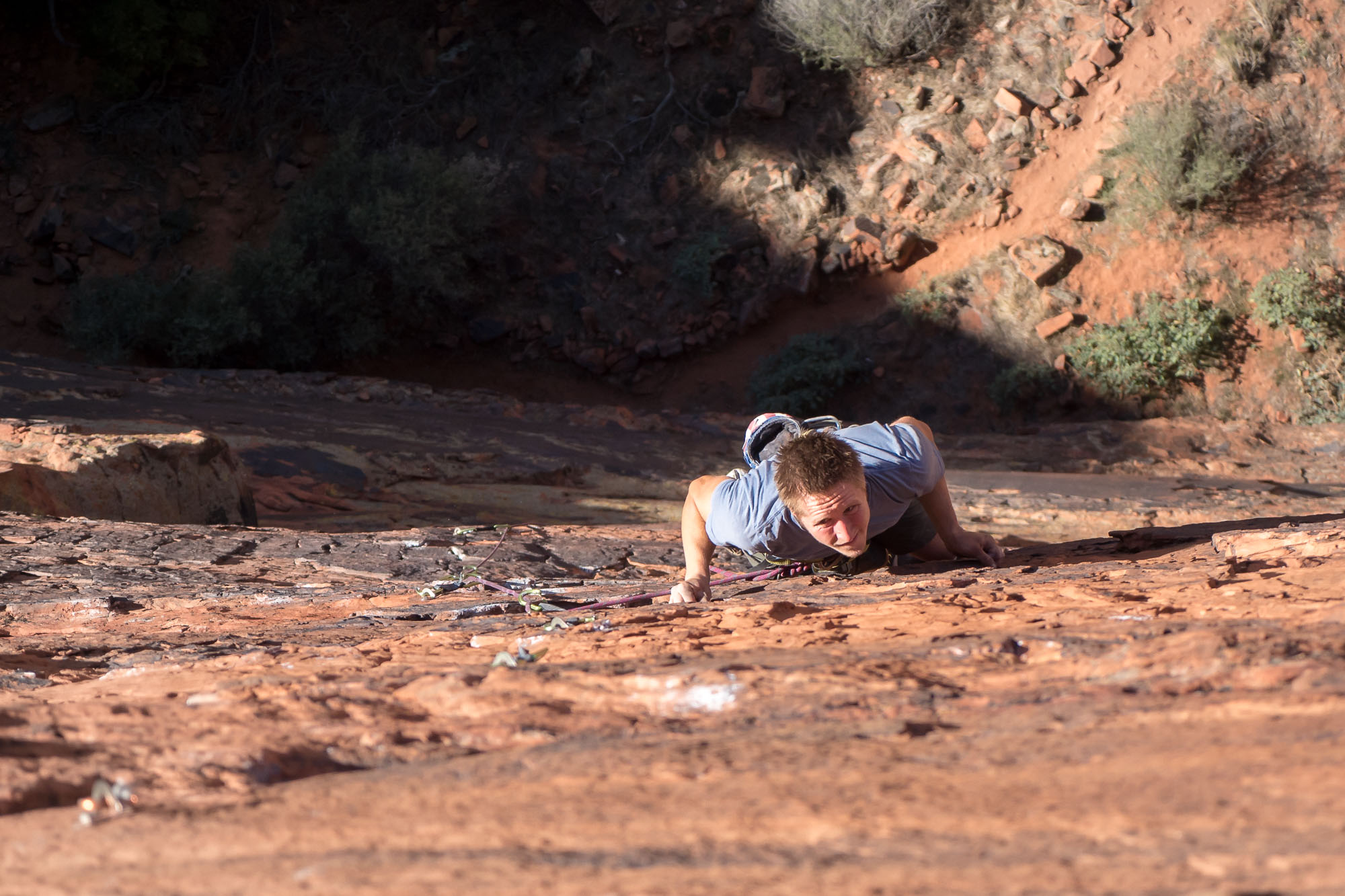 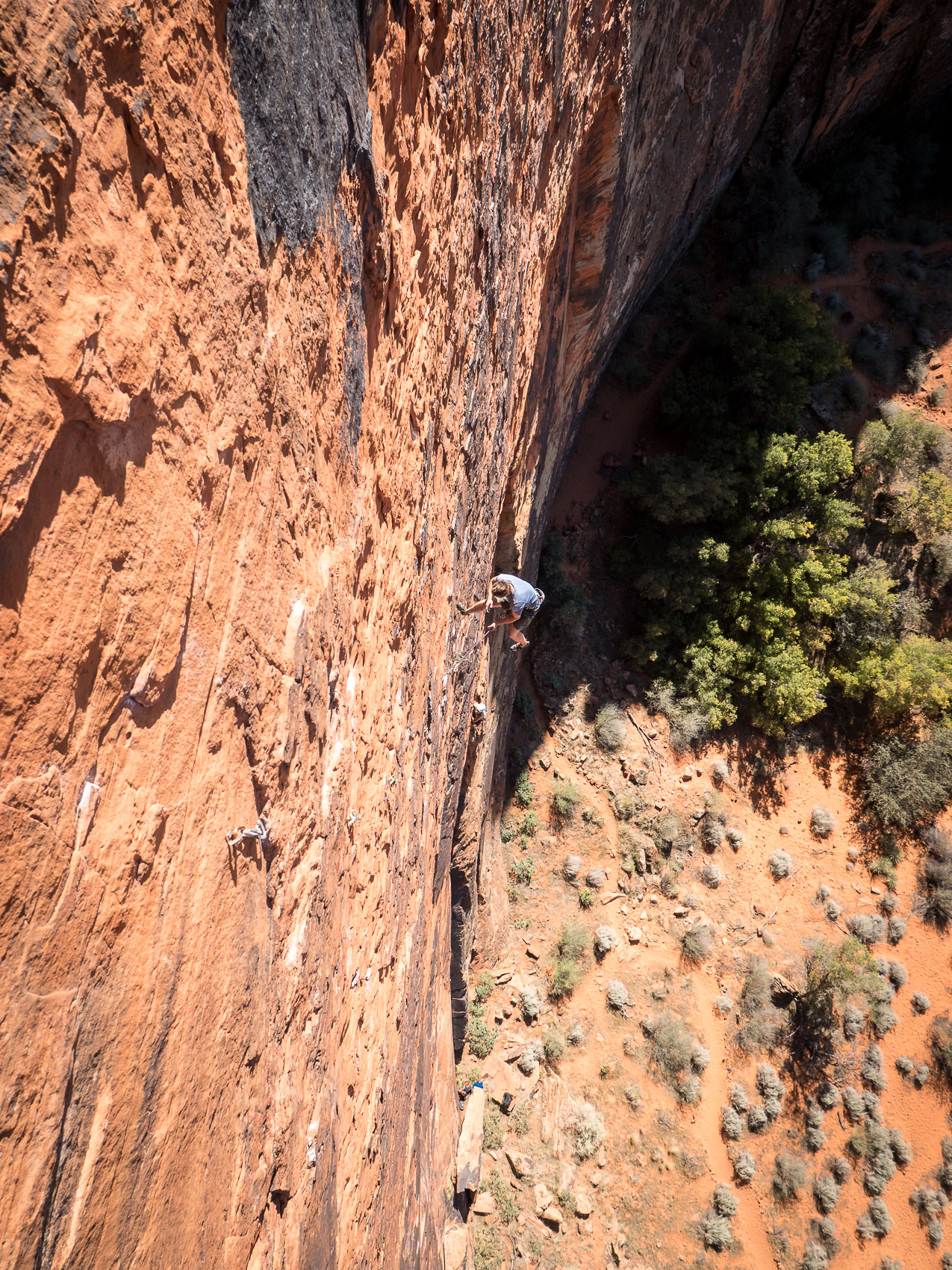 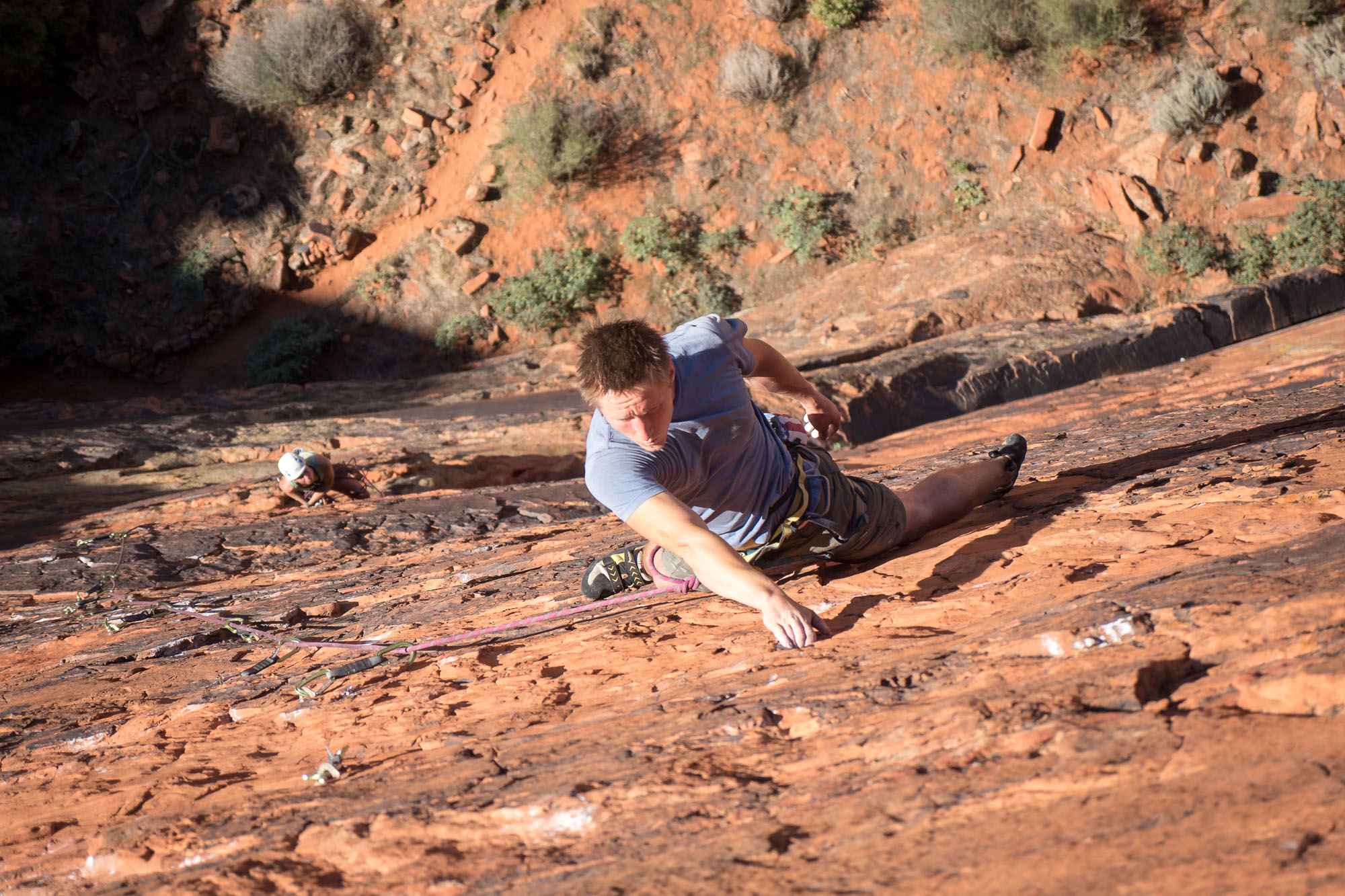 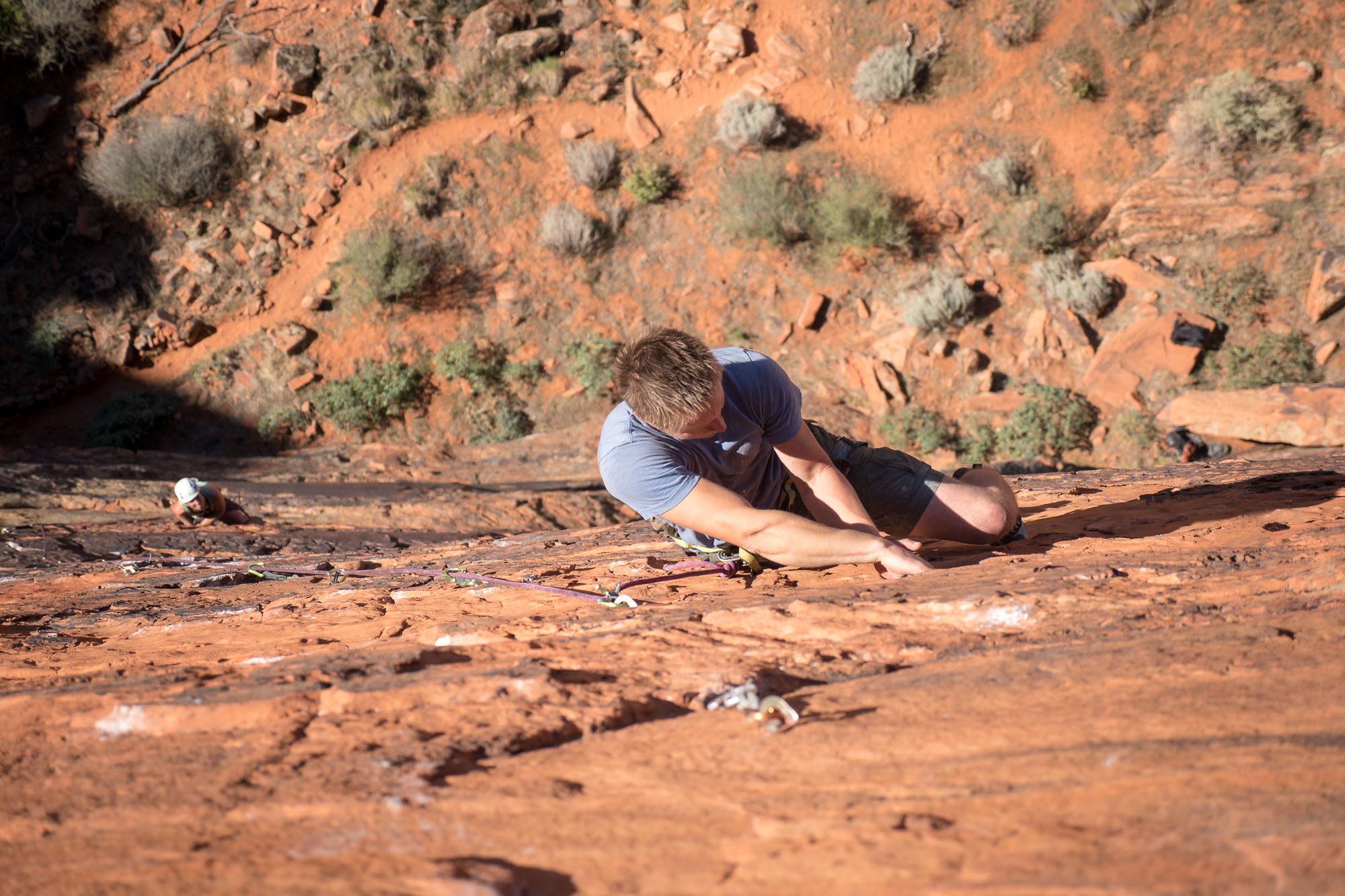 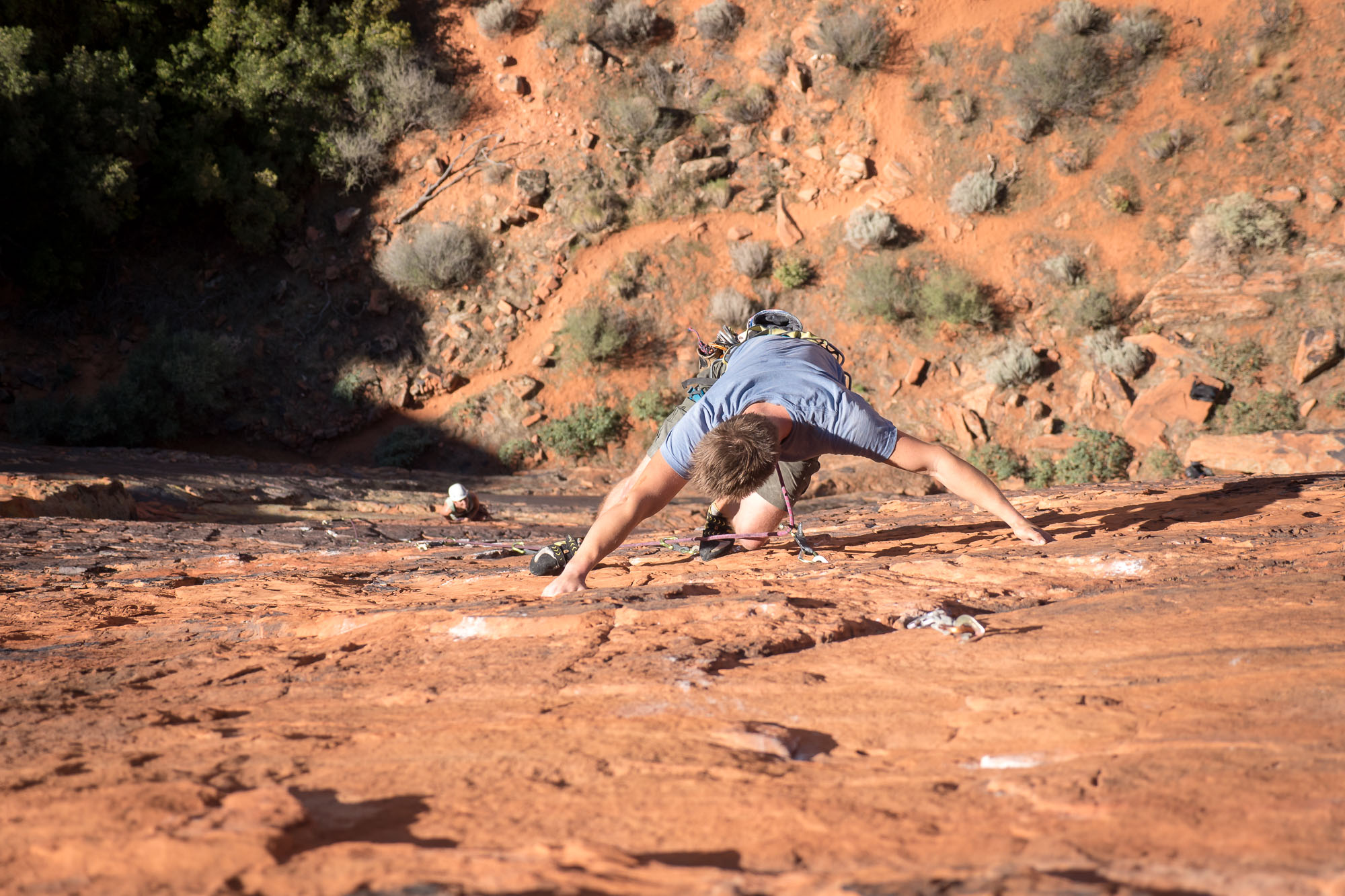 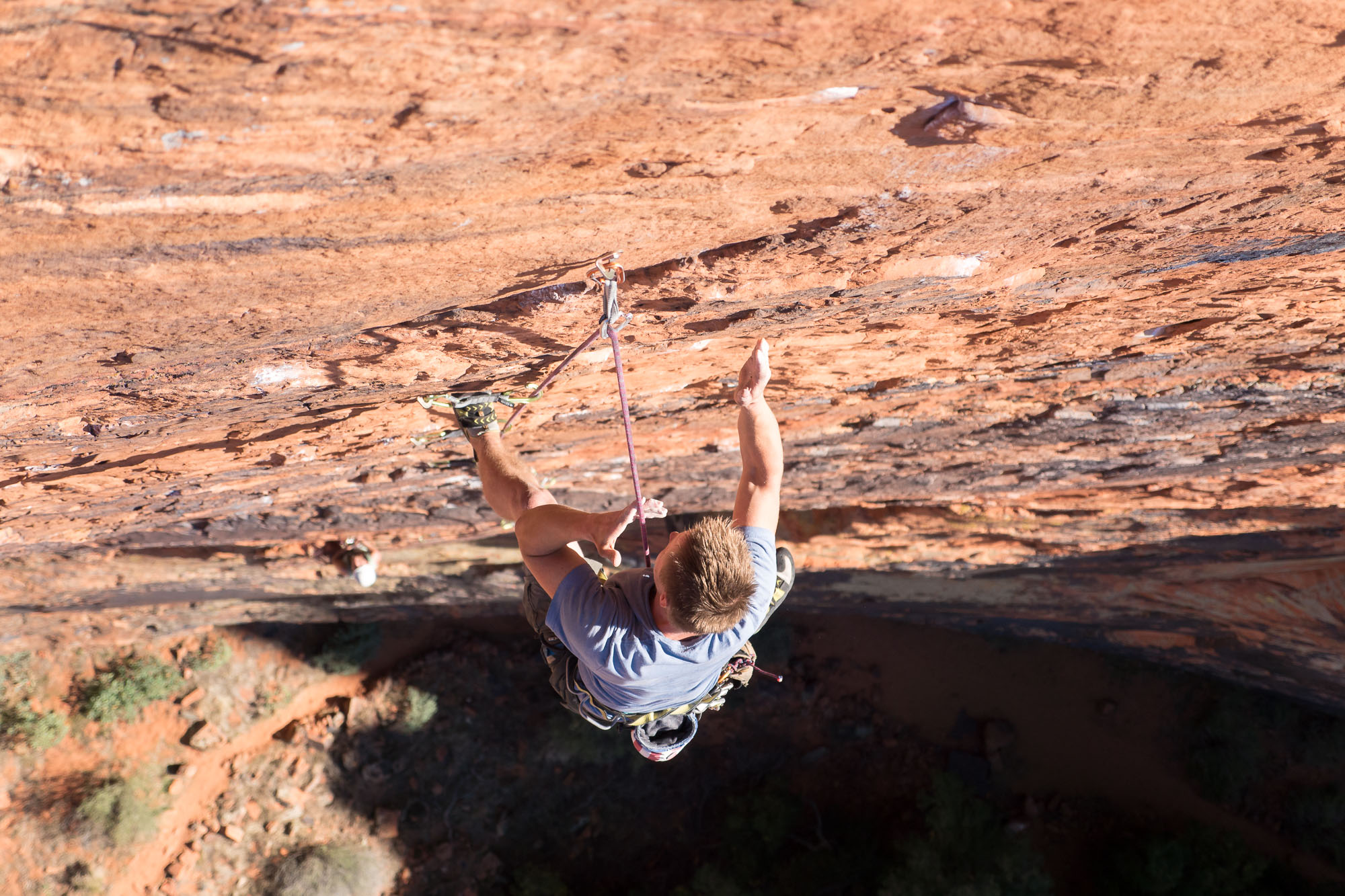 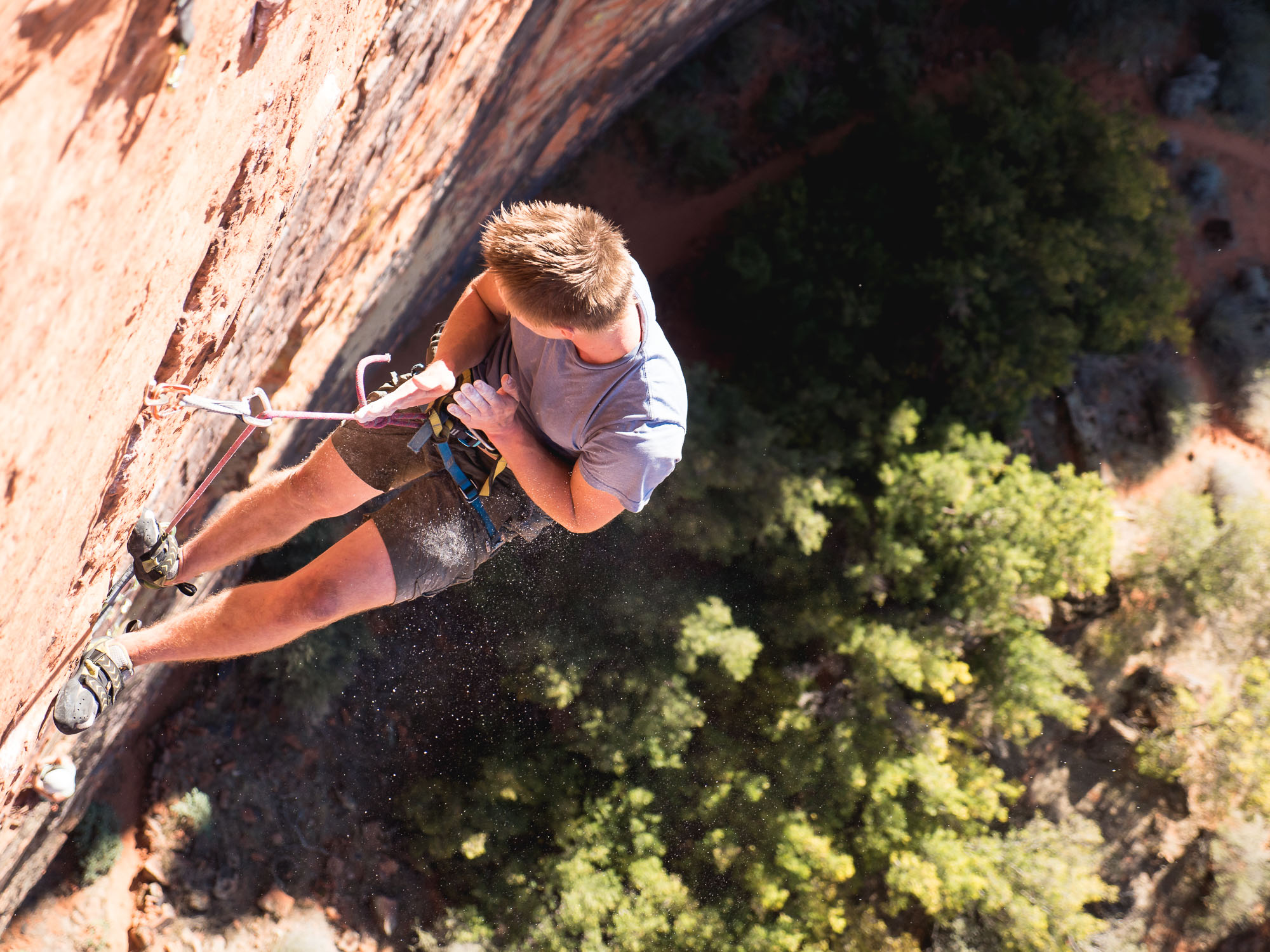 Sorry for the drama of the whip photos Dave. They're just too good not to include. Hopefully they just motivate you to want to come back with me for that redpoint.

Disa followed up the second pitch, unlocking beta that both Dave and I missed for the mantle crux. Technique, ya'll.

We put Dave back on point and sent him up the third pitch. The pitch immediately steps left and continues traversing that way through broken - and breaking - holds. Rock quality definitely dropped on this pitch. His inability to trust the holds was a clear weight on Dave's psyche.

Dave started whipping right after pulling a small roof maybe six bolts into the steep climbing. The book sold the pitch as 11c, but watching Dave, and following later myself, I'd say 11d is definitely fair. The crux is at least a strong V3, maybe V4, problem up there 300 feet off the deck.

(Aside: I joked with my buddy Darren that I'd never sent anything harder than V1 outside. "Sure you have," he replied. "You just sent it in the middle of a route.")

With time, Dave made it through that crux. Things seemed to ease up after that and he brought Disa up behind. She was also laid low at that foxy crux. After quite a bit of time at the end of pitch two (I was there as Dave lead pitches two and three and Disa followed both), I got my go at the third pitch.

I milked jugs and stem rests, knowing I'd need everything left in me to put away something that had given Dave and Disa such a hard time. I'm proud to say I managed to trash ("Toprope flash") the pitch, screaming my way through opening an elevator door to make it through the crux: the fabled double-gaston.

Since I don't have any photos of P3, here's my friend Zach's shot of Steph cleaning up the final traverse, post crux. After all that leftward movement, the final two bolts take you back right over fourth class so that the belay station is immediately above the last... and just below the amazing twisting arete that makes up the final pitch.

(It was at Zach's suggestion that we looked into the route) 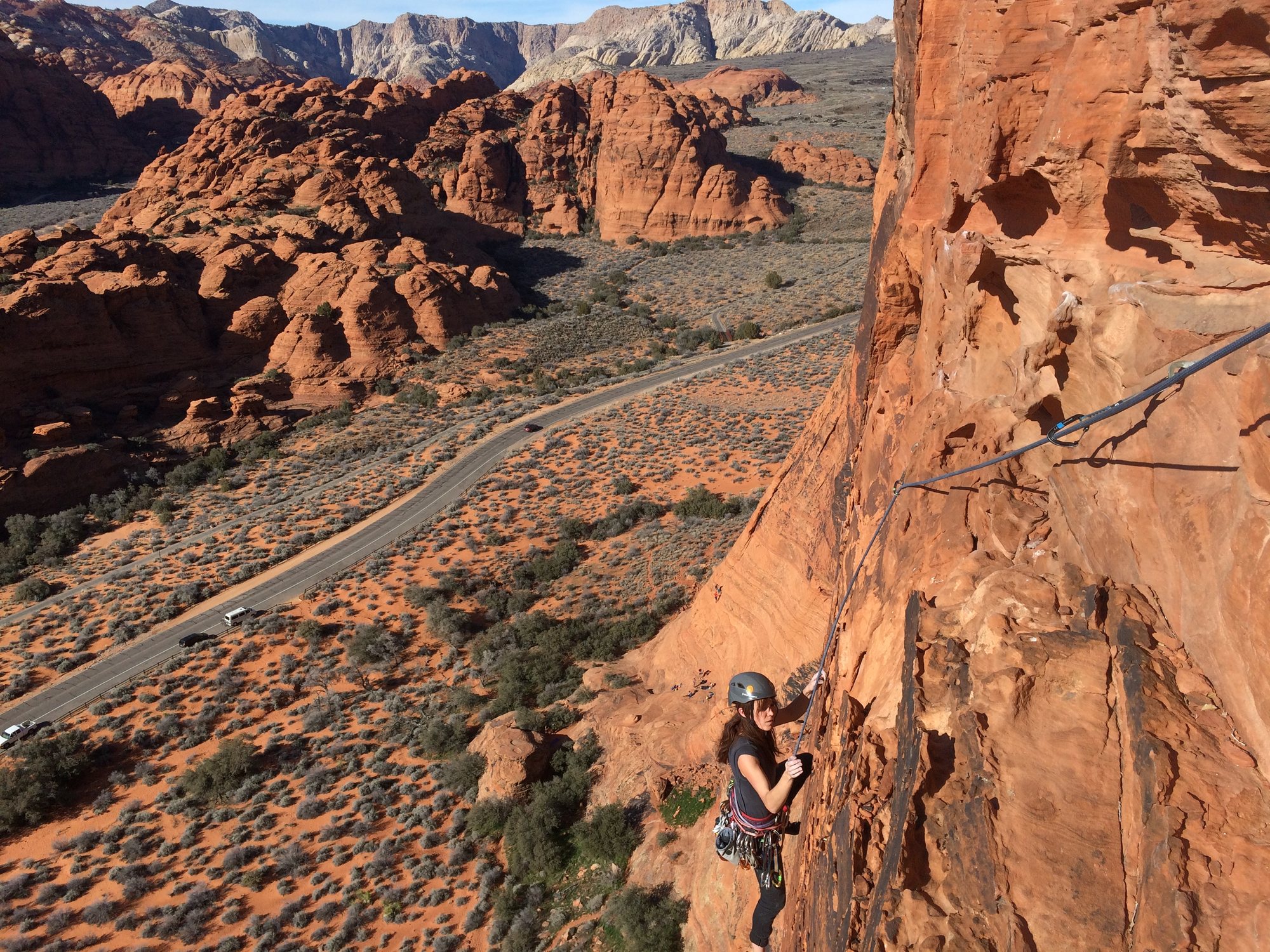 Pitch Four: It's Over, and Here's Your Reward, 10c

It was time for another photoshoot, so I led up the fourth - and final - pitch. I started with apprehension, feeling my way through loose and crumbly rock, worrying about my two friends below. As I cleared the icky bits and approached the arete, my worries became more self-centered.

Y'see, the guidebook has a typo. It claims the fourth pitch goes at 11c, and I was damn near out of gas.

Two, three bolts down, but it looks like it gets real from here.

The climb got suddenly steep and walked around a corner. I had one clear jug to begin the sequence on, but the rooflike nature of the arete meant I was blind to whatever came next. With a deep breath I committed to the move, reached high, and found another huge jug.

This trend continued for the next eighty feet.

Sweet Christ, a hundred feet of incredibly exposed jug hauling. Just like on pitch three, I started myself screaming. This time, though, they was screams o' joy. It just doesn't get better than that last pitch on The Richness of It All.

When her turn came Disa passed her helmet to Dave to keep him safe as she moved through the choss (and maybe to look that much radder for photos) and smashed out the final pitch.

By then the sun was beginning to move behind the opposite end of the canyon, shading the floor and giving even better relief to our five hundred feet of exposure. 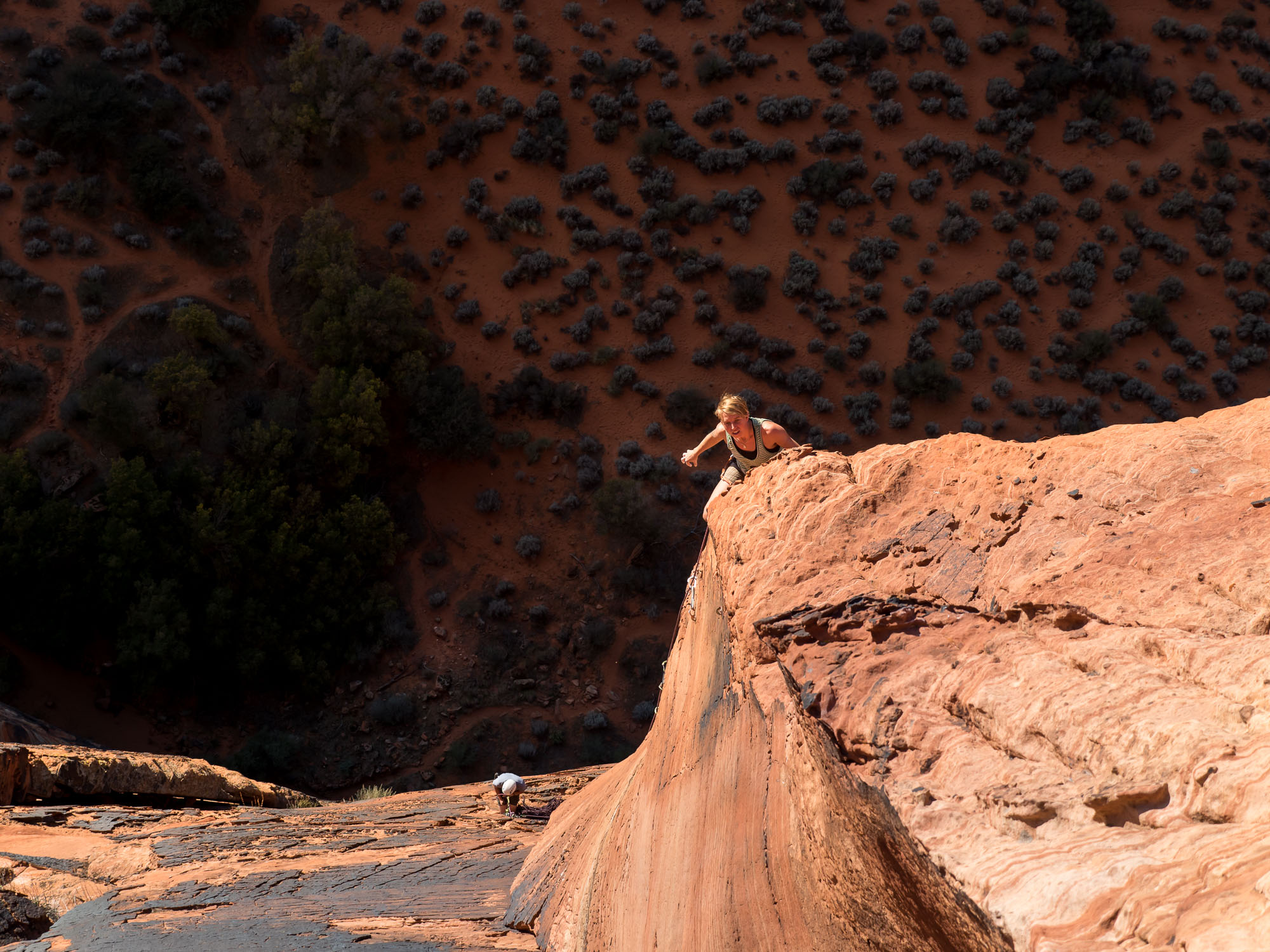 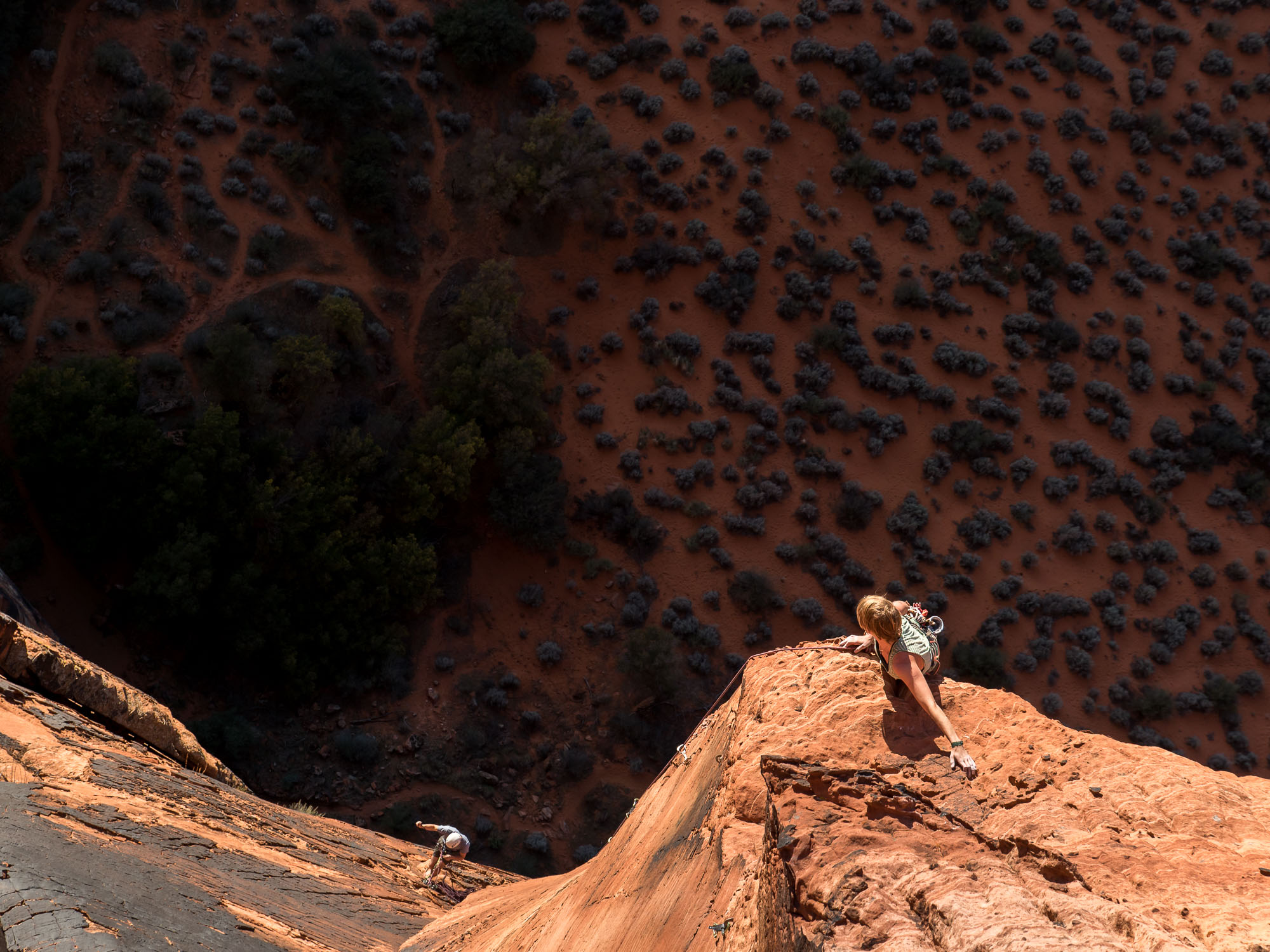 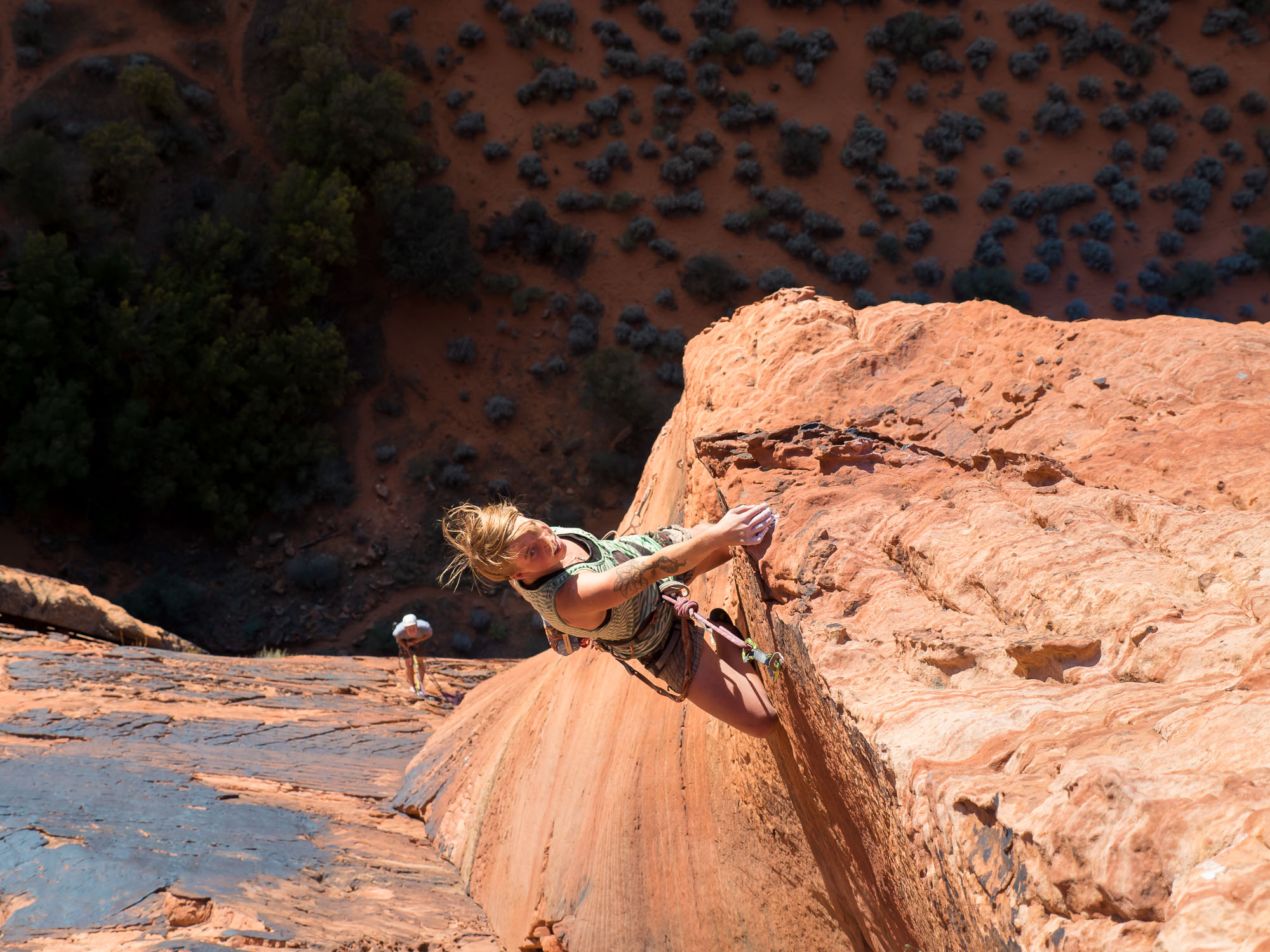 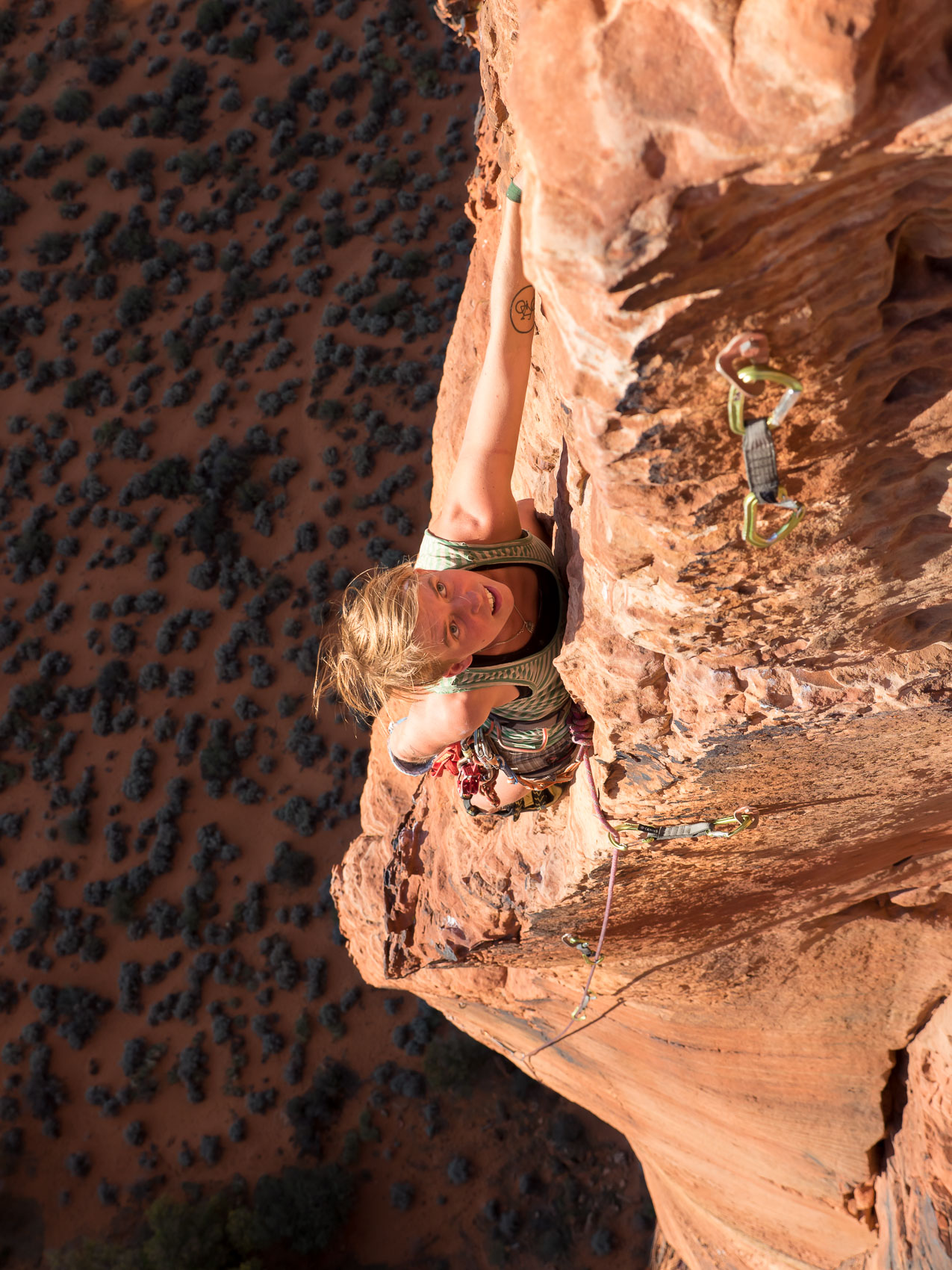 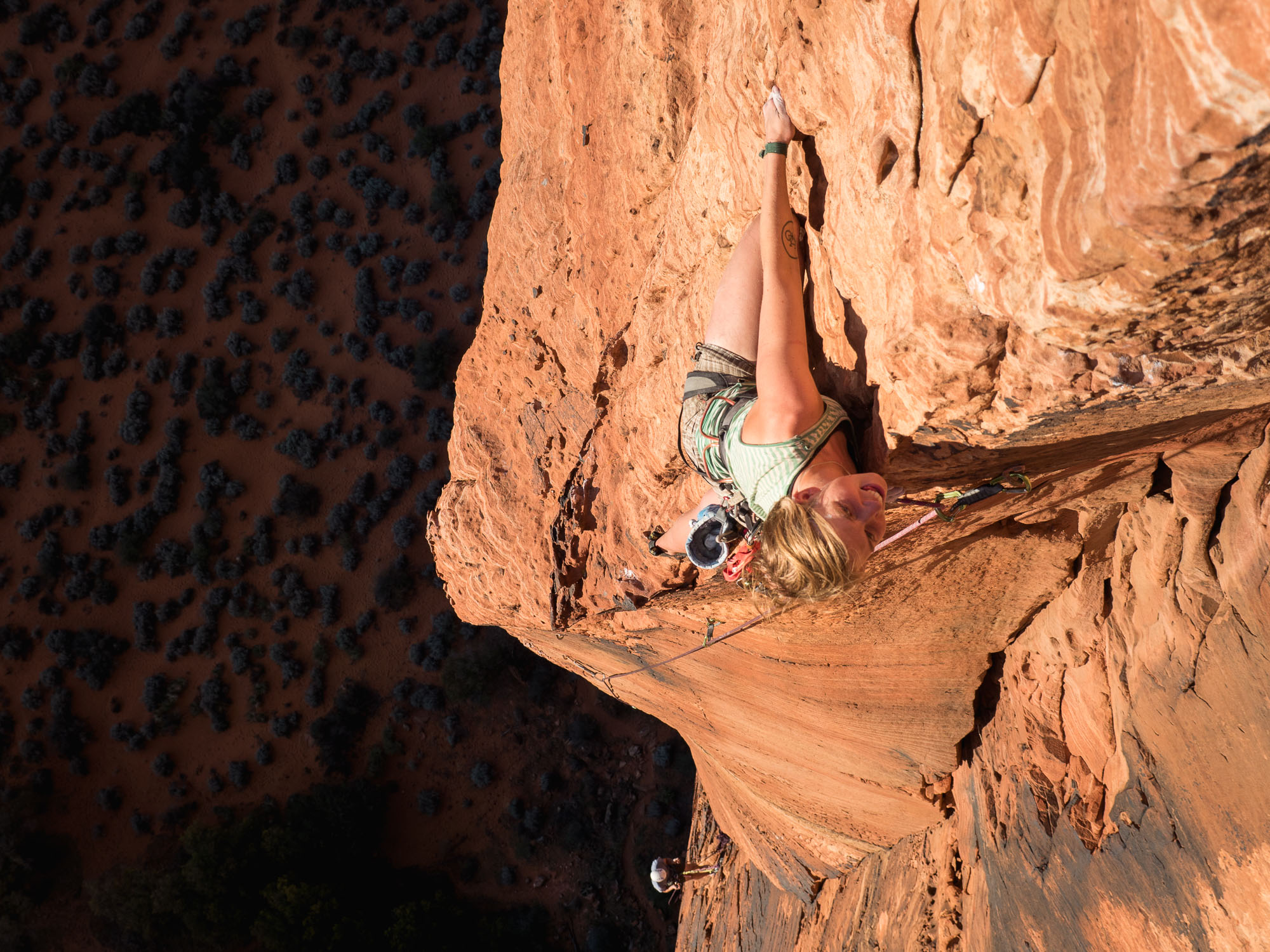 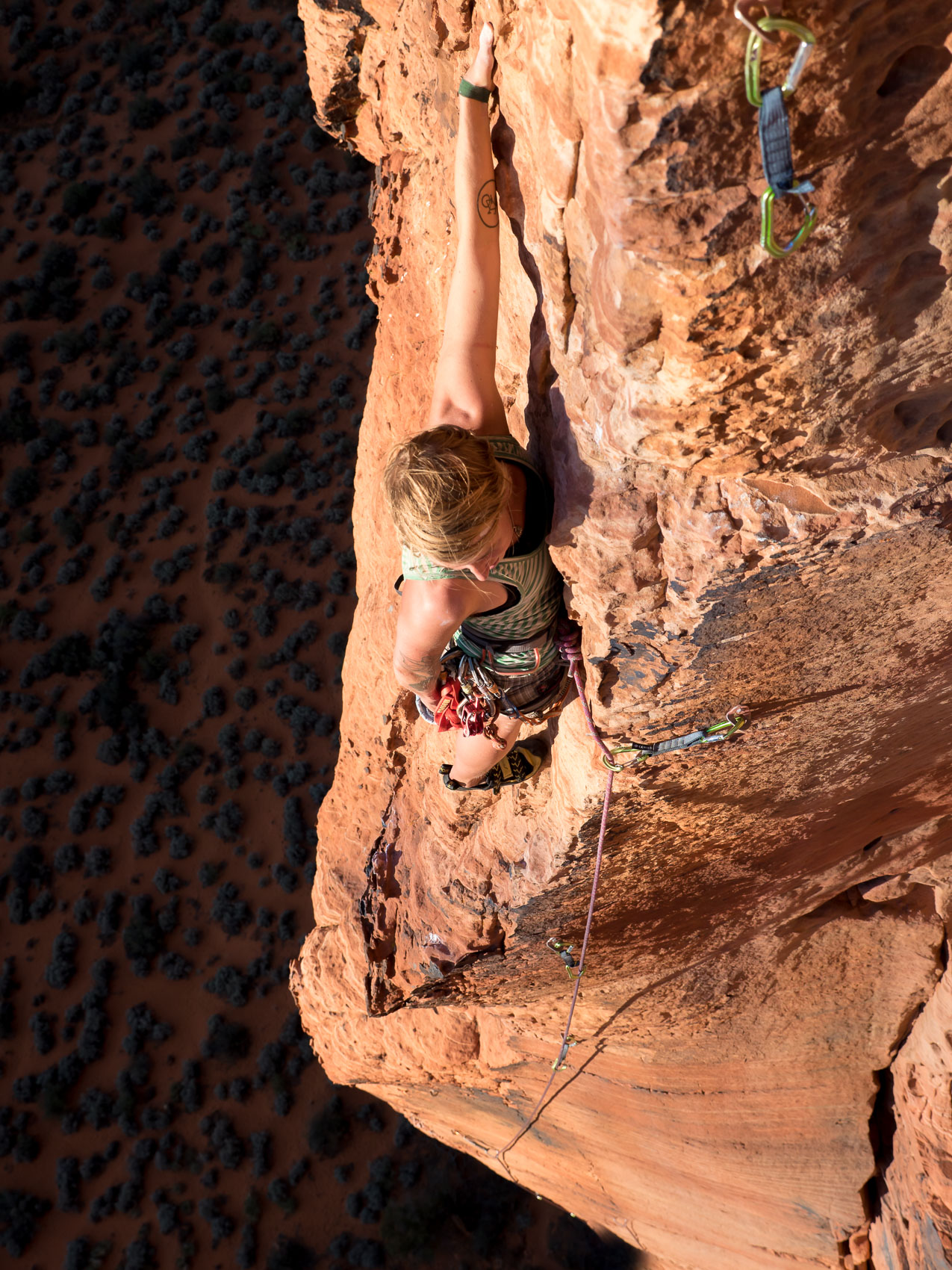 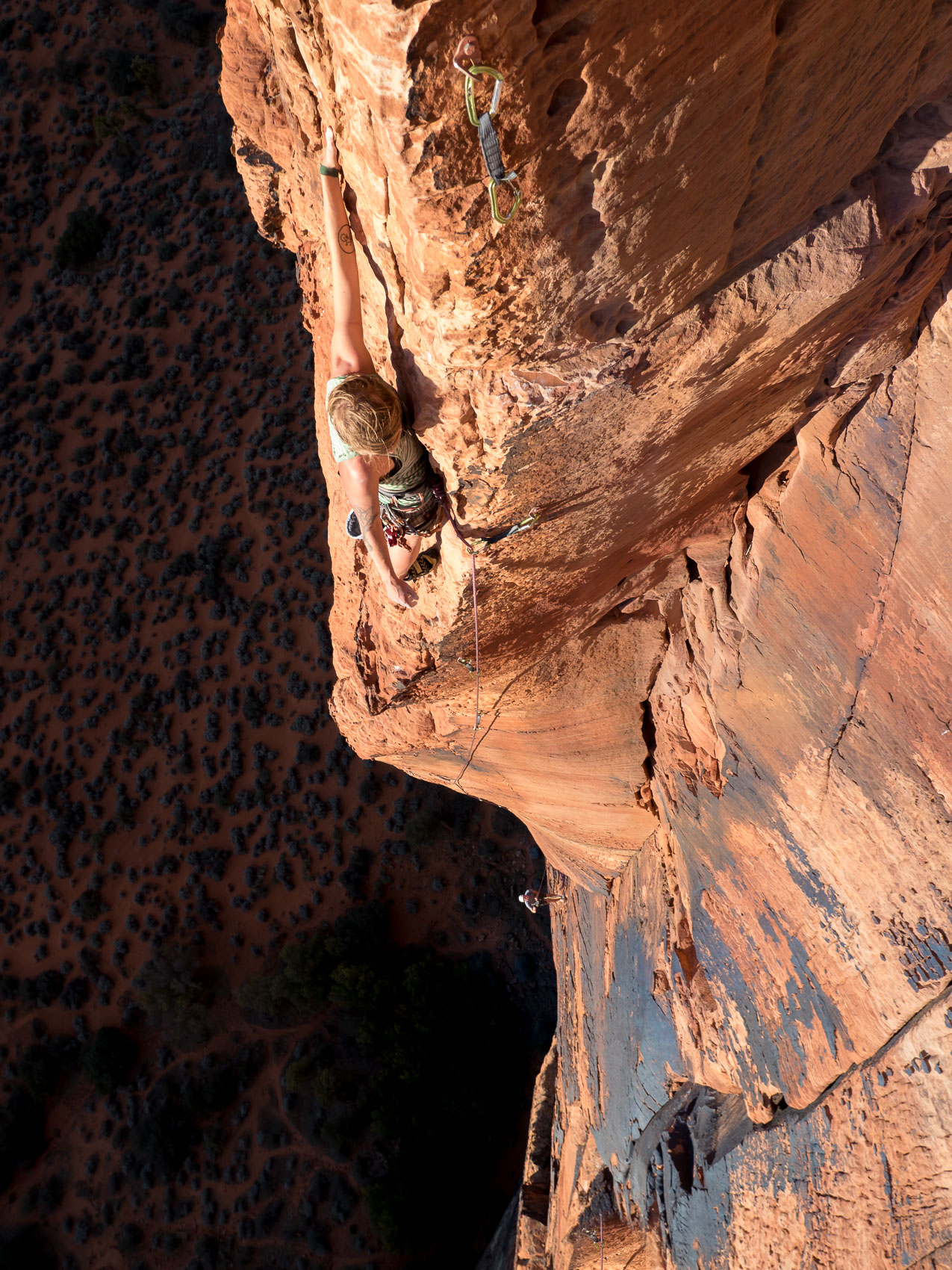