I don't think we even woke up early. A casual rollout to a tourist-jammed parking lot at the Midgley Bridge, a little ways north of Sedona. Megan pretended June was on a leash as we walked by rangers at the trailhead. I smiled smugly as we walked by hikers diligently stretching in front of a map of Midgley's trail systems.

The sport they're warming up for is one we're setting out to do with thirty pound packs over twice the distance sans trails, all just to get to the activity we actually came out here for,

my elitist climber brain told me, folding me up in the warm embrace of superiority. Later in the week I'd laugh and share that thought with Matt Steele, who would point out that I am an asshole.

The first half of the hike was on a trail though. It followed and repeatedly crossed a stream its entire length.

Pssst. Push that button in the bottom right of the map to get the 3D view of Supercrack Tower

Even in early April, we were grateful for the shade cast by trees that grew along the embankments, and for the coolness the flowing waters imparted to the air. June in particular was psyched on that mizu. 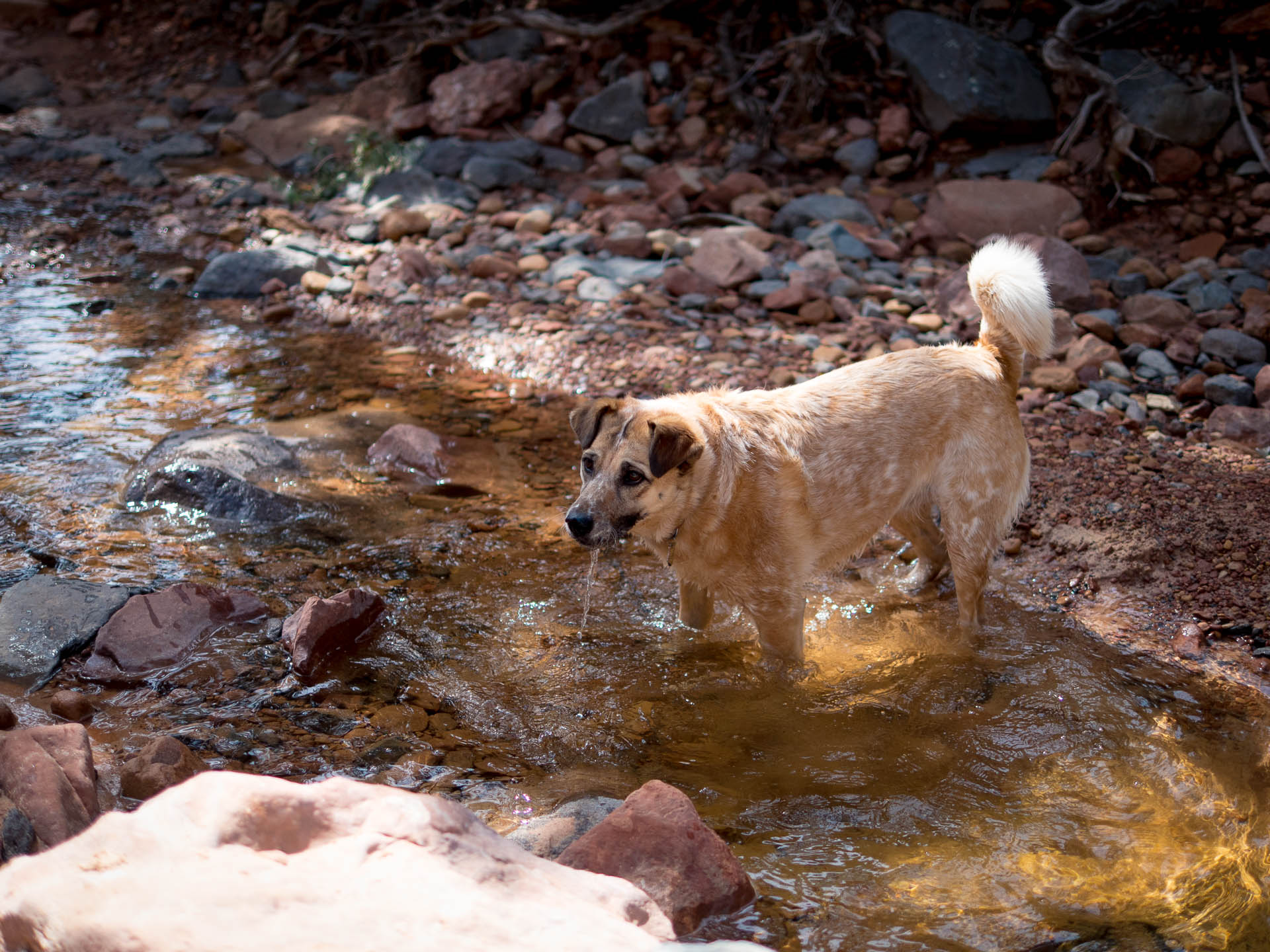 The trail's end was marked with a cairn stacked to waist height in a chicken-wire container. On it hung a rough and weather worn sign with END OF TRAIL burned black into its surface. I remembered Megan's friend Molly's story of being turned aside by the old men building the cairn, who assured her she did not want to go that way to find her climb. Hours of bushwhacking ensued, and Molly, swearing at the old men, (if I'm not embellishing) knocked the cairn over on the way out to get her revenge.

We hiked past the cairn, following the dried out streambed. A few hours later, halfway up the climb, I would think back on Molly's other recollections and advice regarding our chosen route of the day, and I would be the one swearing. 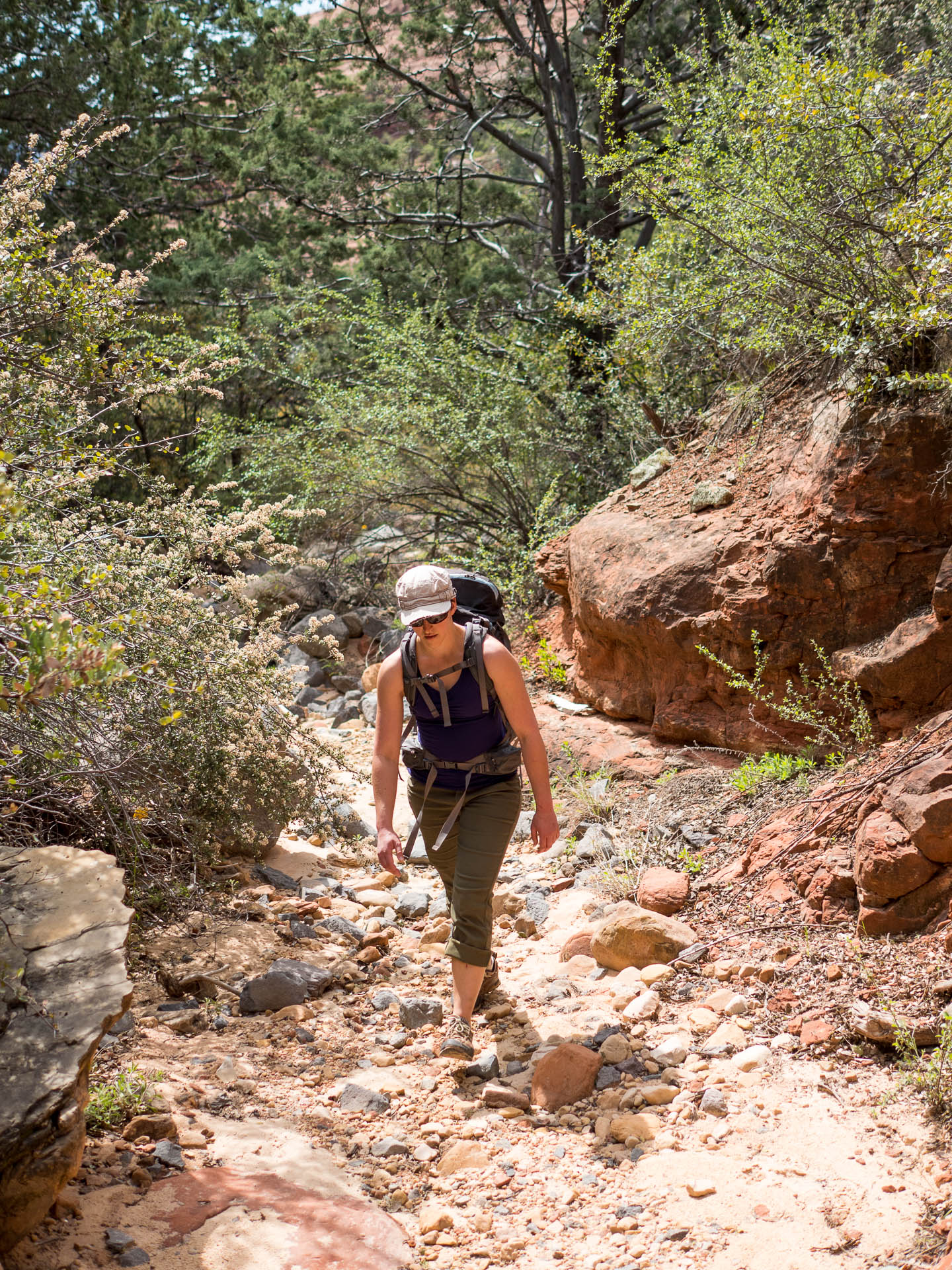 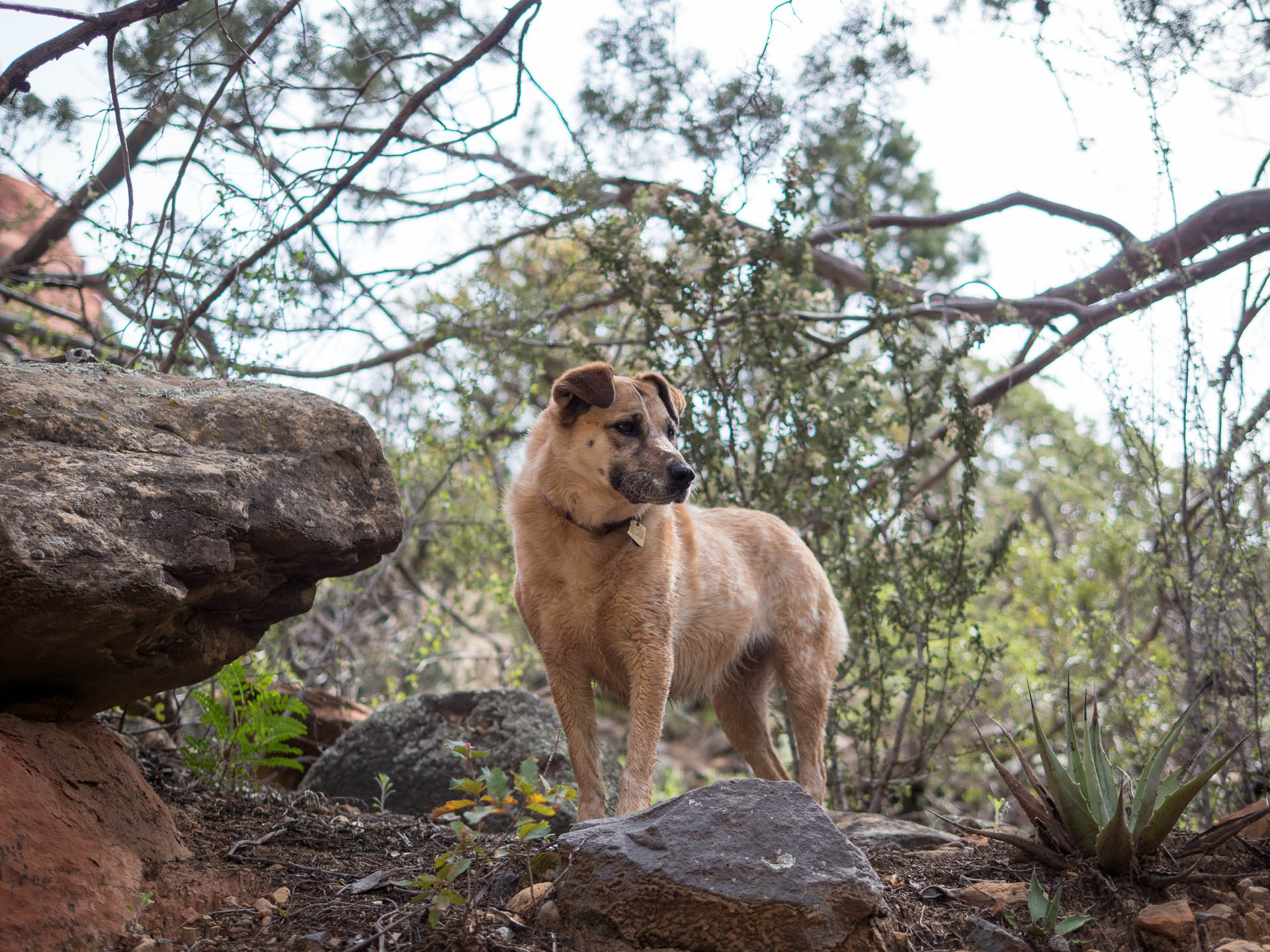 As we drew near the encasing sandstone walls and towers that formed our northern horizon our path grew rougher and wilder. We skirted over and under and around deadfall and flashflood chokes. At points the streambed became unpassable and we would scramble up one of its growing and steepening embankments only to clamber back down into it a little further on. 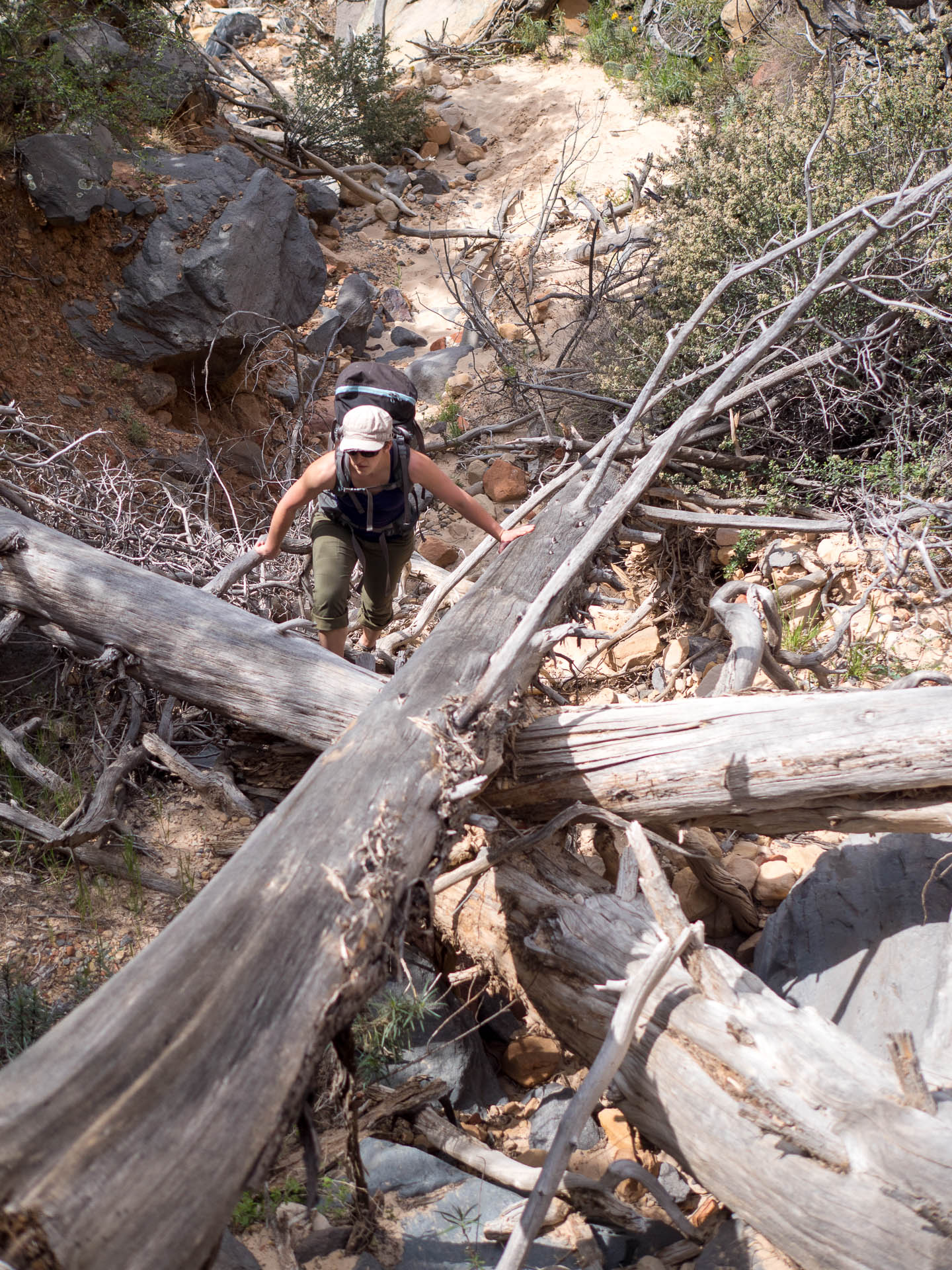 With only one short-lived misstep along the way, we climbed out of the streambed's path and made a beeline for Supercrack Tower, plainly obvious in front of us. The "trail" to it was a loose combination of dry dirt and frisbee shaped rocks that skated out from under our feet. It was often lost in thick foliage that painfully reminded me that the desert is not home to friendly greens. 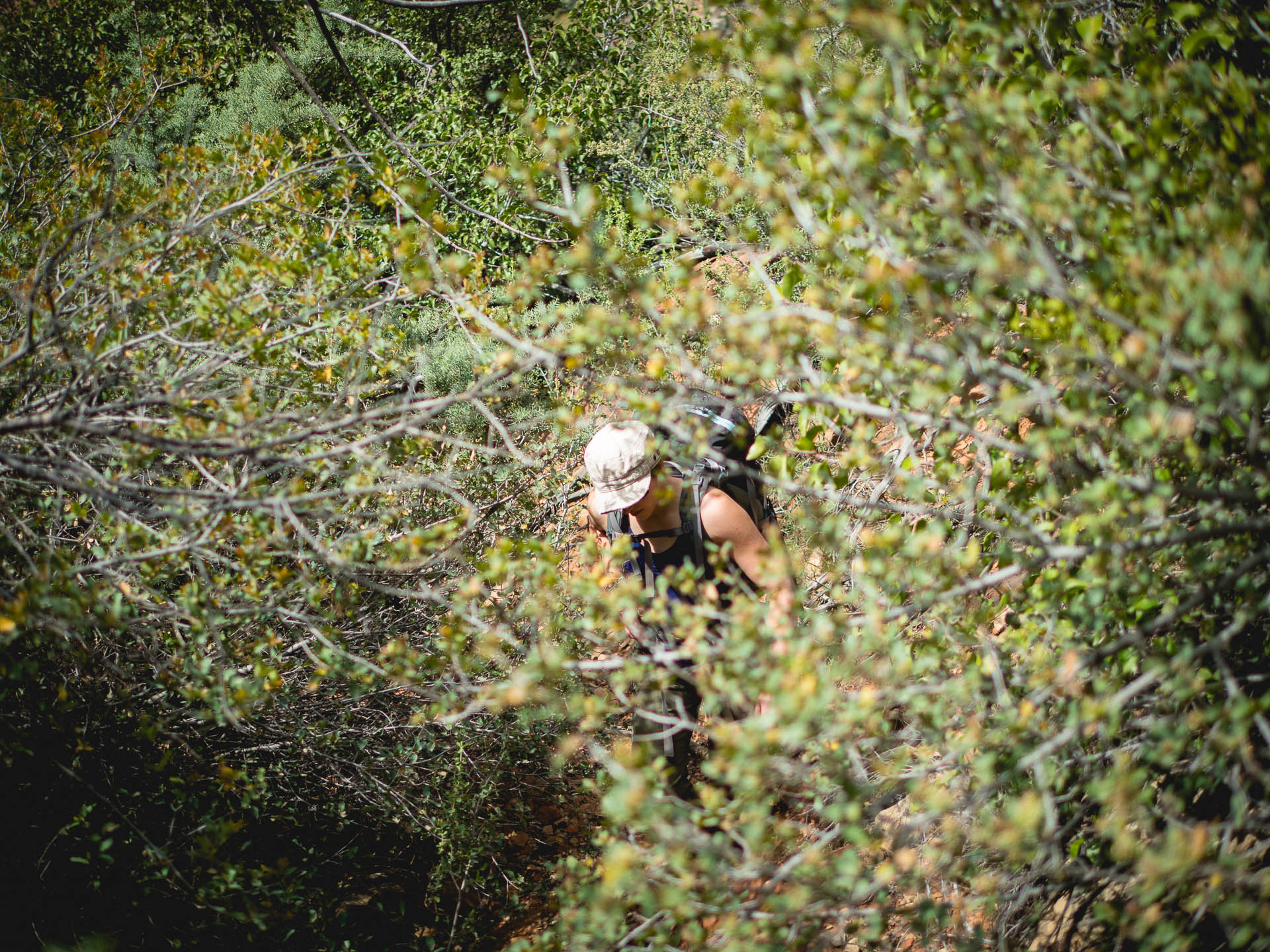 Still, it only took us maybe an hour to arrive at the base of The Windows Route. Things had gone much better than our last tower approach half a year earlier.

Windows Route has three pitches. The first was low angle slab. The second, the eponymous pitch, stemming through up a large "window" in the tower. The final pitch was offwidth.

Megan loves stemming, and I wanted to see how I stacked against a full pitch of OW, so it was clear who was doing what. I took a double rack up the first pitch only to discover that it was entirely bolted and almost nothing but balancy moves - moves made distractingly harder with all the hardware swinging around my harness. 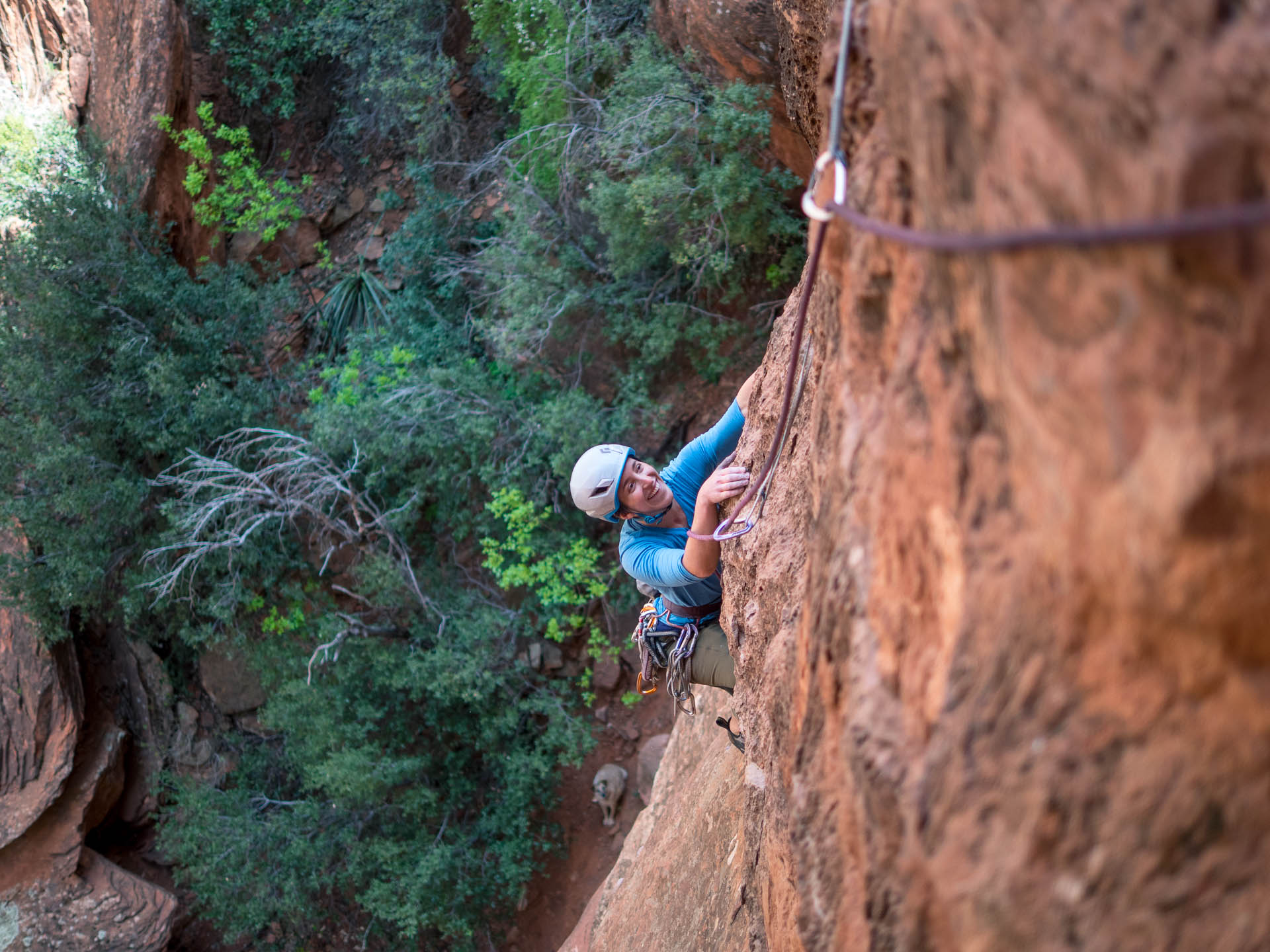 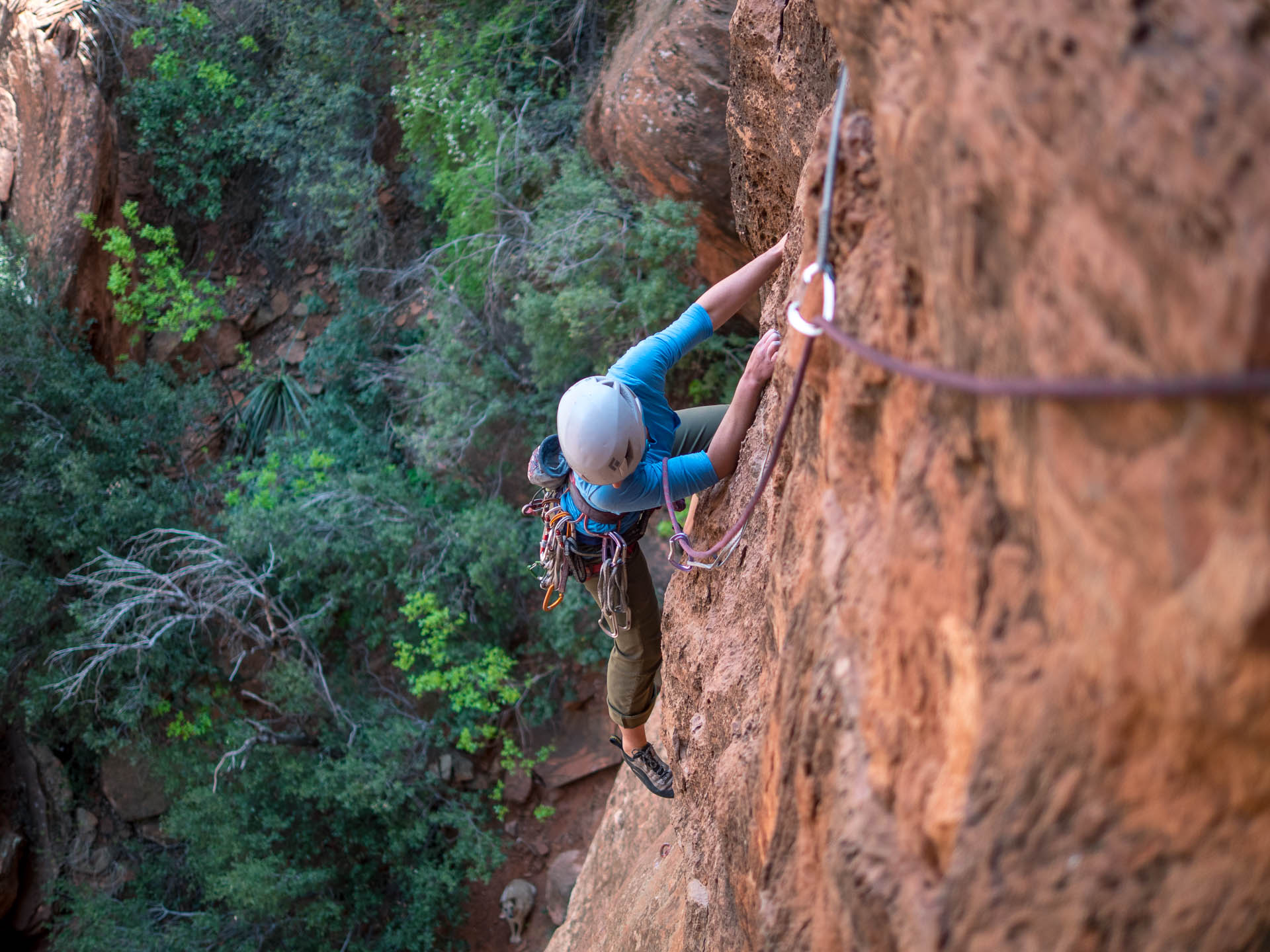 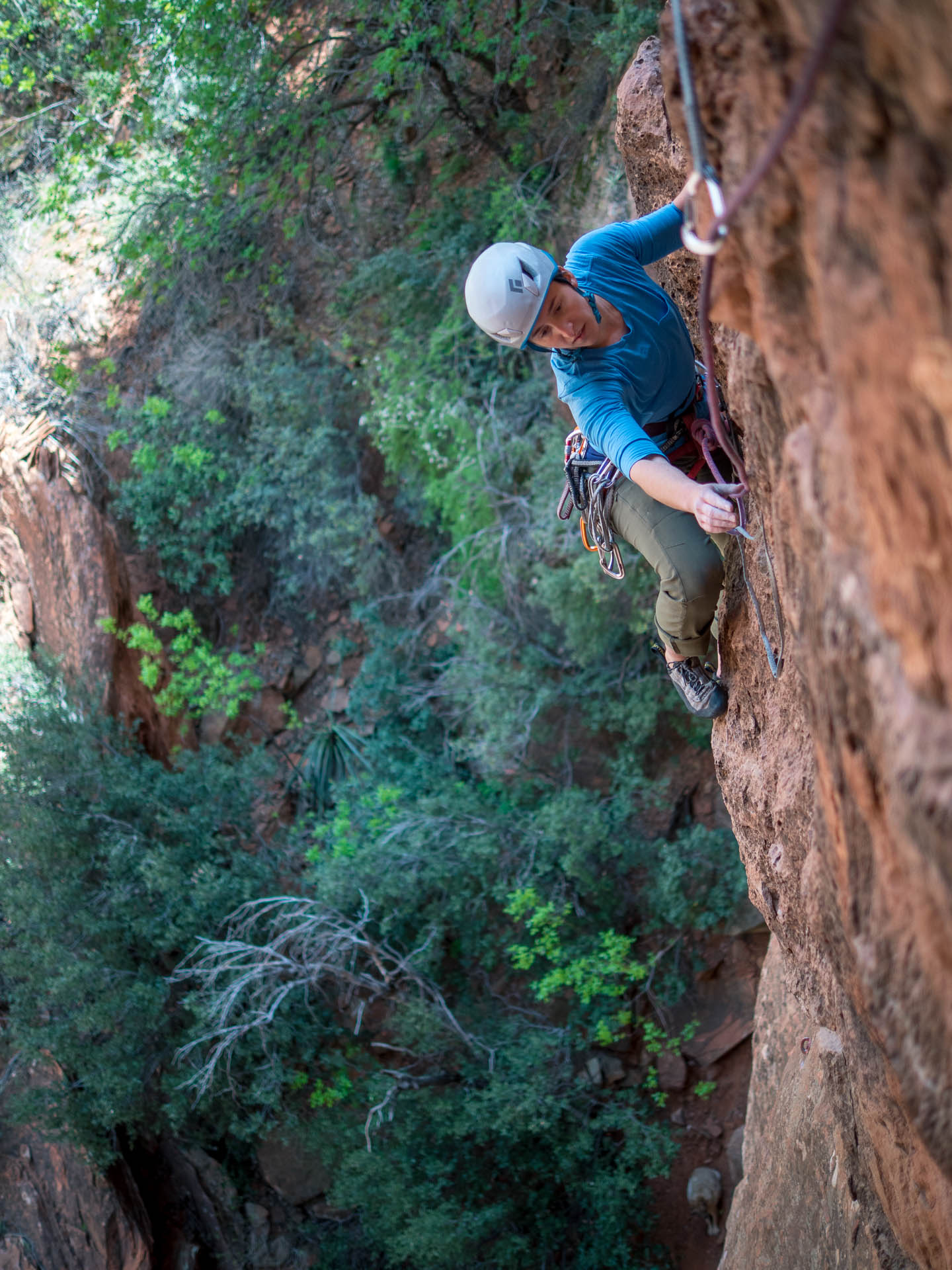 The final fifteen feet or so of the pitch was an unprotected diagonal traverse. I stuck in a teensy tiny .1 x4 to silence my monkey brain and eventually built up the courage to make a step to the anchor. It was just as gnarly to follow - Megan was looking at a pretty nasty pendulum splat if she blew it at the end.

Being Megan though, she did it with poise and style, "holding" onto the hidden slopers above her head while working through the low, technical feet of the traverse. 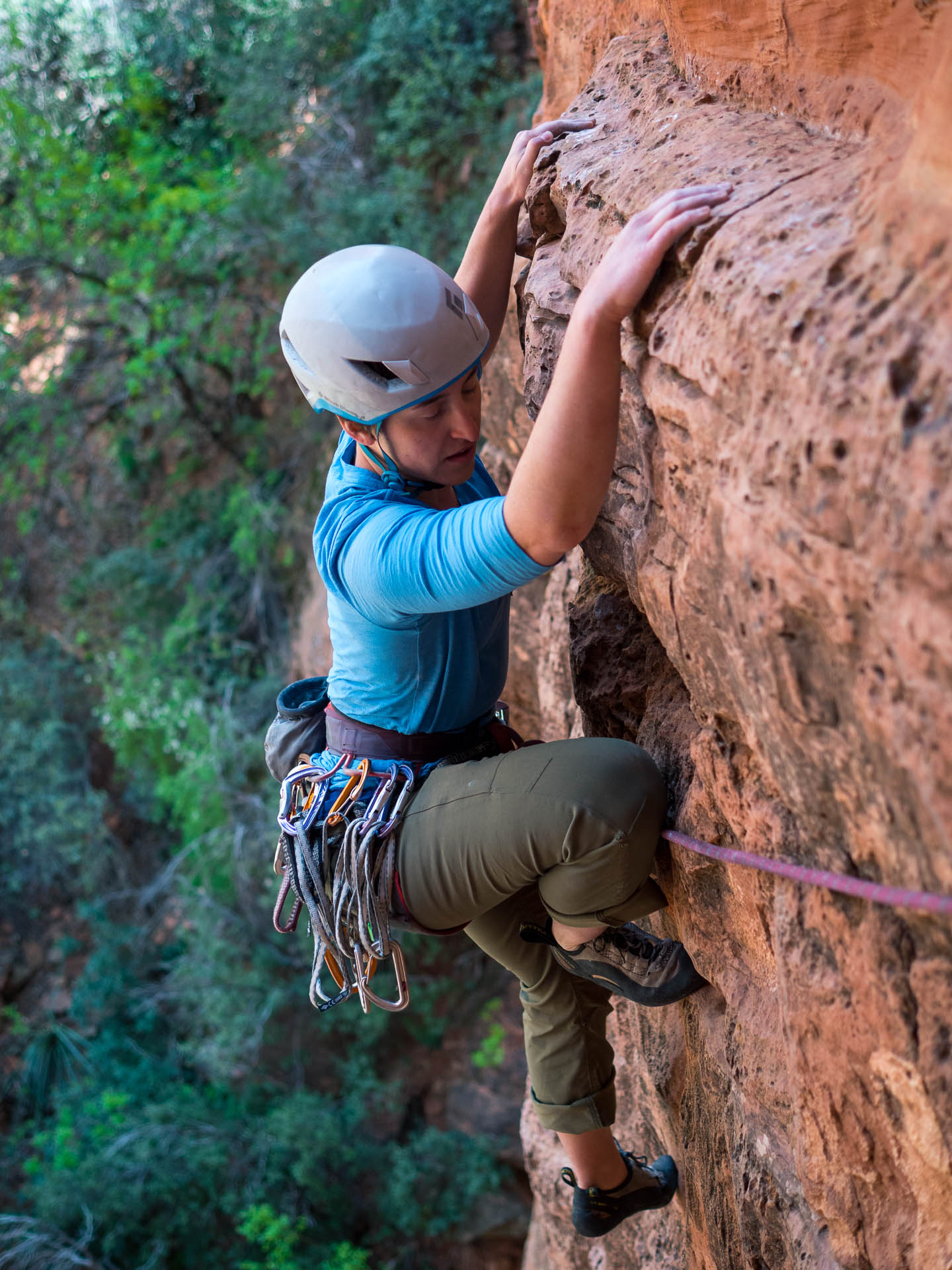 We were at the window. 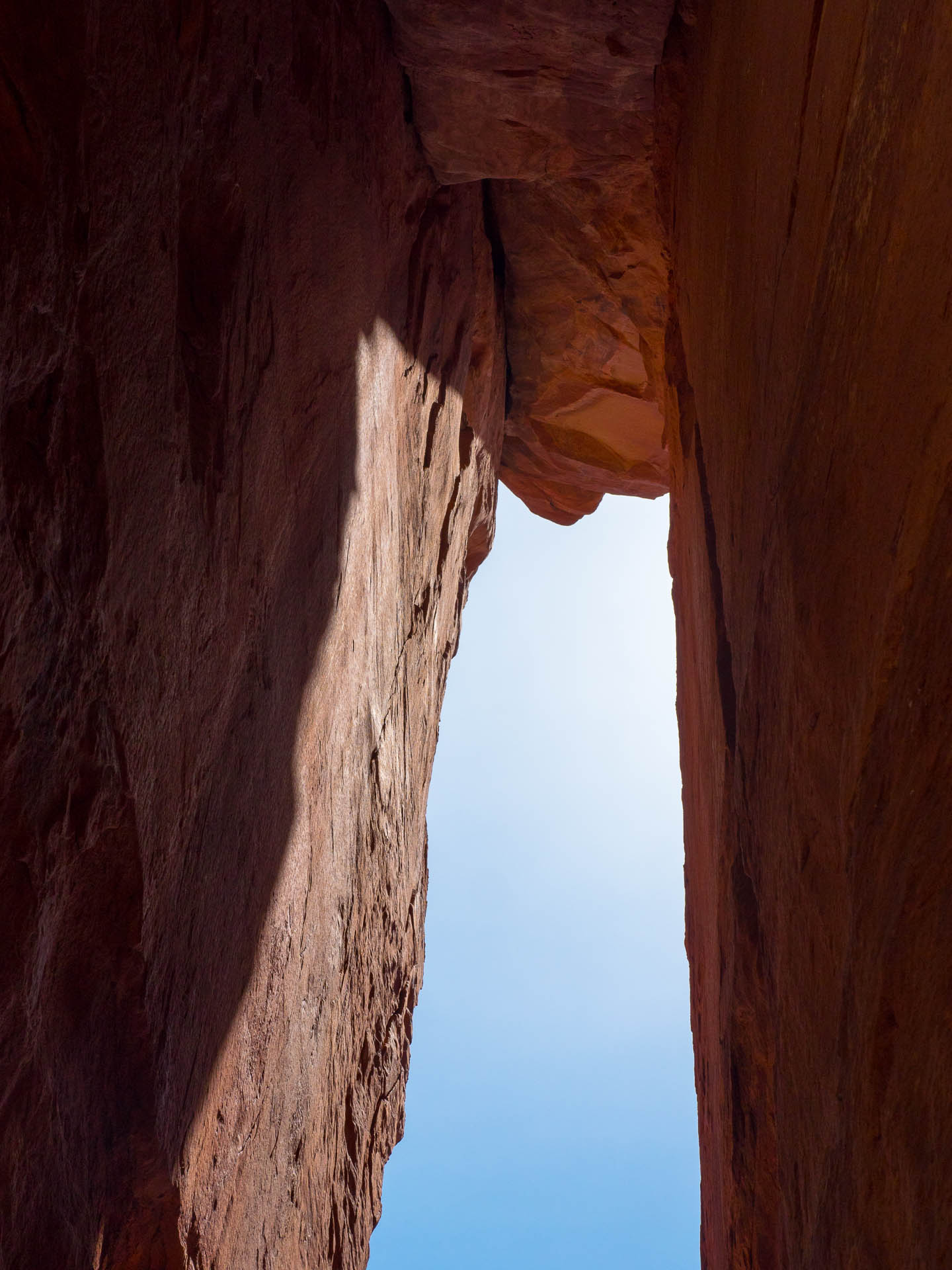 The pitch started on bolts that were just out of Megan's reach. I did my best to keep a straight face and she did her best to trick a quickdraw onto a bolt without having to put herself somewhere she could fall first. 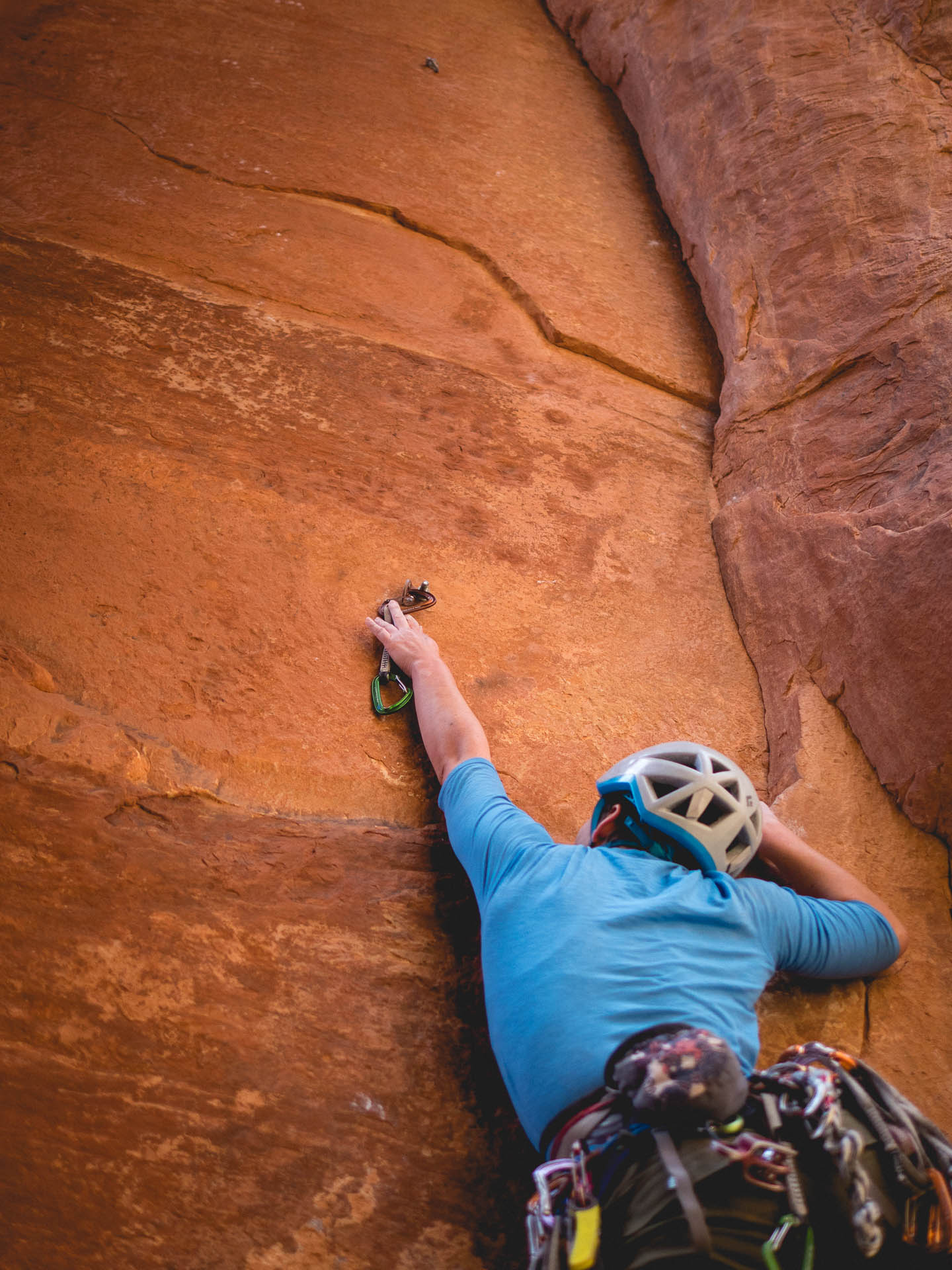 After a few abortive tries, Megan found her stride and stemmed her way up. The bolts disappeared as the roof drew near. Megan plugged small cams and swung out of the roof into a corner, following the crack to a hanging belay that marked the end of the second pitch. 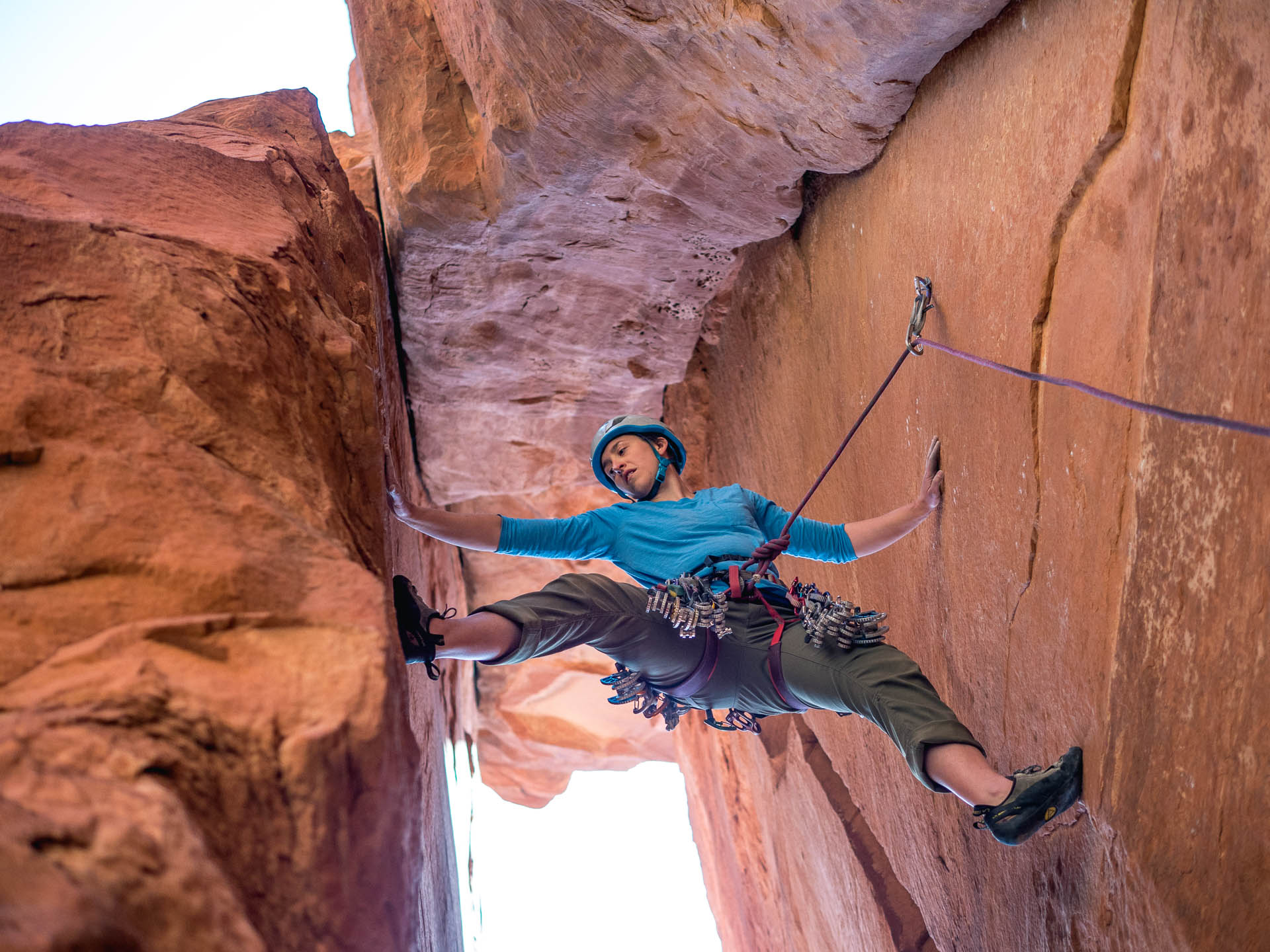 My hips felt like they were on fire before I was even halfway up the stemming start of the pitch. After I had awkwardly crossed out and into the corner crack above the window I received no reprieve from the (still awkward!) undulating thin hands jams that led me up to my hanging partner. 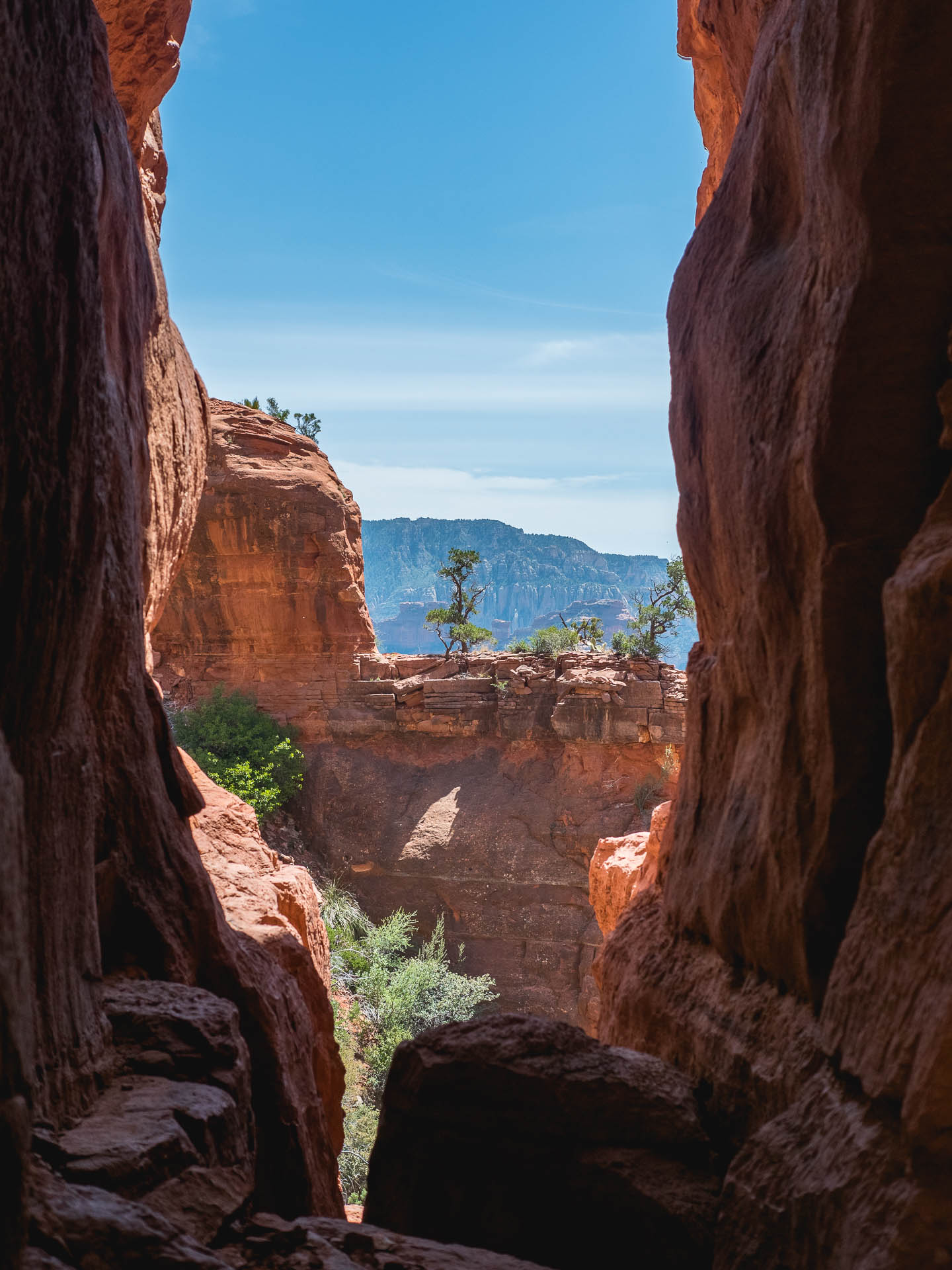 I left the camera behind, and started the final pitch of the route with two fist sized pieces as my largest protection. From the hanging belay a short fist crack (from which I back-cleaned the four I'd used to put myself on toprope) lead to a large ledge. Why the hell isn't the end of the second pitch here? I wondered.

And then I started the offwidth, entirely too trustful of Molly's words from the day before: "Yeah, it's offwidth, but you can protected it with normal sized gear in the back the whole way up. You don't need offwidth gear."

Let me tell you this now my friends. Listen, and listen well.

At least my climbing partner is an ICU nurse. She can get me out of here if things go bad, I thought. Then I thought about how she was hardly more than half my weight and that we were an hour from a trailhead, two pitches up a climb.

I moved slowly and with a lot of noise. I grunted and growled at the crux of the route, not knowing if it was the crux or not - but praying it was, because fuck, I cannot do something harder than this right now. I have no shame saying that all my manly noises were clearly tinged with fear.

From the top of the tower we could see all the way back to Midgley Bridge. We lay in the sun briefly before a cool spring breeze and empty stomachs convinced us it was time to go.