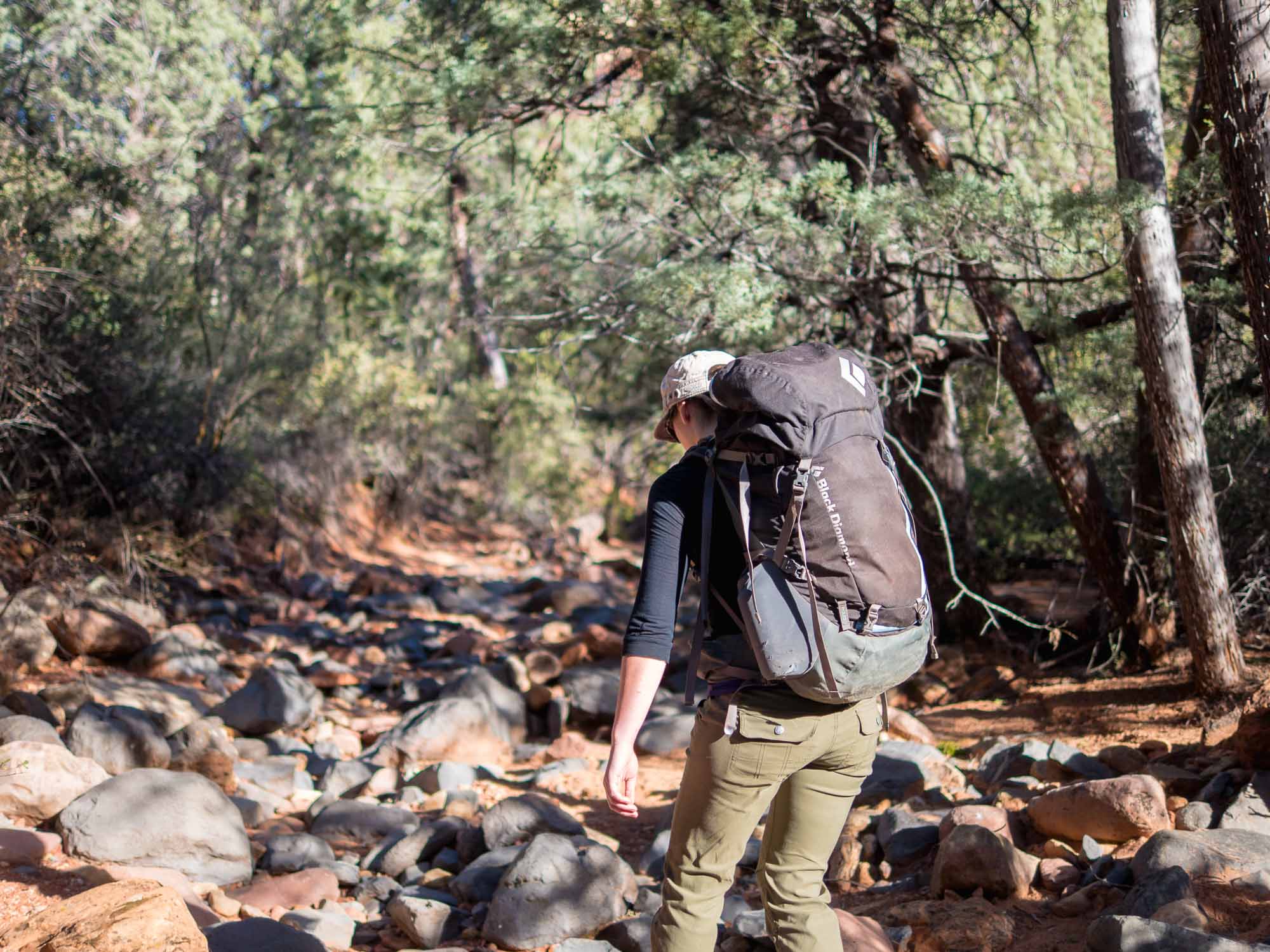 I called Megan from the side of a gas station by the Walmart in Yuma, Arizona. We made plans to climb something with more than one pitch in Sedona, but nothing more specific than that. Late at night, as I neared I-17, she texted "meet at 10 at Bell Rock parking." 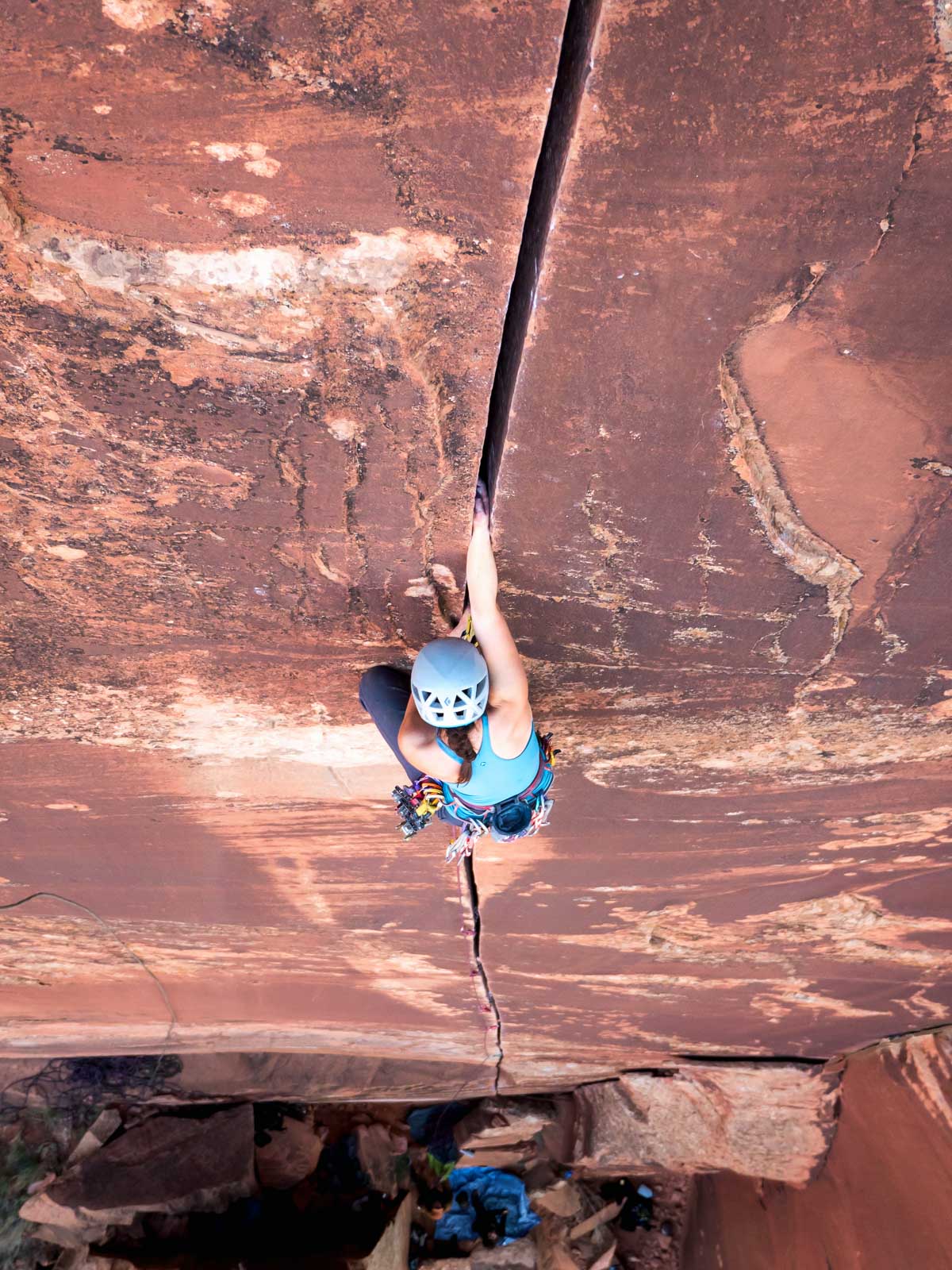 I woke up in a random bandit campsite off the interstate and punched it the rest of the way to Sedona. The Bell Rock parking lot turned out to be the lot for a major biking, hiking, and climbing trailhead. Geriatrics out for their daily stroll got to admire my shirtless bod as I wiped dirt off the solar panels with my T-shirt in the unbelievably mild mid-December weather of Sedona.

I daresay I was properly adorned again when Megan and her pup Juniper pulled up. She pointed out our climb, a desert tower clearly visible from where we stood by my van: Coyote Tower, 600' 6p 5.10. The tower stands at the right edge of the enormous Courthouse Butte, looking almost as though it was attached rather than a completely separate entity. I assure you though, it is. 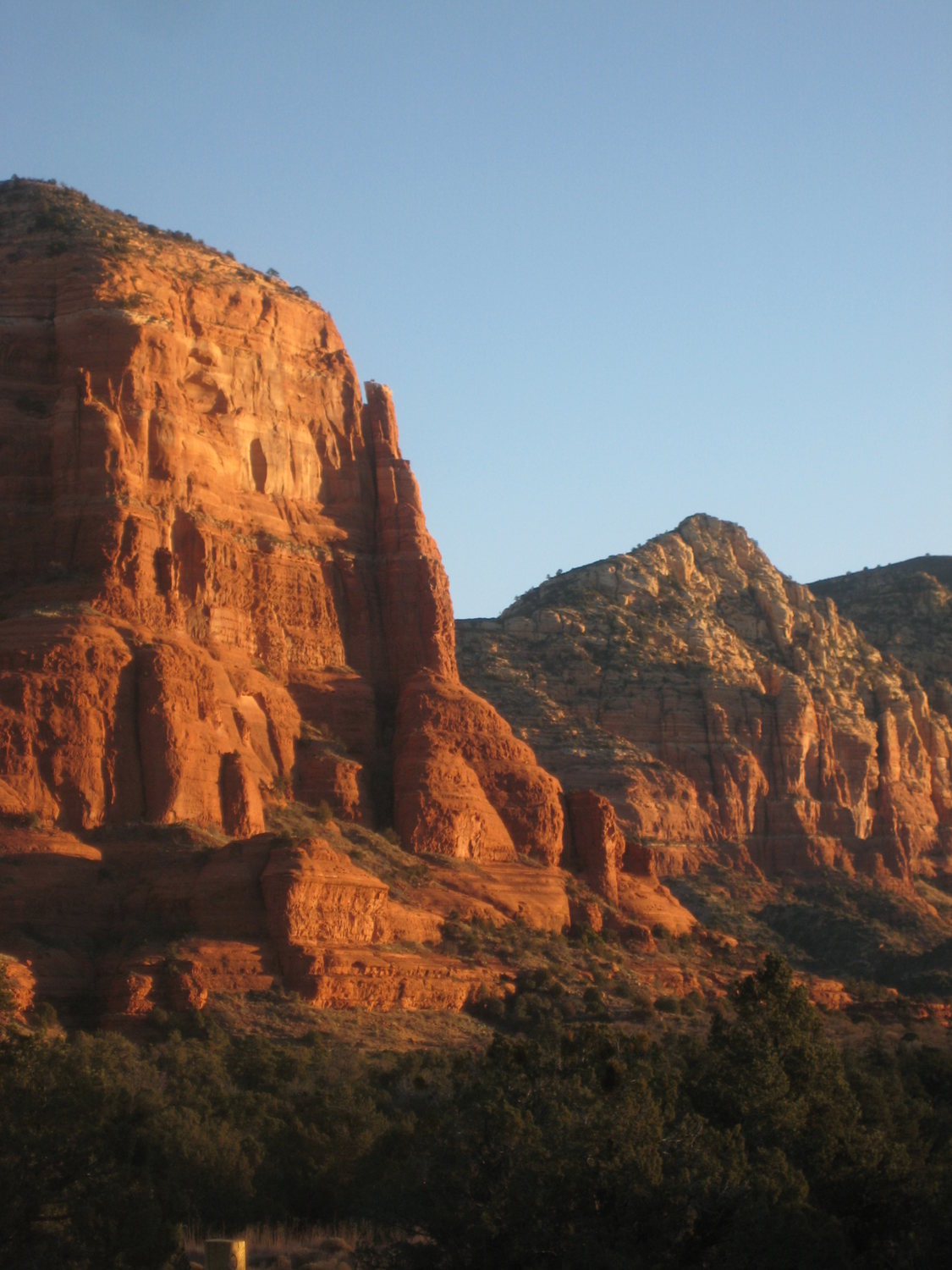 A long hike took us to the base of the route, where two young fellas from Phoenix were racking up. Megan, Juniper and I lay down in the sun to wait our turn. 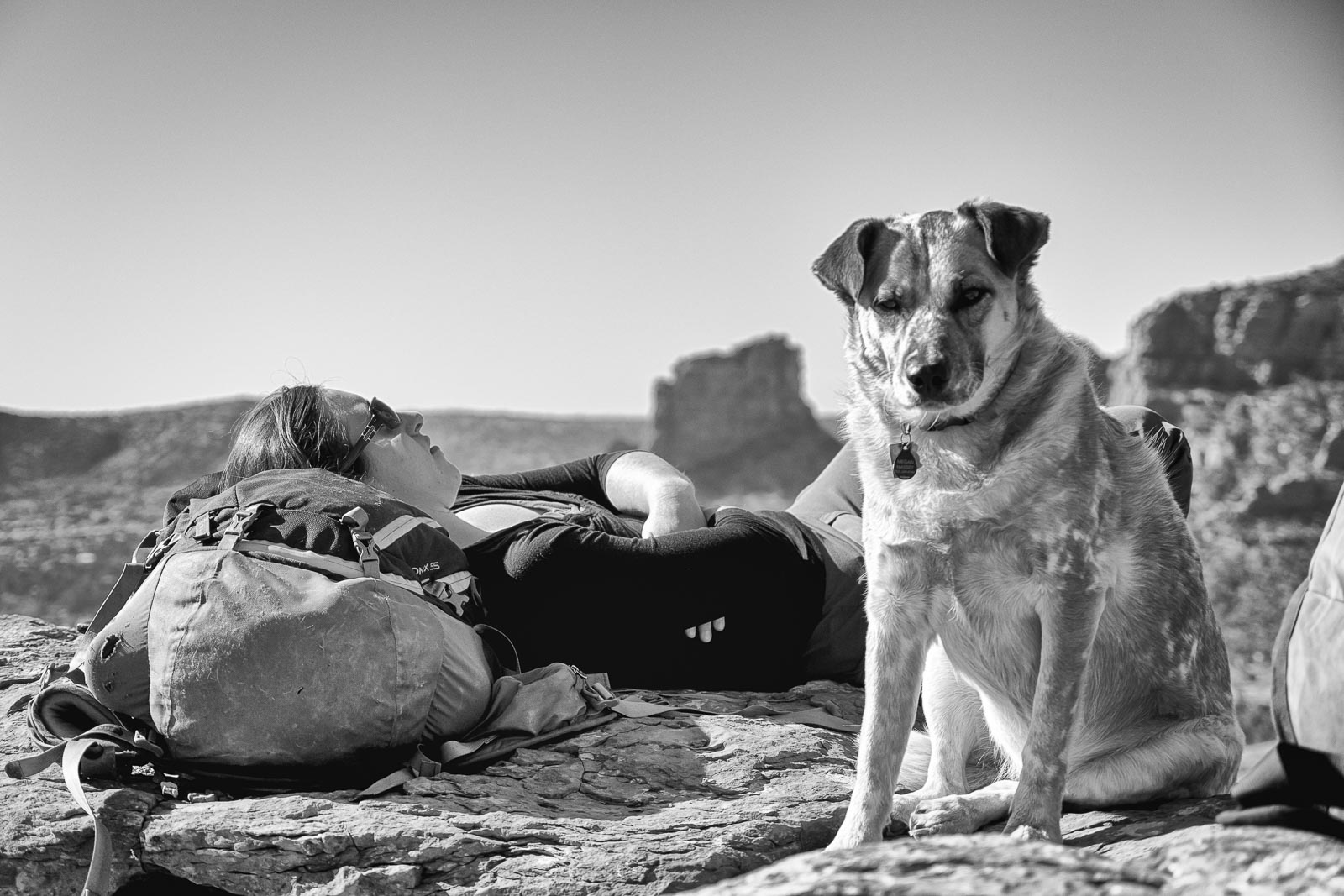 The sun naps continued throughout the afternoon. We caught up with the guys after every pitch - even when we waited long enough for them to link two together - but thankfully each time we caught them we had soft, sun-warmed sandstone to rest on.

Megan laughed as she cleaned my buried gear - the "number one of terror" and the "seven-five of desperation" - from the overhanging thin crack of the second pitch while she casually seconded it with her lady paws. When we caught the guys a little bit later ("Wow, you guys are really fast," they exclaimed) we had our first hint of what sort of a day we were in for.

The sun was having strong urges to set as Megan slapped the chains at the top of the sixth pitch.

Thanks to the extra few hours the guys in front had added onto our outing we were both feeling "the hungers". We simul-rapped as much of the route as we felt safe doing so on and put feet on solid ground just as the sky was catching fire and Sedona turning to nothing more than a series of lamp posts and house lights below the horizon. 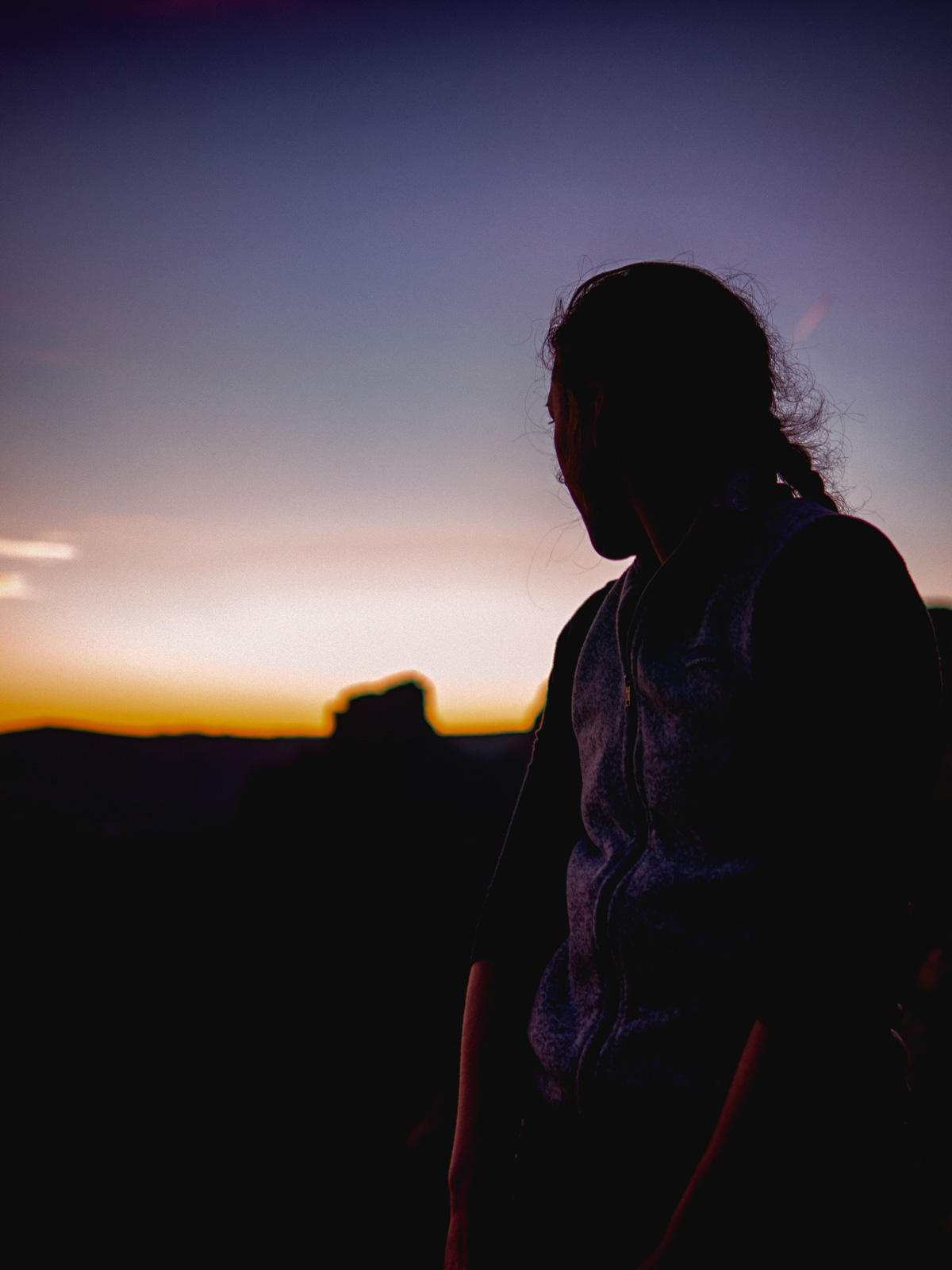 We missed a turn on our way back to the lot and added maybe half an hour to the already long return trek. I didn't mind. The cool night's air had me giggling. How preposterous to have had such a great day of climbing in the middle of December. Walking under the stars in that refreshing air after having climbed a 600' tower with a new friend, well. A perfect day.

Looking up from laying our packs down on the asphalt beside our cars, we could see headlamps bouncing down the tower. Those two Phoenix guys were still coming down. The poor bastards.

A few drinks in at the birthday party of her just-turned-21 roomie, browsing through the black-and-white Sedona area guidebook, Megan and I lined up our next adventure: Earth Angel, 700' 5.10-. It's billed as a true Sedona classic, replete with rotten sandstone and an approach you will definitely get lost on.

The approach took the meandering path of a dry riverbed. We hopped from smooth riverstone to sandy earth and back again and did our best to keep an eye out for the forking trail off the riverbed and up to the tower. 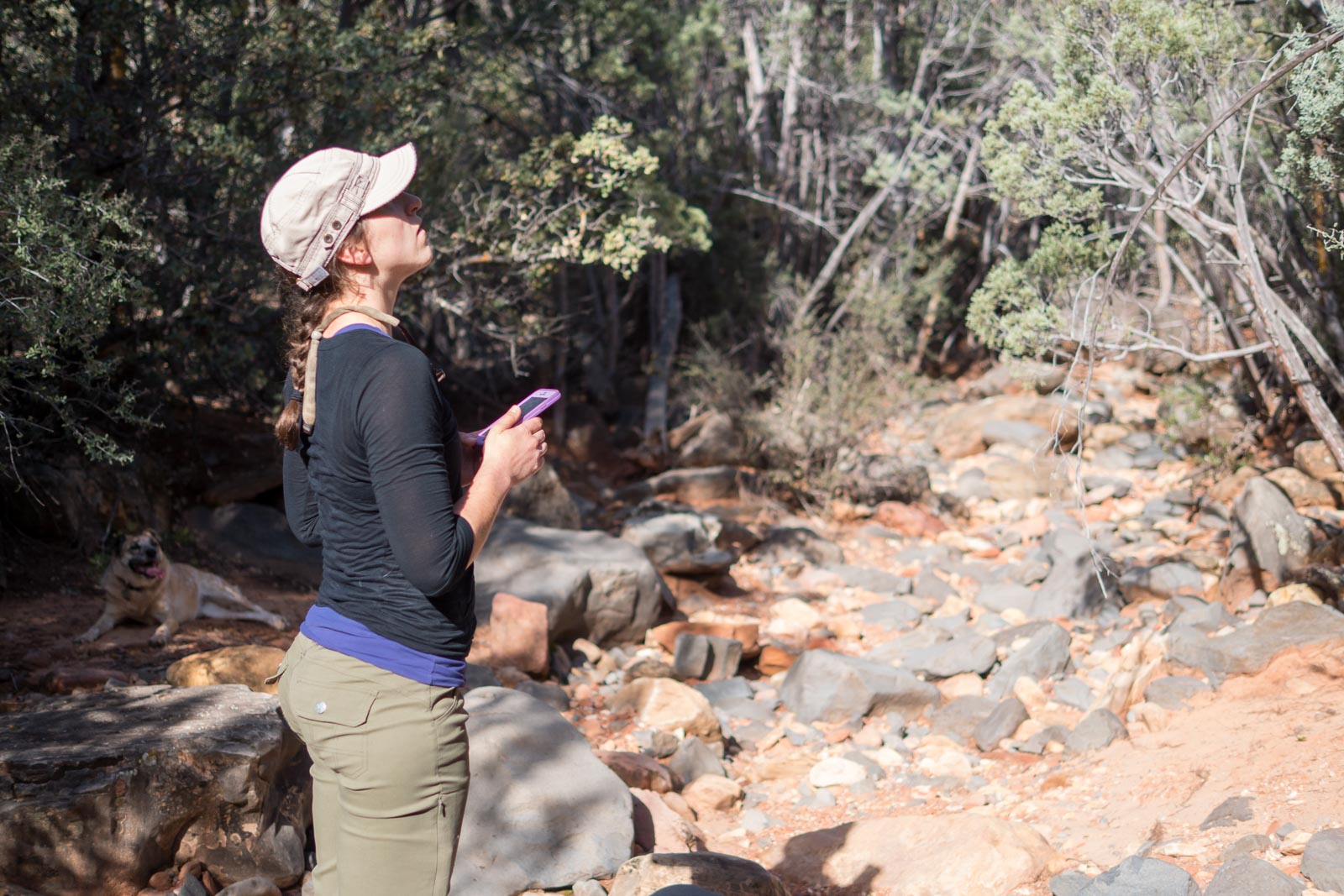 An hour into the hike, nervous that we had missed our turn, we committed ourselves to false cairns and ended up bushwhacking up loose gullies and through thick vegetation. We took turns fighting up steep earthy ravines in the same way I might pause to let a friend get clear in avalanche terrain. But then, when I'm crossing dangerous landscapes on my skis I don't have to simultaneously worry about cacti.

On our way out, following the trail down, we would discover that we had undershot the actual path up by perhaps twenty feet.

The route was quite the adventure. The first pitch was a face climb that took maybe four pieces of gear, of which only one seemed like it might actually do something for a falling leader. I was grateful for all the mental preparation soloing in J-Tree and simuling up Red Rocks had given me.

Megan swapped for pitch two, fighting through a long chimney that became progressively sandier and, eventually, totally incapable of not exploding gear in the case of a fall. Megan just didn't bother placing for the length of the rotten finish.

Forty feet above my last piece on pitch three, the sandy discs protruding from the low angle wall, and upon which I was tiptoeing, exploded. I screamed like a child and held on with all my might to the tree I had just wrapped my mits around. After a shocked moment I realized I hadn't taken the plunge and scooby-doo'd my feet up to the ledge the tree was rooted on, giving silent thanks to Richard Feynman.

Megan cruised the actually fun and not super scary fourth pitch: hands and thinner in a corner with very fun patinaed holds along the way. Following her up, I was delighted to not only be unafraid (even vicariously!) but to actually be enjoying myself in the moment. The other pitches had so far only been fun when they were over and I was anchored into something solid. 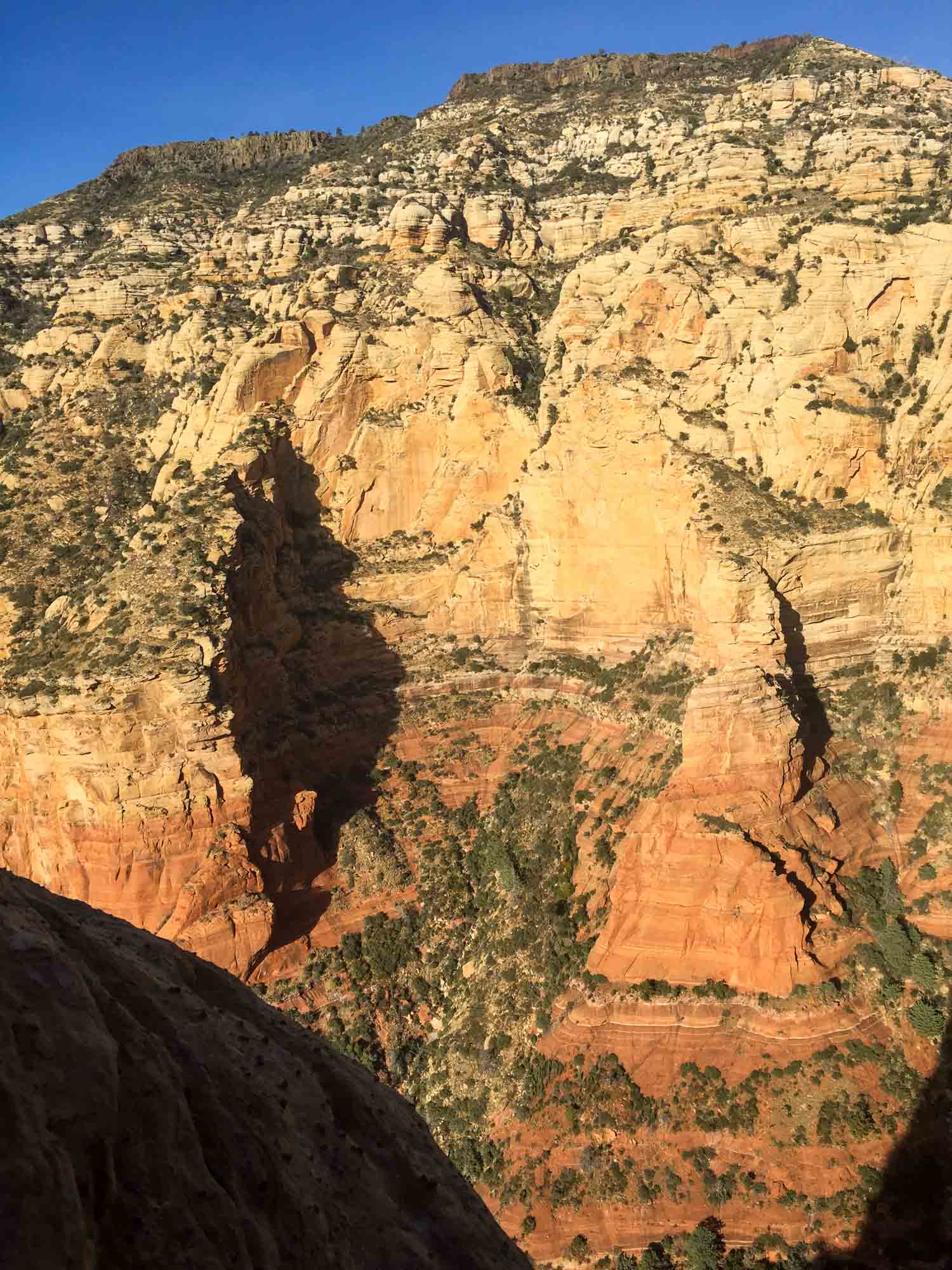 Pitch five was on me, and I was once again scared like a wee lad as the thin crack system I'd been climbing closed down, refusing to take any more protection or give me a secure hold. I moved very, very slowly past a piton over bald sandstone slab. The slab evened off to a sloping ledge that offered large chickenheads to finish the route on. Not that I could fall at that point, but it definitely would not have been a good thing.

Five ended on a false summit, maybe a thousand feet above flat earth, and for the first time since the morning we got to feel sunshine on our skin. We passed a short respite smiling in the sun and looking out at the expansive range of Sedona's sandstone buttes and towers spreading horizon to horizon before the Megs finished up the climb with a short, winding sixth pitch to the tower's true top. 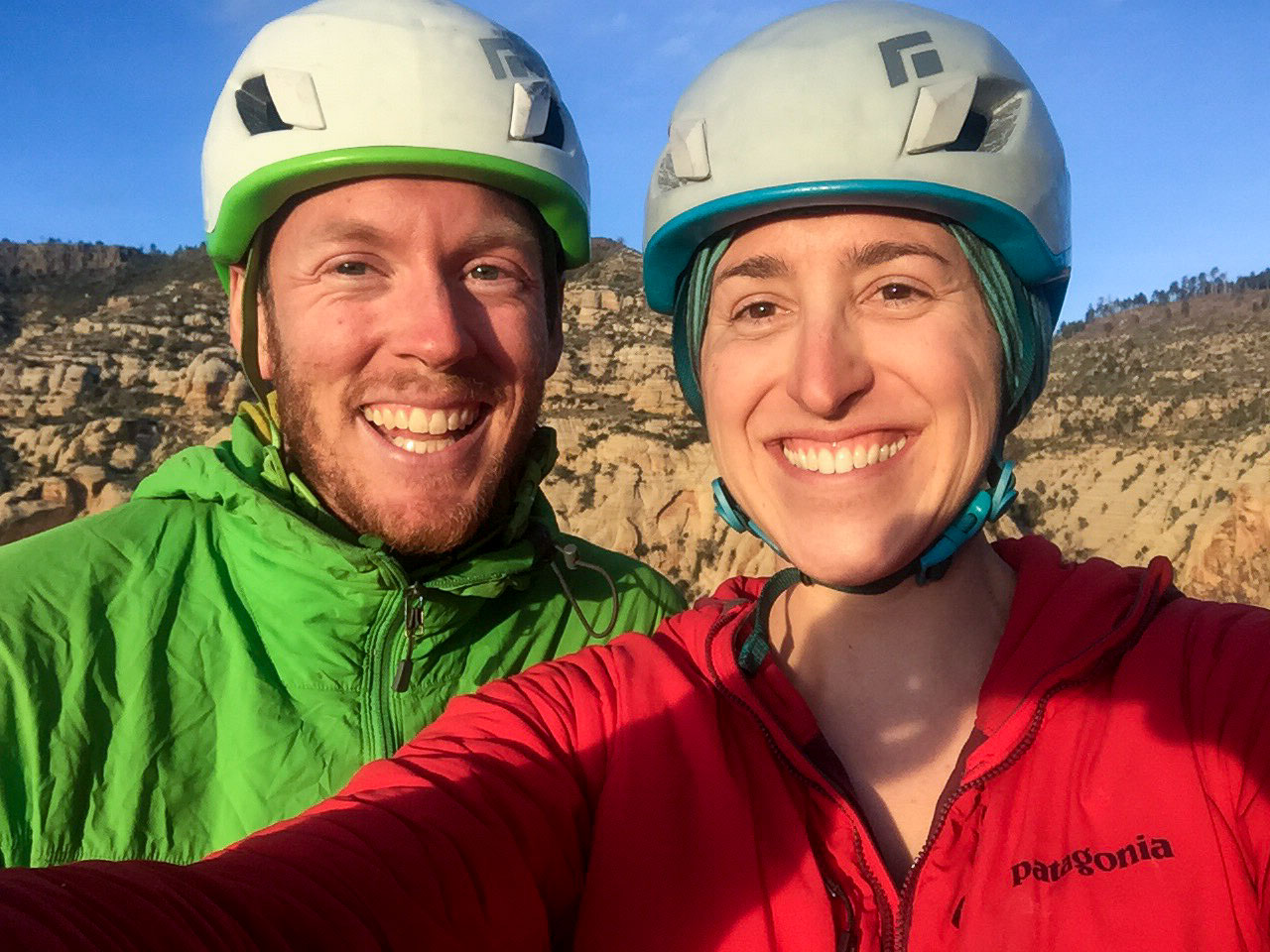 Megan taught me a new trick on our way down the opposite side of the tower: to move the knot of your rappel past the lip of the ledge you're standing on to make sure it doesn't get stuck. With that and Megan's general tower-escaping competence, rapping in the dimming light passed without incident. Juniper was ecstatic to see us, and we were ecstatic to eat some PB&Js on the cold ledge at the base of Earth Angel. The steep hike down to the riverbed was adventurous, but once we made it the riverbed itself was just a lovely environs for basking in post-adventure glow and having the talks one does when getting to know someone you've already trusted your life to.