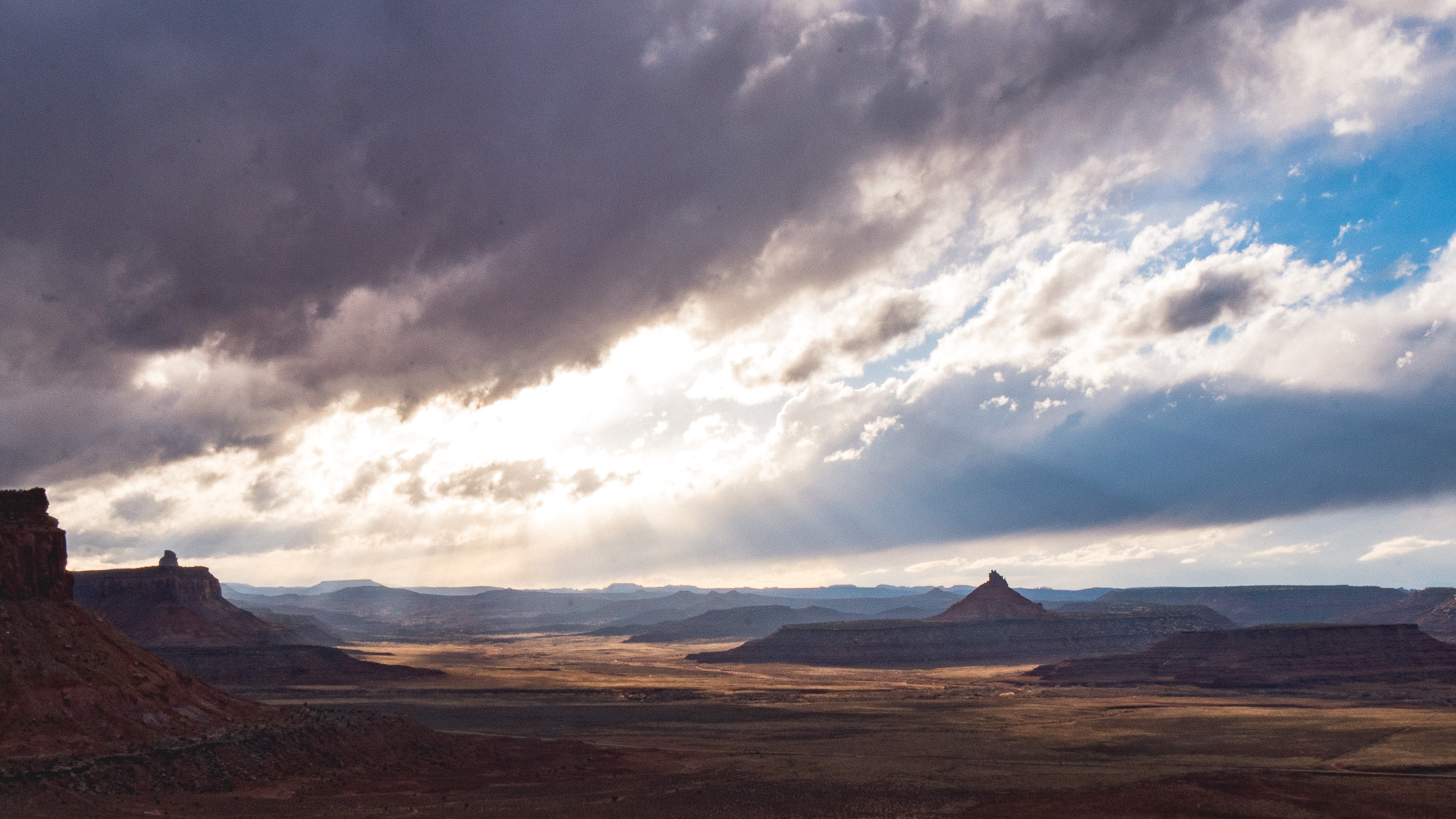 I had some things to attend to before I disappeared into the internet free lands of the Creek, but luckily Brittani and Thomas were around to keep me company in Moab.

I suckered them into driving out for a day of pre-Creek splitter training at Maverick Buttress. 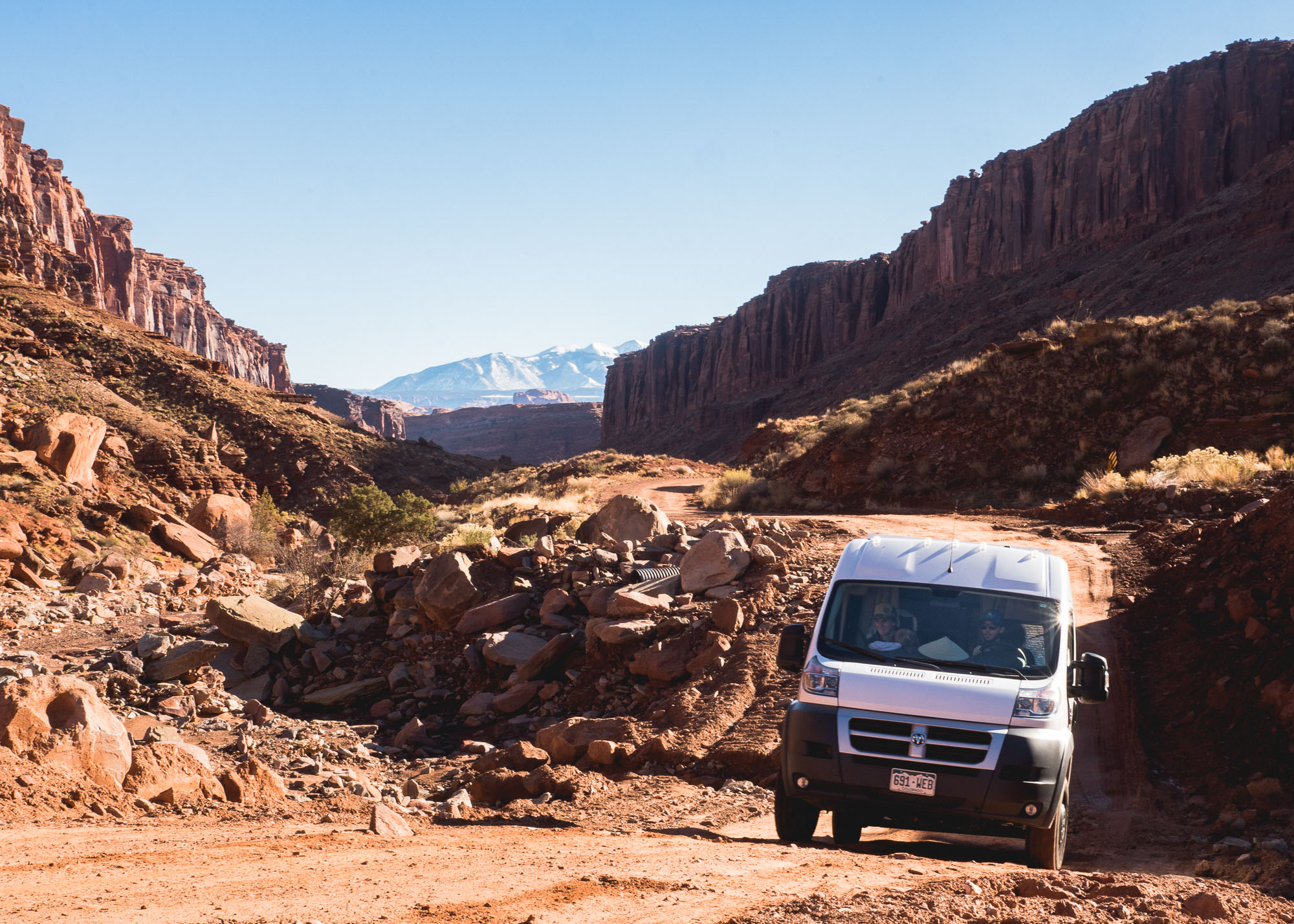 The view was stupendous, and I sent my hardest gear onsight, Tequila Sunrise (10d) - though I broke that record the very next day.

Afterwards I drove into the Creek, and reunited with my perennial Creek family over at Hamburger Rock: Nate, Emily, Matt, Reese, and Link (aka Jack) were all already there.

On my first day with the crew we set up base camp on an Aslan stone at Broken Tooth. We sorted and stacked all of our cams on the rock, and realized that we had well over $10,000 worth of aluminum piled at our feet. 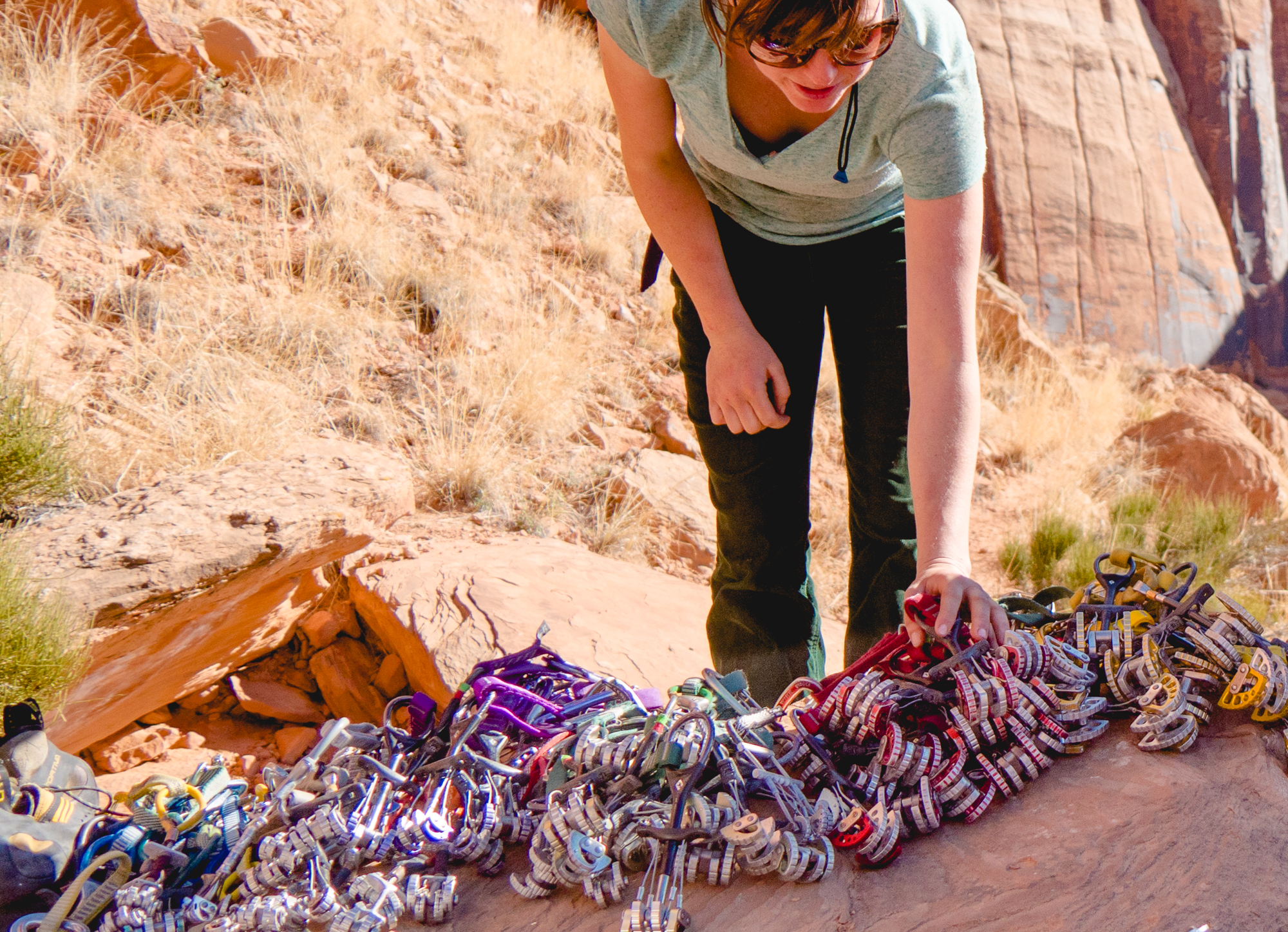 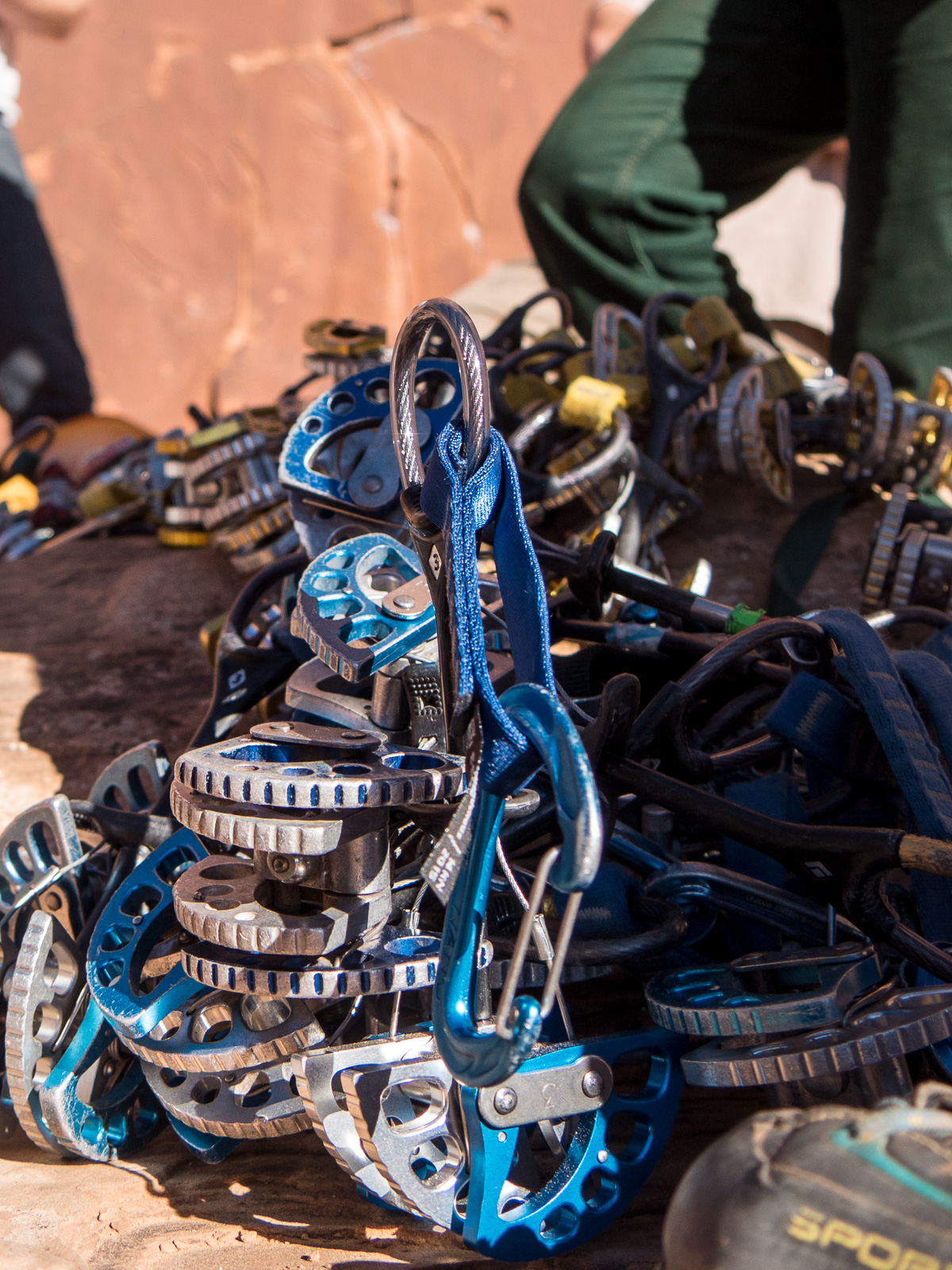 Back to Broken Toof!

Mr. Steele and I started the day on Dental Floss Tychoon, a 150 footer which finishes with the simultaneous climbing of a finger crack and an offwidth crack. Very cool.

Steele was then kind enough to belay me on Golden Crown (11-) (formerly "Unnamed Handcrack"), which succeeded Tequila Sunrise as my hardest gear onsight. More than the send itself, I was proud of the moment when every part of my body told I was going to pop, and will alone kept me on.

I took a lunch break and caught up with everyone over at Broken Tooth, where a single photo captures the radness of the crew pretty well: simultaneous ascents of Broken Tooth and Dentist's Chair. 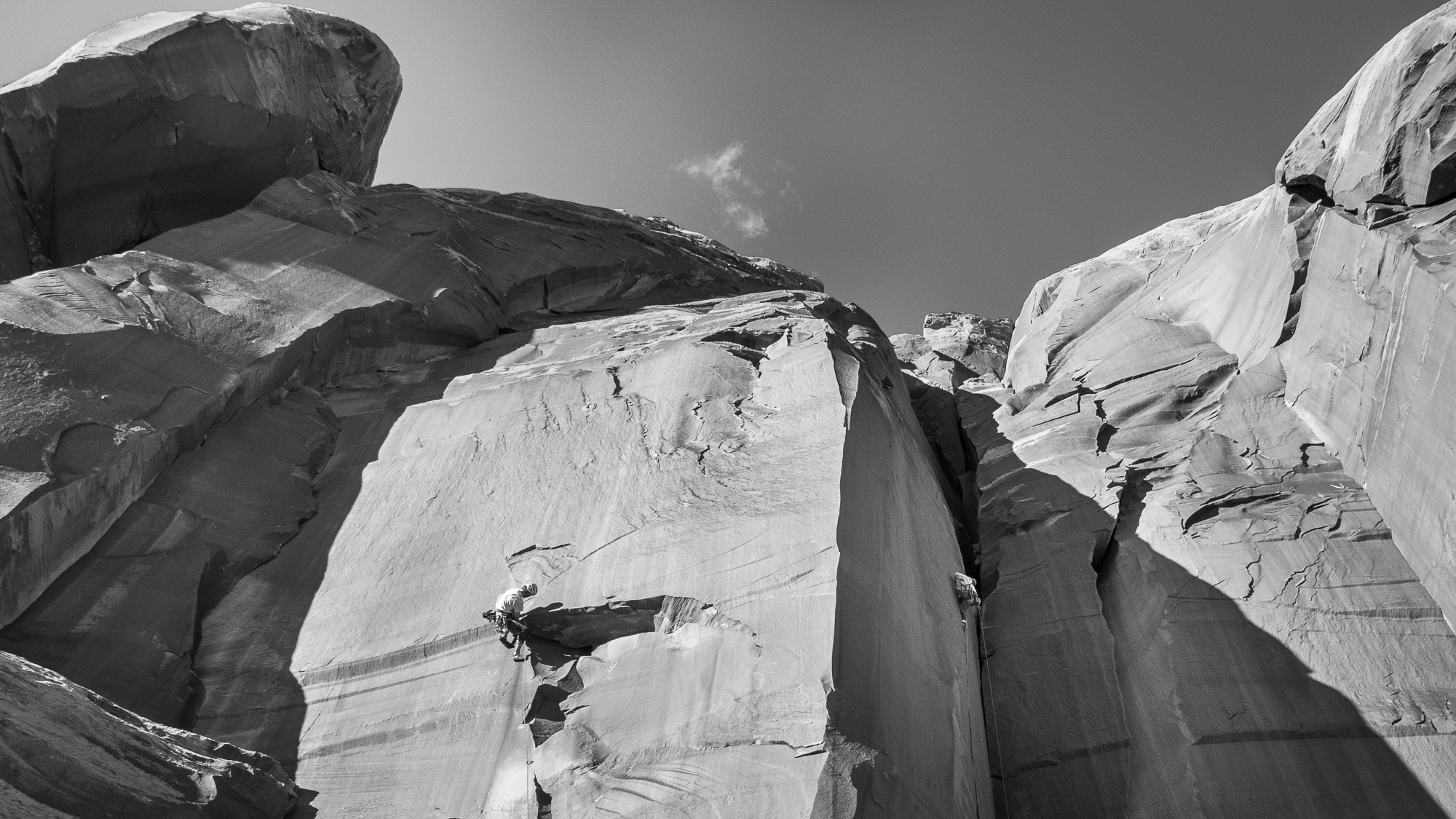 Nate got shut down by an amazing, and I mean amazing, bout of Murphy's Law, but Steele... well. 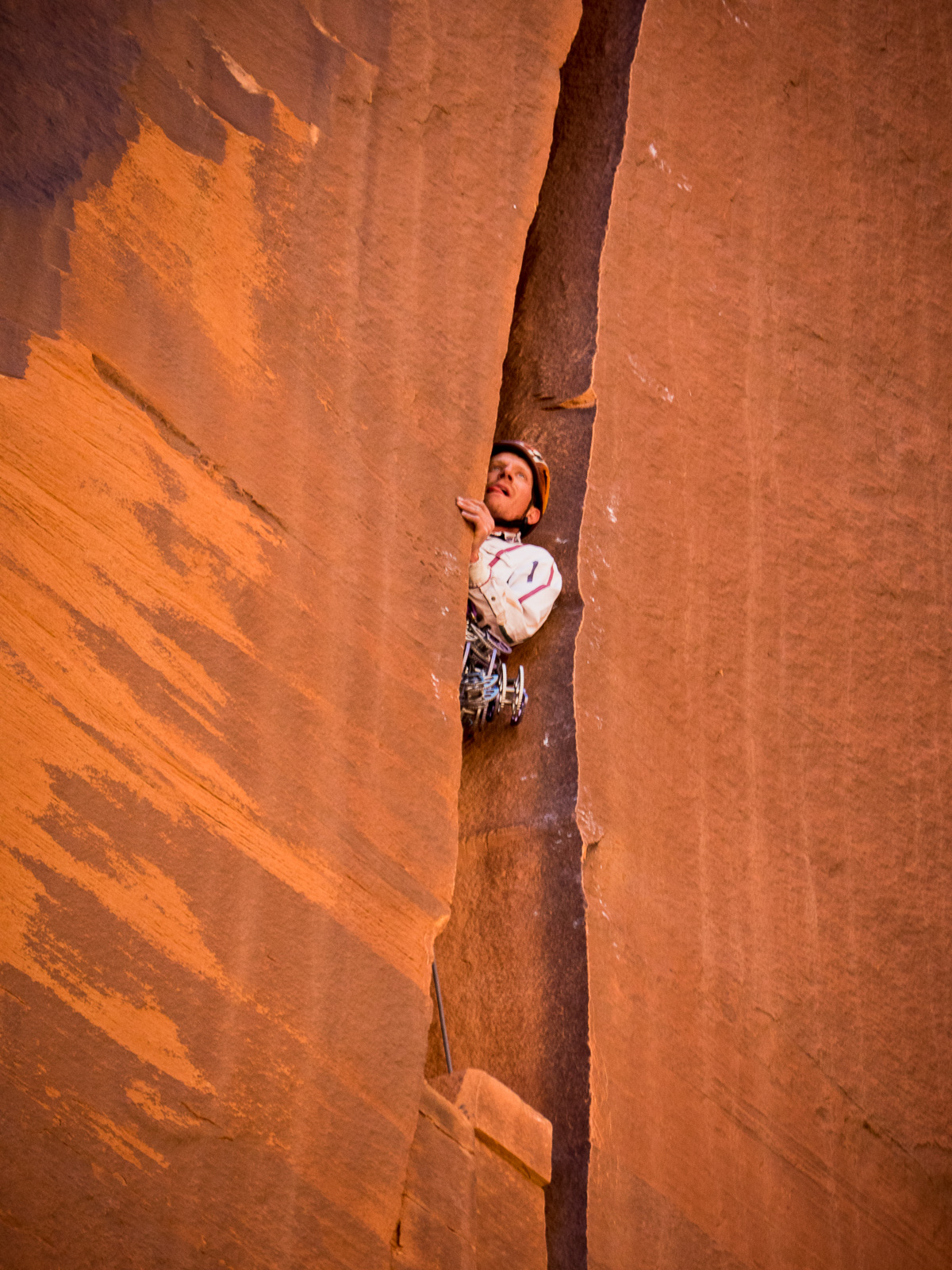 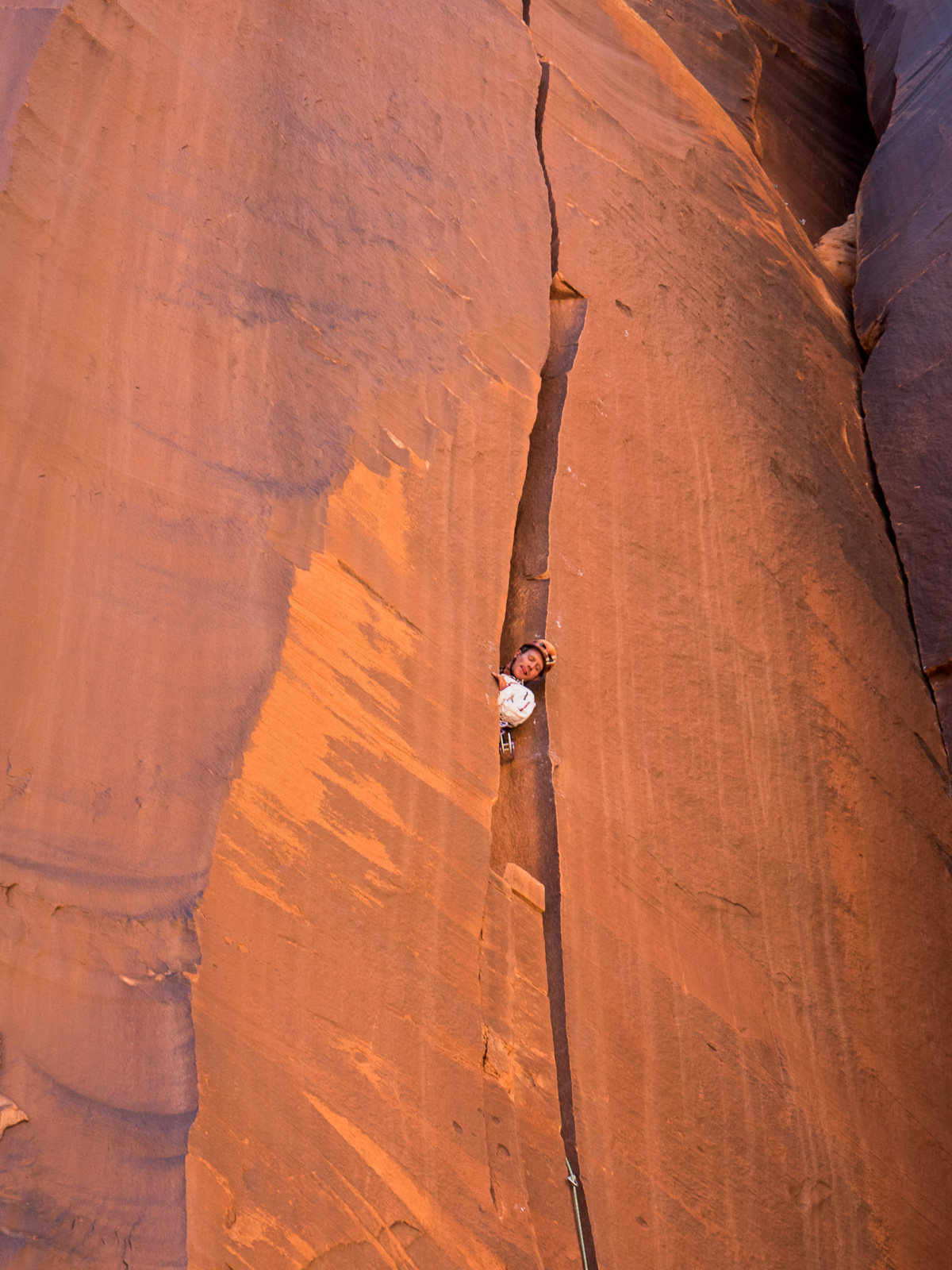 Steel didn't get shut down, even though his body did. The man bonked 40 feet from the anchor and finished anyways. He rappelled to earth and came back to us a broken man, a shell of what was. Ropes still taut through his ATC, he lay in the fetal position and made no move to rise for a solid ninety seconds. 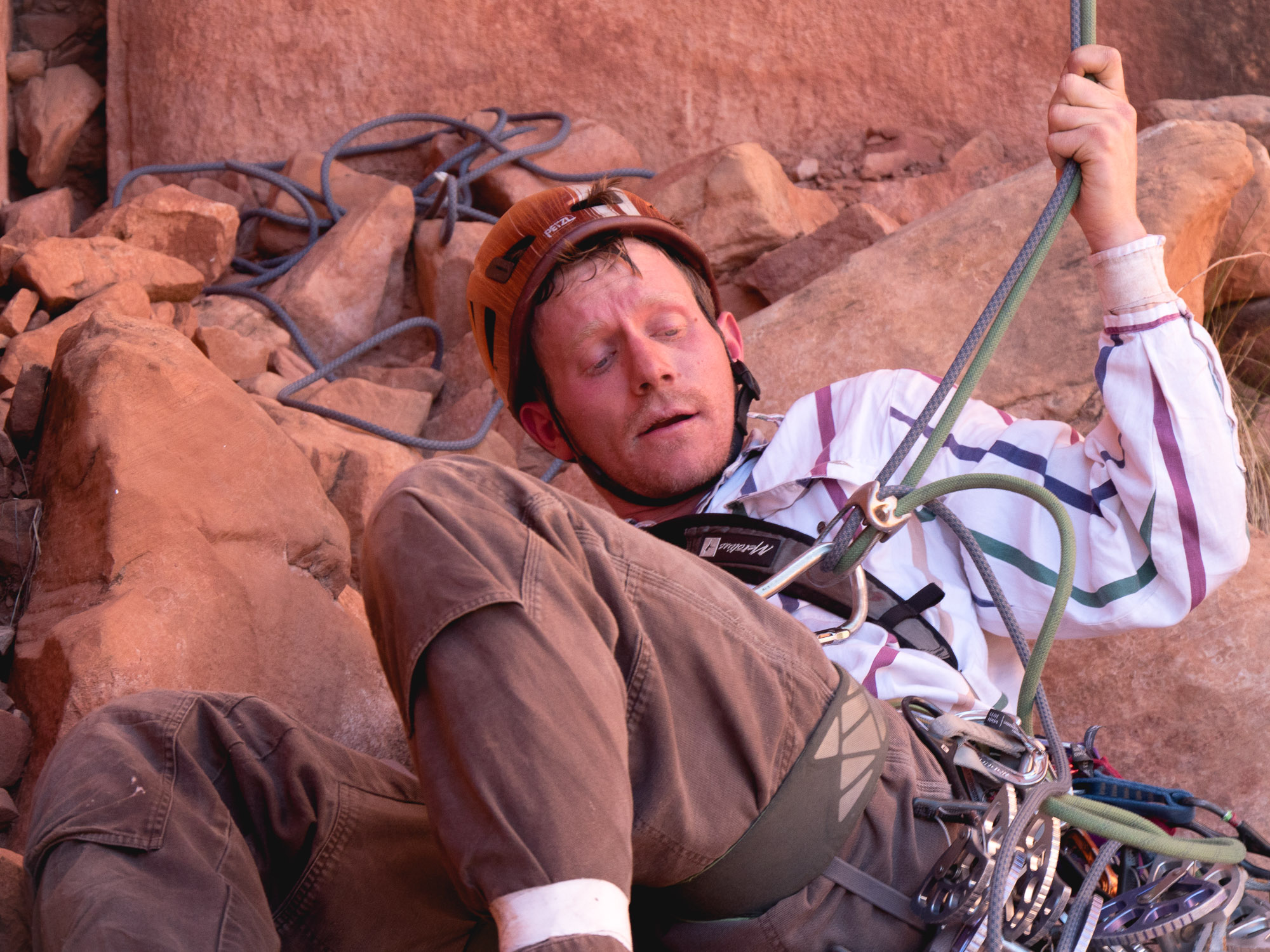 Somebody get that man a hamburger, stat.

Anyways, he recovered eventually, and here's a photo of Jack in front of the sun looking cool and stuff. 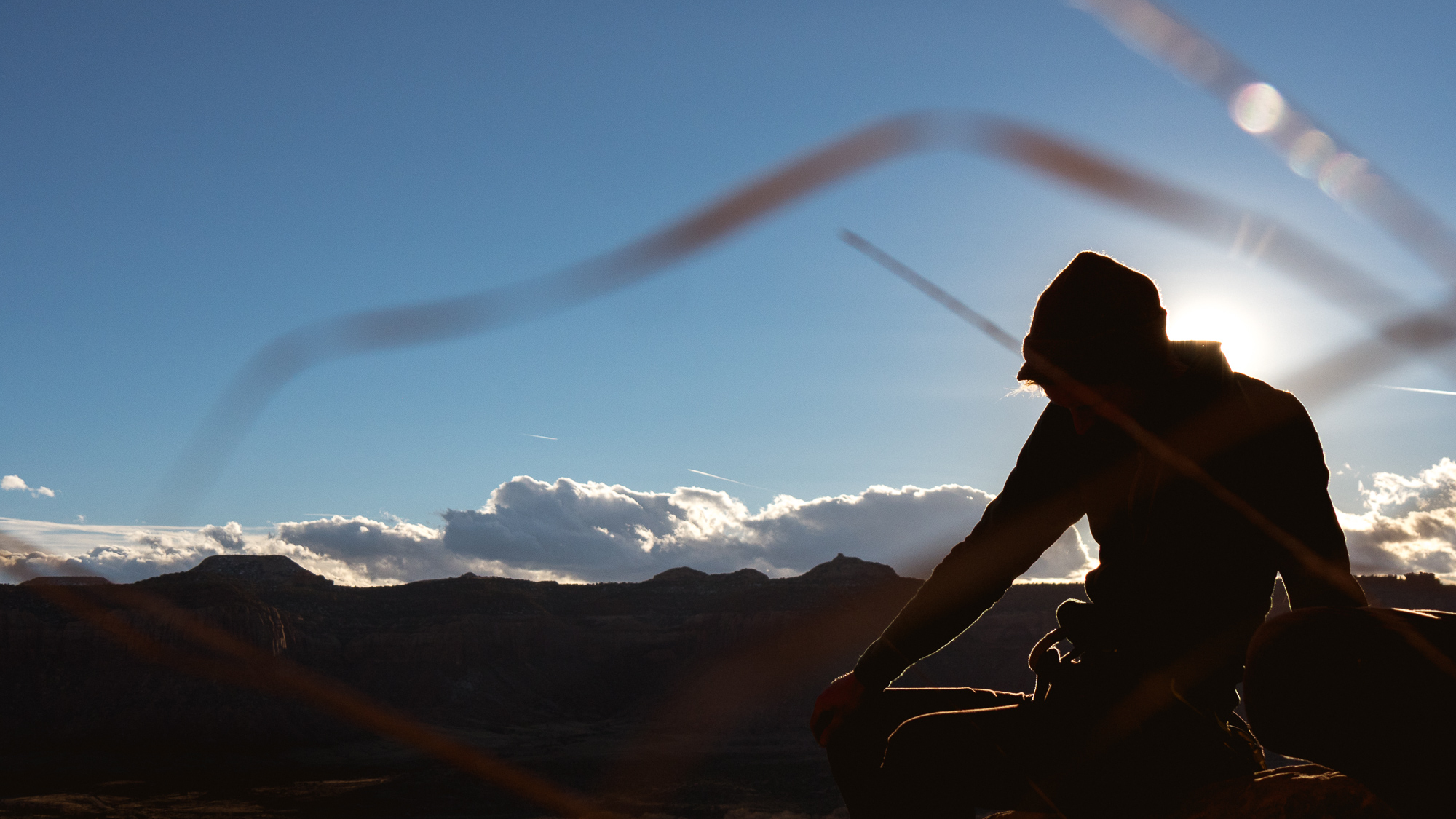 I TR'd up Broken Tooth as the sun was setting, hoping for photos of Reese on the offwidth Tooth Fairy.

I'd say the spot paid off. 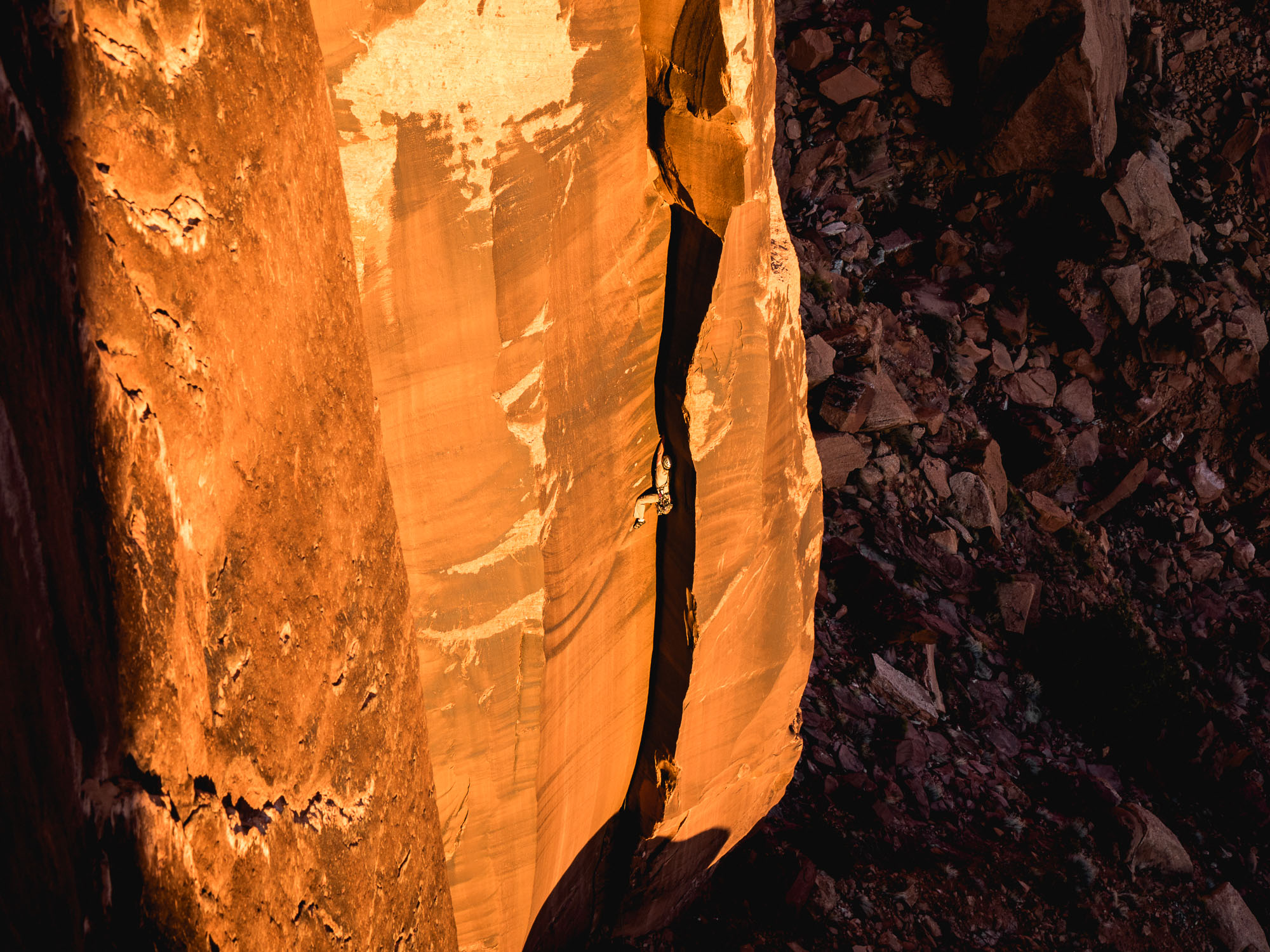 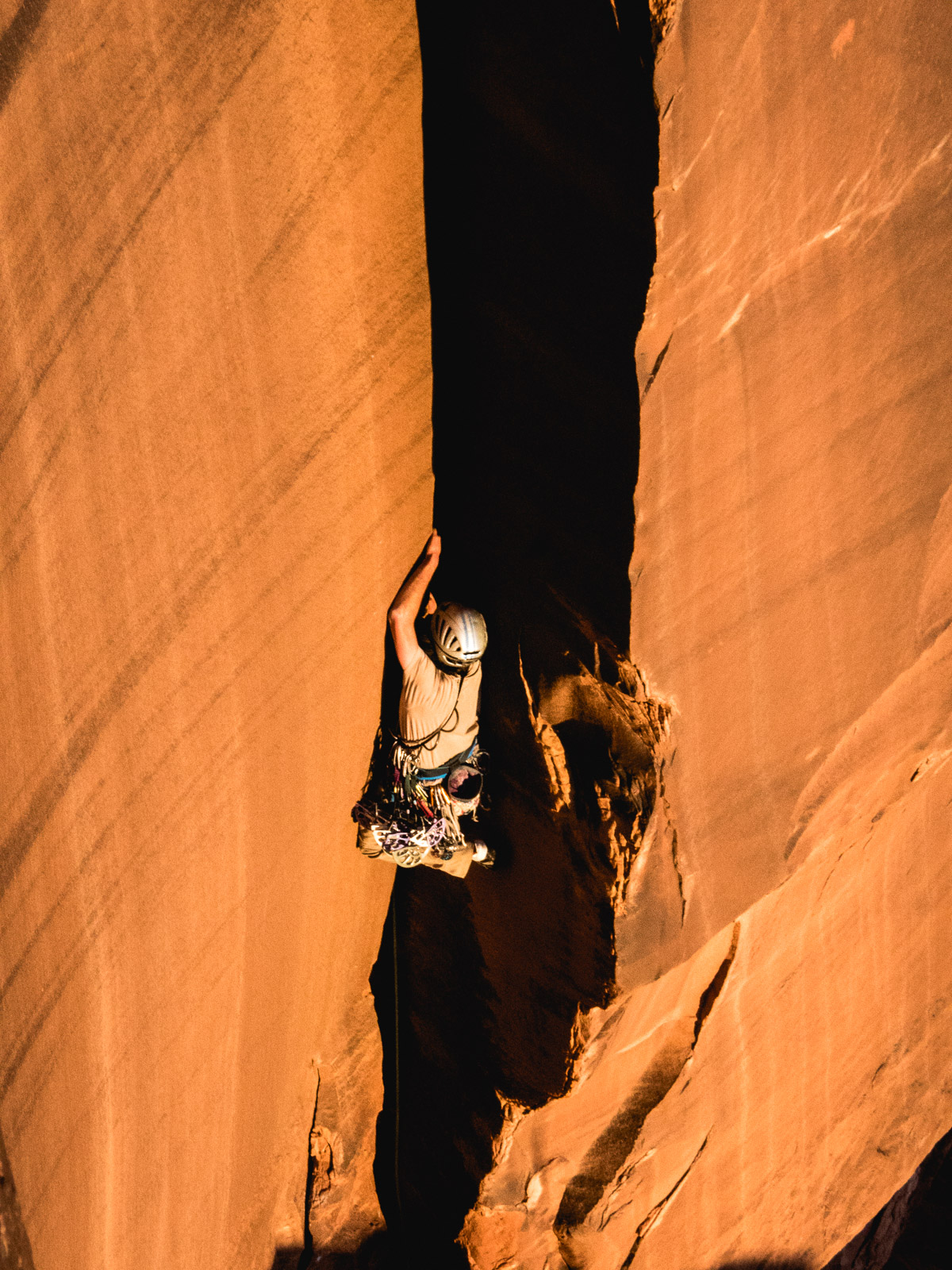 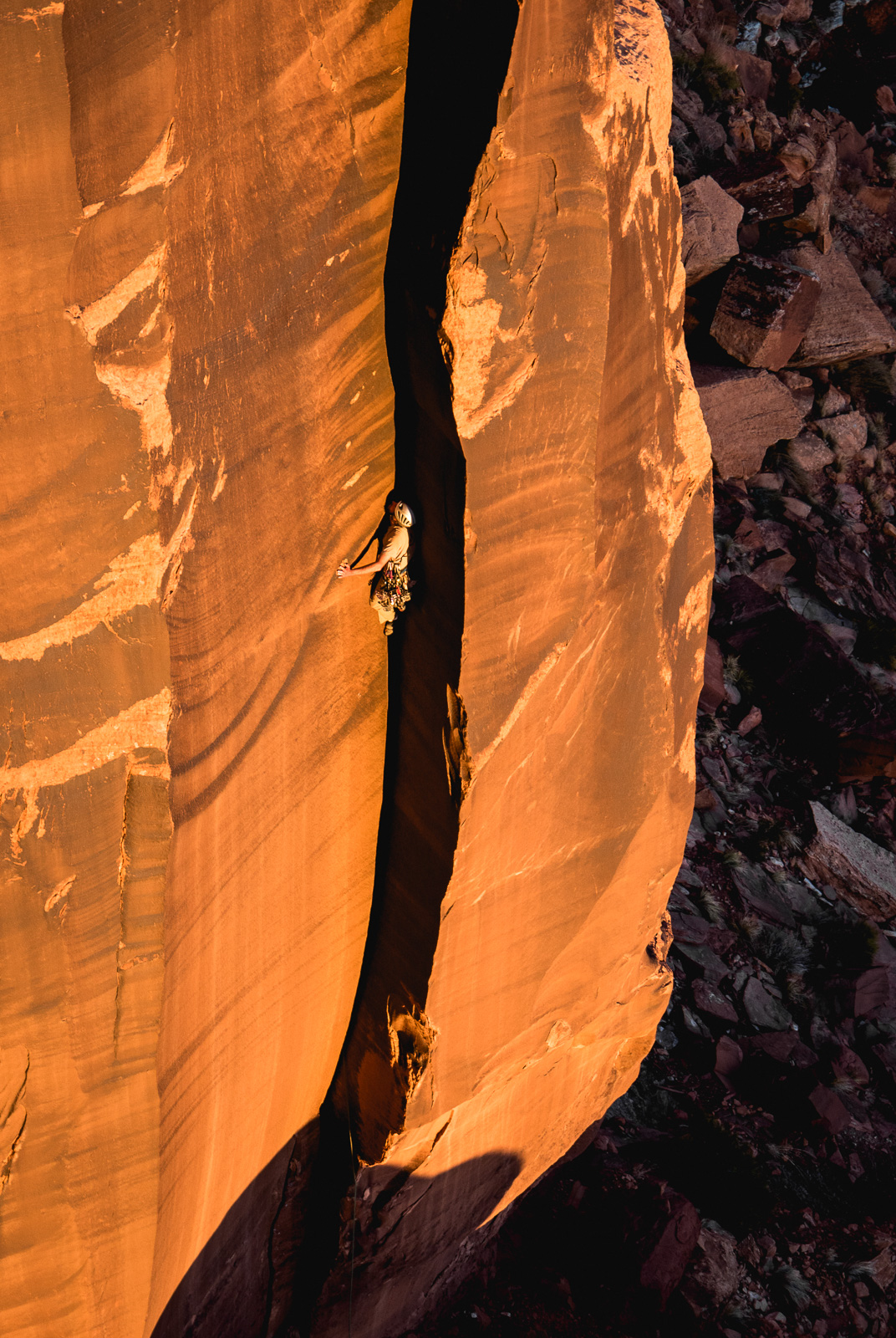 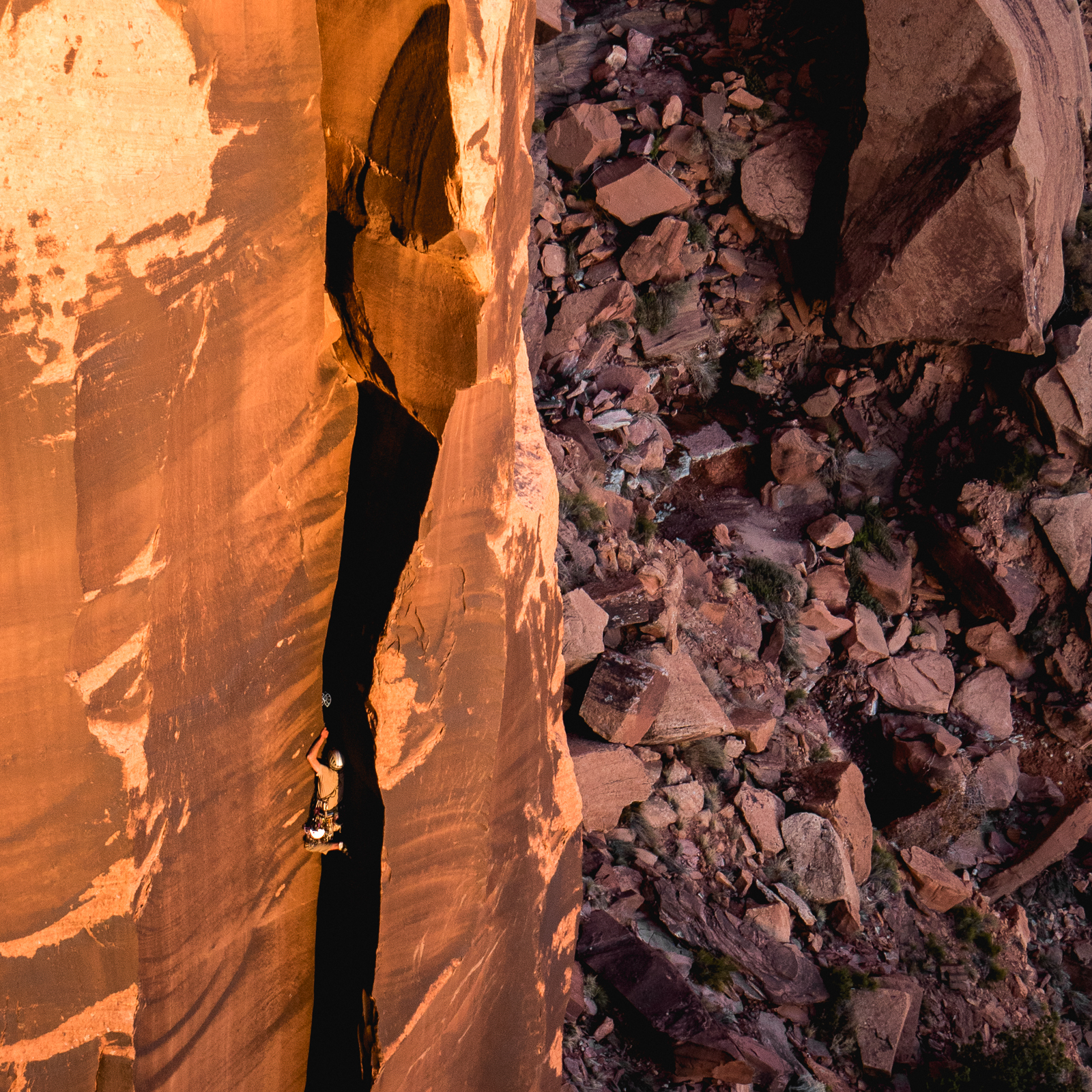 Steele and I teamed up again at Cat Wall, and I got to belay him on the direct start to Deseret Moon.

"You've clearly been climbing in Yosemite."

- Watching Steele in the flared chimney start of Deseret Moon.

Far on the other side of the wall, we watched Nate go for the RP on King Cat. 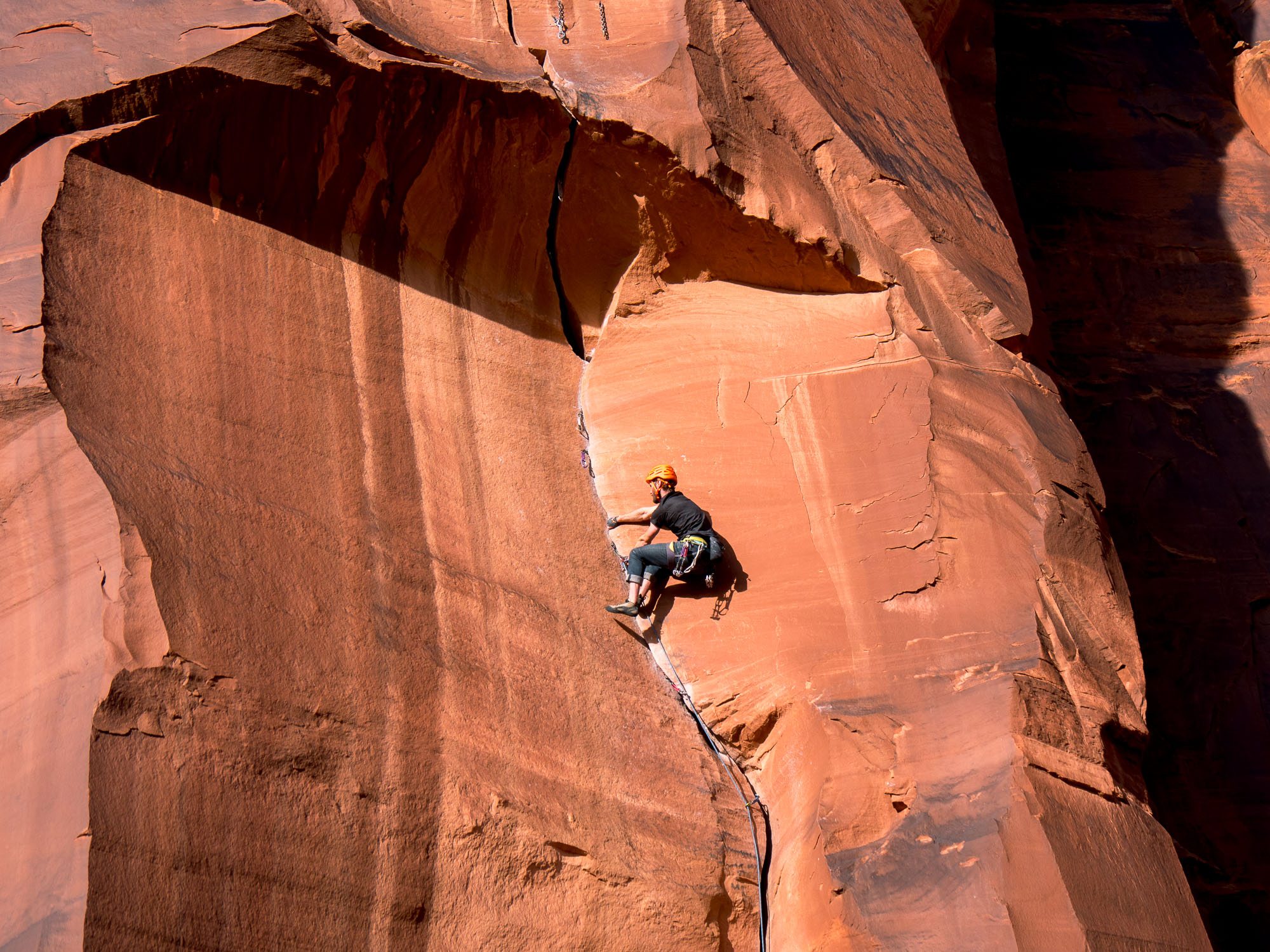 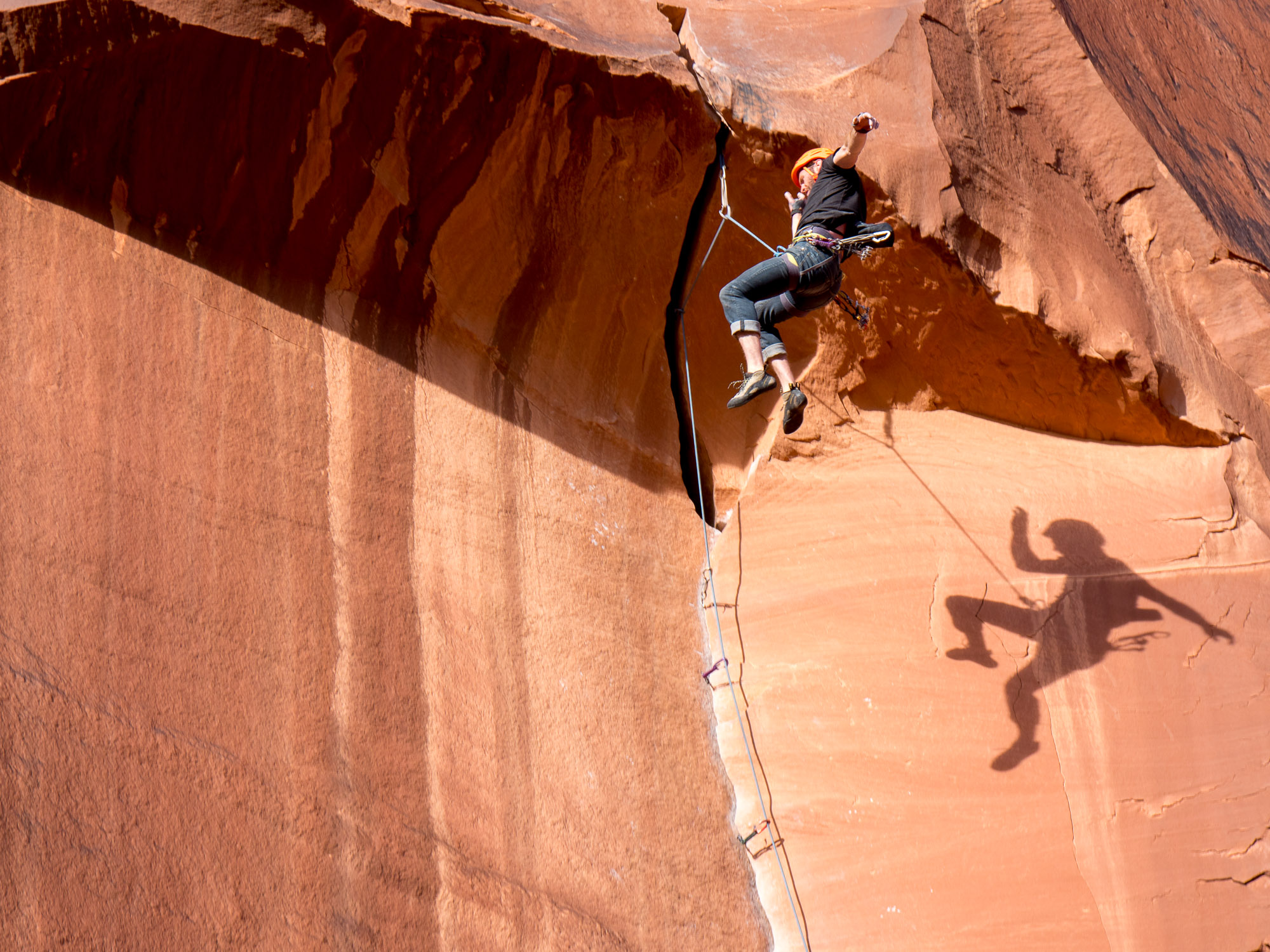 Peter Pan on the crux

Jack's been sessioning on the crack machine, and at the end of the day we all settled in to watch him put that training to work. The whole team was there to cheer him on as he closed the day with Johnny Cat. 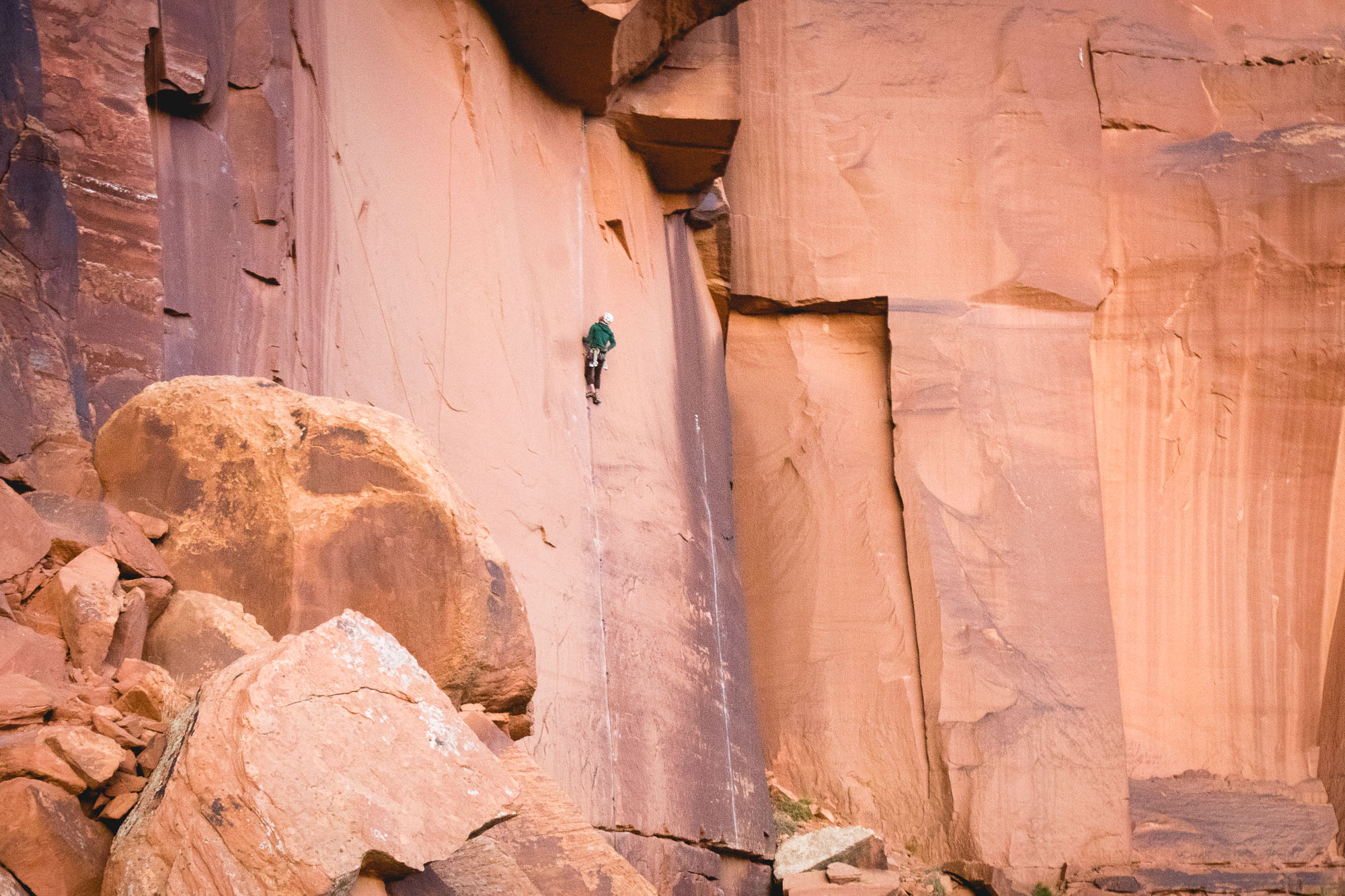 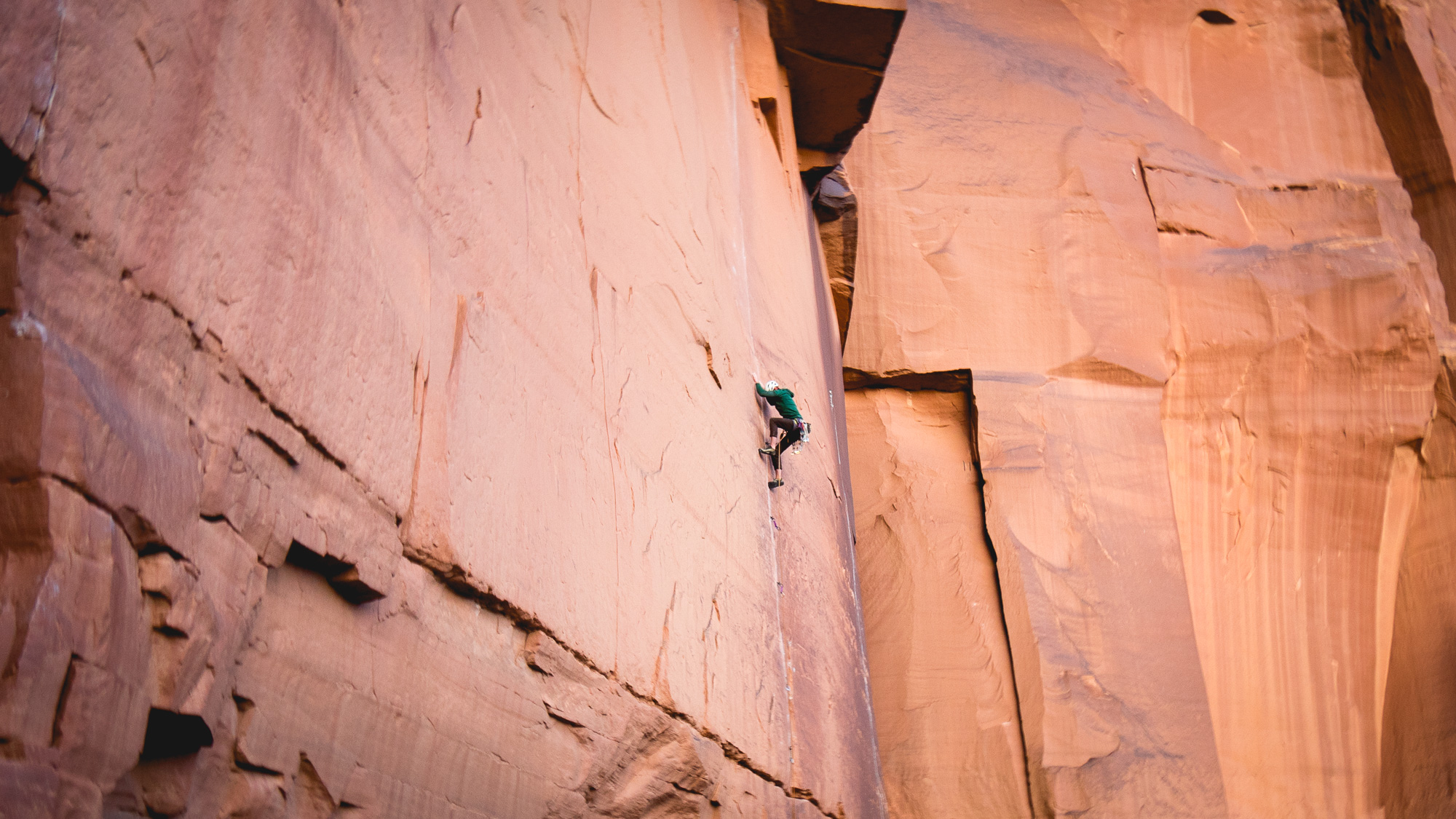 At one point Jack lost both of his feet and began screaming "Falling! Falling!" to which every one of us replied "NO! KEEP CLIMBING!" and somehow he did. It was a pretty inspiring display. 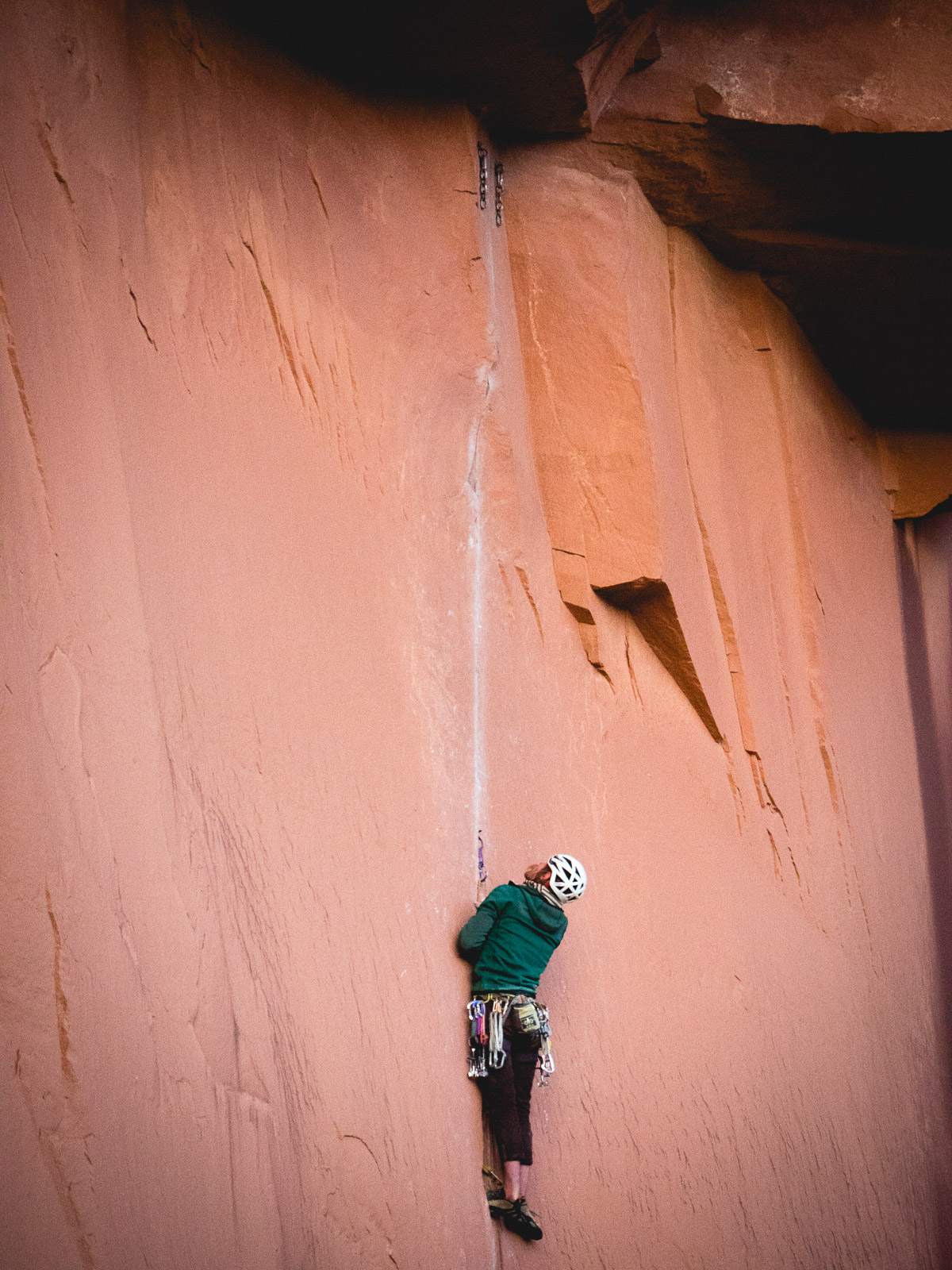 I love this last photo. We've all been there:

Why are the anchors still so far away?

On a low motivation day, the gang party climbed the South Six. That day got its own post. You should definitely check it out. 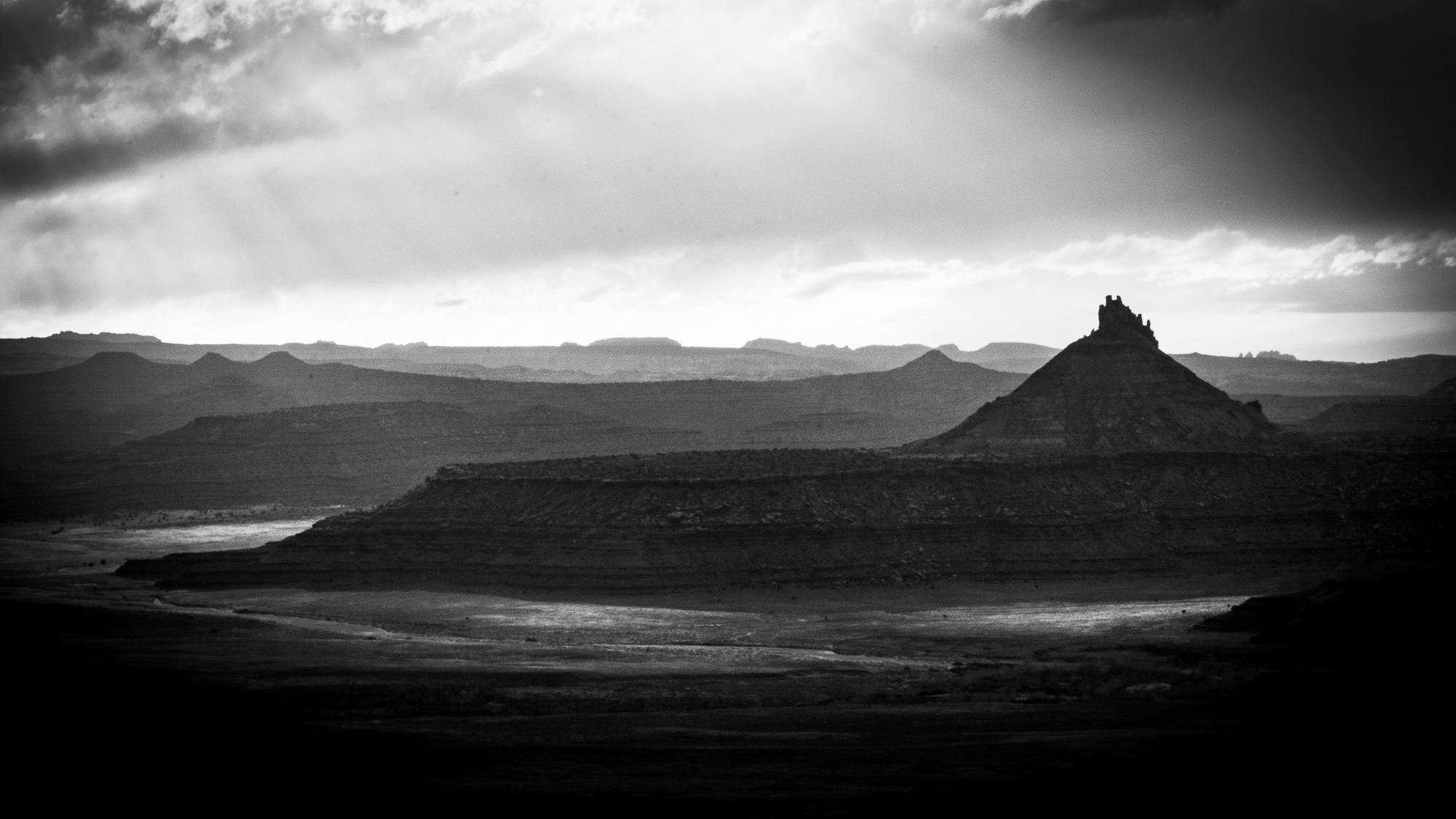 Optimator was home to my project: Annunaki. After sending Spectreman I knew it'd go, and promised Hilton I wouldn't leave the Creek with it unsent... Yet two tries on the same day both had me popping at the fingercrack finish. 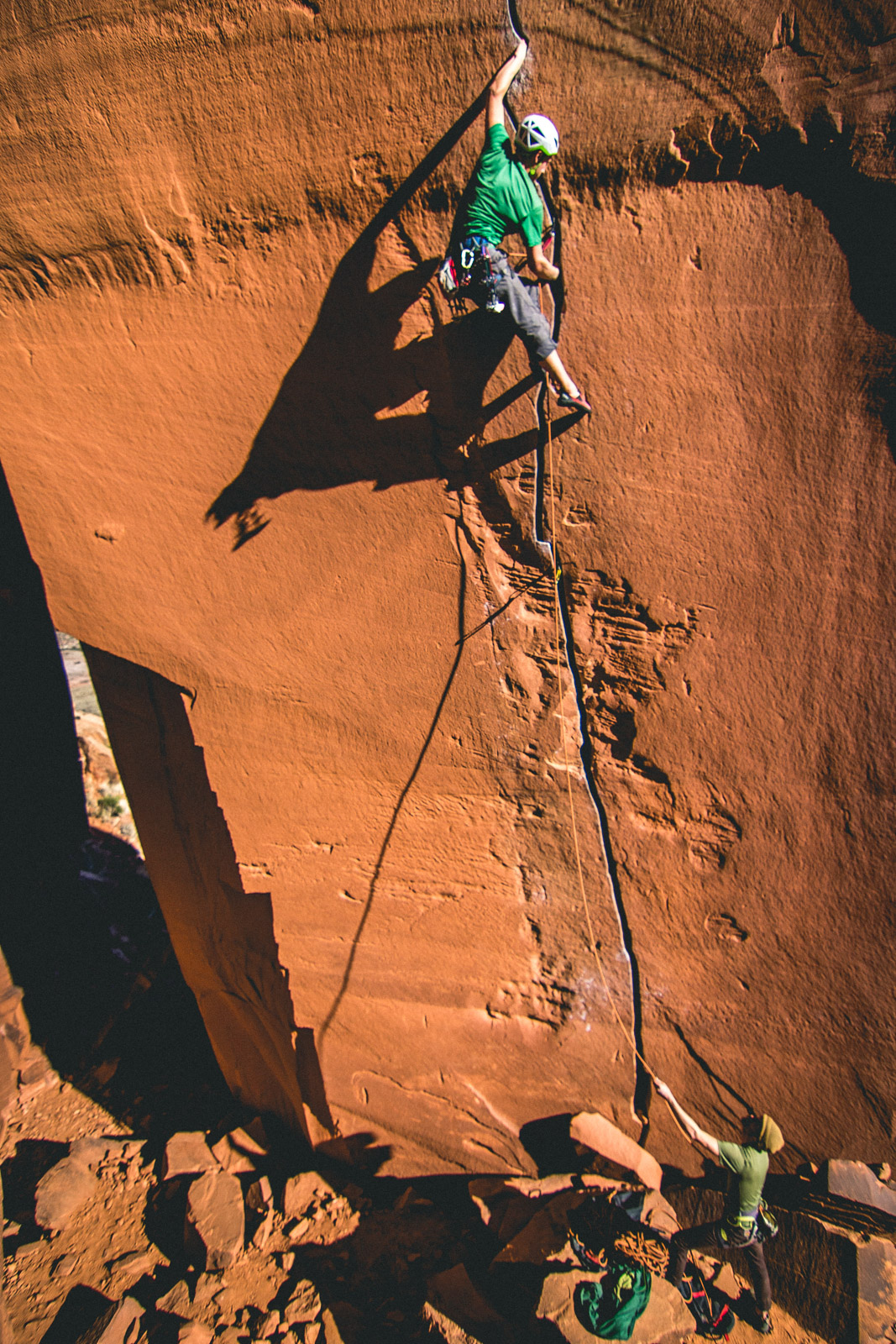 A photo Thomas was kind enough to share with me

The day after climbing the fingery Ruin's Crack at BoB, I came back and sent Annunaki on my "warmup" lap. Before I started up, Thomas gave me some sage advice. Just as I was about to launch into the crux I stopped, took my time, found the best locks, rather than just rushing into things. Two moves later I casually clipped the anchor. Heck yeah.

Brit, Thomas and I finished that day on Neat, what was pretty neat. I lead it, then got to go again on top rope and clean it, swimming through the twos...

Scared Cow was my last day of climbing, and another day of ratcheting my max gear onsight up: Steve Carruther's Memorial, a 150'(?) 3s crack. I took up, I believe, 9 blues, 8 golds, and 3 fours. Twenty cams. Nearly taking a heart-stopper at the anchor, I wished I had taken a .5 up as well.

An hour before that, lying in the sun and trying to get warm, Brit and I watched Reese climb Fatted Calf 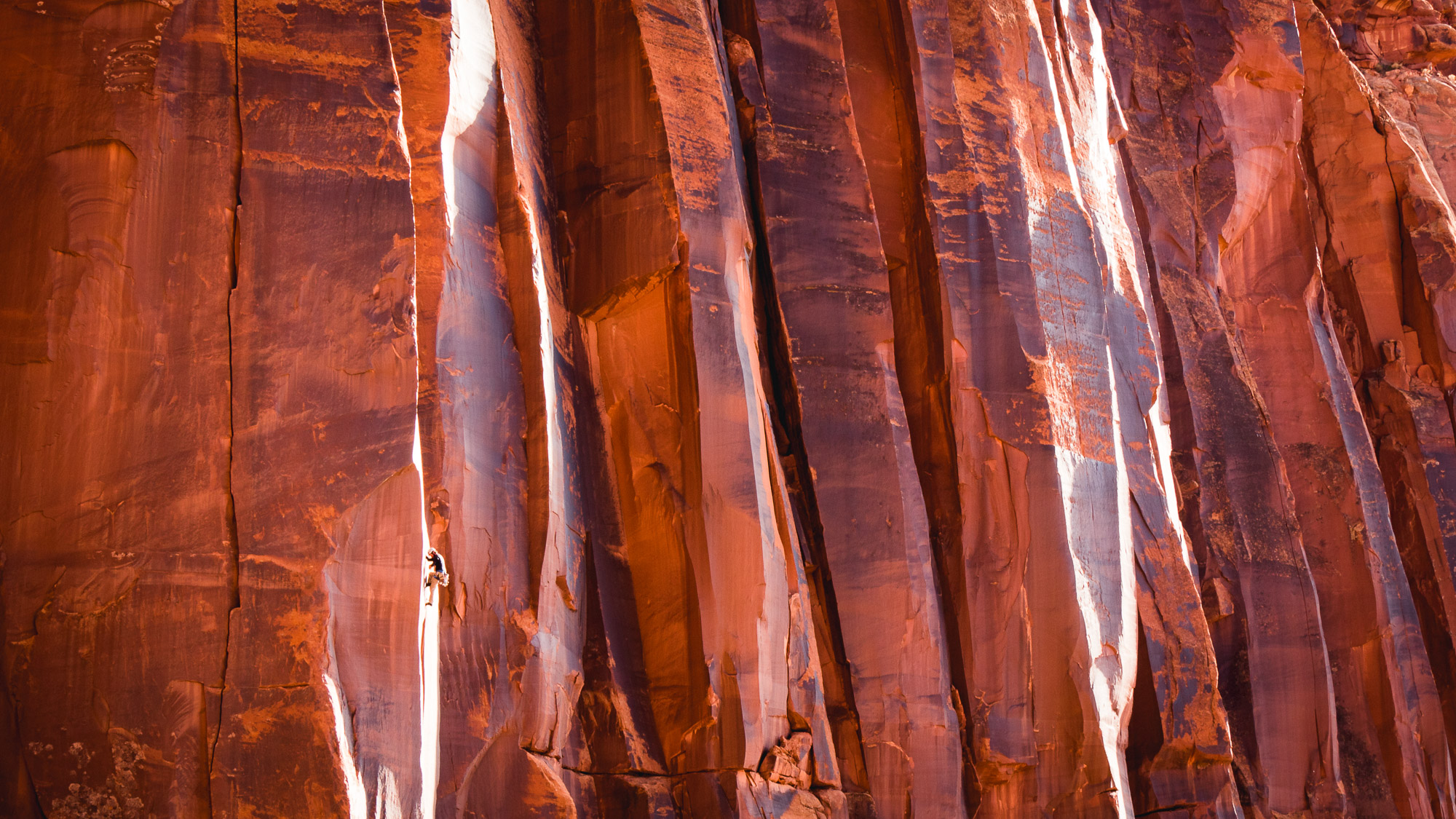 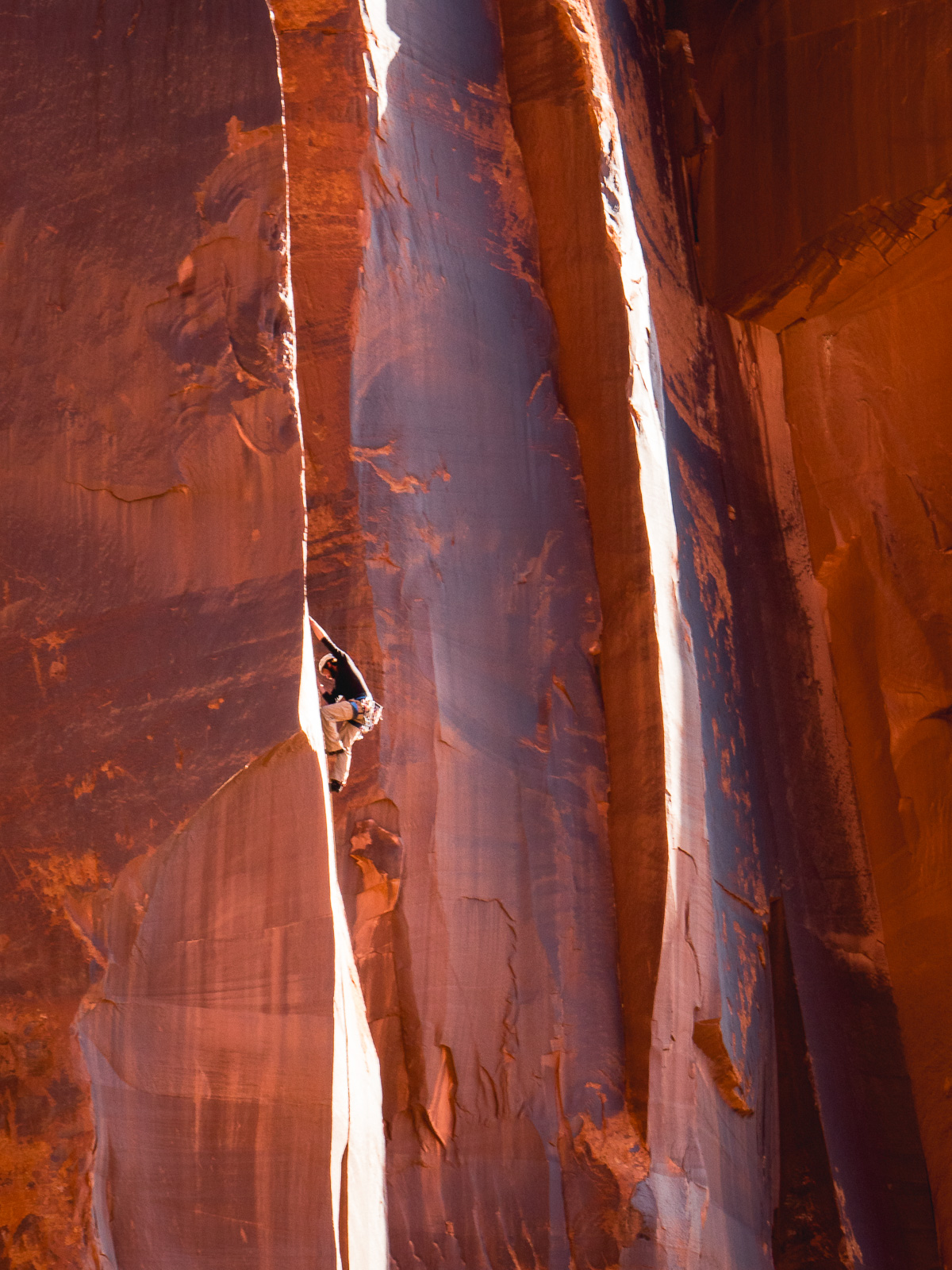 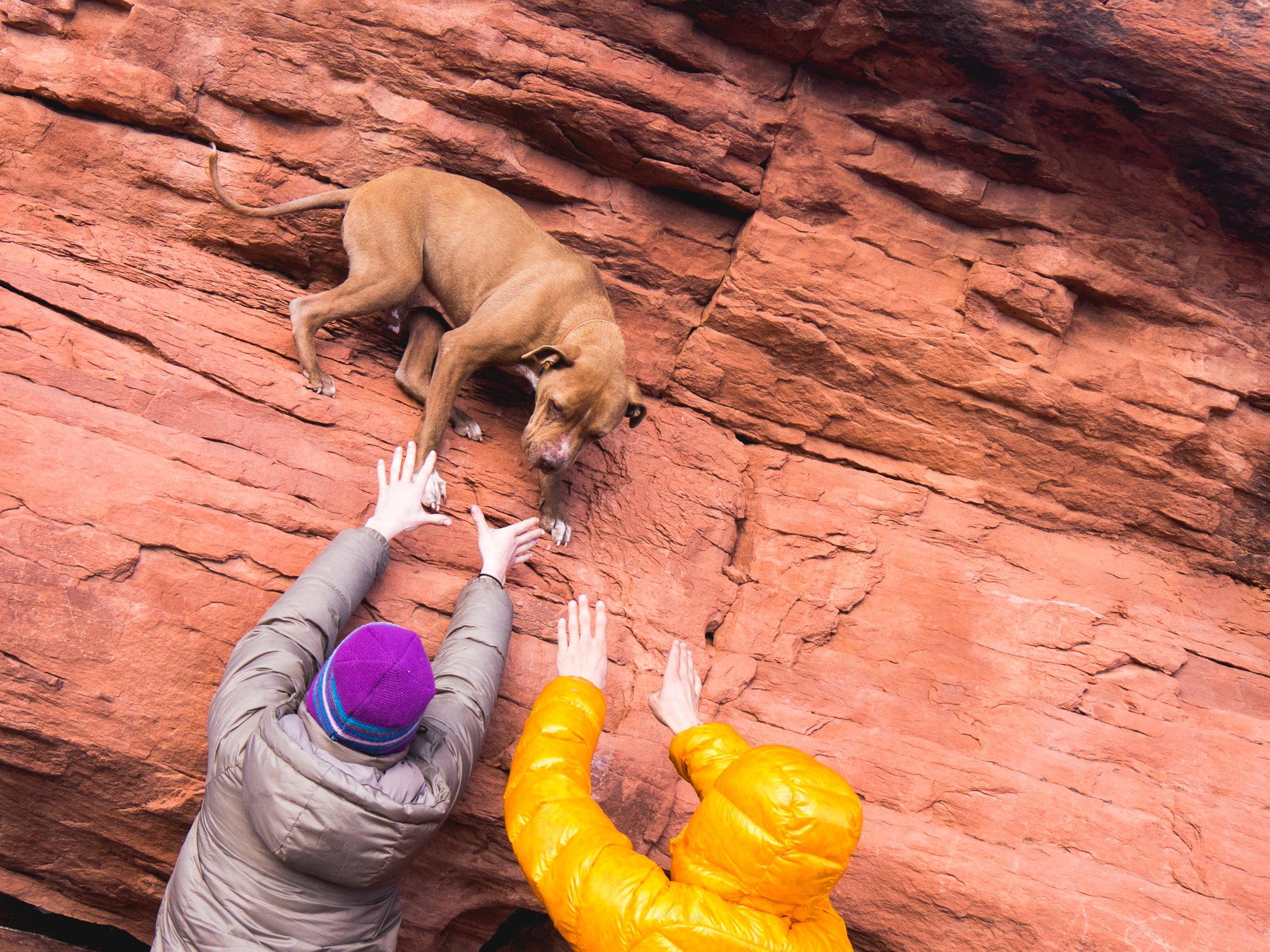 I have a little story I like to tell with this photo. 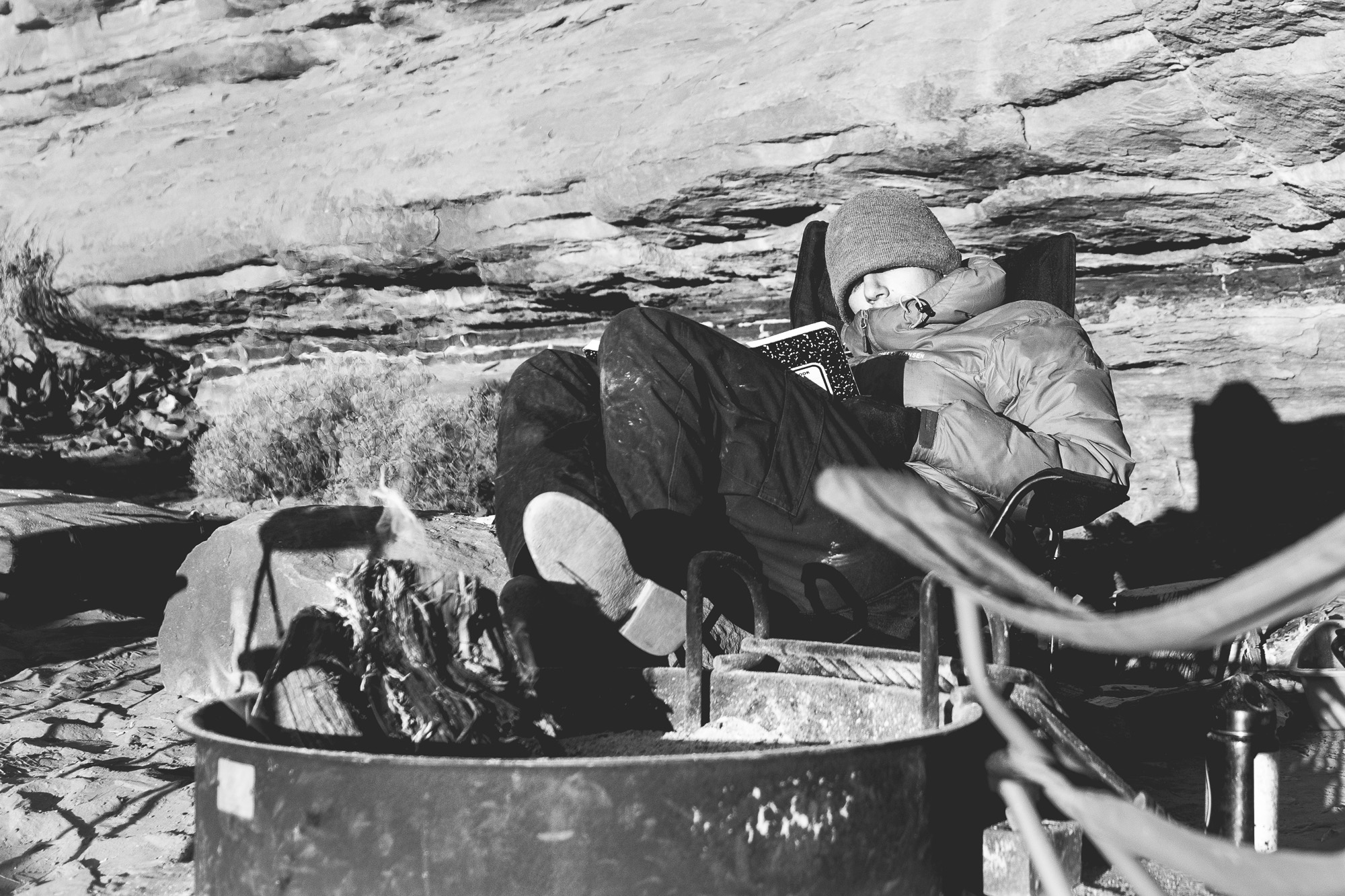 Matt and I were both in the habit of being up in time with the sun. For half an hour every morning, the camp was still save for the two of us. The suns rays came straight over the earth at us, and most mornings Matt and I would pass those thirty minutes without saying a word to each other, just enjoying the silence and solitude. He would sit by the morning fire he'd made and journal, and I would start water boiling in preparation for the rest of the camp waking, and then settle in to my book next to Matt.

Something pretty magical happened on Thanksgiving night. That night our party suddenly doubled in size when Mike, Bruno, Jim, Sarah, Adam, Ashley and Kalen showed up and joined in.

So, as far as my photos are concerned, that was it. There was plenty I left out, but if it all got written down here we wouldn't have any stories for the campfire next year.

Here's a few more photos though, that didn't quite hew their way into the tales of climbing, but which are certainly part of our time together. 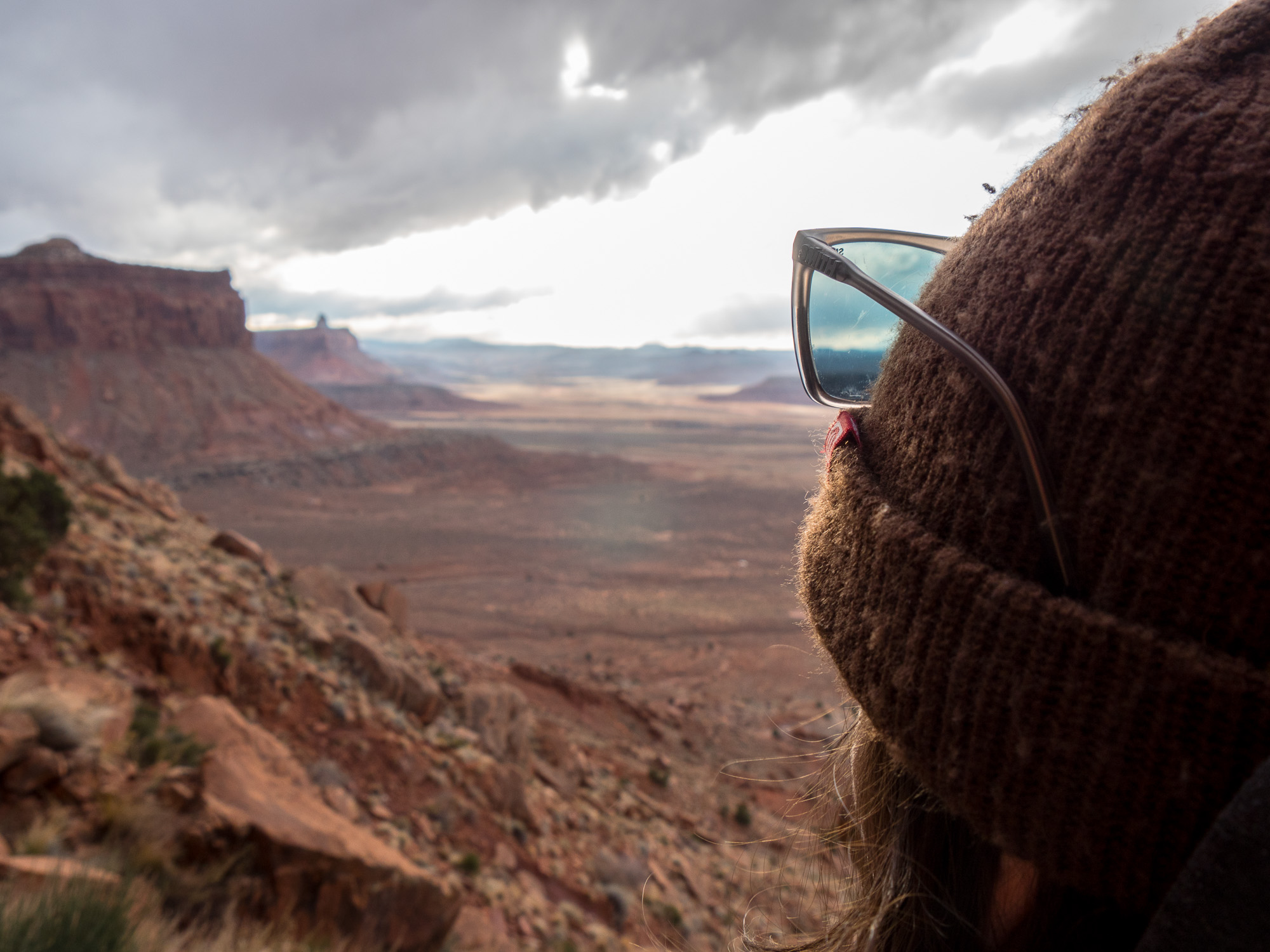 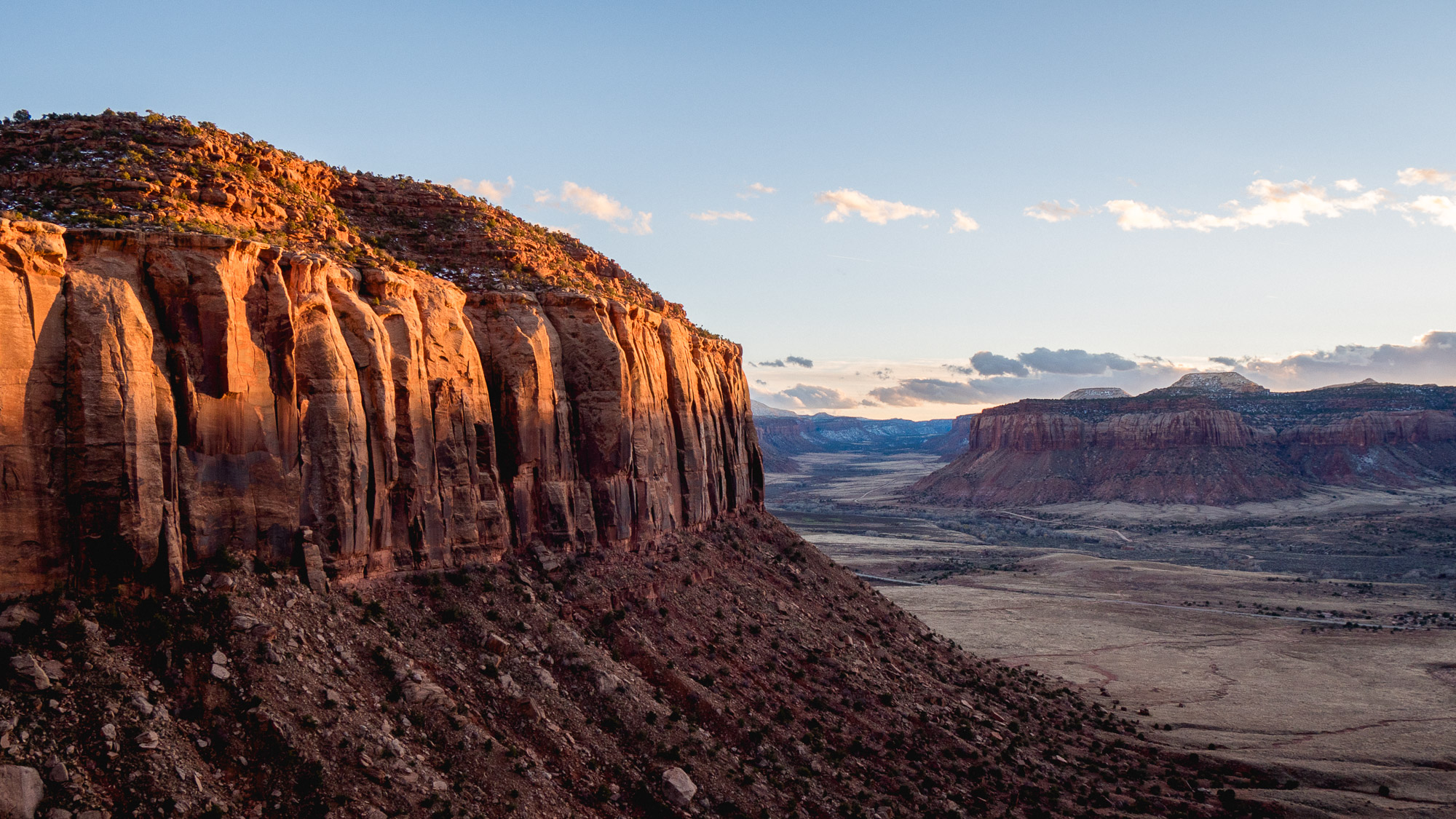 You count things in Indian Creek a bit differently than other places I've been, so the ticklist is going to be a little different to match that.

Dental Floss Tychoon, South Sixshooter (5.easy, but I was drunk and wearing shoes and a backpack full of booze)

Battle of the Bulge

Battle of the Bulge