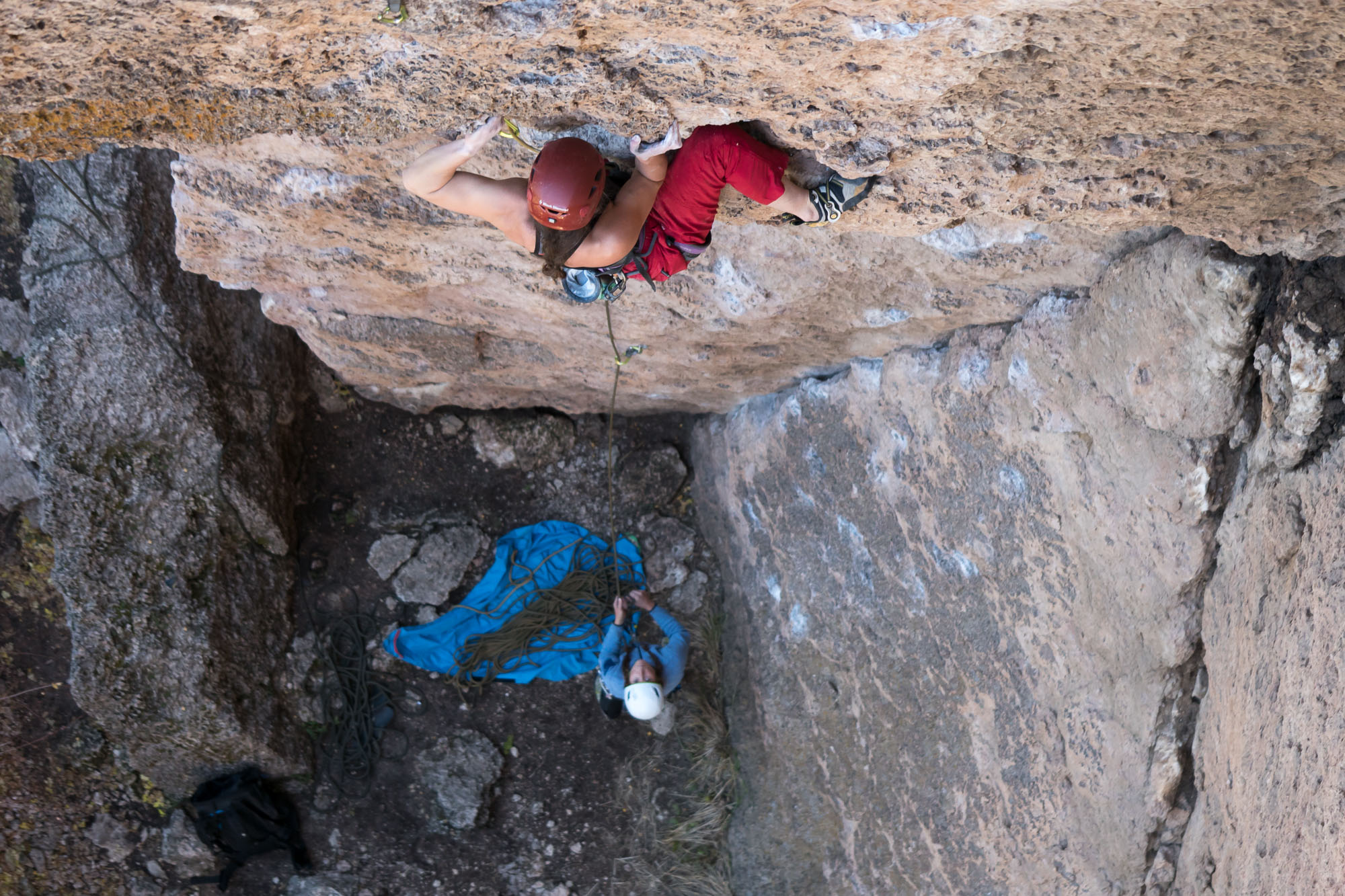 I drove east after the my trip to Massacre Rocks with Trudeau came to an end. I stopped in Jackson to have a beer with friends then drove on and on. Up and over Togwotee Pass, through Dubois, past Riverton, a left turn in Shoshoni, and as my eyes begin to droop finally coming to a halt at Boysen State Park. Six hours later I rolled open the door and greeted the sun - and startled some deer that were enjoying the empty campground. 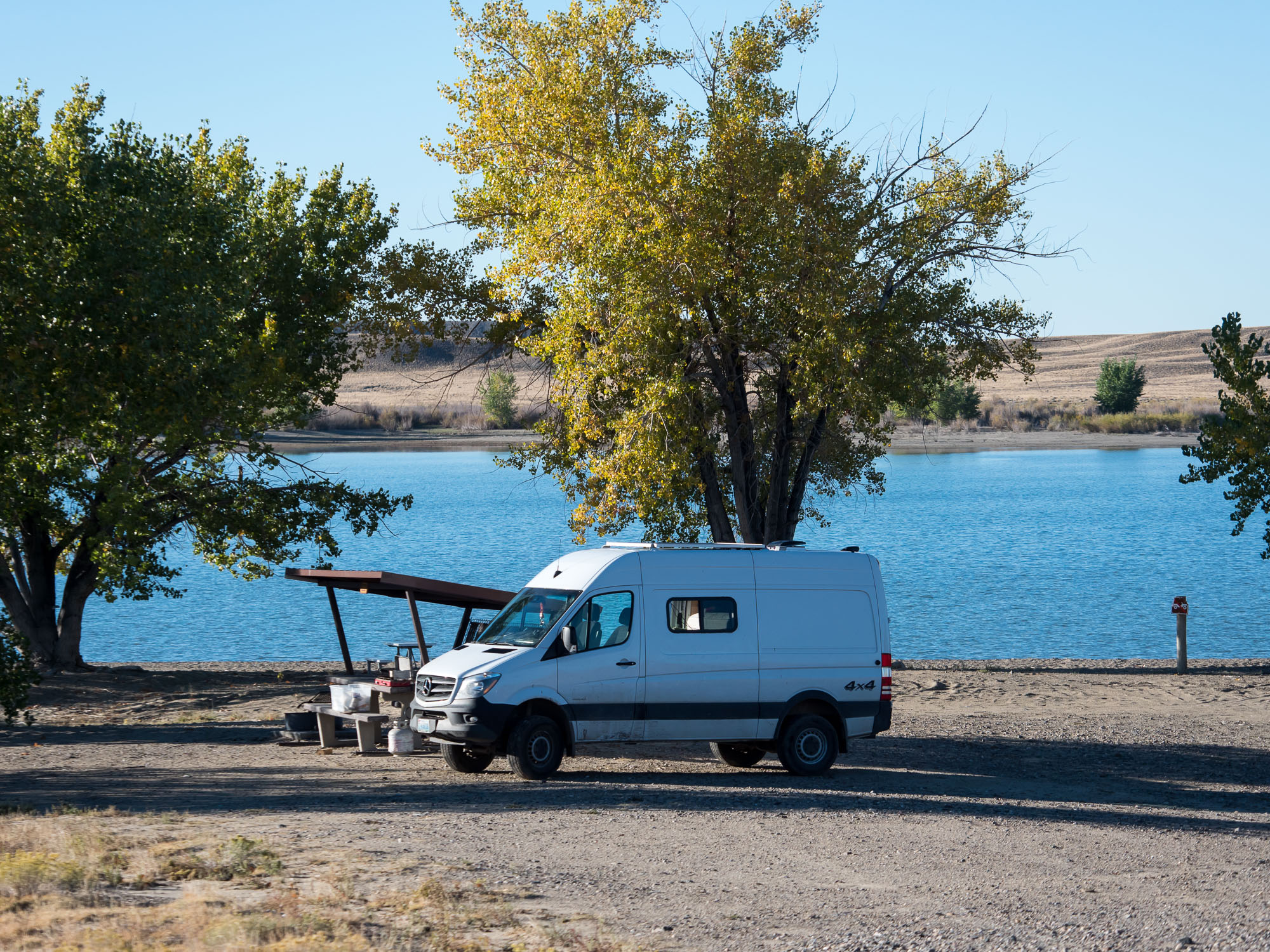 After a quick-but-tasty breakfast I pointed myself north at Wind River Canyon and pressed on. 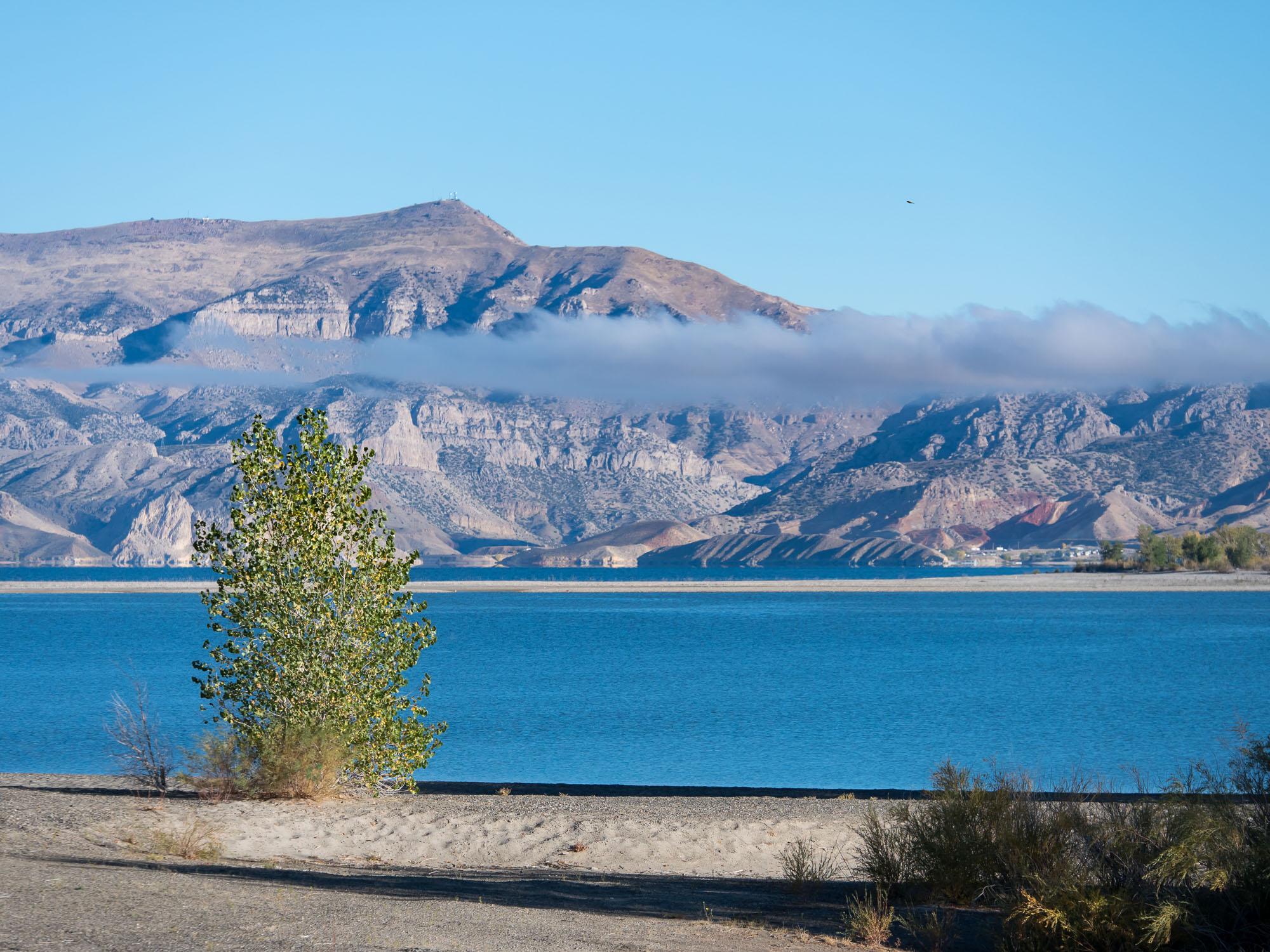 Past Thermopolis and Worland, I finally arrived back in the glorious Ten Sleep Canyon, with all its falltime cows. 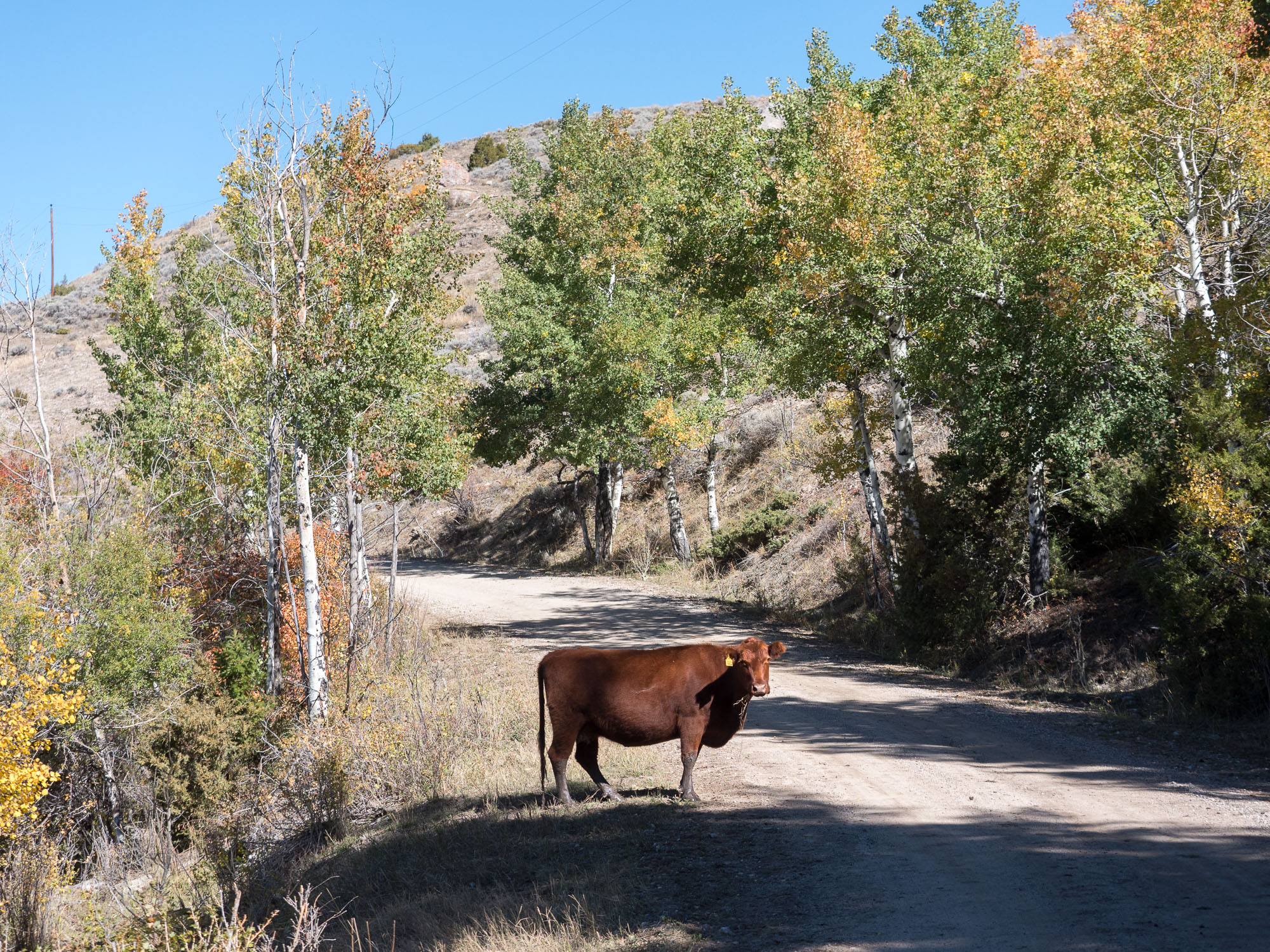 I was taking this long route because an internet friend had told me she would be in the Sleep when I was heading to Wyoming's NE corner, and I had invited myself to join her group.

I got lost - and played with some snow - on my hike to find Claire et al up at FCR, but eventually, find them I did.

I warmed up on Chaos Crossbow Theory, an old favorite, and cooled down by jugging it while Claire onsighted it with her friend Trish belaying. 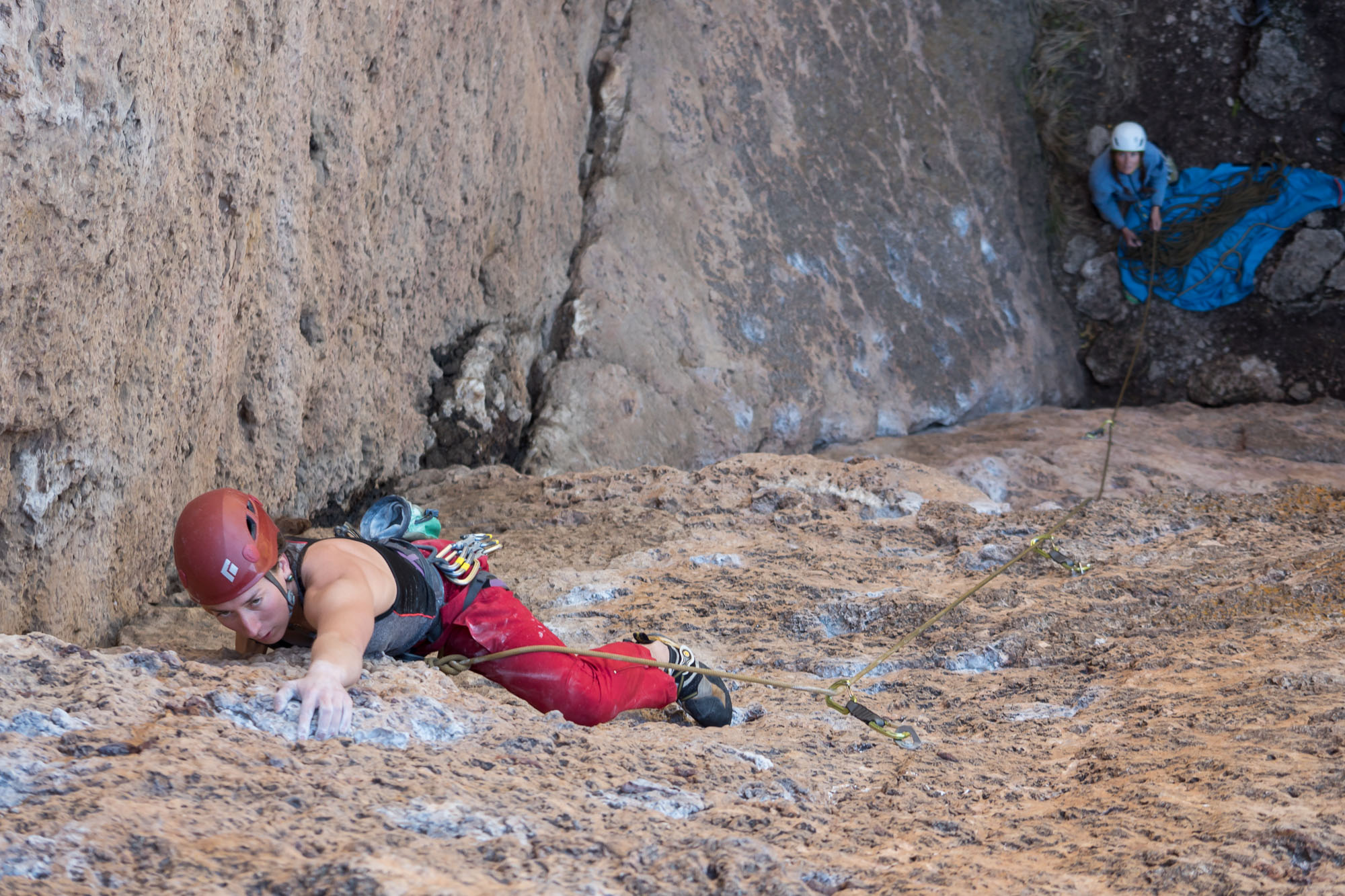 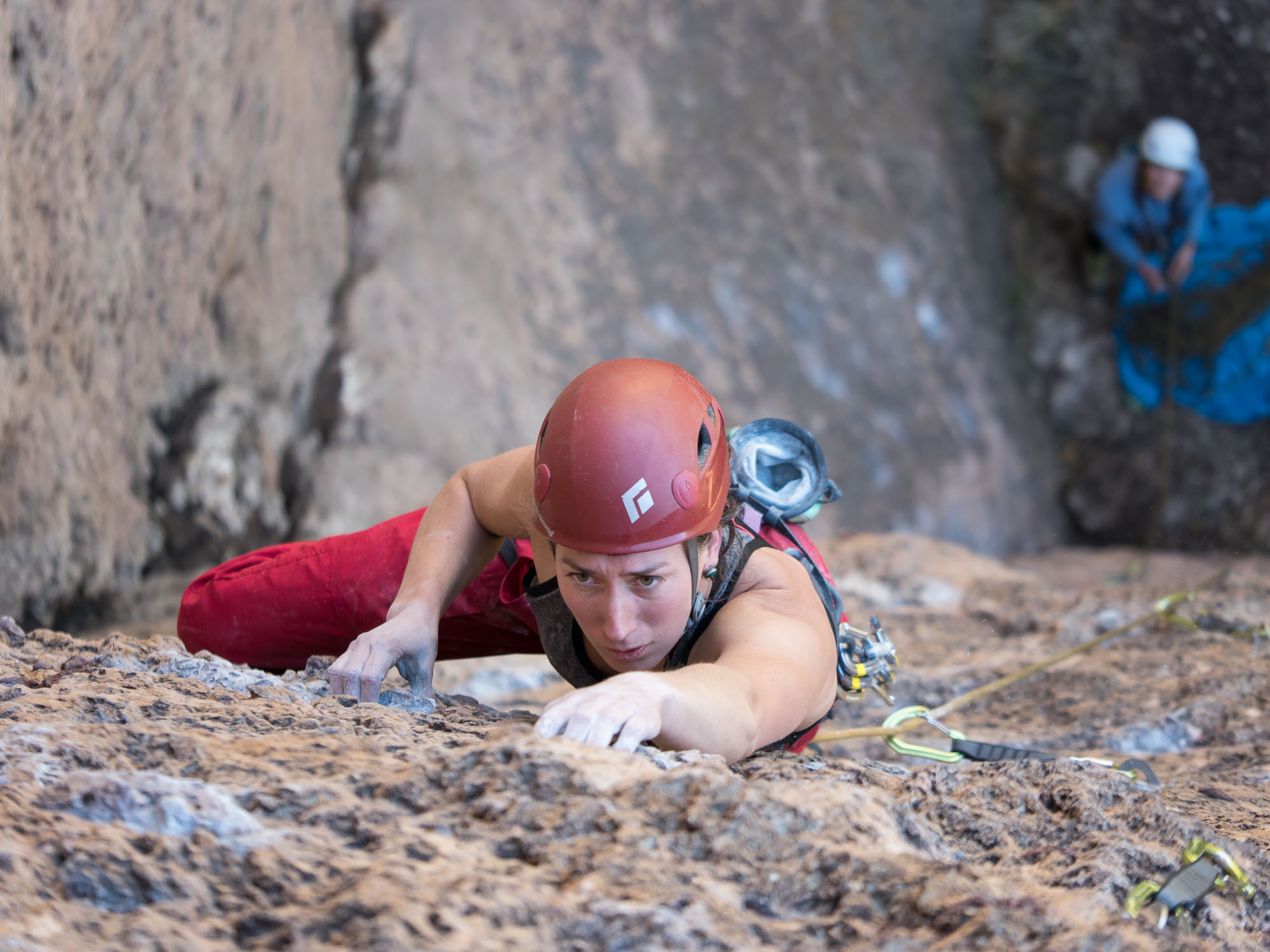 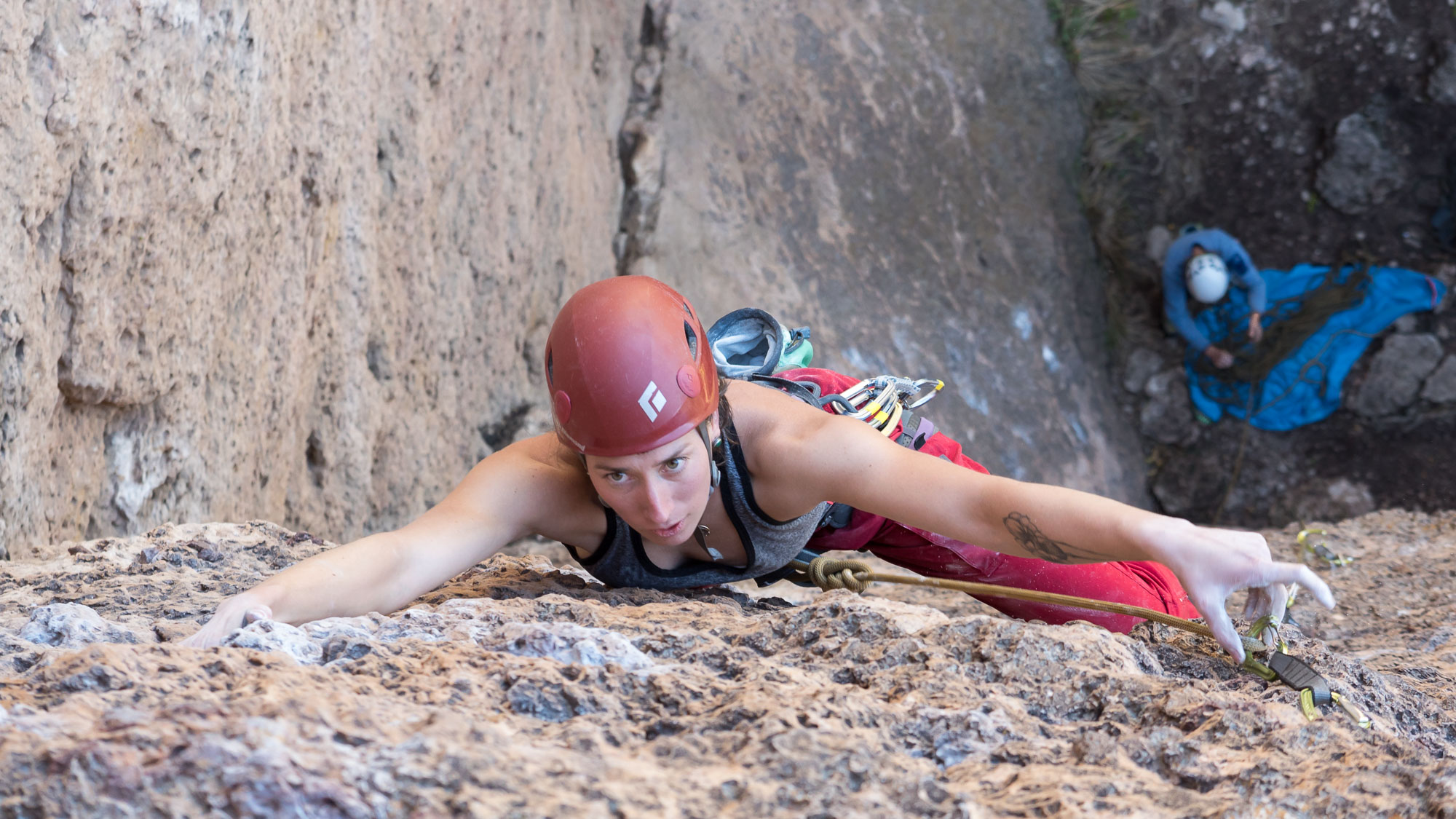 I stuck around and shot the shit for a bit with that crew then got on the road to my true destination: Sheridan, to spend time with me Aunt and Uncle. And get a mattress.

On my way up to Sheridan I had made a post on The Project advertising my presence in Wyoming's northeast corner. After a week had gone by with no real responses, I said the-hell-with-it and decided to move up my plans in Laramie. I'd get my in climbing fix by stopping for a night in Fremont Canyon along the way.

That, of course, was when a stranger (named Chad) emailed me to go climbing in Ten Sleep over the weekend. My initial mental response was something like

Eff man, I'm already committed to Laramie and am driving to Casper right now. No way do I want to go hang out climbing all weekend with a rando.

My next thought was:

Wait, what? Who said that?

I emailed Chad back, letting him know I had to cancel some plans I'd made and would get back to him.

When things checked out - plans pushed back to Tuesday - I flipped the car around and headed back to Ten Sleep.

Chad was slated to arrive early the next morning, so I thought I'd get some work done at the Brewery that afternoon so I could slack off over the weekend.

This guy was there to make sure I did otherwise. 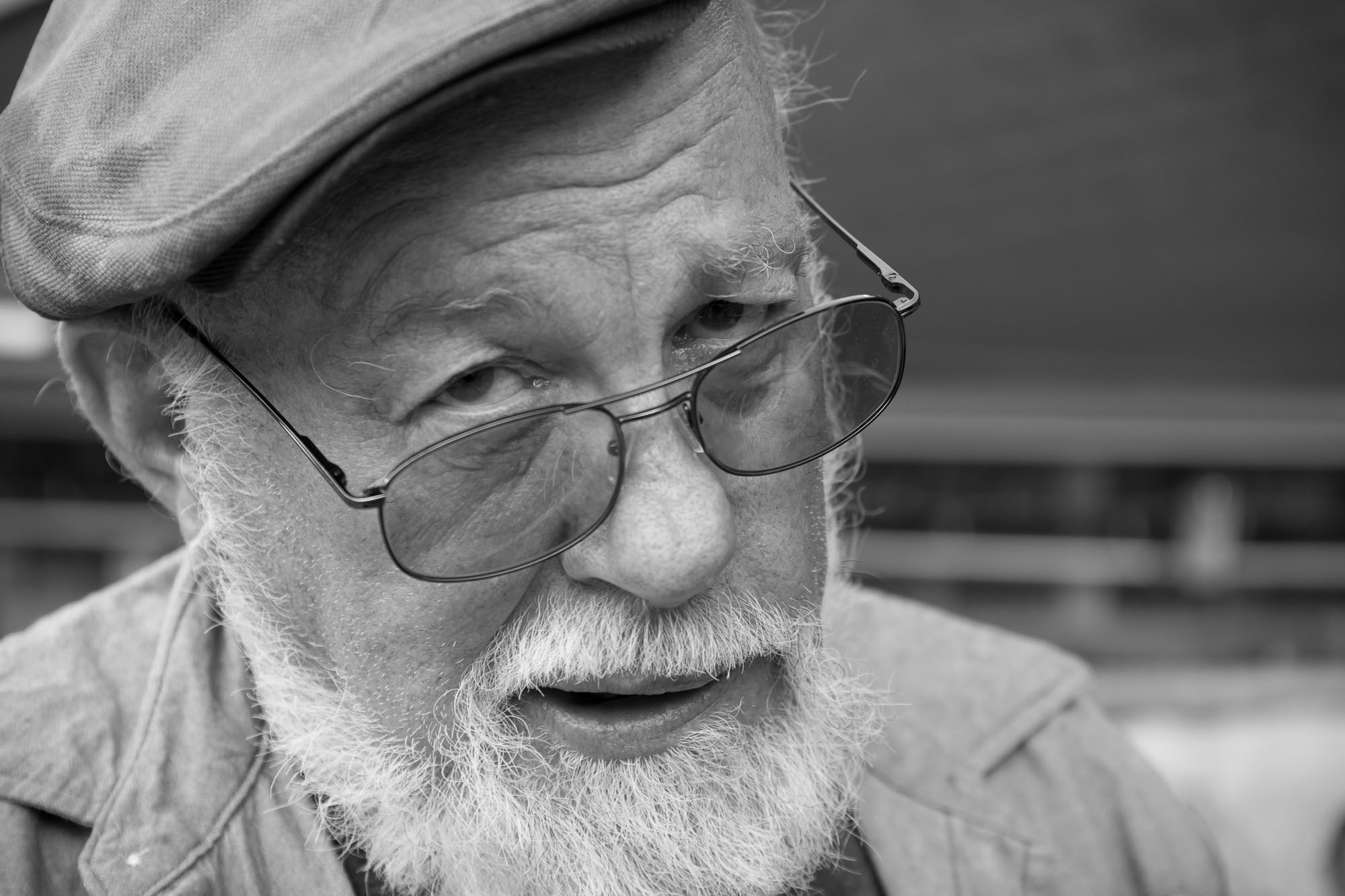 Dan was sat outside the brewery with a beer a good three hours before they actually opened. On the table in front of him was a violin and an ancient looking mandolin. When I stopped to ask him about the three artifacts before him ("Who do you know that you've got beer already?"), he bought me a beer and told me to get my guitar.

And that was pretty much how the rest of the day went.

So much for work. 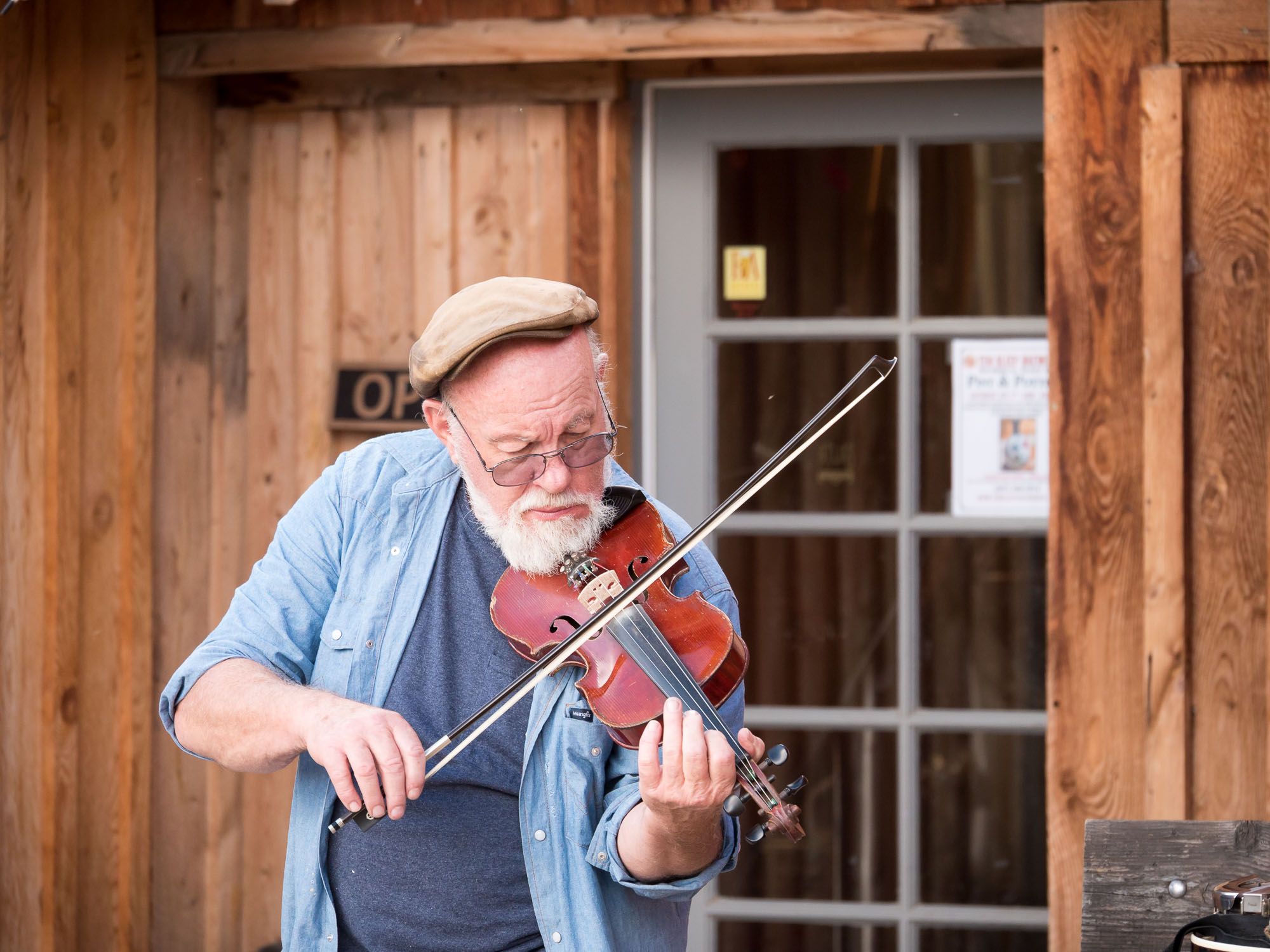 We were going round-for-round, and by the time the brewery opened we were both already gone. Some customers bought us beers in exchange for more music and things just progressed.

At some point Dan drove me back to his place in town so we could pick up his preferred instrument, the banjo. We popped by his nephew's place, some bloke named Jalan Crossland, before going back to the brewery. Hours later, Dan stuffed his face into his hat to keep me from seeing his face as he wept after sharing his memories of Vietnam. 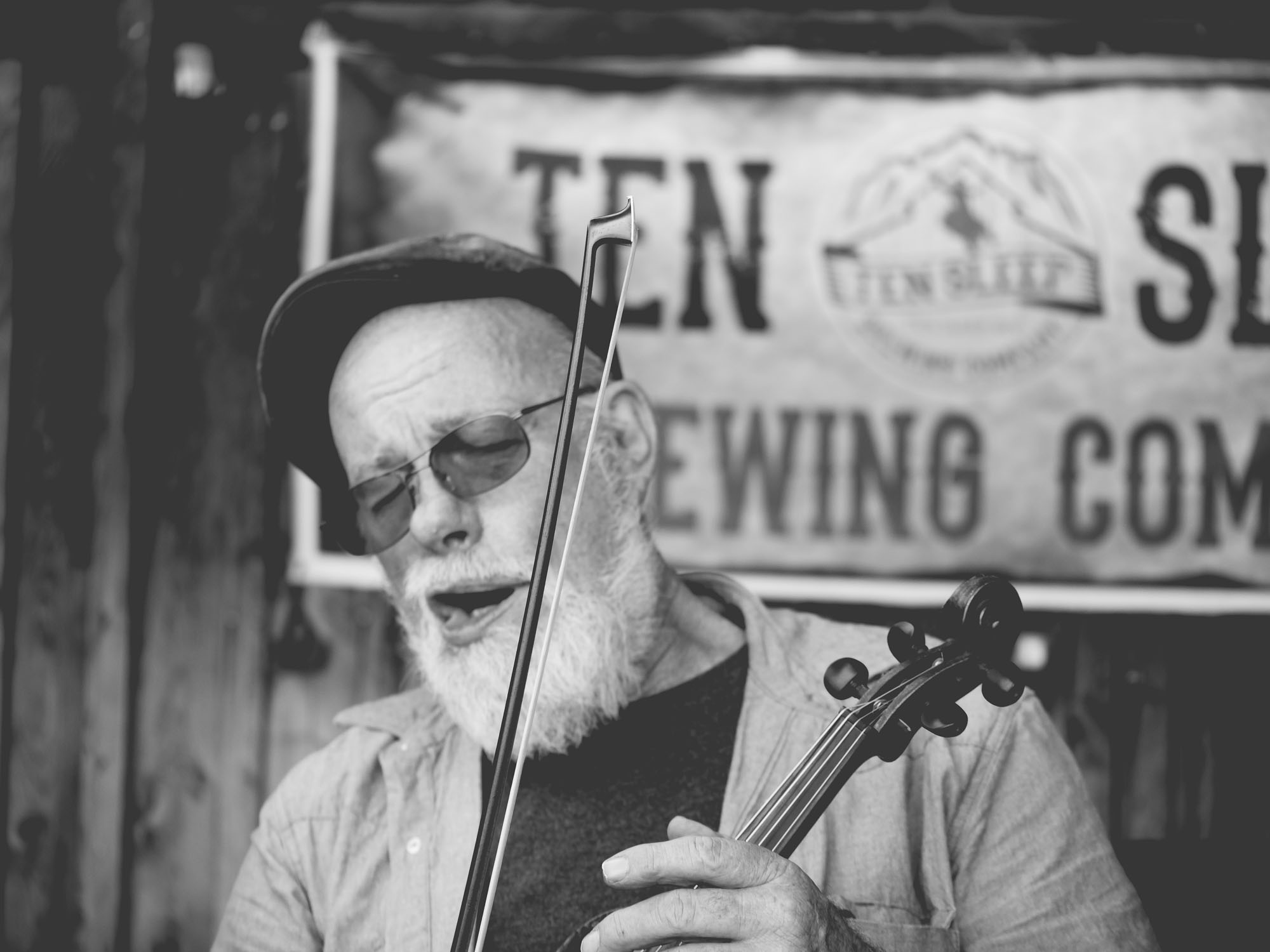 We sang and played, and even picked up other bandmates. 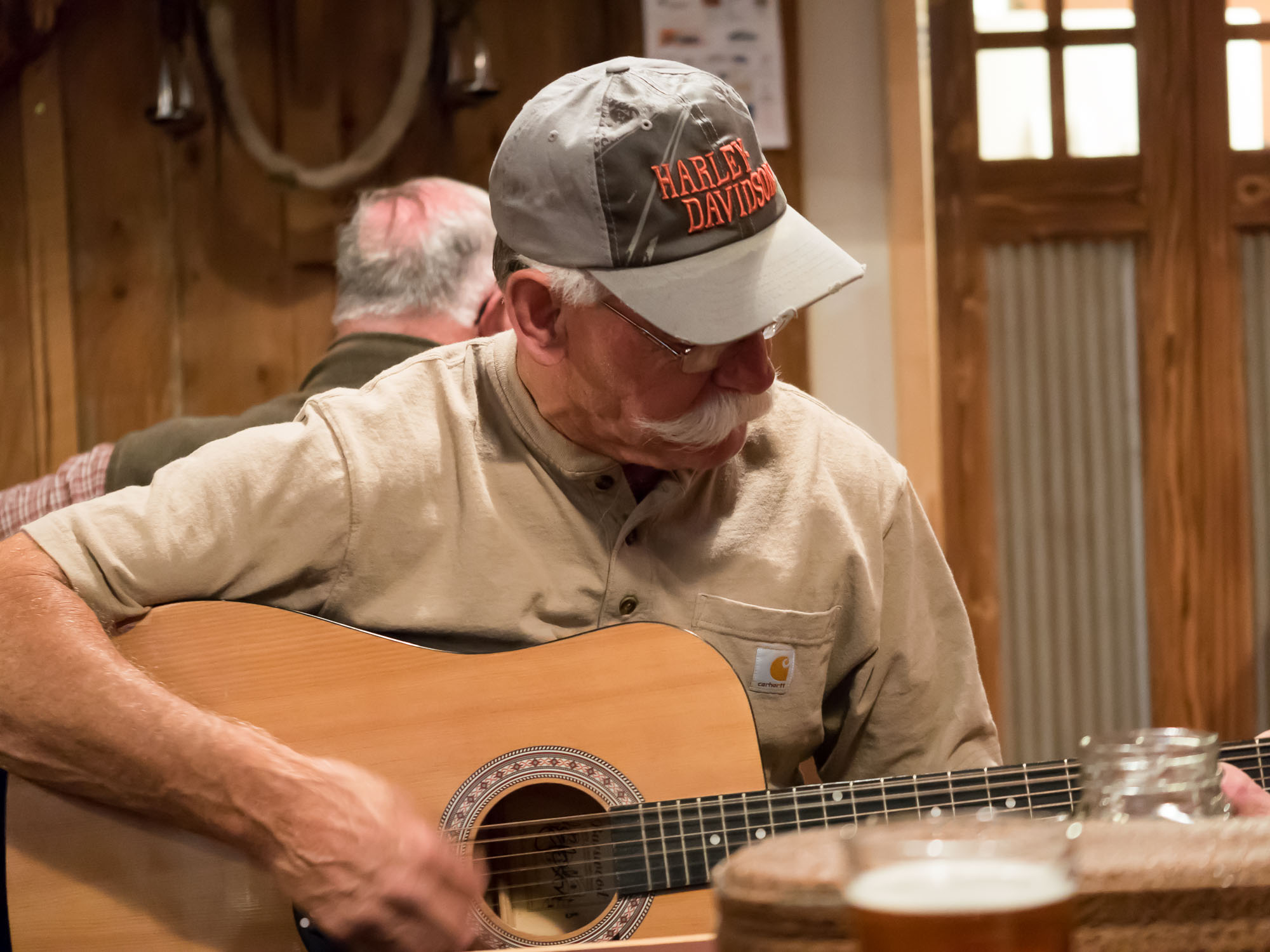 Around 11pm I realized I hadn't had anything to eat except pint after pint of good, strong beer. I attempted to make pasta for myself in the van but poured it all out on the ground when I attempted to strain it. Shucks. Luckily, these two would be around to take care of my mess the next morning. 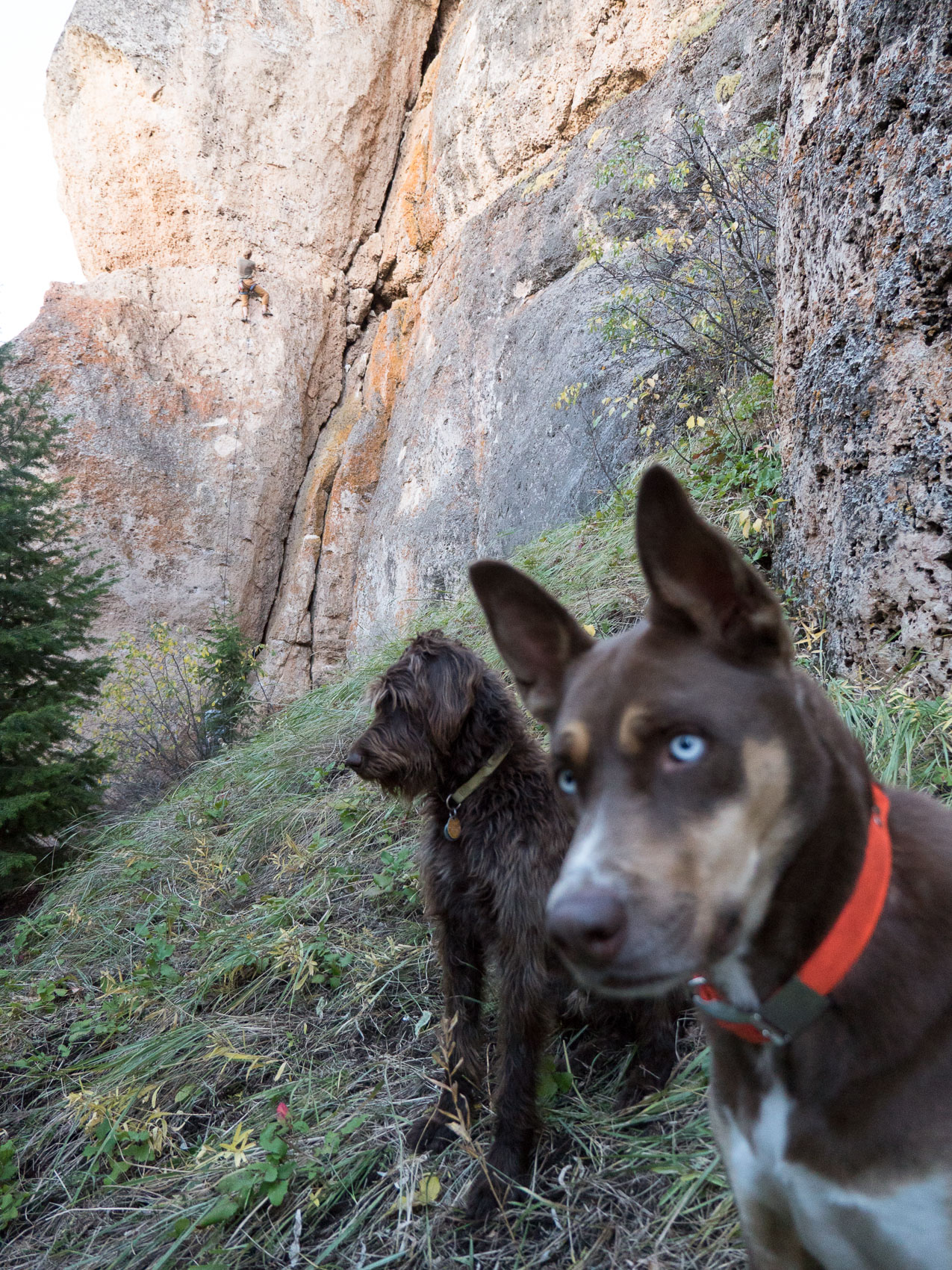 Pasta round two was a success. That along with a few nalgenes' worth of water had me feeling fine in the morning when I met Chad, Erika, Rebecca and Nathan.

Erika was another MP hookup, on her way from Ontario to the Big Stone in California. Rebecca and Nathan were owners of one of the three (!) other vans in the parking lot at the brewery that morning. Erika owned the third, and some other programmers owned the fourth. Yeesh.

Chad, Erika and I planned on Valhalla that first day. Erika was going to take off early in the evening, but Chad and I had plans to climb for the next two days. We let the parking lot crew know we'd be at the Ark the next day ("Oh cool, you can take photos of me FAing up there, we'll be there" - Rebecca) and drove up-canyon.

The shady temps at Valhalla were a surprise after the blistering warmth of the Brewery's parking lot, but the stone was perfect.

Chad and Erika warmed up on Acid Mother Temple, another favorite. I passed and led the way further down the wall to warm up on a new route to me: Stop Talkin' and Start Chalkin'. As I am wont to do, I set up a static at the top and skipped having to belay anyone in exchange for la photographia. 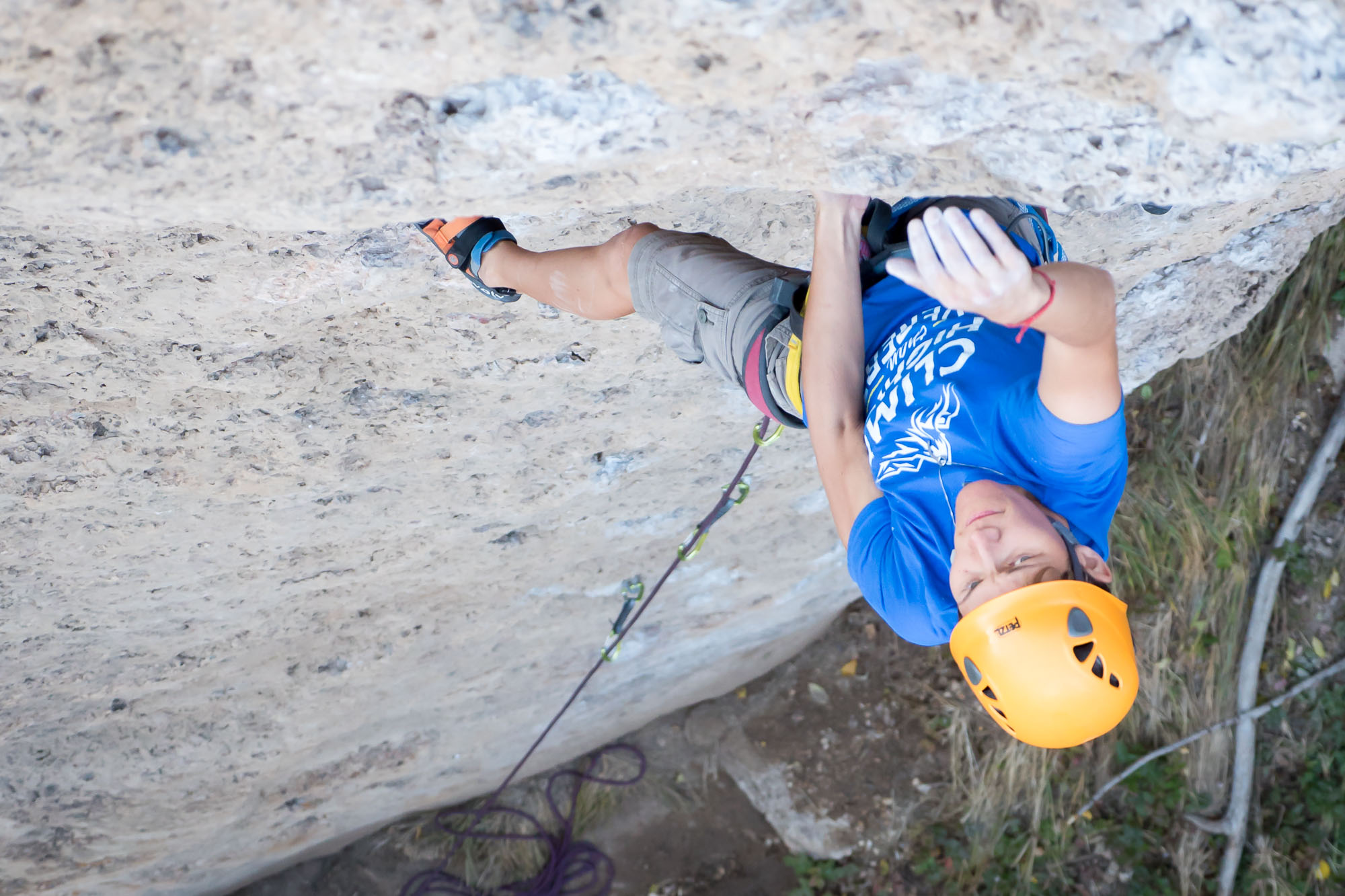 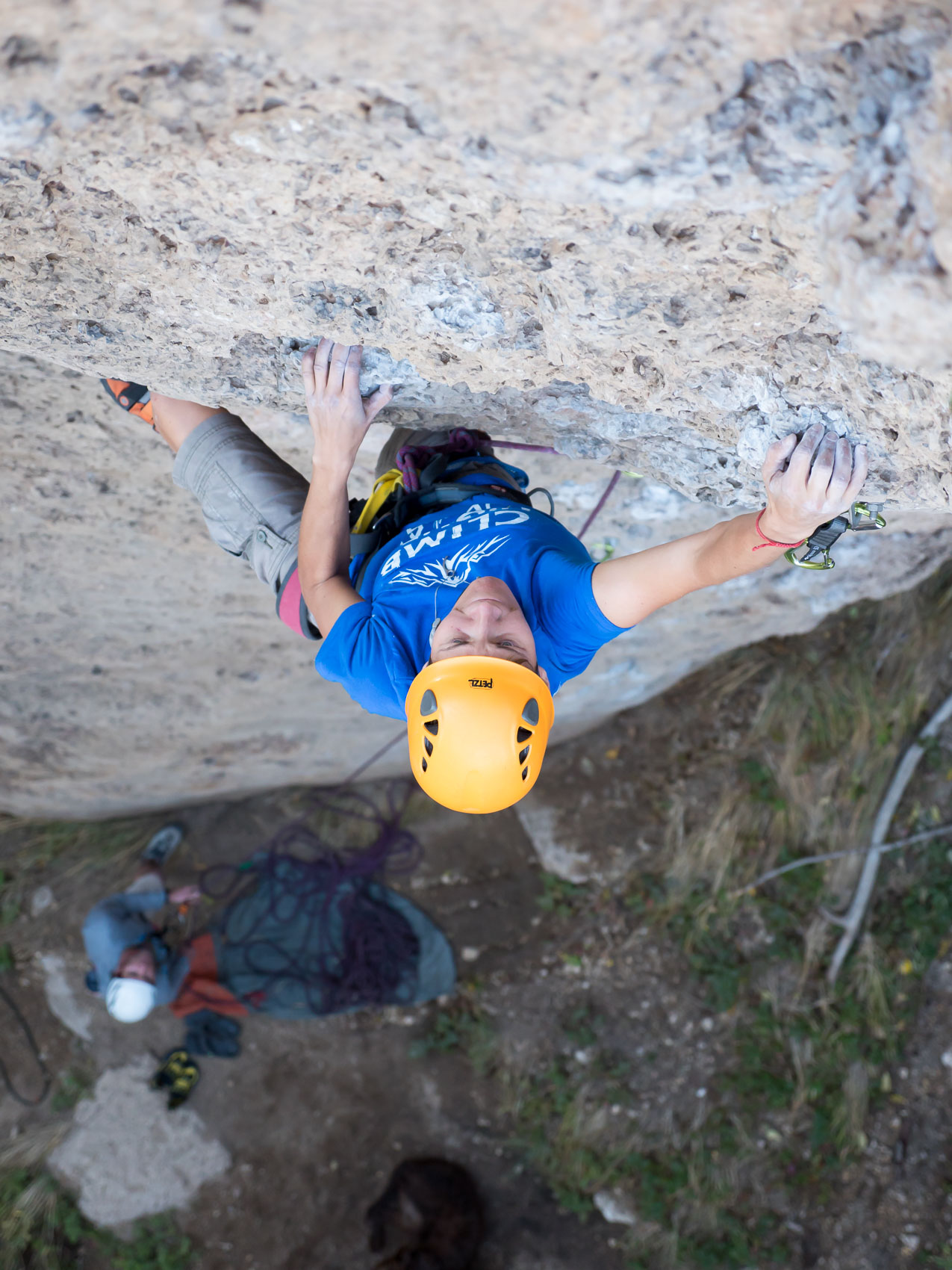 I gave Chad a lot of flak for his white and gray ensemble, but honestly, I think it captures the feeling of fall in the alpine quite well in retrospect. 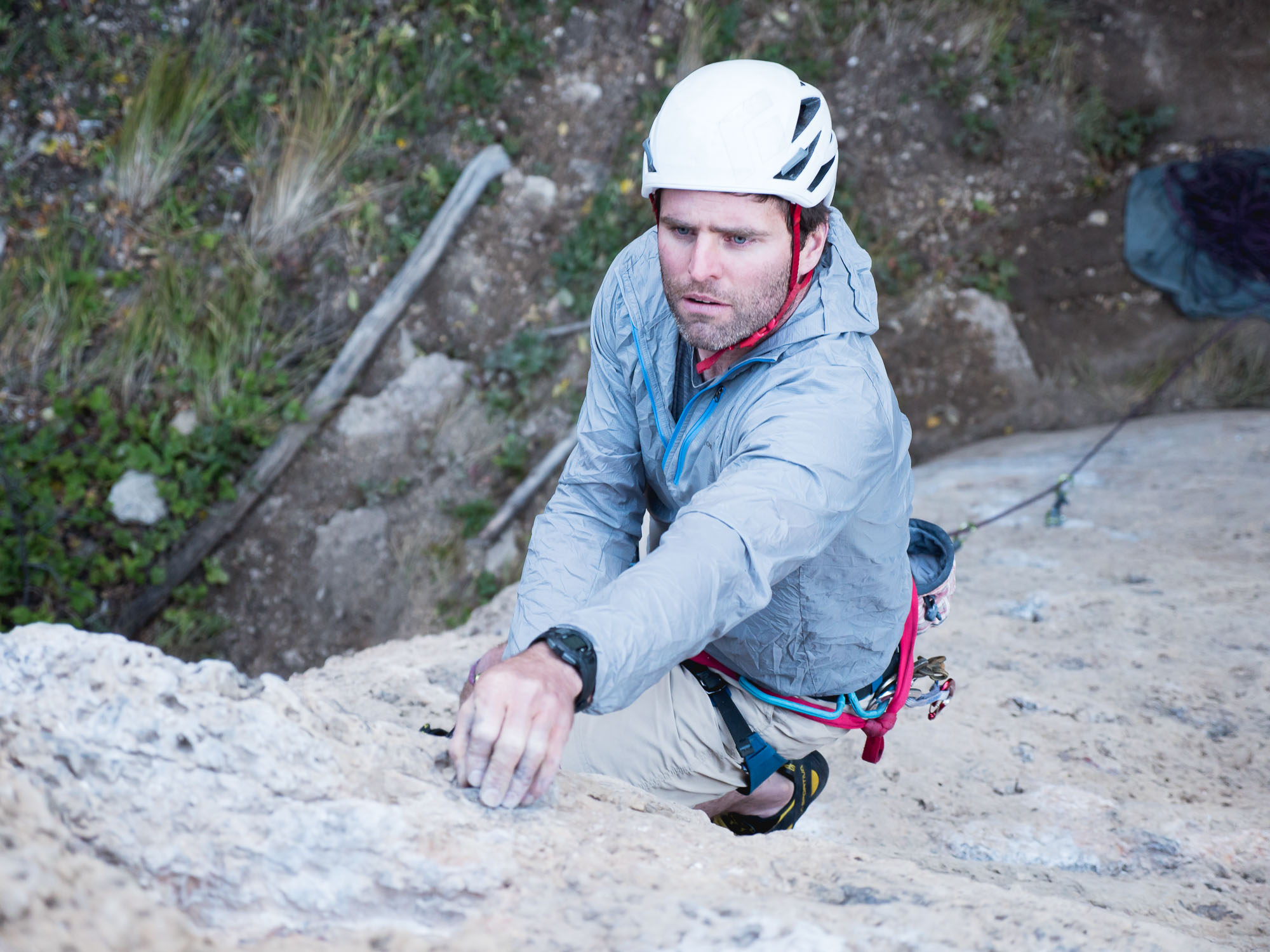 I told Erika and Chad to have a go on Pussy Control, the best route on that little wall. The reflected light of the sunlight snuck onto the wall above the trees, but they kept the ground in the dark, making for conditions with a beautiful light gradient. 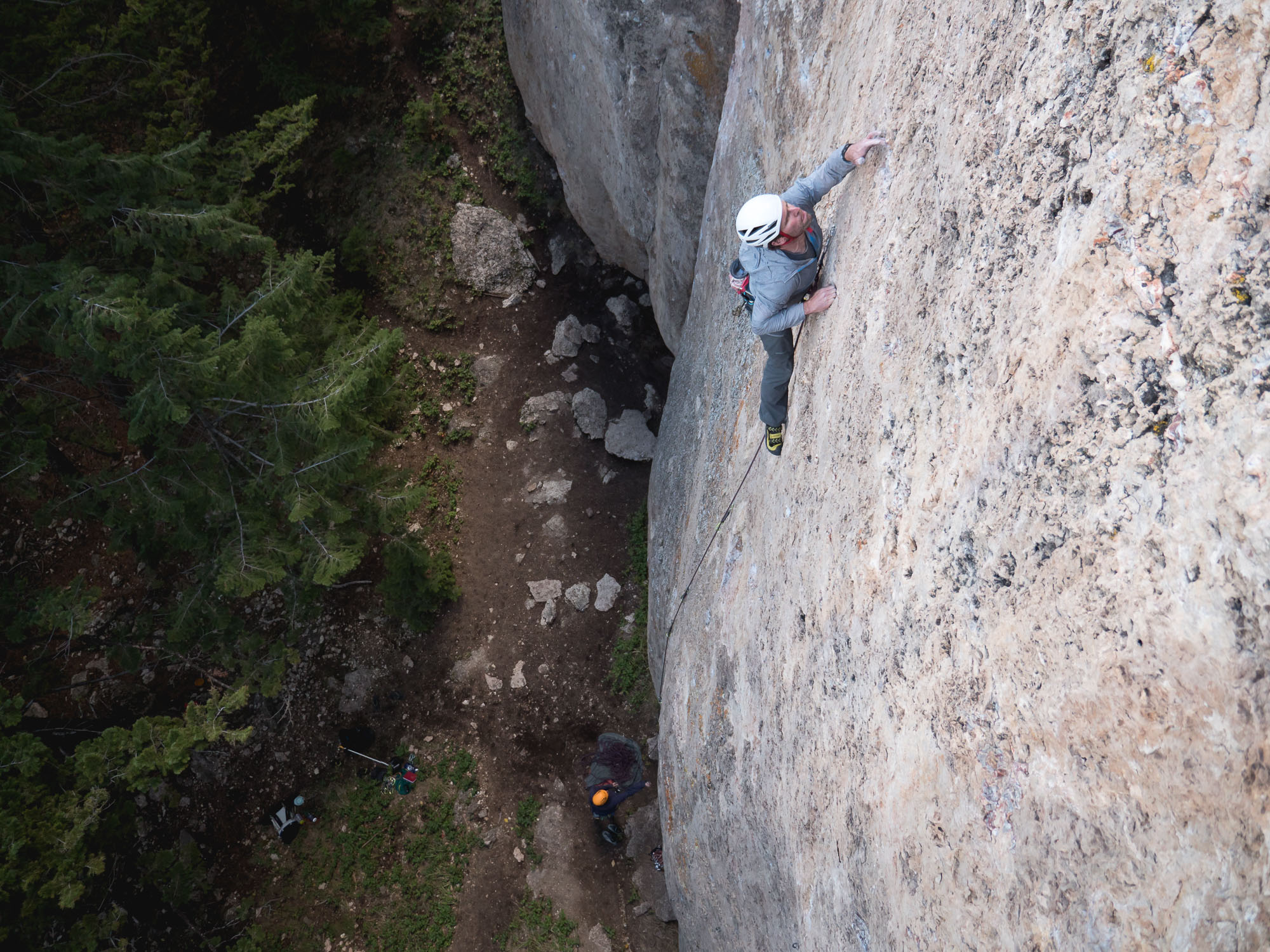 From there, I decided to finally get my redpoint on Hanoi Hilton. The first go, for whatever reason, was a bust with a good big whip. With the moves down the next attempt finally put it away. Horay!

Erika goofed around taking photos of dogs with my camera while Chad belayed me up there, but she did accidentally snap one of me too. 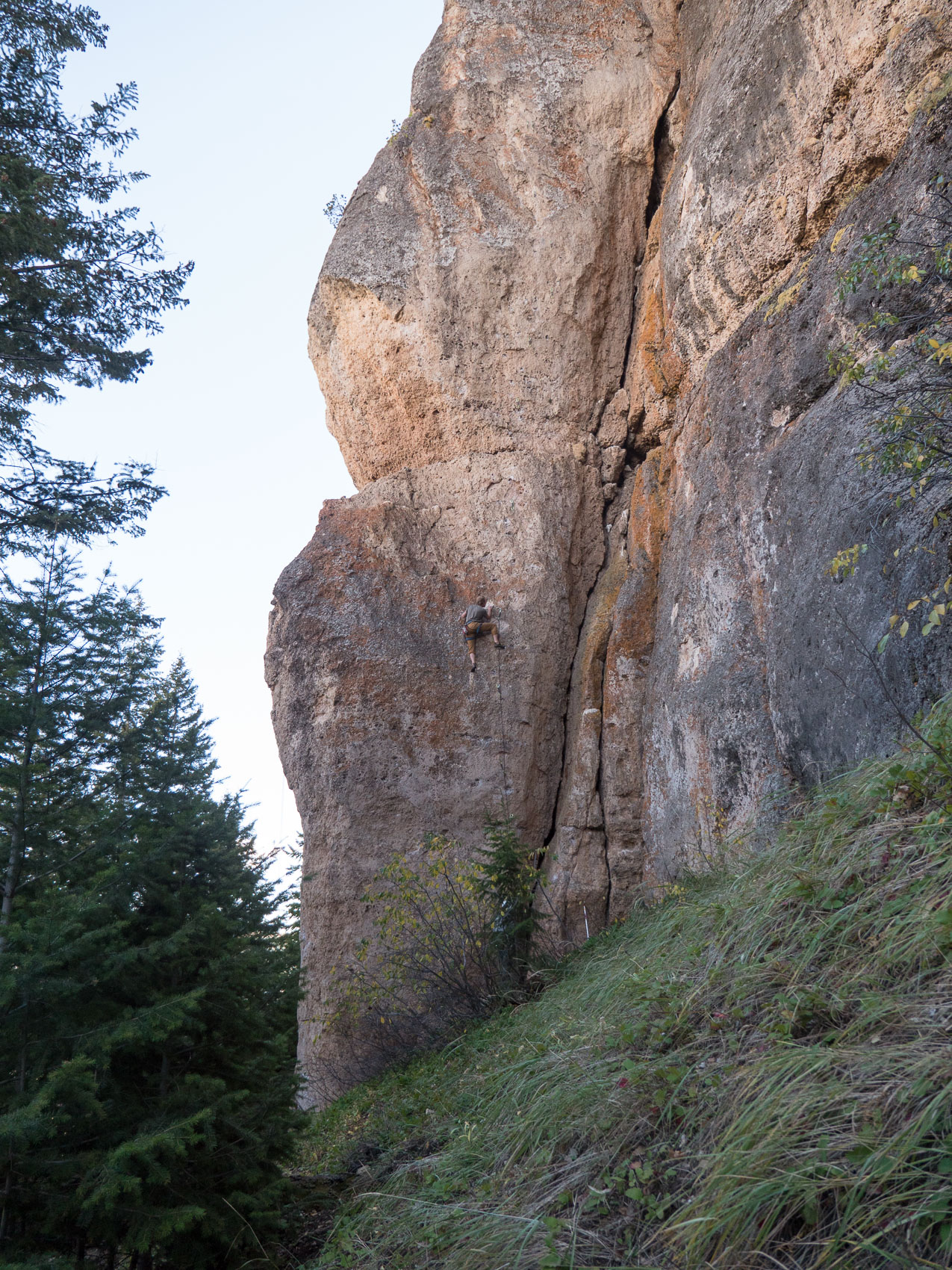 The new day dawned on Chad and I at our campsite up on the old road. We were holding down a spot I had slept in almost exactly a year earlier with Trudeau. Chad drove us back up the road just a little ways in his truck, which we abandoned to hike towards The Ark. 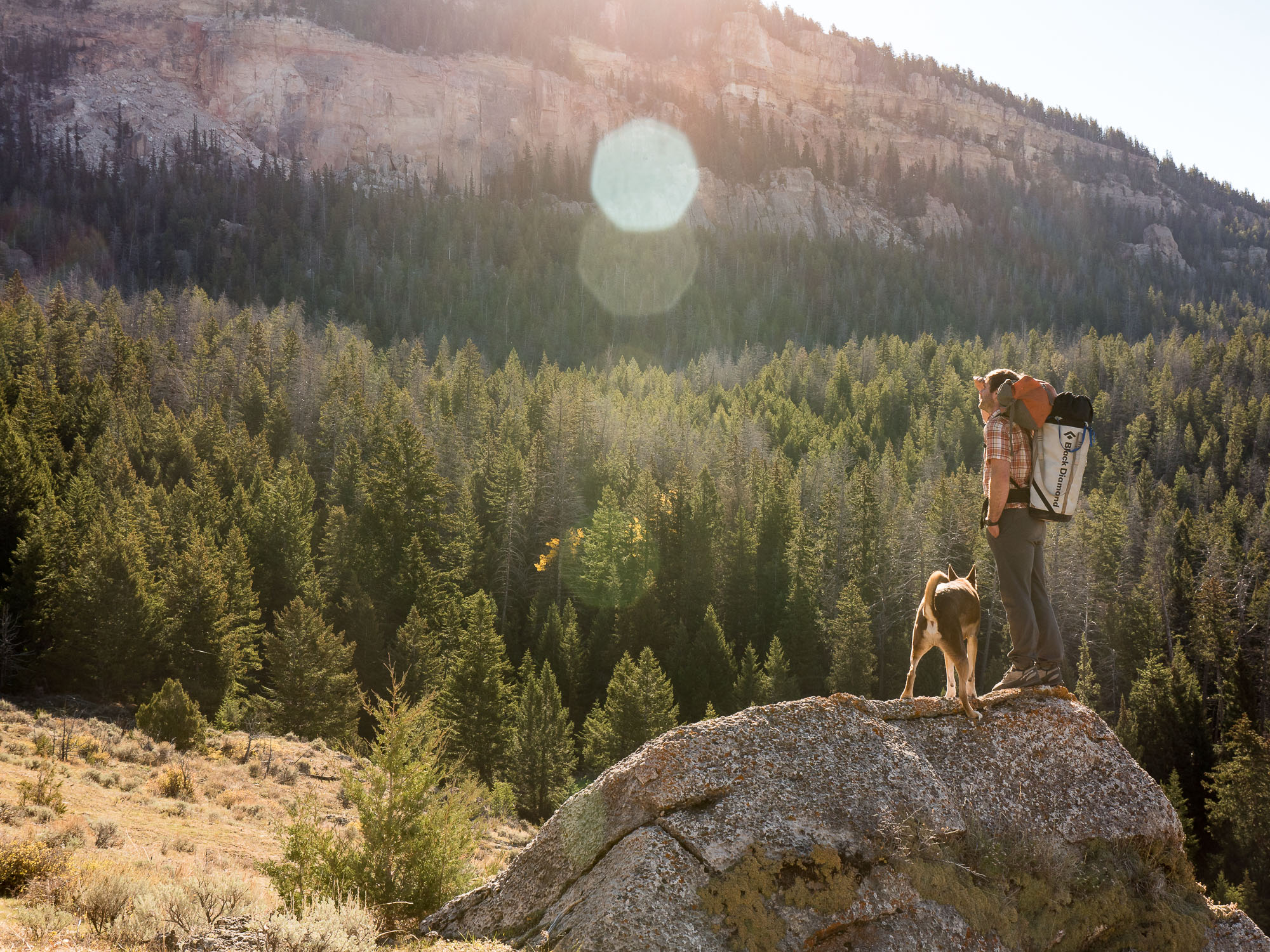 We got lost almost immediately. Or maybe lost isn't the right word here - after all, we had our eyes on our target the entire way. 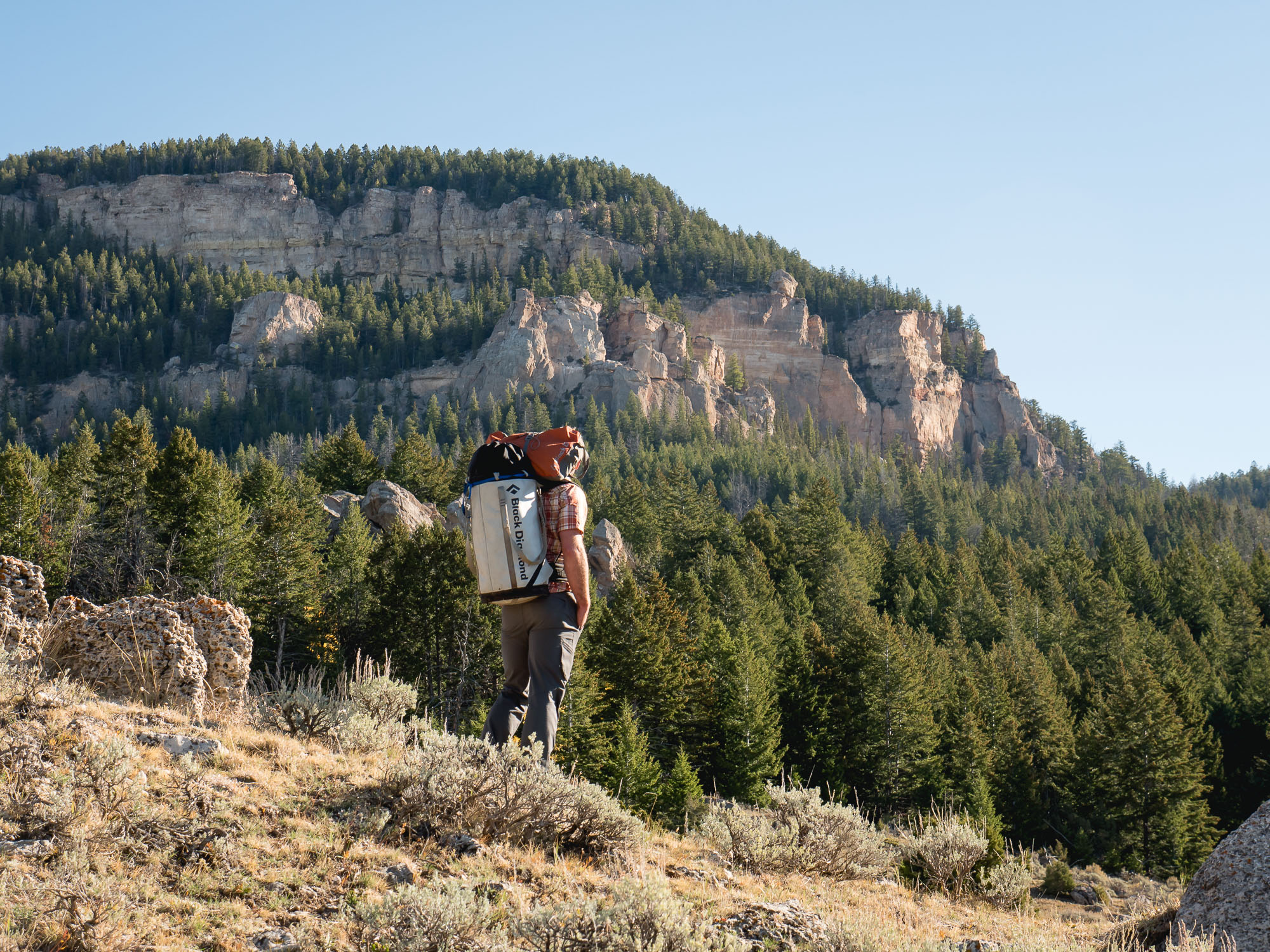 Chad and The Ark

After a good bit of time bushwhacking through part-time cow pastures we broke into the woods. With the help of some small cliffs and a meadow packed with sagebrush we were able to make a good guess as to where we were in the satellite photo in the guidebook, and from there found a trail with bright tape to guide us (thanks Rebecca and Nathan).

Traversing by boulder hopping at the base of the cliff got us to the Ark. Myriad fixed lines marked the hard work of the two Canadians, who had to have sunk at least half a grand of hardware into that wall, so far from their home.

Chad and I settled in to snacks before climbing, and it wasn't long until Nathan and Rebecca showed up behind us. They hung draws on the 11b (with 11d extension) warmup. 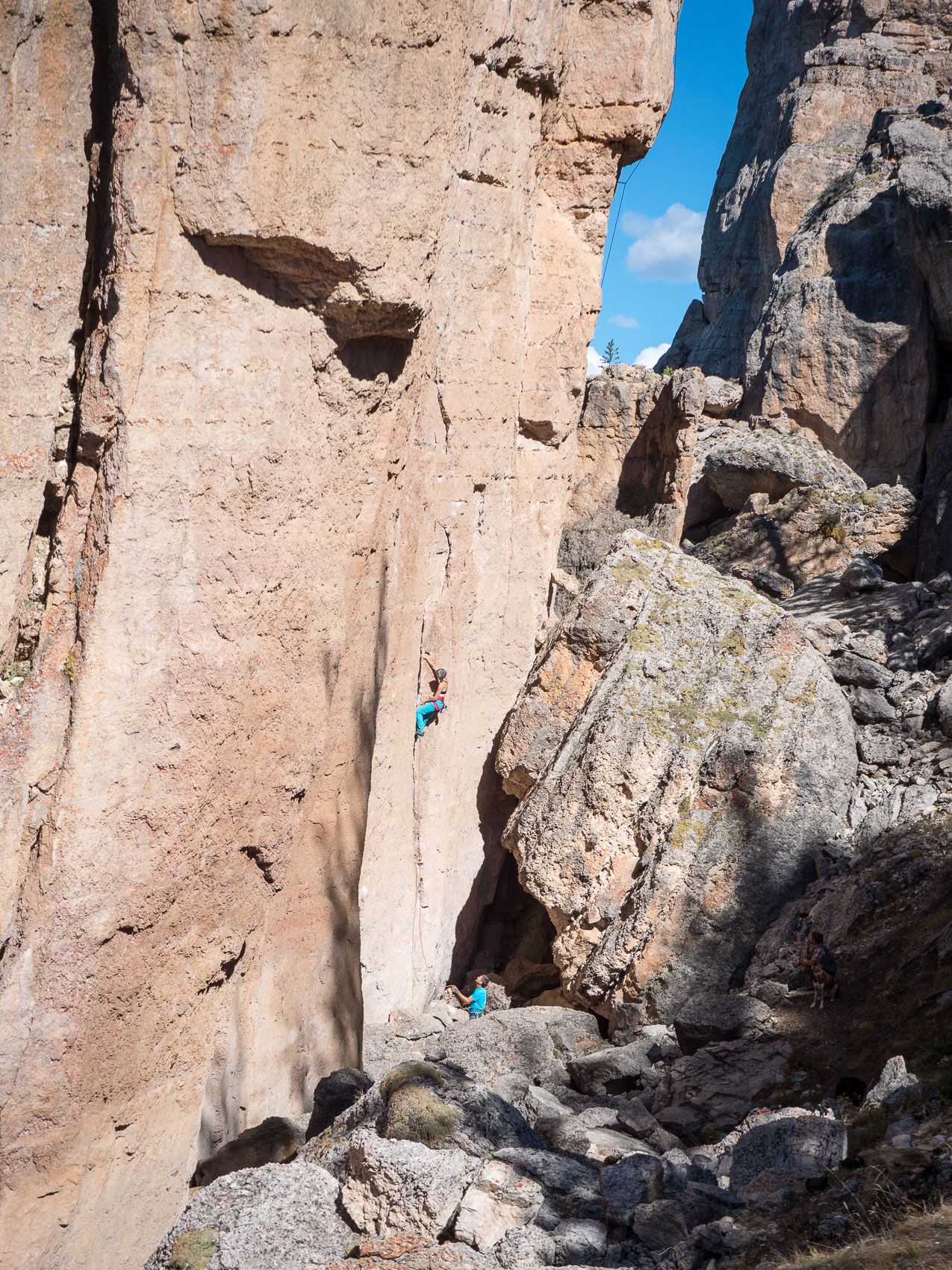 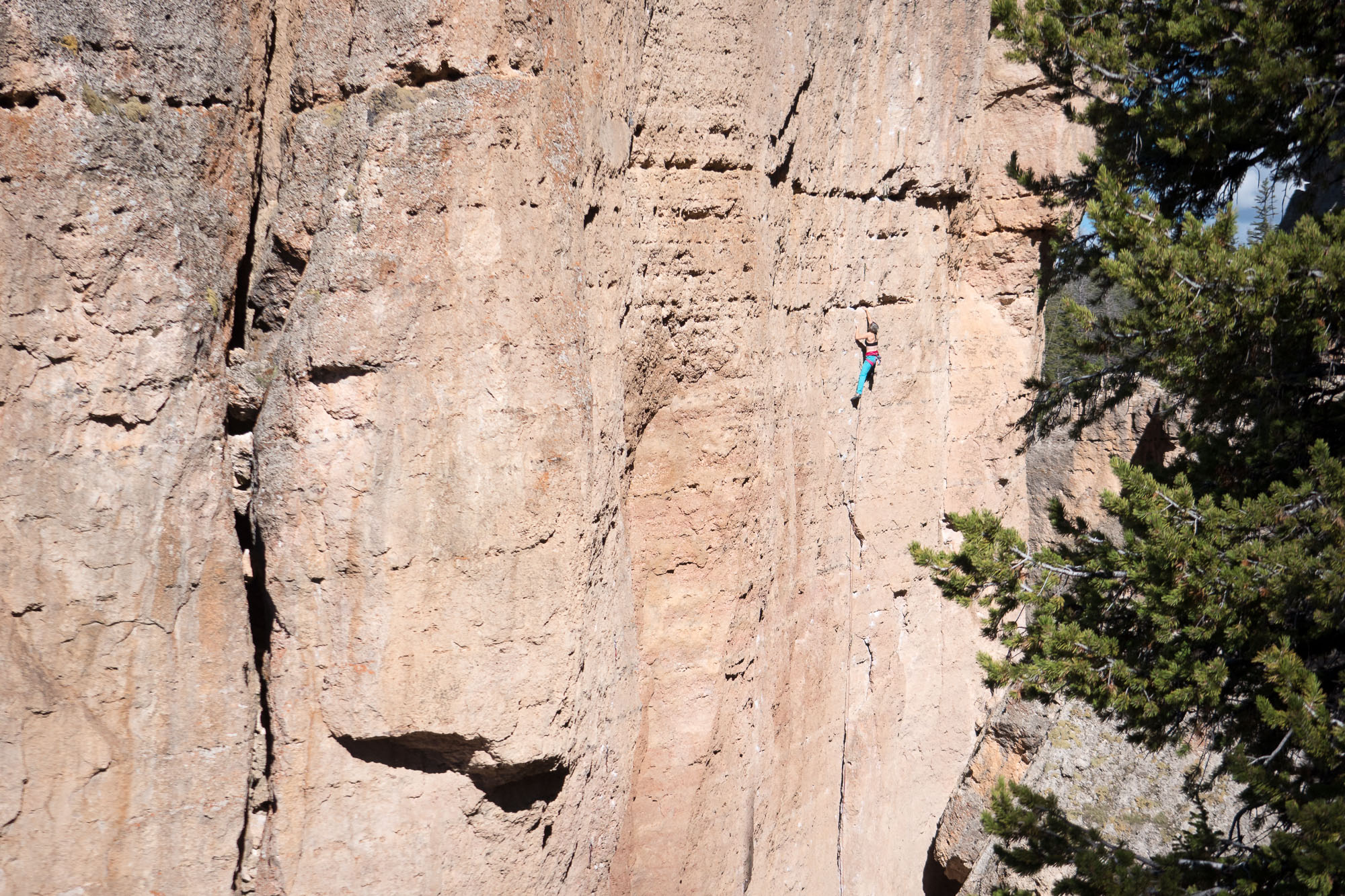 The wall was beautiful. The Ark is an enormous detached boulder over one hundred feet tall and even longer abreast. The sun was on it only briefly. The routes were characterized by the horizontal pocket lines (HPLs, as Huey calls them).

It just felt so damn big when you were around it, in a way that cliffs normally don't as they blend into the landscape.

Seriously, it was tall. 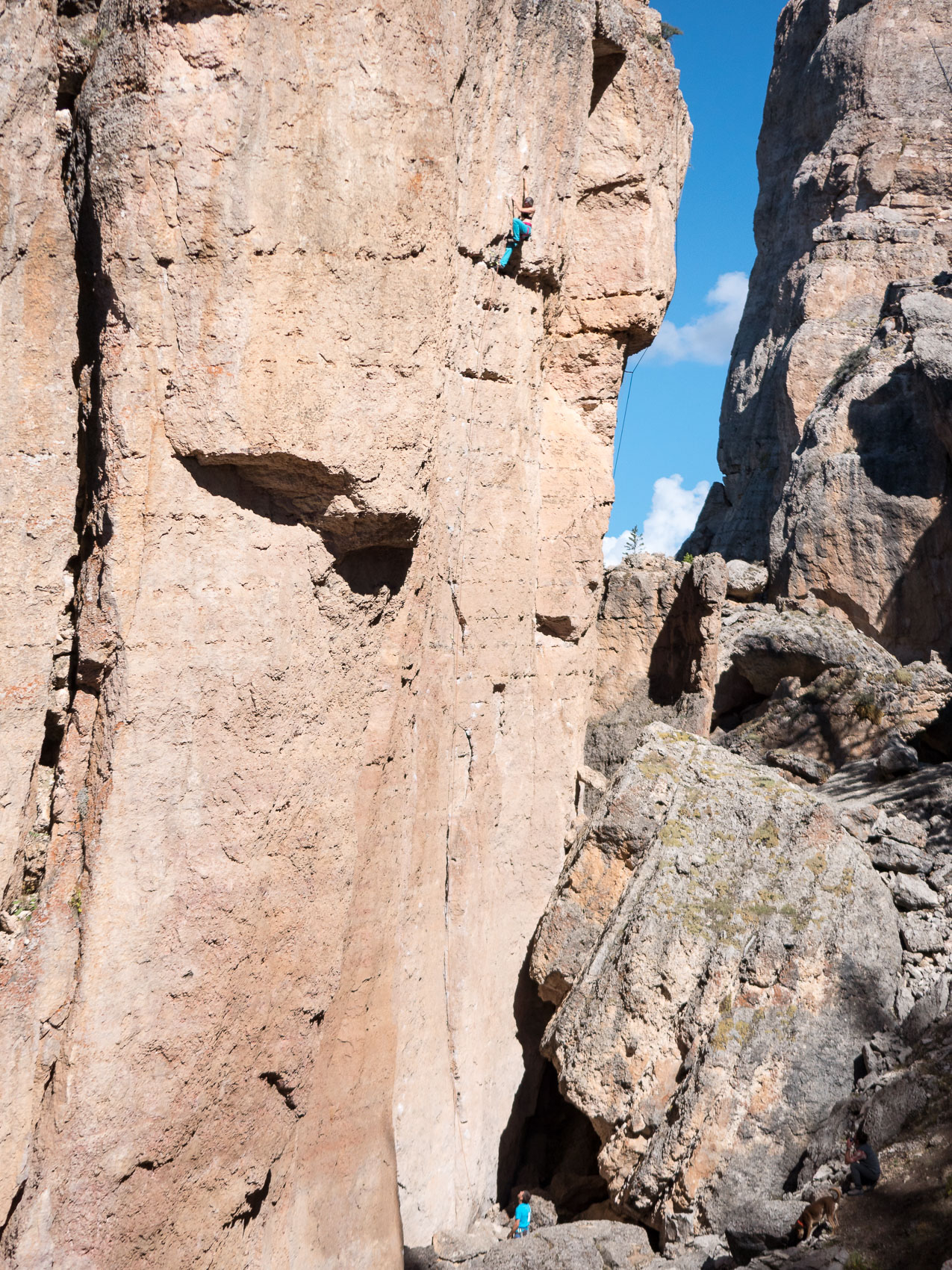 I had my best day of climbing of the year that day, playing on nothing but hard routes. Best of all, I got to shoot the amazing effort and concentration Rebecca put into FAing her route Happy Pants, 12b. 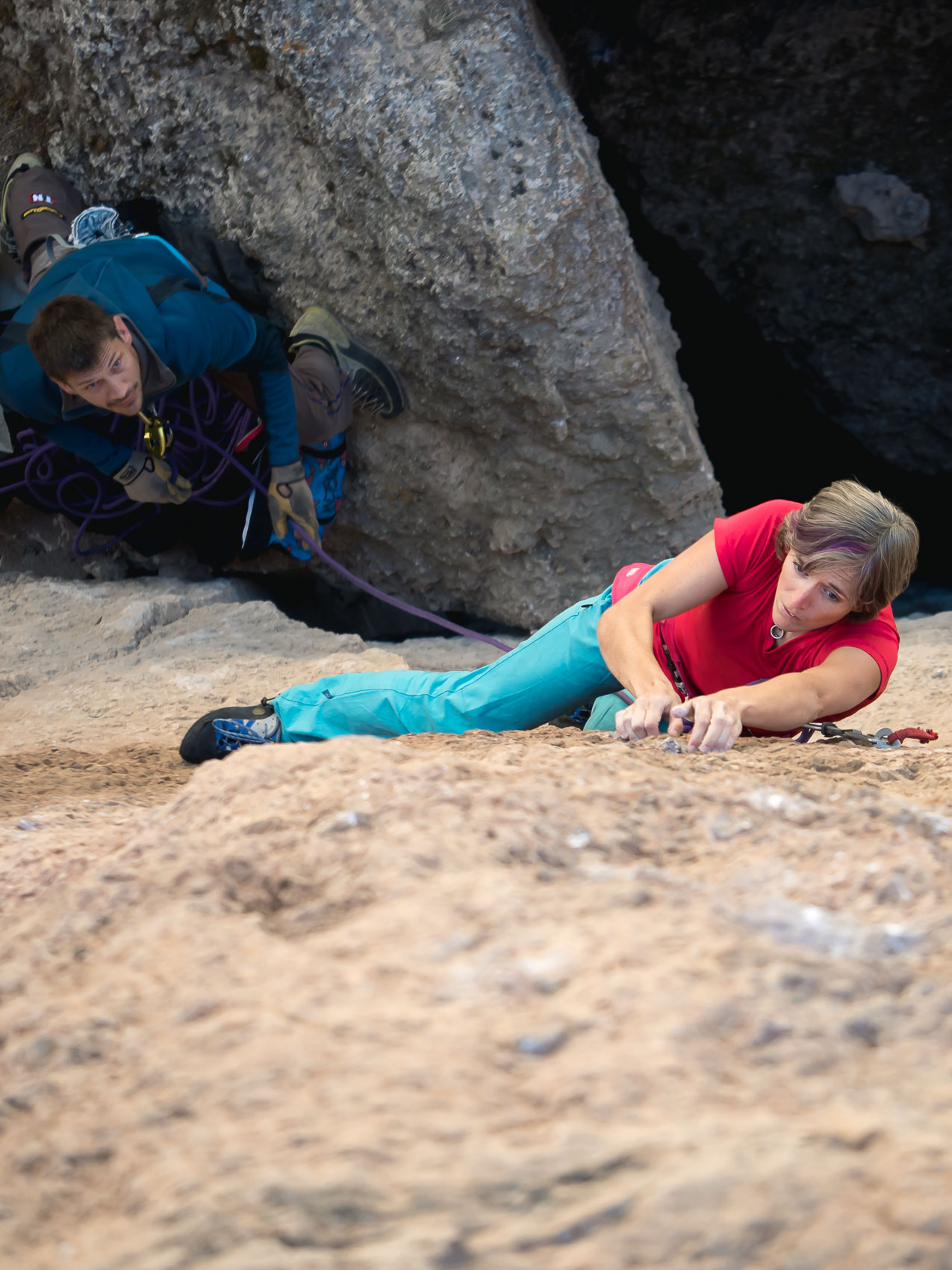 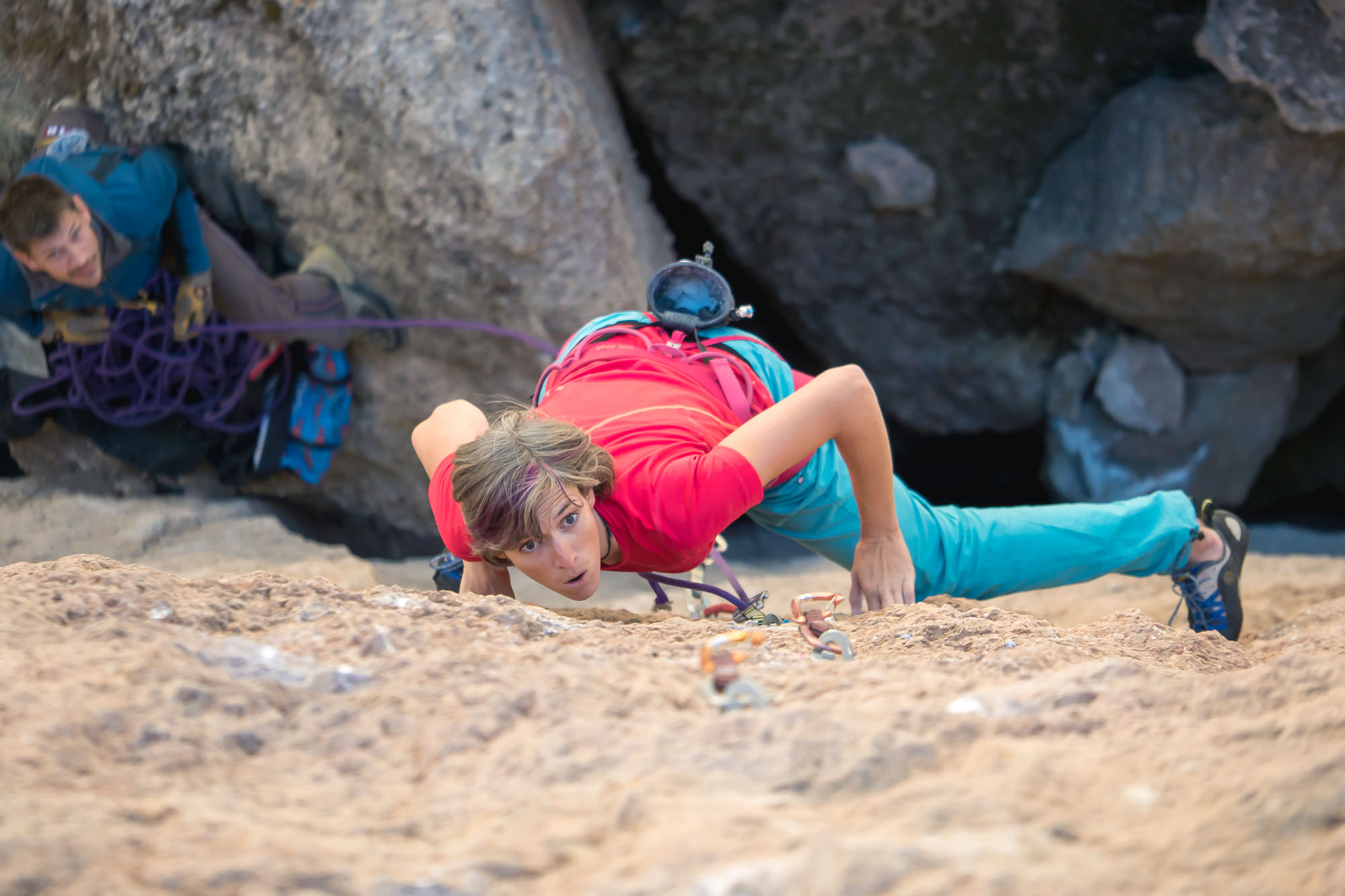 This little deadpoint sequence was pretty fun with a burst. 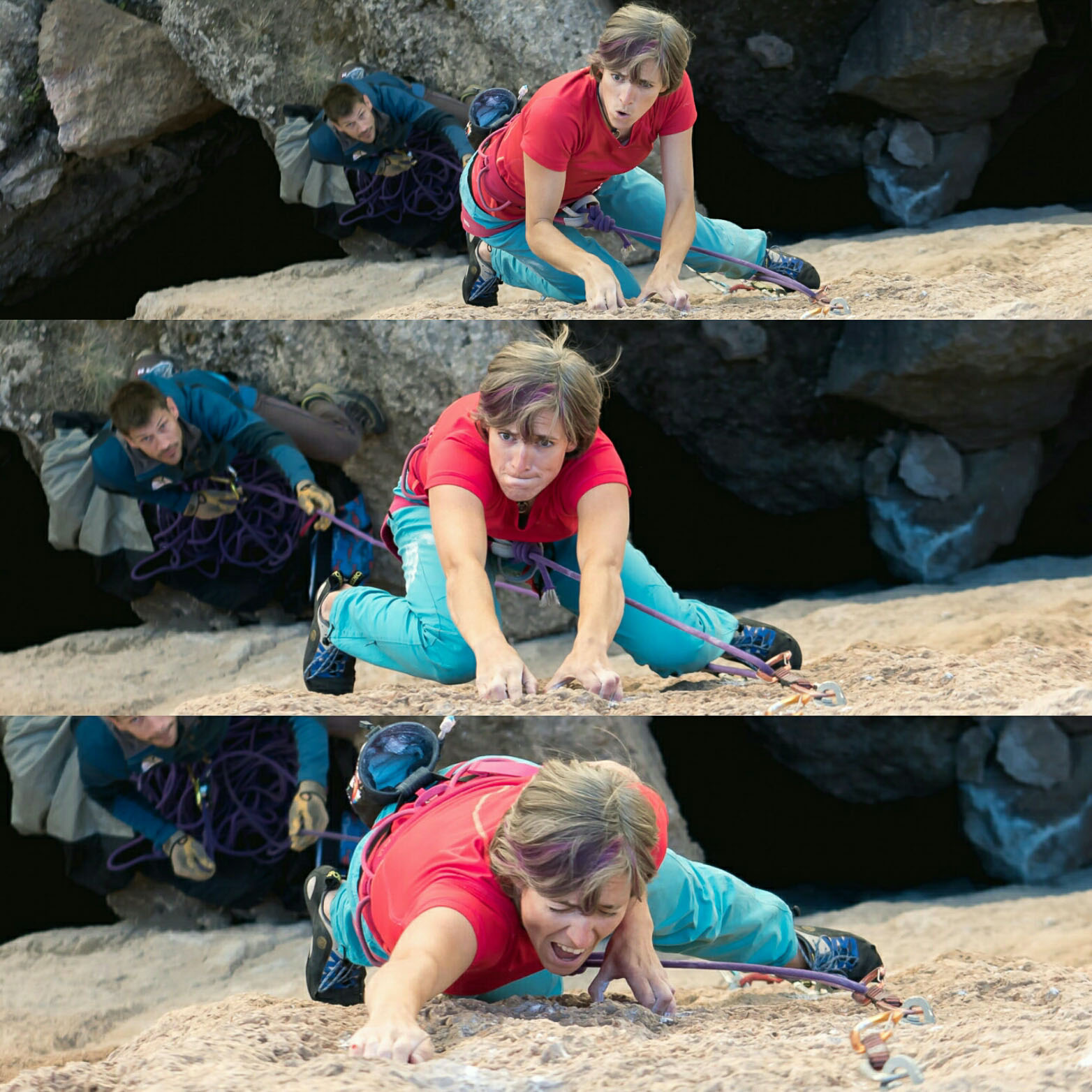 Many good things came from that shoot, like getting invited to hang on fixed lines with Rebecca and Nathan in the Winter as they go ice climbing, or being asked by Frank at the Tower for a print to put on the walls at his place.

Chad and my's fire time got cut short that night as a storm rolled in. The next morning the rain was still coming down. 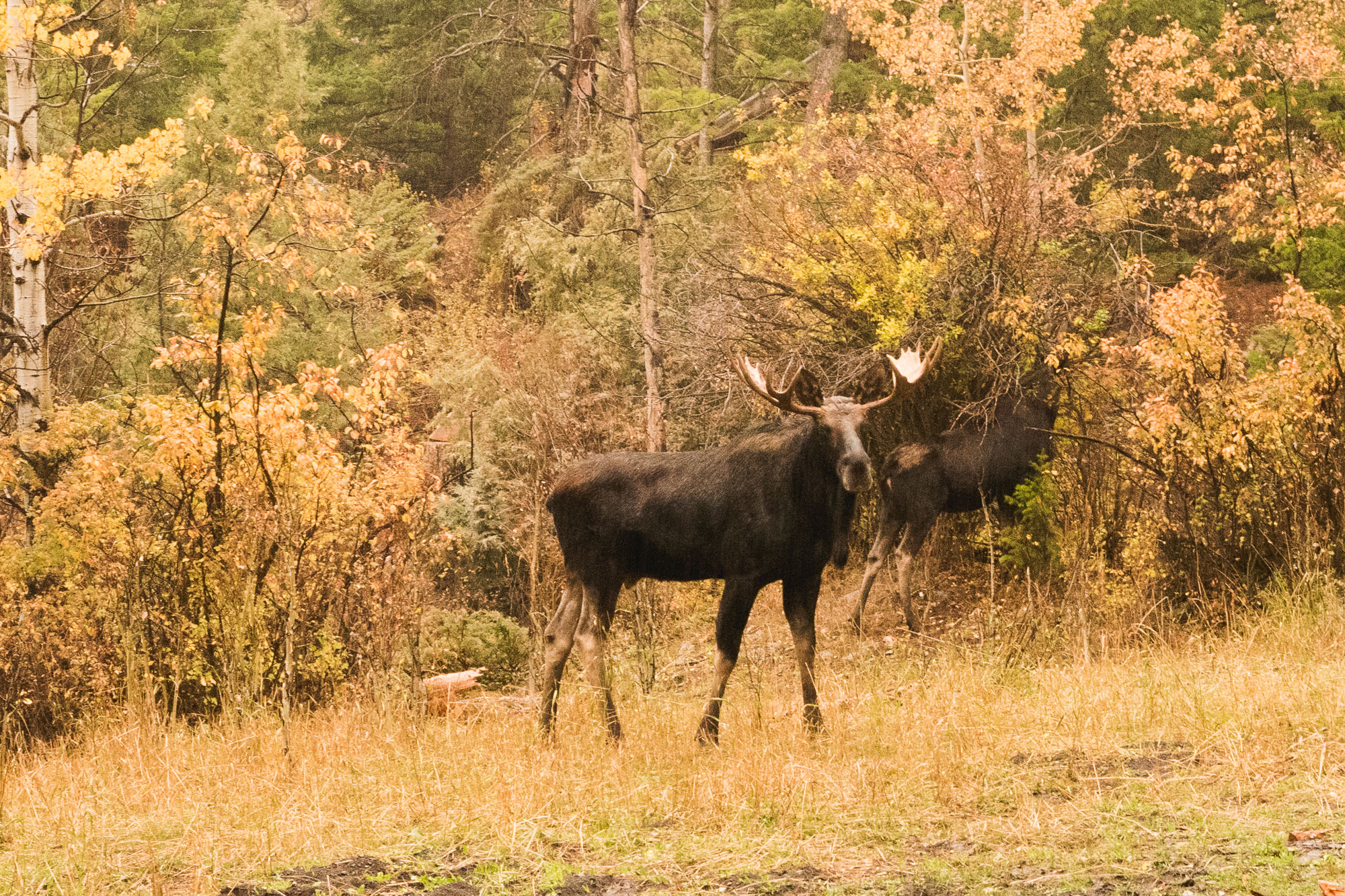 While the area's Meese didn't seem perturbed, Chad bowed his head to the writing on the walls and called the trip quits a day earlier than planned.

I drove down to the Brewery to steal some electrons and wifi, and maybe pick up some chicks... 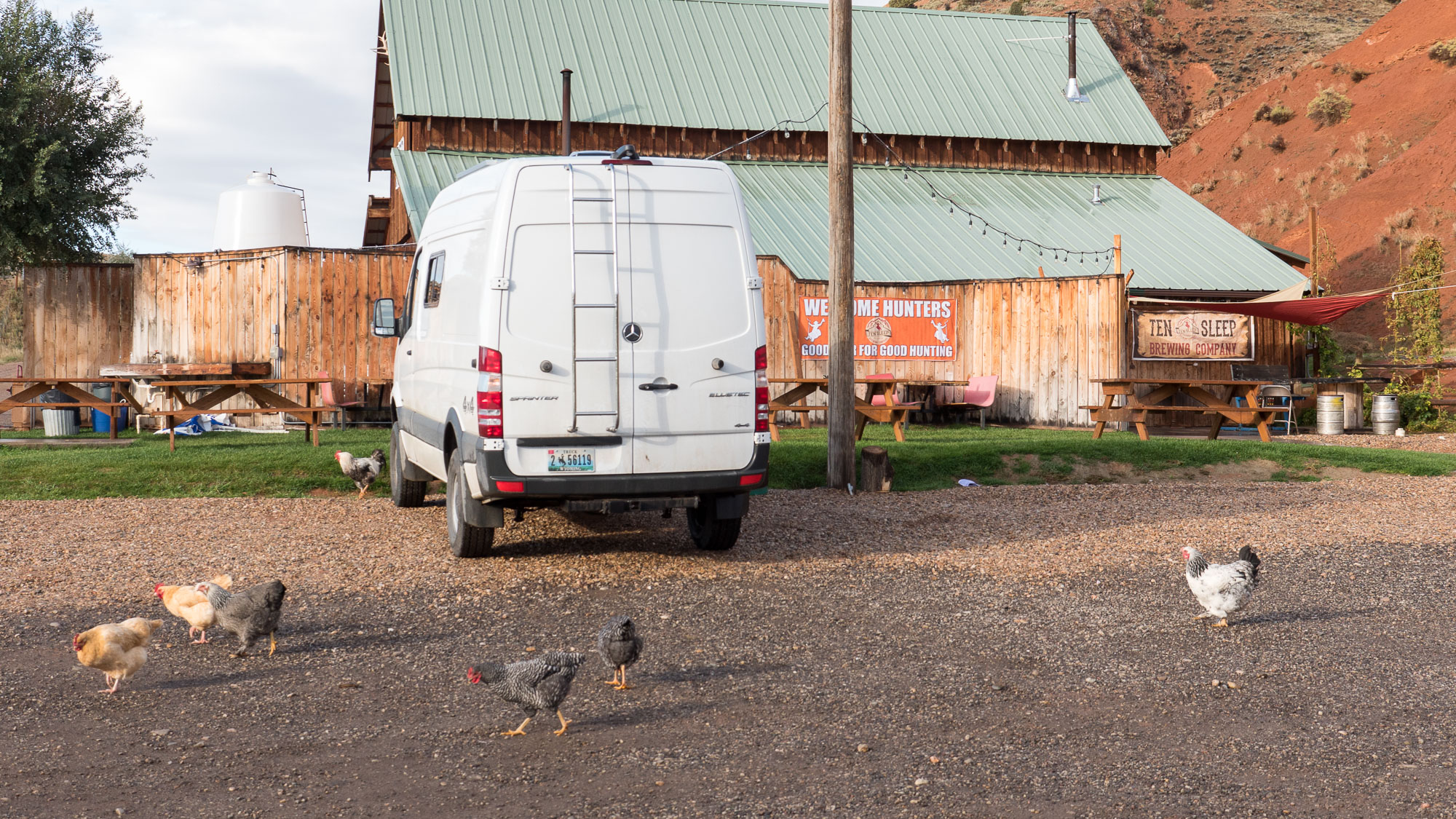 ... before rolling on to Casper after the rain had cleared up. 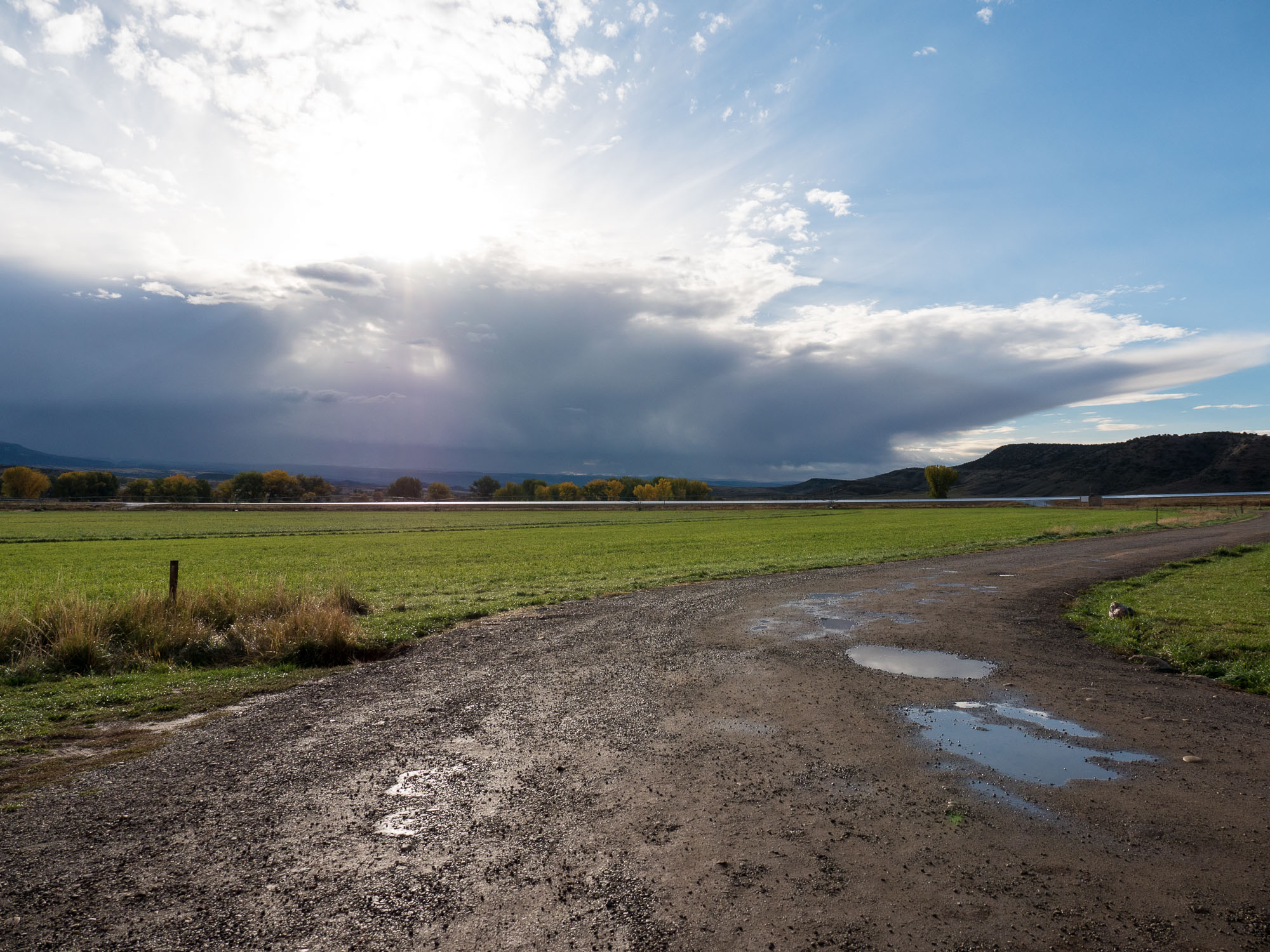 In Casper my in-laws met my parents for the first time over dinner. I slept near Fremont Canyon's bridge that night and woke up to remnants of the same storm that had chased me out of Ten Sleep. 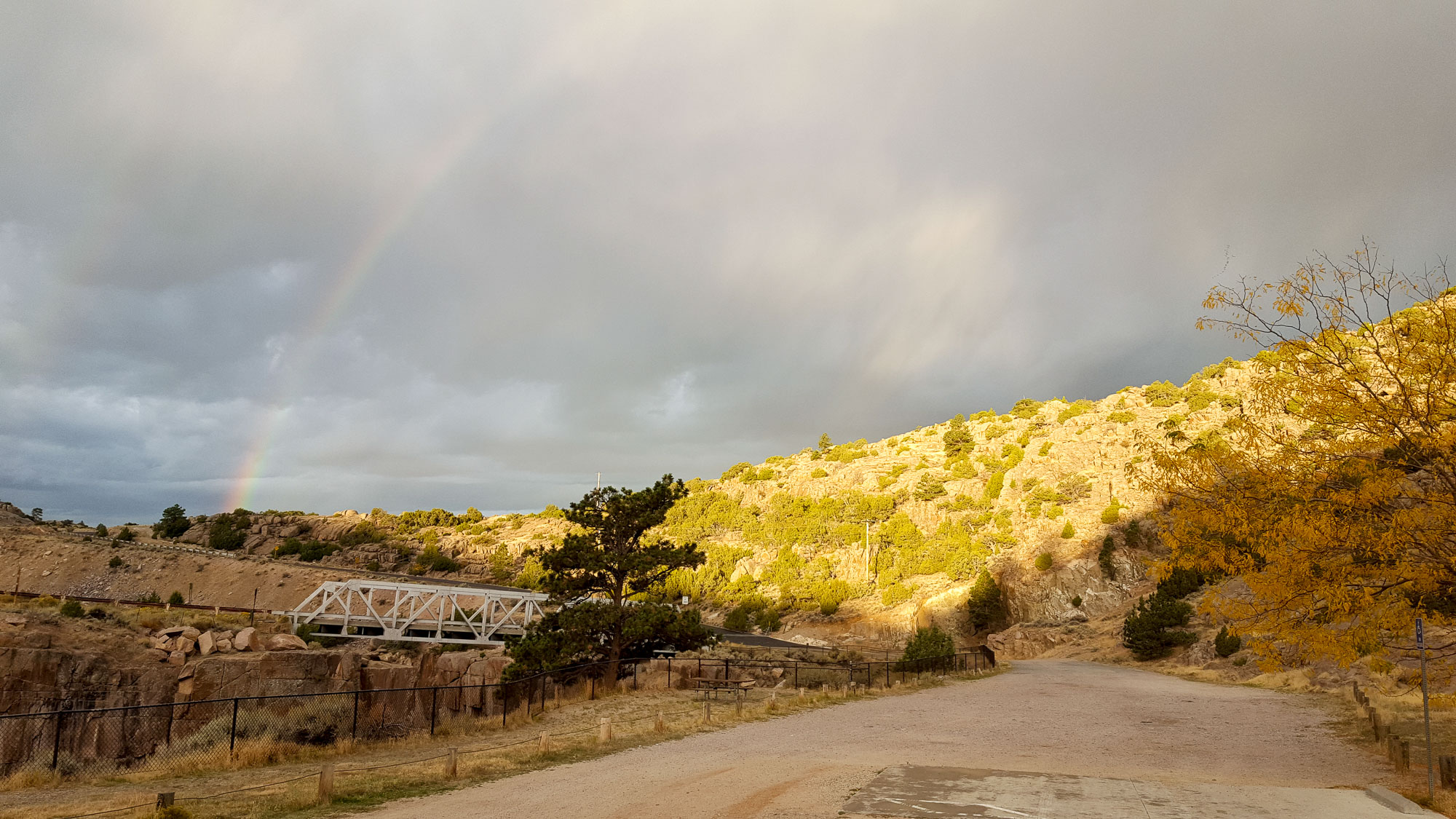 Halfway up a lap on Wine and Roses the skies opened up. The rock, for the most part, protected me from the wet. The rain didn't need more time than it took me to dismantle my anchor to soak through all my clothes, though. I ran through wind and rain back to the van, changed into dry things, leaving my rope and clothes to soak the floor, and drove the rest of the way to Laramie through a gawds-damned monsoon. 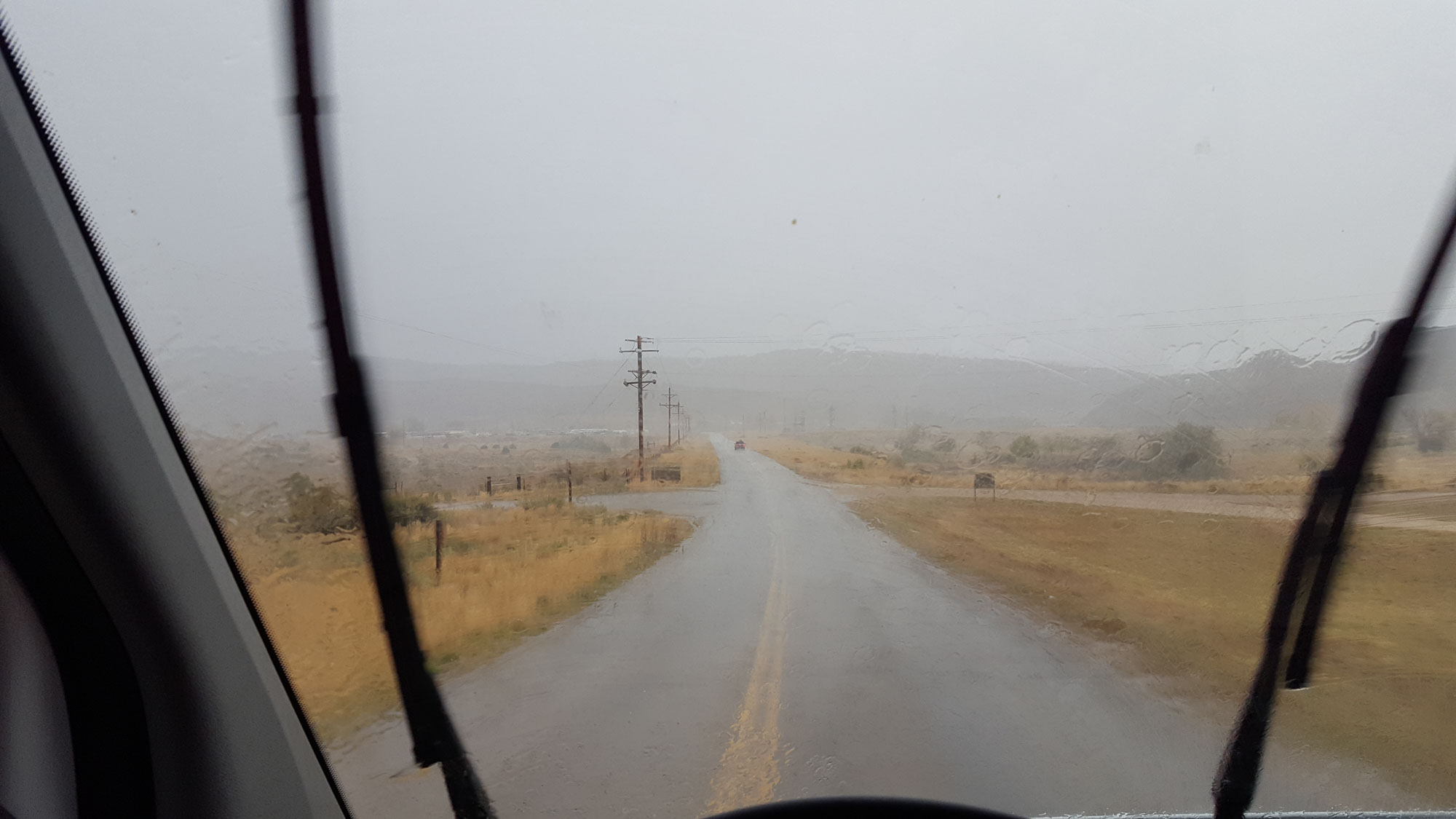