What felt like a full month of climbing in Vegas, with all new partners. 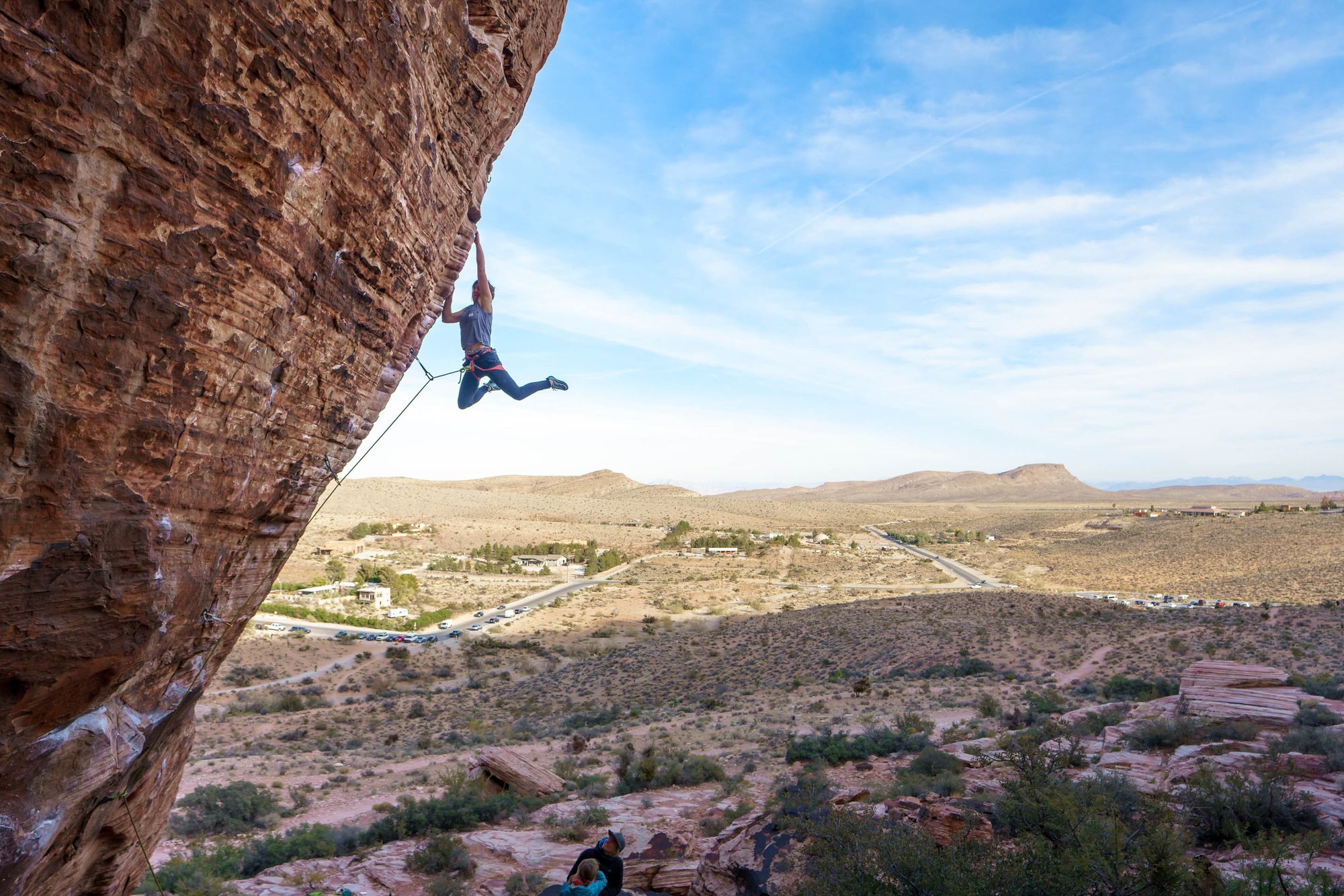 Saying I hit a life crisis would be an extreme exaggeration, but at the end of the summer a choice loomed large.  Unsure what exactly I wanted to do next in life, I examined the facts.

Given my fondness for the town, I thought the conclusion to draw from those three nuggets was that I should buy a house in Lander. But that gypsy heart of mine argued, "Lander is seven extra hours away from everywhere else you'll want to go." Meanwhile, I'd been talking and talking about how I'd love to move to Squamish if only I could make it work...

I took my woes to my Adult Friend Nate Smith, whose qualifications include: Business Owner, Domestic Partner & Domicile Erector, and Progeny Spawner (to name but a few). After reading a large block of entitled angst from me on Facebook Messenger, Nate's wisdom flowed thusly:

Nate: Sounds like you’re a good candidate to be a renter for a while still

Me: buying a house is foolish? heard

Nate: Nice cross between nomad/van and renting rooms in cool places here and there.... I mean  c’mon how dope is that?!‌‌It’s not foolish if u want to be in 1 place 95% of the time‌‌Otherwise it is foolish.

Indeed, being a part-time resident of all the places I love and still travelling to heart's content does sound pretty damn "dope", Mr. Smith.

And so, Matthew doubled down on his commitment to non-commitment through the coming year. Nearly simultaneous to this turn of events he received an invitation to a 30th birthday party in Vegas with a group of climbers he'd never met.

The woman of the hour was the lustrous Jen Hanke, first encountered in a creekings nine-months-prior.

With her came señor Chris, a man of great geniality and even greater Henleys.

Adding some spice to their partnership was Luis - may we all be so lucky as to have someone like Luis as our third wheel / master-bedroom-guest.

On this foursome's (that includes me, y'see) first day of cragtimes two gents made a guest starring appearance that proved so popular the director had no choice but to make their roles recurring.

Jen was sweet 'n strong enough to hang my draws. I sussed out the crux, was happy to be able to pull on very small holds, and sent it second go. Hawt damn!

Vegas Will Be Dead To Me When Darren Moves

Two more joined us at the AirBnB, but allow me to hold off on their introduction and instead tell the tale in the order of routes climbed.

There are two men I must see on every trip to Vegas. They are Gary, my oldest college friend - perhaps one of three friends in the world with whom I did not bond over climbing - and Darren, who, to put it succinctly, is the man.

Darren and I went out to Brownstone Wall with no firm plan, knowing that whatever we wanted to get on would have people on it. That's how we ended up on Kentucky's Finest. an infrequently climbed route (no chalk to guide us, oh no!) that was heads-up in the most perfect of ways.

We got spooked, we got psyched, and we got butt shots. What more is there to ask for?

From our perch on Brownstone we could watch four human beings I would get to know over the next few days. Jon and Kate were laboring away on Cloud Tower; Eric and Mandy were flying up Rainbow Wall.

Party crag day!!! The day after our brownstone adventure, Darren and I sent the crux approach from Calico Basin to Stratocaster, circumventing the loop. We met up with the whole AirBnB gang, and some Squamites (that'd be Eric and Mandy) to boot!

Jon and Kate invited me to join them on Risky Business, a four pitch 10+R outing. I thought it'd be a nuisance having me along, but I think it's safe to say we all found our party of three situation pretty dreamy!

Without a doubt, my favorite photos of Vegas came from this day. Oh, and favorite memories goes without saying. Don't tell Jon or Kate, but they're totally two of my favorite humans as well now, having shared such a great day with good spirits and camaraderie.

All too soon the AirBnB crew rolled out of my life. After so many good nights of Space Base and Coup, so many mornings of coffee and noms... the gang split.

Lucky me, a half-jokingly sent "buy a ticket to vegas and climb with me" was received in earnest by my buddy AJ. A day after saying goodbye to Chris and Jen, and only hours after I said goodbye to Kate and Jon, I picked AJ up from the airport.

We hit the grocery store, smashed a dinner and hit the sack. We woke up Friday morning and, techie pals that we are, worked the morning away on le wifi. Only by late afternoon were we driving the loop. We hiked out Pine Creek Canyon, thinking thoughts of Birdland and Dark Shadows.

At least four parties were on Birdland. Some pros and cons and quick business analysis from AJ kept us walking to see what the crowds on Dark Shadows, a 5.8 corner immediately next to Risky Business, looked like.

We arrived at the base as the last party on the route pulled their rope. It was ours for the taking. To think sloth isn't considered a virtue!

AJ hadn't been on real rock in quite some time, and after evaluating how he felt following the first two pitches linked together asked me if I'd mind leading the rest with guilty eyes. Hells no I didn't mind!

The third pitch of that climb might be one of the best I've ever climbed. I was continually stopping to exclaim things like "No way!!!" or "Whaaaaaat!" or "This is fucking raaaaaaaaaad!!!" Truly, I had a bad case of the stokes.

The fourth pitch was a good adventure to finish the route on, and the exit went smooth. I reckon AJ had a pretty baller first day in Red Rocks, especially given our apres-climb hot tub time!

Dark Shadows was just a preview of what was coming up. AJ and I woke up bright and early the next morning and busted out some thirteen pitches climbing Solar Slabs via Johnny Vegas.

We went fast-n-light, planning on doing the walkoff through the Painted Bowl for the full experience.

AJ gave me the privilege of guiding every pitch, and oh my, what joy I had.

We lucked into a no-crowds situation: a party yielded right-of-way to us at the comfy staging area between Vegas and the Slab, and the party ahead of us was simul-climbing and so went out of sight the first two pitches.

Things went swimmingly. I linked pitches 3 & 4 for a pretty great rope-stretcher that set us up for another epic link: a 70M crack climb by linking 5 & 6.

Downside being, we were on my alpine 60M rope.

I gave AJ a quick introduction to the concept of simul-climbing, got him all prepped for the switchover, and started up the crack. Not five feet up it I stopped, looked down at him, and added,

"Oh, one last thing. You can't fall. If you fall, I'm getting helicoptered out of here. 'Kay later!"

AJ took it all in stride and rocked it like a seasoned pro. Hats off to the guy for off-the-couching a 2000' Red Rocks day.

The view was indeed something up there, and we had all the sunlight we could ask for for the exit.

The three rappels on the way out were a bit more adventurous than anticipated but we made it through. That hike out though... damn. I got over the creekbed hiking much sooner than it gave up on me. We both let out big sighs of relief when our beat-down feet finally got back on the packed dirt trail.

I woke up the next morning and AJ was already on an airplane back to Portland! I drove to the airport anyways, as I had a man to pick up:

Ben was another Squammy, and it was his ridiculous generosity that had set AJ and I up with a place to crash and a hot-tub to soak in. I kid you not, two hours after meeting this man he gave me the key to his house to use as I pleased while he was out of town for the next week. My return payment? Work some hard sport climbs with him in the following days.

We pretty well settled in on New Wave Hookers, 12c, for the proj of choice.

After a day of good one hangs, Ben wrote the route off. Then the next day, Tony and Heather went back to Cannibal... well, why not give it a go? Ben pulled the send off that day. The rest of us just spent time in the air - down and up. Wooo dynos!

Working such a bouldery 12c was good for this fat little endurance climber. Ben's got me psyched for a summer of working together on hard things up in the northlands...

I eased up on climbing just a bit during my days with Ben, Tony, and Heather. It was good to give the body a break. Wednesday before Thanksgiving I packed everything up (save for my spices, sigh.) from Ben's place and hit the road to Bishop for a new kind of Thanksgiving.